Unlike practically every other naming convention in tech, graphics cards don't tend to follow on nicely from one generation to the next. The new Nvidia GeForce RTX 2060, for example, may seem like it should be the natural next step from the previous generation's GTX 1060, but as we saw in last week's RTX 2060 vs GTX 1060 comparison piece, the RTX 2060 is really in a whole other league of its own when it comes to performance at 2560x1440 resolutions.

Really, it's a much better match for the the next card up in Nvidia's GTX 10-series, the GTX 1070, which I agree makes very little sense and is confusing for everyone but that's just the way these things are unfortunately. With that in mind, here's how the RTX 2060 stacks up against the GTX 1070 via the medium of some nice graphs.

Just like my RTX 2060 vs GTX 1060 article, I've tested each card with pretty much every game I currently use as part of my general benchmarking suite: Final Fantasy XV (albeit without Nvidia's fancy HairWorks, TurfEffects, VXAO and ShadowLibs effects turned on), Monster Hunter: World, Shadow of the Tomb Raider, Assassin’s Creed Odyssey, Total War: Warhammer II, Forza Horizon 4 and The Witcher III. Paired with my Intel Core i5-8600K CPU and 16GB of RAM, I've seen what each card can do on max settings at 1920x1080 and 2560x1440 resolutions, as well as what's possible on Medium graphics settings at 4K (because let's face it, apart from a couple of exceptions neither card is really cut out for anything more demanding).

The cards in question are the Nvidia Founders Edition of the RTX 2060, and Asus' ROG Strix GeForce GTX 1070, the latter of which is one of the faster GTX 1070s around thanks to its high base and boost clock speeds of 1632MHz and 1835MHz respectively. This should give us a pretty good idea of how the RTX 2060 compares with the very best GTX 1070s out there right now, but I also want to include a small personal note before we dive into all those lovely graphs I've prepared for you below.

This GTX 1070 is actually the very card I bought myself around three years ago - or rather I bought it for my now husband and fellow RPS video bud Matthew as a Christmas present so he could finally play his favourite game The Witcher III at 60fps on max-ish settings at 2560x1440. Or at least that was the hope. I'd built him a PC with a GTX 970 in it the previous year, but that really wasn't up to the task of running Geralt's wafting HairWorks locks at anything other than 1080p.

That, I decided, wasn't good enough, not when we had a nice 2560x1440 monitor at our disposal, so I took the plunge and stumped up the cash for a GTX 1070 the year after. The GTX 1060 wasn't going to do the job, the GTX 1080 was way out of my price range, and the GTX 1070Ti didn't exist yet, so I crossed every finger and toe that the GTX 1070 would do the trick. And it was fine, for the most part, but it still wasn't quite powerful to do The Witcher III at the speed I wanted on its top Ultra setting. That was disappointing, and we've both had small niggles with it ever since.

Don't get me wrong, the GTX 1070 is still a great card, but as you'll see below, the RTX 2060 is something else entirely. And for a lot less money to boot, too. 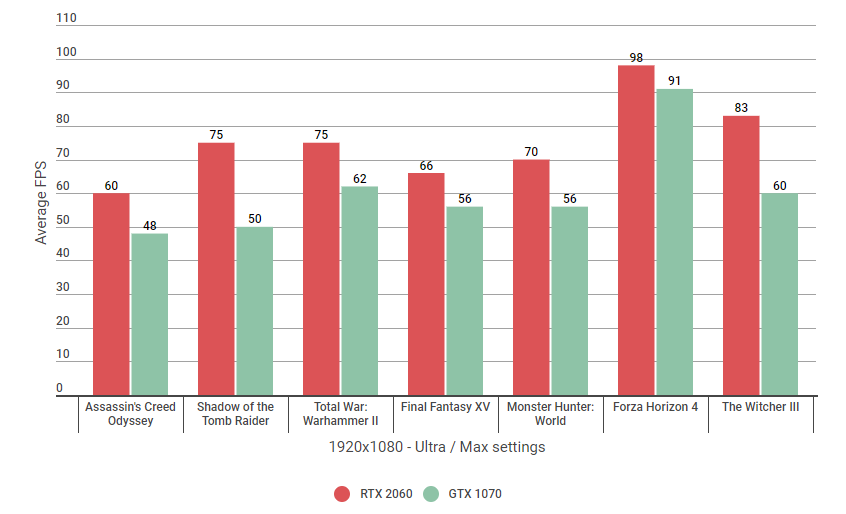 When it comes to playing games at 1920x1080, both the RTX 2060 and GTX 1070 have more than enough power to get a smooth 60fps with practically zero compromise in the old graphics settings department. The GTX 1070 is starting to show its age a bit with some of the newer games on my benchmarking test sheet, such as Assassin's Creed Odyssey and Shadow of the Tomb Raider, but the tweaks I had to make to get them back up to full speed were minimal to say the least. The former ran perfectly well on the game's still lovely-looking Very High graphics setting option, while the latter only needed a small change to its anti-aliasing options.

Otherwise, you're not really gaining much by opting for the RTX 2060 here unless you own a high refresh rate monitor - in which case, you're gaining a lot. Hitting at least 60fps in every game on test, the RTX 2060 is a fantastic partner for those with 75Hz refresh rate screens or above, as it means you can get all those lovely extra frames while still having your games look absolutely fabulous in the process.

That said, it's worth pointing out that, while the GTX 1070 is still a perfectly good card for 1080p gaming, the RTX 2060 is likely going to offer better future-proofing against even more demanding games further down the line. Sure, you don't have to do much to Tomb Raider and Assassin's Creed to get them running at 60fps at this resolution, but those tweaks are only going to get bigger and more compromising as the years wear on. If gaming at a flawless 60fps is important to you, the RTX 2060 is the safer, wiser choice in this respect - even if some GTX 1070 cards can be found for a fraction less than current RTX 2060 prices. 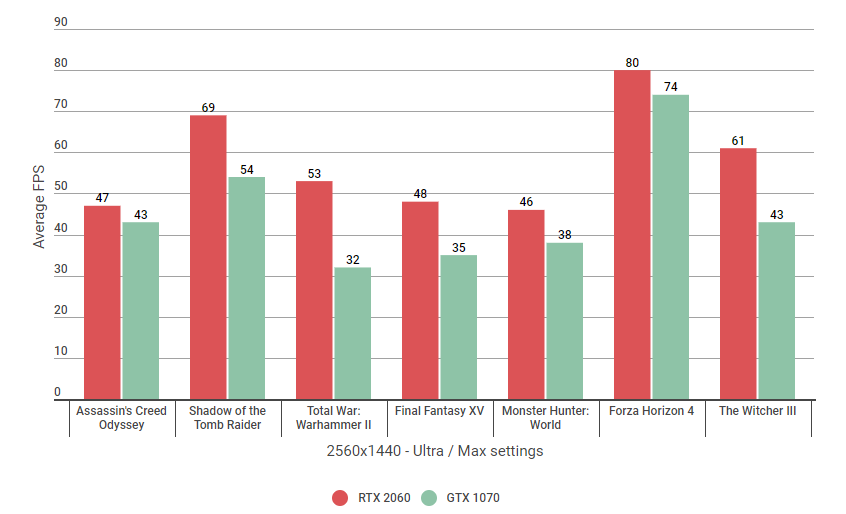 It's not just 1080p gaming where the RTX 2060 shines brightest, though, as it's also considerably more capable at 2560x1440 resolutions as well. I should note the Shadow of the Tomb Raider results here are with its far less taxing SMAA anti-aliasing option enabled instead of its crazy demanding SMAA x4 as per the 1080p graph above (apologies for this and my lax data collection when I compiled my Shadow of the Tomb Raider graphics performance guide), but I think you'll still agree that the RTX 2060 offers some astounding gains here - up to a massive 65% in Total War: Warhammer II, for example, and an impressive 37% in Final Fantasy XV.

The GTX 1070, on the other hand, languishes around the all right but very close to unplayable 30-40fps mark in a lot of cases here, which is kind of disappointing when a lot of these cards currently cost north of £400 / $420. As mentioned above, there are a couple of outlying cheapy GTX 1070 cards available at the moment, but really, even the £320 I spent back in 2016 felt like it should have gone further than, say, an average of 43fps in The Witcher III.

This is why I said current GTX 1070 should consider upgrading to the RTX 2060 back in my review, as this can actually do 60fps in The Witcher III and thus solves one of my major problems with playing games at 2560x1440. Now, I appreciate that some games here offer barely any noticeable improvement over the GTX 1070, such as Assassin's Creed Odyssey and Forza Horizon 4, and that even the 8fps improvement in Monster Hunter: World isn't really anything to shout about much. I get that. But if, like me, you're looking to buy a card to play a specific game at the best it can possibly be, sometimes that 10-15fps improvement is the thing that pushes you over the edge from, "Hmmm... should I really spend this much?" to "Yes please, thanks very much."

Yes, you probably only need to drop the GTX 1070 down another graphics preset to get that silky smooth 60fps back, but with more games such as Final Fantasy XV, Total War: Warhammer II and Monster Hunter: World pushing those requirements down to Medium or Average settings at 1440p, the GTX 1070 is clearly entering its twilight years as the mid-to-high-end graphics card of choice. As such, whether you're looking to buy a new 1440p off the bat or upgrading from your current 1440p card, the RTX 2060 is without doubt the one that strikes the best balance between price and overall performance. 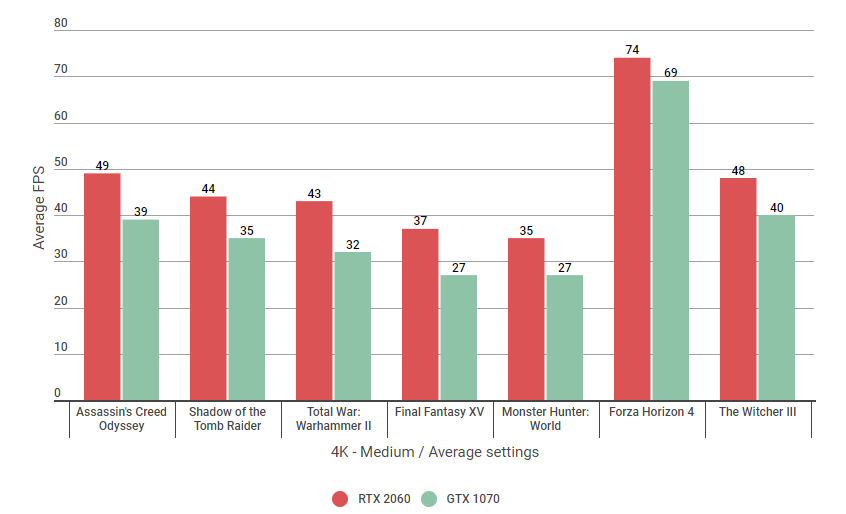 You're probably not thinking about buying an RTX 2060 for playing games at 4K, but let's have a graph about it anyway, because as you can see, it's actually pretty capable as long as you keep your expectations in check. While it's not going to produce blisteringly fast frame rates in anything other than Forza Horizon 4 out of today's big blockbusters, it's certainly got a lot more oomph than the GTX 1070, which borders on being unplayable in most cases, and only just about serviceable in others. Sure there's always option of whacking everything down to Low, but if you've seen what Low looks like in Monster Hunter: World and Final Fantasy XV (that is, utterly awful), you'll know that Average or Medium settings is really as 'low' as you want to go when it comes to overall quality.

The RTX 2060 also struggles in some games, of course, but averages in the 40-50fps zone aren't too shabby either when you think about it, especially when doing 4K properly (i.e.: closer to 60fps) at these graphics settings would require you to spend almost half as much again (if not more) to get something like the GTX 1080 or RTX 2070. Really, you're looking at the £700 / $750 RTX 2080 or higher if you want smooth, 60fps-level frame rates at higher graphics settings at 4K, which simply isn't within reach for your average PC peep, so to even get playable frame rates on something as cheap on the RTX 2060 is really quite something in the grand scheme of things.

I know it might sound mad to say current GTX 1070 owners should consider upgrading to the RTX 2060, but think of it this way. Unless you also foresee upgrading to a 4K monitor any time soon, the main resolution you're most likely going to be targeting with this card is 2560x1440, which, as we've just seen, the RTX 2060 is perfectly suited for. The GTX 1070 is still a great card that can deliver 60fps frame rates at either max or High quality settings at this resolution, of course, and for a lot of people it will probably continue to suit them just fine for many more months to come, too - especially if you're not playing the latest and greatest blockbusters.

However, if you're someone that demands the best at this resolution and, like me, are currently unsatisfied with the performance of your GTX 1070, then the RTX 2060 is the next and only logical step that doesn't also involve you re-mortgaging your entire house in the process. Yes, we've come to think of Nvidia's xx60 card as the affordable mid-range option when it comes figuring out the best graphics card for 1440p, and I appreciate that £320 / $350 is neither 'affordable' or, indeed, 'mid-range' any more.

But it's also important to remember that we haven't had the inevitable RTX 2050 yet, which will almost certainly be the GTX 1060 replacement everyone's been crying out for - that is, excellent 1080p performance plus a little bit of 1440p for a much more agreeable price point somewhere around the £200 / $250 mark. The RTX 2060, on the other hand, sets its sights much higher, giving for those who want near-to-perfect 1440p performance at the highest possible settings without breaking the bank. For me, that's a compelling enough argument to warrant an upgrade suggestion, and it's almost certainly the card I'll be getting Matthew come Christmas time so he can finally play the Witcher III at 60fps on Ultra in all Geralt's HairWorks'd majesty, provided AMD don't suddenly release their next-gen Navi GPUs in the mean time with something that completely blows the RTX 2060 out of the water for a similar or lower price, of course.

I'm not saying all GTX 1070 owners should suddenly rush out and buy an RTX 2060, but if you are contemplating a new graphics card and have the budget for it, the RTX 2060 should absolutely be top of your list.