Greg Kythreotis and Daniel Fineberg make up Shedworks, a game development studio with four years experience in the industry. They're both self-taught and, as the name suggests, they conduct their work out of Greg's parents’ shed in North London.

At E3 this year, both Greg and Daniel took the stage to present their game during The PC Gaming Show. Unlike anything else seen at this year's expo, Sable's dreamlike world and wonderful art style stood out, and its trailer inspired instant fans. From the comfort of his family garden, Greg talked to me about Sable's wide spectrum of inspirations, the struggle to convey the point of an abstract game, and what the player can expect from Sable.

Starting out from a background of architecture and literature, graduates Greg and Daniel taught themselves how to program and later took up contract work making free-to-play mobile games. This year-long process was to create the necessary time to work on a passion-driven project they already knew they had to create. "We had loads of little ideas and concepts, but this was one that stuck in our heads for a long time."

Sable entered development in April 2017, and Greg tells me that the idea has one of its roots in an alternate plot thread for 2015's Star Wars: The Force Awakens:

"Consider When Rey is on Jakku in the first five minutes of the movie... what if she never left?" 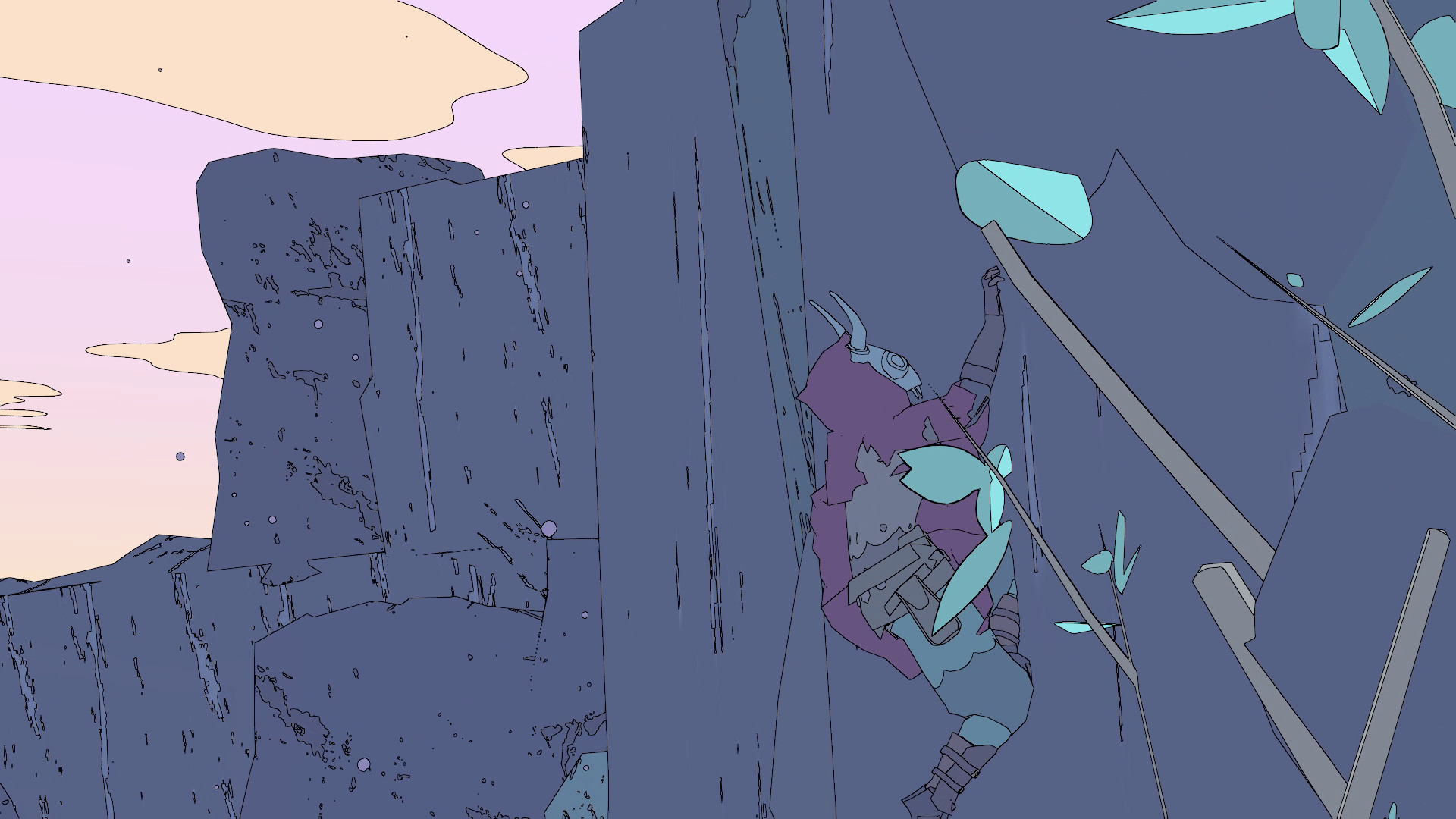 A simple but instantly compelling hook. Greg tells me they weren't sure what to do with the idea, but they knew that they wanted Sable to be a game about exploring a vast desert, looking out and observing things and choosing to travel to and discover them. The initial prototype was a $5 asset store test with a sand dune material, a hoverbike and a cube. Greg and Daniel started tinkering with the idea and pitching the project to publishers.

The first and most crucial snag for Greg was in communication. "We didn't really know how to talk about the game for a long time," he tells me. "We'd always get the question of "So, what do you do?" "(In Sable) you don't fight things, and it's not a survival game. Saying its a narrative game but you don't have the narrative or saying you just explore spaces, but you don't have any spaces... it's not that convincing. We had no quick shorthand to describe what the game was."

The eureka moment in understanding Sable came from GIFs posted to Twitter during development. Greg and Daniel's work-in-progress vignettes started to gain traction, putting Sable in the eye line of now-publisher Raw Fury. Greg attributes this to the unique visual style of Sable. They hadn't seen anything exactly like the cartoony, line-art aesthetic before, and something they felt passionate about realising. Whilst they had seen the framework of an open-world exploration title in other games, applying Sable's visual style was a huge technical hurdle, and something they had little reference for in games. "If we couldn't work out the visuals, it simply wouldn't have worked. It was an unanswered question that we had to answer." 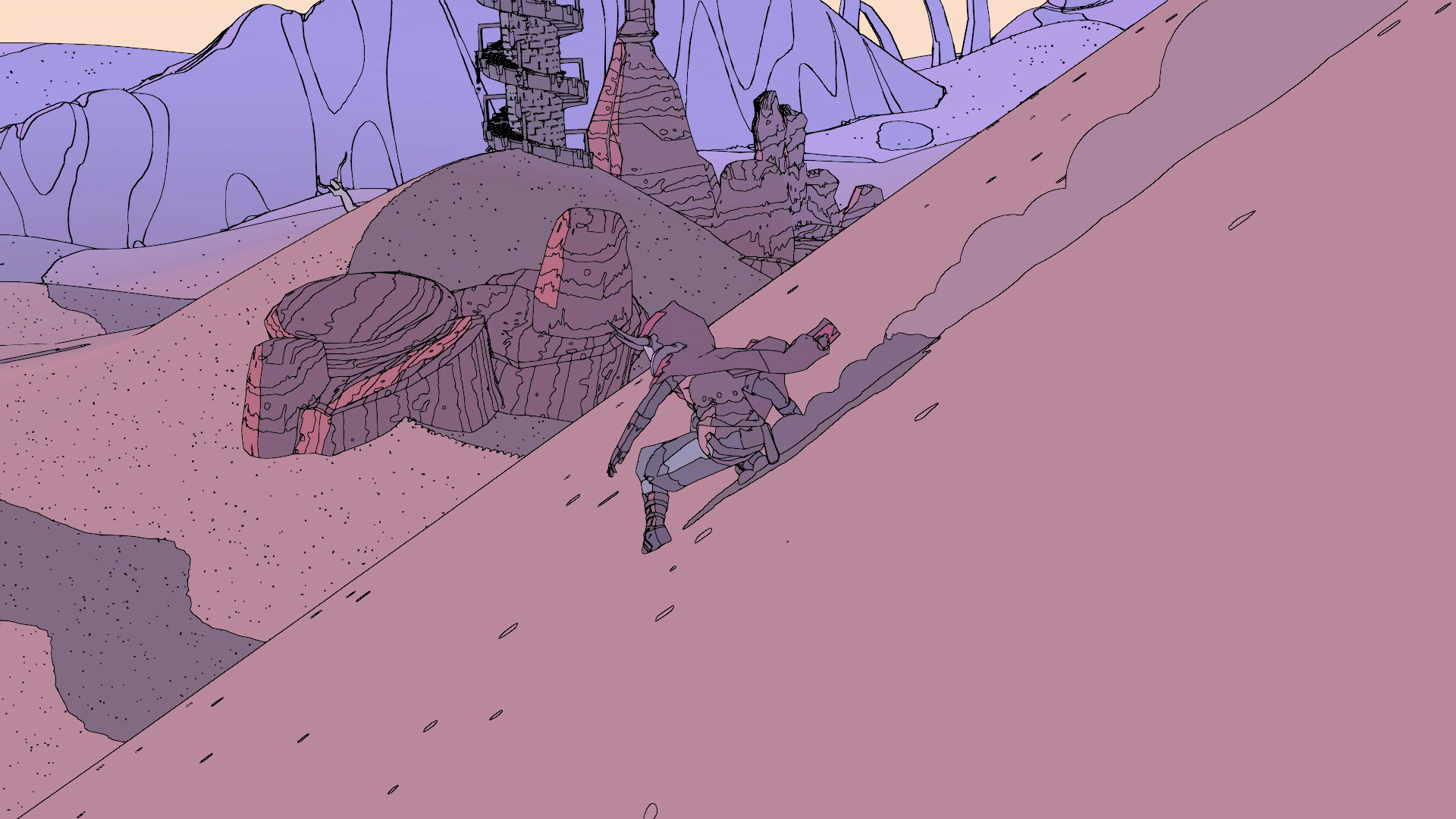 The evident inspiration is Studio Ghibli, with Greg noting Nausicaa of the Valley of the Wind and Princess Mononoke as the primary inspirations behind the idiosyncratic style. Prior to development, Greg took a trip to Japan for a family wedding and whilst exploring Tokyo he visited the Ghibli museum, which he cites as a life-changing experience. "I have this amazing reference book with all the line drawings. I still read my notes from that and think about the experience a lot."

Influence is particularly drawn from Studio Ghibli's ability to make their animations look beautiful in motion, something Greg and Daniel are always using as a muse to get Sable's art style looking good within the technically difficult medium of a video game. I told Greg about my girlfriend's reaction to the trailer. A huge fan of Studio Ghibli but not well versed in the world of video games, she instantly wanted to check out Sable. Greg told me that this was a common and exciting reaction to their passion project. "Something that's been uncovered for us is that people who aren't necessarily interested in video games normally really engage with Sable. If we can get people who don't play video games playing our video game, that's motivating for us to craft something to make them stay around and enjoy it."

Greg also looks to his roots in architecture for inspiration, drawing from paper or visionary architecture - fantasy projects never meant to see the light of the day. Neofuturist designs seen in the Archigram movement and the post-war work of the Japanese Metabolists are crucial inspirations for him, as well as Italian architect Carlo Scarpa's "Modernist ruins."

The open world scenery of Sable also takes inspiration from the styles of music the team listens to, with Greg noting Earth, Circa Survive and Japanese Breakfast as bands that create musical landscapes that influenced Sable's direction. After the developers started out as fans of the band, Japanese Breakfast has now signed on to soundtrack Sable, and scored the sonically gorgeous E3 trailer.

Greg uses a huge Pinterest board to refine his aesthetic and keep all of the aforementioned influences in check. "I grab well over a couple thousand visual references and start to refine what I would like something to look from all of the noise. I feel it's important to acknowledge that it doesn't come from nowhere, we're always looking and building off the backs of giants."

Greg agreed with my suggestion that Sable could be seen as a learning experience. "The essence of exploration is learning about a character, place or culture." He tells me this is why Shedworks is hesitant to show much of the game on social media. "We want people to go in being excited to learn and discover. Discovery is at the core of [Sable]."

This is mostly down to its proposed structure, which invites a different experience for each player. "The way we're structuring the game is as a series of short stories, and they're all disconnected," Greg tells me. The plan is to have players looking into the distance across the desert and finding something that catches their eye. Greg cites games like Sunless Sea and 80 Days as inspirations for its structure. "The order that you experience things should have an impact on your perceptions of a particular person or place in the world of Sable. Your friend might have gone to the same place as you and have a completely different understanding of it." 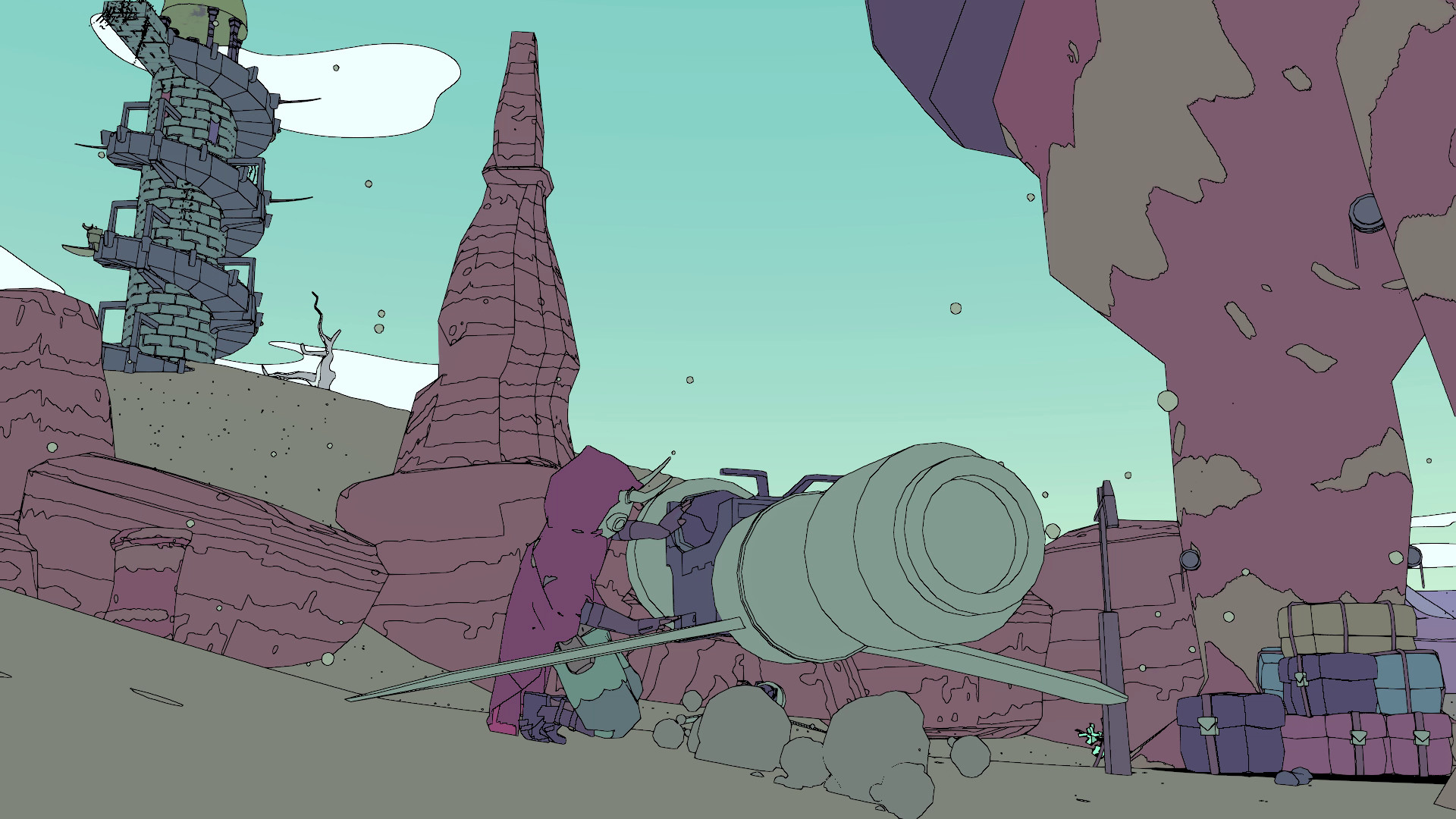 Through this, Greg and Daniel want to capture and endorse a wondrous part of the games of their childhood. "Inputting a certain sequence of buttons to get a Pokemon, or jumping behind a waterfall in Tomb Raider to find a secret level..." Greg reflects fondly on these moments of nostalgia, and wants to instil Sable with "rumours and whisperings of places from people within the world, and the joy is in figuring out if [the rumour] is true or not."

Even in its myriad of influences, Sable appears to be exploring new ground within its medium, exposing pockets of the past and opening up new avenues for exploratory storytelling. As well as looking unique, Greg believes that, at its core, Sable is going to be a relatable experience for anyone who's gone through the tribulations of "coming of age."

"The story of Sable is about pilgrimage and learning, its something everyone on this planet goes out to do at a certain of age. In that way, your character isn't special, she's just doing something that everybody does.