As I continue my coughogeddon-inspired journey into comfort gaming, my next intended destination was Day Of The Tentacle. I've always loved it, ever since my dad bought me the prism-shaped box it so ridiculously came in. I've replayed it so many times, most recently four years ago when the Remastered version came out. (FOUR YEARS?) I adore it. But as I started it up, and started solving the puzzles before they were introduced, swapping in left-handed hammers to reverse statues in rooms I'd not even visited, saying lines before they were delivered, I realised perhaps I've reached the maximum number of plays a game can have? Uh-oh. So I pulled the emergency cord and booted up Sam & Max: Hit The Road.

It's not like I haven't played LucasArts' other 1993 masterwork a bunch too. I'm the sort who finds it hard not to respond to "Mind if I drive?" with, "Not if you don't mind me clawing at the dash and shrieking like a cheerleader." But as I remain reeling from the fact that it's four stinking years since DOTT was remastered, it's probably over a hundred since I've returned to S&M. 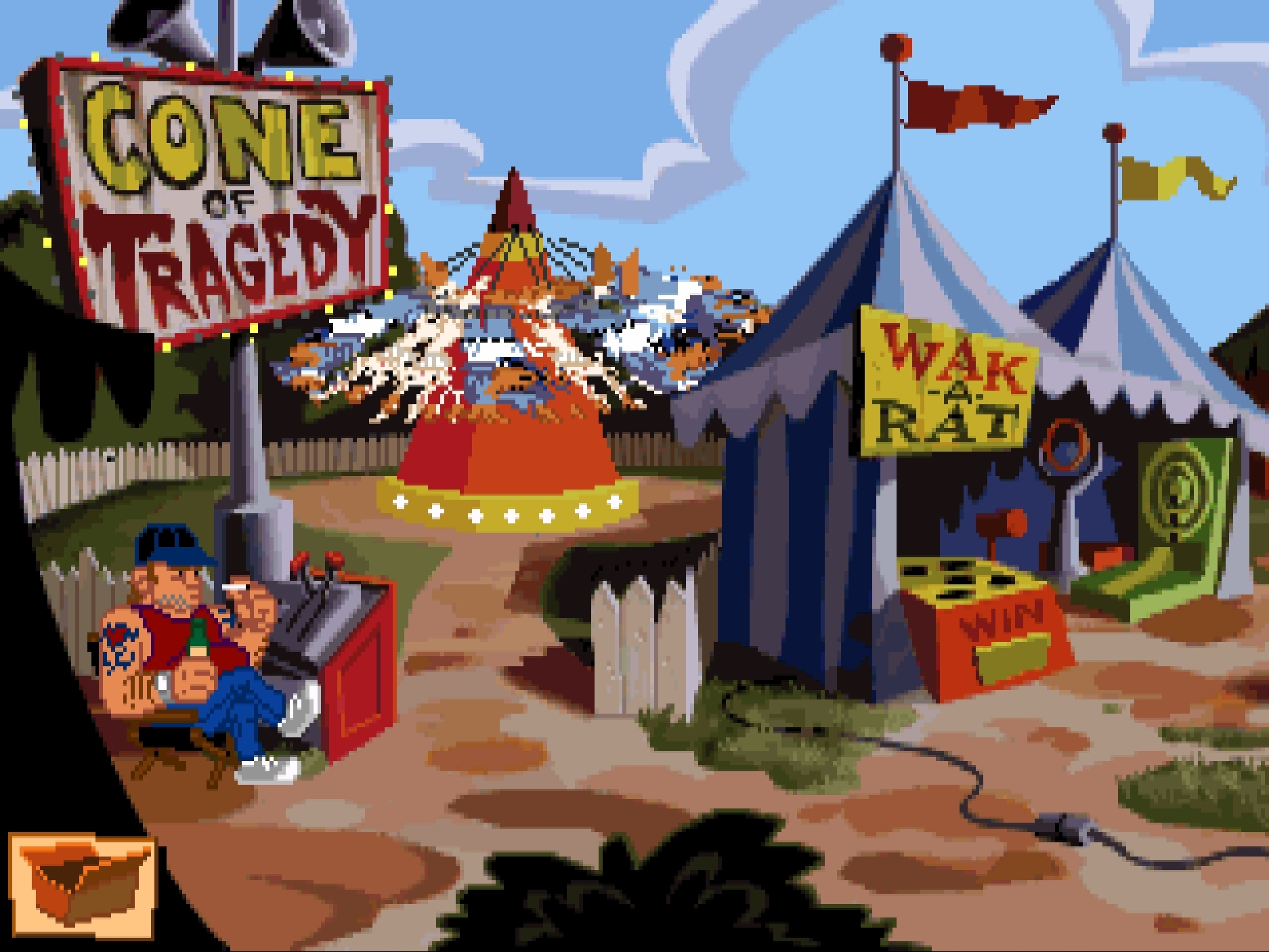 I must confess that another part of my reluctance to choose Sam & Max over DOTT is because of an older rivalry. Since the dawn of time, Alec Meer (RPS in peace) and I have argued over which is the better of the two games. I've correctly maintained it's Tentacle, while he's wrongly persisted in incorrectly believing it to be Hit The Road. This is a row that's gone as far back as PC Gamer Top 100 meetings in the early 2000s, and extended to the latter days of our time at RPS. This sort of feels like affirming his faulty opinion.

So to absolve me of this responsibility, I showed the opening of both games to my five-year-old, wondering if he'd find them funny. He sort of pretended to, I think, both going over his head, but definitely clicking more with the dog and rabbit. DOTT is a lot of grown up words in grown up sentences, whereas S&M is cartoon characters hitting each other and pulling people's heads off. And calling people "stupid", and "idiots", and shooting guns, and oh crap I shouldn't be showing this to him at all. Fortunately tea time intervened, and I'd played enough Sam & Max to remember I didn't remember everything, at least not word for word. Oddly enough, this made it feel the more comforting place to play, because it would be more involving as I recalled it all, rather than just knew its every hand gesture and tonal beat. 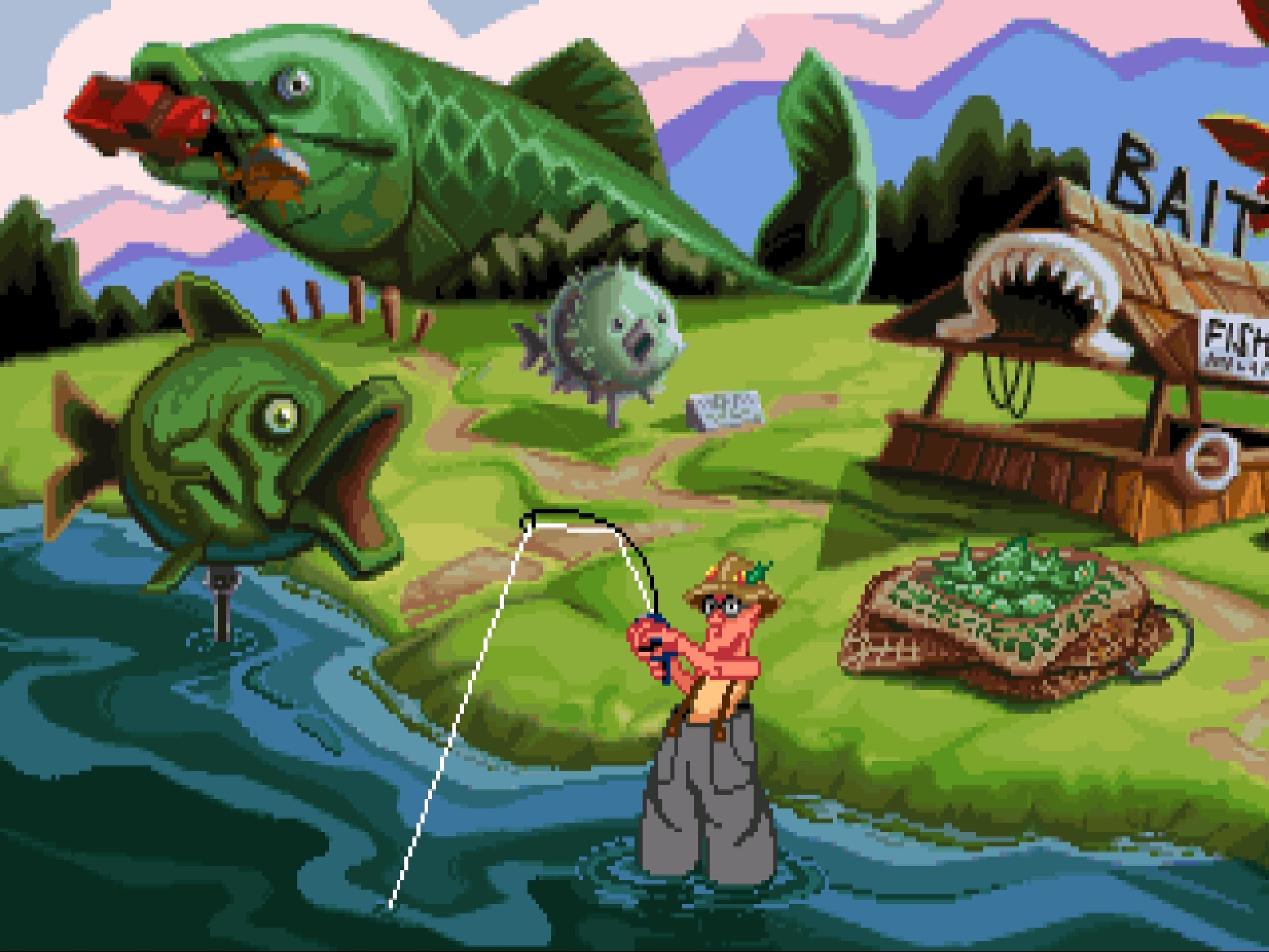 Of course, my realising it just wasn't appropriate for my boy was another aspect that had made Sam & Max such a treat to my 15 year old self in 1993. It was a bit naughty! They said "crap" a whole bunch, and there's that one tool-bending guy whose swears are bleeped! It had that same frisson of excitement that came from Ren & Stimpy at the same time, the idea that it was subverting and rebellious, a cartoon that wasn't for children. Now, aged 42, in an era when rude swears are commonplace in mainstream games, that edge is perhaps somewhat filed down. But I still managed to capture a little bit of it by realising my kid was asking me why they were saying "stupid" so much.

And then it was down to the important business of helping this pair of freelance police track down the missing Bruno, a formerly iced bigfoot escaped from a carnival. Presumed to have kidnapped Trixie The Giraffe-Necked Girl, Sam and Max must traipse across stretches of the United States, following their trail across a series of increasingly unlikely tourist destinations. And wise-cracking all the way. 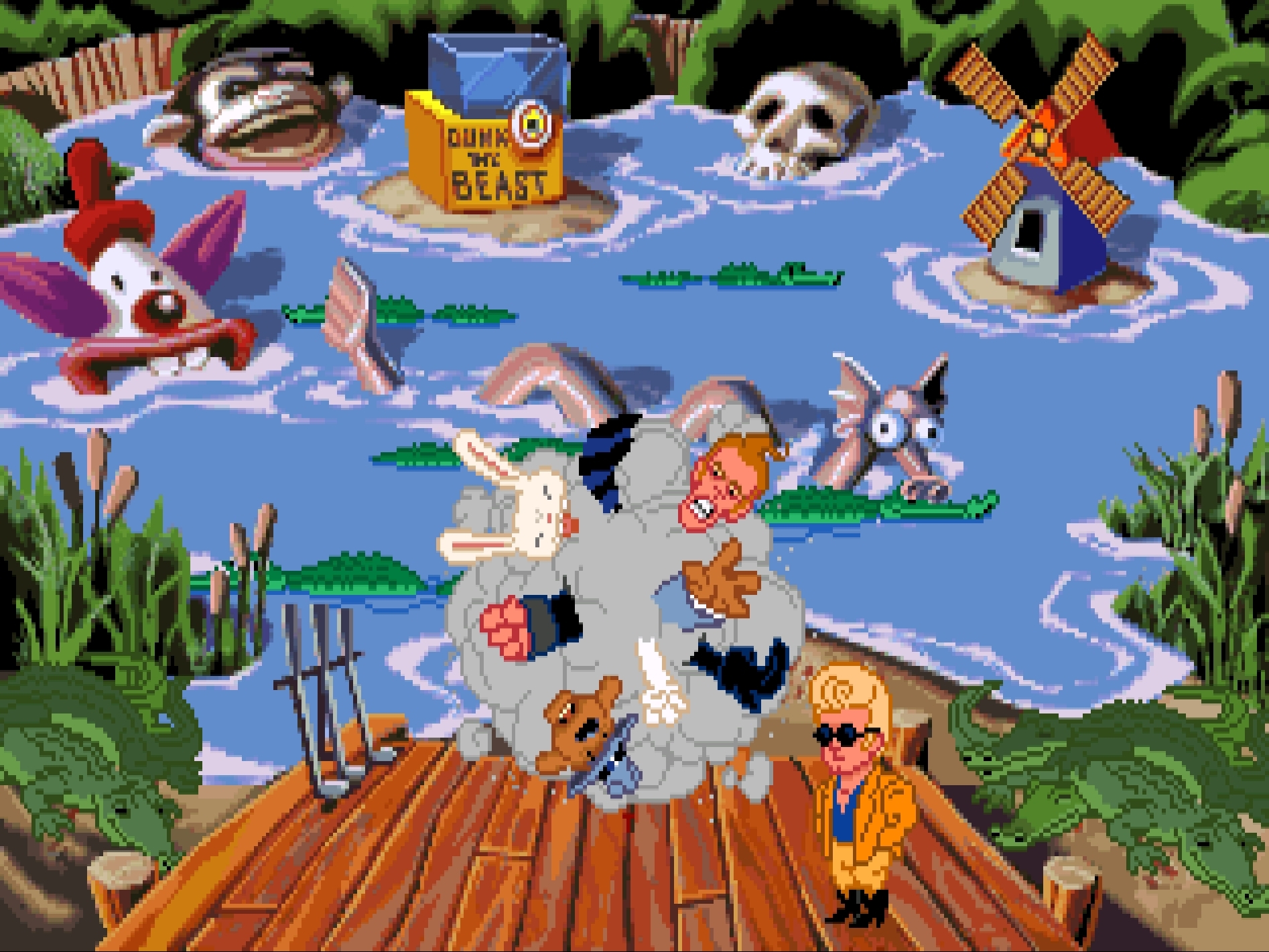 Everyone already knows that Sam & Max was already a comic strip drawn by artist Steve Purcell, who had already worked at LucasArts a while before his creations became the focus of one of their best games. Together with Sean Clark and Mike Stemmle, they crafted a graphic adventure that one is required to describe as "anarchic", which I think always undermines the true craft and brilliant writing that make it so damned great. I mean, there's no other game that's come close to including lines like:

Fisherman: Is he in trouble?
Sam: That depends on your definition.
Max: I prefer to use the one that involves spiny echidnas.

Max's non-sequiturs are a constant source of amusement throughout, in a superbly well written game. But you know what surprised me most? How few gags there actually are, given the opportunities. 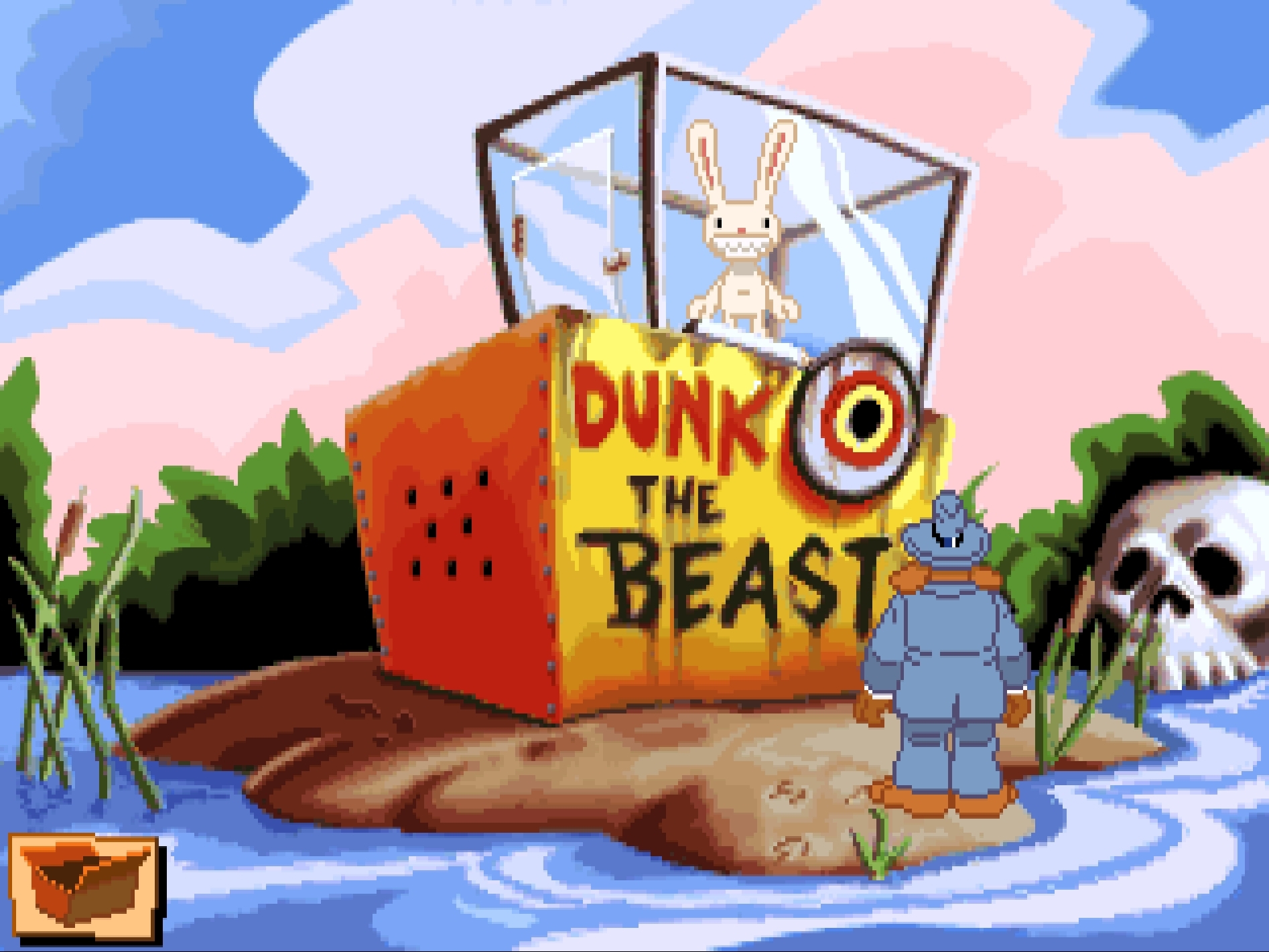 This is perhaps unfair. Hit The Road is a very funny game, and while its puzzles are occasionally poorly flagged, or just so esoteric that random guessing is required, there are many, many excellent moments. Not least a song. But there are also so very, very many objects, scenes, and potential puzzle solutions, for which nothing is written.

There are rooms packed with wonderfully drawn items, intriguing objects that beg to have a snarky Sam line, or Max barking something nonsensical about. And yet you can't even look at them. Take Doug's room, the secret control centre for the carnival's Tunnel O' Love. Look at it! 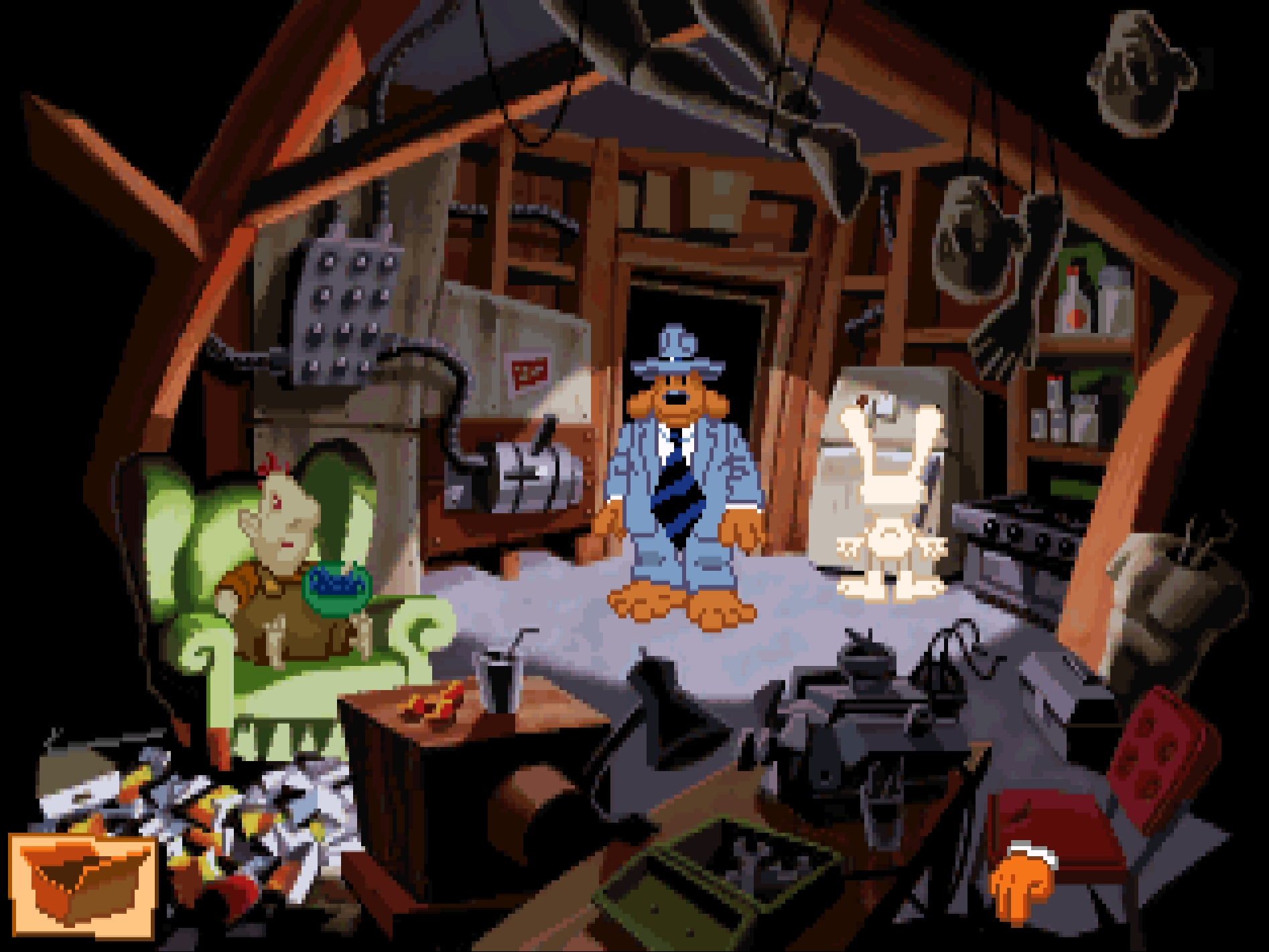 I want to know what's in those bottles! Hear thoughts about the creepy dangling mannequin parts! I'd love to know more about the tools on the table, or the vast pile of pizza boxes, or the contents of the fridge. And yet not a single one of those pieces of art is a hot-spot. They're just background. Excellent background by a team of splendid artists, but such missed opportunities.

My memory of these classic LucasArts games have been erroneously woven into those of the contemporaneous offerings from Sierra, where such detail absolutely was a part of the games. Grab yourself Space Quest IV and try to find a single object in any location that can't be looked at, used, sniffed or licked. I remembered Sam & Max being packed to the gills with gags, and yet instead it feels oddly empty in places, as if time ran out, or budgets were cut, and so much went unwritten or unrecorded. 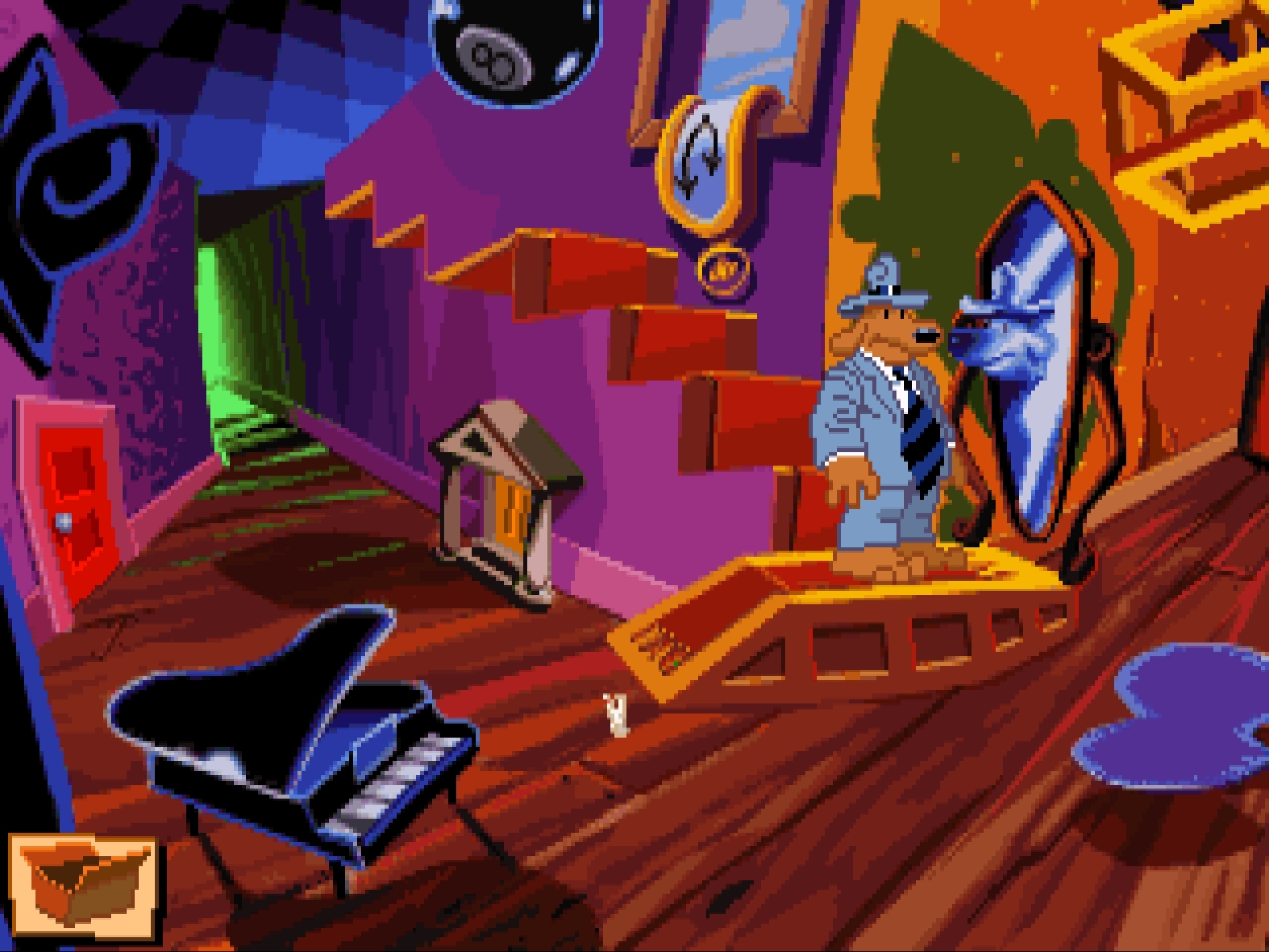 I think the other major factor that affects playing any graphic adventure almost 30 years later is our expectation of time. Even having literally grown up playing adventures, from text only to parser-based to verb-driven to cursor controlled, I find that now I'm so comprehensively reprogrammed to expect a contiguous experience that I cannot muster the patience to play these games as was originally intended: slowly over days or weeks. I would play these games, get stuck, wait until my dad got home from work to ask permission to call his friend Ted for help, and if Ted didn't know, wait until I could get a lift into town to look through the back sections of various games magazines' hints and tips sections. With that clue in hand, I'd then return to the game, make that progress, and then revel in newly opened locations, new conversation options to explore, new puzzles to pick away at.

Now I just expect the next move to be clearly flagged, deducible without random experimentation. And it's really hard not to find the games themselves at fault for not offering this. Surely it's bad game design to not have provided the information necessary to know the next correct move for solving a puzzle? I mean, it absolutely would be now. No one would fault a reviewer for calling a new game out on that. And yet, in 1993, it was not just an expected flaw, but a welcomed feature. 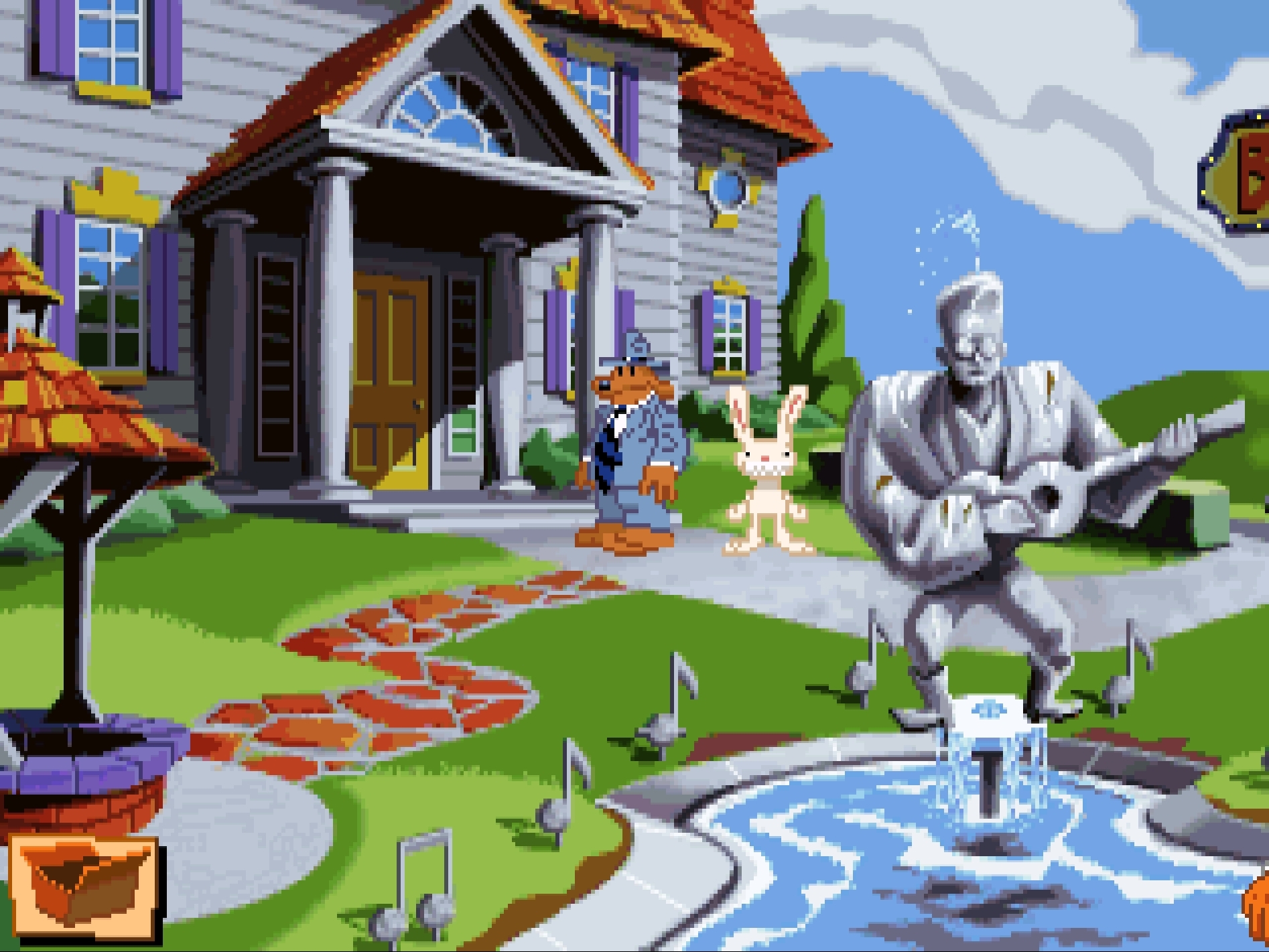 It's so strange to realise that this genre that was so formative for me, such a deeply embedded part of my psyche that the word "exam" means to "look at" in my head, is now so detached from what I want from a game. It's kind of sad. Which wasn't the idea of returning to favourites like this! I came here for comfort, not alienation!

Still though, it's very funny. And incredibly silly. I love that its sprawling storyline makes barely a lick of sense, that after the opening scene there's no reason to ever return to Sam and Max's office, that you hurtle all around the United States to visit imaginary tourist spots with the long-term goal to inadvertently destroy most of the country. I love Max's inane asides, that were so teeth-clenchingly awful in the Telltale reboots, but so perfect and bizarre still here. And of course I adore the art, which is LucasArts at their very silliest, yet so lovingly hand crafted.

Day Of The Tentacle is definitely still the better game. I know this because I've always known it. But also because its three-layered time travel story, and as such its time travel-based puzzles, are all far more sublime than anything offered here. But Sam & Max, as out-of-date as the genre it co-pinnacled might feel, remains a joyful festival of daft ideas and wonderful one-liners. 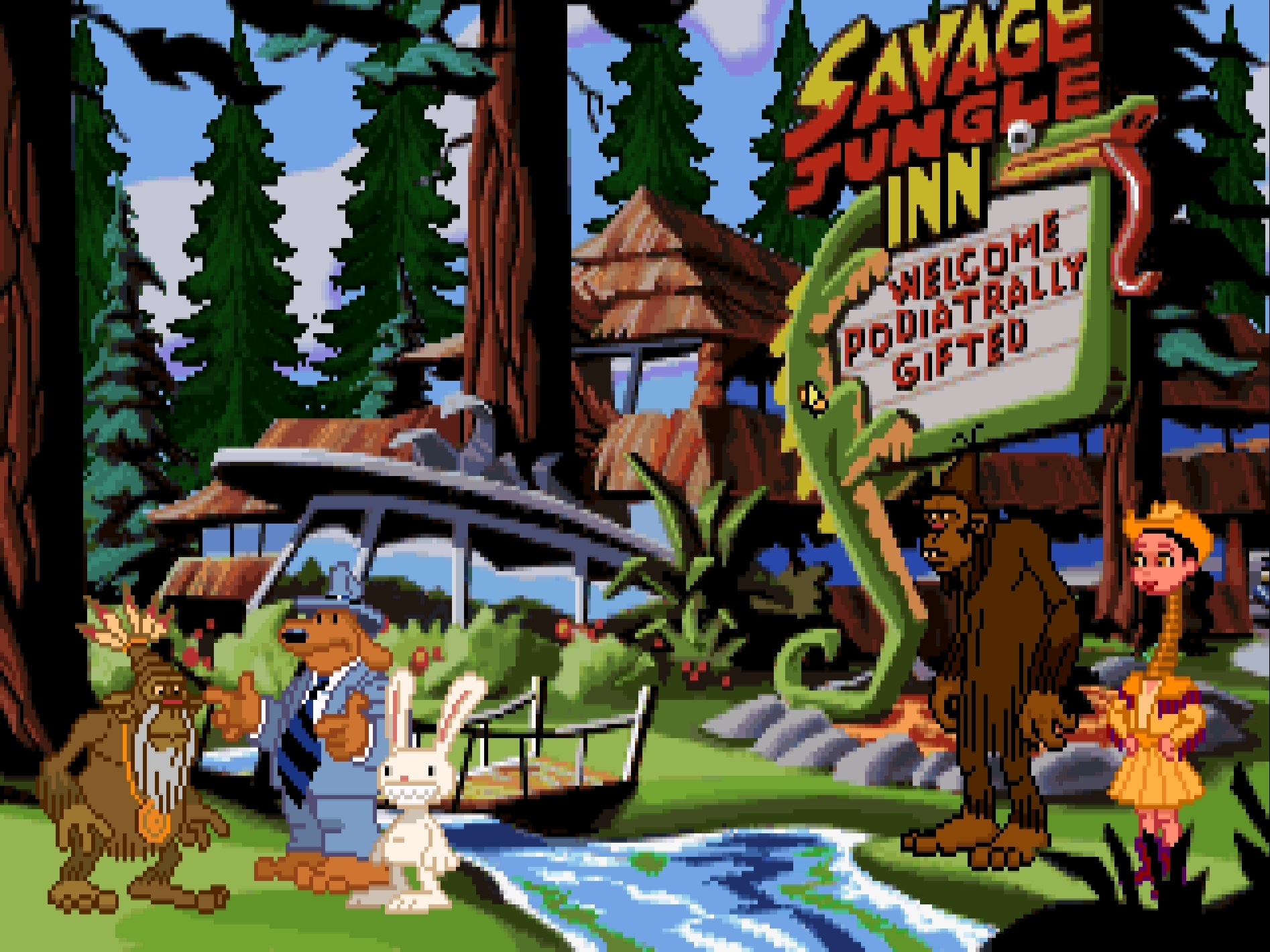 Can I still play Sam & Max Hit The Road?

Yes indeed. Either the Steam or GOG version works exactly the same, both running in SCUMMVM, and both costing exactly the same - $6/£5ish. You can stretch the 4:3 game to any size window, meaning its gorgeous art will fill your monitor top to bottom without issues, if not side to side.

Should I still play Sam & Max Hit The Road?

Gosh, if you never have, then oh my goodness yes. Fully intend to have a walkthrough if you don't have the patience of a '90s human. If it's been a while, as it was for me, then yes, this remains a pleasure to return to. Warning: might cause existential concerns about your changing mind.