The Samsung CRG9 is easily the most preposterous gaming monitor I've ever laid eyes on. It's not the sheer size of it that boggles the mind. Oh no. A diagonal of 49in and an aspect ratio of 32:9 is nothing after last year's equally large and equally wide CHG90 monitor. It's the resolution of the damn thing, which stands at a mad 5120x1440. That's the same amount of screen real estate as two normal 27in 2560x1440 monitors, which has been pretty much my dream setup since, well, forever. I like the single 4K Dell U2718Q monitor I normally have on my desk, I really do. But I'd swap it for two 1440p monitors in a heartbeat.

I love having two screens. It gives me all the space I need for having my emails open and all the different browser tabs I'm using, and there's still room leftover for other things like iTunes or Spotify or my trusty Calculator on my desktop without it feeling too crowded. Is the Samsung CRG9 better than having two separate monitors, though? Or does bunging them both together actually make it less practical in the long run? Here's wot I think.

First things first, a monitor of this size absolutely needs this kind of mad resolution. Last year's CHG90, for example, only stretched to 3840x1080 (effectively sticking two 27in 1080p monitors side by side), and it simply wasn't enough. Games looked fantastic, but text was noticeably fuzzy around the edges and the whole thing just wasn't sharp enough for a monitor that cost over a thousand quid.

Happily, the CRG9 rectifies that with a much cleaner, crisper 5120x1440 resolution, which looks fantastic spread across a panel of this size, regardless of whether you're playing games or creating the world's ultimate spreadsheet (and cor, does this thing do incredible spreadsheets). Its pronounced curvature radius of 1800R feels like the whole screen really wraps around your face, too. It dominated my peripheral vision in a way that other curved monitors have completely failed to in the past, and it's definitely one of the more immersive gaming screens I've ever had on my desk.

Naturally, having a monitor span the entire breadth of your field of view isn't always particularly practical. As I explained when I used it for playing Red Dead Redemption 2, HUD elements get shunted so far to either side of the CRG9 that I found myself constantly having to turn my head away from the centre of the screen to make sure I was pressing the right buttons.

The same goes for using it as a traditional desktop, too. Whereas I can normally position two individual monitors on my desk so both of them can be seen at a glance from my normal sitting position, the CRG9 is so damn wide and has such a prominent curve that I can only really look at half of it at once. If I'm concentrating on a couple of tabs over on the left-hand side of the screen, for example, the right-hand side is completely cut off from my field of vision, forcing me to turn my head back and forth like I'm watching a game of tennis.

One solution would be to centralise my main windows and have everything right in front of me, of course, but that, too, comes with its own problems. Windows' own window management shortcuts, for example, are next to useless because they're designed to snap things to the edge of a screen, and the monitor's own Picture-By-Picture mode is only designed to work with two different sources, not divvy up windows from a single desktop.

(The latter, I should add, could be immensely handy for streamers who want to run a game from their PC, say, while keeping an eye on Discord or other chat apps running off their laptop, for example, but you're also going to need a monstrous desk to fit everything on it. I tried using my laptop with the CRG9, for example, and there simply wasn't room for it unless I stuck it behind the screen or had it halfway closed underneath it.)

Still, while I'd hesitate about buying the CRG9 to use as my daily desktop monitor, its allure as a gaming screen is undeniable - at least for games that actually support it. I'll be doing a separate article on the very best games to play on stupid ultrawide screens like this in the next day or two, but as you may have gathered from that aforementioned Red Dead 2 piece, cor, what an experience.

Regular 21:9 ultrawide monitors have always been impressive in my eyes, but playing in 32:9 is something else. Provided you've got a powerful enough graphics card to power this many pixels (even my RTX 2080 Super struggles to play newer games on higher quality settings at 5120x1440), the effect is transformative. I'll be very sorry indeed when I'm no longer able to play Red Dead 2 in 5120x1440, but there are plenty of other games such as Abzu, Rime, Forza Horizon 4, Sea of Thieves, Assassin's Creed Odyssey and Final Fantasy XV that have also never looked better on the CRG90, and it's as if I'm seeing these worlds afresh for the first time. I thought I knew these games like the back of my hand, but seeing them in silly ultrawide screen makes a compelling case for revisiting them and playing them through all over again. I mean, just look at what we're dealing with here.

If that doesn't deserve an all-caps PHWOARRRR, I don't know what does. In fact, I'll tell you what. All that, but running at the CRG9's maximum refresh rate of 120Hz, because let me tell you, panning across wide, panoramic vistas at 120fps is truly a sight to behold - particularly when you enable its AMD FreeSync support as well to get rid of any pesky screen tearing and stuttering. You needn't fear if you've got an Nvidia graphics card, either, as despite not being one of Nvidia's officially sanctioned G-Sync Compatible monitors (yet, anyway) my RTX 2080 Super seemed to work perfectly fine when I switched it on in my Nvidia Control Panel settings, and I didn't see any evidence of tearing, flickering, brightness pulses or any of the other defects that can sometimes happen when a monitor isn't G-Sync compatible.

You will, however, need an AMD graphics card to make the most of its FreeSync 2 HDR support. You can still use an Nvidia graphics card to play games in regular HDR if a game supports it, but if a game has specific FreeSync 2 options (as many Ubisoft games do, for example), then that option will be greyed out - as it was when I tried running Assassin's Creed Odyssey in HDR on my RTX 2080 Super.

I must admit, I've been a bit cool on HDR monitors recently, mostly because they're usually an absolute pain in the ass to get working correctly. The CRG9, on the other hand, is probably the first monitor I've tested in ages that's just sort of... worked. And it's a revelation! Assassin's Creed Odyssey looked beautiful in HDR, with white hot sun rises piercing my vision with their 1000cd/m2 brightness levels and its autumnal setting bursting with life thanks to the monitor's superb colour accuracy and rich colour palette. Final Fantasy XV impressed as well, with its blisteringly bright and vibrant Lestalum nightlife coming to full and fantastic life onscreen, all without having to tweak a single setting.

It's a much greater sight to behold than last year's CHG90, which was also a FreeSync 2 HDR monitor, but whose max brightness only peaked at around 500cd/m2. With that figure now doubled, the CRG90 is arguably just as impressive as Nvidia's super duper G-Sync Ultimate screens such as Acer's Predator X27 and Asus' ROG Swift PG27UQ, which still cost closer to two grand rather than one. Of course, the number of games that fall into that tiny cross section of having both HDR and ultrawide support is still pitifully small, but when they do, man alive does it make the CRG90 feel like a worthwhile investment.

When games don't have ultrawide support, however, it can all look rather silly - and it's here where that desire to have two separate 1440p screens rears its head again. Indeed, much like you'd get on a normal 21:9 ultrawide monitor, the CRG9 forces you to make do with giant black bars down the side when a game only runs at 16:9, only here they're even more obvious and distracting due to their increased size. After all, you're effectively only using half the monitor in situations like this, which makes everything look a bit weedy and uninspiring when you're penned in by such huge gaping voids of black.

Still, when the CRG9's being used to its full potential, it really is quite a spectacular gaming screen, and I'll be sorry to pack it away tomorrow and ship it off back to Samsung. It is, probably, too impractical for everyday use, and a more sensible person would almost certainly be better off just getting two individual 1440p screens instead of this jumbo-sized mega beast. But where's the fun in that, eh? Where's the majesty? The drama? The sense of aspiration? The CRG9 is a piece of pure PC gaming theatre, plain and simple, and this greatest showman of over the top gaming screens really does deliver a visual extravaganza like no other monitor I've ever seen. 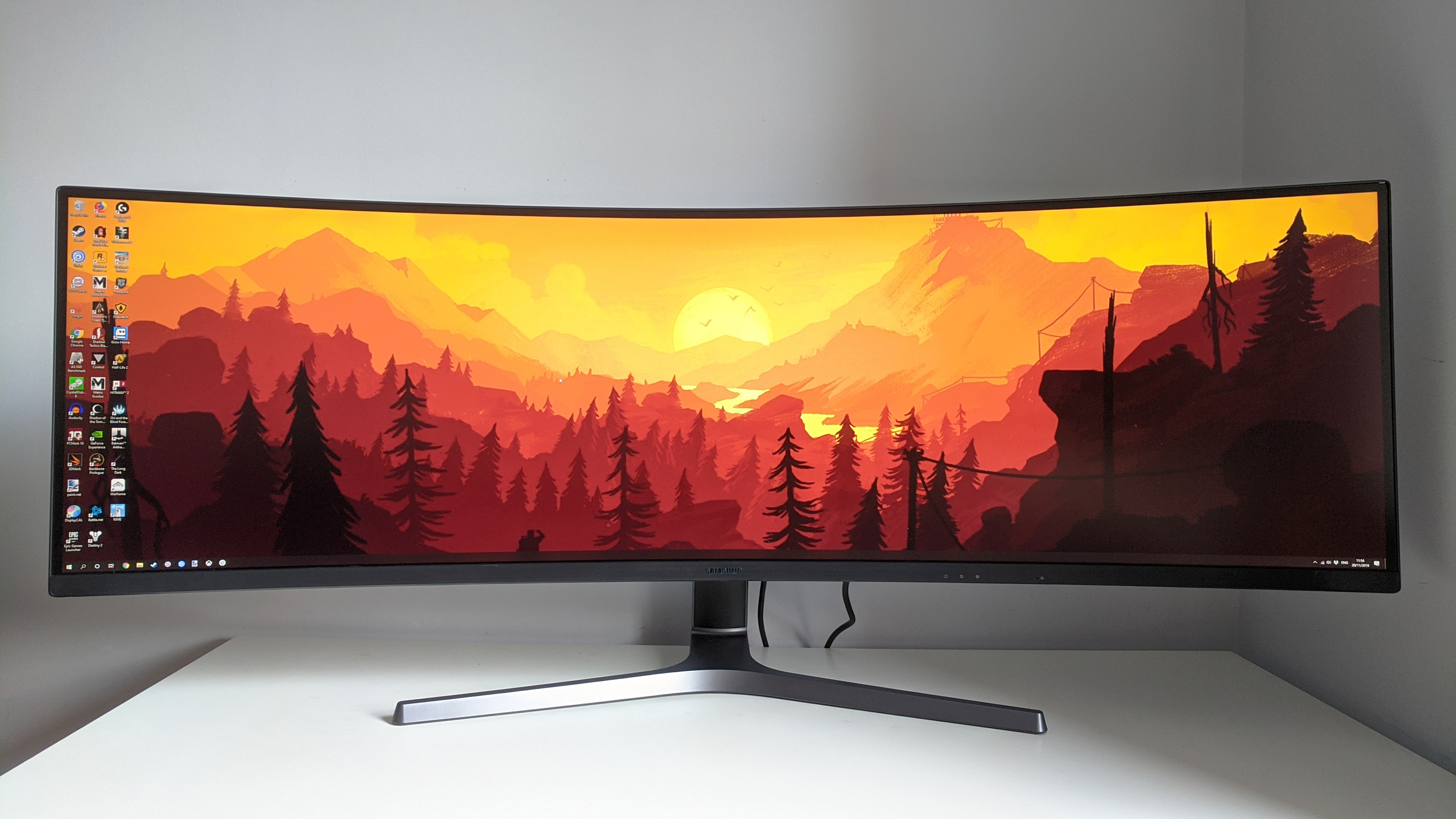 Before I finish, I suppose I should say something about its actual image quality, but needless to say, it's pretty much perfect straight out of the box. Out of its nine picture modes, I found RPG was the most accurate, displaying 98.5% of the sRGB colour gamut and a decent 85.2% of the HDR-grade DCI-P3 colour gamut (and that's without HDR switched on, I should add), but nearly all of them were up around the 97-98% mark anyway and barely any of them needed any settings tweaking whatsoever.

I was also impressed by its low black levels of 0.17cd/m2 (the closer to 0.00cd/m2, the better), and its peak (non-HDR) brightness level of 565cd/m2 packs plenty of punch. Combined with a lovely high contrast ratio of 2390:1, and the CRG9 dazzles even without HDR.

Yes, it costs silly money at £929 / $1300 (although that UK price is currently quite a bit lower than its normal asking of £1200 thanks to Amazon's early Black Friday-ish deals), but when you'd spend roughly the same kind of money on two decent 1440p monitors anyway, Samsung's CRG9 really isn't as much of an ask as it first appears. As I mentioned just a moment ago, a more sensible person would probably stick with two separate screens after everything I've said here. But let's face it, they'd probably also be a bit of a bore. You don't want to be that person. You want to be the mad deviant with a 49in 5120x1440 gaming screen on your desk because why the hell not. Embrace your inner lunatic and give in to the glory of this stupid ultrawide gaming screen, because I guarantee you will not be disappointed.