When a £300 / $350 gaming headset like the Sennheiser GSP 670 arrives on my desk, I expect breathtaking audio that blasts the waxy cobwebs clean out of my ear canal. I want, nay, demand perfection at this end of the audio spectrum, mostly so I can help feel justified in myself for spending such an obscene amount of money on a pair of headphones. I know this kind of cost is but a drop in the ocean for true audiophiles, many of whom happily spend upwards of a grand on their chosen bit of audio equipment (trust me, I used to test sound bars for a living), but in gaming territory, that's the kind of money I could use to buy a whole new CPU and motherboard, or an upmarket graphics card. It's a significant chunk of change, but I'm just not sure the GSP 670 does enough to persuade me to happily part with three hundred big ones.

Don't get me wrong. The GSP 670 is a great-sounding headset. Its large, leatherette ear cups provide fantastic noise insulation from ambient office sounds, for example, and that sensation of being cut-off from the world around you really lets you hear your music without any whirring or clacking distractions from your PC and keyboard.

Its audio is also crystal clear and perfectly balanced, handling the pumping soundtrack of Doom just as deftly as the delicate orchestrations of Final Fantasy XV. However, as much as I love a nice, even keeled soundscape, even the GSP 670 felt a bit too restrained for my tastes, as if it were constantly holding itself back instead of really letting rip and getting down into the nitty gritty. 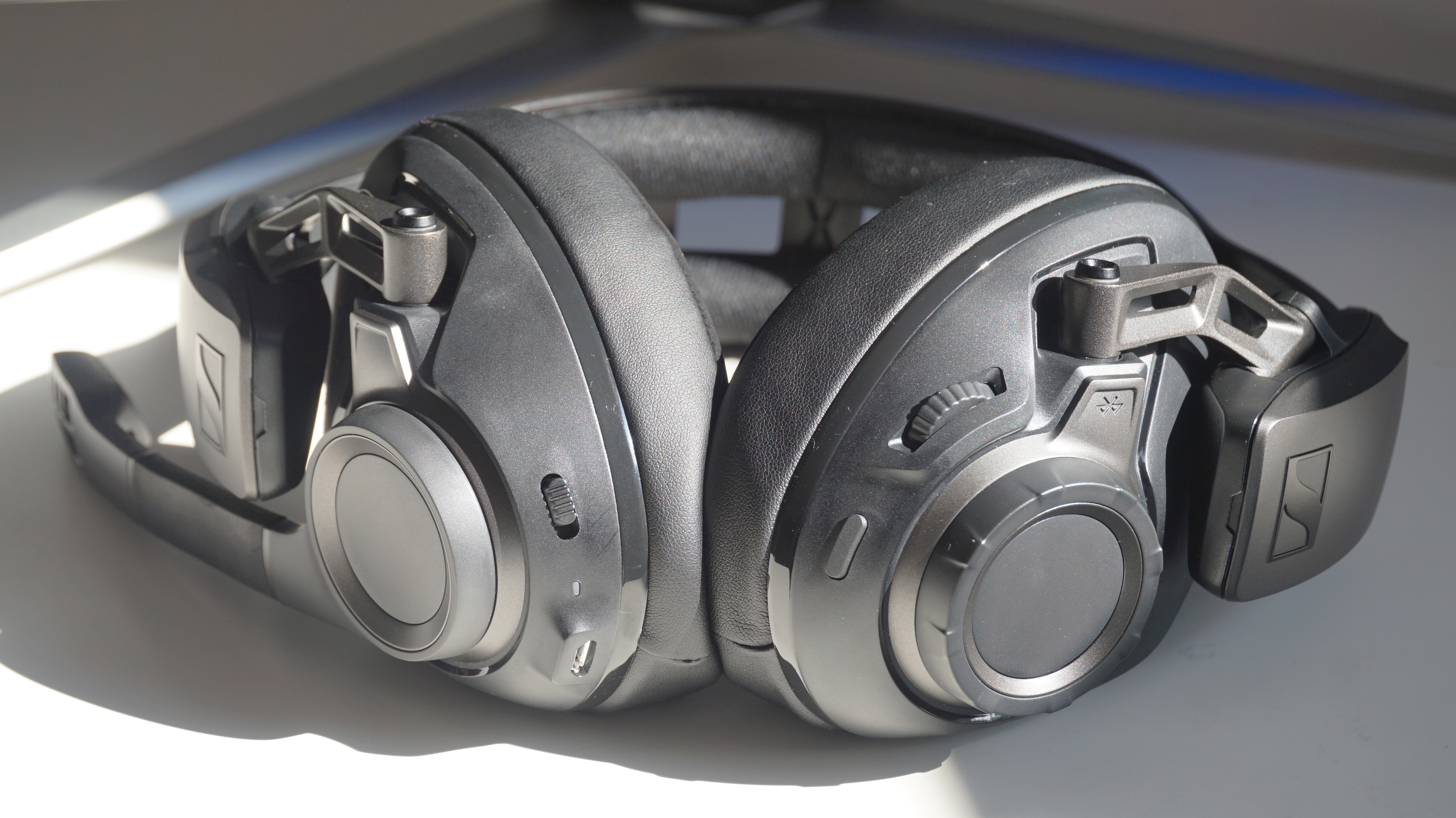 In Doom, for instance, everything from the game's bassy battle music to its hoary demon screeches felt in perfect alignment. Not once did the backing music feel like it was overpowering the action playing out onscreen, and each gun had a lovely sense of heft and weight to them. Well, almost all of them. The Super Shotgun, my favourite and stalwart audio testing companion, sounded a little underwhelming to my ears, as if I wasn't really hearing the full brunt of its double-barrelled brilliance.

I noticed a similar thing when I came to use the GSP 670 as a regular music headset, too. The sense of clarity it can deliver is fabulous, but the bass sections of certain rock tracks also felt a touch timid compared to other headsets I've tested in the past - almost like it was afraid of waking the neighbours if it dared to let its hair down.

This weird kind of aural reticence manifested in other ways, too. In Hellblade, for example, I noticed the game's usually ominous and eerie strings sounded a tad muted against the swirl of voices whispering and snickering inside Senua's head, and smaller details such as the dripping water from her wooden paddle and the cracking thunder overhead didn't come through as much. It still produced a lovely, immersive sound overall, but it never really blew me away as I might expect a £300 / $350 headset should. 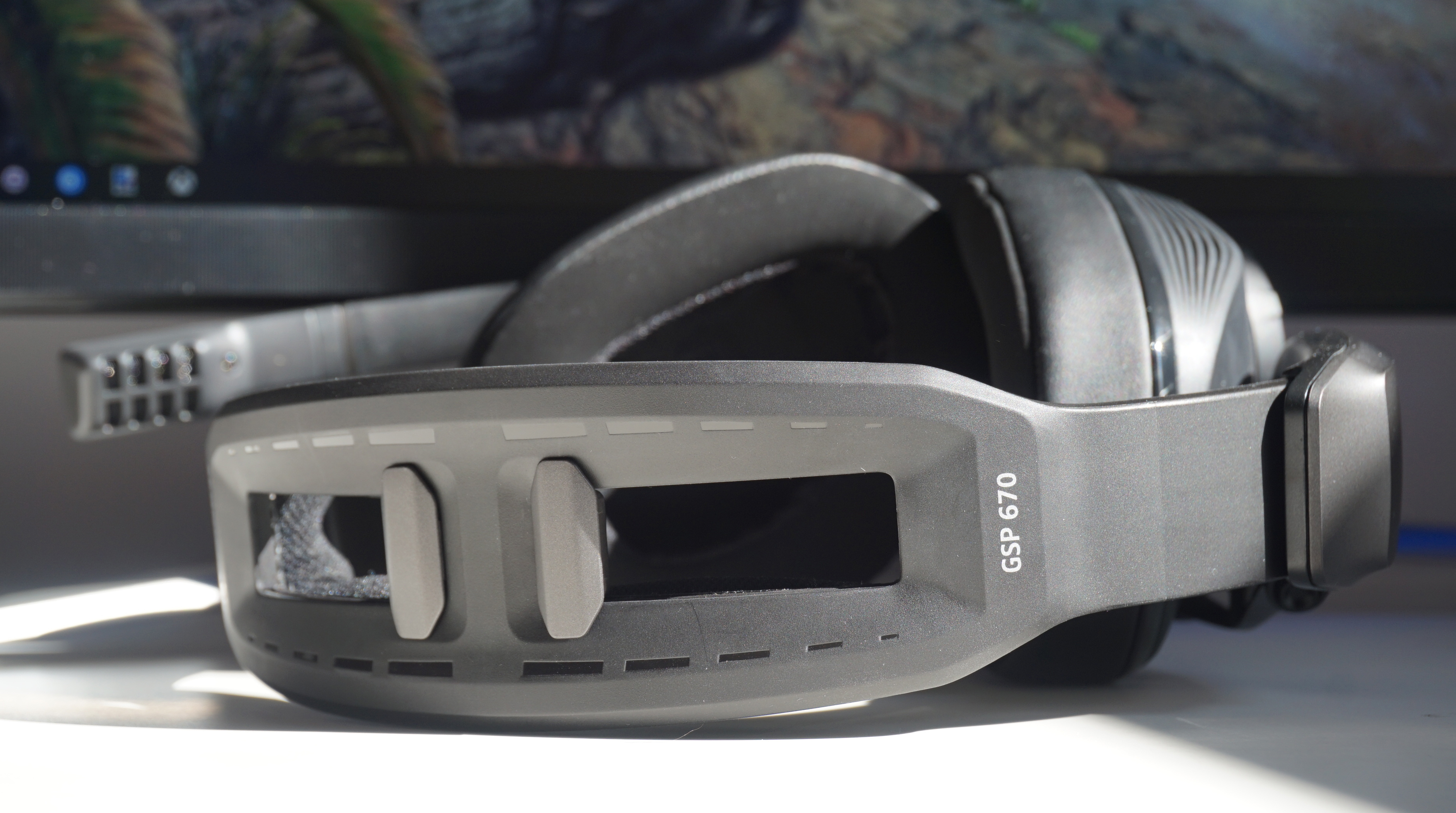 The same goes for Final Fantasy XV. The orchestral music accompanying Noctis and co's boyband jaunts sounded great as I marched them up and down the hills of Duscae, and I was able to hear everything loud and clear even in busy battles. But it also sounded, well, just like it normally does. There was nothing special about it. No extra warmth, no extra sparkling detail or nuance. Nothing. Everything just sounded like it's always done, and that's not really what I want from something that's so crazy expensive.

The GSP 670 does, admittedly, have four different audio profiles to choose from if you tap the little flat button on the right hand ear cup, but even these didn't help fix the problems I've just described. The Music profile did give regular music tracks a bit more oomph, truth be told, but neither that, Movie or its horribly airy Esports mode delivered the goods when it came to restoring Doom's Super Shotgun to full, gut-busting power.

There were other niggles I had with it as well. Sennheiser claim the GSP 670 is meant to have a 10m wireless range, for instance, but even moving 2m away from my PC to go and type something on my laptop started to make the signal go all wonky - and that's just with a wooden desk sitting between my headset and its USB dongle. 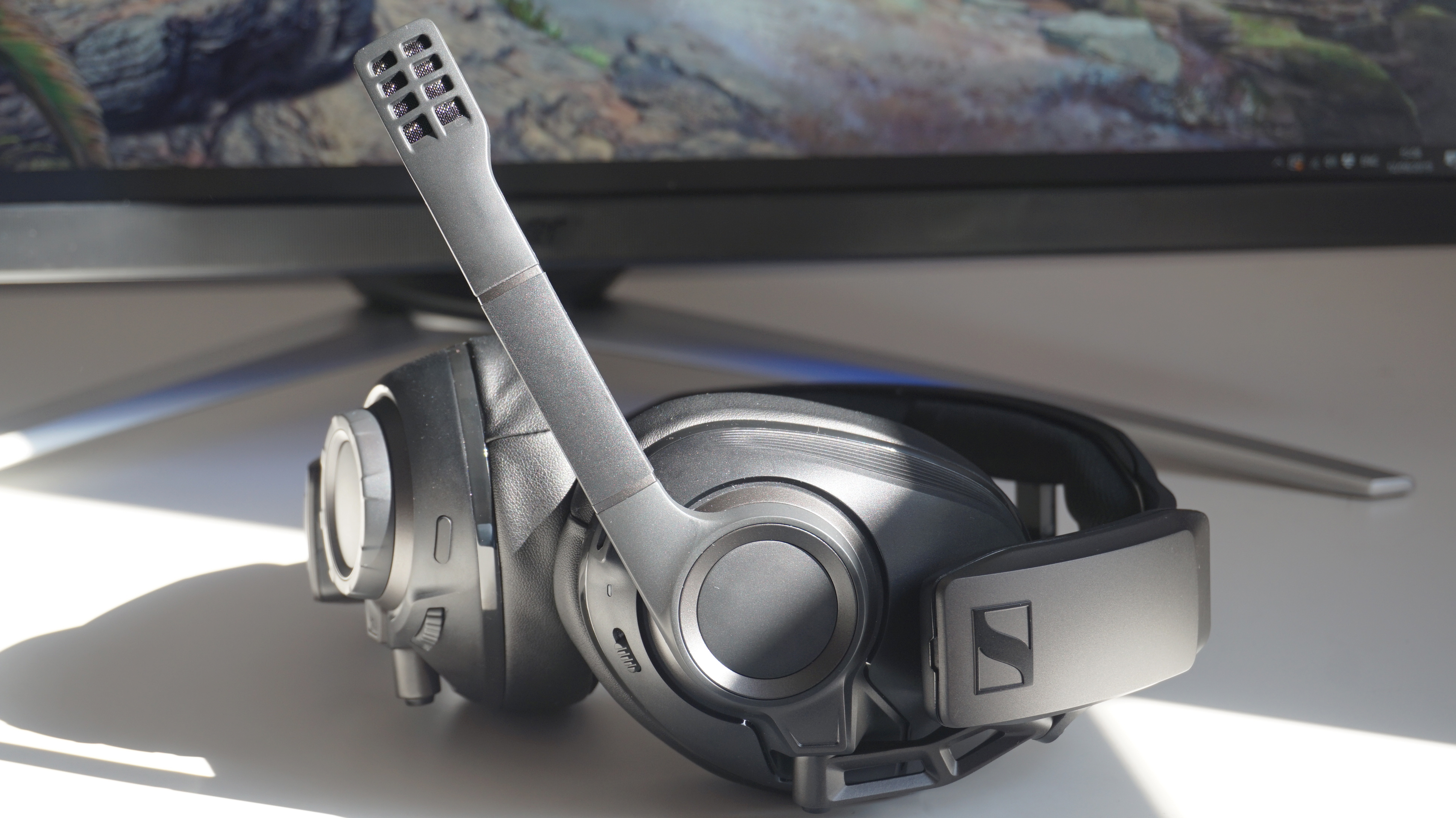 Its battery life also isn’t as good as the similarly priced Steelseries Arctis Pro Wireless, the even more expensive cousin of my ultimate headset, the Steelseries Arctis Pro + GameDAC. While the GSP 670 is rated to last around 16 hours over wireless and 20 hours over Bluetooth (although, like the Arctis Pro Wireless, you can only use this for taking calls from your mobile, not listening to music), the Arctis can do 20 hours straight off the bat. Yes, those 20 hours might be split across its two separate batteries, but when one of those batteries is always being constantly charged inside its bundled DAC, it means you never have to reach for a charging cable and put up with being tethered for a bit like you do with the GSP 670 - even if its fast-charging USB port does mean you can get two hours use from it after just seven minutes plugged in.

The GSP 670 also can't compete with the Arctis on overall comfort. I know I'm particularly fussy about this aspect of a gaming headset, but needless to say, I'd be royally miffed if I spent £300 on a headset that started pinching my head after an hour. The sliding pressure controls did help ease the pain somewhat when I relaxed them completely (on their tightest setting I barely managed half an hour), but it still can't beat the supreme weightlessness of its Arctis rival.

Also, just look at the size of this thing. I've said this about other Sennheiser headsets in the past, but I'm really not a fan of their overly chunky design. It certainly doesn't look like a £300 headset, nor does the abundance of plastic make it feel like one either. The giant microphone's a bit of a beast as well. It's a flip-down job, albeit with no handy noise or beep to tell you it's live or not, and while I was impressed with its zero tolerance for background hiss and breathy wind pops, my voice also sounded noticeably artificial when I listened back to a recording I made of myself talking in Audacity. I tried changing the tone of the mic in the GSP 670's Sennheiser Gaming Suite software, but neither the Warm or Clear profiles seemed to make much difference. 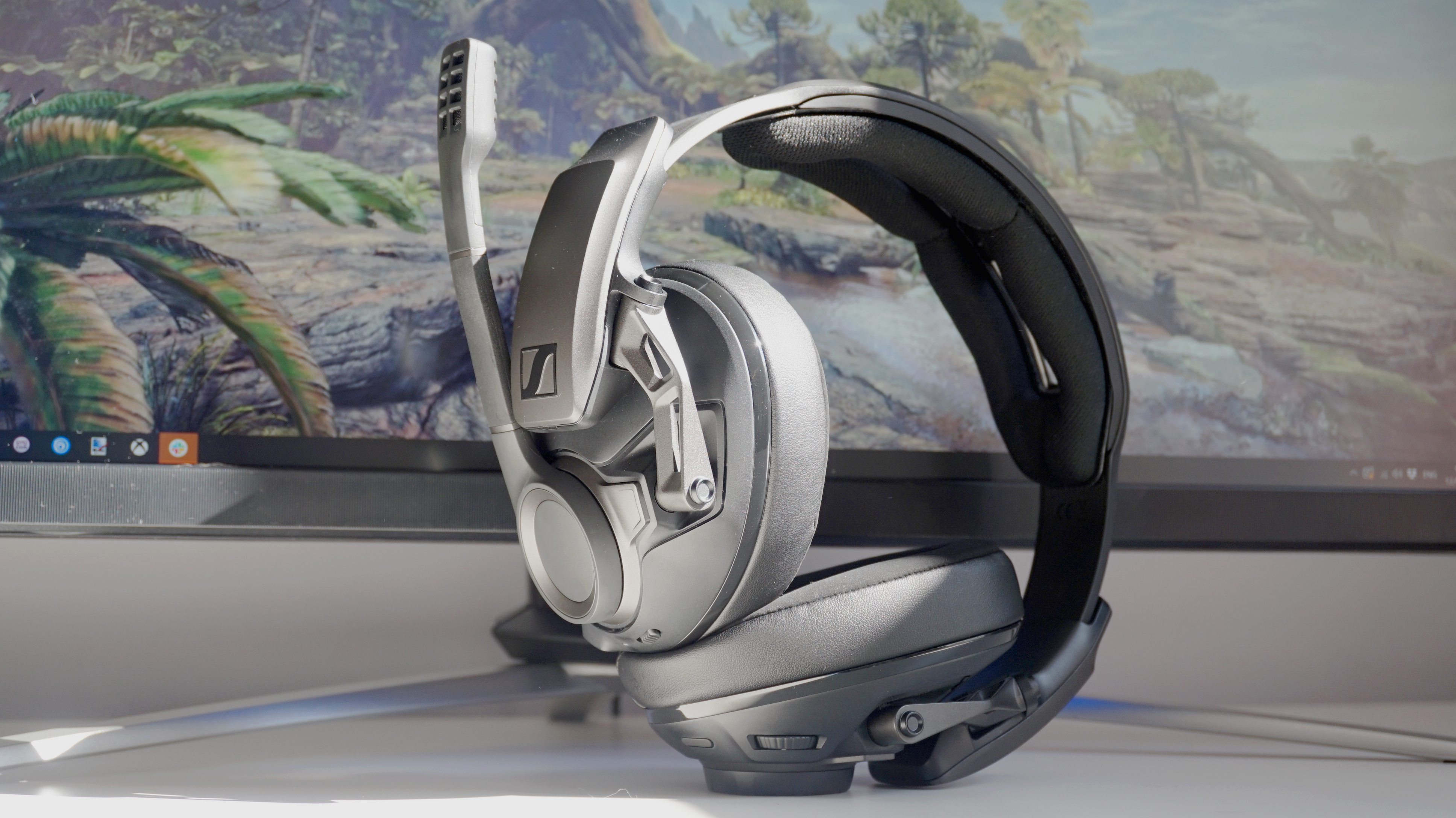 That said, I did appreciate its dedicated chat volume wheel on the right hand ear cup, allowing me to tune out the heinous cries of horrible children in online multiplayer games. I also breathed a sigh of relief when I found the sidetone setting in the Sennheiser Gaming Suite, as it meant I could finally hear myself talk from inside the GSP 670's incredibly well-insulated ear cups. I was less fond of the 7.1 surround sound button, if only because that also completely nuked the sound quality when playing games, but it will probably be more useful if you're using it to watch films that actually support it - provided it doesn't give you a headache halfway through watching one, of course.

Overall, though, if I did somehow end up with £300 / $350 to put toward a gaming headset, I don't think I'd spend it on the Sennheiser GSP 670. As I mentioned above, its sound is really very good most of the time, if a bit restrained and too uptight for its own good, but it also lacked that special something to make it truly stand out as a top-end headset. Plus, when it costs exactly the same as the infinitely more comfortable and convenient Arctis Pro Wireless, there's really no contest. The Sennheiser GSP 670 is good, yes, but perfection it is not.