It's been a while since I last looked at Blade's Shadow cloud PC service. Over a year, in fact. Since then, Blade have grown quite a bit, expanding their remit to the US and five other European countries after initially starting out in France, and today marks the release of their brand-new cloud box for sticking under your TV or monitor, the Shadow Ghost (which is pictured up the top there). Could this tiddly monochrome miniature of the London Aquatics Centre really replace your current gaming tower, though? Let's find out.

The tech behind Shadow is pretty much unchanged - you still get your own dedicated GTX 1080-powered cloud PC with an Intel Xeon CPU, 12GB of 2400MHz RAM and 256GB worth of storage space - as is the price, which is still £26.95 / $34.95 per month if you sign up for a year's subscription. The only thing that's really different is that the old Shadow box, which is what I saw last year, has now been replaced by the newly designed Ghost, which will set you back £110 / $120.

You don't technically need one to use Shadow's cloud PC service - it's also available via an app for existing PCs, Macs, Android and iOS devices - but if you want to plug it into a screen, such as a TV or monitor, for example, in order to replace an existing PC, laptop or Mac, then you're going to need a Ghost box.

I must admit, the design is definitely easier on the eyes than the old box, which was all sharp black angles and had a very l33t gamer kind of vibe to it, and it will probably fit in a lot better with all the other bits and bobs you have under your TV if you were thinking about plonking it in the living room. I still think the Ghost's obsession with wonky white knobbly bits is a bit over the top - if they really wanted it to disappear and blend in with the rest of your set-top boxes they should have given it a plain, smooth finish, in my eyes - but on the whole it's certainly much less of an eye-sore than either the old Shadow box or something like the Nvidia Shield, which also graduated from the same school of edgy black triangles.

Just like the old box, though, the Ghost is essentially a glorified ports box, albeit with a wider selection of connections this time. As well as an HDMI 2.0 output for plugging it into a 4K display, it's also got two USB 3.0 ports and two USB2 ports for your peripherals such as a mouse and keyboard, plus a Gigabit Ethernet port for a wired internet connection and a 3.5mm audio in/out jack for a headset. It also supports Bluetooth 4.1, as well as 802.11ac dual-band Wi-Fi.

But despite Blade's marketing push to sell the Ghost as the ideal living room solution for high-powered PC gaming, the actual location of all those ports isn't particularly conducive to kicking back on the sofa. There's no front-facing USB port for a wired controller or lapboard, for example, and while its little rubber feet do a reasonably good job of keeping its lightweight chassis in place when all your cables are trailing out the back (like you would have for a normal monitor setup), it's simply not heavy enough to stay put when you start tugging those USB peripherals out in front of it.

Sure, you could probably get around part of that problem by using a wireless controller over its Bluetooth connection, but lapboard fans and people with old wired Xbox 360 controllers like myself are very much out of luck here. It's still perfectly functional as a living room cloud PC, of course, provided you don't mind putting up with some messy cabling, but it's still got a long way to go before it matches the simple convenience of a modern day console box.

That's more or less it for the Ghost itself. Otherwise, the service is the same across all devices. Now, I know some people don't want to hand over control of their PC to someone else, and that a lot of people take pride in fine-tuning their rig and having it set up just so. That's fine. Shadow isn't for you.

But if you're someone who breaks out in a cold sweat at the very thought of either trying to build a PC or upgrade the one you've already got, then the idea of simply paying a subscription fee to have a super powerful PC at your fingertips without all the hassle of swapping out components every couple of years is certainly an appealing one.

But let's say you plan to use that PC for the next five years. A Shadow subscription, meanwhile, will cost you £27 / $35 per month, which is £324 / $420 year. Times that by five (£1620 / $2100) and it's not far off what you'd pay for a similarly-specced pre-built PC. It's a couple of hundred smackers more expensive, sure, but when Shadow take care of all the eventual upgrades as well, I reckon that kind of convenience is probably worth the extra expense.

At least in theory. The idea of a having a cloud PC like Shadow is sound. It's zero faff for near top quality components, and Shadow's built-in high internet speeds - up to 1Gb/s download or 100Mb/s upload - also take the hassle out of waiting for massive games to download. Admittedly, I only ever saw a peak of around 100Mb/s when I tried downloading Final Fantasy XV, for example, but I still completed the 77GB download in under an hour, which is a heck of a lot faster than it would be on my normal home internet. 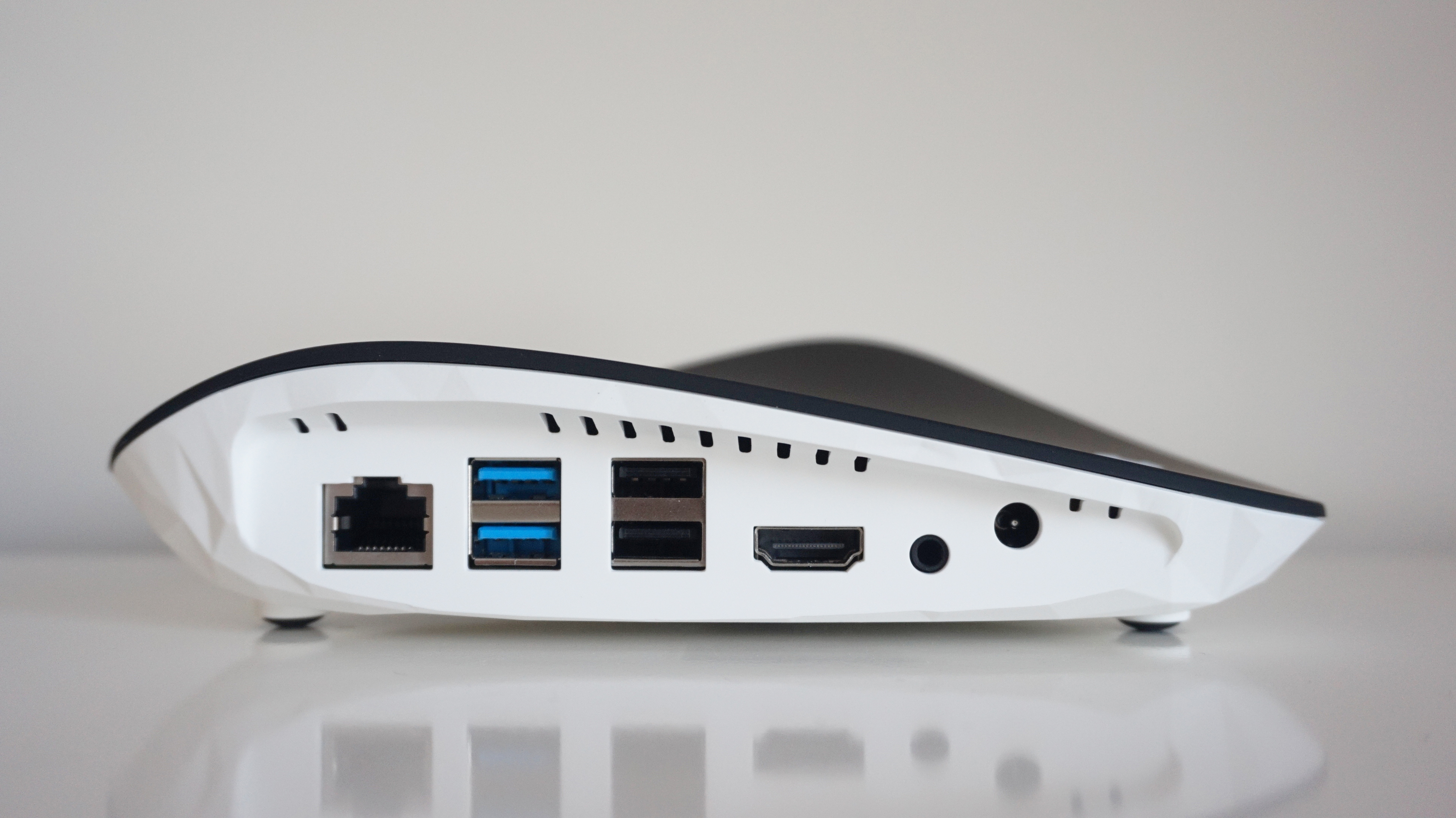 The problem is that, unless you've got the absolutest bestest best home internet, I don't think the end result is quite there yet compared to what you get with a proper, physical PC - at least when it comes to anything more demanding than streaming games at 1920x1080. I mean, I've got a pretty decent internet package with download speeds of around 25Mbps according to Speedtest, and Shadow themselves recommend you have a fibre or cable connection (check) that can handle Shadow's average bandwidth requirement of 5-25Mbps (double check).

But when the Ghost's main selling point is 'Hey, hook me up to your 4K TV and play games at 60fps', I really struggled to get a decent experience at this resolution. Setting it up wasn't a problem. Once I'd selected my keyboard layout, connected to my home Wi-Fi network, logged in to my Shadow account and waited for it to finish downloading its various updates for the box, I was able to launch Shadow's streaming service without issue. From there, it was just like I was setting up a regular Windows 10 PC for the first time.

And once you land on the desktop, you can pretty much do anything on Shadow that you'd do on an ordinary PC - download Steam and play any game from your existing library; install your web browser of choice; edit photos; watch videos. You name it. There's none of this 'you can only play this select number of games' malarkey like Nvidia's GeForce Now service. It's just like having a regular PC, albeit one that's sitting in a data centre somewhere instead of blowing a gasket under your desk or next to your TV.

For me, however, there was a noticeable lag when I had it set to 4K. From simple mouse movements across the screen to shunting windows around the desktop, it felt like I was in possession of an ancient Pentium PC that was struggling to even comprehend basic desktop tasks, not a server-grade Xeon - which isn't really what you want if you're thinking of using it to replace your existing PC. It may also have something to do with the fact that the UK's Shadow data centre is located somewhere in Paris, which may not be the case for other countries or US towns where the data centre's much closer, but still, it doesn't exactly make a great first impression. 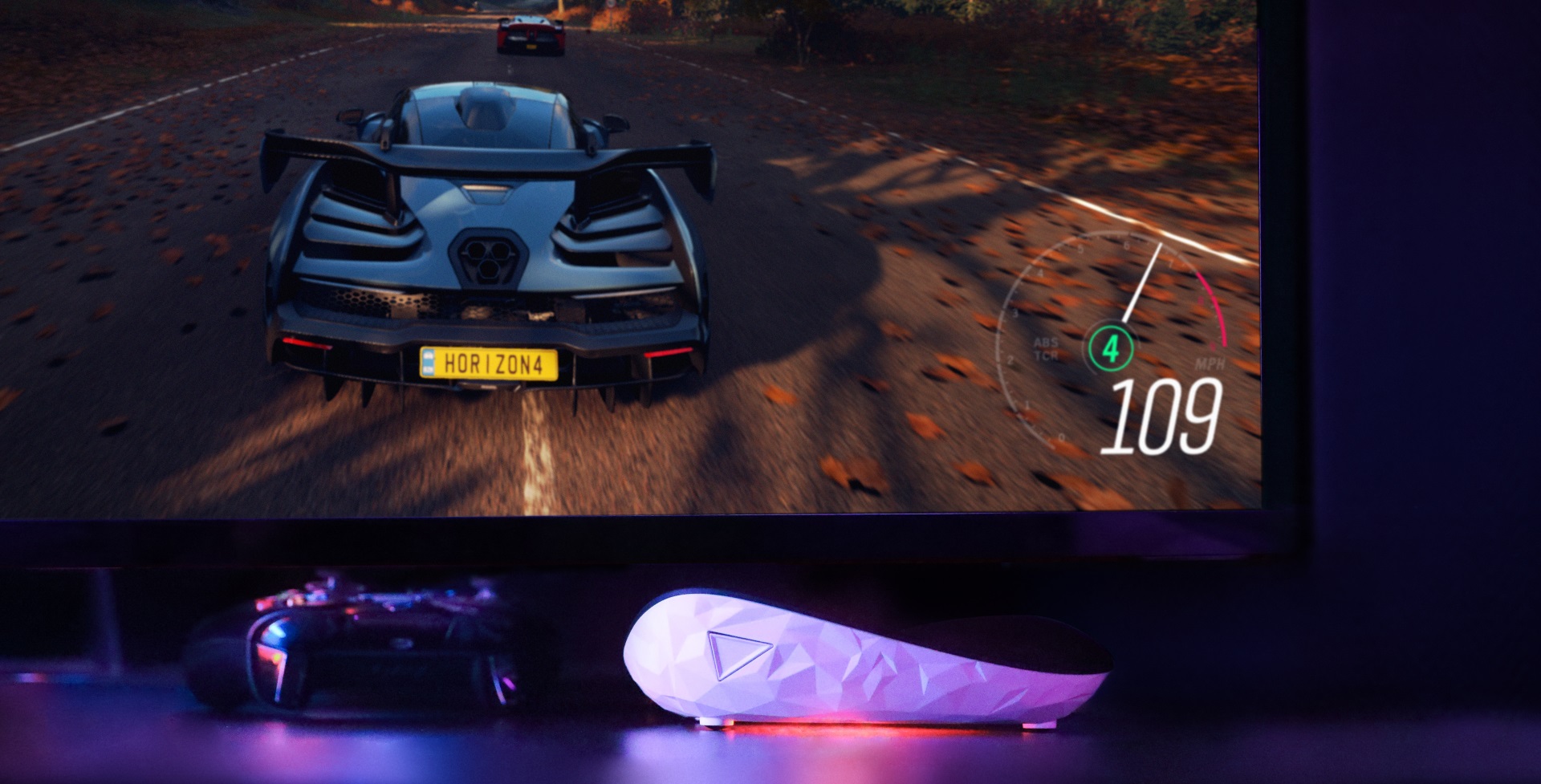 That said, Shadow's desktop lag wasn't nearly as prevalent when playing games. When I booted up Final Fantasy XV, Shadow of the Tomb Raider and Monster Hunter: World, for example, it felt perfectly responsive playing on mouse and keyboard at 4K, and I was able to control the camera and fight giant monsters with no problem whatsoever. Indeed, from a lag point of view, I'd be hard-pushed to say if it was any different to playing it on my regular PC.

There was, however, a certain fuzziness that I couldn't quite shake. Again, a large part of this is probably down to the quality of my own internet connection, but on my 4K TV it looked like I was actually playing something at 1920x1080 upscaled to 4K, and everything from the world at large to the menu UI just looked a bit hazy round the edges. It's not like fast-paced tussles or quick camera pans ever descended into a blocky, incomprehensible mess. Far from it. But if you're going to have a satisfactory experience at 4K, then you're going to need much better internet than I do.

Indeed, lowering the in-game resolution to something like 2560x1440 or 1920x1080 just looked even worse on my 4K TV, as everything looked even fuzzier than it did before. I know it's not my TV doing a bad job at upscaling, either, as I played the entirety of Shadow of the Tomb Raider on that TV at 2560x1440 using my GTX 1070 Ti-based PC, and that looked infinitely sharper than what I was seeing through Shadow.

When I tried connecting my Ghost to a 1920x1080 display, however, everything looked exponentially better. Those fuzzy edges had vanished, character models and background scenery were much, much sharper, and it was generally a much smoother experience - almost as if I was, in fact, playing it on a proper PC. I didn't experience any lag on the desktop, either, and that is something I'd definitely be happy to pay a subscription fee for.

As a result, this only reinforces what I said earlier about Shadow still being best suited for traditional, desktop-based cloud gaming as opposed to sticking it down in your living room. If you've got bonkers internet then you may well get along with it much better than I did on a 4K TV, but for everyone else, I think you'll be much better off pairing Shadow with a 1080p display. There's certainly a lot to like here, particularly you like the idea of never having to upgrade your PC ever again, but if you're into gaming at 2560x1440 or 4K resolutions, you're still better off sticking with a proper PC for the time being.