Earlier this week, four lucky inhabitants of the RPS Treehouse were selected to travel… to Space. Our mission was to colonise a distant world, using only our wits, our brawn, and the game Space Engineers. None of us had ever played it before, and all we knew about it was that it was reputed to be as complicated as it was unforgiving. But humanity didn’t reach the moon via careful planning and risk assessment, did it? To hell with the odds: it was time to leap into the void.

Getting the crew together 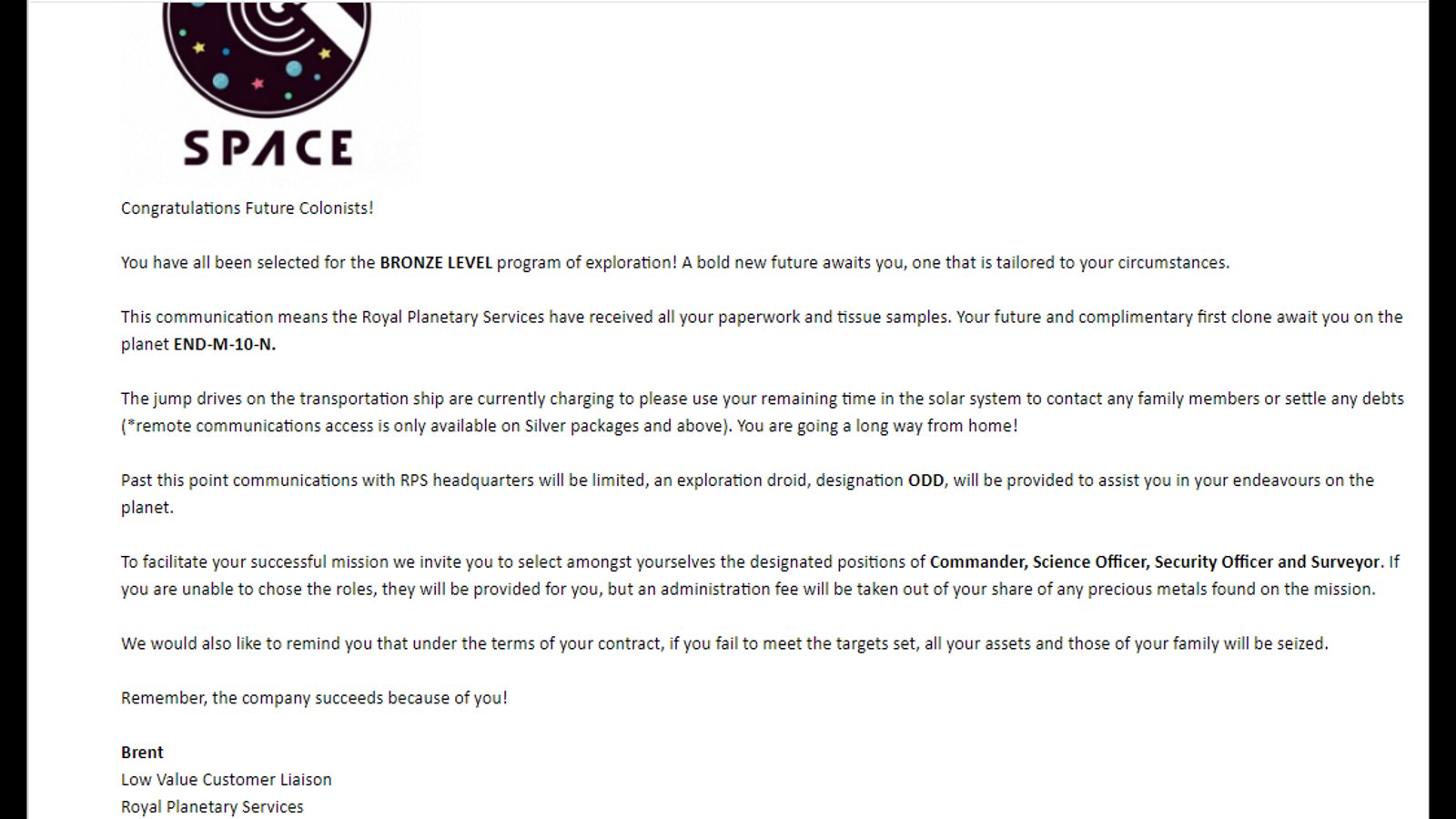 Here was the email that Nate, Matt, Alice B and Alice L received on Monday night, from the mysterious “Royal Planetary Services”. The letter set out our mission, our time of departure, and even promised us our own robot guide. Suffused with a relaxed air of “what could possibly go wrong?”, we packed our virtual bags, dished out the roles on offer, and then spent ages deciding on the colours of our spacesuits.

(Note: Alice L came down with a bout of Moon Mumps right before we played, so she had to sit out this first session. But given how things unfolded, she probably dodged a bullet there.)

We might not have been engineers, and we knew bugger all about space, but we were confident we were going to be the best damned Space Engineers this side of the Oort cloud.

We figured that given her seniority and hatred for making decisions under pressure, Alice B should be our Commander, while Alice L, as the team’s resident Video Bud, was a neat pick for Surveyor. Being a huge coward, Nate was the natural pick for Security Officer, while Matt radiates so much Science Officer energy he could hardly be anything else.

Oh, and soon after we picked our roles, we were transmitted the first image of our Robot Assistant, ODD, who we would meet when we landed on the site of our colony-to-be:

He seemed… well, yeah, he seemed OK. But there was no time to worry about that - it was time to go… to Space!

As Commander, I was first into the planet’s atmosphere in my spawn pod, and made the decisive move to leap out of it mid-flight because that was the only option I saw available to me at the time. I was left hurtling with ever increasing speed at the ground, a bright green alien planet. The little fluffy blobs that I assumed were bushes turned out, as I approached them rapidly, to be trees. Bright orange trees. Let the record show that my first words on sight of this brave new world were: “I’m falling!”

As soon as I stepped out into this strange world of green and orange (unnervingly, it had the exact same colour palette as a bag of MAOAM), I realised something had gone very wrong: my crewmates were nowhere to be seen, and their radio signatures were coming from far over the horizon. We had scattered in atmosphere.

Worse yet, our robot helper ODD (who was waiting with the materials shipped here for the construction of the colony) was some twenty kilometres away across untouched alien wilderness. He was very pleasant about it all over the radio, even if he did have a strange growly robot voice, and he talked us through scavenging some useful bits from our drop pods. But we’d need to get to him ourselves.

Oh well, I figured, what harm could a walk do? It might do us good to get the lay of the land a bit. Then the wolves showed up.

Not incomprehensible alien wolf-analogues, or even wolves with an exotic outer-space palette swap. Just plain ol’ wolves, barking and running savaging. I went down under a pack of them in seconds, before I could even get out my drill.

Hearing the security officer getting devoured over the radio, I figured I’d use my scientific know-wots and activate my jetpack - on a tank of hydrogen fuel, I’d surely be able to make it most of the way to ODD’s location, right?

Nope: I went straight into a mountain.

I think I have previously demonstrated that I am a decisive leader, so I was hanging around my spawn pod trying to think of a plan C for the team, when the wolves found me. I was eaten in moments, then respawned almost immediately, so I could have the treat of watching them savaging my own corpse. It was an odd situation. This is an odd planet.

My own space wolf adventure went much more smoothly, until it didn’t. I thought I was fine, easily outpacing my canine companions. Then the game stuttered a bit and they ate me.

I tried to make the run a few more times, but always wound up as wolf food within a couple of minutes. It didn’t help that at some point the wolves figured out how to descend from the sky immediately in front of me, like the SAS but fluffier. And more bitey.

ODD explained that if we could only get the hang of our jetpacks, we would be able to reach him in no time. With a little forward momentum, and by disabling the dampeners on the devices, we could leap gracefully over huge swathes of the planet like big space-ish ballet dancers.

Surely the Science Officer’s earlier folly was just beginner’s misfortune, I thought, as I jetted off. Possibly not, I reflected, as I hurtled into a cliff face so hard that I instantly died. This happened more than once. I resolved to revert to cowering next to my respawn pod until a solution was found.

I was the next to try my jetpack, and of course I slammed into a mountain. But as I didn’t die on impact, I declared victory.

I was, however, trapped in a crevice with no fuel left. And there were wolves waiting outside.

After the wolves moved on, I used a power drill to break free of the crevice, and scampered down the mountainside.

Freedom! And better yet: there was an unidentified signal nearby, and that almost certainly meant something to salvage. And indeed, when I found its source, I danced for joy - it was an automated drone, rolling along not bothering anyone.

Like a wolf myself, I savaged it with a drill, and took all of its components. These would surely come in handy later.

I decided to stay, as it were, ‘in the car’, trying to navigate my many inventories, when out of nowhere I began dying. My life support told me I was freezing. ODD suggested that I’d run out of energy in my suit, but that wasn’t it.

I was left with no choice but to leap around my pod like a terrified cat being continually shown a cucumber, all the while slowly losing health and making the sort of noises that I imagine Jason Statham makes during coitus.

“Commander! Do you see the picture of a space helmet on the bottom left of your screen?” asked ODD, in his calm robotic voice. “Is it lit up? No? Okay, press J.”

I had accidentally opened my helmet. Science Officer Cox found this very funny.

I, meanwhile, was actually being productive. As evening descended, our helpful robot friend talked us through how to extract sweet, sweet minerals from the ground, but I think I was the only one listening. Oh well. Still, I did what I was told, plopped the minerals into my survival pod as instructed, then built a computer and three girders. For science.

As a good Commander, I told Science Officer Cox that he should keep doing what he was doing.

I thanked our commander for her A+ commanding, then stepped up my mining game: our robo-pal had told me it was more interested in refined raw materials than exotic fabrications like “girders” or “steel plates”. I did a big dig in a clever circular fashion, so all the rocks collected at the bottom and I could pick them up easily. Then I laughed some more at Commander Bell, panicking as her rocks rolled down a slope.

Hubris appeared in the form of three more space wolves, now seemingly more aggressive thanks to the encroaching darkness. So I jetpacked up to the top of my pod and tried to figure out where I’d left my space gun.

Night was falling, and I was in a panic. I had tried to hike back to my drop pod with all the bits I had looted from the drone, but that meant walking over the mountain I had landed on, and its surface was brutally hard to navigate. I tried using my drill to knock away obstructing ridges, but it only used all my suit’s energy, and I ended up frozen to death on the mountainside.

With my next life, I managed to recover my body, and bring the drone supplies back to my pod. Once I was safe, we conferred with ODD as a team - the plan had changed.

As the only one of us competent enough to build something, ODD would have to cannibalise the colony supplies into a rudimentary aircraft, and fly over to pick us up one by one. At each pick up, we would deconstruct our own drop pods, and add the bits to ODD’s growing vulture-craft, until we had a sort of unstoppable flying base. This was to be called Project Vengabus, and it would be enacted at first light.

Following instructions from ODD, I built a rudimentary beacon - a tower of six very basic armoured frames - which would make it easier to find me in the morning. And then I waited, alone, in the growing darkness, as the growls of the space wolves grew ever closer. Project Vengabus could not begin soon enough...

Read on here for Wastes of Space part 2, in which the colonists build their first base, and realise the true majesty of the Vengabus.