If you click on a link and make a purchase we may receive a small commission. Read our editorial policy.
Space Haven review
In space, nobody can hear you arrange your generators in such as way as the noise disturbance doesn't reach the crew quarters.

Colony simulators can be overwhelming. Games like Dwarf Fortress and RimWorld use migration as both a fuel and a pressure valve, delivering caravan after caravan of fresh colonists at regular intervals to ensure the centre of balance of your community is always tipping forwards. Space Haven, which is set not on the filthy ground but in that big empty boob we call space, flip-turns the usual template upside down. You command a ship that quite literally is always moving forwards, resources are scavenged from passing derelict hulls, and fresh crew pilfered from other ships.

It’s a welcome change of pace, taking all of the complex, interconnected systems of a colony management simulator and sticking them in a big metal box that zooms through space. You’ve got the familiar and ruthlessly simulated wants and needs of your inhabitants to contend with. Each member of your crew is cursed with the ability to feel discomfort and sadness. They come with their own traits and skills, making them more or less proficient at operating parts of the ship and more or less compatible with their colleagues. 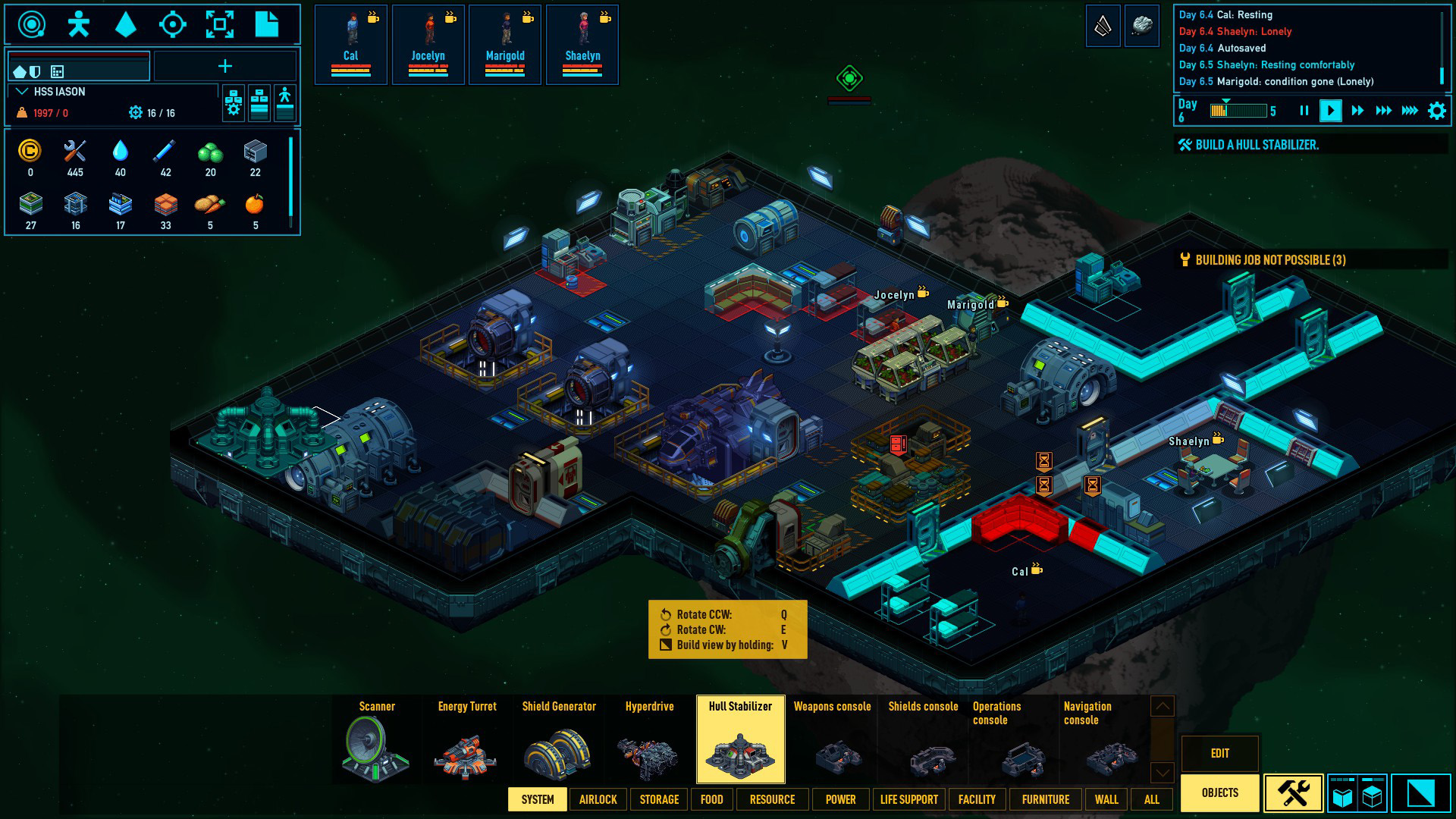 Instead of carving rooms out of solid stone, you’re building out hull sections to expand your available floor space and create a more comfortable environment for your tiny people to hang out and work in. Power generators, recyclers and item fabricators are great big noisy things, and should be cocooned behind insulating walls and doors. Lights must be strewn up and down corridors, grow labs fed by water condensers and positioned near the kitchen, with tables and chairs for communal dining. Maybe an arcade machine to lift spirits.

All of this construction requires vast amounts of stuff – the exact opposite of space – and so the game’s driving force becomes this continuing search for raw resources. Warping into a new sector, your goal is to drill any useful minerals out of nearby asteroids and ransack the husks of wrecked spaceships. You do this by taking direct control of whichever crewmate looks the most capable of firing a gun at a big alien spider, arming them at a supply station then hopping in shuttle and zipping over to explore the dark, mangled ruins of the derelict. 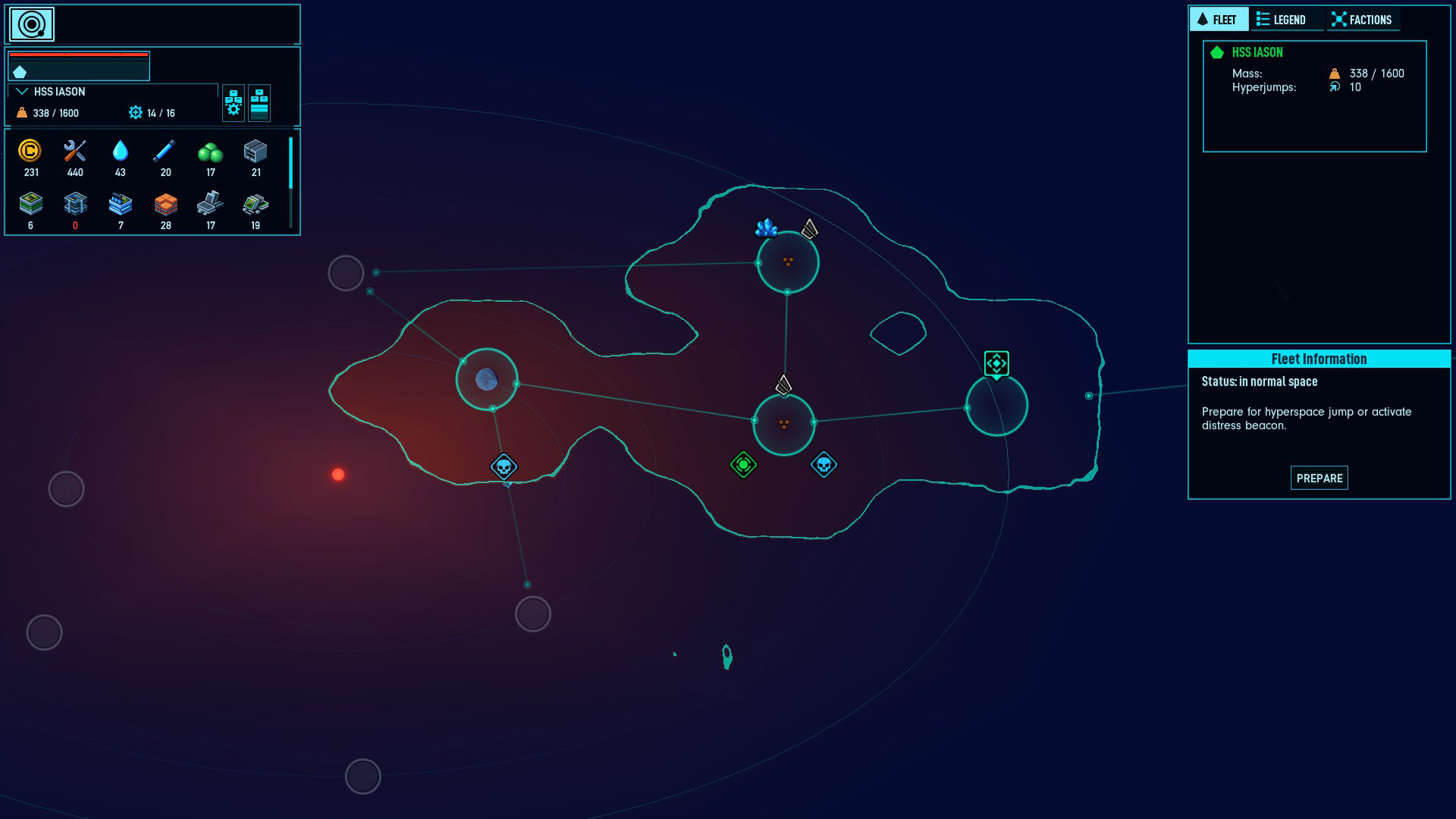 Here, Space Haven takes off its colony management hat and slips into a rather fetching real-time action toupee. These derelicts are spooky haunted places, usually inhabited by furious scorpion things with swishing scythe-arms. You poke around various destroyed crew quarters, operations rooms with great big holes blasted in their sides, every surface covered with a thin layer of sparkling ice crystals. You can find data logs which expand upon the game’s tried-and-trusted backstory, in which humans have balls up the Earth so royally that they’ve had to invent spaceships to go look for a new planet, where they definitely, one hundred percent plan to get it right this time.

Once the ship’s fully explored you can earmark it for salvage, stripping it of useful materials and filling your empty storage bays with everything you need to make precious warp fuel, space toilets and artificial meat burgers. On fast forward this looks like a scene from a nature documentary, a timelapse of army ants stripping flesh from a dead cow. It’s very satisfying to watch, though the process takes long enough that you’ll inevitably draw the attention of nearby pirates. 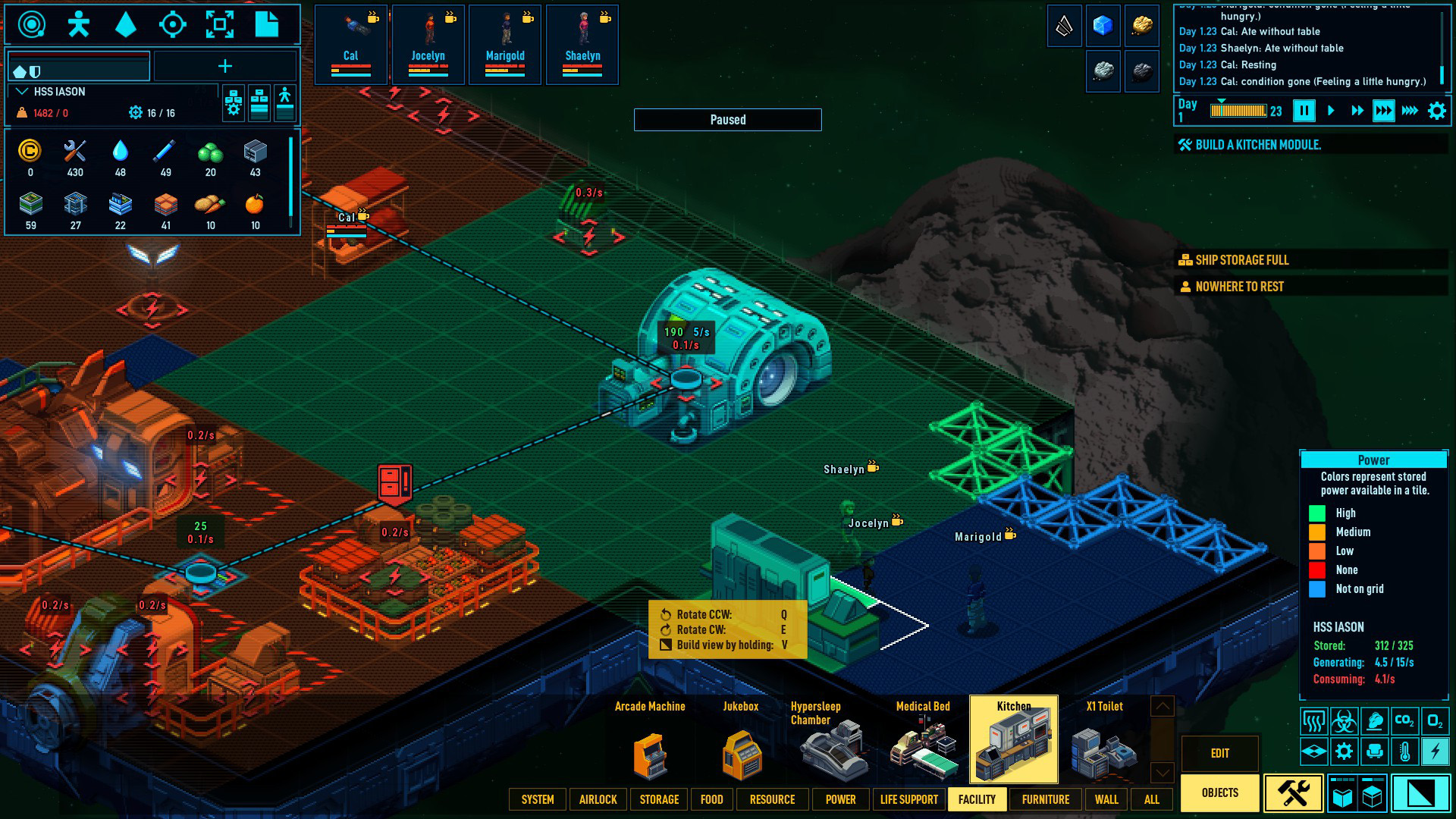 This is where Space Haven feels properly distinct from other colony builders. You can customise your ship to suit either scavenging or combat. Rather than plundering derelict ships like a roaming space coward, you can instead focus your efforts on building shield generators and gun turrets and taking the fight to the various AI-controlled ships you encounter. During ship to ship combat you can target your opponent’s engines and weapons to disable them, and if you can force another ship to surrender and you can take prisoners to be traded.

These are all very interesting ideas, but Space Haven suffers slightly from a lack of joined-up thinking. The simulation is saturated with the same kind of microscopic detail you’ll find in much more developed colony sims – you can track the temperature of any given tile, meticulously trace out a power grid that connects up all your generators and facilities, measure the CO2 build up in a room – but here, that same information feels superficial, inconsequential. Whatever careful tuning Rimworld employs to make sustaining a colony feel like spinning plates, Space Haven’s simulation hasn’t yet cracked it. A cold room can be fixed simply by installing a heater. I placed a surgical bed next to a space toilet, a place where people poop into the cold vacuum of space, and nobody seemed to mind. 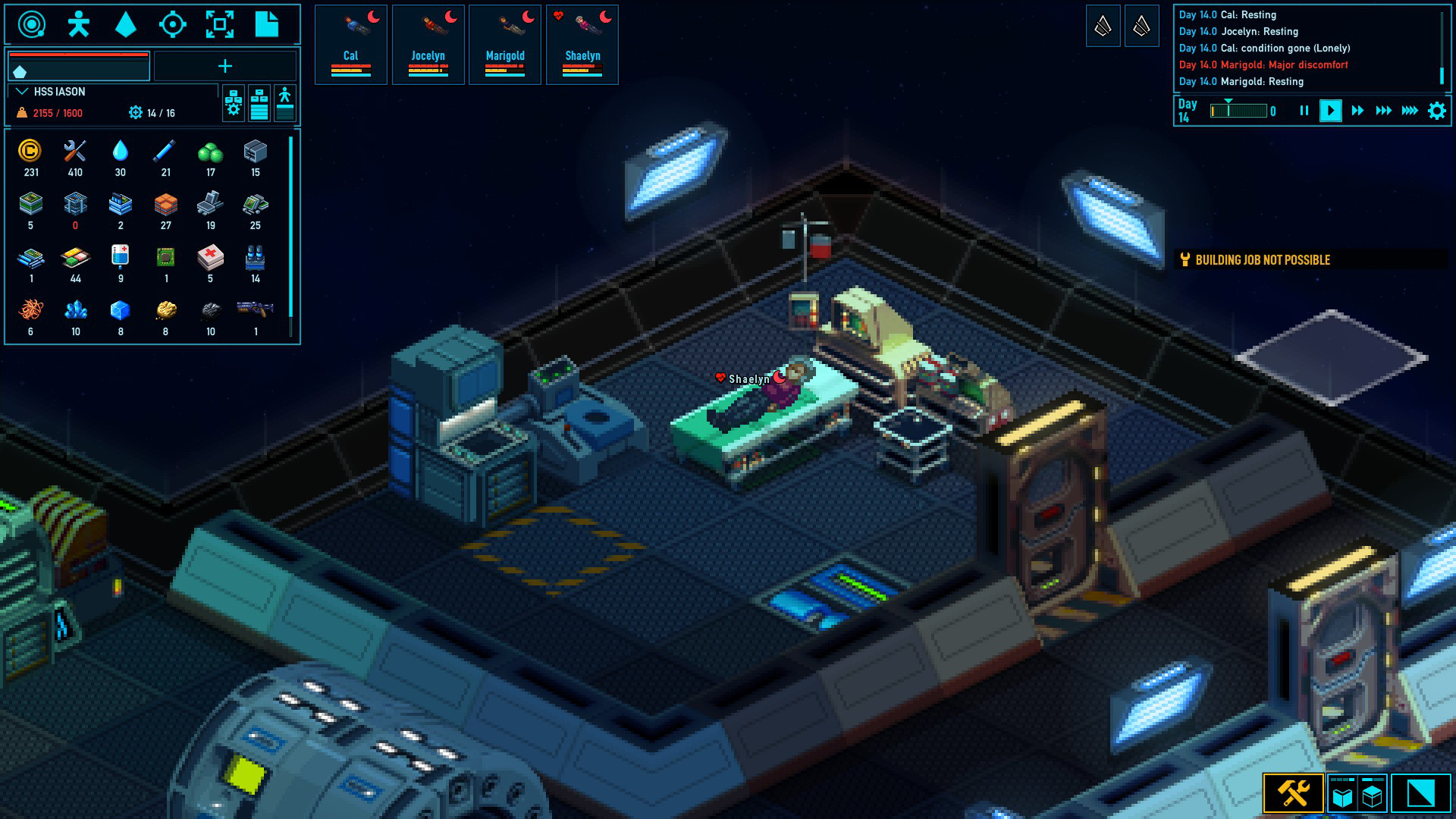 Crew members are thankfully self-sufficient enough that you don’t have to do anything so mundane as manually emptying their bladders or telling them what to eat, but they’re also automated enough that they present you with very few problems to solve. An injured shipmate will jump into a medical bed. A tired engineer will sleep. An uncomfortable botanist will find a couch to unwind on. Sure, it’s super fascinating that individual turrets have to be manually loaded by a tiny simulated person, who may or may not be thinking simulated thoughts about a sandwich they ate earlier that day, but in practical terms it’s all little more than window dressing. Your colony feels more like a fishbowl than it does a spaceship.

It’s a tough balance to strike, but occasionally Space Haven’s scarcity of resources manages to paint you into interesting corners. Your crew may be forced to eat a human foot to survive, or you might dismantle your generators for vital components and swing into low orbit around a sun to charge up on solar power. But for a colony simulator that’s untethered from the tedium of earth, and whose biggest potential is in filling the infinite vastness of space with interesting things to see and do, it too often feels like it may as well be taking place underground.