Games often feel doomed to be defined either by the games they're inspired by, or the games they go on to inspire. After all, this is a space where certain games loom so large that we've named entire genres after them. So it can be tough to sneak out of the "x meets y" framework we use to describe games.

Spark the Electric Jester wears its influences openly. By its own description it's a platformer inspired by several games from the Mega Drive and Super Nintendo, and it's clear there's a love here for Sega's high speed hedgehog. Spark's creator, Felipe Daneluz, better known as LakeFepard, created several well known Sonic fan games, and there's plenty of blue skies and high speed loops to hint at that history. But while retro style games are often content to imitate older titles and rely on the collective nostalgia for them, Spark the Electric Jester builds its own identity.

If Sonic Mania was the peak of a philosophy of fan games obsessively built on details of the Mega Drive titles, Spark, along with Freedom Planet, are from a camp that takes the broad feelings those games inspired and sees what it can build on top of them. 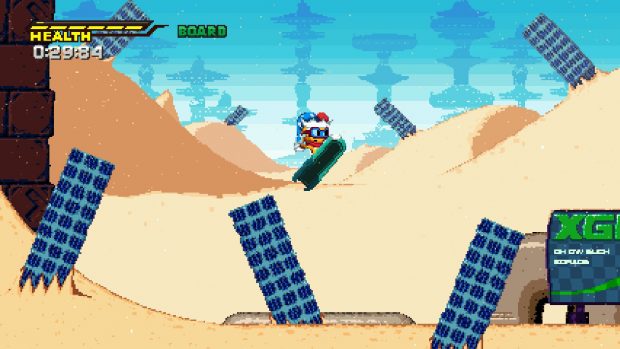 The sheer breadth of ideas is delightful. Spark has the usual array of melee attacks and double jumps, but these are bolstered by several different forms he can equip, each with its own moveset. These might give him new traversal options, letting him slowly descend in the air, add an air dash, or climb on walls. Or he might get powerful combo attacks that chain melee moves together to build a meter towards screen spanning charge beams. Each form has its own nuances, which turns every enemy encounter and platforming challenge into a chance to learn them. It's all brought together by Spark's dash move. The dash makes it easy to keep up momentum. On its own it'll give a short burst to get Spark's acceleration moving, but when timed right on a slope or loop it can also launch him forward. High speed sections change from relaxed scenery tours into chances to feel the rhythm and work up the tempo of the beat. 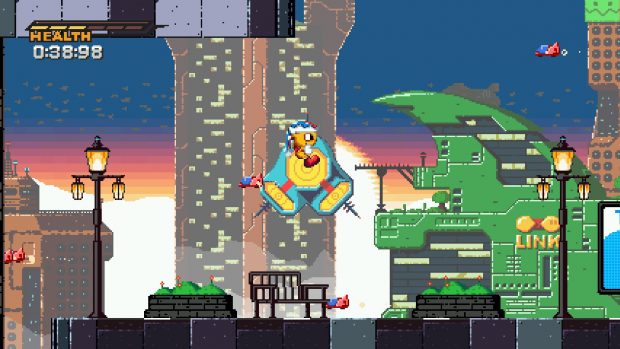 I definitely slowed down to take in the scenery for a few moments, though. Spark's world is a beautiful hybrid of the synthetic and the natural. Beaches and coastline turn into rolling hills, overgrown forests, and arid deserts. Machines populate each space--robots stand guard, windmills dot the mountainsides, metropolitan skylines stretch into the distance, and production lines process and pump oil through high speed tubes. Each corner seems to hide another stage gimmick as well. It could be a simple series of wall jumps, or platforms that need to be expanded with melee attacks before climbing onto them. Or it could be a series of mushrooms that spring Spark into the air and cover him in spores that slow his descent, or columns of rushing oil that give you an extra air jump. The parade of ideas here moves so fast that it's hard not to get caught in the energy of it and miss how clever some of it can be.

That energy carries to the soundtrack, which is an absolute jam. An assortment of synths, moody and energetic, are backed by deep bass and dance style snare and kick drums. It's a powerful feel good mood that's easy to get swept away in. These give way to the boss themes, which move between dark electronic beats, ominous orchestral tracks, and hard rock guitars. It even has its own variation on Dreamcast Era Sonic rock themes, complete with lyrics spelling out the character's emotional state. And the bosses that go along with those songs, oh those bosses. 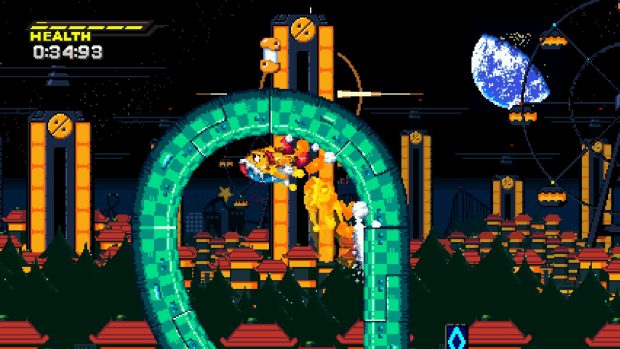 There's a relentless string of mechanical bosses to fight through, the rhythms of each stage punctuated with them. Many of them are variations on the spike-jawed archetypes seen in various roles elsewhere in each stage, looking both menacing and cute. They might corner you with swords, chase you down a highway, or suck you into an underwater whirlpool, but each provide an appropriate setpiece for each stage. Then there's the bigger bads, huge mechs who fill the screen with lasers, or bombard you from the background. There are showdowns on space elevators and reality warping tricksters who send you off to surreal worlds to be taken care of.

These could easily drag down the pace, but damage can be laid down fast with smart use of Spark's varied moveset and meter building special techniques. The fights are often confined, but Spark's powers mean that movement still feels relevant here, especially since a well timed dash can gives Spark a few frames of invincibility. There's nothing better than getting right in a boss' face, letting off a combo, then dashing through their attack and retaliating with a powerful charge attack and seeing that chunk of health bar melt right off. 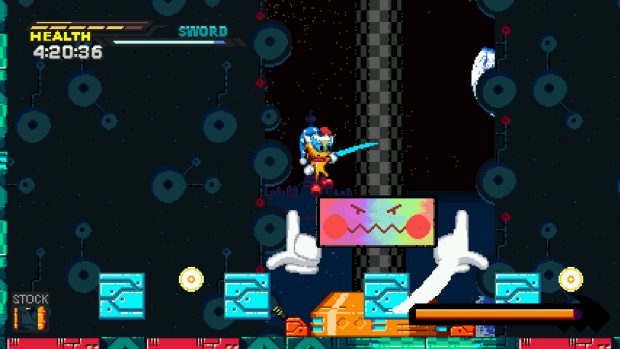 This is even better on the second run, where fights become centered around these split second saves. Spark's rival, Fark (yes, really) is less agile and varied, but bases combat around parries and building meter. Depending on how tight the timing, parries can either drain meter to save Fark from damage, or build it towards a frenzy state. Nailing the timing not only gives killer feedback, but rewards you with bonus meter. This is important since Fark is fragile, unable to take many hits, and building to a frenzy state not only sets up a necessary damage boost, but refills his health. Even better, play clean enough to gain full meter and Fark will go full Super Saiyan, entering a high power state that will destroy anything around him.

These competing styles - Spark's breezy high speed rhythm, and Fark's aggressive combat - highlight the strengths of the other and bring more personality and tonal layers to what are otherwise broadly drawn characters. It's not a new trick, but it's an effective one. 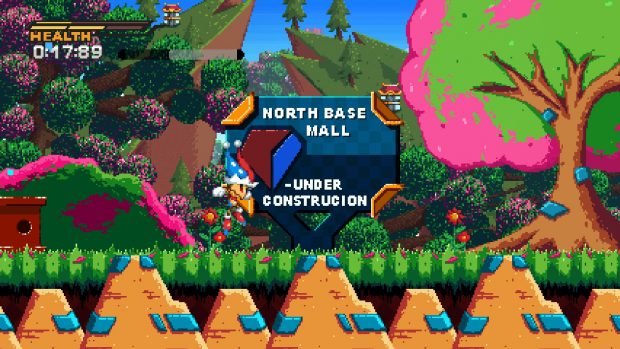 Honestly, I didn't need a second character to come back. The vibrant palettes Spark's worlds are colored in already feel joyful enough. There's a sense of optimism in it, even when covered in machinery and hostile robots. And I've played the soundtrack so many times that the Bandcamp page is telling me it's time that I just put down some money for it. Seriously.

The energy of this game is infectious. Each time I return to it to check something I lose myself in the momentum of it, and end up playing more stages than I intend to. There are plenty of games it reminds me of, but not many that feel like it. The rhythm of it, the way it feels in my hands - there's a unique alchemy there. More than anything, Spark is the kind of game that feels like a step forward in the lineage of 2D games. Something here to remix and refresh old ideas with its own, instead of being content to pay homage to them.