Spring Falls is a puzzle game that I'd absolutely love to have made. Everything it does has a purity and elegance that makes me think of Matthew Brown's wonderful Hexcells games, from the soothing ambient guitar chords in the background to the pleasing geometry of the levels. But while Hexcells frequently made me feel like a genius, Spring Falls has only ever left me feeling... relaxed, but also vaguely bewildered and uncomprehending. Like I've emerged sleepily from my bed in the morning and headed downstairs to wash the dishes, only to find a chimp already at the sink calmly doing it all for me.

Coincidentally, this is the precise emotion that actor Jake Gyllenhaal is so gifted at conveying. So he's gonna help me out every now and then in this post.

Spring Falls is an extremely pretty little puzzle game about irrigation. The aim is to manipulate the terrain of each miniature hex-based level, redirecting bodies of water in order to make all of the flowers on the level bloom. The way this is done is quite simple - but if you'd asked me to explain it while playing, I would have had no idea. It took me sitting down away from the game and doing some inordinately grim-faced think-work to actually comprehend the rules governing each of those beautiful little self-contained ecosystems.

Each level starts with certain tiles being irrigated. These irrigated tiles will automatically spread to any adjacent tile that is also adjacent to water. By pulling certain tiles down and releasing bodies of water into new areas, you can cause the irrigated tiles to spread until they reach the flowers - which is how you induce them to bloom. Every few levels a new mechanic is introduced, such as soil tiles which raise upwards with a satisfying wine-cork-like "THOOK" when you irrigate them; and rain levels which automatically fill any closed-off areas of land with as much water as they can hold. 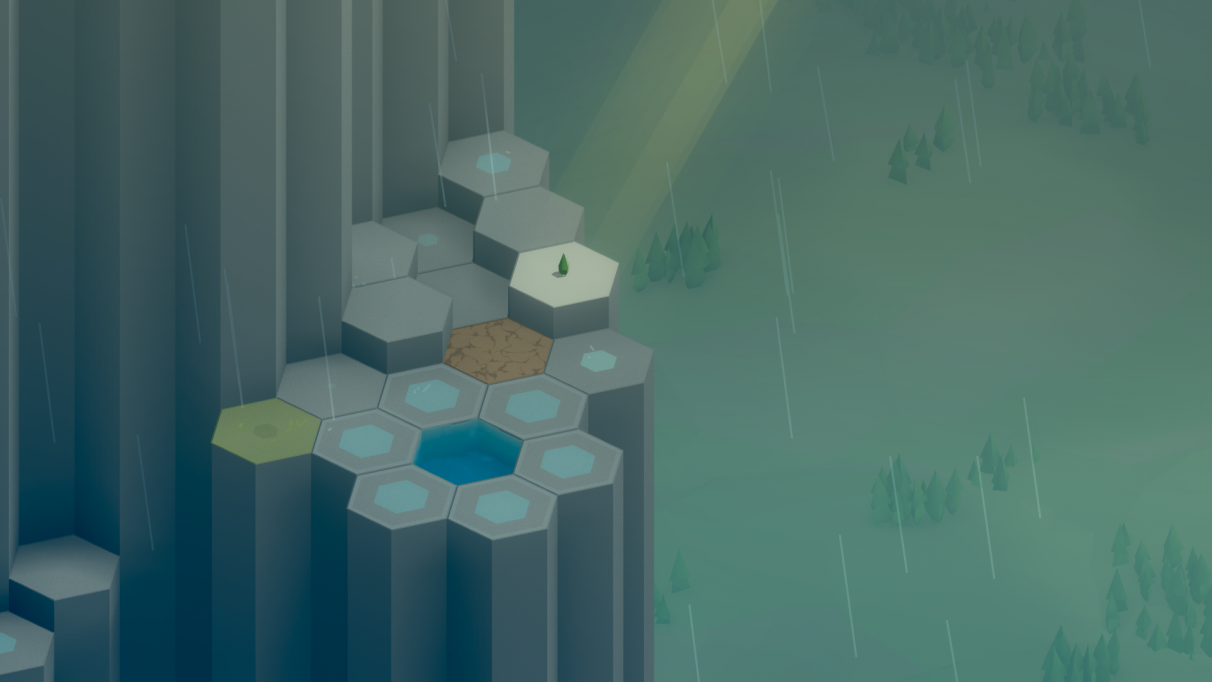 It's all very simple. But Spring Falls seems to encourage players to play in an instinctive manner, rather than a contemplative one. This is partially down to the ease with which you can undo your last action via a prominent button in the top-right corner, which utterly eliminates any need for caution. But it's also because, despite the simplicity of the rules governing these levels, the levels themselves quickly become complex enough that you're better off trying something to see if it works than attempting to predict the consequences of your move beforehand. The act of completing a level almost always involved me pulling down a particular tile, watching all the pretty terraforming take place, and then staring at the screen trying to figure out what had just happened.

Interestingly, Sin described the game in much the same way when she played it for Unknown Pleasures last year, but I didn't read her thoughts until after I'd played it myself and come to exactly the same conclusion. I was playing on instinct, because I'd quickly realised this was the best way to play. And the fact that I never really engaged the analytical portion of my brain probably helped a lot with the relaxing nature of it all. I'd sink back into my seat, feet stretched out, hand on mouse, clicking and dragging tiles, listening to the beautiful Firewatch-cum-Rimworld guitar strumming in the background. Give me a glass of RumChata and I'd be as placid as a puddle within seconds.

But the downside was that I'd never get the big picture at the end of each level, the lightbulb moment that I so adored from games like Hexcells or, much more recently, Return Of The Obra Dinn. I never found myself thinking, "Oh, I see how this all fits together. Oh, wow, that's clever. And I'm clever for figuring it out! This game is great!". Instead I'd be doing this:

I think if I stopped playing Spring Falls for a while and came back to it days or weeks later, I'd have to start from the very first level again. Because I'd be just so utterly lost, having never internalised the rules and logic of the puzzles. But I'm also not sure if it's fair to be framing all this as bad design, because I've enjoyed my time playing Spring Falls - just for different reasons than I expected. I played with the levels like a big ball of Plasticine. I'd delight in the tactility, in the pleasing pops and splashes of the terrain responding to my touch. I was like a god without purpose beyond experimentation and unrestrained play. And sometimes, I'd sit back and just gaze at the screen, transfixed by its precise polygons and gentle geometry. You could take a screenshot of any of the game's 60 levels and it would make a stunning desktop wallpaper.

I just expected something a little more from Spring Falls besides being beautiful. It never demanded anything from me, so I never felt anything except just a gentle soothing serenity. I can appreciate from a distance how clever each level is, and how clever you must be to design a game like this. But I wanted to feel clever too. And I never did.

And yet, I'd still recommend it. But not as a puzzle game. More as a sort of charming interactive screensaver. If you're looking to feel like a genius like I initially did, you might end up disappointed. Instead, Spring Falls is something you'd play for the same reason that you'd just spend time riding aimlessly from place to place in The Witcher 3 or Red Dead Redemption 2. Just to take in the sights, and lose yourself in some beautiful vistas.

Spring Falls is available on Steam.