No matter what may happen to Star Wars, we'll always have lightsabers. That, and loads of great games. Among the best to grace the PC is the Jedi Knight series, the last in its line being Raven's Jedi Academy. It may owe some of its longevity as a multiplayer staple to its engine, a heavily modified Quake 3 codebase, and it can definitely chalk up its still-active modding scene to that. Between well maintained tools, open-source engine upgrades and a dedicated fanbase, Jedi Academy is still going strong in 2020. Here's a handful of the best and biggest mods you can play today.

OpenJK by The OpenCoders Crew 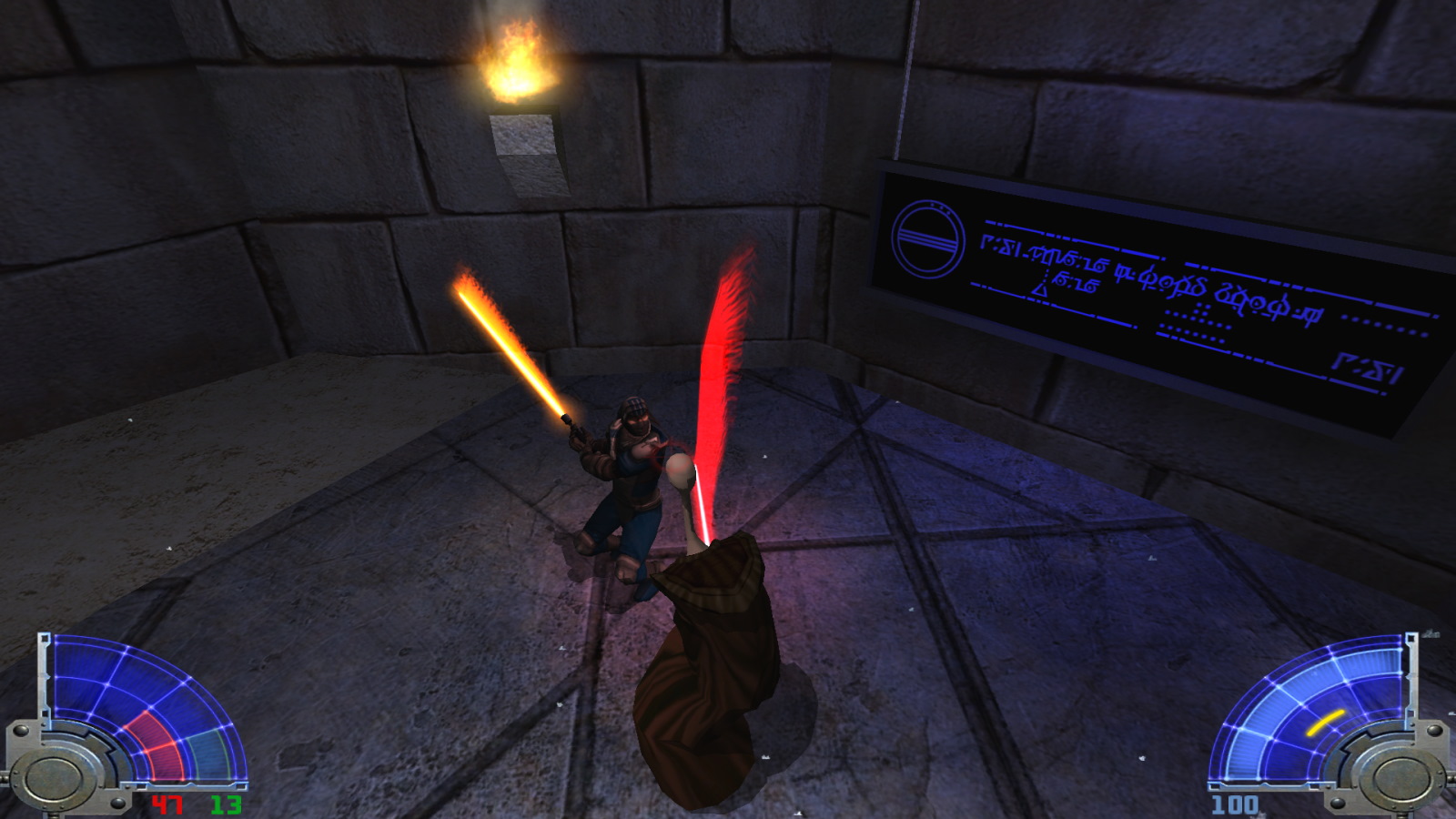 If you've not played Jedi Academy in a while and have upgraded to Windows 10, odds are good that you'll run into a brick wall the moment you try launching the game. Thankfully, modders have already come to your rescue. Even if you don't plan on playing anything game-altering, you'll want to grab OpenJK.

As the name suggests, it's an open source overhaul to some of the creakier parts of the game's engine. Mostly bug-fixes and improved compatibility with modern hardware and operating systems, OpenJK is also a pre-requisite for most modern Jedi Academy mods, although most of the bigger ones come with their own version included. You'll want to launch the game directly via the OpenJK single-player or multi-player .EXE files after installing this, but it does strip the game of any remaining DRM, letting you clone or move your installation independent of Steam.

Beyond OpenJK, you might have to poke and prod the game a little to get aspect-correct widescreen working properly. Consult the venerable PC Gaming Wiki holocron for the specifics. Still, once you've got that squared away, most of the mods below are easy to set up. Just make sure you've got a clean install of the game for any larger mods, as they tend to make their own changes to the Jedi Academy EXE and DLL files.

Escape: Yavin IV: The Lost Maps by "The Unbeholden" 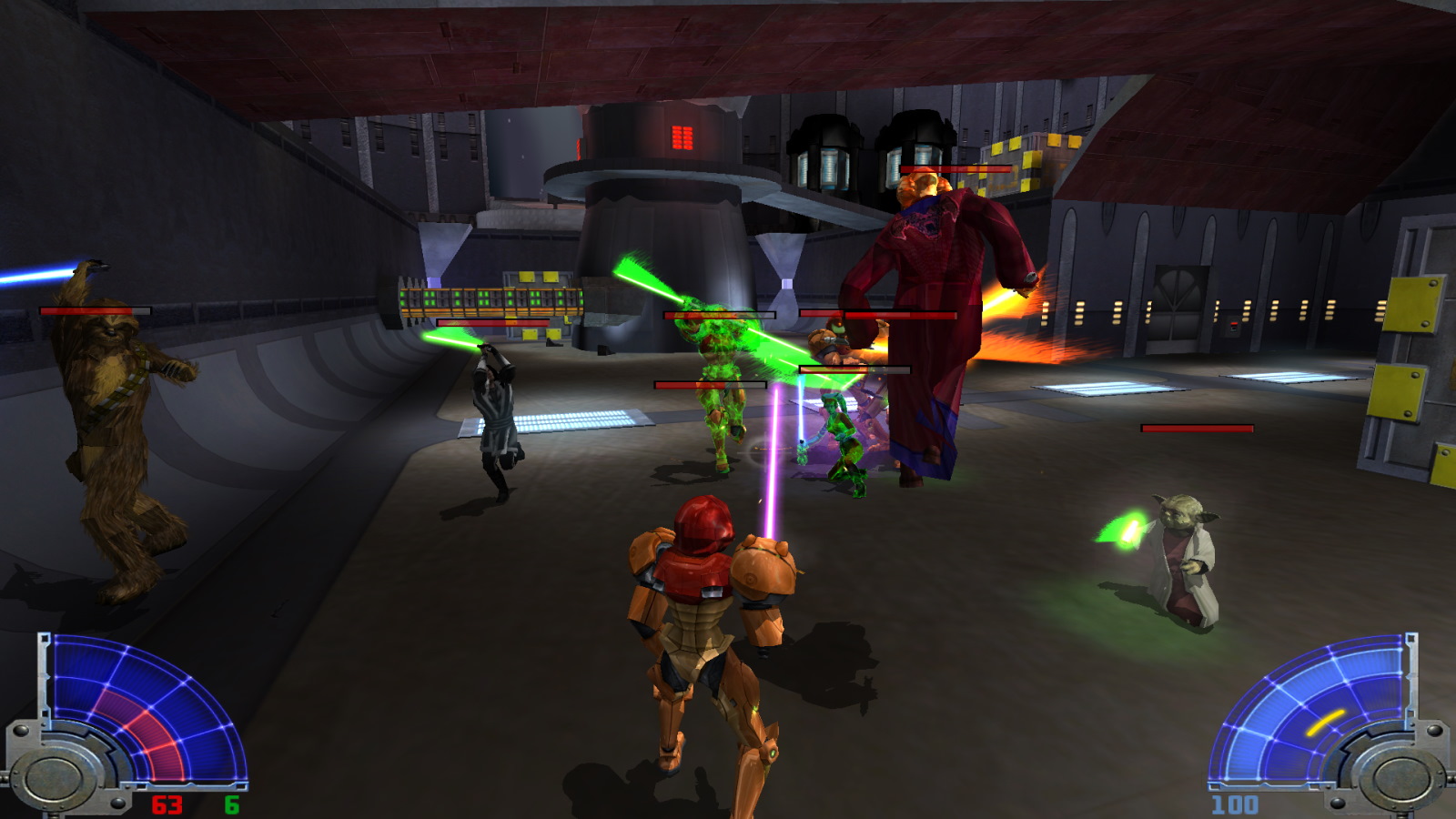 Recently demolished in under an hour live at Awesome Games Done Quick, don't let that video make you think this single-player campaign is anything shy of immense, easily dwarfing vanilla Jedi Academy. Continuing the story of your create-a-hero protagonist from the main game, there's a bit of clunky amateur voice acting, but it's fun if you're just after more levels to bound through and expendable goons to mash. As you may guess from the screenshot above, canon is a little strained here, but it does commit to a branching level structure and multiple endings.

Escape Yavin IV's design ethos is clearly 'go big or go home'. Some levels have enormous outdoor segments that you can't reasonably navigate without a speeder-bike. On the flip-side, there's not much fine detailing to the levels, and combat encounters can be a bit haphazardly designed. Quicksaving is highly recommended as lightsaber combat is even deadlier than usual, with you going up against enemies with some truly bizarre arrangements of laser-blades. Lightsaber claws? Beam chakrams? Silly, but you can collect them all - a good reason to scour these lengthy levels. 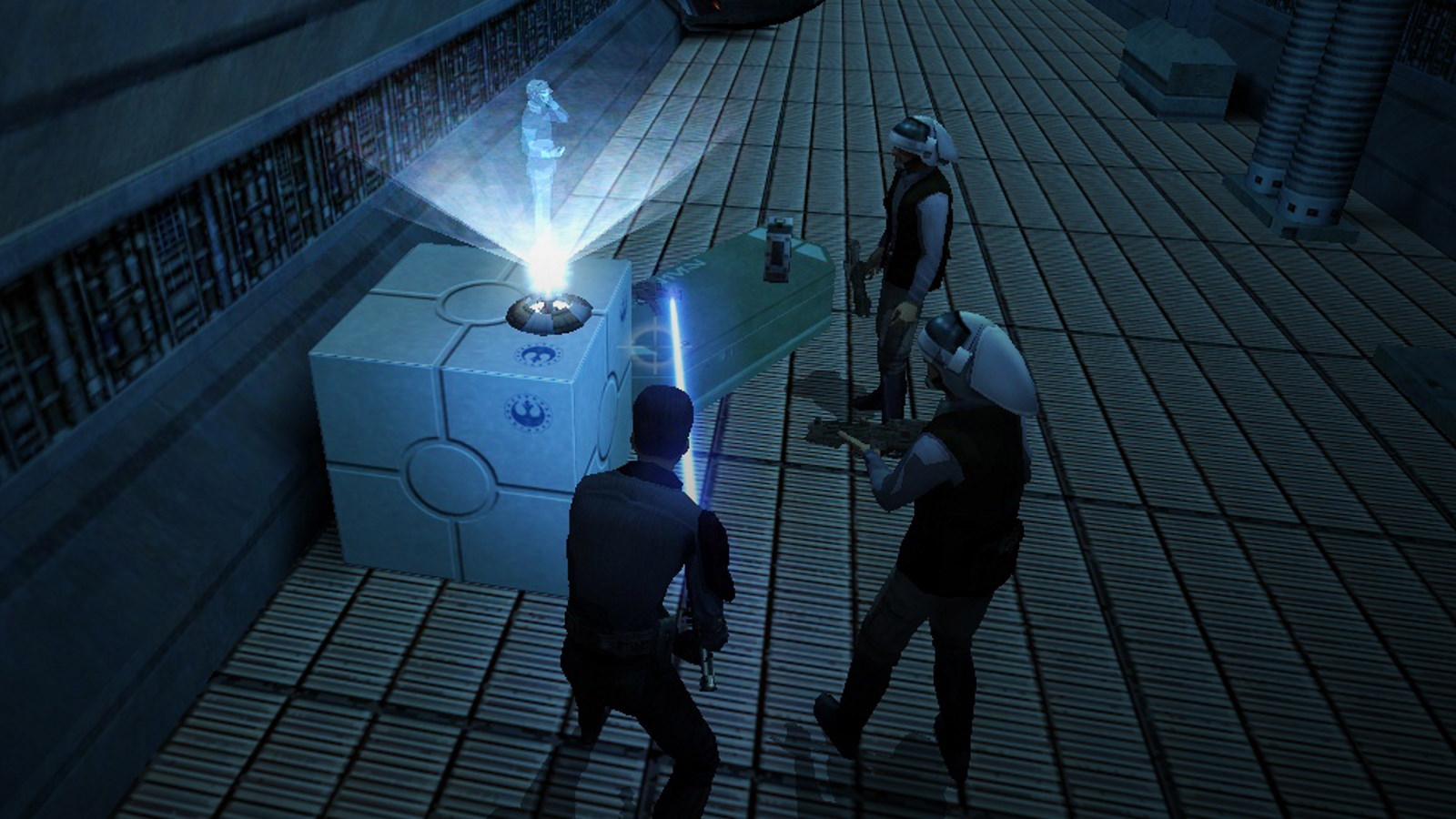 A brand new release from the Russian Jedi Academy modding scene, and a fresh single-player adventure starring Kyle Katarn: Ultimate Marty Stu. More focused and refined than Escape Yavin IV, it's one of the more polished solo campaigns I've played, although still balanced towards veteran players. If you don't mind quick-saving regularly, there's a lot to like, including some open-ended levels with multiple solutions, and a return to Coruscant as a between-mission hub. There's even a fancy new minimalist HUD.

The current release is just Chapter 1 of a planned series that has been in production a long while. According to the Mod DB blog, most of Chapter 2 is finished, so hopefully we won't be waiting too long for this to continue. Goofy title aside it's a story I'm interested in following, having a soft-spot for Kyle's beardy space adventures. Just remember to enable subtitles in the game options menu before playing if, like me, you don't speak Russian.

Movie Battles II is the biggest and most enduring multiplayer mod for Jedi Academy, popular enough to offer multiple full servers at most hours. This mammoth project expands on the already-solid Jedi Knight lightsaber combat with a complex point-buy class system. Pick an archetype (ranging from basic grunts to Mandalorians), one of dozens of character models, and then spend a pool of points on powers, weapons and stat tweaks. There's a lot of room for expressive play here, and hundreds of maps, ranging from famous Star Wars scenes to Metal Gear Solid battlegrounds.

While normally meant for large teams (servers can cram in 32 players per match), there's some alternate play-modes included. Lightsaber duelling maps are in, as are some vehicular battles, including an X-Wing Vs Tie Fighter space combat map I was especially taken by. It's an impressively professional production, right down to having a scripted and voice-acted tutorial, introducing you to some of the the new combat elements and extra controls you'll have to bind. There's an extensive in-game manual as well to fill in any blanks, and even some solid tips for playing each class.

If there's anything to hold against Movie Battles II, it's that it suffers from the same problems as any very old, niche shooter scene. New players are trying to break into a small, insular scene where player skill levels are sky high and text chat is frequently edgier than a vibroblade. Also of note is that this is an extensive mod, requiring its own clean installation of Jedi Academy. Installation is simple, though - just download the latest version, unpack to Jedi Academy\GameData and run the Movie Battles 2 launcher to pull down updates as required.

Don't let the similar name confuse you - this is as far from Movie Battles II as you can get, outside of a gleeful adherence to replicating Star Wars setpieces. Movie Duels is a mammoth single-player mod with a laser focus on recreating famous scenes (especially duels) from the movie series, plus a number of scenarios from The Force Unleashed. The maps here are impressively detailed set recreations, and battles are often book-ended with cutscenes featuring film dialogue. Character models are a cut above the regular game, and special effects are lovingly recreated. It's a looker.

Being focused on clashing spaceswords, the Movie Duels team have gone to great lengths to capture the spirit of the films, right down to each character's lightsaber stance and animations. While some levels have you hacking through waves of stormtroopers and droids, the focus of this mod is squarely on longer, more involved boss fights. Iconic battles have multiple possible endings, and there are a few fancy 'challenge' maps that will really push your mastery of Jedi Academy's quirky early 2000s melee combat.

If Movie Duels is the digital equivalent of playing with finely crafted Star Wars movie-set dioramas, then Knights Of The Force is a big daft toybox full of poseable action figures to smash together. On the surface it appears similar, but instead of focused, accurate recreations of famous Star Wars moments (although there are some of those), you're encouraged to make your own scenarios. Pick a level, set up squads and and keep on fighting until only one side is left standing. Then do it again. Or play one of the included scenarios.

Unlike Movie Duels, Knights Of The Force also has a broader everything-and-the-kitchen-sink focus, featuring heroes and maps from every Star Wars era. Setting them up to create your own battles is remarkably easy. From the built-in spawn menu, you can suspend AI to have them wait until you're set to play, assign characters to whatever faction you want, or order them to tag along with you specifically. While I'd rather be playing entirely new levels and player-made campaigns, it's easy to see the appeal of this toybox approach.

While it's geared towards single-player, Knights Of The Force has full multiplayer support as well, with a dedicated server tool available from the Mod DB page. While less balanced than Movie Battles II, it's still a fun little sandbox to play around in with friends. And if you're short on friends, there's full bot support, letting you set up your own silly team deathmatch scenarios.

Much like the Millennium Falcon, Jedi Academy may creak and groan a little bit under the weight of its countless refits and modifications, but it's still flying strong. With major mods like Movie Battles II and Knights Of The Force still updating regularly, and all new campaigns still being released, it doesn't seem like a wonky end to the current film trilogy has dulled anyone's enthusiasm. Games this enduring are a rare breed - here's hoping this academy keeps turning out star students well into the 2020s.