If you click on a link and make a purchase we may receive a small commission. Read our editorial policy.
Premature Evaluation is the column which explores the wilds of early access. This week, substitute Cian Maher leaps into the box and does a futureball header.

“You said you’d be here three hours ago,” my friend barks down the phone. It’s 5:30pm and I’m wearing a Harry Potter dressing gown, nursing a lukewarm coffee, and entering my 30th consecutive futureball match. “Sorry about that lad,” I say, feigning remorse. “I’ll be there in a bit.”

As you’ve probably realised, I’m not Steve Hogarty. I’m just filling in while Steve’s on holiday. Luckily, I intercepted quite a nice game. It’s called Steel Circus and it’s a futuristic sports ‘em up in the vein of Rocket League.

The premise is this: you’ve got six different champions, all of whom have their own special abilities. The space pitch is presented like a MOBA, and the way the game is played is very Rocket League-y, except a bit more nuanced. Instead of Hot Wheels toys that went through a 3D printer smashing into oversized footballs, Steel Circus’ sport is more in line with handball, if the ball was on fire.

This conglomeration of sports is a tad confused. It’s League of Legends handball, but there are football goals, and the scores are called touchdowns. Either Steel Circus was not made with real-world sports in mind, or it’s invented a new sport of its own, where robots can launch cannons at bagpiping Scotsmen and edgy suits can burrow underground to evade shield tosses from a cyber Viking. 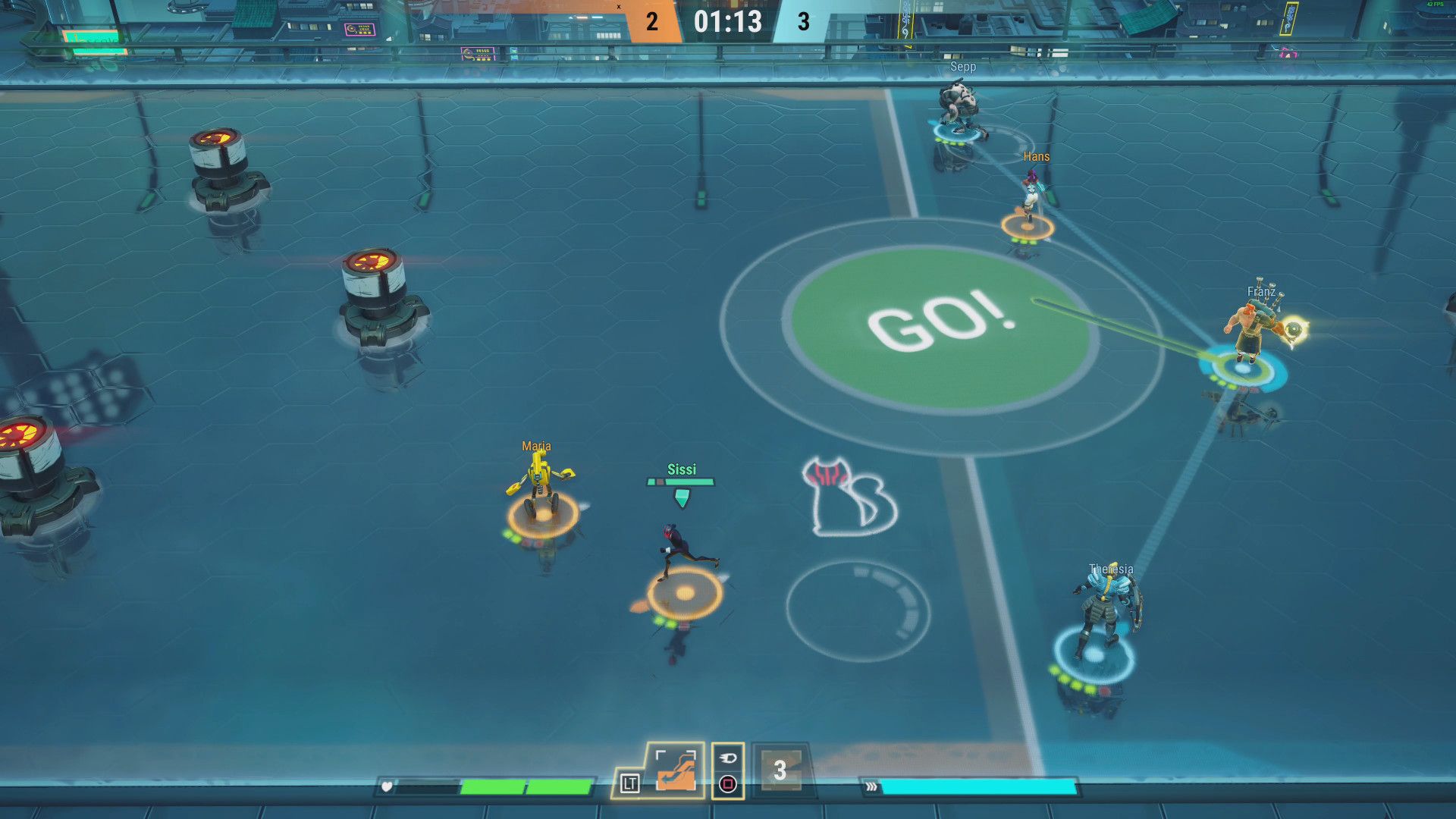 The learning curve is a little steep, and although there are training grounds, you need to figure most of it out yourself. I practiced shooting into an open goal for about 30 seconds before thinking, “yeah, I’ve got this,” and immediately searched for my first game. Matches are five minutes long, but automatically end if one team scores 10 goals before time runs out. Naturally, the first game was an unceremonious thrashing, the scoreboard reading 10-0 within 90 seconds. Not only was I unfamiliar with how to throw the ball, but both of my teammates were also incapable of puppeting their champions the way the game demanded.

Steel Circus’ best feature is the one it borrows from ice hockey: fighting. Characters have straightforward shoulder barge tackles but also special abilities [https://www.youtube.com/watch?v=znydmlKJOZk]. For example, Ellika, a cyber-armoured shieldmaiden, can trap opponents in a circular prison for a few seconds. And there’s a wheely robot called Cap-x02 who can summon a stubby barrier, just wide enough to block incoming shots. 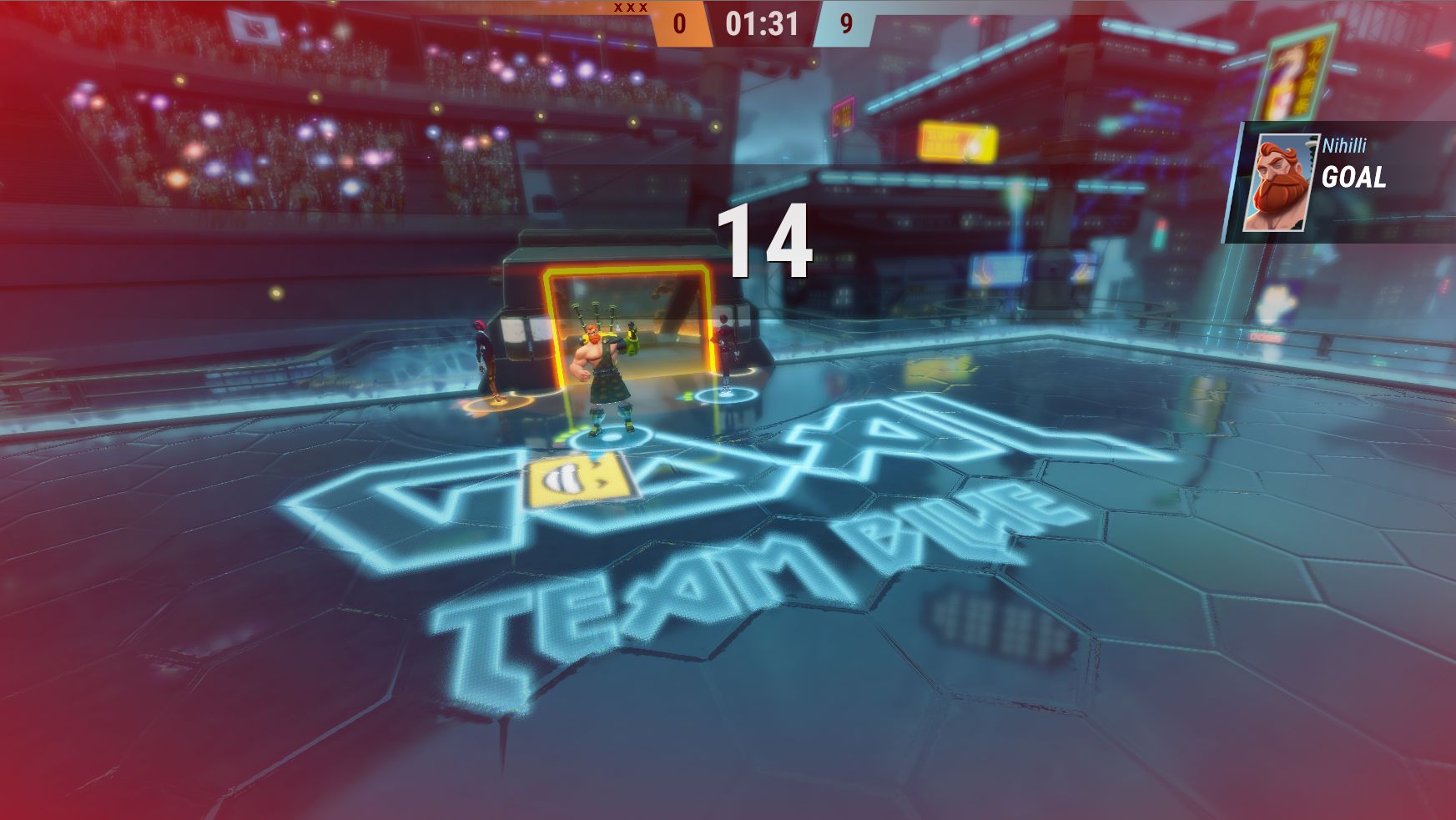 Every character has a health pool. If your health hits zero, you’re out of the game for 10-20 seconds. However, you can tackle people even when they don’t have the ball. Of the 50 or so matches I’ve played so far, I’ve gotten a “Defender” post-game card for at least half, meaning that I completed the most tackles in the game. Why? Because watching MOBAesque champions explode is hilarious. I often found myself more interested in blowing people up than scoring goals. That’s how I used to play football when I was younger. I wasn’t good at kicking the ball, per se, but I could run for a long time and tackle people well. It’s nice to see there’s a place for that kind of carry-on here.

It’s always 3v3, which leads to one of the game’s main flaws. In one match, I had a person on my team whose handle was literally Pelé. Pelé! Surely we were going to win. However, after a scoreless first minute, the opposing team managed to score a flukey geometry goal, misjudging a pass but fortunately having the ball bounce off a pillar near the goalposts.

Pelé ragequit (surprisingly unprofessional of him). And Steel Circus doesn’t draft new players into a game that’s already started. So we were 1-0 down, with about three and a half minutes to go and only two people on our team. My other teammate left immediately after, and I was stuck in a one-sided 1v3, too stubborn to leave. 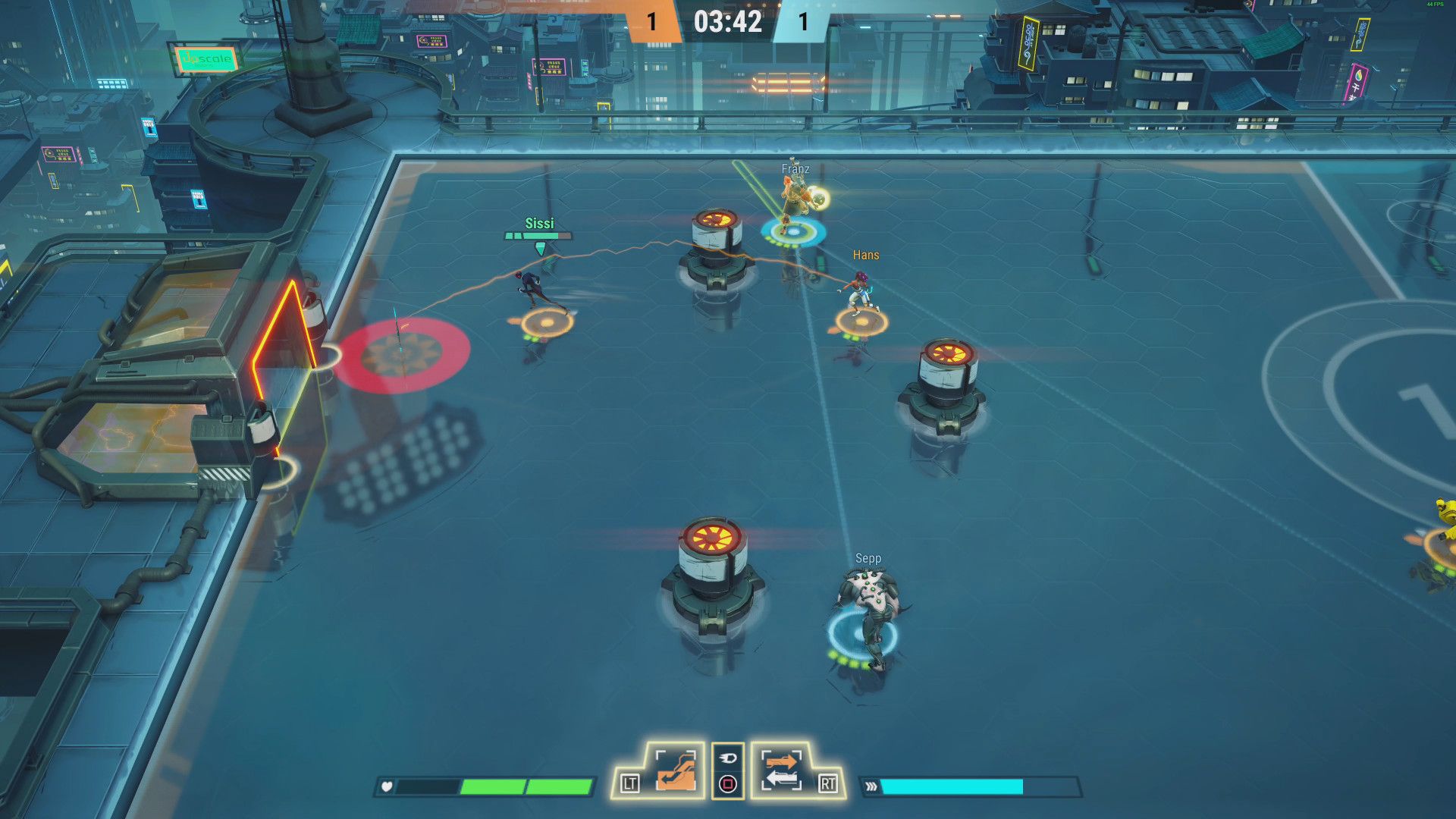 This does lead to curious situations. During one match, two players from the opposing team left, so one of my teammates decided to swap sides. There’s no official function for this, they just started passing to the other team’s remaining player and scoring own goals. It was a nuisance, because you can’t tackle your own teammates. Like a space age George Best, they dribbled circles around us, continuously hammering goals into the net they once swore to protect. Traitorous, unashamed charlatan. But, like most people capable of betrayal, this enigmatic double agent swapped again at 9-9, rejoining our team with only three seconds to go and leaving their once-teammate to suffer the woes of loss alone.

It also suffers from an absence of communicative features. There’s a dialogue wheel, which you can use to say things like, “nice shot!” or “my bad!” But there’s no text or voice chat, which makes planning difficult. Plus, some players are already good enough to dismantle uncoordinated teams on their own. One person I went up against chose Schröder, a slick champion with a strange red and black mask. They went full FIFA Street, bouncing the ball off the walls to pass to themselves and scoring goals that absolutely went against the laws of geometry. The ball physics are great, but this virtuoso was good enough to make Newton look like a bit of a spanner. They also used the game’s strange, twirly dodge function meticulously well. 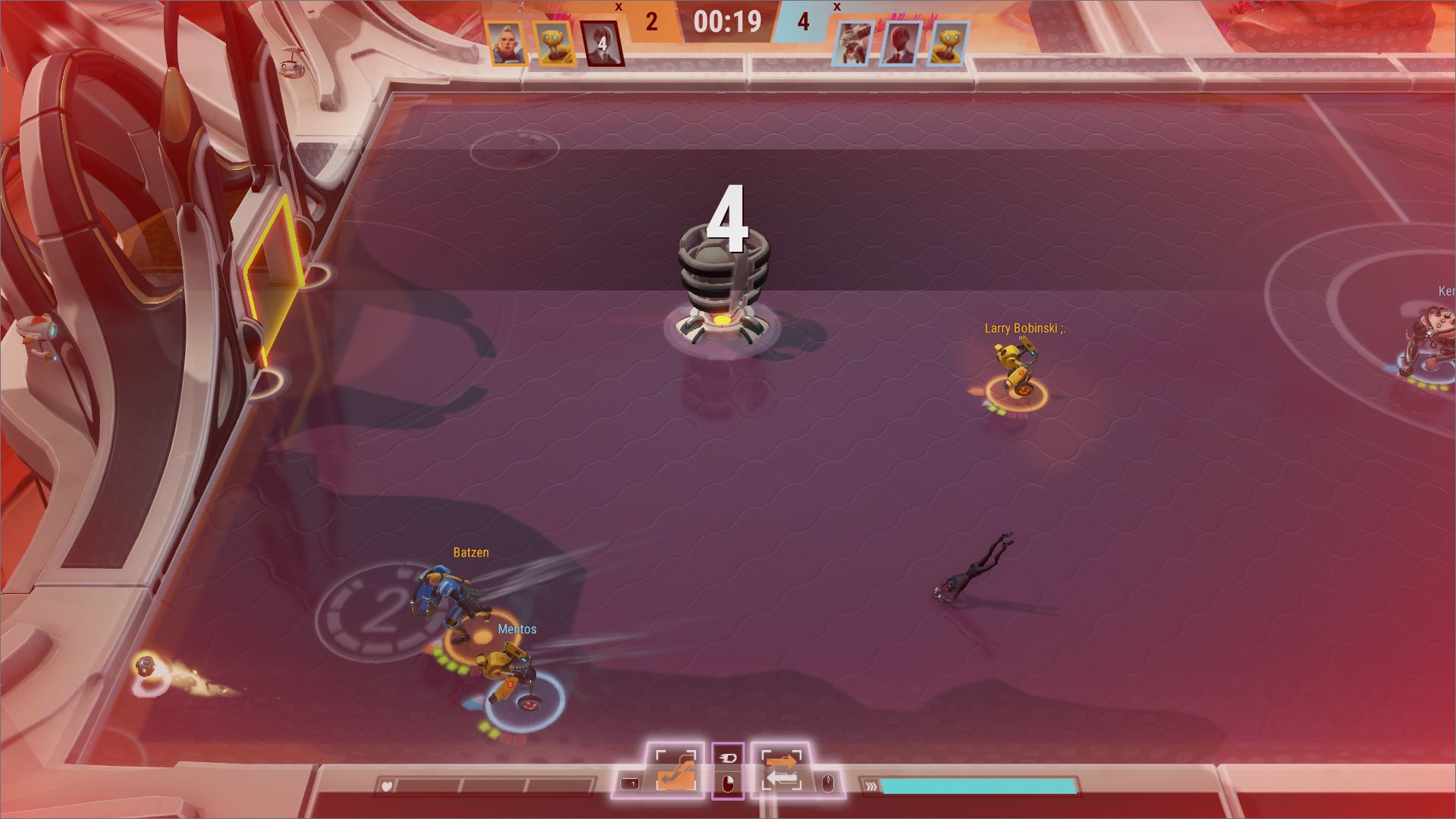 Aside from the lack of communicative functions and the ragequitters, the other bothersome thing about Steel Circus is that half of its roster is locked away behind a long grind for the necessary in-game currency (or you can pay for an "all current and future champions" pack). These champions aren’t noticeably overpowered, so it doesn’t matter a lot, but because there are only three champions available for free and every match is 3v3, 90% of games end up pitting the same champions against one another. Sometimes you’ll come across one of the three rarer characters, but encounters of that kind are few and far between. Then again, developers Iron Mountain Interactive aim to have 15+ champions in future, which will hopefully spice things up a bit.

Some matches go right to the wire, lasting minutes at a time without a single score. Also, incorporating ability-based mechanics into a futuristic sports game makes for a blend of genres that, if managed with care, could be a big thing. There are some creases but creased things can be scrupulously ironed out into lovely soft things, given time.