If you click on a link and make a purchase we may receive a small commission. Read our editorial policy.
Developer: SkyBox Labs
Publisher: SkyBox Labs

I heard a lovely story from a primatologist once, about how different apes tend to respond when faced with tricky wooden puzzle boxes. Orangutans, apparently, will sit and think for a while when stumped, and then work carefully at a new angle on the problem. Chimps, meanwhile, will typically lose their tempers, smashing the offending puzzle to splinters with their hellish fists. But gorillas - my dear, sweet gorillas - will just get a little bit sad, before ambling off to find some celery to enjoy instead. It's not that they're incapable of finding a solution, or that they're incurious: they're just not that desperate to know what's inside the box.

This is one of the many reasons I respect and admire gorillas. It's also why I had gigantic mixed feelings about gorgeous platformer Stela. Because although it's as pretty as anything and dripping with atmosphere, it's opaque enough to make J.J. Abrams' Lost seem like a childrens' story about a pig looking at an egg. It's a beautiful puzzle box with nothing inside it, and spends its entire, wordless length asking questions whose answers never arrive. If I was of a chimpen nature, this post would be nothing but a bared-fangs screech, delivered from a squatting position atop my wardrobe, with shards of smashed PC in my hands. But luckily, I played Stela with a gorilla's heart*, and so had no urge to winkle the truth from inside it with my big, leathery fingers. Go in with the same mentality, and you'll find a lot to love here.

* I played it with a mouse and keyboard; I'm not a fucking warlock. 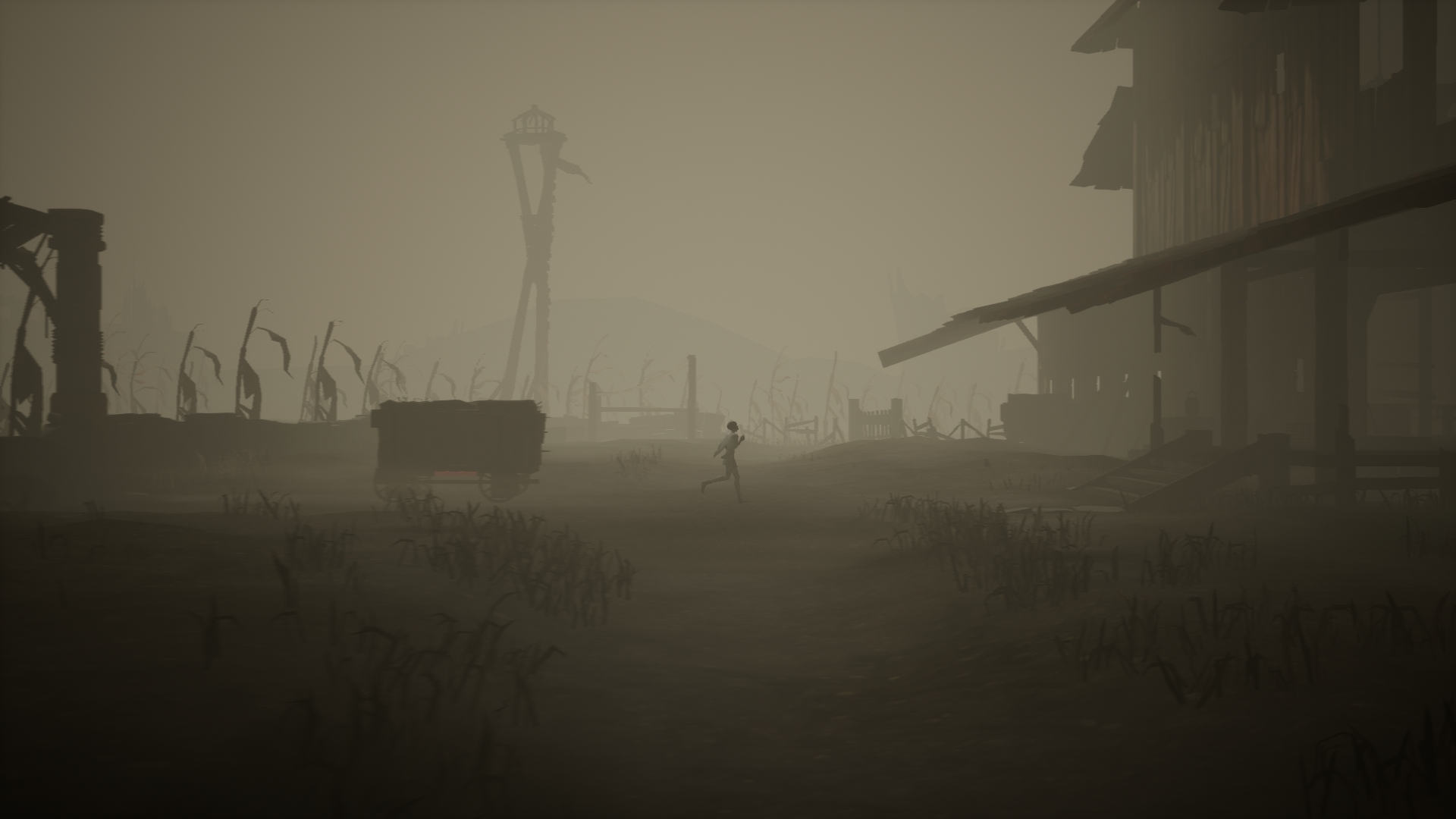 What other games is Stela like?
Probably your most direct comparison, tonally and aesthetically, is 2016's Inside, although 2010's Limbo is a close match too. Personally, I was really reminded of desolate trundle 'em up Far: Lone Sails from 2018, although others have compared it with 2017's deeply unsettling Little Nightmares.

Like 99 percent of mysterious stories of this sort, Stela starts with someone waking up beneath a mysterious glowing sigil, with no clues as to how they got there, what they're doing, and so forth and so forth. In this case, the someone is a person who looks a bit like 1977-era Princess Leia, and that's about all I ever found out about them. For the sake of readability, let's call this person Charlie Bungus. There's nowt to do in the initial cave, so Bungus climbs up a ladder, and begins to run through a distinctly knackered-looking fantasy world full of melancholy and danger.

Immediately, three things strike you. First, that Bungus feels tiny. They're a little running figure in a great big screen, and they seem at least a size too small for the world around them. The second thing is just how simple the game is. In a time saturated with the obsessive backtracking of metroidmania, it's refreshing just to move right in a platformer, and keep going. The controls, given that the game was designed for Apple Arcade, are just as simple. Bungus can jump, and they can interact, with objects that follow the elegant old design trick of being subtly marked out with a splash of red. You learn this as the third thing strikes you. The third thing is a tide of flesh-eating beetles. 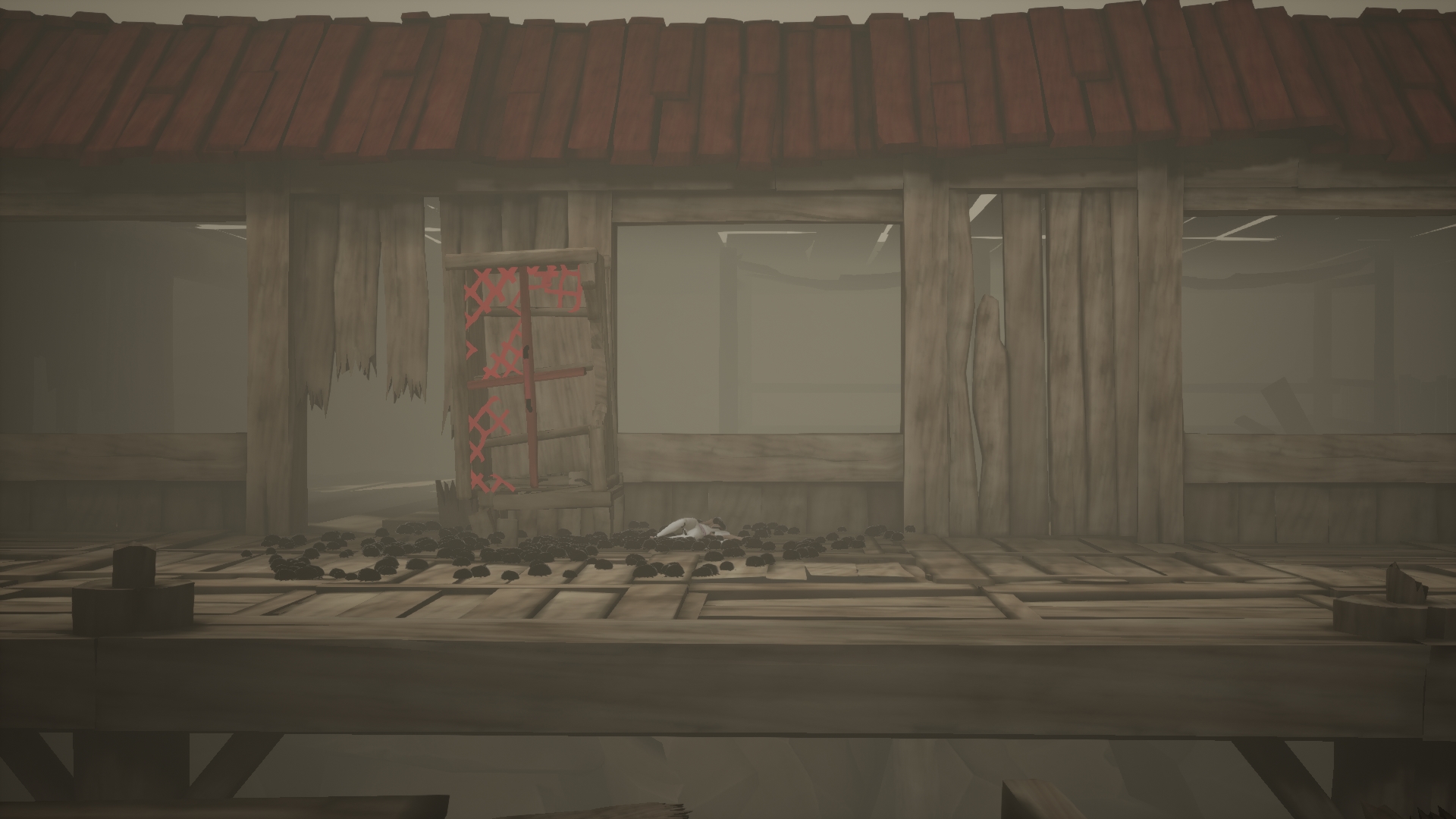 I got mullered about six times by the beetles, until I figured out what the game wanted me to do in the scant few seconds it allowed between their appearance and my demise at their mandibles. The same thing happened later on, in an old temple with a classic "descending ceiling" trap, where I had to brute force a puzzle through trial and error because I could only examine it in the seconds just prior to being mashed. It's very easy to die in Stela, and there are many points where you'll only know there's a danger to navigate by having first run straight into it.

Personally, and entirely subjectively, I could have done without some of that. It's not that the game's needlessly punishing (although it's certainly not a breeze by any means) - it's more that I felt the puzzles and pitfalls were getting in the way of what I was really loving about it, which was the business of moving through Stela's world. Developers SkyBox Labs pitch the game as "cinematic", and I'd totally agree with that. Its artwork is pitch-perfect, its sound design is stunning, and its levels do a great job of interspersing quiet traversal segments with showy set pieces. 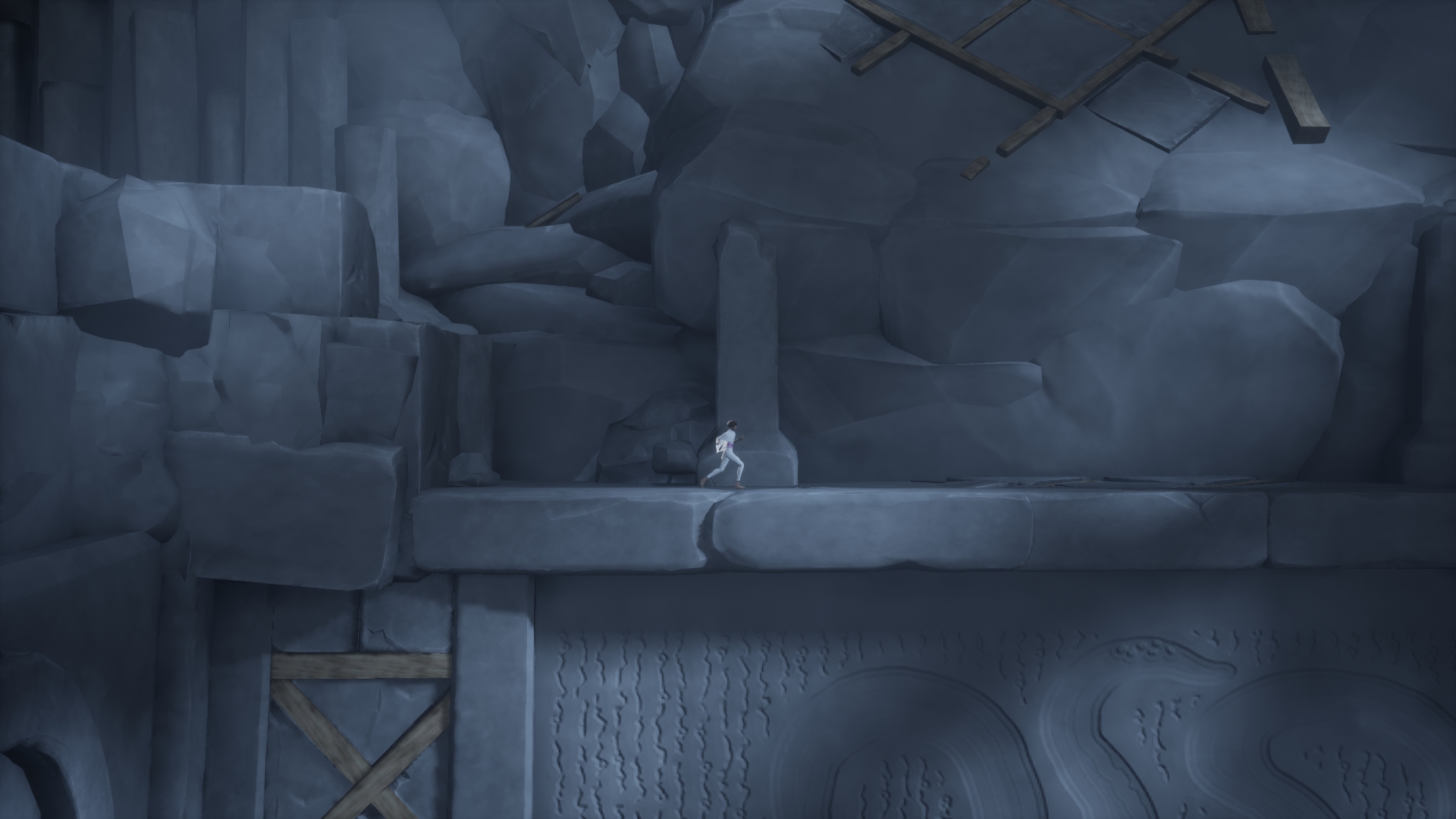 On balance, it would have been nice to just get on with taking all of that in, rather than having to keep stopping and doing bits over because I'd cocked something up. Imagine watching, oh I dunno, Thor: Ragnarok, let's say. But halfway through every action sequence, Chris Hemsworth pauses the action around him, turns to look straight through the screen, and poses you a non-verbal reasoning question. If you get the question wrong, you have to watch the fight from the beginning again. And yes, I'm well aware that I'm attacking one of the core historic principles of videogames here, but I can't lie - I'd have preferred watching an expert play through Stela, than playing it myself (and someone who knew what they were doing could probably honk it out in 90 minutes, while it took me, dunderhead that I am, just under three hours).

I'm going to lavish a bit more praise on Stela's sense of atmosphere, now, since it did some extraordinarily heavy lifting in raising the game in my estimation. There are roughly eight levels in the game, and I say 'roughly', because many of them blend into each other. Each is identified by an exquisitely distinct colour palette that immediately sets its tone: a beige forest haunted by big angry gollums, the fire-lit sky of a city under siege, an underground temple that somehow looks the exact same colour as the feeling of cool stone against skin, the livid, chthonic brown murk of a monster-haunted chasm. All the colours are muted to match Stela's autumnal, dying-world ambience, and both tone and composition are used deftly to suggest depth. It's probably the most beautiful games I've seen this year. 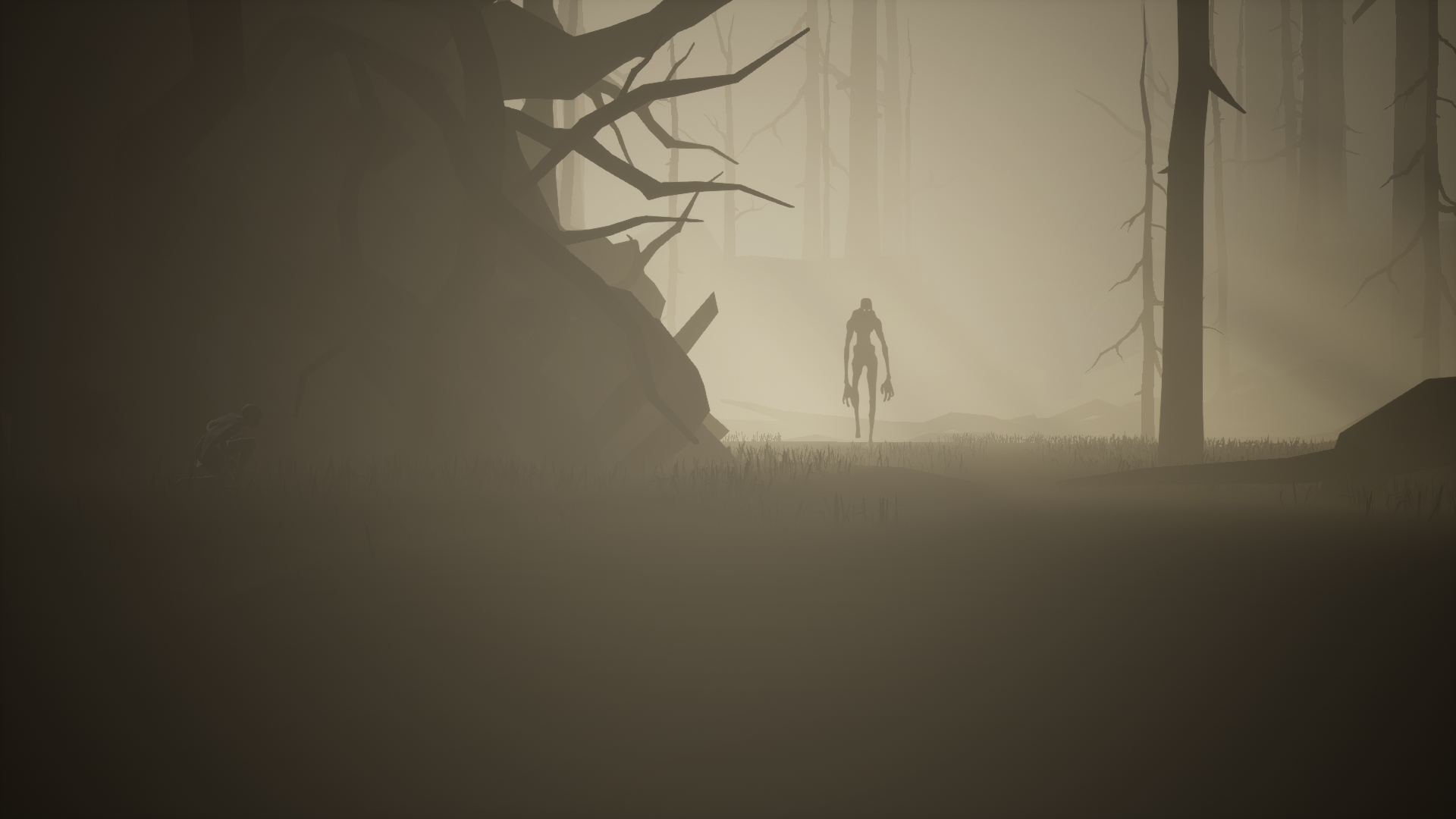 The music is of a quality to match the visuals, too. There are long patches of windy silence to accompany quieter bits of play, and big, sad swells of ambience to accompany transitions into areas of particularly striking scale or beauty. Sometimes the sound design's a bit Brian Eno, sometimes it strays into the aching melancholy of The Banner Saga's sad Nordic hurdy-gurdies, and sometimes it's pure highbrow horror: frantically plucked cellos to accompany onrushing beetle hordes, or terrifying, near-infrasonic lowing to accompany the emergence of a beast of implausible size.

And there are no voices. Not even the little musical trills that sometimes stand in for dialogue in games like this, because there's no dialogue to stand in for. There's not a word in the game, except for its title, unless you count the occasional glowing sigil or two. And that's not a problem in itself, but it is tied in with the main thing that left me a bit disappointed with Stela. 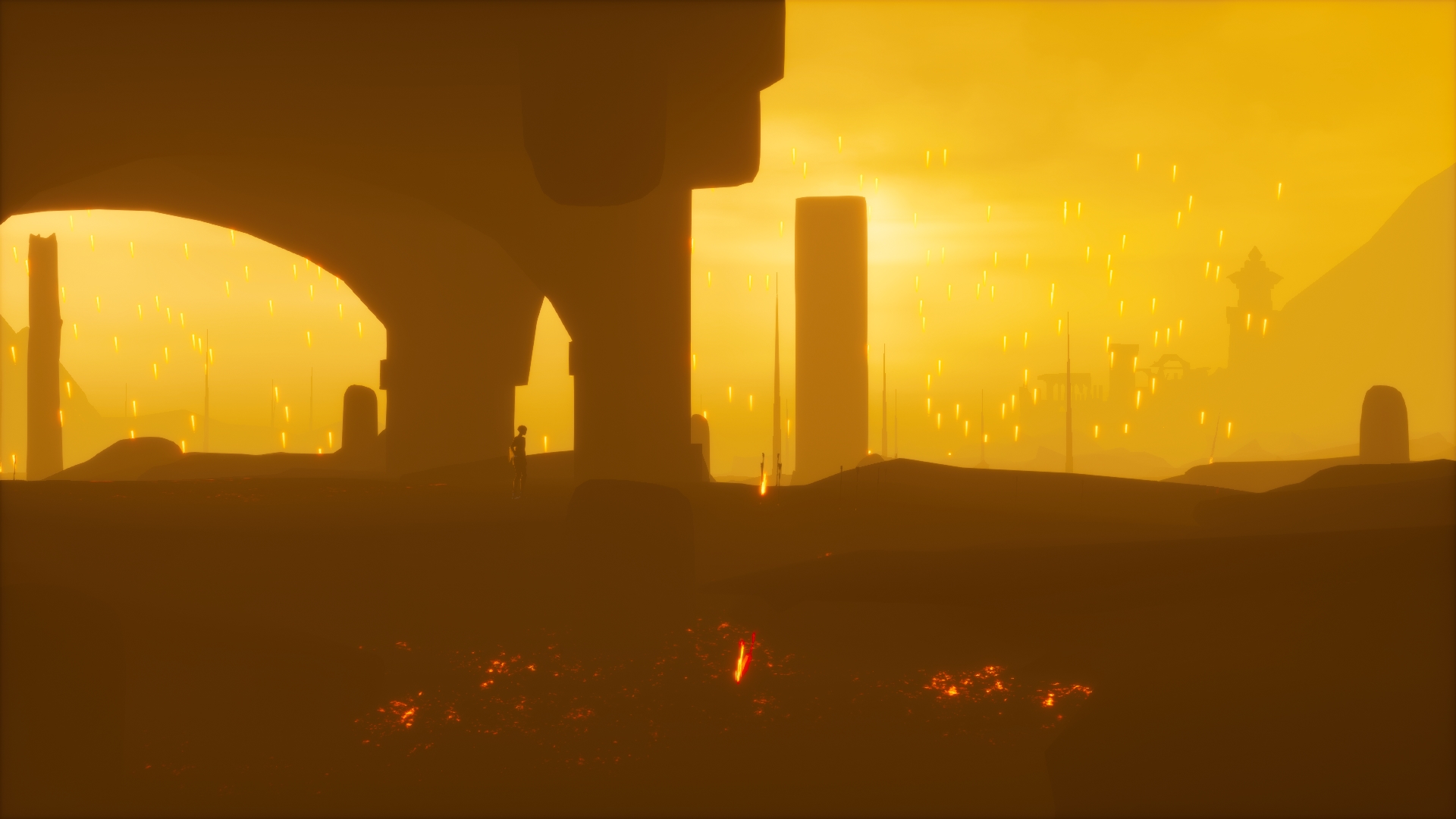 Interestingly, SkyBox labs are co-developing Halo Infinite with 343 Industries. And having played Stela, I'm actually more enthusiastic about that game. Because Halo, of course, already has a story behind it. And if SkyBox can apply the same sort of atmospheric touches to Infinite as they've shown they can produce with Stela, it's going to be an extremely rich world to play in.

Now, I get the principle of implied narrative. I know that it's perfectly valid to leave much of a story up to interpretation, especially when working in a visual medium, and to expect the viewer to do a certain amount of work in putting together their own explanation of what's going on. A good few games - Journey is probably the best example - have won a hell of a lot of acclaim by taking this approach. But there still needs to be some kind of story. And with Stela, I got the impression that SkyBox simply put together a big list of stuff that would look really cool and atmospheric, strung the ideas into a game, and assumed the player would either come up with their own explanation for it all, or just assume that whatever was going on was too super-deep and artfully implied for them to piece together.

This wouldn't be so bad, if the game didn't constantly give you the feeling that an explanation will only ever be a few screens ahead. Right from its opening moments, it's setting out questions: Who is Charlie Bungus? What does the glowing sigil mean? Who built this abandoned farm? Who are the big angry gollums, and what are they digging for in the woods? What is the big stone they worship? Who's besieging the city? Why has this monk rescued me? Was this underground temple built by the same generic glowy sci fi precursor culture who made the place I woke up in? But the answers to those questions are never so much as hinted at, let alone revealed. I got to the end of the game expecting at least some small measure of revelation, but there was... well, for the sake avoiding spoilers, I'll just say there's nothing really to spoil. 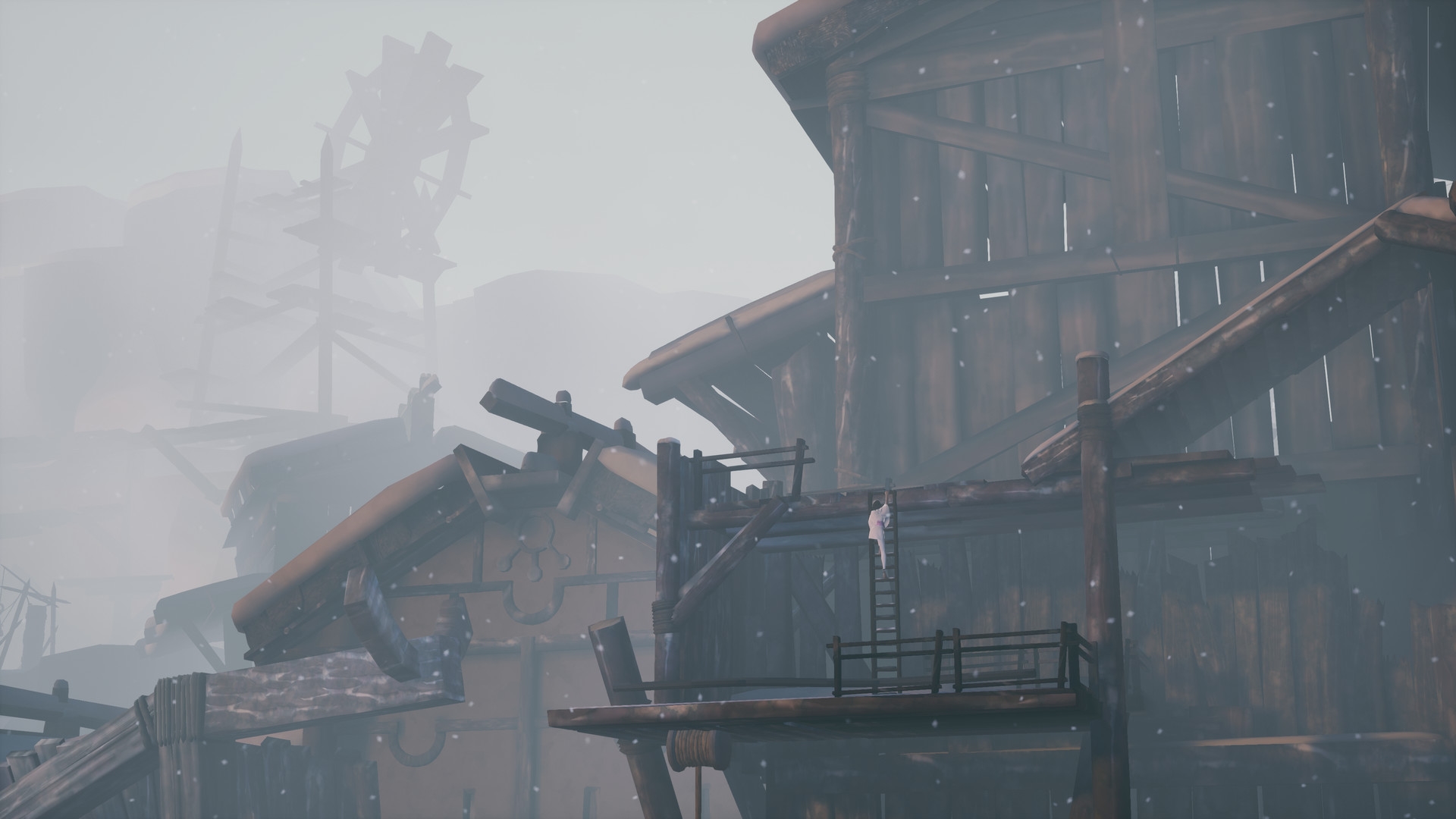 I don't know. Maybe I'm just a philistine with no taste for subtlety. Or just thick. But either way, I felt increasingly annoyed by the game's soaring questions-to-answers ratio, and it left me with very little investment in poor old Charlie Bungus. With no idea who they were, what they wanted, what they were tasked with, or what was at stake, I found it near-impossible to care what happened to them.

And here we get back to my opening paragraph about gorillas and puzzle boxes. Because, and I will be completely honest here, I got halfway through the game on my first attempt, before getting completely bored with waiting for the game to stop being so bloody coy. The trial-and-error approach to deaths and puzzles mentioned above didn't help, as it made me feel I was having to really work for what I was increasingly convinced would be a slim narrative reward. In the end, I wandered off for metaphorical celery, and it took me the best part of a month to come back to Stela in order to finish this review. I'm glad I did, as it still had some astonishing sights left to show me. But it was a close call. 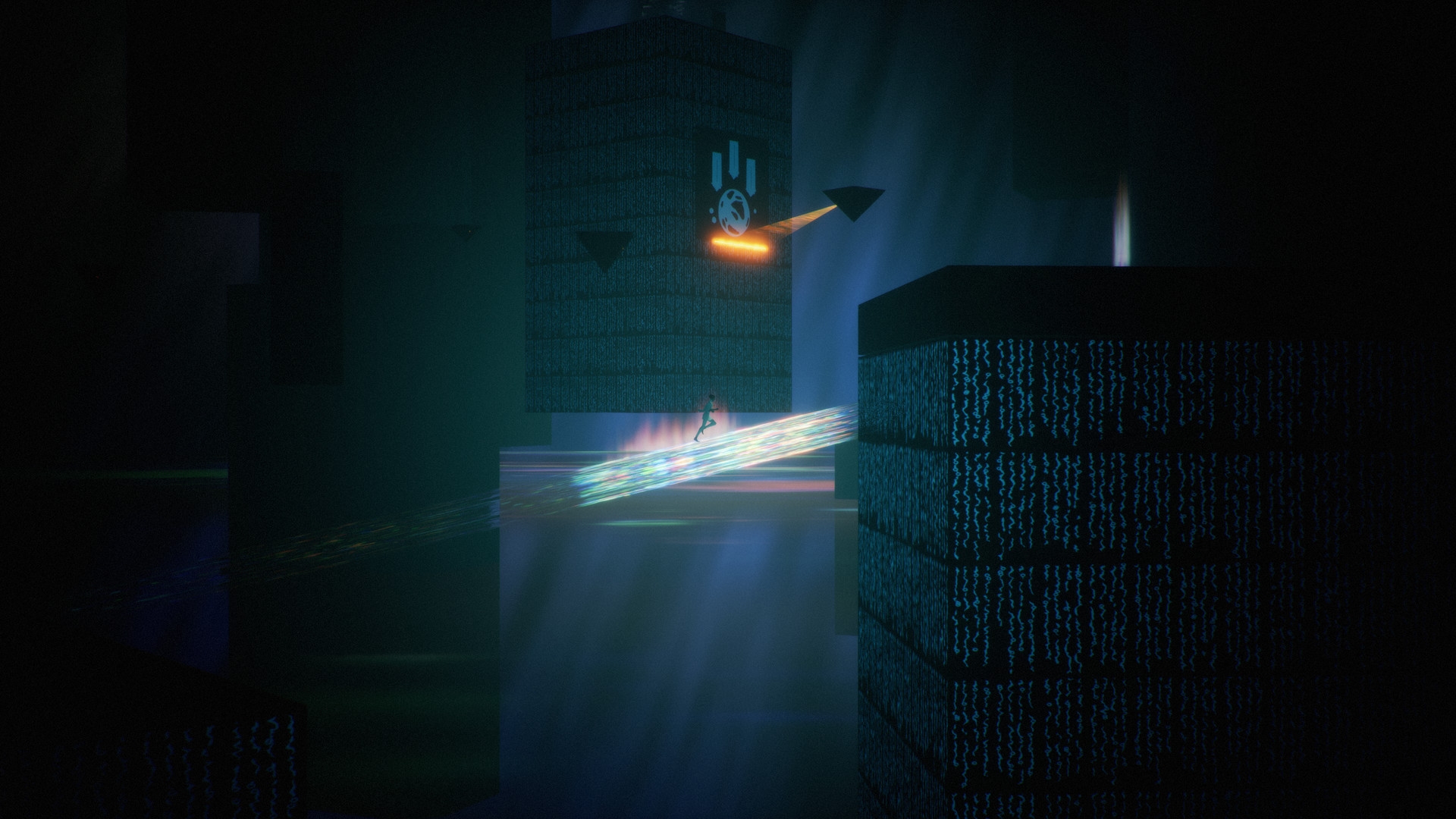