Premature Evaluation is the weekly column in which we explore the wilds of early access. This week, Fraser's trying to run a successful ocean rescue service in Stormworks: Build and Rescue by building the greatest helicopter ever invented.

I don't get seasick. I get sea hungover, but that's really my own fault. The wave of nausea that slammed into me as I piloted my tiny bouncing boat towards a nearby island came as something of a surprise. Between the exaggerated physics and frequently foul weather, Stormworks' ocean is a vomit-inducing nightmare.

It's my job to fight it. 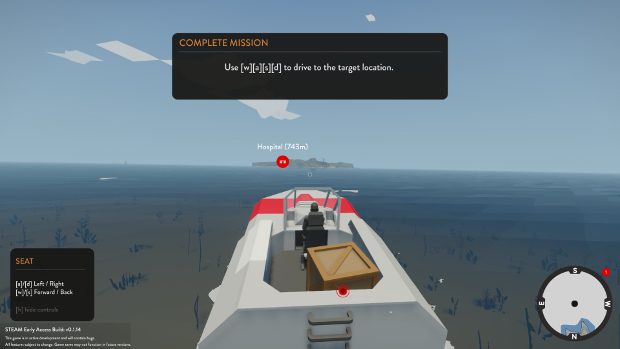 The reason I'm being tossed around in this unforgiving sea is that I'm a hero, ferrying essential medical supplies to an island hospital. This is a normal day in Stormworks: Build and Rescue, which describes itself as "a world where you design, create and pilot your own sea-rescue service." There were a couple of false starts for my own rescue operations, mostly thanks to my cargo falling out of the boat, but now I'm well on my way. I arrive at the island, making great time, my victory only slightly diminished by my three failed attempts to get from my boat to the dock.

I'm not really sure what the hospital is doing here. There are no other buildings that I can see, and the hospital itself is empty of patients. Hmmm. It seems a bit like a scam, frankly. Am I actually just delivering a bunch of drugs to somebody's house and not, in fact, a hospital? These questions are above my pay-grade, so after getting stuck in a door and then somehow forcing the box through a pane of glass, I eventually drop off my cargo and head back to base. 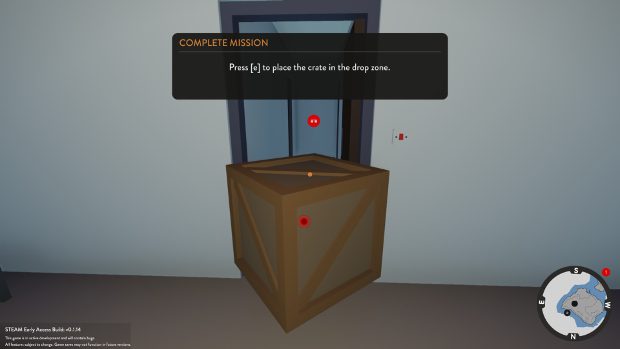 With my first mission over, I'm free to take on any missions that crop up and develop my company, earning money that can be spent on parts and new vehicles that will help me save every single person this watery bastard attempts to kill. But there's a problem: I'm not patient enough to work my way through the missions using this one bouncy boat. I want all the money and parts right now. I retire after one mission and fire up the creative mode.

In creative mode, you can still take on missions and generally do everything you can do in career mode, but without restrictions. There's no money to worry about, and every vehicle part has already been unlocked. Including helicopter parts. 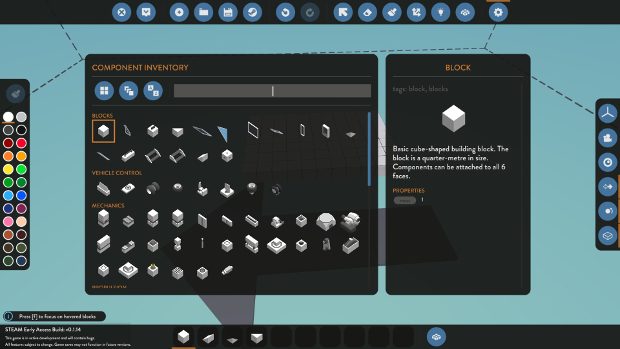 Since I'm not particularly keen on the idea of performing the rest of this Premature Evaluation while sitting in a pool of my own vomit, getting back into the water really isn't an option. No, I'll be up in the air, gliding gracefully over the ocean, rescuing people from above like some sort of aviator-wearing angel. It's going to be rad.

Obstacle number one: I haven't got a clue how to make a helicopter. Every vehicle in Stormworks is made up of little blocks, mechanical parts (decorative ones too), and finally the logic connections that actually make it work, linking up buttons, engines, gyros and rotors. At first it looks like you need an engineering degree, but it's surprisingly simple once the steps are broken down. The tutorial offers some help if you want to build a boat, but I ended up on YouTube to find help when making my first chopper. 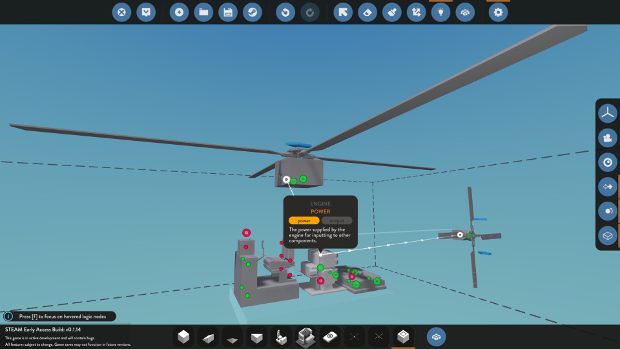 Within 10 minutes, I've made a heck of a lot of progress. Sure, it's just a skeletal frame, but all the important bits are there. A comfy seat for my tired bottom, a big button, and even bigger rotor. She doesn't look like much, but to a drowning sailor, I'm sure she'll look like the most beautiful thing in the world. But before I can start saving everyone, I need to see if she'll fly. 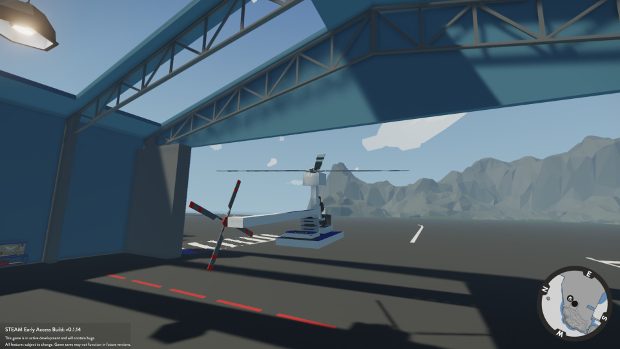 Flawless. Even the ridiculous controls that force you to use both the WSAD keys and the arrows can't get in the way of this inaugural flight. Despite not exactly following my YouTube tutor's instructions to the letter, everything works exactly the way it's meant to. I could probably start rescuing people right now, but since I feel a bit more confident with the construction tool, I decide to go back to my workshop and start tweaking. At the very least my chopper deserves a nice coat of paint and perhaps some decorative touches.

I go through various iterations until I'm finally inspired by some gross birds outside my office window. Destiny. With my creativity firing on all cylinders, I rapidly transform my chopper skeleton into a striking piece of practical art. Behold, RESCUE GULL. 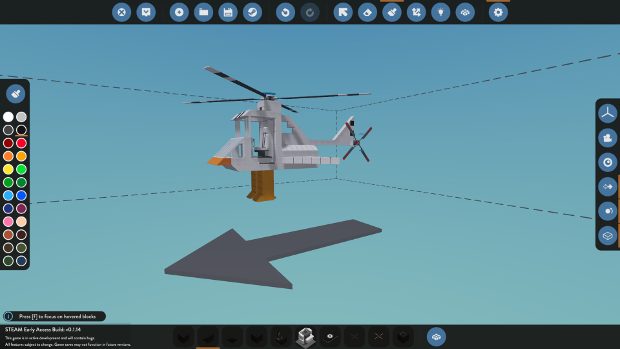 Part seagull, part helicopter, also looks a lot like a chicken – she's got it all. I'm pleased with myself. But how does she handle in the air? 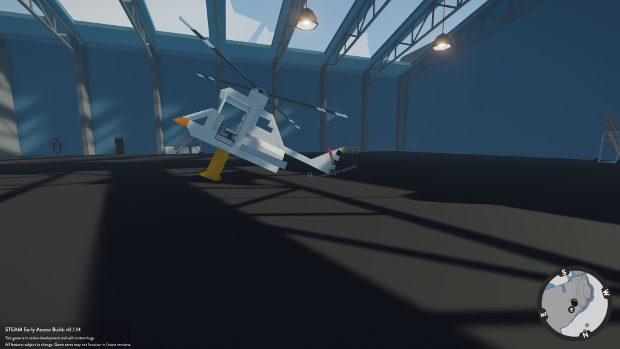 This... isn't a great start. However! Helicopters don't actually need to stand. All the hard work is going to be done in the sky. Getting inside is a bit tricky, since I need to hit 'F' at just the right moment while I'm jumping to get into the pilot's chair. But I do it, because I'm dedicated. And, incredibly, she does indeed fly. 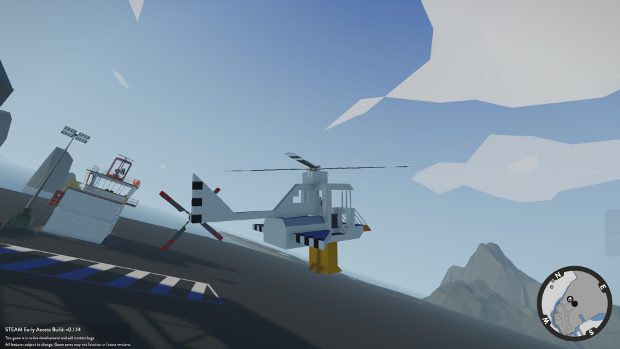 It's definitely a lot harder to control RESCUE GULL, but after some shouting and key-smashing, I finally get her stable and... 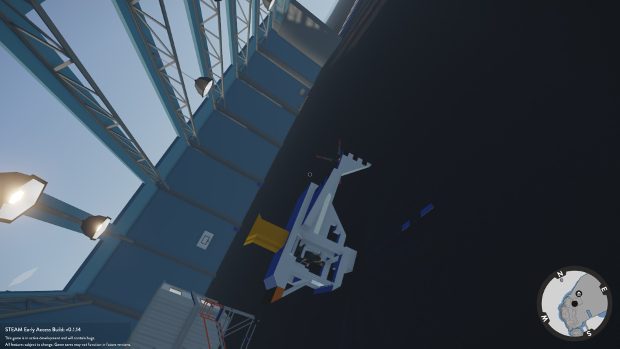 OK, so I obviously have some tinkering to do. It's fine – this is all a learning experience. Balance seems to be the most notable issue. RESCUE GULL is too heavy at the back and it's tipping her over. She's just too long for a single pair of bird legs. I once again look to the animal kingdom for inspiration. That's when it dawns on me: four legs! 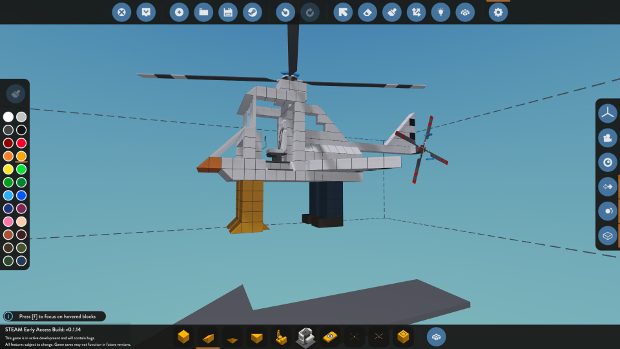 Since seagulls (and chickens) only have one pair of legs, I have no frame of reference for what they would look like with four of them. I'm pretty sure I've nailed it though.

Leaving the workshop, I'm greeted with a glorious sight: RESCUE GULL is standing in the hanger, perfectly balanced. This is undoubtedly what a parent feels when they see their spawn walk for the first time, but this is better because it's a helicopter-bird-man. I climb into the cockpit and prepare for my mission. I've got to stop a runaway ship. Exciting! 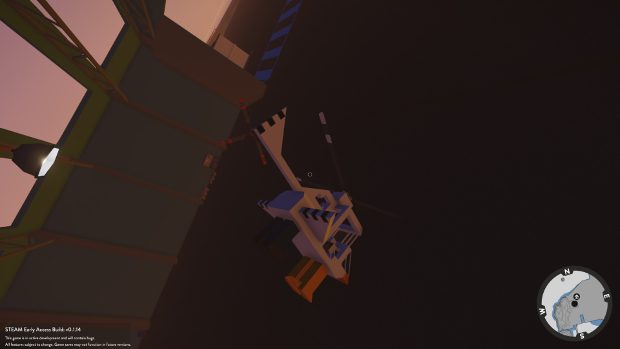 Why is this happening to me?

All these extra legs (and the admittedly superfluous but thematically appropriate wings) have made the helicopter too heavy, I think. It's fine when stationary, but the moment it takes off it starts to careen wildly and I barely have any control. Luckily, I know exactly what I need to do. I'm starting to really understand the way helicopters think. 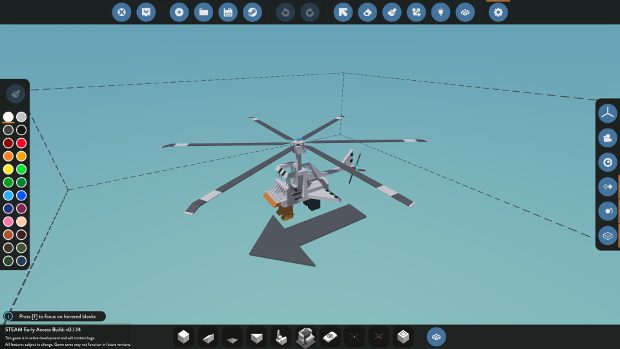 A much larger rotor is what I need, and conveniently I have a very large rotor in my workshop. With a few adjustments, it's fitted. Unfortunately, all this tinkering has wasted the entire day and it's now pitch black outside. The runaway ship isn't going to stop just because the sun has set, however, so I can't either. I chuck a few lights onto the helicopter and connect them to my power button, and with that, I'm ready to go. Again.

When I hit the button, I worry the whole thing will just explode, but against all the odds, it takes off perfectly. Sure, it still feels heavy and unwieldy, but at least I can pilot it now. I fly off into the night, after the runaway boat. It's a bit hairy. After a few close shaves with the water, I manage to get RESCUE GULL under control again, sort of, and will it towards our rescue target. Far from the coast, it becomes impossible to tell where the sky ends and the water begins. Up is down, down is up, seagulls are chickens – it's not a relaxing flight. 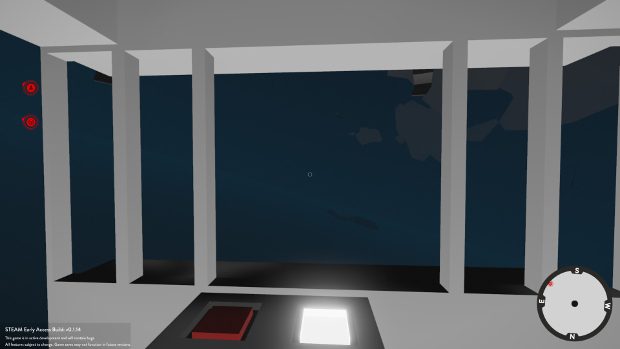 The real difficulty comes when I finally get close to the ship. I have lights, but no searchlight, so I have to get very low to see the boat. That's when I realise I haven't planned this very well. How am I going to stop the boat? It's too small for RESCUE GULL to land on, and I don't think I could airlift it even if I had the right tools, which I don't. Ramming it from above, I quickly discover, is not effective. This leaves me with one risky option: jumping.

I get out of the seat and launch myself from the helicopter, right above the fleeing vessel. Unfortunately, I mistime the jump and land just behind the boat, in the water. It's right in front of me, though, and there's a ladder on the stern. I swim as fast as I can, barely able to see over the waves, but with every stroke, the boat just gets further and further away. 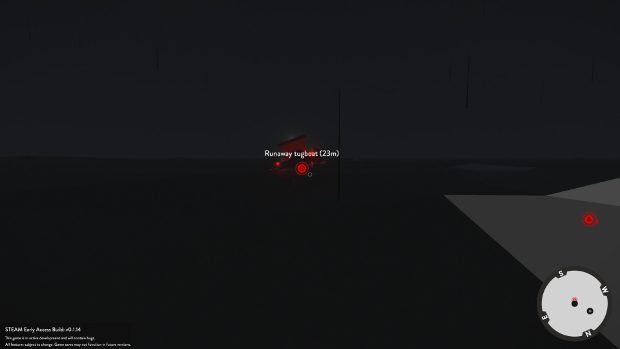 It's gone now. Completely out of sight. And I can't see the helicopter either. I'm stuck in the middle of the ocean. I might not be cut out for this.

When I get back to base (thanks teleport button!), it's daybreak, though you could hardly tell by looking outside. It's nasty even by Scottish standards. Ominous, grey and wet. I watch the rain for a while, trying to figure out what to do next. I look back at RESCUE GULL, my greatest folly. I look deep into the bits of paint above the windows, since I guess they're kind of like eyes, and I can tell she's had enough. 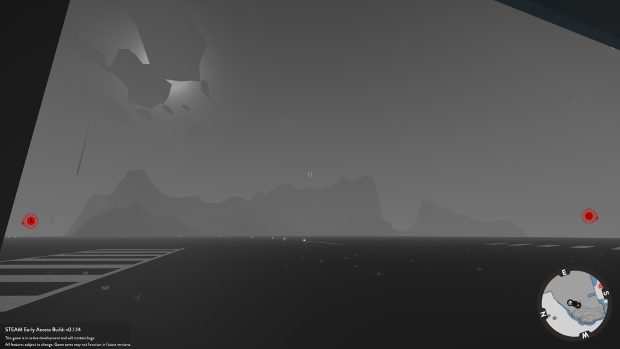 The runaway boat is going to have to wait for someone else to stop it.

If you actually have some talent and patience, you might be able to build something as elaborate as this. Or this. The workshop, especially in creative mode, really is a treat, letting you make proper rescue vehicles or just something dumb that probably won't work. Just remember to bring a sick bag when you take them out for a spin.