If you click on a link and make a purchase we may receive a small commission. Read our editorial policy.
Developer: HZ3 Software
Publisher: AGM Playism

Entering into its deeply peculiar world, Strange Telephone offered up so many things I love. A bizarre, bulky aesthetic, creepy undertones and surreal locations, and a unique mechanic that made exploration feel novel and interesting. Until it really, really didn't. In words I never thought I'd type, this is a game that's too strange.

The concept is wildly peculiar from the off. You play as Jill, a girl trapped in a room with a locked door, accompanied only by a floating telephone called Graham. Dial any six-digit number on Graham, and you're transported to another world, each around a single screen wide. Here you can remain, or move to neighbouring worlds, until the rapidly increasing glitching becomes too much and you're dissolved into the ether. Or hang up beforehand. In these lands, you discover inventory objects and interactive items, and must puzzle out what is used on what and why. All, seemingly, with the intention of finding the key to escape your core chamber.

These interactions aren't exactly normal, either. The worlds you find are bleak, dark places, populated by twisted wraith-like creatures and plants, or sobbing figures, or, er, roadworks. That sort of thing. Found items can be used relatively instinctively - an axe (strangely shown as a machete) is used to chop stuff, for instance. A watering can is used to pour water on things. But it's what you're watering, plants with eyeballs, withered sentient candies, that makes it all so weird. 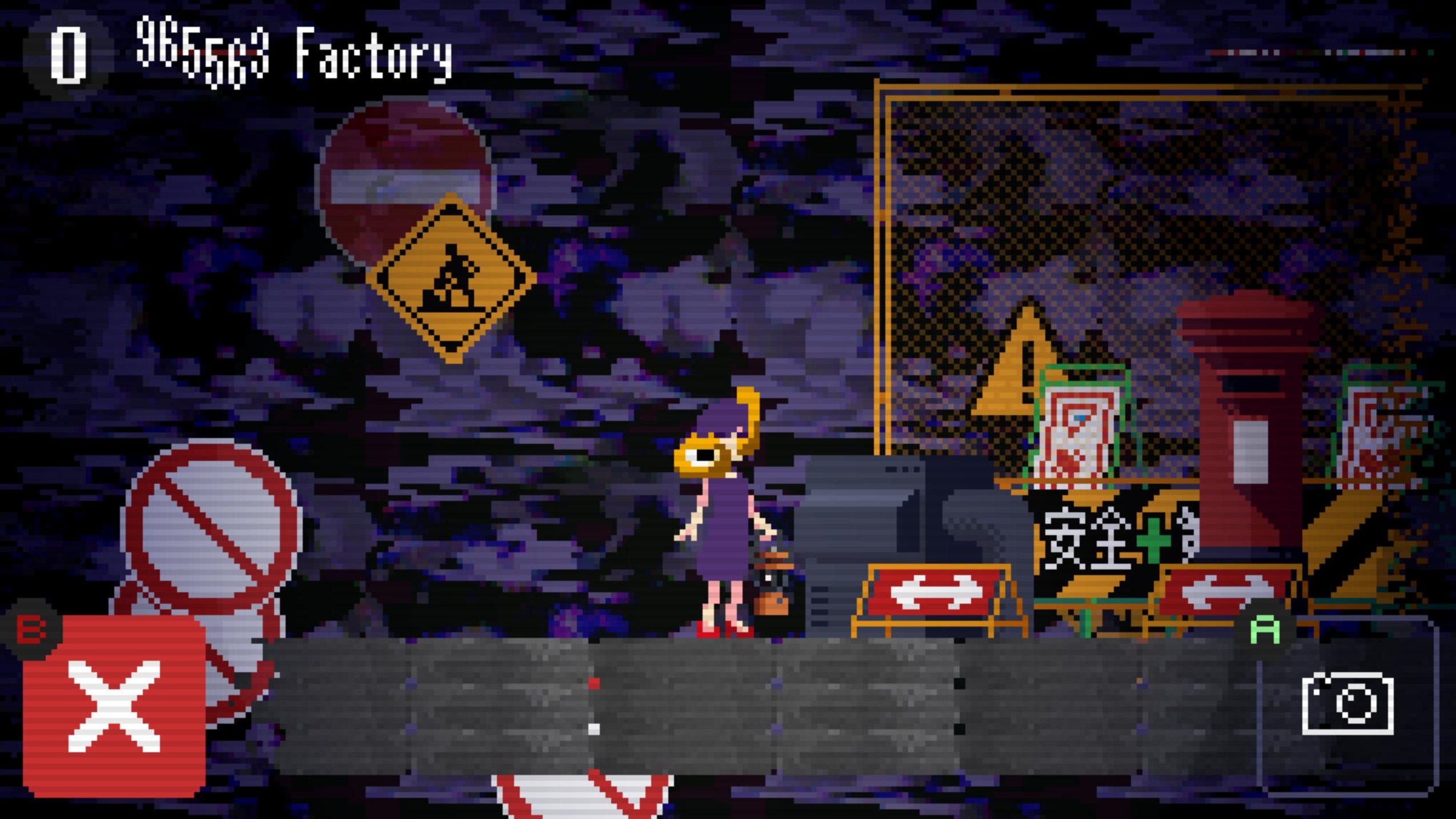 Obviously six digit numbers made from a pool of 11 (the phone's # and * are included) means there are... 332,640 permutations. There aren't 332,640 in here. Sort of. There are, in fact, comparatively a very few archetypes, upon which minor variations exist. So you'll see the world with the roadworks appearing for thousands of different numbers, but perhaps arranged ever-so-slightly differently. Or objects sometimes included in one instance aren't in another. Which is to say, it's not as daunting a concept as it might first appear, but it's also an enormously confusing one.

At the start you're given a first number to dial. Head there and you'll be given a second. And from then on out it's really up to you to experiment. One object found early on allows you to see a glimpse of the dialed world before you head there, in the form of crude symbols of the items that will be there, and a "?" for any you've yet to look at. This allows, at first, a more methodical approach to exploration. Sure, I'm still clicking on random numbers, but I'm at least aware where I might be heading. 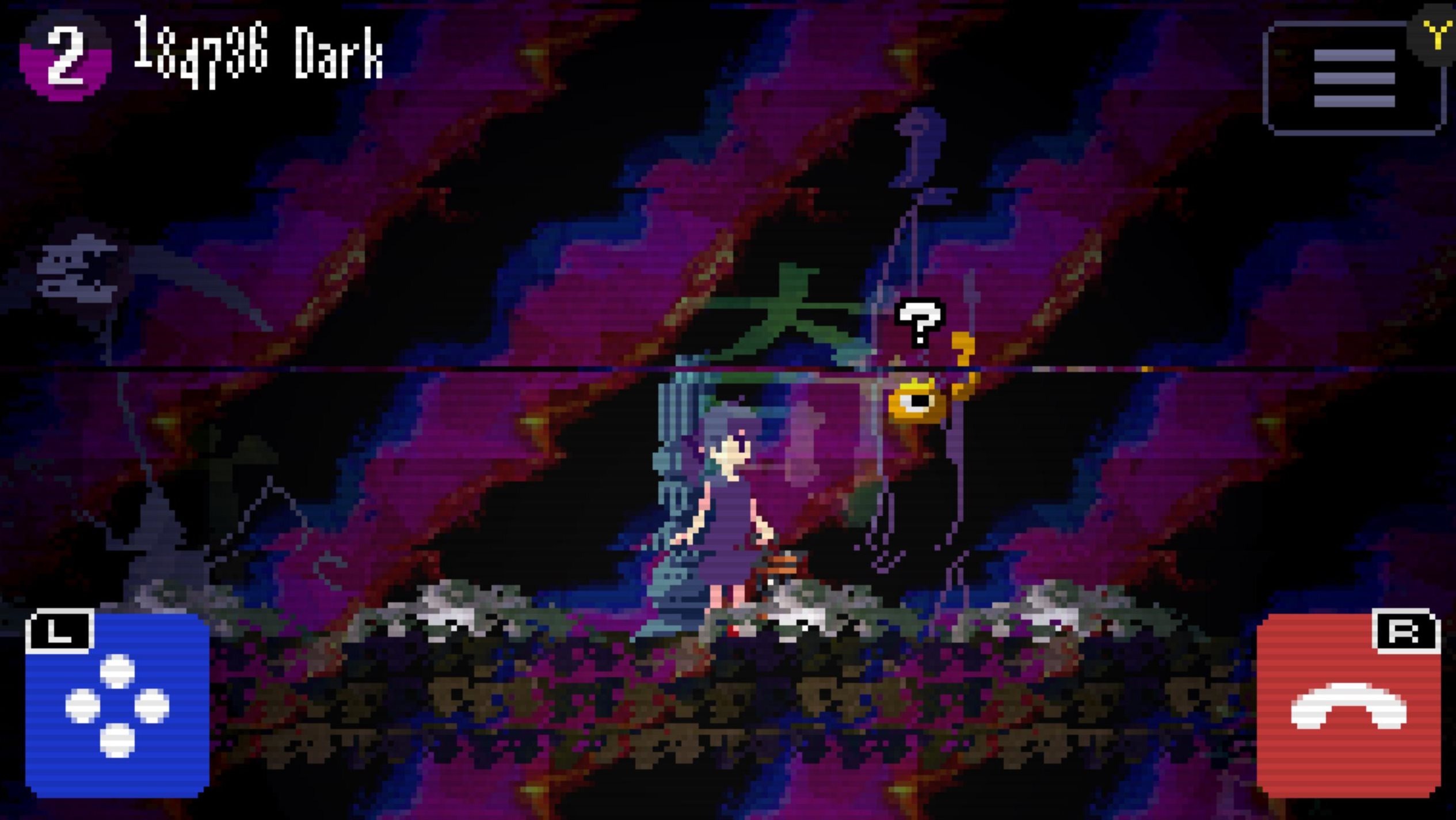 This feels like it works, for a while. And then it really feels like it doesn't. I reached a point where I'd run out of things to do, and was despairing at what doesn't work. I solved strings of puzzles that culminated in deliberate dead-ends, which is demoralising and dull. Creating a lollipop for a sentient bin to lick (yeah, it's that sort of game) took quite some doing, involving finding a pot, reviving some sugar creature, and using a fire. Just figuring out that it's a thing to do is quite the feat, and the result was some dull animation and nothing else. Huh. These are, it seems to think, "alternative endings". They are not. They are red herrings that waste your time.

Also, there's that which should work but does not. In one of the lands I found a space rocket, and looking at it I'm told it needs more fuel. I also found a canister of "all purpose fuel". They cannot be used together. That's dreadful design. It needs to be written in, to be explained, not just give you the generic "this does not work" message as if you were a fool for trying. 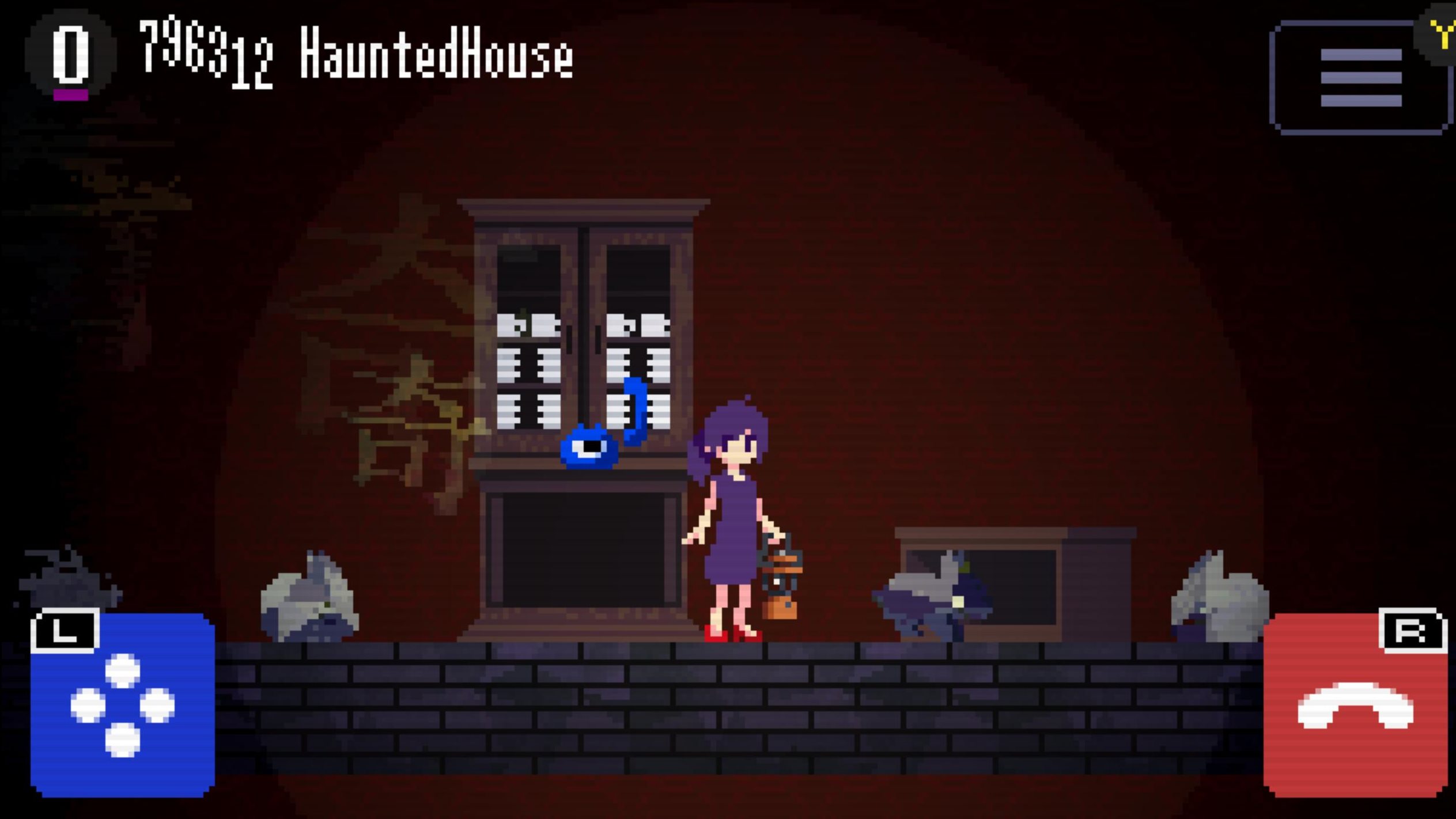 The game's literature encourages players to share phone numbers with one another, to aid progress. Which is a great idea, were anyone else to do so. I've searched around - I can't find anyone talking about it, despite this having been an iOS/Android game for some time. (Just those shithead fake pages on scumbag gaming sites that pretend to have walkthroughs on Google, but link to empty pages.) Even the Steam discussions are mostly silent. And it's obviously not a great candidate for YouTube, as you approach it in your own random order.

In the end it dissolves into stumbling upon things, with no clear causal links in either direction. I managed to make the moon rise, by some entirely unconnected act, which caused something else equally unconnected to happen. And I was straight back to random numbers and randomly using items on everything. Meanwhile, I knew that I need something to fix a bulb, but I was also aware it could be anything, and I'd not found it yet somewhere in its hundreds of thousands of worlds. And maybe five or six other equally opaque and baffling half-ideas. I think, were I not reviewing, it would be here I'd have quit and been done with it. 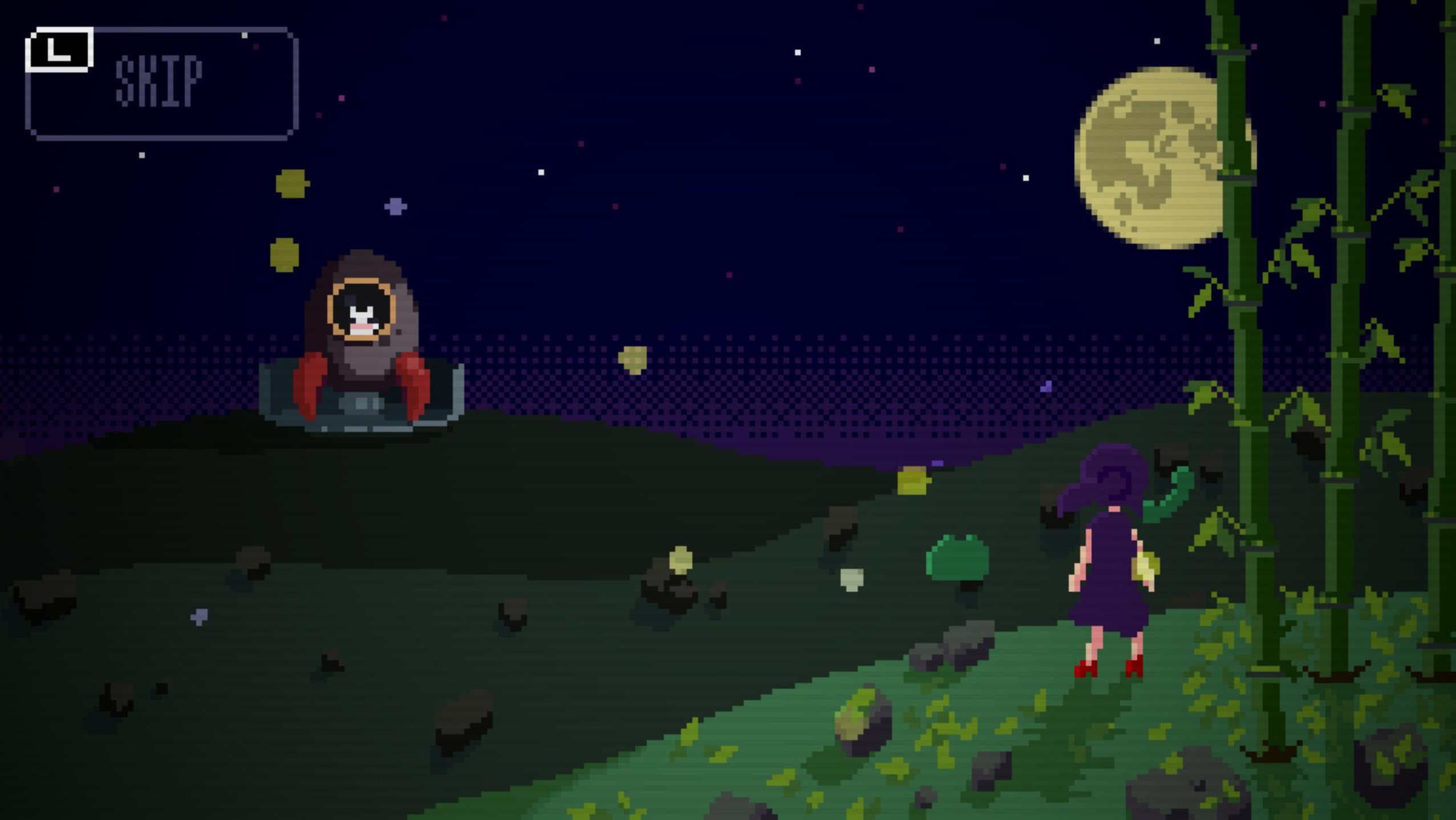 But I am, so I persisted, and the solution to that bulb puzzle is rubbish. Hell, I'll spoil it to save you the same. You have to burn some bamboo to create a "bamboo filament". Now, yes, Edison theorised bamboo charcoal could be used in one of his light bulb designs. But did you know that already? No you did not. Would you have thought, "Ah ha! I have bamboo! Now I can fix that bulb!" No you would not. You would have stumbled on it by accident like I did. And not been impressed.

It's equally frustrating that vital information for progression is hidden in the game's "library", a mass of icons of all the discovered flora, fauna and objects, that contains short descriptions that feature sentences that don't appear in the game proper. So it's only here that you'll learn one particular character is fond of needlework, despite that not being mentioned when you meet her, nor indeed indicated in any other meaningful way. So you have to constantly re-visit and guess at which icons you've not looked at before, and read through the dirge to find such random gibberish. 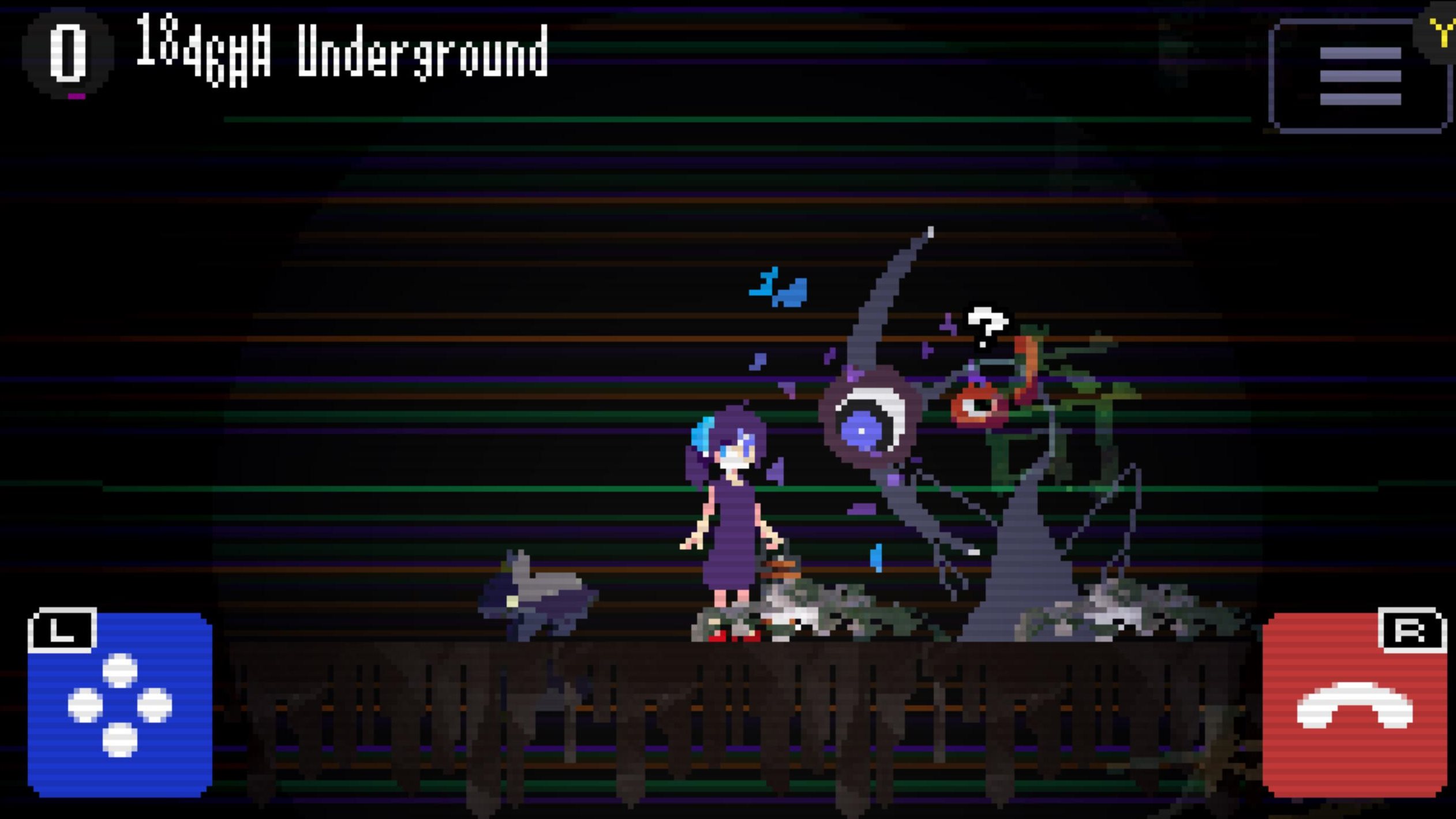 Pretty much all the complaints above are incredibly familiar to anyone who played point-and-click adventures outside of the LucasArts bubble. Badly designed puzzle chains, failures to recognise reasonable solutions to given problems, and most of all, the lack of any sense of flow. Complete a puzzle, then instead of having a door open for the next, you're back to aimlessly wandering, wondering what random thing might have changed. Or worst, here, find that all those puzzles were about finding one of the game's "endings", and have got you nowhere toward the stated goal after all.

It's also worth quickly noting that this comes with no graphics options at all, and even how to switch it from a tiny window to fullscreen isn't mentioned anywhere. (F11, as it happens.) Plus its mobile origins feel very apparent in the clunky control scheme, obviously far better suited to fingers than a mouse.

That this is a trippy experience doesn't excuse it, sadly. I love the presentation, I love the conceit, but ultimately this is just a cleverly disguised badly designed point-and-click adventure. Hell, this is a game where you get moon rock by looking at the moon through binoculars. Come on.

I finished it in the end. It didn't feel like an achievement at all. I clicked random items on random things and eventually it stopped. Which is such a shame for such lovely art, sound and conceit. Pah.