After reviewing the pleasing puzzler Globesweeper, I was recommended a whole other pile of recent puzzle games I've missed. I'm working my way through them, and the first to report back on is 2017's Tametsi. A game that takes its lead from the best PC puzzle game of all, Hexcells, and then combines it with the core Minesweeper mechanic. Which is to say, bespoke, intricately created puzzles, for which guessing is never necessary, but thinking certainly is.

If Tametsi is guilty of anything, it's of not brilliantly explaining itself from the start. It has quite the muddle of puzzle types, but doesn't quite manage Hexcells' masterful introduction of new rules (over the course of all three of its games) in such a way that they always feel natural. However, once you're in, you're really in. And it's a real pleasure to see ideas so sensibly borrowed being so impressively adapted and tweaked. 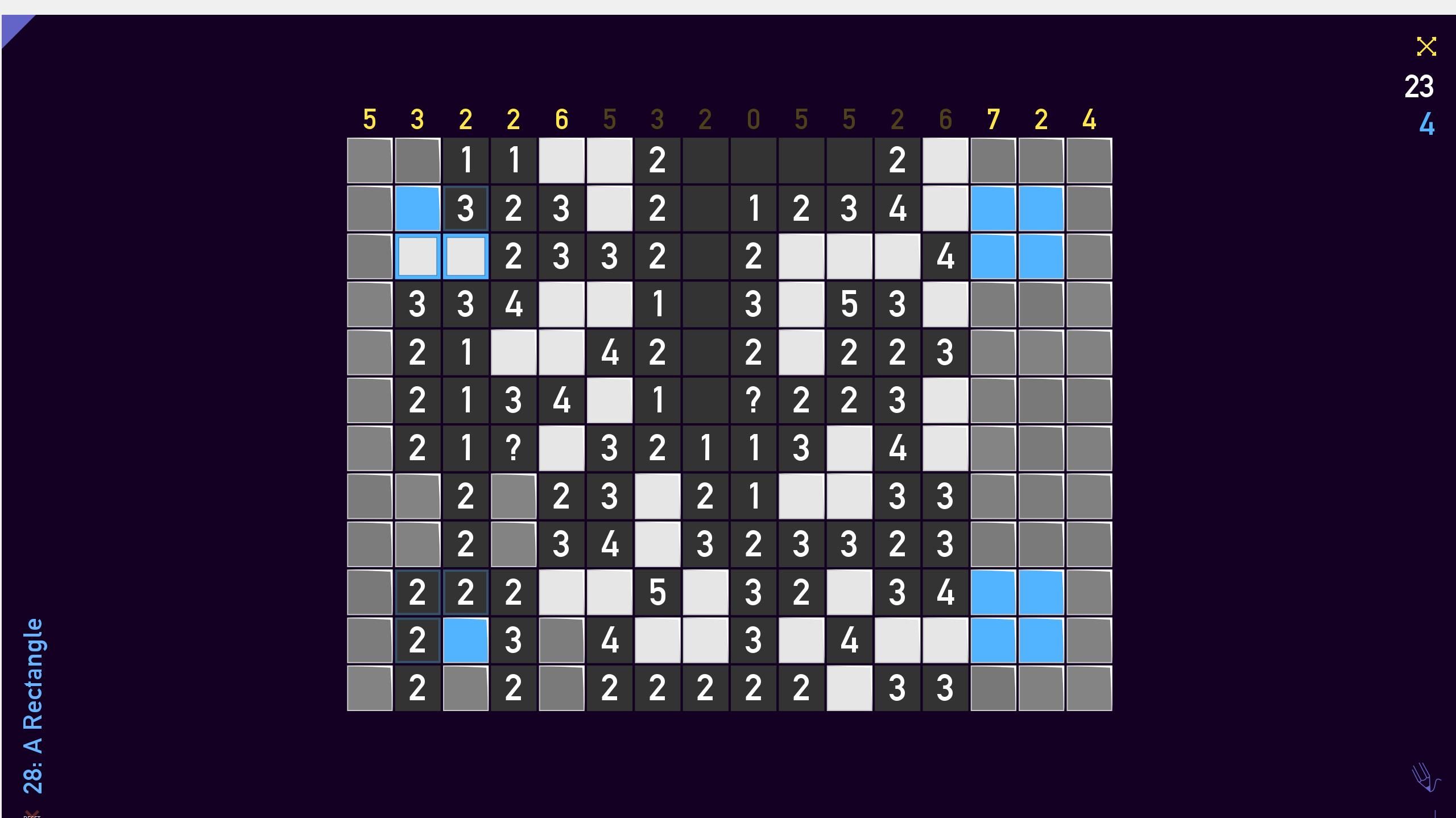 A puzzle starts with a grid of mostly blank tiles, and a few with numbers, indicating how many of those surrounding are to be marked as bombs. That eliminates other cells, which when clicked on reveal more numbers - Minesweeper style. But there's a host of other information to include in your deductions, two of which are straight from Hexcells. There are sometimes numbers outside of the grid of cells, which indicate how many are in that row or column, and there are total bomb counts known from the start, which often give you the vital piece of knowledge to be able to succeed.

But Tametsi takes this all further, through a combination of both shapes and colours. Most of the 160 (!!!) puzzles here are multicoloured, and you're also informed how many bombs are to be marked on each of these. So at the start you might know there are 30 bombs to mark, six of them purple, three green, and twelve red (the rest being the default grey). So knowing at a certain point that there are only two purples left, and that certain clues tell you in which groups they must be, you can remove any others remaining. Adding in this extra layer of information allows puzzles yet more ways to disguise how they're hiding their next possible move, making it a lot of fun to juggle the elements. 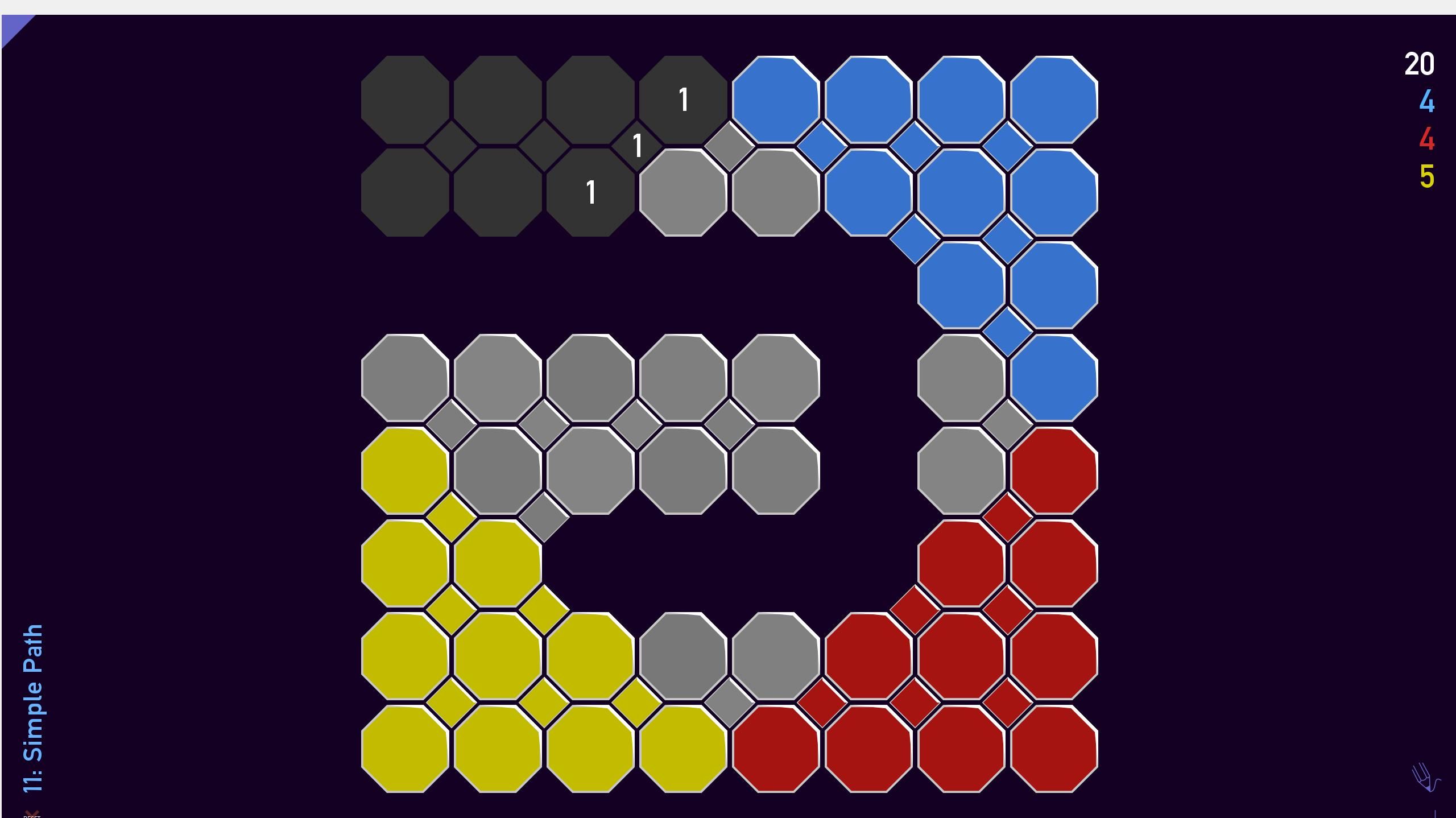 Shape-wise, it's all over. Some puzzles are squared grids, others are hexagons, but then there are some made of octagons and squares, others made of differently sized squares, and a couple from triangles. This certainly keeps me on my tippitoes, because each time I have to adjust what I'm looking for, noticing the overlaps, the edge-to-edge matches, and re-aligning my brain.

The only time where I think this actually becomes a little too much of a trip-up is when it comes to square puzzles, where some require you to look for matches across corners (so considering each square tile to be surrounded by eight others) and others just those touching their sides (so with only four neighbours). The difference is communicated only through a very tiny little logo in the top right of the screen, far too easy to miss. It would have been far better if it could have been communicated visually by the puzzle itself, perhaps rounded corners when they don't apply? Something like that.

My other thought is that it really needs a system for fainting out a number when it has the correct number of bombs marked - that would make the puzzles a lot cleaner to solve.

I'm 32 puzzles in, and that's taken me a good long while. That there are 68 more of these to go, plus another 60 that have been released since the game's initial release, makes me a very happy little man.

These are top notch. No, they don't quite match Hexcells for its sublime elegance, but then comparing a puzzle game to Hexcells is like demanding that every film match Citizen Kane, and that's not helpful. But if that's an itch you need scratching, this will definitely do the trick. Very splendidly. AND IT COSTS TWO POUNDS! £2! Good gravy, that's good. 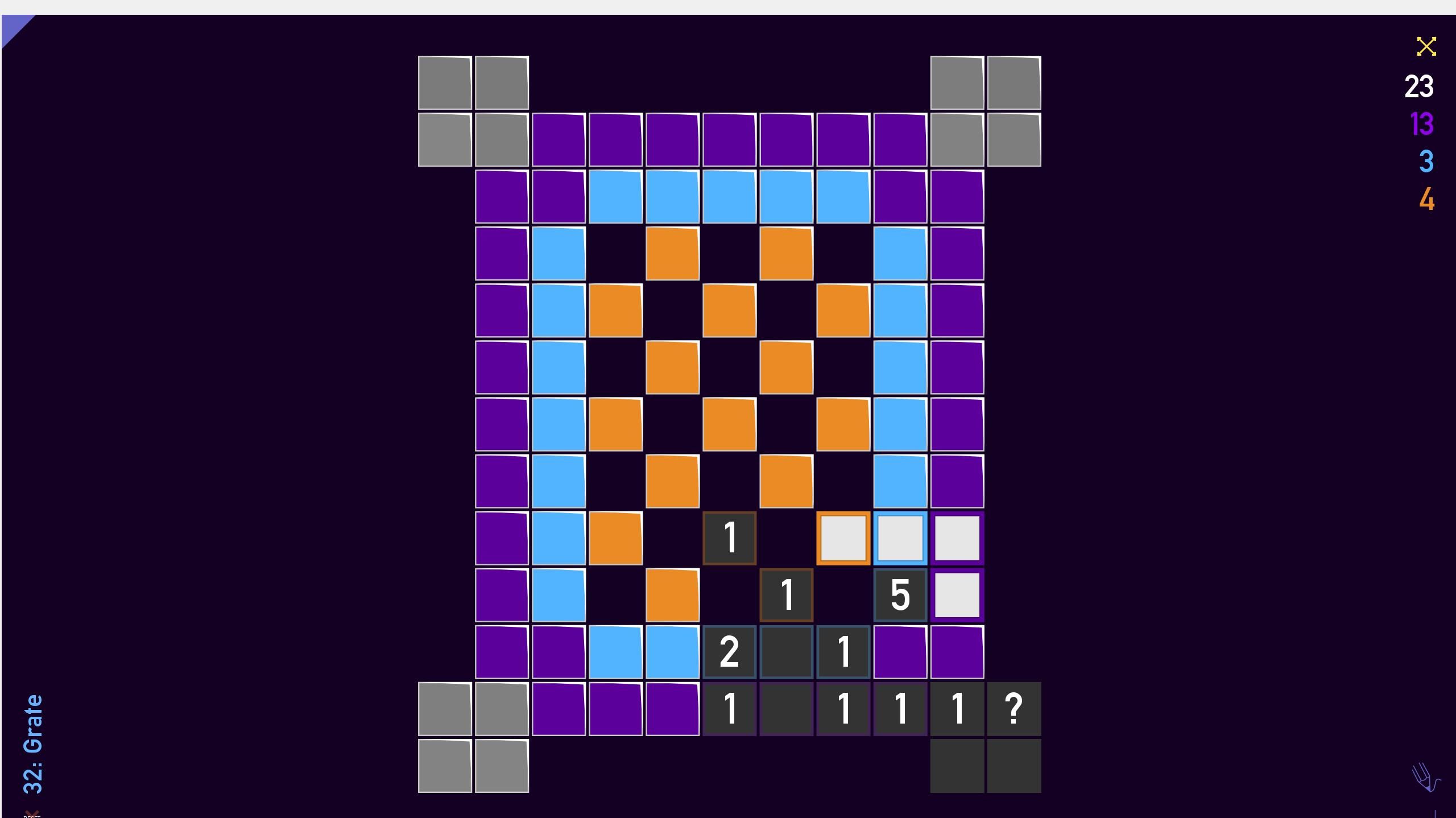 PS. Something else worth noting is the work of "inn0centive", a German chap called Tom who makes the most utterly splendid walkthrough videos for all these sorts of puzzle games. All of Tametsi is here, and check out his channel for any other puzzle game you might be stuck on. I only say all this because he's been unknowingly helping me out for years, and he deserves credit.