This week's Premature Evaluation sees our early access conscript, Fraser, flung into the nightmarish Eastern Front of World War I in multiplayer FPS Tannenberg. It's a companion game to Verdun, but the weather is worse and and there are a lot more angry men with guns.

A man sprints out of the woods just in front of my hiding spot, screaming as he jumps over fallen trees. Before I can even figure out if he's friend or foe, there’s a flash and a scream as he's sent hurtling through the air, the latest victim of the enemy’s mortar. He lands in the mud right next to me, where he moans and gurgles as the life slowly seeps out of him. It’s a noise I’ve become very familiar with in Tannenberg.

Named after the 1914 battle that saw Russian and German forces fight over East Prussia, Tannenberg is the second game in the World War 1 multiplayer FPS series that began with Verdun. Like Verdun, it revels in historical details, from guns and uniforms to incidental props, but the jump to the miserable Eastern Front changes the focus of the battles from plodding fights over trenches to 64-player conflicts spread out across multiple war-torn sectors on rather chunky maps. 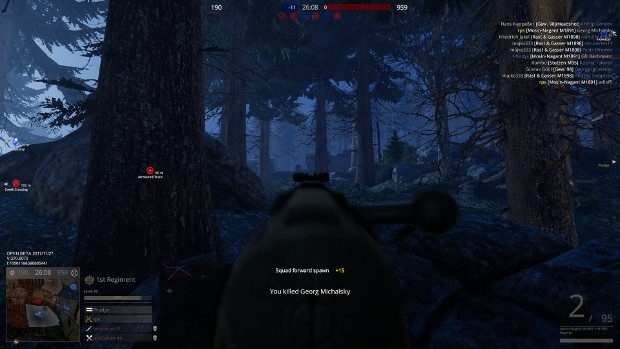 The ‘Maneuver’ mode is the headline attraction here - it’s where you’ll find the huge and messy 64-player brawls. I recklessly dived into one straight away and quickly found myself shot dead. Perhaps it was silly of me to expect anything less from a game that draws its name from a battle that killed and wounded around 200,000 soldiers across both sides, but mostly Russian.

Inauspicious start aside, Tannenberg is a little easier to get to grips with than the often painfully slow, structured trench warfare of Verdun. It’s more familiar. Each of the expansive maps is split into sectors that must be captured, so everyone gets to decide, at an individual and squad level, if they want to be an attacker or a defender. In Verdun, the roles were fixed, with one side attacking and the other defending. 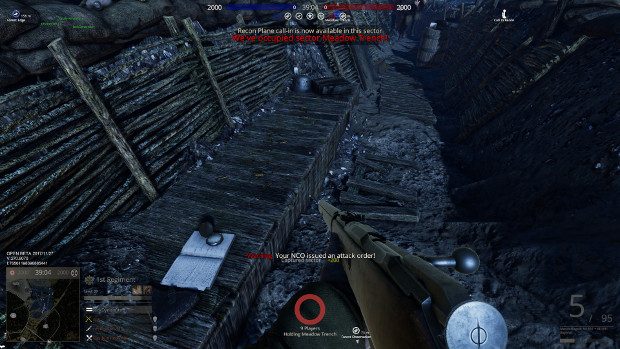 The change in direction makes Tannenberg feel a little closer to its mainstream counterparts, particularly Battlefield 1, though it maintains that more considered, tactical approach from its predecessor. Sector objectives aren’t simply these arbitrary areas that you’re told are important but actually don’t do much apart from denying the enemy territory and reinforcements; each has an important objective that offers tangible benefits.

Artillery positions are, not surprisingly, some of the most hotly contested areas. An artillery strike can quite easy decimate an entire defending or attacking force unfortunate enough not to be able to find cover - they can be proper game changers. A lot of my time with Tannenberg, then, has been spent on my belly, slowly crawling towards giant, thundering guns. It can’t compete with Battlefield 1’s fidelity or striking cinematic aesthetic, and its explosions and artillery strikes, while effective, don’t exactly reflect their devastating power visually, but it’s still got this oppressive atmosphere, this sense of impending apocalypse, so that even slowly crawling through the dirt can still be oddly exhilarating. 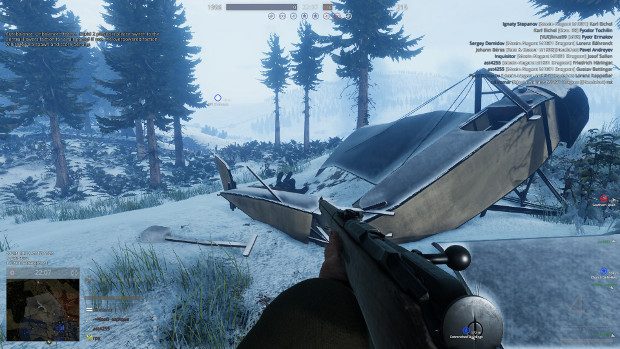 Other sectors contain less destructive but equally important tools like air recon. Calling in a plane from a fixed radio provides intel on the sector selected, revealing the enemy’s position and updating your team’s mini-map. In a game where the murky woods could be hiding a whole squad, this becomes an exceptionally useful ability. It’s possible to escape a plane’s gaze, however, and everyone in the vicinity is warned that a plane is coming. It’s a bi-plane, not an all-seeing drone.

With commanding officers setting attack orders and objectives all over the map, there’s never a moment’s respite from the war, and it’s rare for a minute to go by without some sort of conflict. Despite being on the other end of the FPS spectrum from Call of Duty, the pace and moment-to-moment action actually feels more like Activision’s shooter than its arguably closer relatives. There are no long jogs ending in a quick death here. 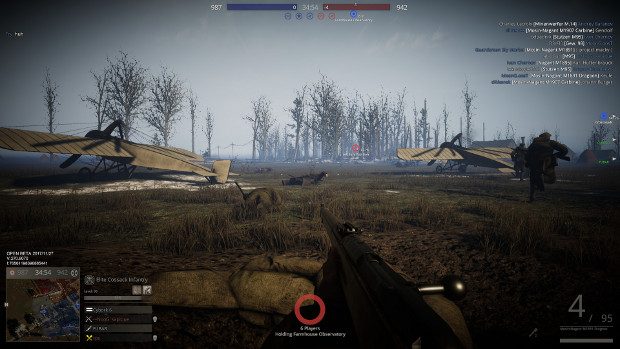 There are four armies, four roles in each of them, and then each role contains three different loadouts. Each army and class also comes with a series of abilities that define them. The Cossack Kazak, a rifleman, is trained in horseback riding, for instance. Picking an army and role, then, should be a bit tricky. A lot of the choices, however, are either illusory or just plain dull. Let’s go back to that exciting horseback riding ability, which lamentably does not live up to its name. The effect of this ability is 33 percent less gun sway while moving and 10 percent faster reload speed. A gun sways a little when using iron sights because of its weight, and yes, that’s a welcome dash of realism, but I cannot even begin to care about this percentage. And 10 percent faster reload speed? What's that? Less than a second? Outside of the most competitive level of play, I can't see why it would matter. It’s hard to not feel a bit tricked. Where’s my flipping pony?

Most of the other abilities come down to barely noticeable stat changes, too. And within armies the loadouts tend to just be a few primary and secondary weapons mixed into slightly different combinations. Aside from the occasions where I got to put on my squad commander cap, I didn’t feel compelled to play differently. The large gap in the progression tree implies, at least, that there will be considerably more abilities introduced over early access, but I’m a wee bit worried that they’ll just be more of these unadventurous stat tweaks. 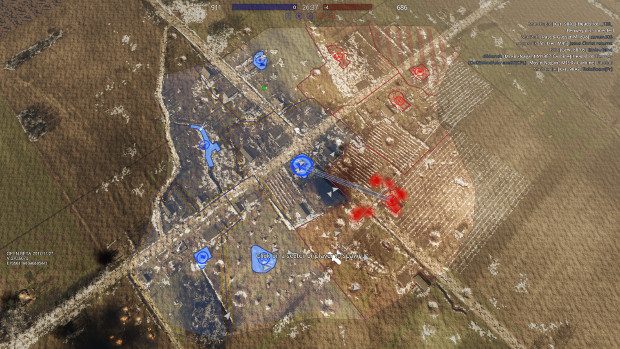 Battles are still thrilling, hectic affairs where the front line is always changing, and I’m so relieved to be out of the claustrophobic trenches of Verdun. A lot of the things people liked about Verdun remain in Tannenberg, though. There are still some trenches that you’ll need to defend, in case you can’t live without them, and there are plenty of opportunities for you to make brave charges, dodging explosions and gunfire as you try to drive the enemy out of their hiding spots. It’s just that there’s a lot more to do on top of that.

The guns feel just right, too. Deadly accurate at close range, but with realistic bullet drop that ensures matches don’t devolve into exhausting sniper battles. There aren’t any scopes in the game at the moment, and it’s all the better for it. Long-range battles are still possible, but the chances of being taken out by an opponent you wouldn’t have a hope of spotting are extremely low. Despite my issues with loadout diversity, the guns all come with vastly different effective ranges, reload styles and weights. The lack of submachine guns is another boon -- there’s no spray and pray on the Eastern Front. This also makes machine gun emplacements all the more terrifying. Watching one mow down a squad, countless bullets bouncing off the ground and thudding into flesh and bone... a gun that might be considered mundane in another shooter is utterly devastating in Tannenberg. 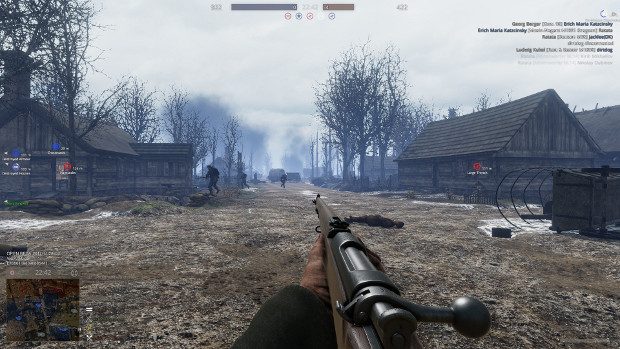 I spent my last few games eschewing the objectives (sorry, team) so I could instead do a spot of wartime photography. There are houses crammed with the detritus of the people who fled or died, corpses of animals and vehicles left in the mud or buried under snow, and tiny snapshots of soldiers’ lives, like unfinished cups of tea or open diaries left on a bench. They’re sad, haunted places. While war shooters typically deal in bombast and screaming and artillery barrages, Tannenberg juxtaposes that with quiet, everyday tragedies.

An eye for detail and an obsession with authenticity, if not complete accuracy, is possibly even more important in Tannenberg than it was in Verdun. Despite the long pauses and more restrictive format, Verdun’s trench warfare hook set it apart from other military shooters and placed it firmly in World War I. Tannenberg is a bit more like the competition; a bit more conventional. It’s already a better game, certainly a more exciting one, but it’s not got as unique an appeal.