Tecware might not be the first name you think of when it comes the bestest best gaming keyboards money can buy, but their mid-range Phantom RGB sure is a heck of a lot cheaper than a lot of its competition - just £46 / $46 for the 87-key tenkeyless version I've got on test here today (it's also available as a full-size model in the US for $50), which is really quite tempting considering a lot of the best keyboards will set you back at least double that.

Surely, there must be some sort of compromise, right? Well, I've been using the Phantom RGB for several weeks now, and it's arguably one of the more pleasing keyboards I've tested for quite some time. Here's wot I think.

As mentioned above, I've been sent the tenkeyless version of the Phantom RGB, so it's naturally a lot smaller than your typical mechanical keyboard due to the lack of number pad. However, even the full-sized model is pretty compact, measuring just 133mm from top to bottom. That's 8mm shorter than the Fnatic Streak, which is already one of the slimmer mechanical keyboards you can buy today. It does mean, of course, that you won't find any dedicated media or macro keys on the Phantom RGB, or anything fancy like a volume knob or USB passthrough. If you want any of those, you'll have to look elsewhere.

Still, if all you're after is a small, relatively inconspicuous mechanical keyboard, the Phantom RGB will probably tick a lot of boxes. Personally, I actually prefer the overall look of the Streak - I'm a sucker for rounded corners - but I do like how plain and simple the Phantom RGB is compared to your typical gaming keyboard. It's quite industrial looking, with its dark grey chassis, hard edges and angled corners, but it also has sensible fonts and is completely free of obnoxious logos and go-faster gaming stripes. The old Internet Explorer shortcut mapped to F2 is a tad dated, all told, but the rest of it is pretty easy on the eye.

The Phantom RGB also feels great under the fingers, too. Tecware have used Outemu mechanical switches here rather than Cherry's more widely used MX switches, but in terms of overall feel I'd say the Outemu Red switches on my particular review sample (it's also available in Blue and Brown flavours) were pretty similar to your average Cherry MX Red switch.

Red switches, in case you're unfamiliar with them, generally have a straight, clean up and down motion when you press them. This means they're often the fastest type of switch, which the general keyboard hivemind will often profess is good for gaming, but they also offer slightly less tactile feedback as a result - especially compared to more tactile types of switch, such as the super loud and clicky blue types or slightly quieter, bumpy brown types, which tend to be better for hammering out lots of word documents and the like. 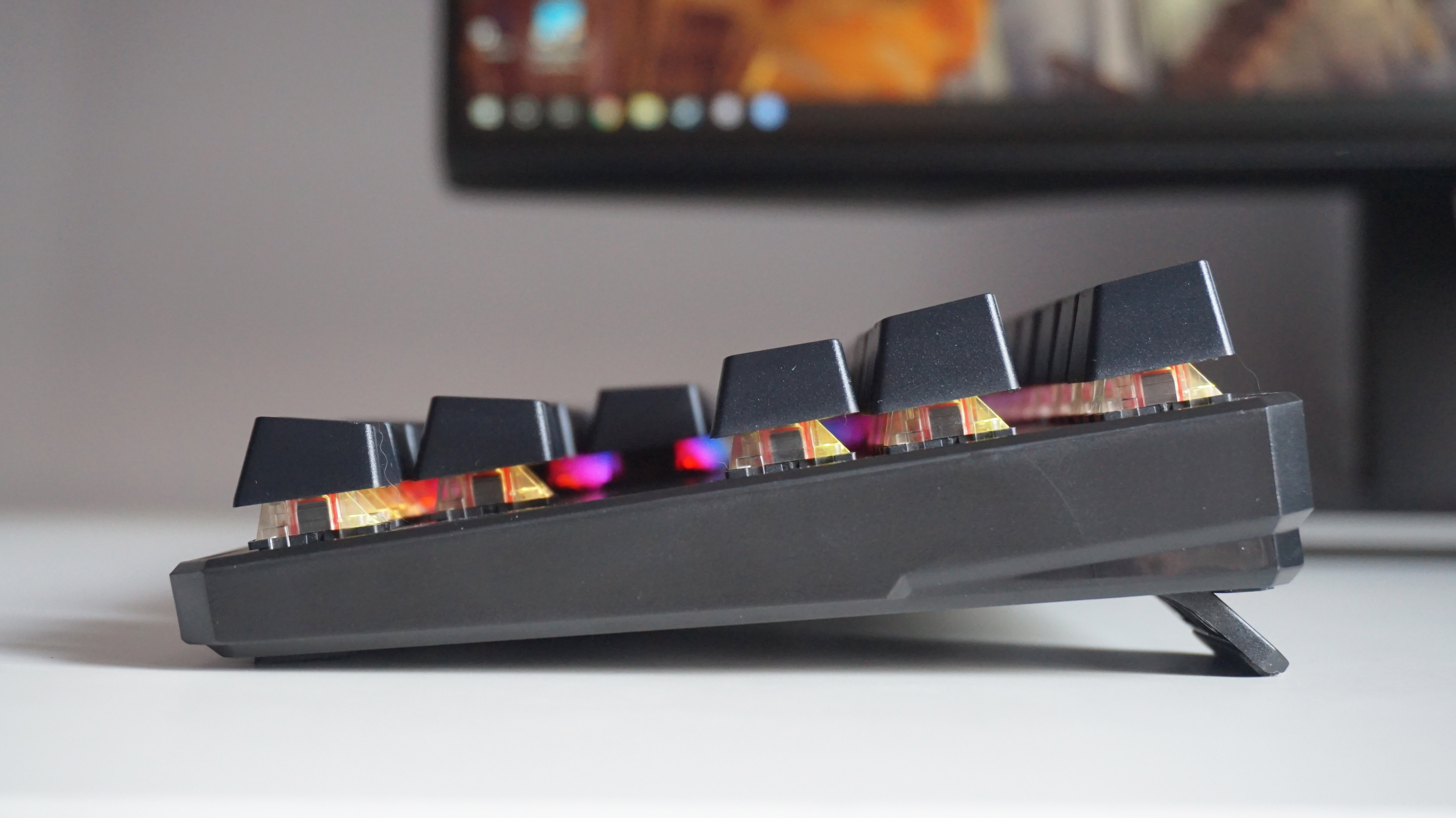 Personally, I've always got on very well with red switches when it comes to general typing, and the Phantom RGB is no exception. I was able to type at full speed practically straight off the bat, and everything felt well-spaced and perfectly proportioned despite the keyboard's somewhat diminutive frame.

Even its US layout didn't cause me any problems, which tends to be my undoing (*cough*Steelseries Apex M750*cough*) when I'm so used to UK keyboards. It also wasn't too noisy, although I reckon its CLACKEY CLACKS are probably still a little too anti-social for sticking down in a living room, for example, unless you have particularly tolerant housemates or family members.

The only thing I'm mildly concerned about is the overall build quality of the WASD keys. I wouldn't say I've been bashing those keys particularly hard when playing games, but after a couple of months use I started to notice the D key becoming noticeably bumpier than the rest of them, as if the key cap had come a bit loose. Fortunately, it was pretty easy to fix, as the Phantom RGB comes a both keycap puller and switch remover in the box, plus four replacement switches, which is a real rarity at this price. As a result, I was able to pop off the key cap to check it was all right and then instantly reattach it without any problem. Once I'd done that, it was fine and dandy again. 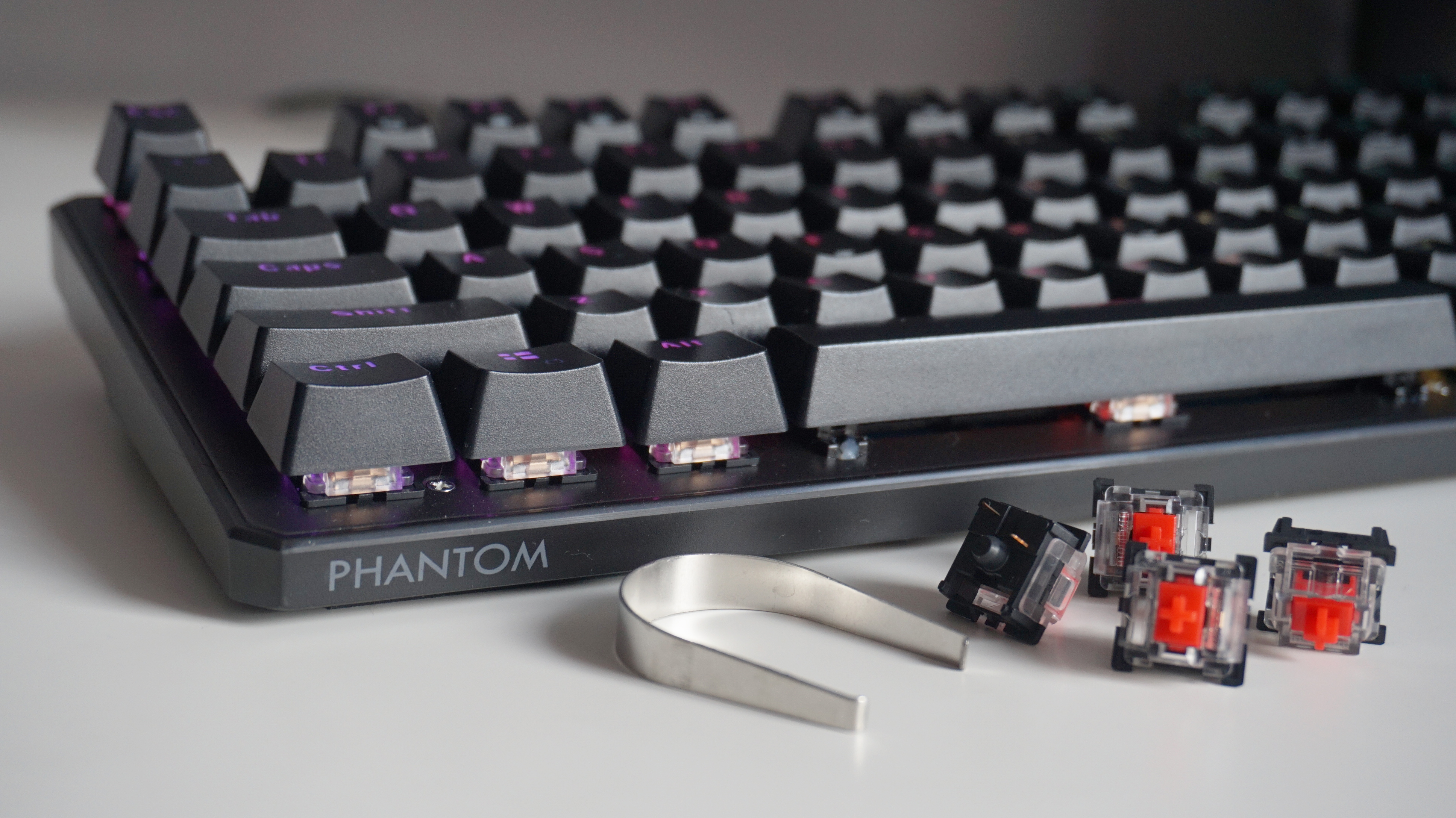 That's not to say this sort of thing won't happen again in the future, of course, and I'll admit I was disappointed that I was having to fiddle about with the key caps so quickly after I'd started using it. You could say you get what you pay for, in that sense, but at least Tecware give you all the tools you need to fix any potential faults right off the bat instead of making you pay extra for them.

Still, apart from that, there's a lot to like about the Phantom RGB. While that lingering concern over its build quality means it doesn't quite make it into my best gaming keyboard list, I reckon its low price of £46 / $46 probably still makes it a decent buy if you're thinking of getting your first mechanical keyboard but aren't sure whether you're actually going to like them or not. It's certainly better than spending upwards of £100 / $100 on something like the Fnatic Streak / miniStreak only to find you hate how they feel or the amount of noise they make, so if you're looking to dip your toes into the world of mechanical keyboards without breaking the bank, then the Tecware Phantom RGB is probably one of the cheapest ways to do it.