I wasn't scheduled to work during the EA Play Live stream, but I did anyway, because that meant I was in with a hot chance of seeing something Dragon Age related. Let me introduce myself: hello, I am a fool.

I do this whenever EA do any sort of live anything, and was rewarded with a still image with some moody voice over at E3 two years ago. My hope was that because the only real word since then had been worrisome stories about development hell, they'd show... something. As it happens they did show something! It was almost nothing, but I'll take it! I honestly believe that almost all Dragon Age fans would rather a near infinite time was spent on development than any employees have suffer, including myself, and honestly what we saw last night proves that, because clearly they could release a trailer one frame at a time over literal years and we would still all freak out and spend ages sharing fan theories on Tumblr.

What it was, right, is that right at the end of the show, there was a reel of next gen projects that they're not ready to properly talk about but that are being worked on. Criterion the shiny car people are making shiny cars, that sort of thing. And one of these was that BioWare are making amazing worlds to do stories in, accompanied by images of obvious Dragon Age 4 set dressing (even though the words Dragon, Age or Four were not spoken.) Apparently this tease was as much of a surprise to BioWare employees as it was to us.

What we saw were three landscapes: a big sad tree, some kind of ruined building, and a lot of red lyrium. The sad tree was sad because its roots were infected, the ruined building was ruined because it had lyrium growing all over it, and in the final frame a big tumorous growth of lyrium was beating like a heart. 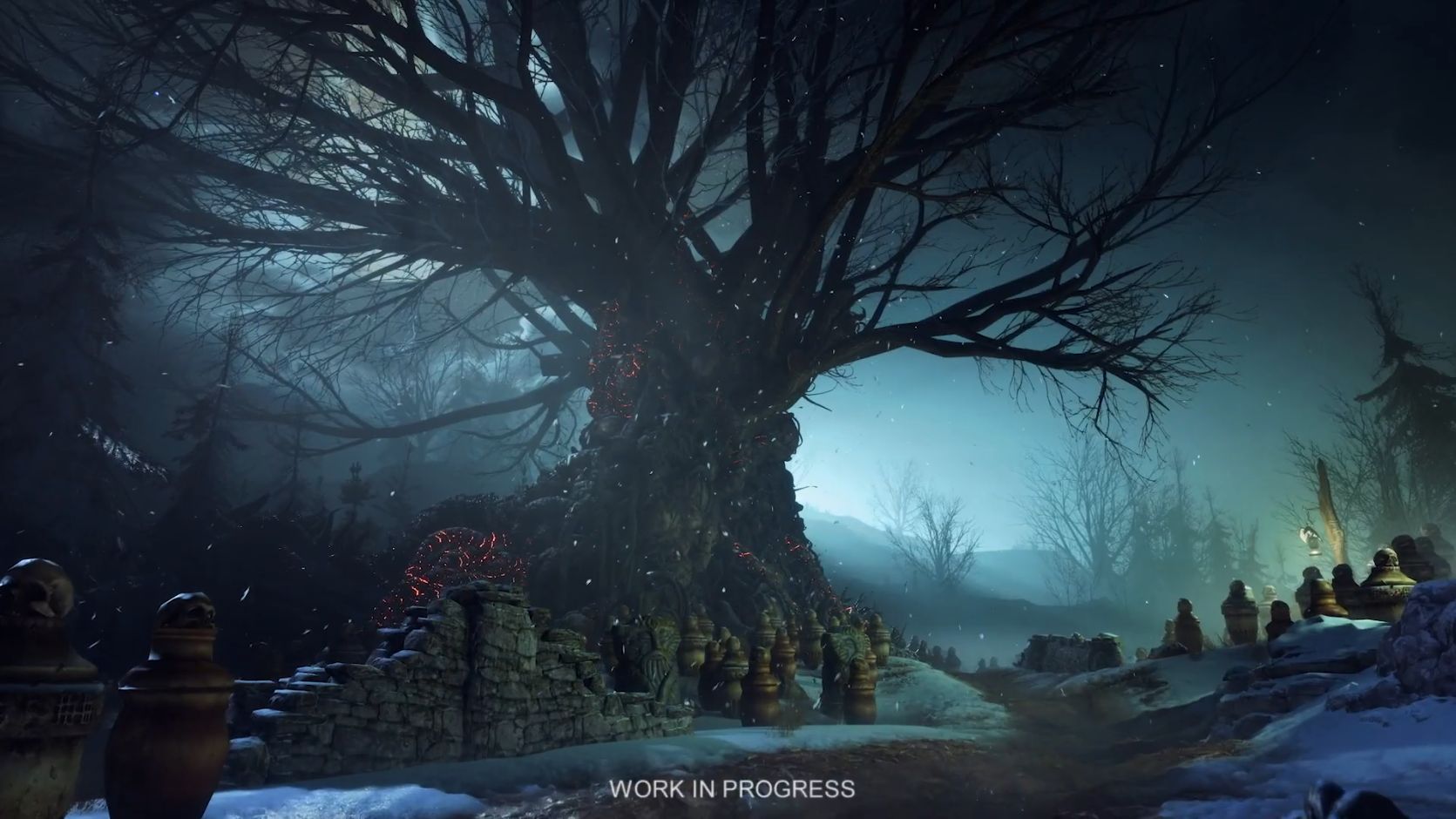 Obviously this immediately set off a lore riot, and I spent some time browsing various fan groups to see what the consensus was. A lot of people have pointed out that the red lyrium now looks more like deep mushrooms than the big chonks of crystal that it looked like before, but that doesn't mean it's some kind of fake out or that it isn't red lyrium. Personally I think it's just a change in design to make it look more organic, after The Descent DLC confirmed that lyrium is an organic, living substance and not just a mineral. Actually it's sort of both. Look, I don't have time to catch you up if you're not a fan, just go away and play the three games and read a bunch of Wikis and then come back here, okay?

While we're still thinking about The Descent, it seems pretty obvious that the big Smoking Kills fag packet warning in the final shot is a corrupted titan heart, and that we will have to fight big angry rock monsters. Even though this is all clearly work-in-progress set dressing, what I'm inferring is that Solas, a whiny genocidal elf whom I love (and whom is known to the fandom as the Egg because he is bald, (the kind of naming convention that saw my friend Beard get the name Beard because one time he had a beard) isn't necessarily going to be the big bad of DA4. 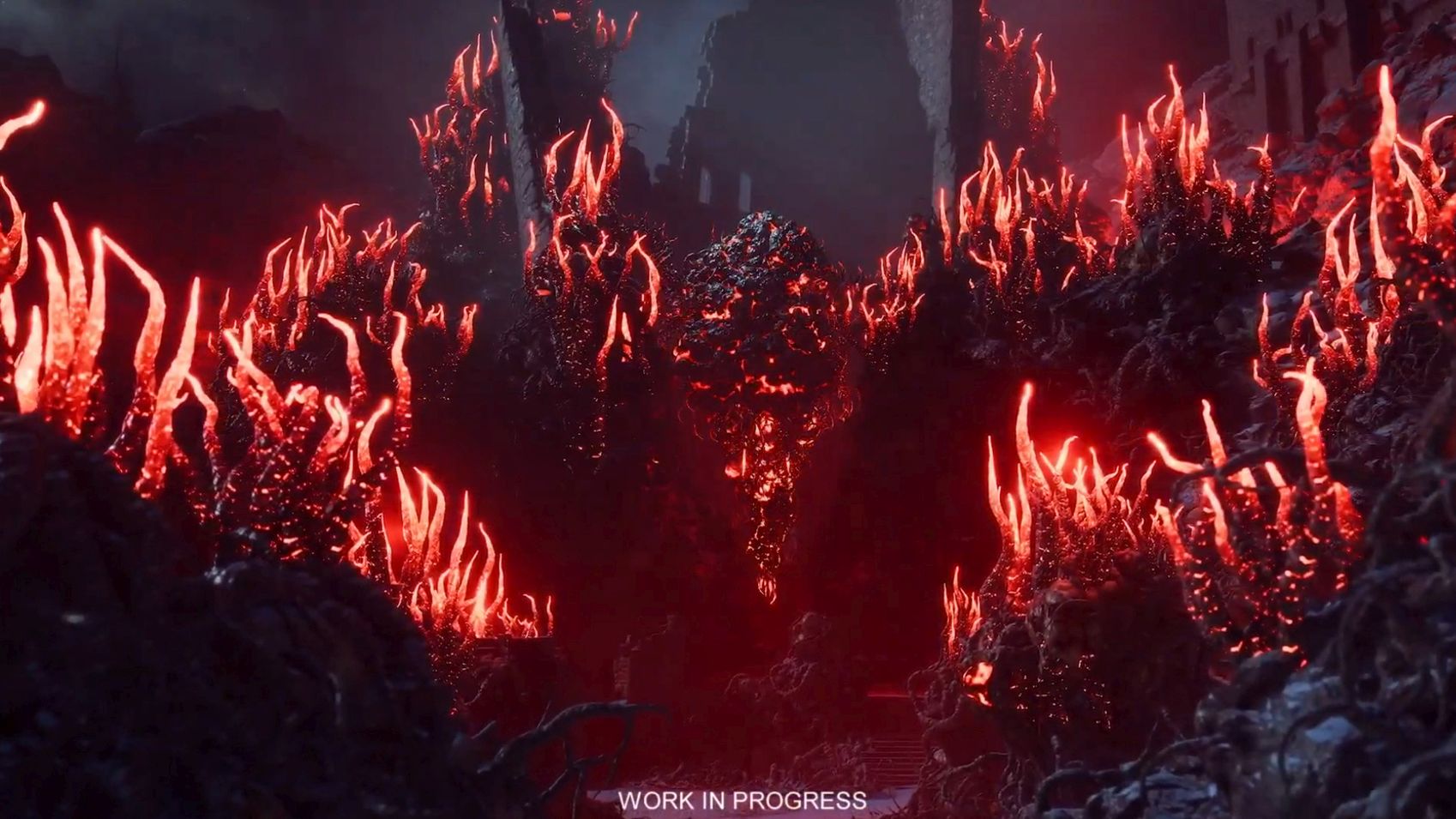 Lyrium seems to be the life blood of everything. It comes from deep underground. There are implications that, like, the dwarfs were just created from it and/or Titans, like how Victorians thought flies spontaneously generated when they weren't looking. If the sources of lyrium got corrupted and became red lyrium, that would really fuck shit up. Never mind Solas's weird plan to kill everyone and start over so the elves can be magic again.

All I'm saying is that if we look at the natural thematic progression of the games in the series - a standard external army of baddies in DA:O, a more complex baddie created by ourselves over time in DA2, and a combination of both in DA:I - I'm going to say that in DA4 the baddie will be literally everything.

But you know what else is good? I've written like 500 words about this and I didn't really have to stop to think, because some things have the capacity to genuinely excite us and bring us joy. So while I'd rather never get a new Dragon Age than get one made through crunch and disaster, I'm happy that a bunch of fools on the internet will still get so excited about what amounts to a tech test for glowing mushrooms that they spend hours discussing it online.