Good things, they say, come to those who wait. Like clichés in the first sentence of an article, this is often a load of toss, but a stopped clock is ("That's enough of that, thanks." - Ed).

Sands Of Salzaar leapt into Early Access this January, its huge success in China prompting promises of an English translation soon. But 2020 did a lot of things to the word "soon", so we'll forgive them for delaying that translation. Besides, it was worth the wait. Sands is a superb game that blends the hack and slash chaos of Dynasty Warriors with the open world RPG skirmishes of Mount & Blade.

You lead a customisable warlord around a land in which five factions jostle for control of fixed settlements, which caravans and busy farmers flit between to be preyed upon by roaming bandits, faction armies, or perhaps yourself. Comparisons to M&B are fair, but Sands has a slightly more traditional hack and slash RPG structure built in. Treasure chests and piles of resources appear on the map, along with periodically regenerating plants waiting to be picked and squished into potions. Fixed structures like statues, caves and tents offer little dungeon dives for training up your troops, gathering XP or gambling some cash and supplies against the chance of fancier items.

Most of all though, you'll want an army because seeing them fight is spectacular.

Troops? Well yeah, obviously you need an army. Thanks to its damage system and semi-automated, MOBA-ish combat (though don't let that put you off if you, like me, hate MOBAs), you won't beat a fighter five levels above you. You just don't have the health or damage output for it. You need a gang. First, they keep you alive, and second, each unit you recruit produces a little sprite that follows you around on the map, just like the NPC armies. It's neat.

Most of all though, you'll want an army because seeing them fight is spectacular. Neat lines of maces and pitchforks immediately dissolve into chaotic clusters of spears, camels, damage indicators, and spell effects. Assassins fling knives from the edges, witches bathe allies in empowering light, your snakes suddenly appear to bite some hapless archer. A hero lets rip on her magic harp, launching toxic explosions into the fray, while you set off a chain of special attacks, cutting a wuxia-style path through the front lines, then setting off the air arcana power you learned off that wizard the other day. Half the screen is blasted off their feet, but this is only the fraction of the battle you can see as a hundred more people fight all over the place, and did she just say 'snakes'? 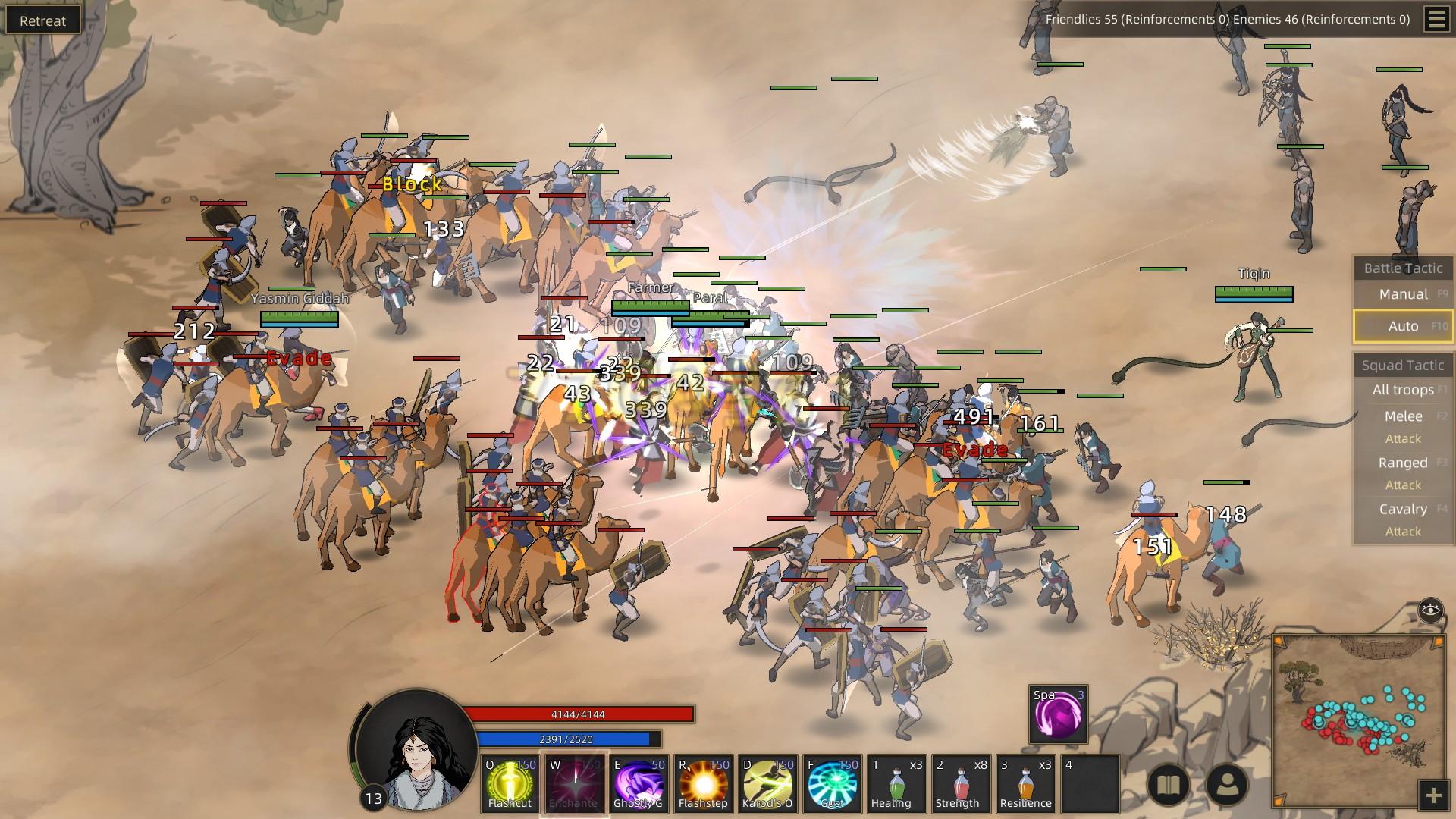 Yeah, you can hire some snakes. Or wolves, or, depending on your settings, more fantastical creatures. There are loads of units, tonnes of items to load up on, heaps of special powers, and odd little side jobs and secrets tucked away in corners of its understated but attractive world. As you play you'll unlock more player classes and starting options, adding lots of replay value to an already moreish game. My blade dancer is fragile but very fast, and piled high with devastating power attacks, while my beastmaster (who has their own subplot) can turn into a variety of war animals.

Sands Of Salzaar has a slightly clunky UI, and it's a tad opaque even with the solid translation. Its fights can even get too chaotic, but when I charge with my haphazard gang into a hundred angry soldiers, I'm having too much fun to care.