For the first few months during lockdown, I spent some of my time at home working on a model greenhouse. I used white glue to attach small pieces of wood to other small pieces of wood, making door handles and boxes of pot plants and watering cans. There was an undeniable feeling of safety in the sway of a life in miniature. That is, up until I got overwhelmed by the prospect of finishing a project and let the pieces while away unglued on my bookshelf.

Perhaps I’ll get back to it at some point. In the meantime, the charming little diorama homes in The Almost Gone are here to give me my tiny-house fix.

In Happy Volcano Games’ June release, you play as a young girl exploring her family’s secret histories in dreamlike scenes. As you play, you come to realise that you’re stuck in limbo - a space between life and death. It’s not clear whether or not you’re going to make it out of this limbo alive, but you’re going to have to make it through. And, of course, because this purgatory is a point-and-click game, you’ll have to solve and handful of poignant puzzles to do so.

The Almost Gone presents you with a series of delicately decorated rotating rooms; each of which contain some of the aforementioned puzzly bits. As you click through this series of pleasantly-pastel dioramas, you unlock pieces of your past. First by learning about your own childhood. Then, as the colours change and the music shifts, you puzzle your way through your father’s childhood. And then, as the dream shifts once more, their various speculative presents and futures. 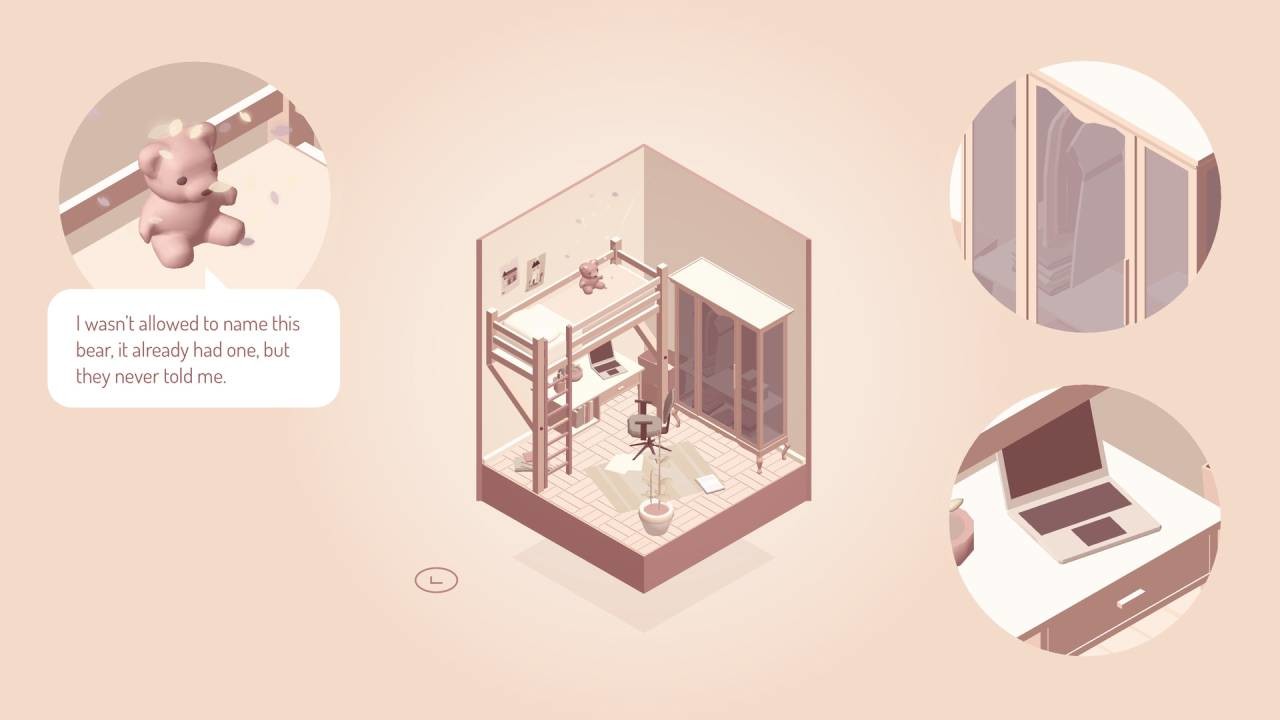 The Almost Gone feels a bit like a nod to Giant Sparrow/Annapurna’s What Remains Of Edith Finch in its willingness to explore the dark corners of a family’s history, but by way of Ustwo’s Monument Valley in its poignance and ambiguity. I certainly found the game to be at its most compelling when I was rotating rooms to get to different angles, or discovering narrative tidbits about the player-character’s family history. Occasionally the grimness of the storyline can get ahead of itself, and the writing gets a bit too cliché for its own good. Ultimately, though, the game is pretty enough that I’m more than willing to give it a pass for its occasional staid or hackneyed line.

I enjoyed my time with The Almost Gone and I’m glad I managed to find some time with it before the year was over. When you’re done with your traipse through limbo and you’re looking for more games like it, you can try out the previously-mentioned What Remains Of Edith Finch, Monument Valley, or some of my favourite tableaux games, like Turnfollow’s Packing Up the Rest of Your Stuff on the Last Day at Your Old Apartment.