We are living, we are constantly told, through unprecedented times. Years like 2020 are the kind of years that make me think things like "woah, we are living through history, like, all the time", like a stoned 20-year-old gap year dude coming to self awareness for the first time in his life.

In Mesmer you get to be the history maker, in an old-world, European-esque city that is ruled over by a corrupt monarchy. Leading a revolution and storming the castle is, as it turns out, quite difficult, and requires a complex balancing act.

You bounce around the cheery, colourful, 3D streets of this picturesque city, the cobbles littered with petals, the rooftops strung with bunting, and start to uncover the rot and discontent. Rabble rousers or anyone the shiny-hatted guards are generally sus of get punished by having a fully enclosed horse mask whacked on 'em. Spreading sedition against the king? Trying to raise an army of peasants? That's horsin' behaviour for sure. You soon witness your friend get horsed for instigating a strike at the cannery.

Trouble is, you're the one who she got to do the instigation, so you're liable to get horsed by your second night in town if you don't get people onside. There's no going back, so you have to push forwards.

You can't blackmail someone into giving you more blackmail on themselves, because what are they, an idiot?

There are various factions in Mesmer, and they're swayed by different interests. The artist set necessarily have different goals to the nobles, and so too the rich merchants and the downtrodden workers. You raise or lower your standing with the different groups by doing favours and keeping promises. But favours often require you ask someone else for another favour, so you end up with a complex cascade, a chain of favours going back to this one guy who just wanted a sandwich.

Sometimes you can just persuade someone to do something for you, in a kind of roulette wheel mini-game that you can tip in your favour with bribery, blackmail or threats. It becomes surprisingly complex - if you try and blackmail someone into giving you more blackmail on themselves, you're going to fail even if you win the roulette game, because what are they, a fucking idiot? And you can't bribe the cannery owner with food because he already has loads of it.

You can also stand on a box and yell things at the crowd, balancing the points you make so that you don't lose too much standing with a group, or riling one load up so much they push back at the cops. But bullhorns are, unfortunately, single use, so you'll probably have to do another load of favours to get another... 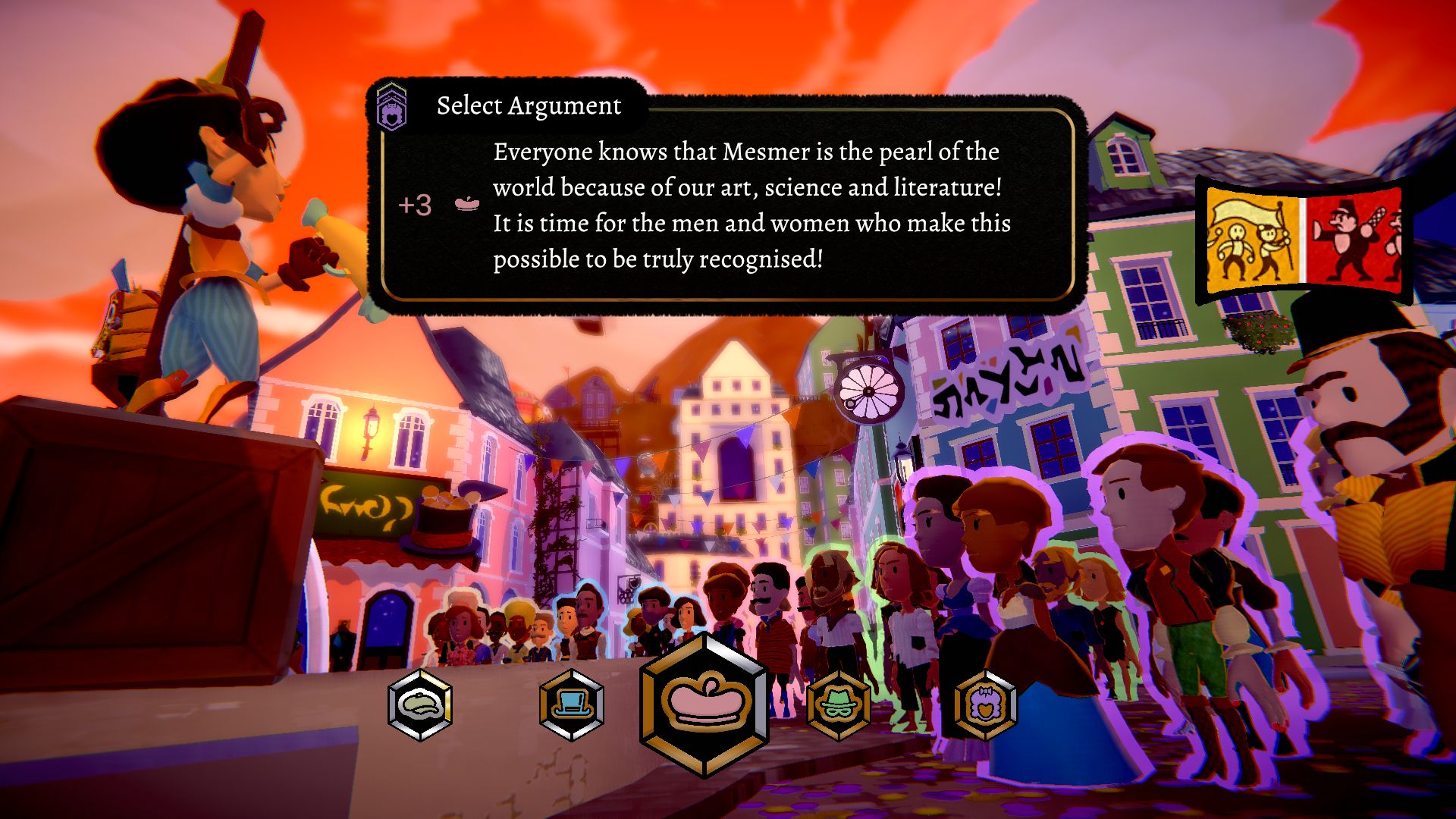 Mesmer isn't perfect - you don't have a journal to remind you, for example, who you have to talk to to secure a new bullhorn. This becomes a large problem when you have a lot of things to do, which is practically all the time in Mesmer, and it's annoying if you step away from the game for a day only to return and have no idea what the fuck is going on or who you owe a shakedown to.

But for all that, I've found it a lot of slightly hectic fun, not to mention a bit cathartic, and though I have yet to successfully lead Mesmer in revolution, I'm going to keep giving it a bloody good try.

I played a demo of Mesmer when I was investigating the best of the Steam Autumn Fest, and you can still try that demo out now if you want to see if Mesmer is for you. Otherwise, Mesmer is available via Steamor GOG for £11.40/€12.50/$15.