Two weeks ago Auckland, New Zealand was the home of ExileCon, the first of possibly many conventions celebrating the increasingly popular action RPG Path Of Exile. While the mood was obviously buoyed by a trio of well-received announcements (a mobile spinoff, a pair of expansions, and Path Of Exile 2), what I found on the other side of the planet was a community and studio united in their love of the genre and the game Grinding Gear is making.

That, and a trading card game that threatened to take over everything.

On the morning of the convention, a crowd gathered outside of the Aotea Centre. The building was still half-wrapped in plastic sheeting to protect some in-progress external renovations, so the convention was shrouded in mystery in both a physical and metaphorical sense. Anxious fans milled around, forming camera-wielding clusters around the dozen or so bold enough to arrive in full cosplay. Several people I talked to mentioned that a massive social event like this was outside of their usual comfort zone, but their love of the game, and their excitement for the day's announcements, had been enough to compel them take the plunge. I met people who hailed from places ranging from Australia to Austria, and others from America, Finland and beyond. 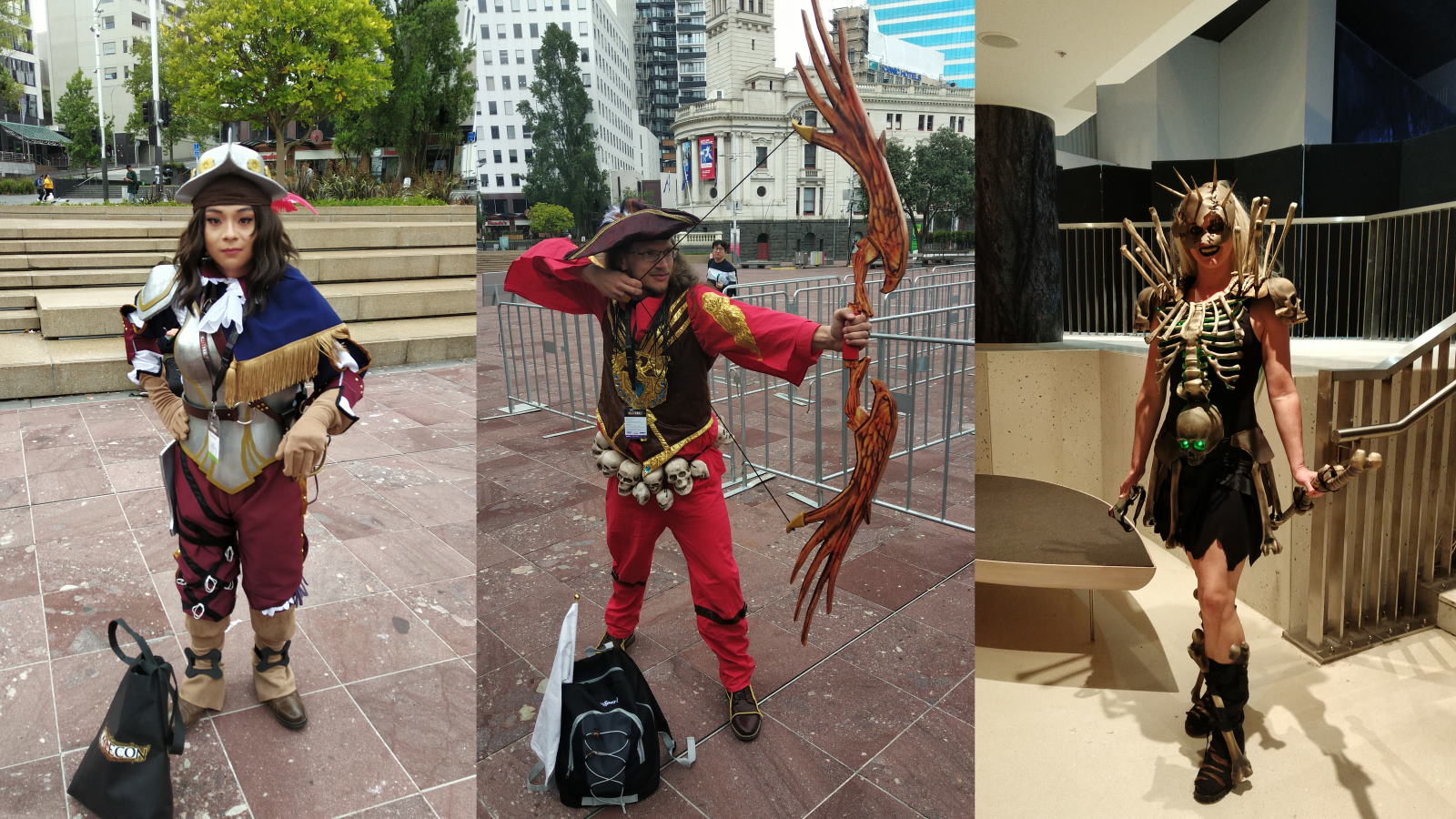 Grinding Gear seemed to be aiming for the con to be so over-the-top it was almost hard to take seriously. The keynote show was introduced by actor Jay Simon fully in character as the mad huntsman Einhar Freye. Scenery was chewed, and he bit through any tension in the atmosphere long enough for a visibly nervous Chris Wilson, Jonathan Rogers and Erik Olofsson (the three founders of the studio) to take the stage. Wilson in particular seemed genuinely stunned by the cheers from the audience. You can watch their introduction in the Twitch archive below.

After the keynote, much of the crowd filtered out to try Path Of Exile 2 for themselves, but soon found another distraction. What nobody could have expected was the runaway success of the official convention card game. As a cute little aside and a way to meet developers, each con-goer found a handful of trading cards in their complimentary swag bags, most of them representing low-level equipment from Path Of Exile. The goal of the card game was simple: kill the developers.

Every Grinding Gear member of staff (and almost all were there, from coders to QA and server admins) was wearing a custom T-shirt stating their name, their position at the company, what monster they were playing as and what their stats were. If your equipment matched or exceeded their stats, you could claim some loot from them, at the cost of them permanently lowering the durability of some of your gear. It was meant to be a clever little distraction, but ended up almost dominating the show.

I myself made very little headway in the card game, but others were aiming for the top. Those committed enough would ascend through the final boss of the main game, Kitava, then grind through the Atlas Of Worlds (hosted by the endgame NPC Zana, played by her voice actress in full costume), before a final boss fight with Wilson himself, his shirt practically overflowing with damage and resistance symbols.

I got some time to talk to Wilson. He told me something about Path Of Exile that I'd never noticed before.

Impressive, considering that most of the map generation in Path Of Exile is procedural. But even so, the river forms an unbroken line through the vast majority of the game. Wilson mentioned that at one point they'd also considered having half-buried skill gems visible in the riverbed, but players might have ended up wanting to just pan for gems instead of fighting for them. 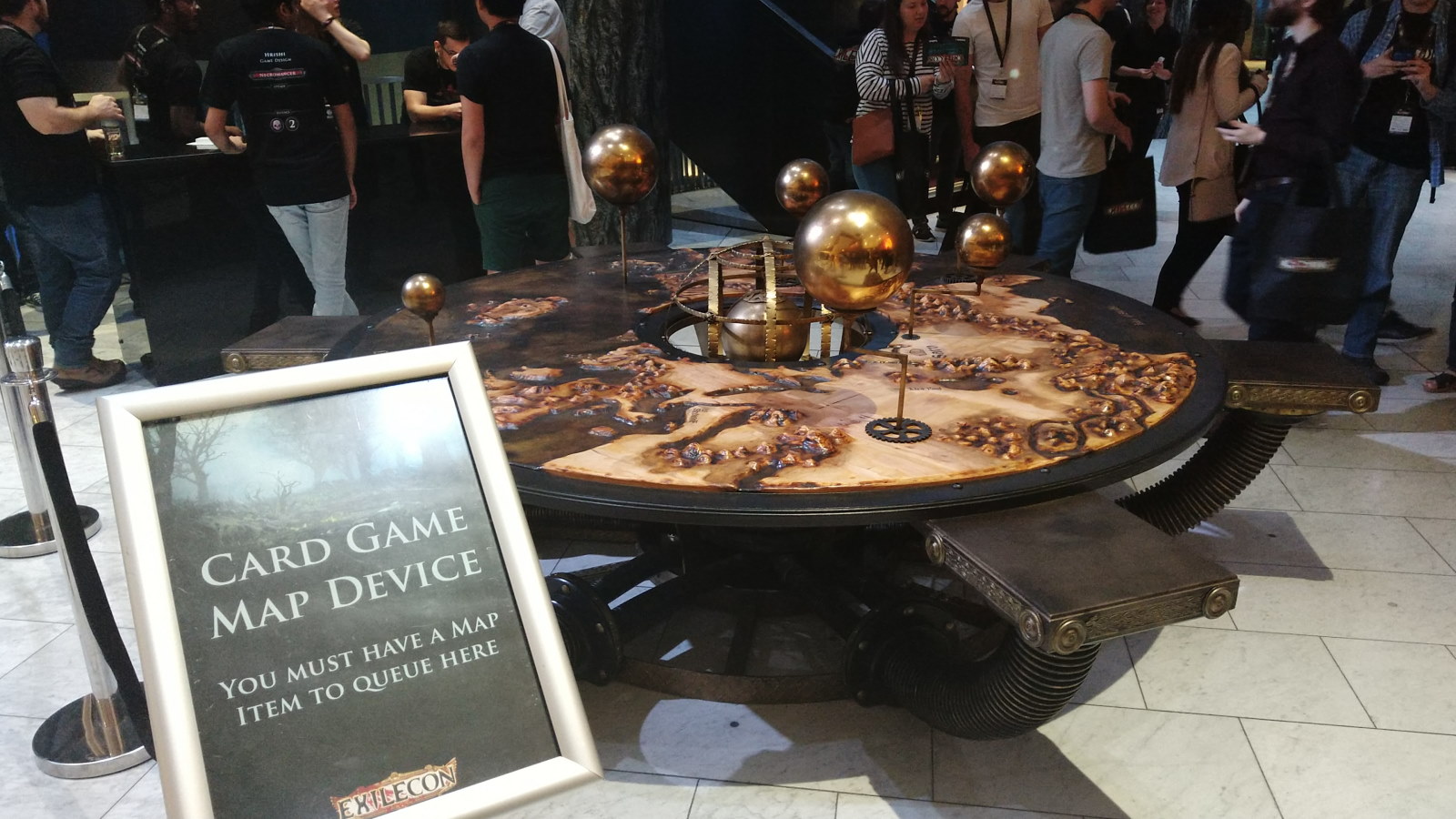 Mindful of where we actually were, I asked about the workload involved in producing a whole new wave of Path Of Exile products and organising a convention at the same time. He told me it has been a big learning experience.

"We are very against overtime in game development - it's bad. We understand how to get our expansions together in a way that doesn't require too much overtime," he said. "What we do not understand is how to run an event in a way that does not require overtime. The people putting the event together certainly had a hard deadline on something they were inexperienced with."

It had been a "toss up between New Zealand and Vegas" for the con. "There's advantages to Vegas," he explained. "There's the whole infrastructure. It's cheap to fly, there's tons of cheap hotels, there's lots of space, there's the entertainment options, and you get all of America. You could put on a much larger expo." But in the end they picked New Zealand, as it would make the convention easier to manage on a number of levels. "Plus we're getting back to work this week to make 3.9.0 as good as we can for December. If we went to America," Wilson joked, "all the staff would cash in their annual leave and go missing for a month."

I got the feeling he was only half joking about that, though. As well as continuing work on Path Of Exile 2, Grinding Gear are trying to get two expansions out the door simultaneously, in time for December 13th. So, while Wilson told me he definitely wants to do another ExileCon, next year seems unlikely. Not only did it take almost a year to organise this show, but they wouldn't have much to announce by this time in 2020, aside from maybe a release date. Maybe 2021, then.

For a first convention, ExileCon has gone over well. The VIP dinner held for attendees who splashed for $500 tickets was well attended, and the 15 $1000 Ultra VIP tickets apparently sold out in about five minutes. More importantly, the crowd were evidently enjoying themselves, talking intensely about endgame character builds as they queued to pretend-murder the devs of the game they loved. Wilson headed back out to maybe get killed a couple more times. He said several players had defeated him already.

Attendees who paused in the card game were treated to a gothic excess. At the heart of the convention stood a gnarled tree, its roots concealed by fog-machine effects on the floor. Corpses hung from it. There were displays of props made by Weta Workshop and a merch store featuring cute plush monsters impaled on wooden stakes, with fluffy entrails erupting from their hides. Art prints from the game were available for the less adventurous.

Game designer Daniel Armstrong was in the game as a Tormented Spirit. He mentioned that he'd had to give out about 16 whole boxes worth of loot cards to players that had murdered him over the course of the show. He told me that, while it was a joint effort, the card game was mostly the brain-child of Carl de Visser, a designer who had sadly left the studio just a month prior, so didn't have the chance to see his creation grow out of control.

Daniel has been with the studio about six years - not since the very beginning, but long enough to be involved in a lot of their major updates. He seemed especially proud of the work he'd been doing on Path Of Exile 2 right up to the start of the show, specifically working on a mid-demo area called Grimtangle, a dark and confusing subterranean crawl filled with explosive fungal zombies. He seemed satisfied when I said I'd lost control of the situation and died a few times in there. It seems he fully intended for it to be a bit of a difficulty spike.

It's not out of character. Path Of Exile is difficult and lengthy compared to other ARPGs, and just getting through the main story is a solid thirty-plus hour ordeal. But at the end of the convention, the majority of the crowd gathered back into the main hall to watch a four-way speedrun race. The players - "Tytykiller", "Tie23he", "Waggle" and "Havoc" - blazed through the first five acts in just over an hour. Tie23he won, and left with thunderous applause at his back, plus a trophy and a sizeable cash prize.

I spent time after the show closed chatting with Hrishikesh Sidhartha, a designer of unique items who joined the team in 2016. Originally a fan and supporter of the game, some of his unique item concepts were added to the game before he got professionally involved. He later moved all the way from America to join the studio. Sidhartha seemed overjoyed to be at ExileCon and had a nervous energy to him. As both a designer and an avid fan of Path Of Exile, being surrounded by fans of his work was an exciting experience.

Sidhartha told me that he and many others at Grinding Gear have regular non-developer accounts that they play with whenever a major update launches. It's one thing to design unique gear (which all require new edge-case rules added to the code, making him a terror for the programming team), but it's another thing to hoard it and come up with the item synergies required to make it really sing. Throughout the convention, that's what stood out most to me - the line between fan and developer, designer and player, felt as thin as it gets.

The card game was supposed to wear that dividing line down further, but it seemed Grinding Gear didn't anticipate people happening to it. Somewhat torpedoing the game's purpose as a way to meet and greet developers, large queues formed to farm them as monsters. Players with special currency cards to upgrade the gear in their deck faced long waits at the crafting table on the top floor, so extra staff had to be diverted to run a second one. Several people deserve a shout out for going above and beyond, like Team Zomboys who, with their single hit point, quickly became the target of every low-level player: 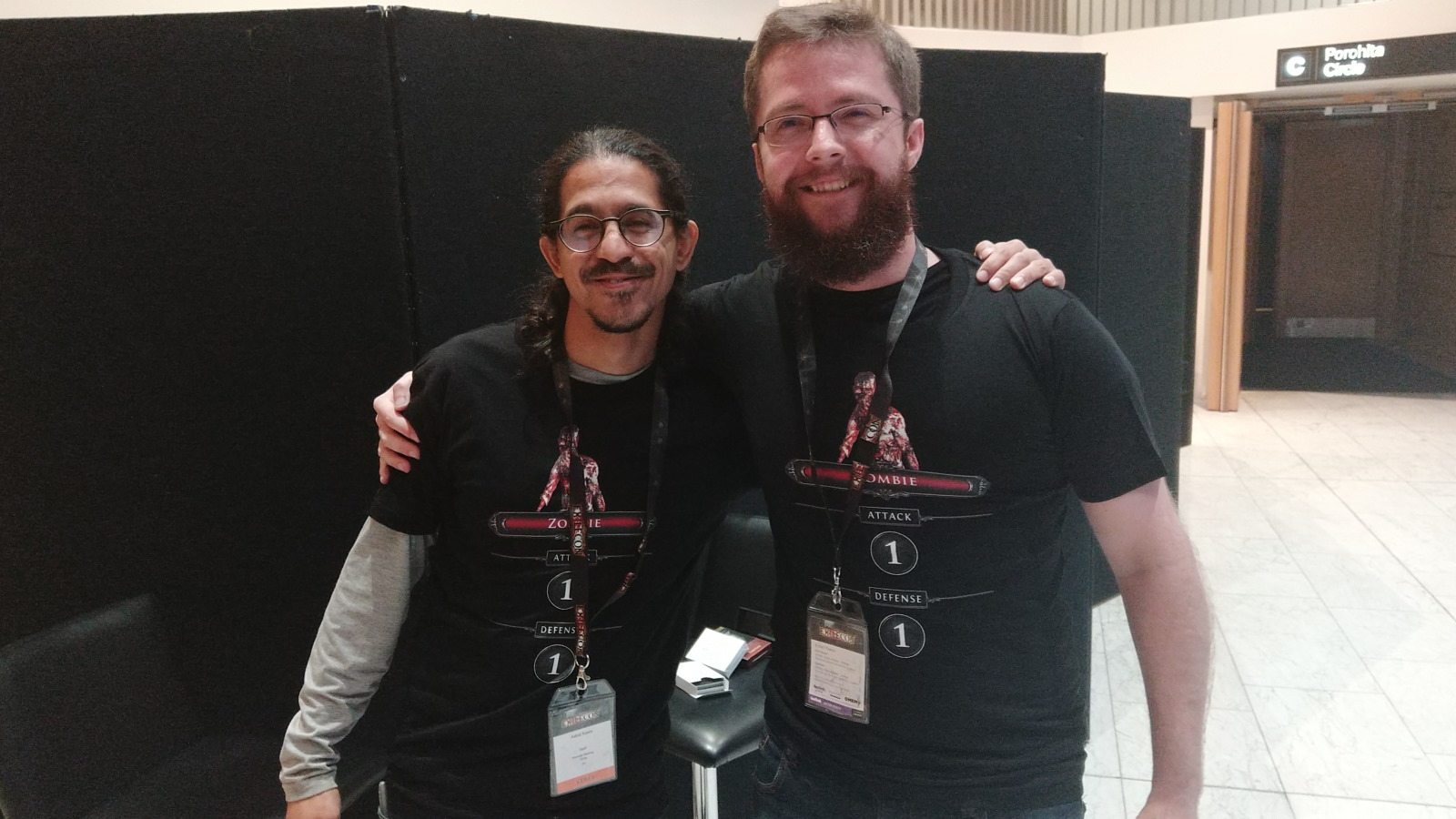 Team Goats of All Time (aka Goatman and The Faun) even dressed up for the part. 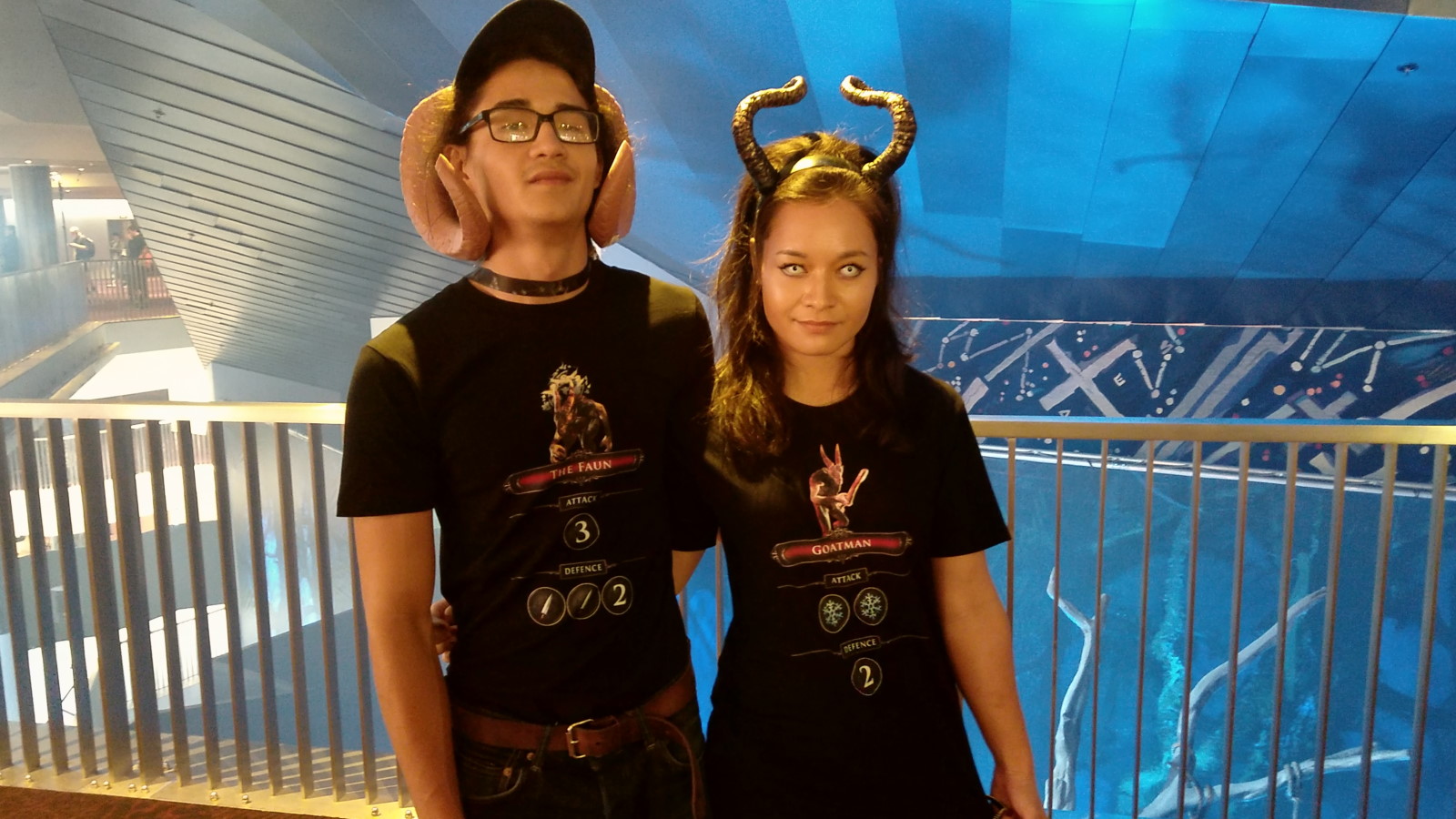 And of course, the mid-boss tag-team of Solaris and Lunaris were seldom seen apart. 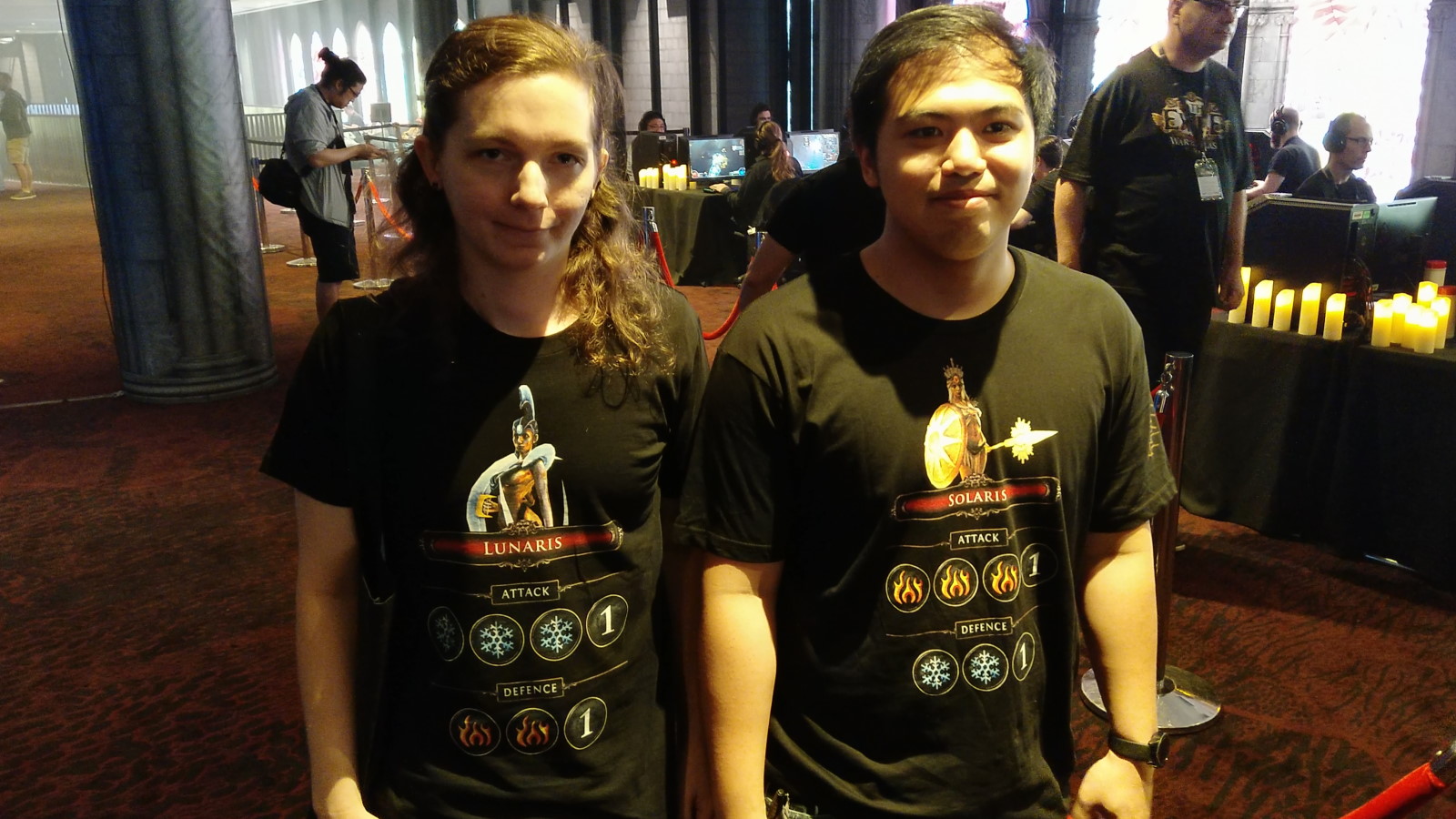 Even the convention guests of honour admitted that they'd spent much of the convention grinding their way through the development staff. Blizzard North founders David Brevik and Max and Erich Schaefer, who were on stage on the second day, could be frequently seen on the show floor with cards in hand, queued up to slay another hapless monster. I can't help but wonder how close they made it to challenging Wilson.

At around 140 staff, Grinding Gear Games are the largest games studio in their corner of the world, but none of them seem to think of themselves as a big influential outfit. Even at a convention full of excited fans and cosplayers, I got the sense from the developers that I talked to that they still feel like a scruffy little indie garage outfit. From high-level designers down to junior UI artists, they frequently talked about making the game they wanted to play. 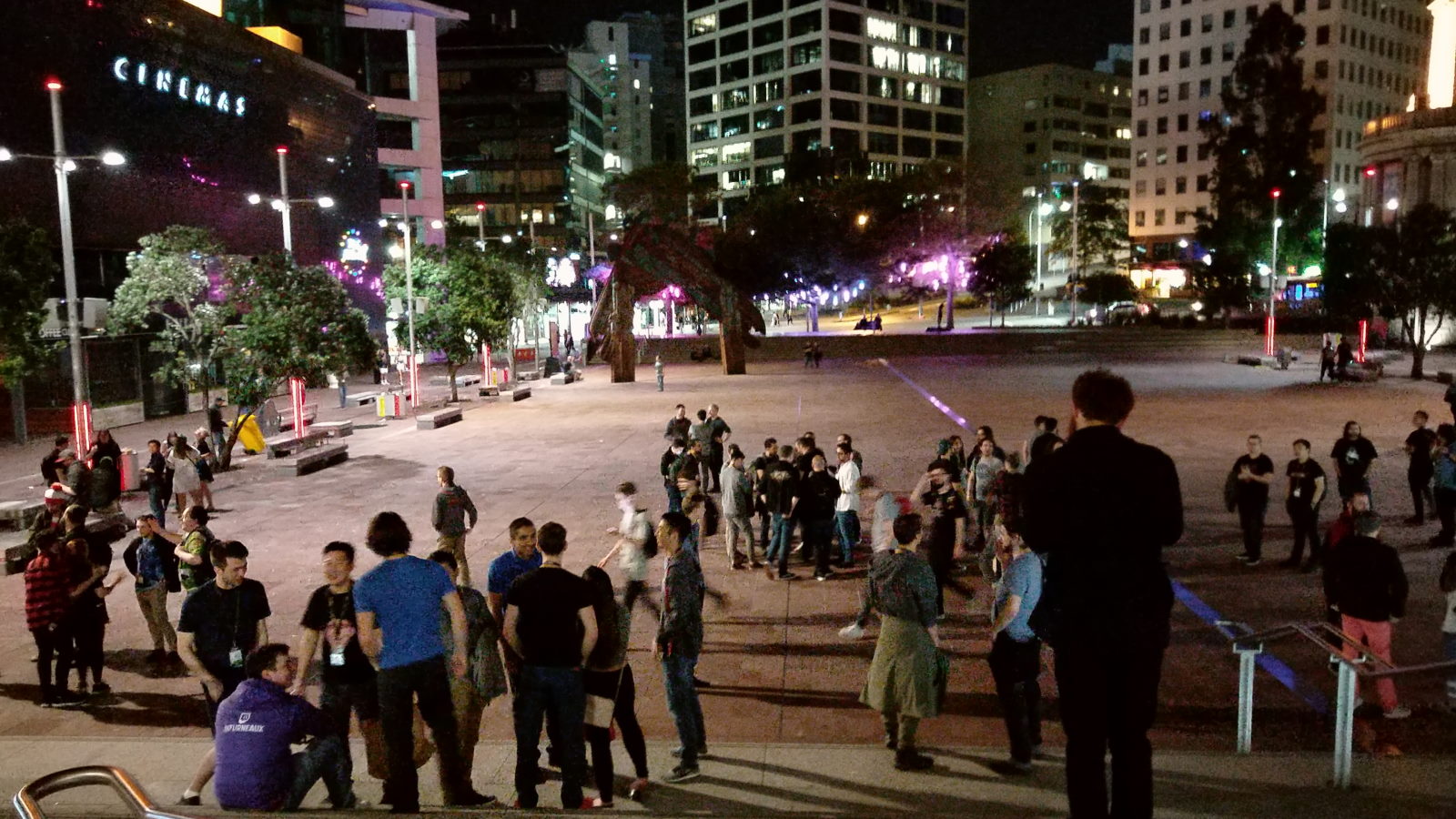 Most of the crowd returned for the after party, a remarkably chill affair. The roots of the big spooky tree on the bottom floor no longer held demo PCs, and had instead sprouted beanbags to collapse on. Hot snacks were circulated, and a small swarm of people with energy to burn after the weekend were going wild in the lobby, now an impromptu dance-floor. This was the end of ExileCon's first year, but I'm betting it won't be its last.

Disclosure: Grinding Gear Games paid for my travel and board for the weekend.