During their Saturday opening keynote presentation at ExileCon in Auckland, New Zealand, Grinding Gear Games announced three projects: Path Of Exile Mobile, a double expansion for POE this December, and Path Of Exile 2, due late next year. I got three hands on playthroughs of the sequel's show-floor demo, and I think all action RPG fans should be paying attention to it, even if you bounced off the original game.

While Path Of Exile 2 feels like a standalone sequel, it's due to be delivered as a free, massive update to the game around the end of 2020. When starting a new game, players will be prompted whether they want to play the original or POE2 campaign. The latter is the new seven-act story, set decades after the original and starring a new set of heroes representing the original seven classes. In the demo, only Marauder, Ranger and Witch were available, chosen from a brutal character select screen. As in the original, the player is a condemned criminal, but this time they're about to be exiled... from life. Whichever character you pick from the gallows of the impending mass hanging is lucky enough to have their noose break, letting them bolt for freedom and wash up on a nearby forest river-bank.

The first thing that struck me was how good POE2 looks - the result of a suite of renderer upgrades, all new player character models, animations, physically simulated clothing and more. Compared to Path Of Exile as it is now, it's a very pretty game. While the basic HUD is almost unchanged, everything else looks refreshed. Playing the demo also made it obvious that there have been improvements to the procedural world generation. Quest progression is the same each time, but environments feel more organic and the exact layout of the world map is random, right down to towns having dynamic entrance and exit points.

The environments are varied in the opening act, too. The riverside landing leads quickly into a cosy but besieged little village, reminiscent of Tristram from the original Diablo. Beyond that, there are dark forests and overgrown battlegrounds, and a tunnel that runs through a giant tree's tangled roots and out into a graveyard. There are Crypts and tombs aplenty, valleys overgrown with gigantic rose-thorns, and more besides. There was lot to cover in the scant 45 minutes the demo allowed, and only the most experienced players saw it all. Even over three runs, trying each class once, there were still parts of the demo I only got to experience over the shoulders of speedrunners. 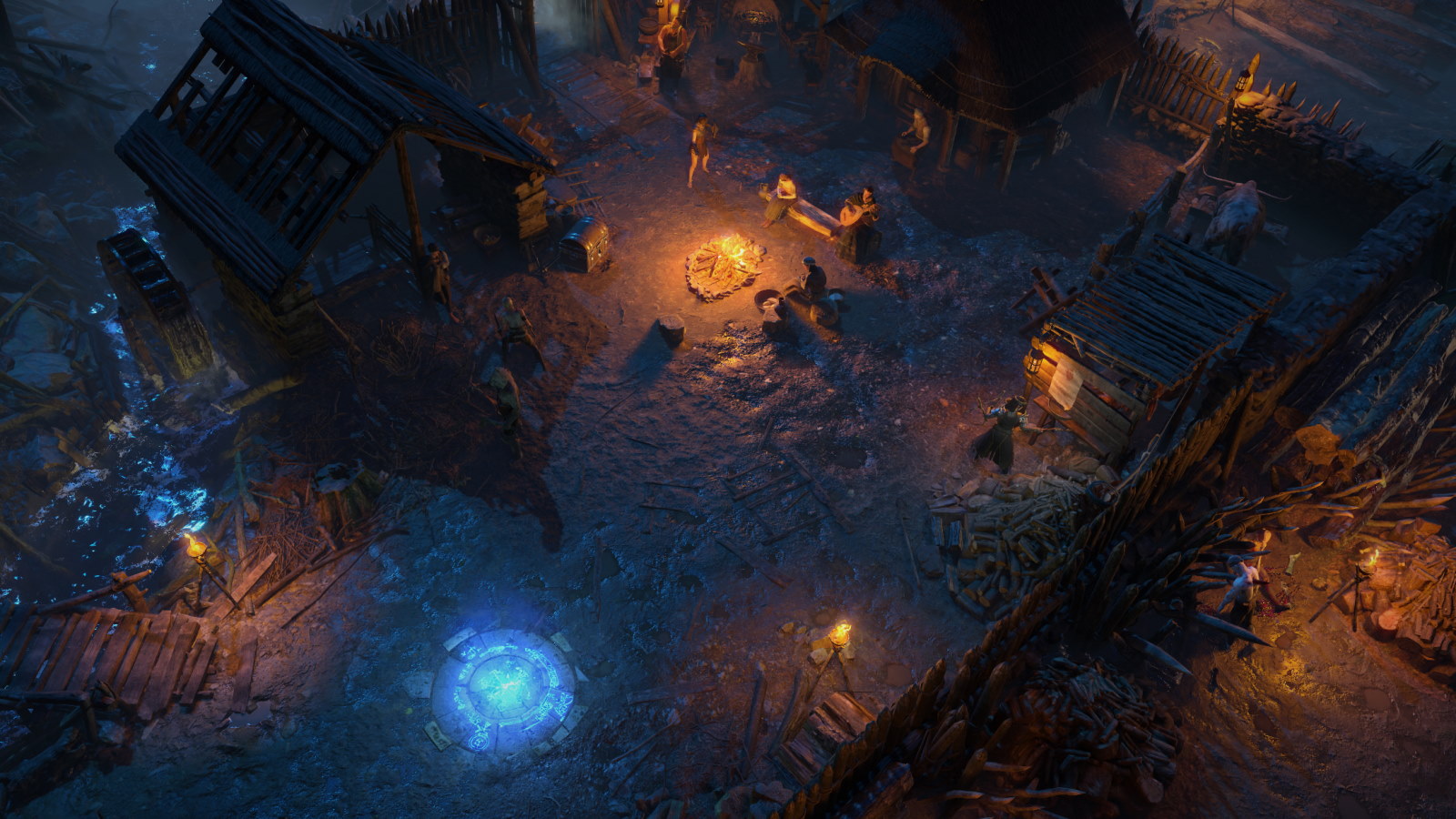 Studio head Chris Wilson confirmed that POE2 is going to be more of a globe-trotting adventure, showing more of a wider world previously only hinted at. One act sees the player travelling around the desert on a mobile caravan-town, while another appears to be aboard a ship (which Chris pointed out had a waypoint on board, and is a "prominent feature in act three").

A common complaint levelled at the original POE is that its standard armour sets are just plain ugly. You're a shipwreck survivor, washed up on a cursed shoreline and equipping yourself with whatever rusted trash you can scrounge up. POE2 is set well within the bounds of a civilisation which has (mostly) recovered 20 years on from the original's grand deicidal rampage. The monsters you find yourself fighting are a recent problem. This means is that the first town looks more like a fortified village with a functional blacksmith's forge and less like a medieval lepers colony. Similarly, the equipment sold there is in matching sets, and halfway decent looking. You might not win any fantasy fashion awards, but your characters will at least look the part right from the start. 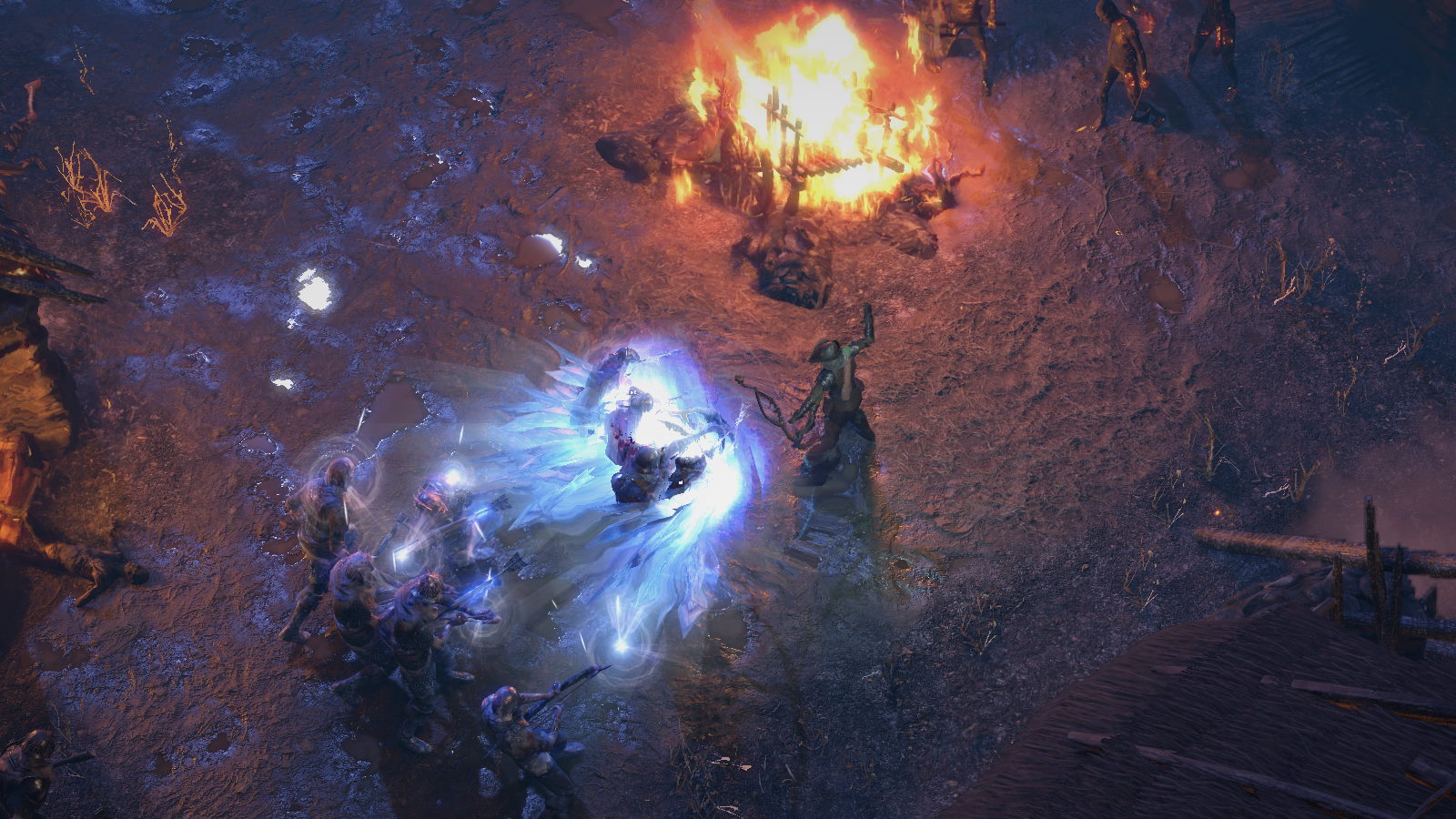 But changes in POE2 are more than cosmetic - and most immediately felt in the combat. Enemies behave differently in this new campaign. Swarms of distracting 'popcorn' enemies are accompanied by heavy-hitting middleweights capable of tearing off a huge chunk of your health in one hit. But they have well telegraphed wind-ups, and PoE2 gives you a movement Skill Gem early on, letting you dodge out of the way if pressured.

It's a style of play that wasn't possible during the early days of POE, where encounters were designed around enduring attacks through dodge, health and shield stats. Now, POE2 is leaning a bit harder on the 'action' side of 'action RPG'. I found this represented most strongly in Grimtangle, an area overrun by fungal zombies. The ground is covered with landmine-like explosive mushrooms, and bigger enemies can blanket the arena with damaging spore clouds, so fast footwork and target prioritisation are essential. 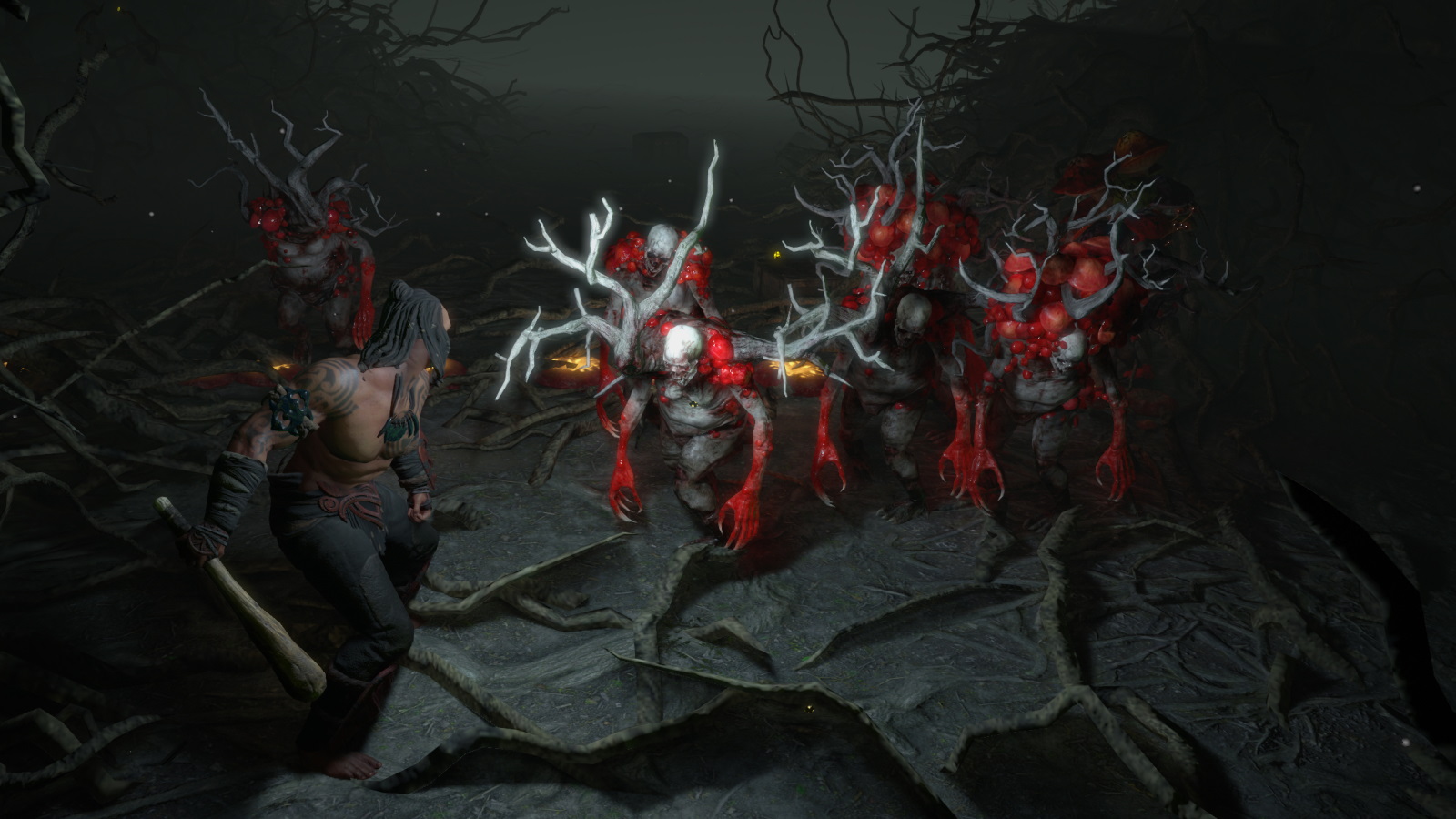 This focus on footwork and tracking your enemies applies doubly to the four major boss fights and several mini-boss battles in the demo, too. They're all beautifully animated, multi-phase affairs where attacks can tear off half or more of your health. It's hard not to draw comparisons to FromSoftware's influential hack n' slashers, as there's just something fundamentally Dark Souls-ish about dodging and warping your way around big telegraphed swings while looking for an opening. It's harder still to shake this impression when you realise a lot of the boss designs would be right at home in Bloodborne.

The first major boss of the demo, the Devourer, is a gigantic clawed worm-beast living in the tunnels outside the starting village. Its largest attack requires you to take cover behind the arches formed out of its body. My favourite fight in the demo was the Rust King, a hulking humanoid construct built out of corroded armour and weapons. Between his metallic yells and combat animations, it feels like a real duel, punctuated with the occasional wave of rusted soldiers. 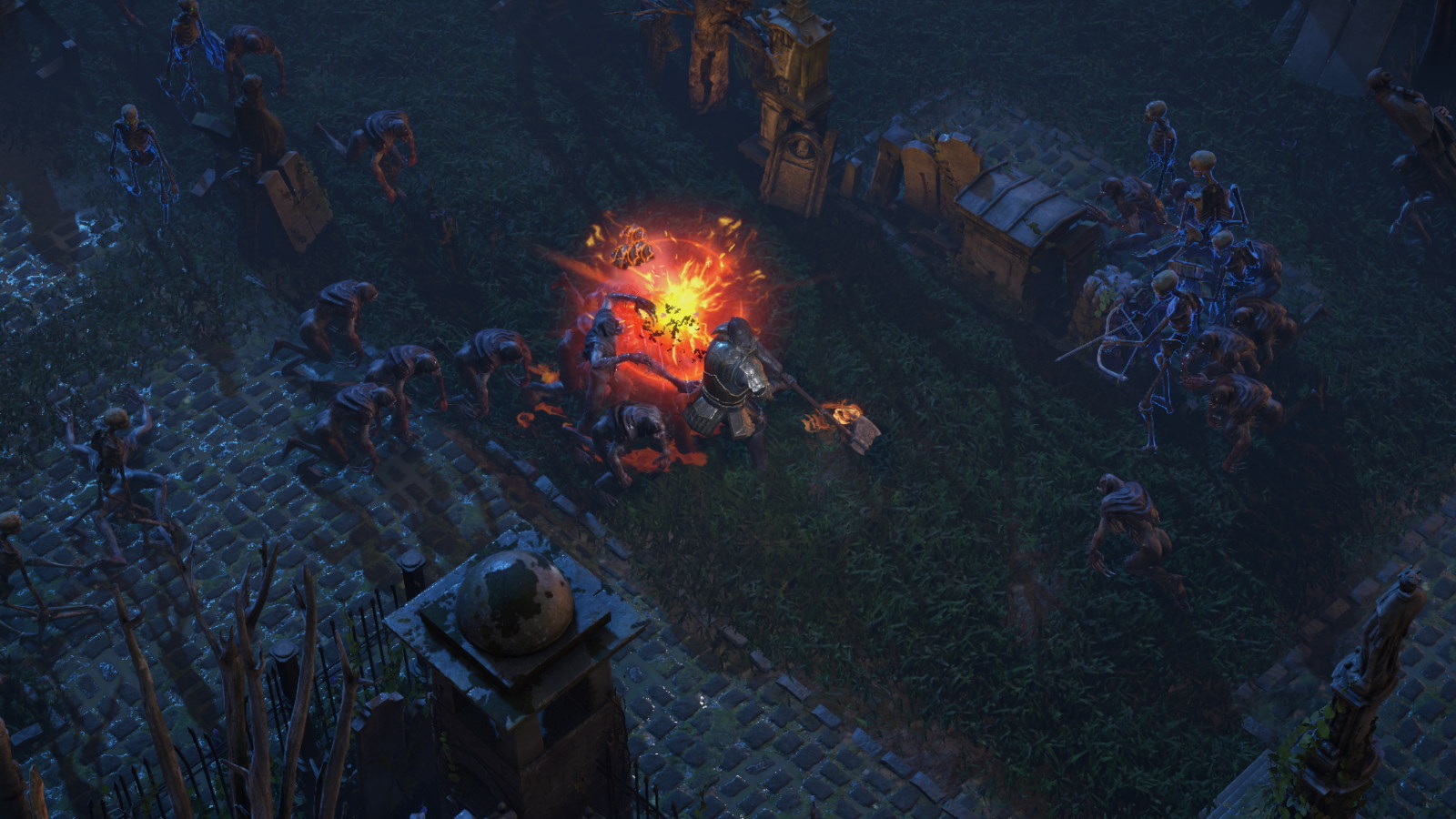 While major bosses get the most love, unique mini-bosses are still more distinct than in the original, and often have their own bespoke arenas and combat barks. I especially liked the Bearer Of Repentance, a buffed up version of the gravestone-swinging Burdened Wretch enemies that I encountered in the graveyard. As with many other mini-bosses, I heard him before I saw him, and he accompanies his enormous rolling shockwave slam attacks with bellows of "JUDGEMENT!" and "REPENT!". It felt like he'd walked straight out of Blasphemous, and I am very okay with that.

I never even got as far as the Crowbell boss shown in the gameplay walkthrough below. Wilson explained that they tuned the demo a bit harder than it will be in the final game, due to most players at the con being experts, but they're aiming to make POE2 more challenging than the first. Personally, I'm hoping that they don't tone down the difficulty too much for launch.

When it does launch, POE2 will come with a heavily revised skill system, which will also apply to the original game. It's designed to be both more comprehensible at lower levels and more flexible at higher ones. Before, Skill Gems (items which bestow combat abilities and spells) and modifying Support Gems had to fit into randomly defined sockets in your weapons and armour. It made upgrading between gear an ordeal, to say the least.

Now, each basic type of weapon and armour has the same sockets every time, and they exclusively hold Skill Gems. Wands always hold blue (magic) attacks, hammers always have red (strength) slots, and a full set of gear lets you equip eight skills (though that number can be extended via more esoteric gear). Support Gems, meanwhile, slot directly into your skills, independent of gear. This allows you to really start defining your own abilities from early on. 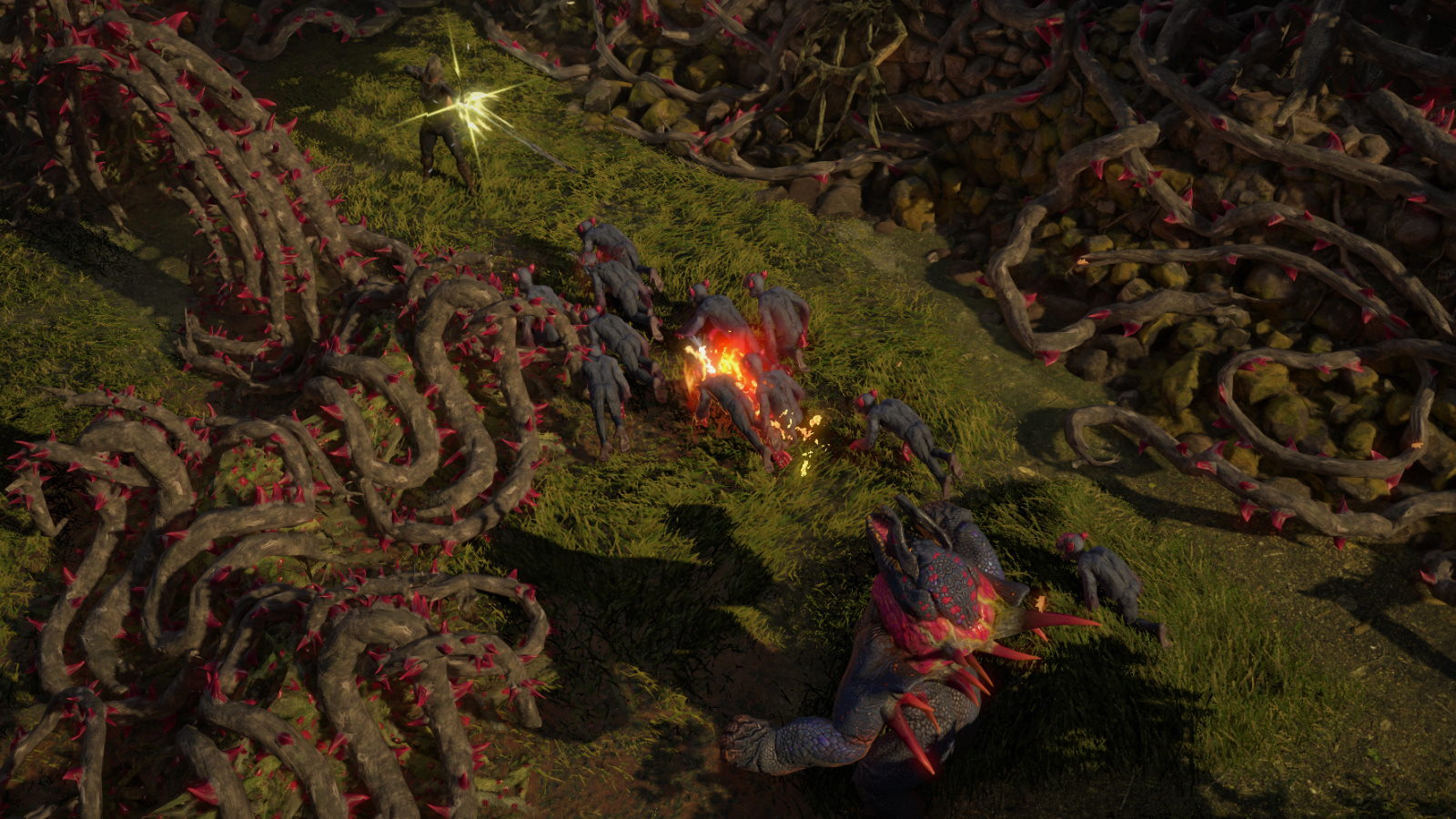 There are of course going to be a bunch of all-new skill gems for all classes (the one that players seem most excited about is Shapeshift: Werewolf, for perhaps obvious reasons), but there's also a whole new type of Gem to play around with. Meta Gems are skills that can hold other skills within them, albeit with some limits. Using a Meta Gem, a single button on your hotbar might activate three different stat-buffing auras simultaneously. There's also potential for absurd character builds, using Meta Gems that Cast On Damage Taken or Cast On Critical Hit to fire off a supernova of spells when activated.

Grinding Gear were also happy to elaborate on the nineteen new Ascendancy classes. Ascendancies are prestige classes, unlocked some ways into the story, each opening some fun new options to tweak your character build. While still early in development, one of the developer presentations up on the main stage showed off a pair of these new sub-classes, which look far more distinct than most in the original game. 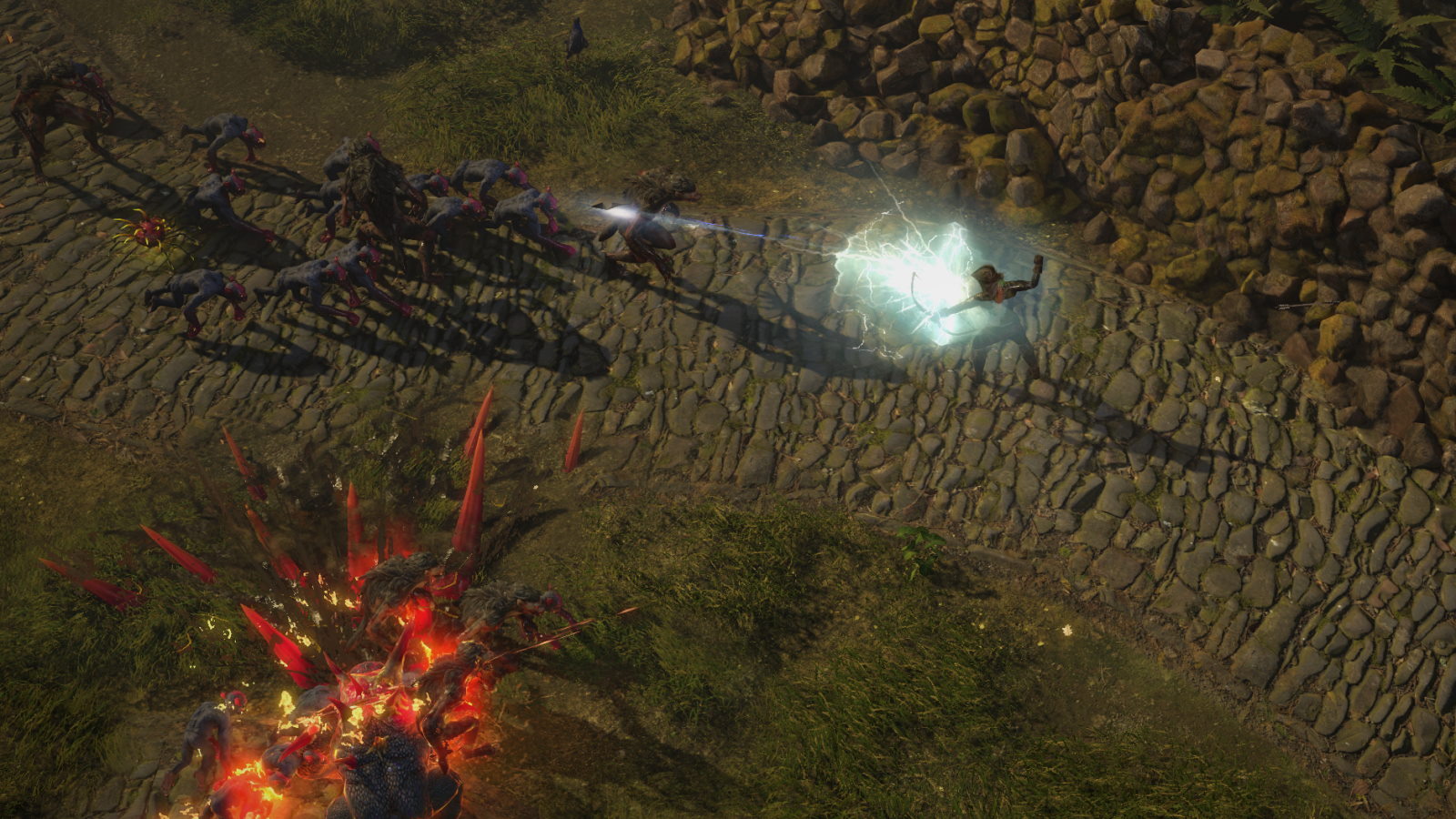 The Ranger Beastmaster can transform into a werecat, summon wildcats, and later upgrade her murderous mogs into more ferocious felines, making her a combination ranged/melee/pet class. A second Ranger variant shown was the Tactician, who specialises in crowd control via upgraded ballista turrets. Even more curiously, the Tactician will be able to use bows in melee combat, and the key art for the Tactician also features her stabbing at enemies with a spear, a weapon type never seen before in POE.

Just to heap more icing on the cake, any previously unlocked ascendancy will be permanently accessible on your account regardless of campaign being played. This means that you can bring a Beastmaster back to POE, or bring forward the good ol' potions-and-poisons Pathfinder into the sequel. Grinding Gear also confirmed that any stash tabs and cosmetic goodies bought for the first game will carry over too. A nice perk of having both games joined at the hip. 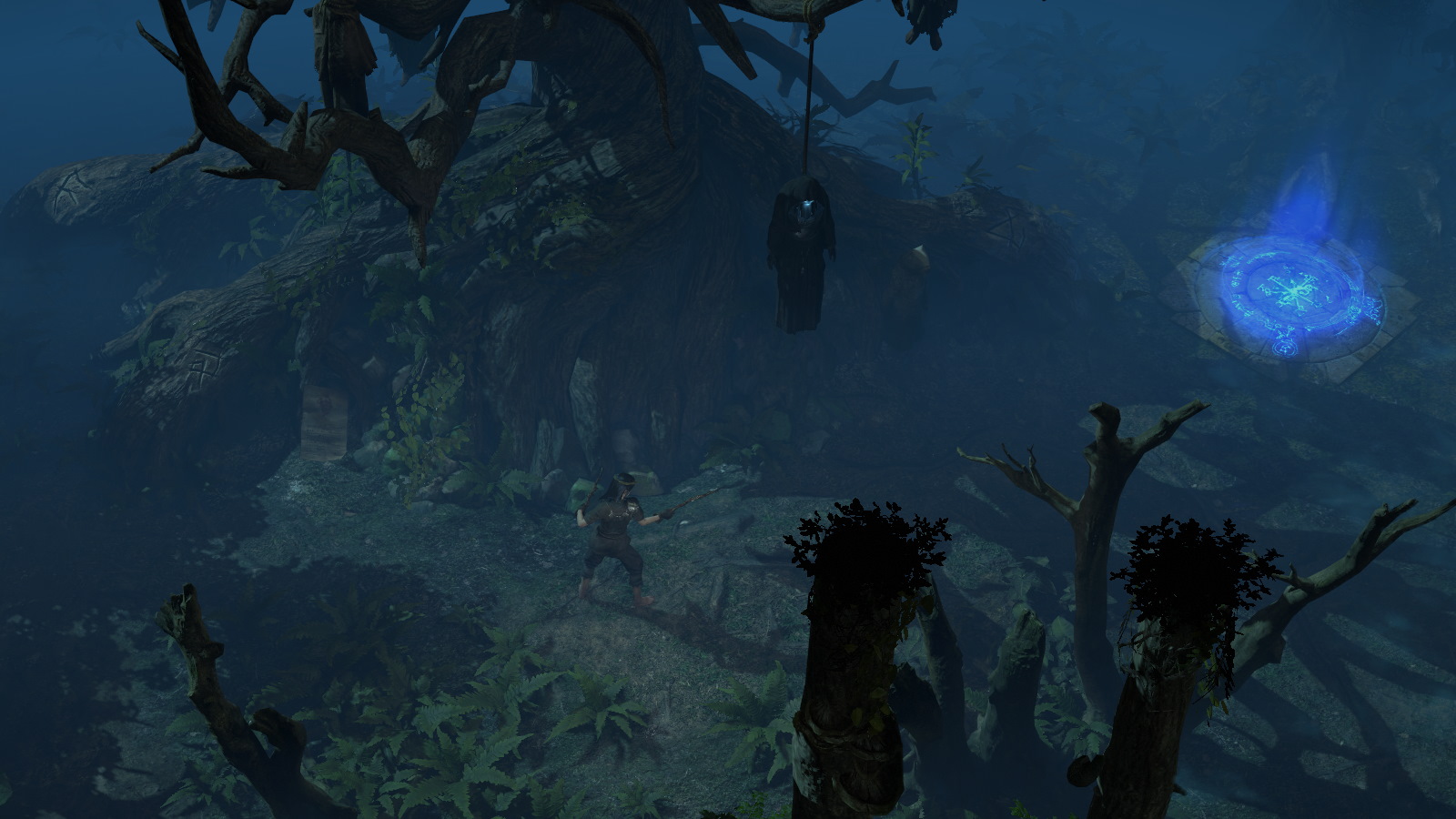 While the launch of POE2 is sure to be the biggest deal, Grinding Gear were keen to stress that there will be a lot of incremental improvements between now and the launch of POE2. The fancy new character animations will become a universal upgrade before long, and the overhaul to bow combat (including the new ballista turret skills) is landing on December 13th, alongside the new Metamorph league and Conquerors Of The Atlas endgame expansion. I'm excited to see what Grinding Gear reveal next

While unable to give a firm release date, Grinding Gear Games hope to release Path of Exile 2 sometime around late 2020. Both games remain free-to-play, supported by sales of character skins and cross-character storage tabs.

Disclosure: Grinding Gear Games paid for my travel and board for the trip.