If you click on a link and make a purchase we may receive a small commission. Read our editorial policy.
Developer: David Wehle
Publisher: David Wehle

There is a fine line a lot of introspective indie games are walking, between a careful exploration of memories and events, and solipsism. For me, The First Tree leaps over that line with a clumsily implemented, wildly incongruous double-jump. Sanctimonious from the opening moments, this is a mediocre third-person exploration game made nauseating by the most self-obsessed narration I've ever encountered. It makes Dear Esther look like Tolstoy.

The First Tree is about death. Most prominently, the death of a man's father. I'm about to take a giant shit on a game that, for all I know, could well be a developer processing his own feelings about his losing his dad. You've been warned.

In this game you play as a fox, because - er - it's about a dream a man had? BUT WITH TEH FEELS. Within about 30 seconds of starting, and realising just how badly the fox moves (she steers like a boat, rather than say, a fox), you encounter a dead baby fox-cub lying on the grass. HAVE SOME FEELINGS NOW PLEASE.

From here on out you steer your boatfox toward 2D sparkly lights around the crudely rendered fields and hillsides, because there's nothing else to do. Dig up loose soil where giant columns of light stretch to the sky, and you'll trigger Captain Narcissism's next meandering memory of his younger years, of his most uninteresting teenage non-rebellions, and of vaguely fractious relationship issues with his father. All the while a simpering female voice oohs and ahh and agrees and soothes at this bilge as if it were the most riveting thing she'd ever heard. 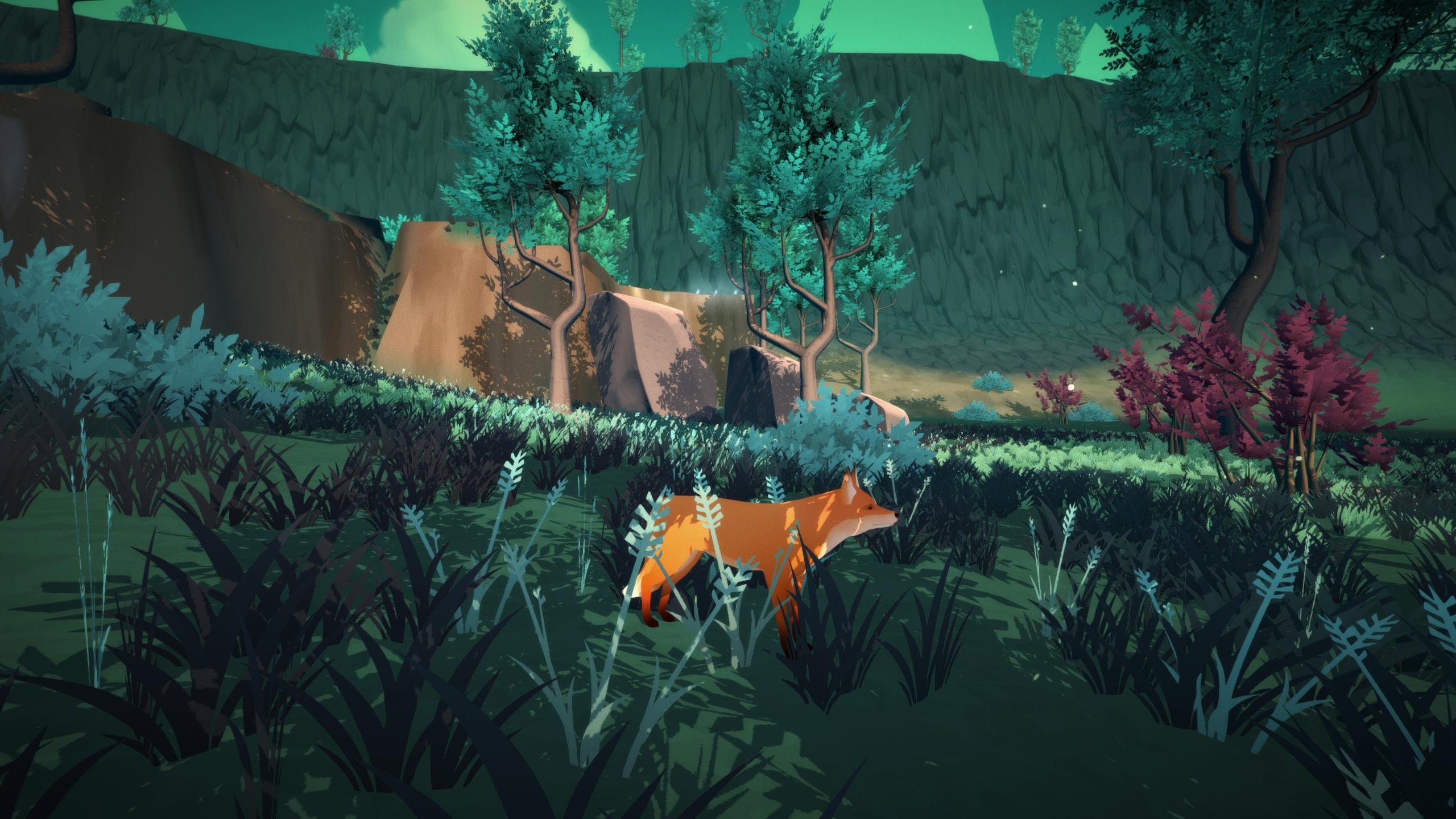 It's hard to interpret The First Tree as anything other than some weirdly specific self-indulgent fantasy where a guy gets to tell a girl his outstandingly boring dream, and for some reason she's enraptured by it, hanging on every sixthform poetry word. "It felt like I was soaring in the air with borrowed wings," he ponderously muses of driving his dad's car. And inexplicably she doesn't punch him nor get up and leave. Obsidian rocks, we're told at one point, looked like "sparklers pressed against a dark window". What?

I really cannot overstate just how much I loathed this writing. At one point the man is yet again whining about his blandly ordinary teenage years, where he did a couple of mildly naughty things, lamenting that he slightly disappointed his dad as if it were the most unique and special thing that had ever happened, when the lady-voice declares, "But if you hadn't had that fire in you, we'd never have met!" AAARRRGGGHHHHHH! Oh my GOODNESS. "You're absolutely right," he says, here and almost every time she speaks, ensuring that he alone is the arbiter of correctness in his World Of Me. "Maybe the destination is all that matters in the end." Oh fuck right off.

It just doesn't relent. At another point he regales us with the non-event of his pestering his dad over who left some litter in the woods, and his dad saying it was ghosts. So we're then told that he was so interesting as a person because he created this whole fantasy surrounding it, and he'd scare his less fascinating friends with these ghost stories. But amazingly, so utterly fascinatingly, he personally wasn't scared by the made up stories he made up. Because, "Hey, I was a weird kid." It's the sadface equivalent of a man shrieking, "I'M MAD, ME!" at a party until everyone else leaves. 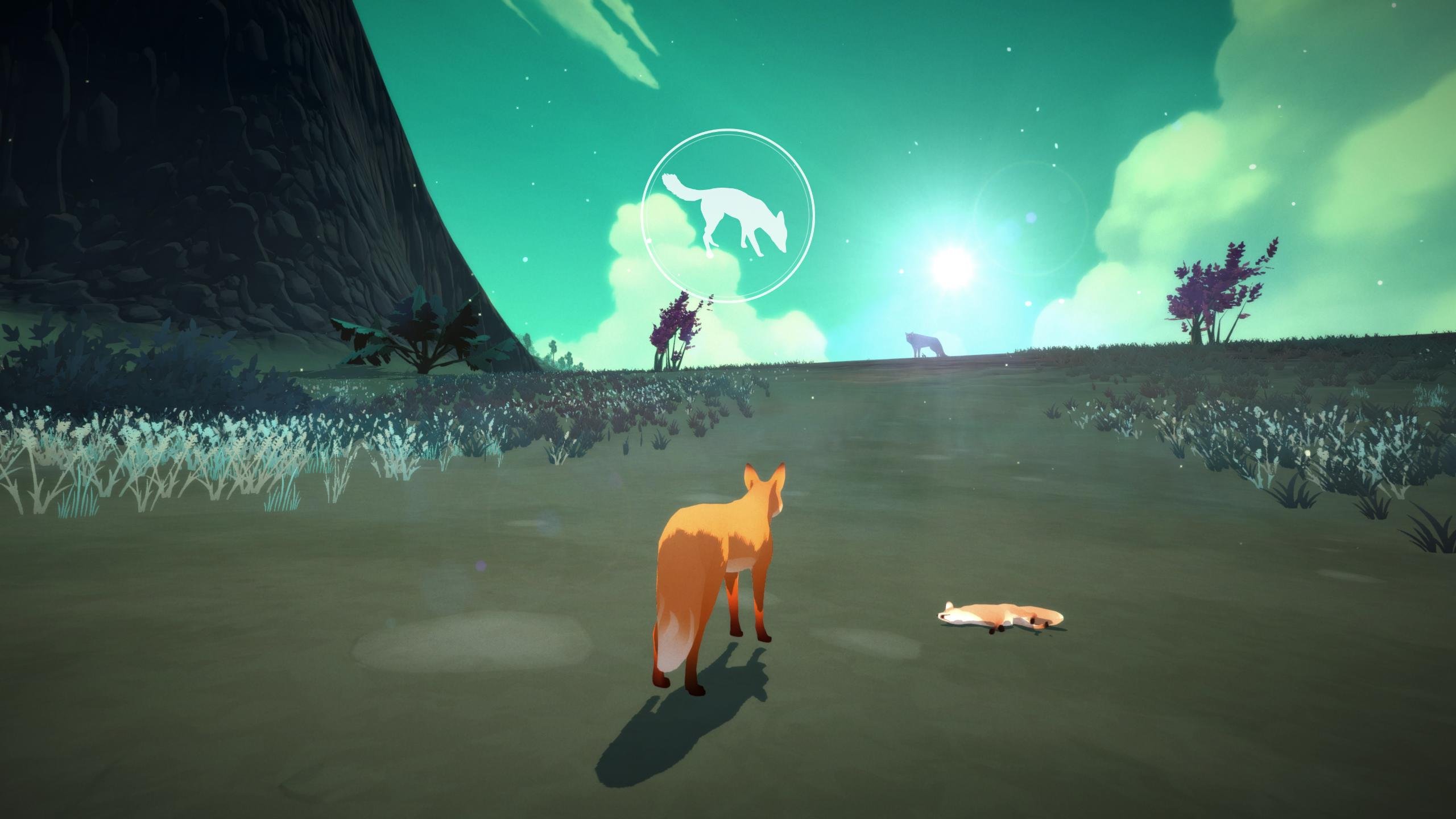 The game that's underneath it all is barely anything. You collect the sparkles for want of anything else to do, for ultimately no reason at all, and dig up memories best left buried, occasionally using the ungainly double-jump to reach some higher up rocks. And nothing else. It's a skeleton of a game, a half-finished prototype, that exists purely as a canvas for the story, as if hearing this man's egotistical mediocrity is so utterly important that what the player actually gets to do barely matters.

So you drag the fox through generic landscapes, bumping off the invisible walls for lack of any direction, and incongruously double-jumping to climb up some rocks. I've half-jokingly argued before that all games could be improved by a double-jump. This comprehensively proves me wrong. It feels like it was implemented because it was easier than making the pathways work for a regular jump. The game's mechanics don't have any reason to be played, other than to press 'play' on the next sound file. 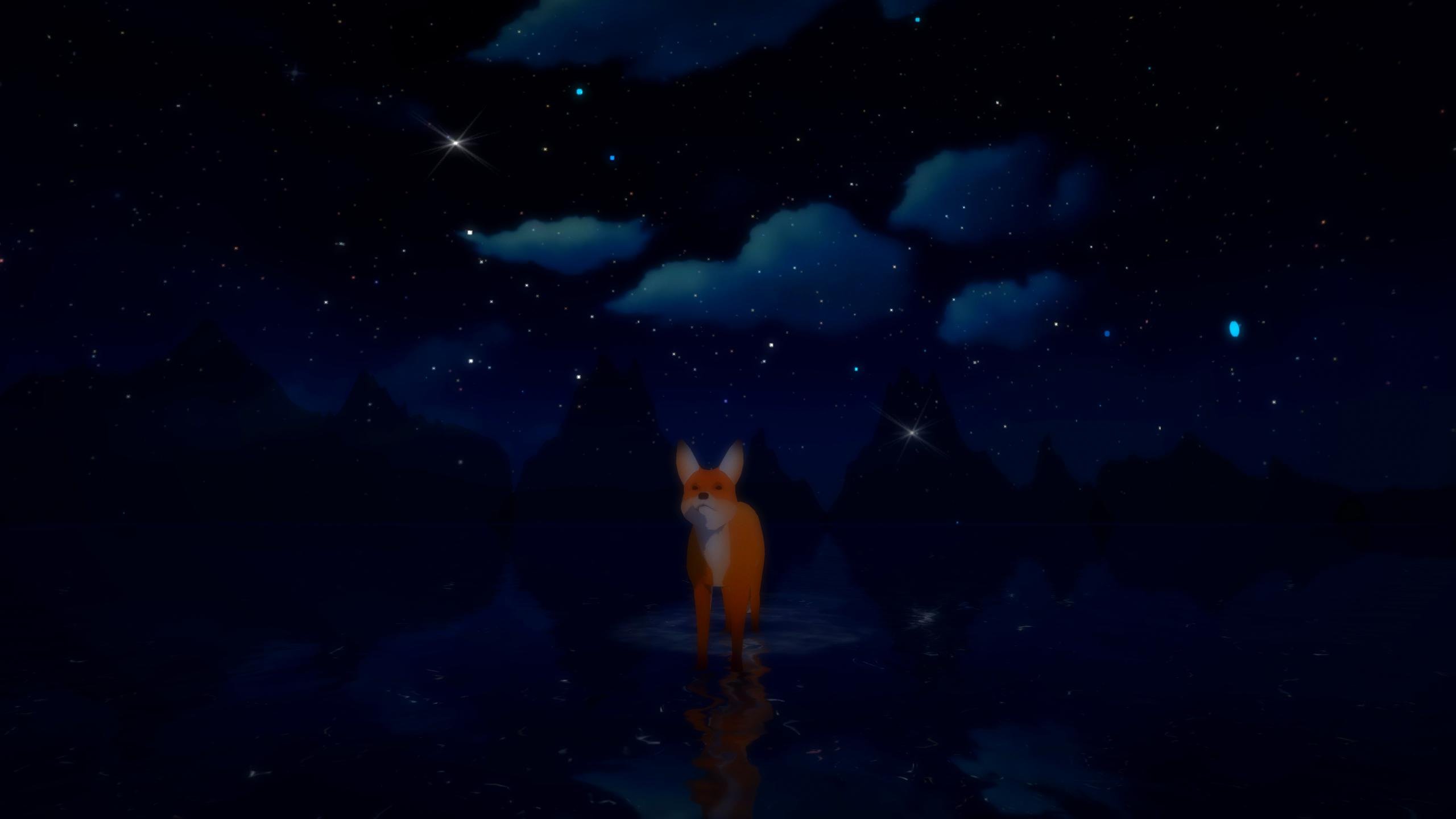 And I get it! It was the third anniversary of my dad's death last week. It really sucks when your dad dies. Shock news. And hey, look at me, the big man kicking the game about the guy's grief. But seriously, wow, no. If this really were a game exploring the complexity of grief following the death of a parent, then I'd be the target audience. But it's a game about a man telling a woman how difficult and important his achingly ordinary life is while she coos and agrees.

I did, of course, wonder if this was the point. If this was an exploration of one man's self-obsession, while for some reason also moving a fox around. Toward the end the lady finally is allowed to speak for a bit, and tells of a genuinely tragic childhood, horribly giving it equivalence to his mundane recollections of being a bit sniffy when he was 15. And I thought, "Oh, now he'll realise! He'll get a grip and apologise!" No. There's nothing, no self-awareness, and he carries on telling her his blitheringly dull dream. 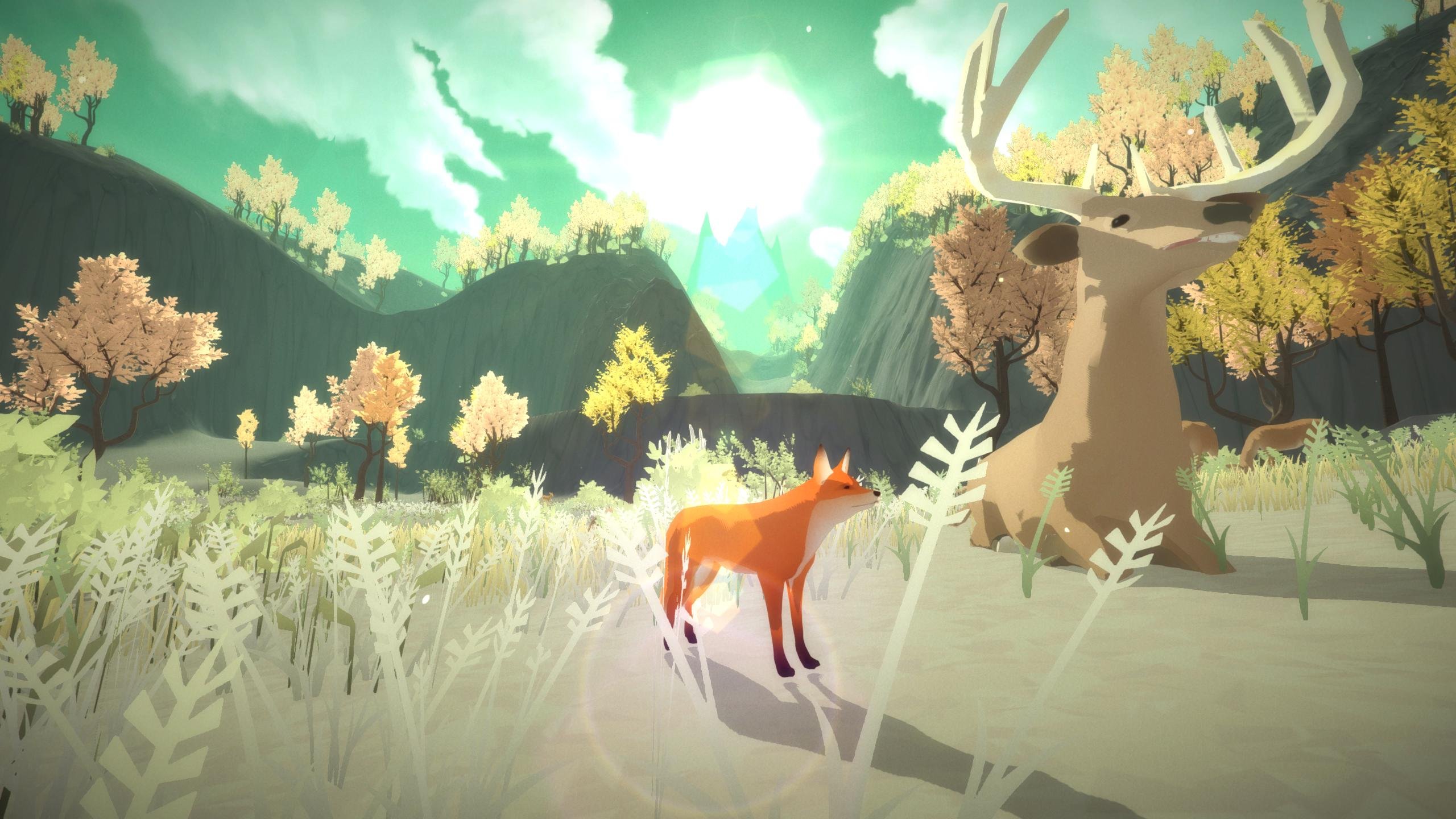 By the time it was over, after its bizarro switch to first-person, I was still entirely clueless what this maudlin bathetic story of a mummy fox, aimlessly wandering between invisible walls to blankly stare at dead fox cubs, had to do with someone being sad their dad had died. But I had shouted, "OH FUCK OFF" at the monitor a sizeable number of times.

And it's not like I'm writing this without knowing others have, for reasons I genuinely cannot fathom, loved this. So maybe you will love it too? But bloody hell. It felt to me like an exercise in narcissism and emotional manipulation. Dead baby foxes are sad so, er, feel sad about other stuff too? No. That's not how emotions work. It's actually, I'd argue, grimly dishonest in how it attempts to force pathos in the player as this moany man moans while showing you pictures of dead cute baby animals. That's gross.

And sure, yes, no matter how blandly ordinary our childhoods might have been (and goodness knows mine was) we all come away from the loss of a parent with regrets, of unspoken words, of unresolved histories. I'd love to have played a game that tried to explore that rocky landscape, with some nuance, some introspection, and most of all, with some humility. This is not that game.