Need to paralyse an international airport, drop hand grenades on infidels, or shoot a spectacular intro sequence for a puffin documentary? You, Sir/Madam, require a drone and drone operator. In preparation for the day when the majority of jobs in the UK involve quadcopters, I've spent the past week learning how to manoeuvre faithful digital facsimiles of these agile aerial peeping Thomases. Thanks to a selection of relatively cheap and free PC sims, I am now - in my own mind at least - Dr. Drone... The Dronemaster... Stone the Drone. 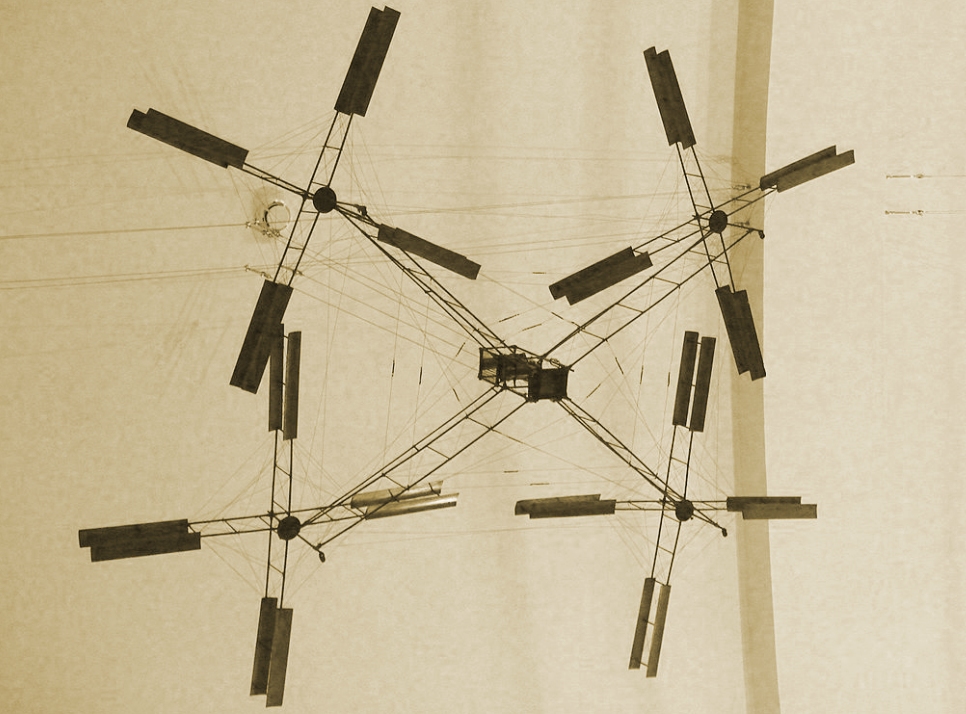 Quadcopters go back a long way. Renaissance clever-clogs Leonardo da Vinci almost certainly would have invented them if he hadn't been otherwise engaged inventing the crossbow, the cross-your-heart bra and the courgette. The very first manned helicopter flight – a brief, wobbly 0.6m levitation – occurred in 1907 and involved a tethered four-rotor gyroplane designed by the Breguet brothers, Louis and Jaques.

During the next half century, several other designers attracted by the idea of torque-less* VTOL aviation, created quadrilateral flying machines with spinning air churners on each corner. However, it wasn't until the advent of tiny lightning-fast computers and sensors that the stability issues that plagued early quadcopters were overcome. The unmanned camera-equipped whirlybirds that throng modern skies owe their dexterity, grace, and biddability to on-board processors that speedily convert controller inputs into motion and orientation-sensitive rotor instructions.

*Because two of their rotors rotate clockwise and two counter-clockwise, quadcopters have no need of torque-counteracting tail rotors.

The drone-curious interested in using their PCs as economical quadcopter instructors and temperate danger-free aerial playgrounds don't need much in the way of specialist peripherals to get started (a bog-standard dual-stick gamepad is a pretty good substitute for a standard RC transmitter). However, choosing a drone sim may prove tricky as there's a veritable swarm of the things competing for custom. In addition to the five dedicated drone titles I've sampled this week, there's also a range of less fixated RC sims – titles like Aerofly RC, RealFlight and RC Simulation – that will happily host quadcopter flights if asked to. 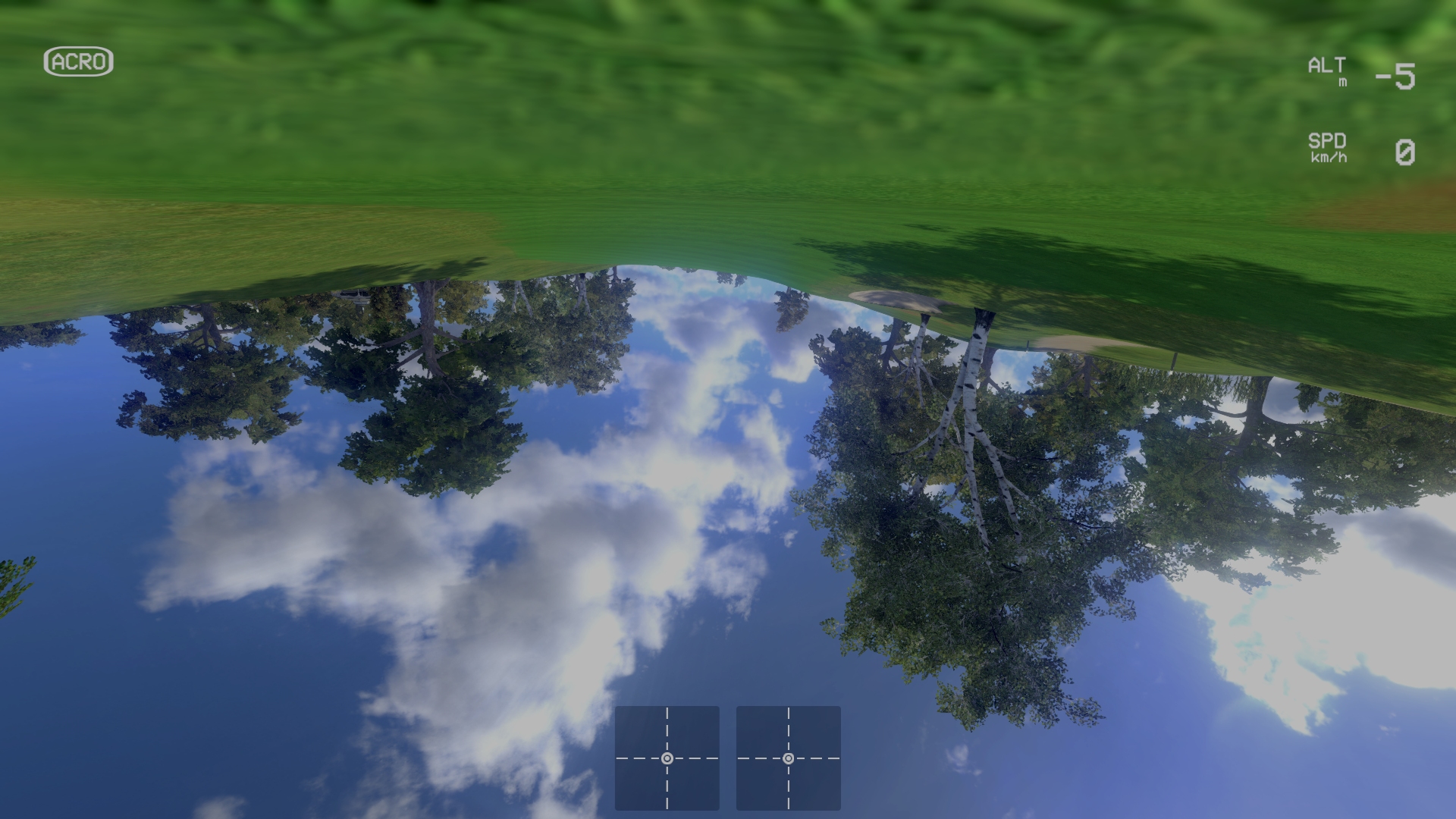 Most real quadcopters can be flown in various modes. The standard ones function a little like difficulty settings and are usually reproduced in drone sims. In beginner-friendly 'angle' mode, your hoverer automatically levels after pitch and roll inputs, and refuses to somersault. 'Horizon' is tad more liberal, permitting tumbling but, like 'angle', restoring equilibrium after sticks are centred. Switch to 'acro' (acrobatic) and all handholding ceases - it's up to you and you alone to ensure up is up and down is down. 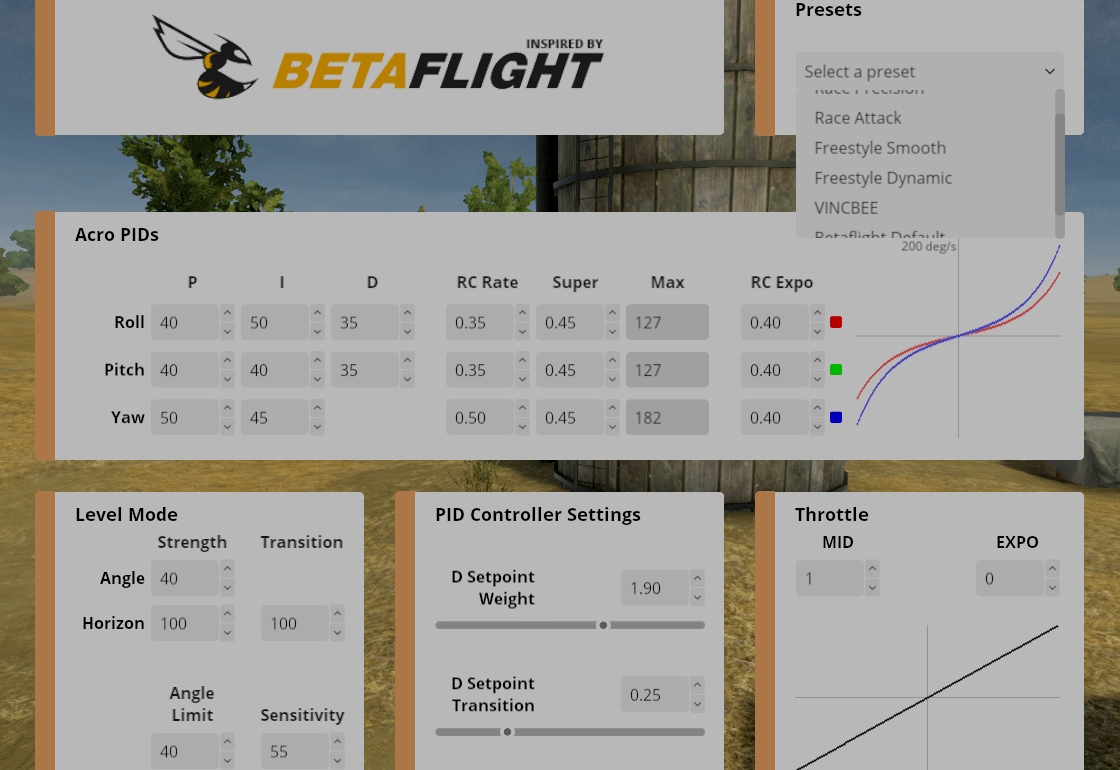 Coming to drone sims with very little experience of the prototypes and decades of conventional flight simming behind me, one of the things that I found most difficult initially was controller setup. Anyone accustomed to flying weightier steeds using much bulkier/longer controllers, is likely to spend most of their first hour struggling to reduce thumbstick sensitivity on options screens that make precious few concessions to the uninitiated. What the deuce is a PID? What happens if I lower/raise Yaw P? Do I need more or less EXPO on my throttle? With the exception of FPV Freerider and DRL Simulator which both offer beginner-geared 'low sensitivity' presets, most of the genre pillars simply emulate real drone firmware configurator screens. Until I discovered that drastically reduced 'RC Rates' made for much more obedient and pointable drones, I struggled. 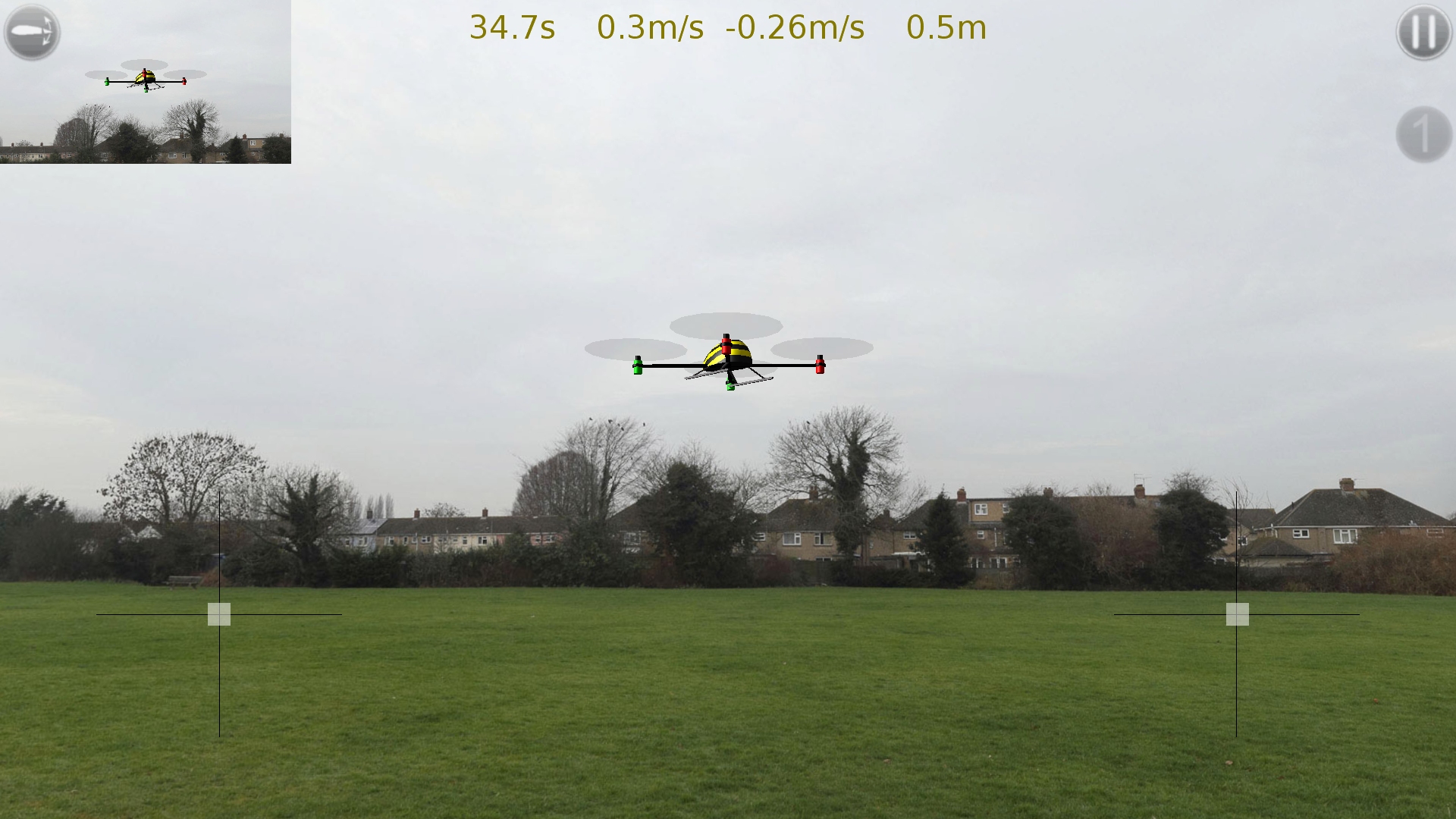 One of the cheapest and quickest ways to dip your toe into the genre is via PicaSim. The 65 MB freebie's raison d'être is traditional RC aircraft, but amongst its 46 miniature aerodynes is a single quad, the Wasp. Flying this in atmospheric 'panoramic' venues like the recreation ground pictured above, you can't use First Person View - the easiest and most exhilarating way to pilot both real and virtual drones. As the alternative 'true 3D' environments provided, are often designed for glider slope soaring, they tend to be on the barren side and consequently aren't particularly interesting from a 'free flight' perspective. 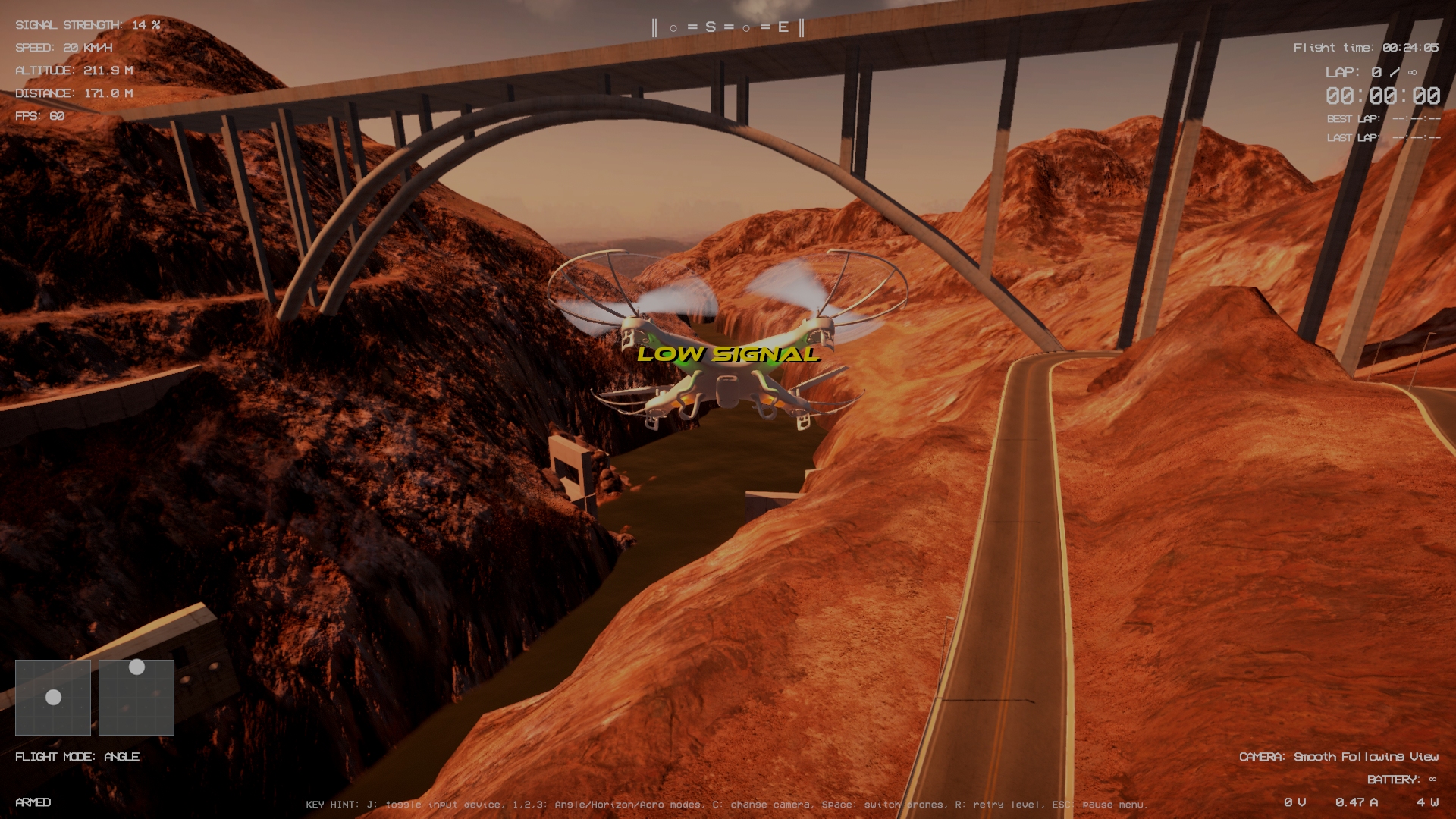 Another gratis option is the Real Drone Simulator alpha. Hailing from Hungary, RDS appears to have been abandoned which is sad because, unlike the majority of drone sims, this was a project not totally obsessed with racing. Missions involving filming, photography and reconnaissance were planned. The download comes with two branded drones, three sceneries (the pick of which is an impressive 5km x 5km Grand Canyon-inspired caper-space) and essentially sound flight dynamics.

FPV Freerider makes up for what it lacks in vehicular variety and venue vastness, with pep, plausible physics and a budget pricetag. For $5/£5 you get six pocket-handkerchief venues, a random course generator and a single quad. Although I found most of the sceneries a bit cramped and spartan, it's not difficult to kill a 30-minute teabreak tearing about the game's densely wooded island or moody multi-storey car park. 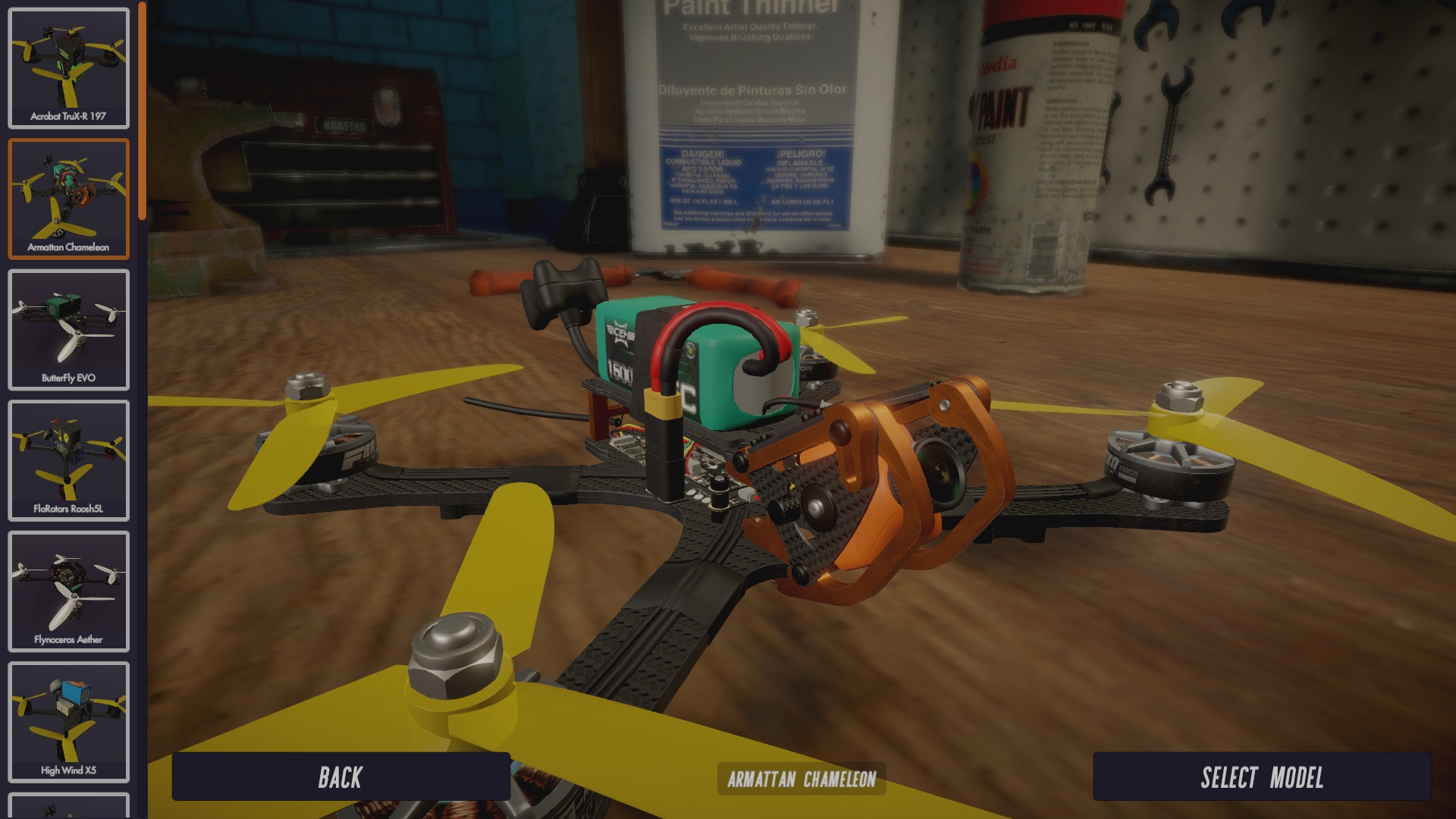 Three much more substantial and malleable sims hover around the £15 price-point, Liftoff...

and The Drone Racing League Simulator... 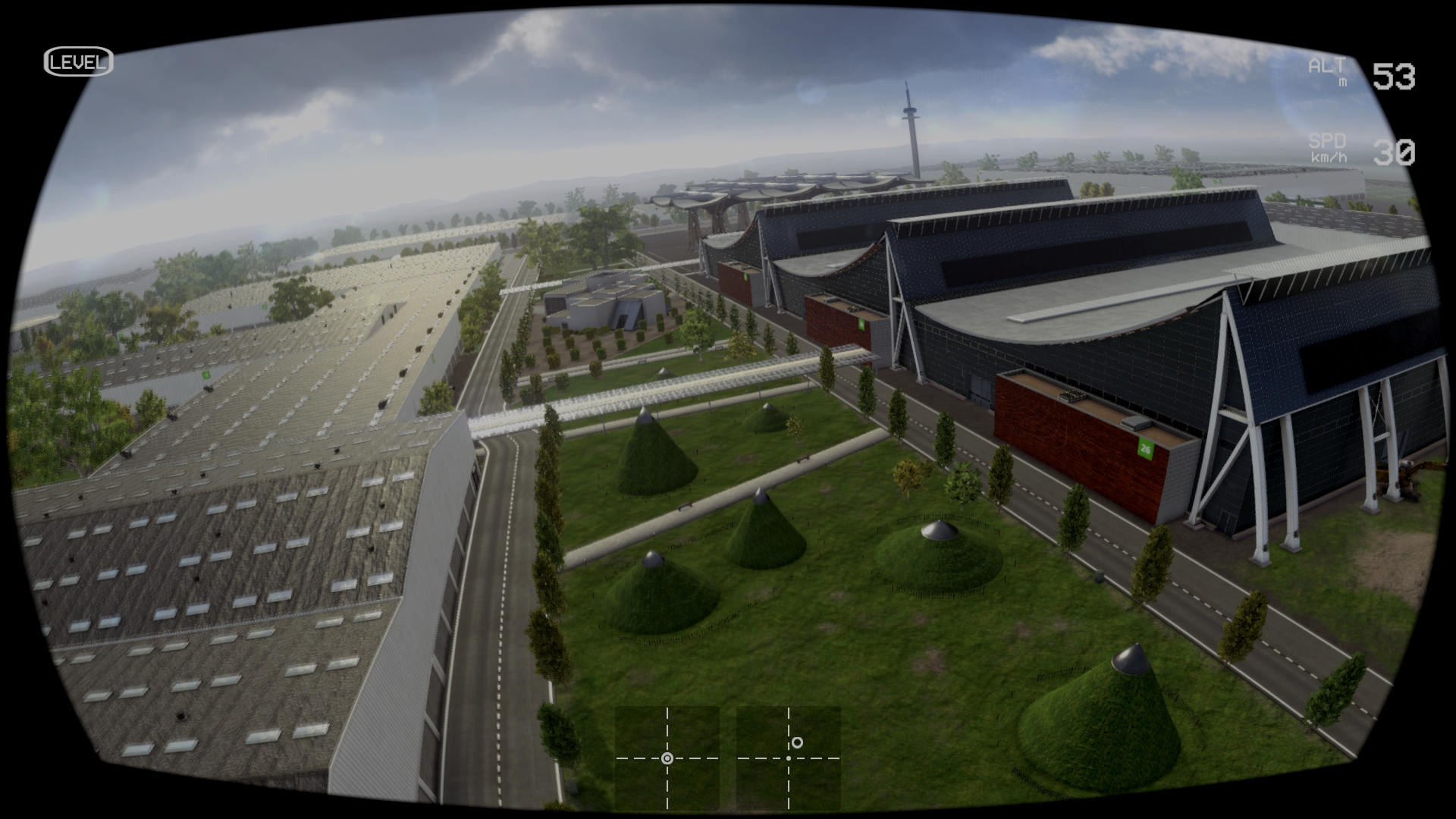 Partly for prosaic practical reasons (the miserly VelociDrone demo snubs my gamepad's yaw stick for some reason so, assuming the full version would too, I've not properly investigated this highly regarded* title yet) and partly for subtle sensory ones (DRL Simulator's air feels a mite gelatinous to me) I've found myself spending more time in Liftoff than the others. 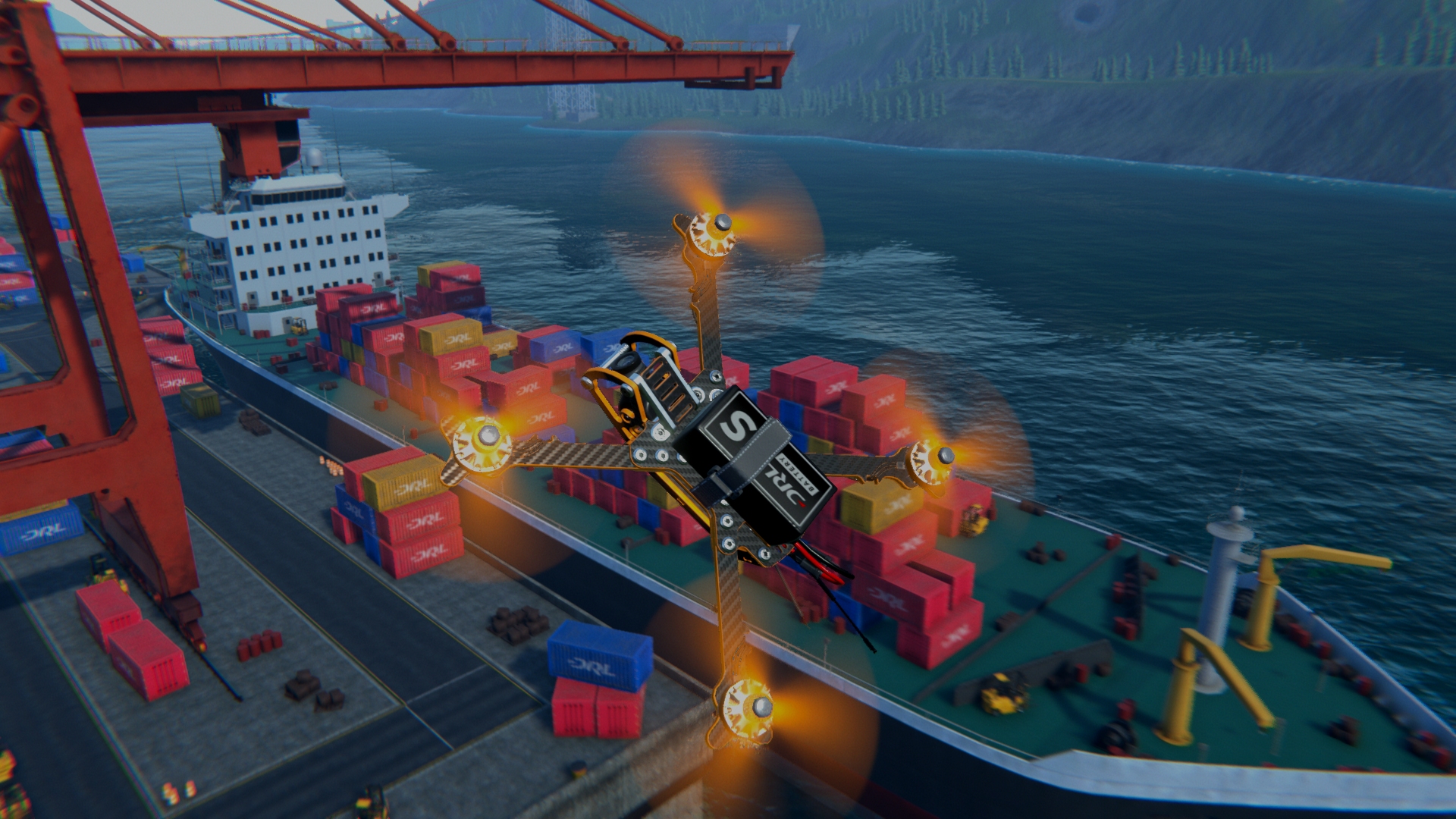 As impressed as I was by DRL's spacious dockside and aviation boneyard environments - arguably the most imaginative/attractive aerobatic arenas the genre has to offer - there's something about Liftoff's flight modelling – a touch of bob... a soft-edged slipperiness – that I particularly like and haven't found elsewhere. This liveliness keeps me coming back, and ensures even the simplest of the sim's fourteen sceneries have the power to absorb me for hours on end. 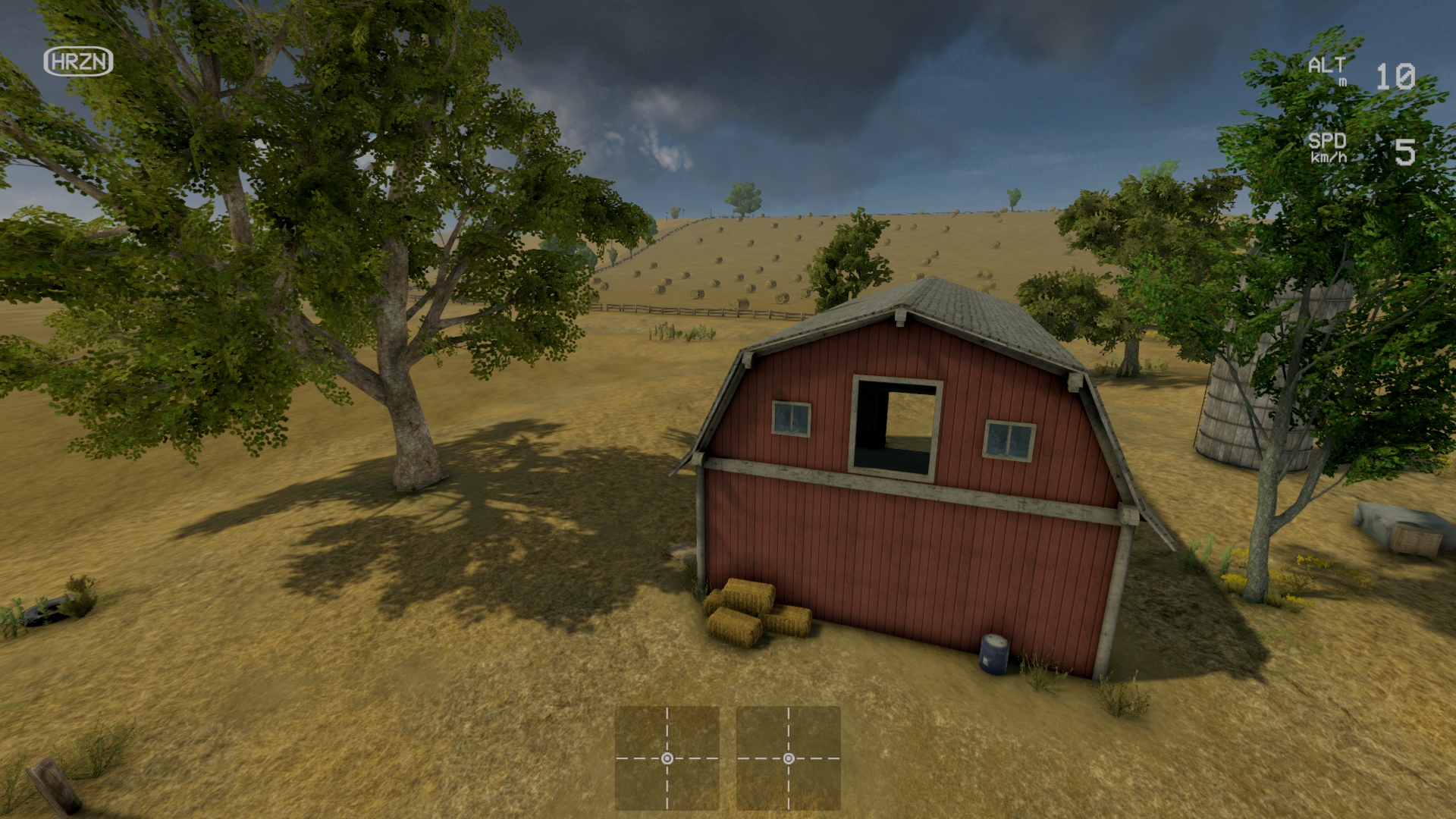 During the early stages of my drone education I dashed in, out, through, and round this unremarkable Liftoff barn hundreds of times. Pleased to discover I couldn't rely wholly on old skill sets (quadcopters might be related to helicopters but their refusal to weathercock means carefully coordinated turns are far more important) I felt like a wide-eyed flight sim novice again. If years of lazily bimbling about in traditional sim aircraft have left you a little jaded, learning to sky-dance a sim drone could be the perfect tonic. 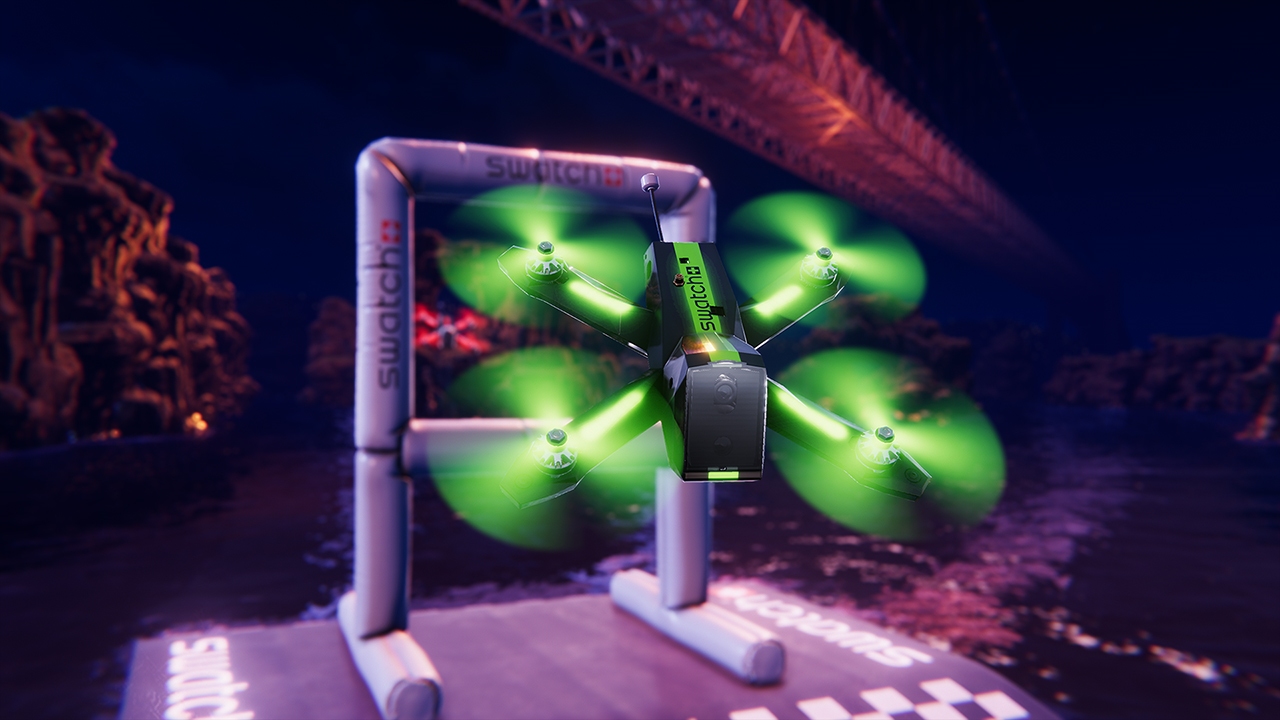 Although gratified and a little surprised by my relatively swift progress from bumbling barn molester to graceful-ish barn swallow impersonator, I'm old and self-aware enough to know that I'll never have what it takes to be competitive in the world of drone sim racing. The unusual closeness between the esport and its inspiration is illustrated by the fact that there are now two different drone sims offering opportunities to cross the divide. 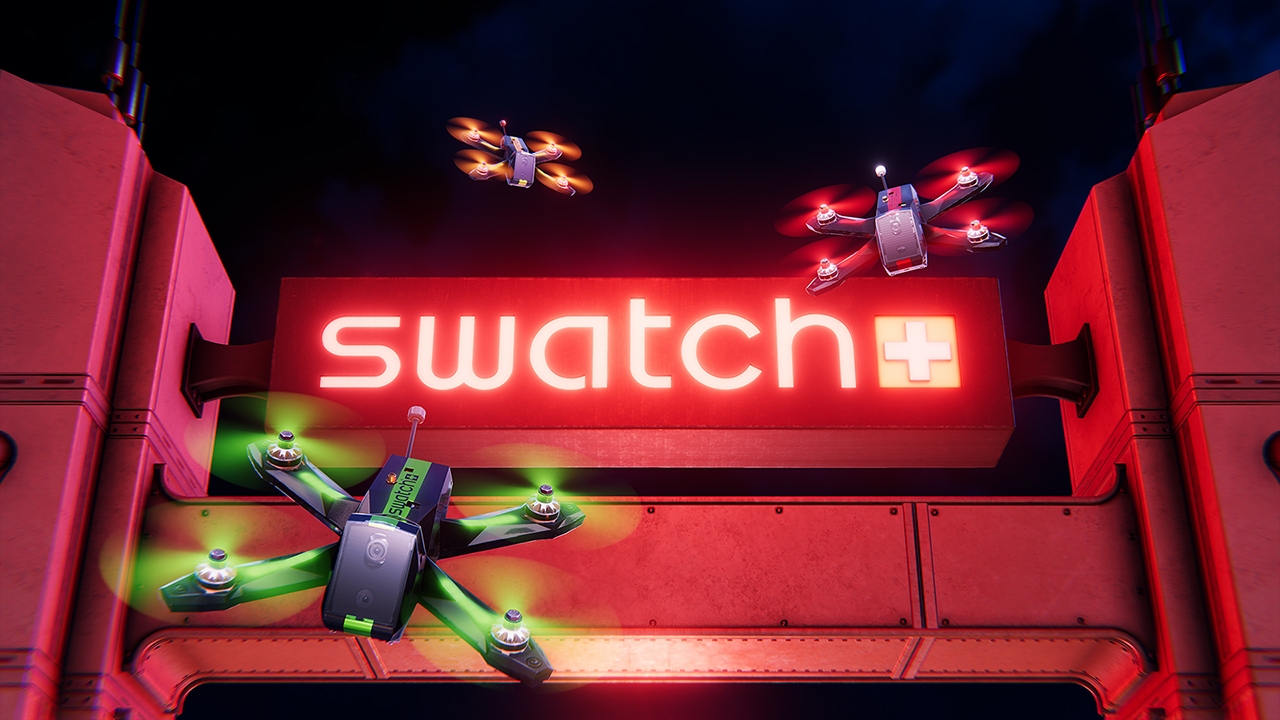 One exceptionally zippy DRL Simulator pilot may end the year piloting real drones for a team in the actual DRL (Drone Racing League), and, thanks to the genre's latest entrant, next year's DCL (Drone Champions League) line-up is also likely to include the odd desktop dronaut. 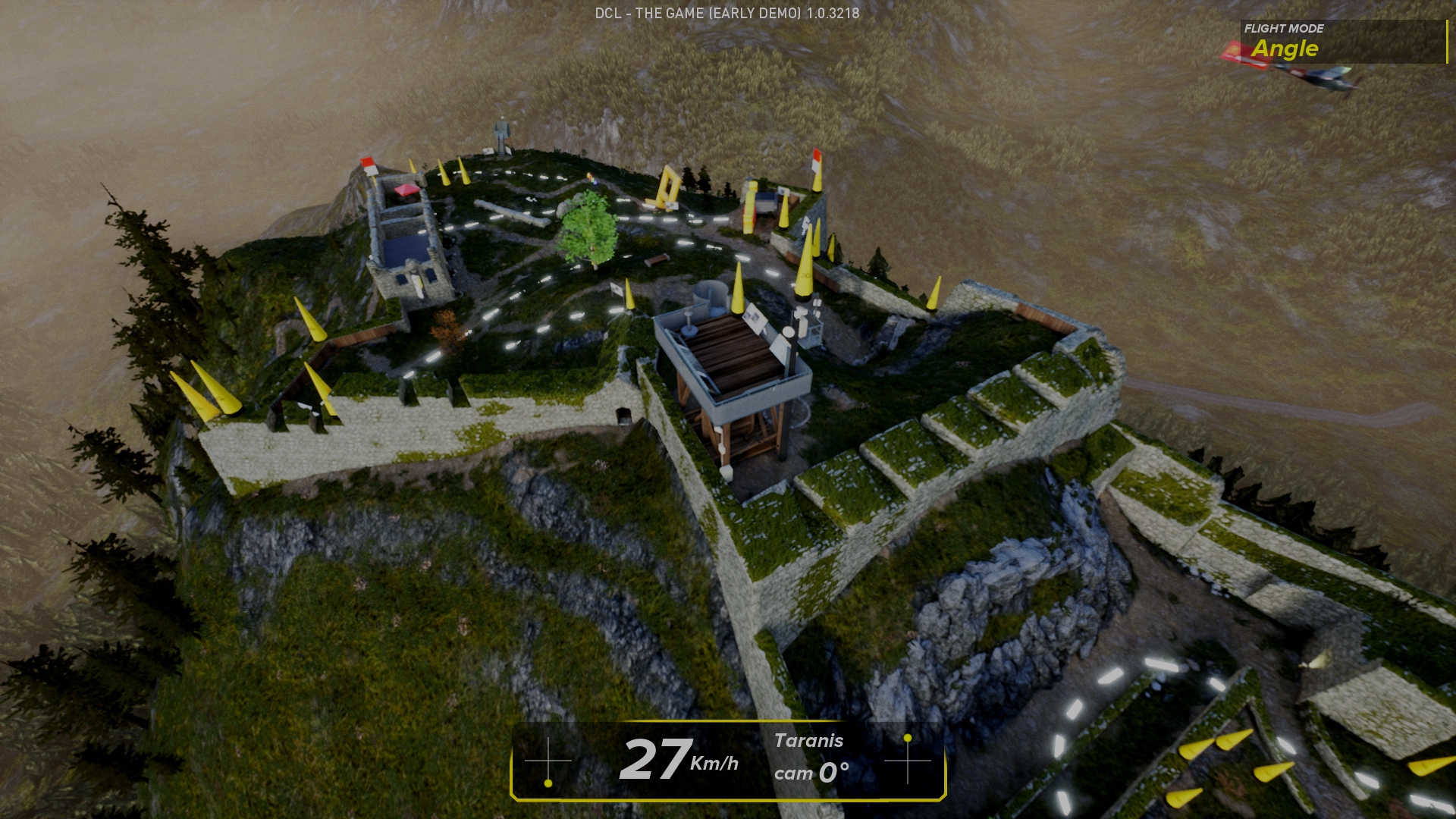 Only available in 'early demo' form at present (the trial is all you need to qualify for the try-outs) DCL - The Game: FPV Drone Racing uses Unreal Engine 4 to recreate two rather spectacular/vertiginous venues in the Alps. Fingers-crossed the release version comes with 'locate the missing hiker/skier' and 'film the griffon vultures' story missions.