I never tire of the view from my office window. The patchwork of fields and spinneys draped haphazardly over rolling chalk downland. The dusty willows and alders cooling their heels in the canal. The triffids milling in the pasture. The uniformed children marching another captive down the footpath to Brackley Manor. Escapism? It has its uses, but more often than not I hanker for games that echo and exalt, emphasise and explain. Games like Narrowboat Simulator. 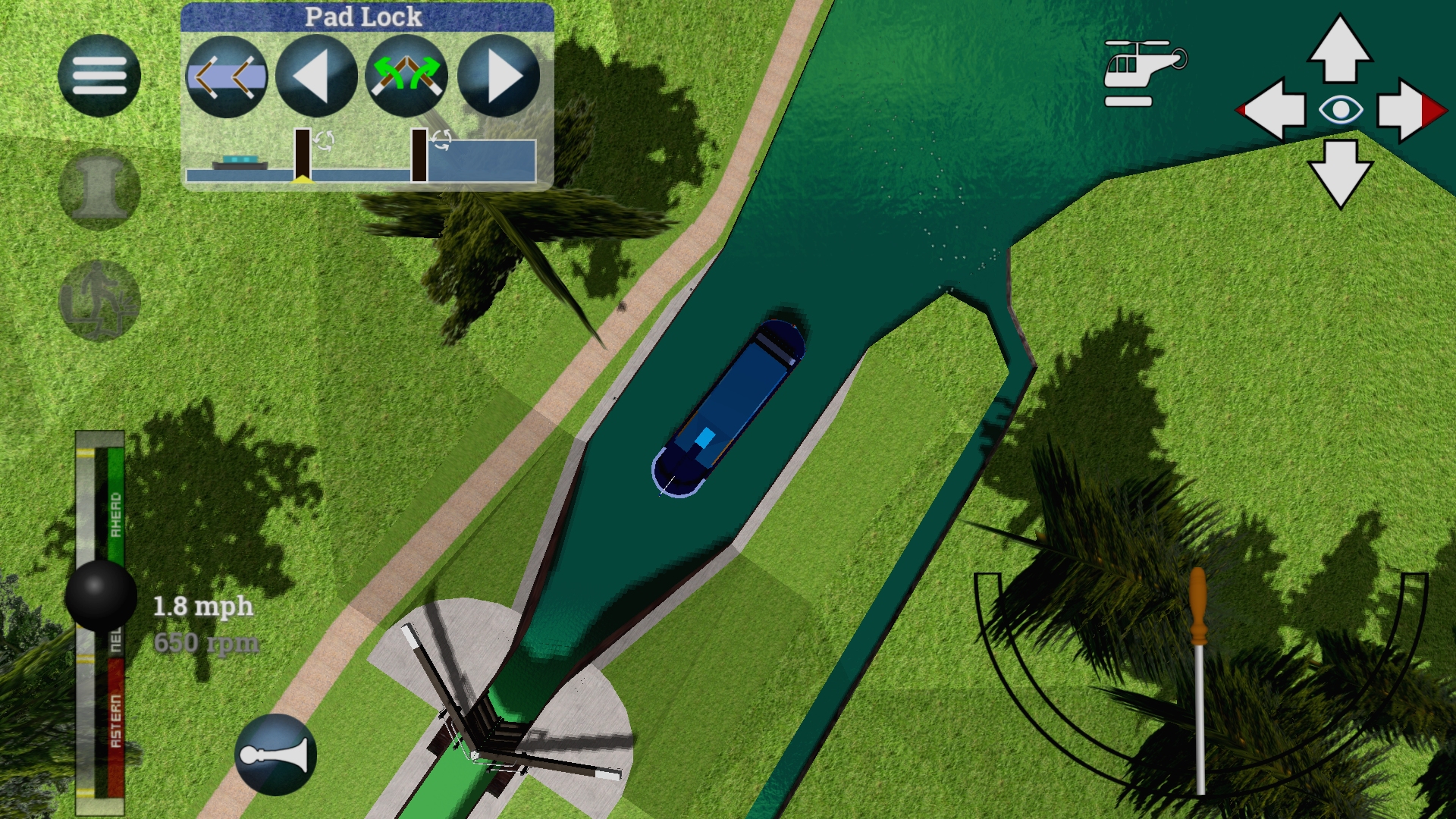 I wonder if Michael Donning, the codewright/locksmith behind Narrowboat Simulator, has ever played Truck Simulator. I wonder if he's ever contemplated combining virtual canals with virtual commerce. Inspired by contemporary recreational narrowboating in the UK, the free, Godot-engined NS is already surprisingly strong. One can only imagine the allure if the project was set in, say, the 19th Century and there were ETS2-style inducements to roam Britain's inland waterways. 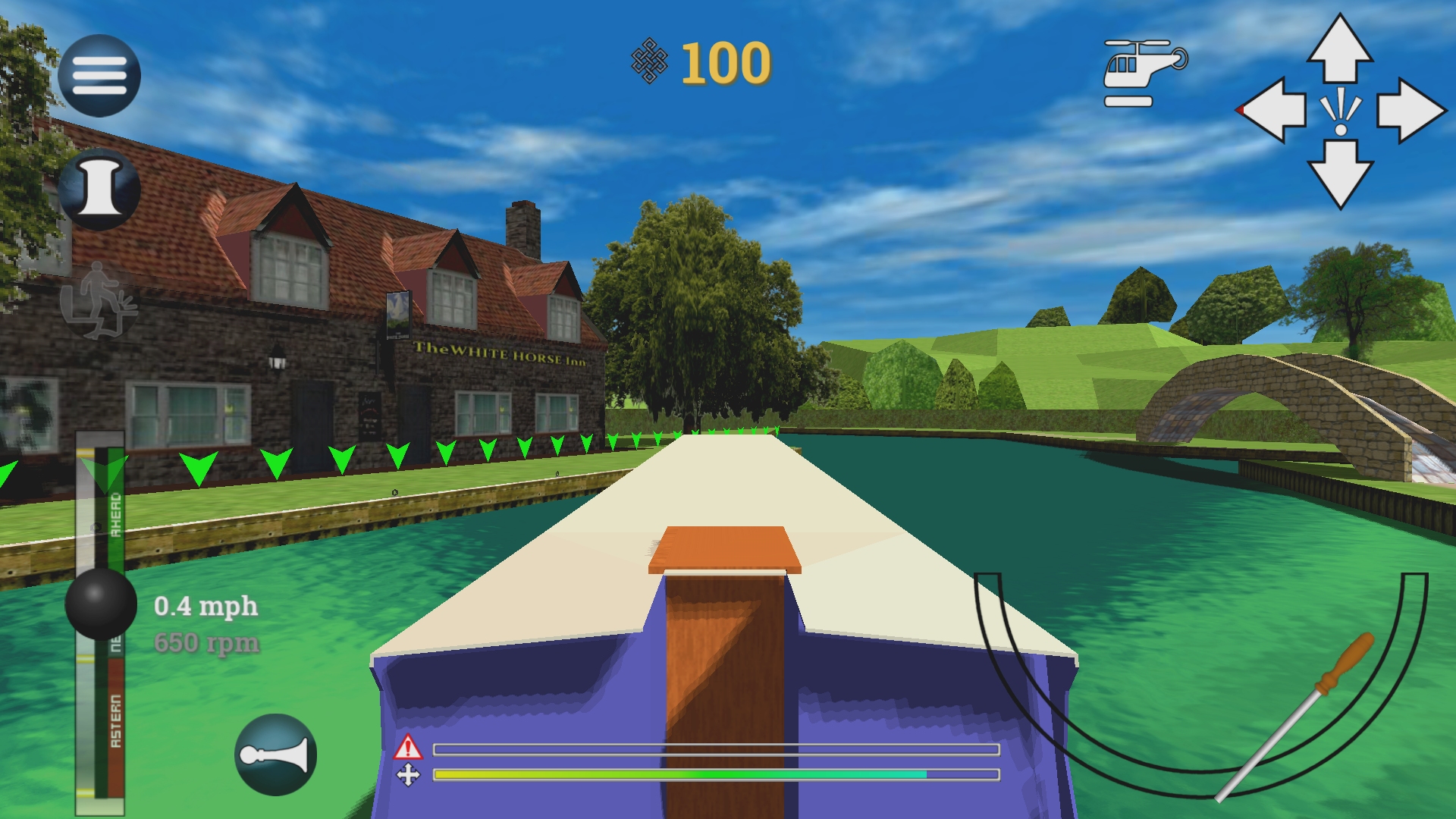 Of course, NS would need a more extensive canal network and, ideally, some AI traffic and prettier visuals to fully profit from any added business elements. Right now the graphics are cruder than Chaucer's miller, things like ripples and reflections, ducks and dragonflies being wholly dependent on the power of your CPU (Cranial Photoshopping Unit). You put up with the barren towpaths and cruciform trees because Michael's love for and interest in narrowboating declares itself every time you push the tiller or slide your craft into a lock's dank canyon. 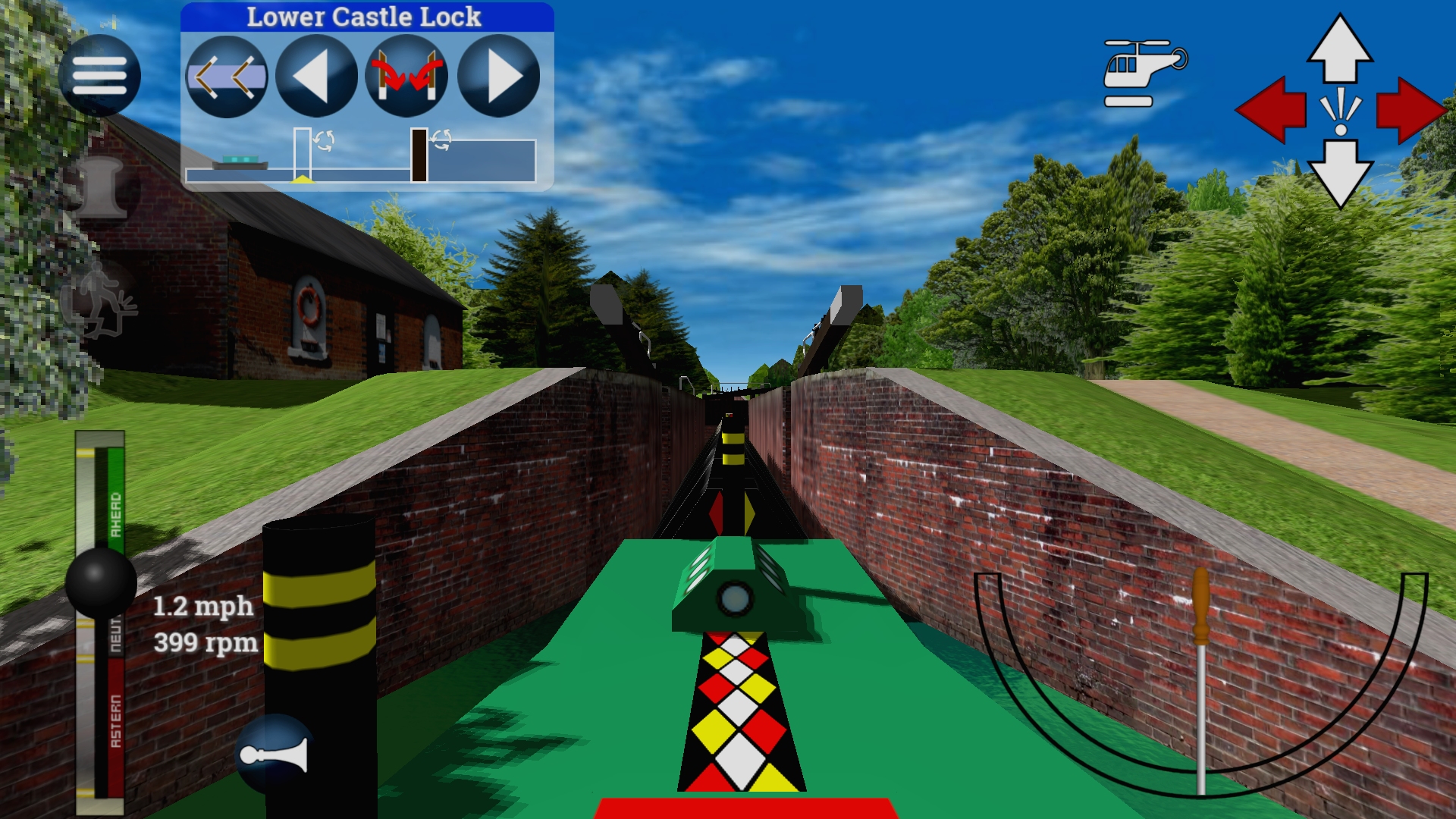 Coming from a chap whose entire experience of inland skippering consists of a few hours at the wheel/tiller of hire boats on the Kennet and Avon, and Thames, this probably doesn't mean a great deal, but I think NS captures the unique challenges of handling elongated rivercraft rather well. Although the four included vessels all handle very differently, none turn crisply or tightly. Berthing in the Drifting Badger Marina, turning in winding holes, and entering locks, all require delicacy and forethought, especially as rudders are almost totally ineffective when reversing. 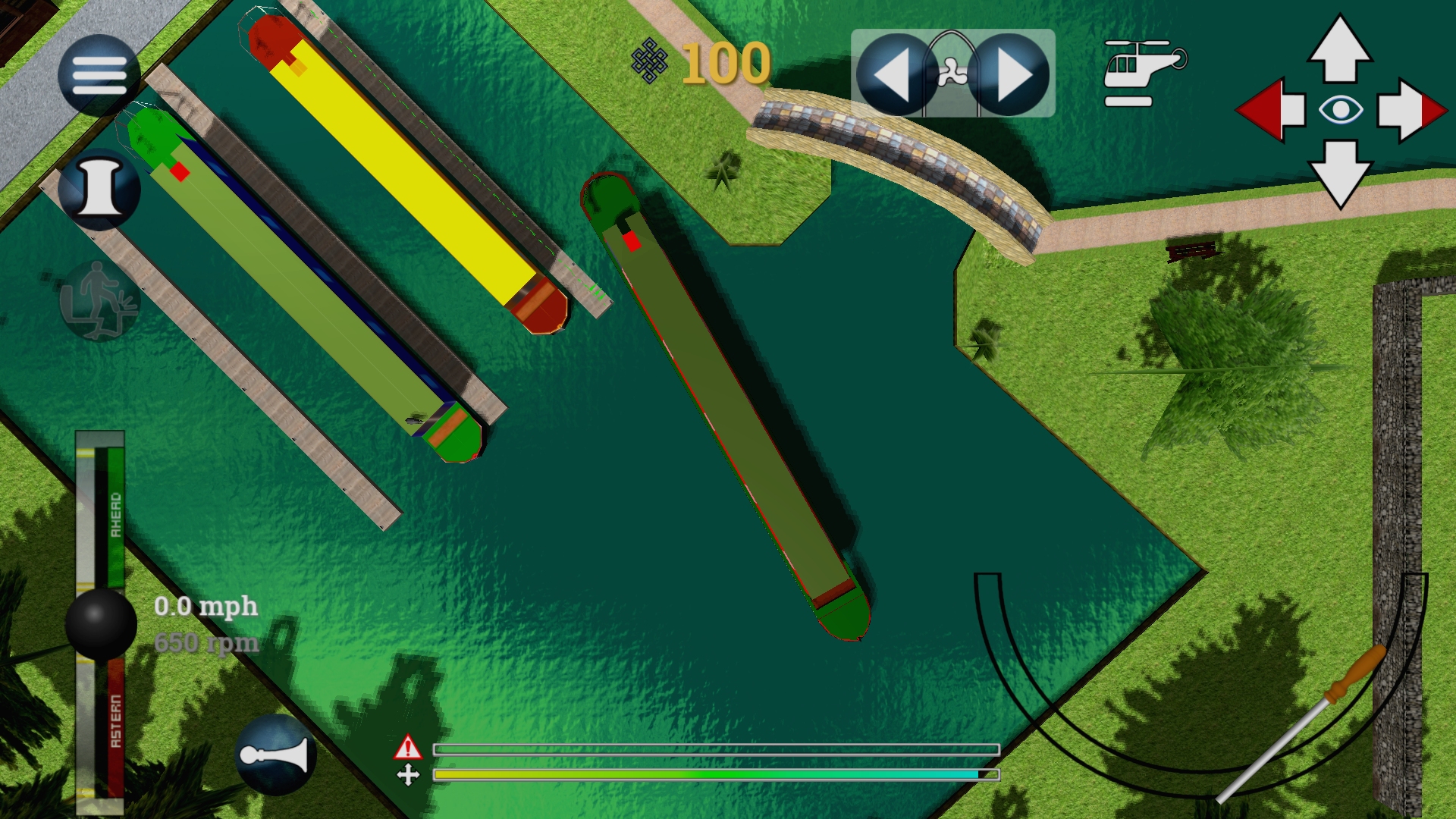 The prow of the diminutive Kingfisher has a plausible tendency to wander. Three-point-turning the wryly monikered Endless Joy is never simple, but is, thanks to bow thrusters, a darn sight easier than about-facing the handsome Otter, a preserved freight carrier with traditionally painted woodwork. 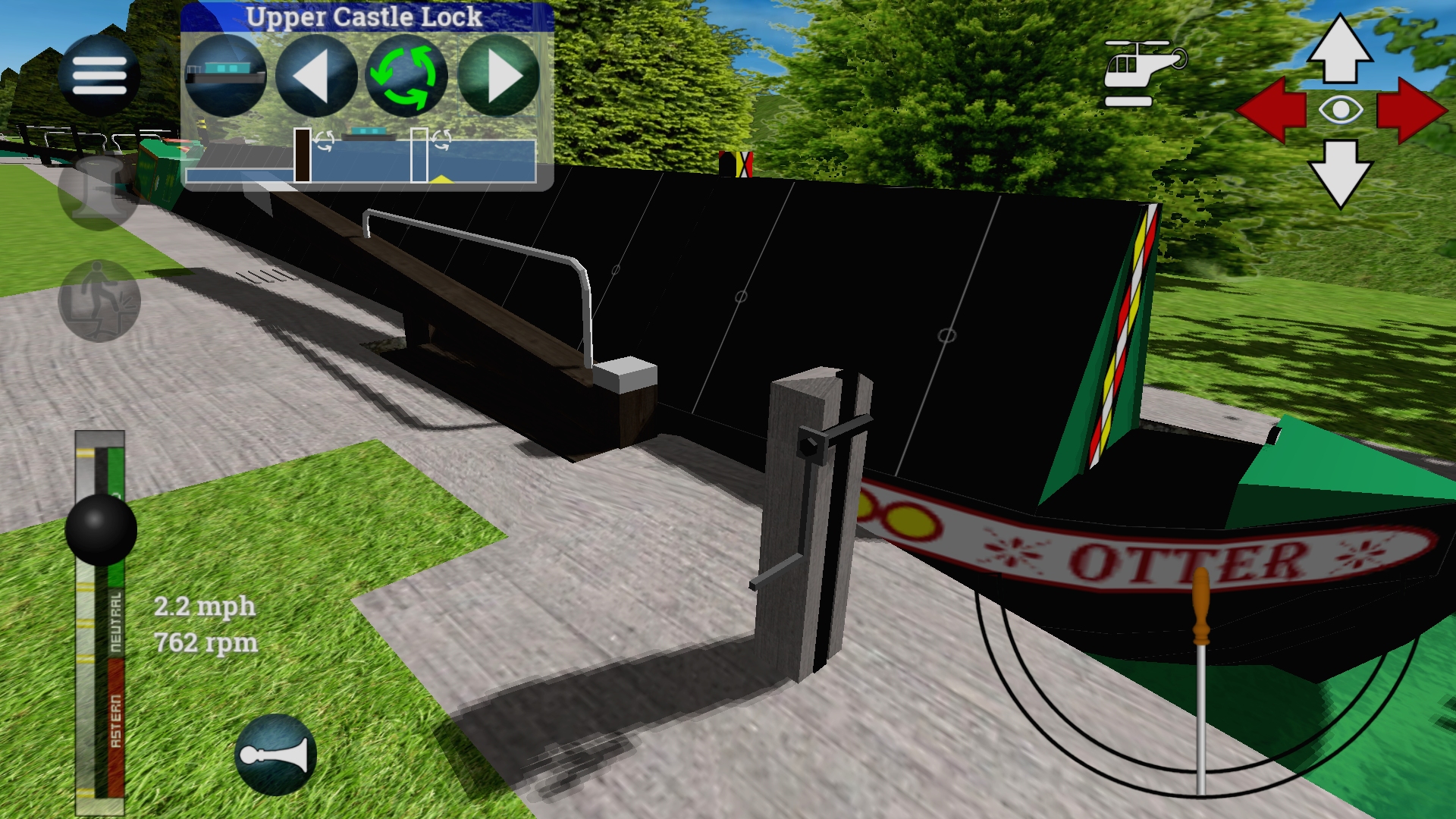 Michael's commitment to credible physics is particularly obvious when you're climbing a slope with the help of one of those engineering marvels known as locks. With gate paddles open, a little forward throttle is required to resist the pressure of the incoming flow. Worked via pop-up controls, locks come in several different forms and, despite filling and emptying a lot faster than their inspirations, operate essentially prototypically. Is it possible to accidentally drain a section of canal by failing to shut paddles as you progress? Probably not. But locks do feature cills that are perfectly capable of catching out the careless or ignorant. 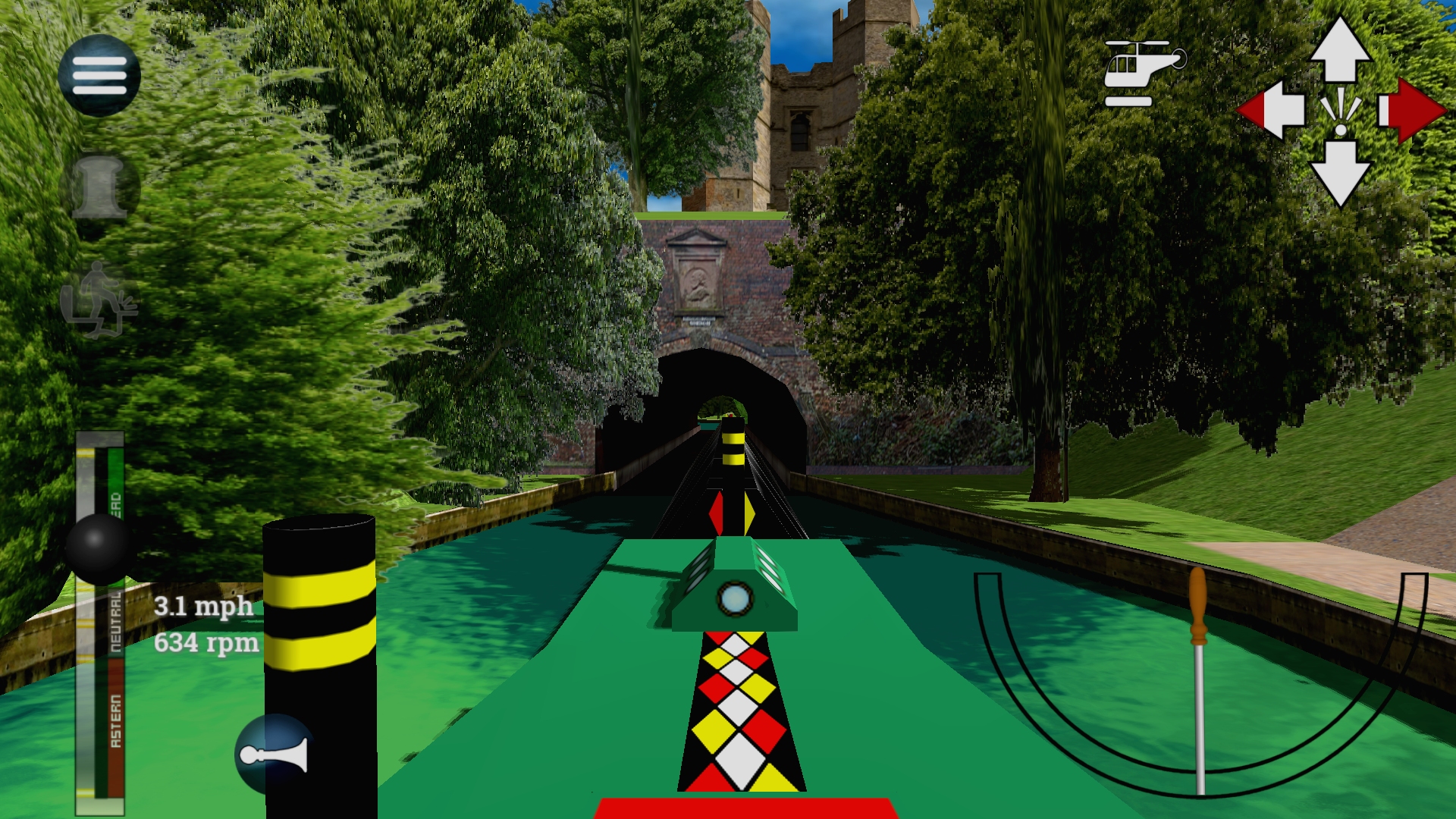 With its marina, aqueduct, winding hole, tunnel, waterside pub, and quartet of lovingly modelled locks, the fictional figure-of-eight map contains numerous challenges and does a decent job of evoking British canals. To earn the right to 'free roam' in any craft you'll need to complete seven tutorials-cum-missions without causing too much damage to boats or banks – not an onerous task. In the future Michael is hoping to enlarge the Drifting Badger map with new cuts, and add extra texture to the simulation by modelling forces like wind and waterway flow. Tantalisingly, his long-term plans include...

Whether Narrowboat Simulator eventually turns into the bustling historical logistics sim I've been quietly lobbying for since 2012, or ultimately moves in a more MSFS or Train Sim direction, I'll be watching its progress with great interest. The world of roses and castles desperately needed a PC love letter and though NS isn't quite that missive yet, it is an admirable first draft. 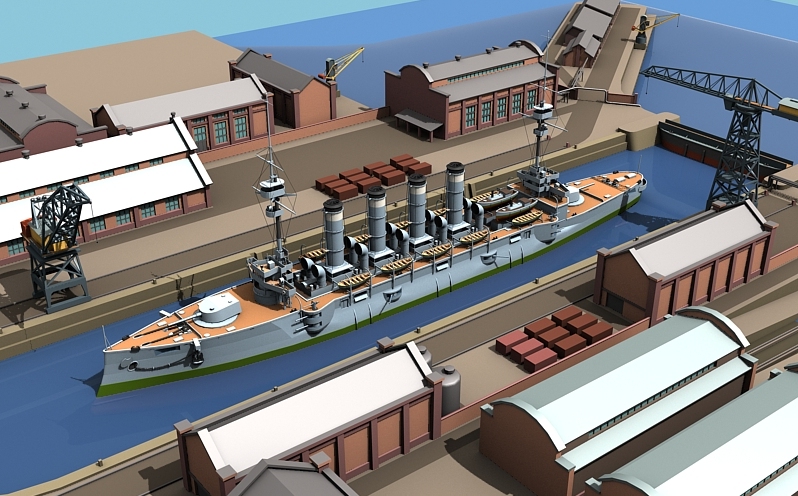 Like butterflies, traditional folk tunes, and ripe fruit overhanging the pavement, game concepts belong to no-one and everyone. Just because Fredrik Wallin has made a name for himself as the king of dual-layer-dreadnought-era-design-your-own-warships strategy games doesn't mean others can't have a bash. Others such as Game-Labs. 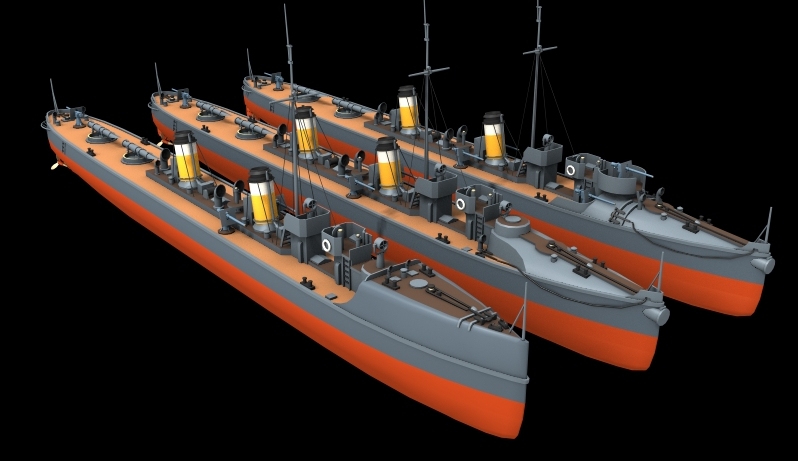 The people behind the light but likeable Ultimate General: Civil War have been quietly toiling away on Ultimate Admiral: Dreadnoughts for over a year now. While project lead Nick Thomadis makes no direct mention of Rule the Waves in the forum thread that is, currently, the only source of information on UAD, reading statements like...

“It is going to be an RTS game in which you control multiple ships that you design and bring to combat. A naval arms race beginning in 1890 in which you aim to create the most powerful fleet in the world.”

“You will focus on designing ships, carefully choosing allies and enemies, and fighting naval battles. The goal is to grow stronger and not be destroyed by the AI.”

“Player will be able to place main turrets, secondary turrets, casemate turrets, superstructures, masts, funnels, and decide on the shape of the hull, armor, barbette placement… All having historical constraints naturally limiting the players from creating strange and impossible monsters. All affecting ship performance in combat and movement.”

...it's difficult to believe Wallin's title wasn't a catalyst. 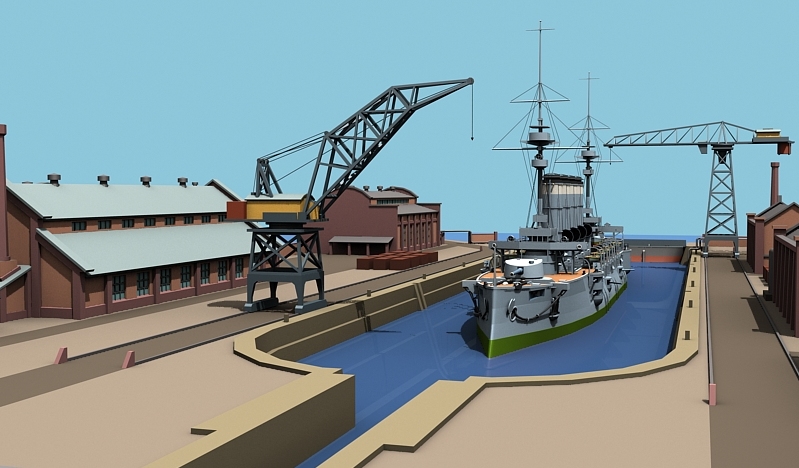 Players of the exceptionally winsome and ergonomic Ultimate General Civil War won't be surprised to learn that Nick and chums are aiming to build something a little kinder on the eye and index finger than RTW. There are fewer dirtier words at Game-Labs than 'micromanagement' and the studio boasts an art department packed to the gunnels with talent. As the surrounding WIP images testify. 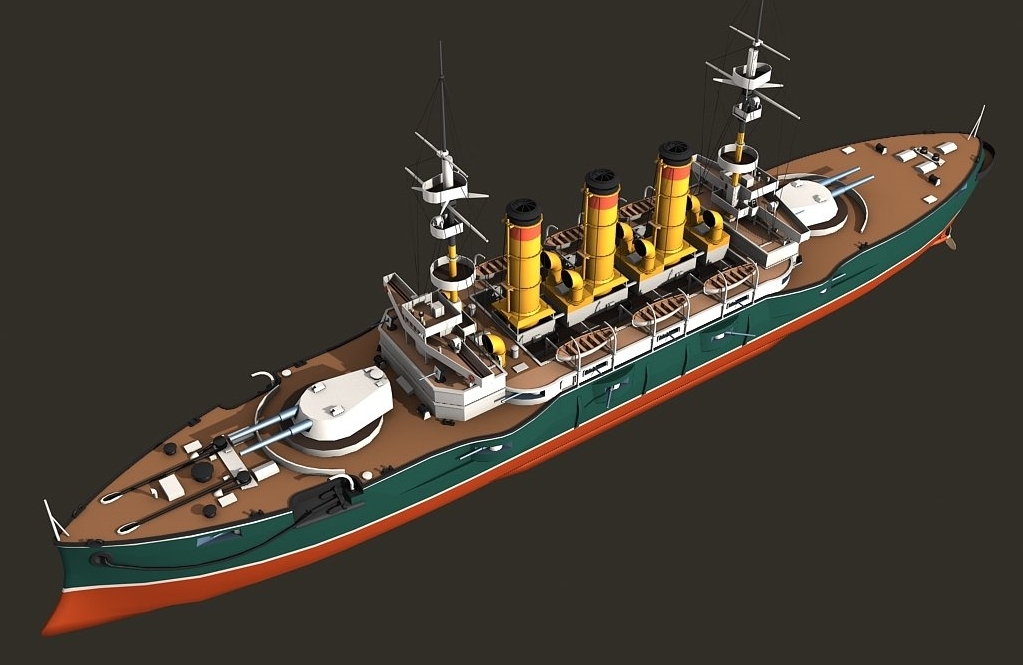 If all goes to plan, before the year is out beefy chaps with sledgehammers will dislodge the wedges that keep Ultimate Admiral: Dreadnoughts on the slipway. Once bobbing in Early Access creek there will, if UGCW is any guide, then be a lengthy period of fitting out before this exciting project is commissioned. 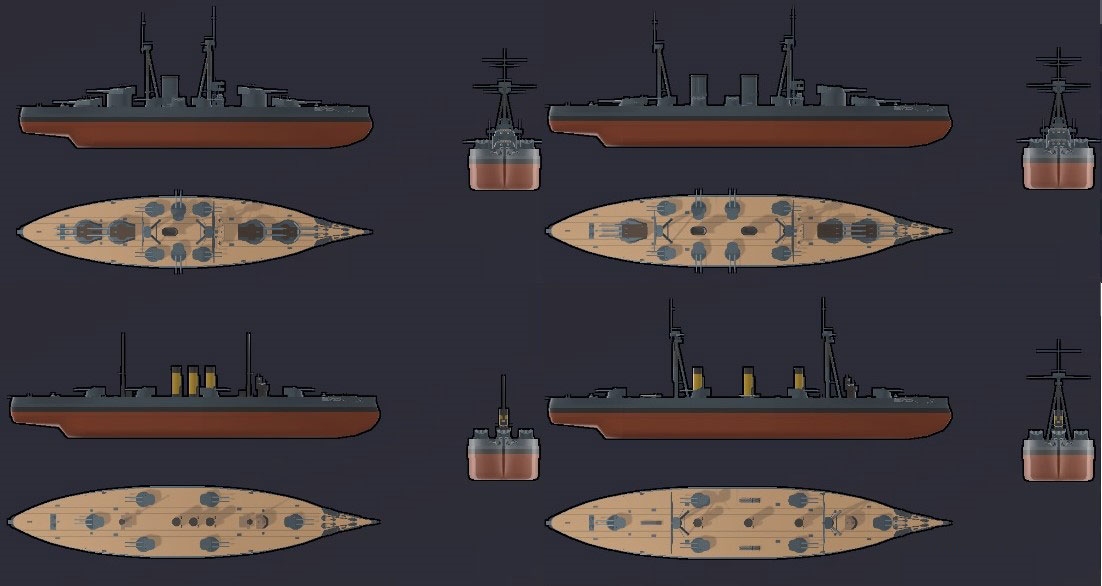 Well, that wasn't unenjoyable. With a little help from a motley, AI-controlled Kamfgruppe of halftracks and Panzer IIIs, I've just retaken a railway station that had fallen into Soviet hands. My whitewashed Tiger was clanged by AP shells expectorated by T-34s, KV-1s and various AT guns, and rocked by rockets flung by low-flying Sturmoviks during the course of the advance but somehow managed to soldier on and get the job done. 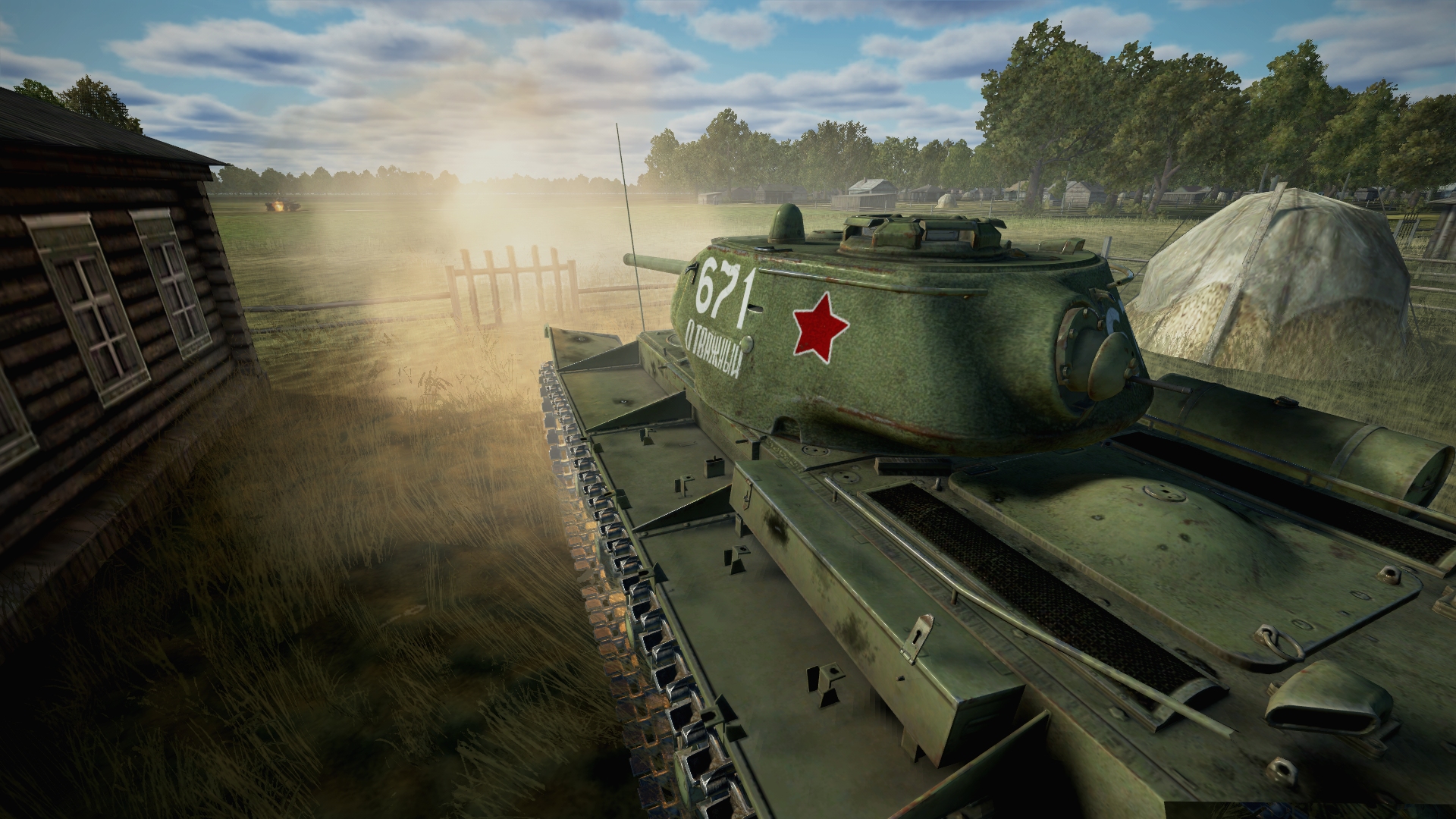 In the very early stages of Early Access, Tank Crew – Clash at Prokhorovka presently lacks six of its ten driveables, and comes without its lumpy/large Kursk Salient map, yet is still capable of entertaining. The included KV-1 and Tiger (simple versions of the T-34 and PzKpfw III are also available) can be tested in Quick Mission mode on any IL-2 map against a variety of static and mobile foes in much the same way as series aircraft. Via three scenarios, one of which is that railhead reconquest mission, you can also get a feel for the kind of scripted single-player actions that will ultimately populate the two campaigns. 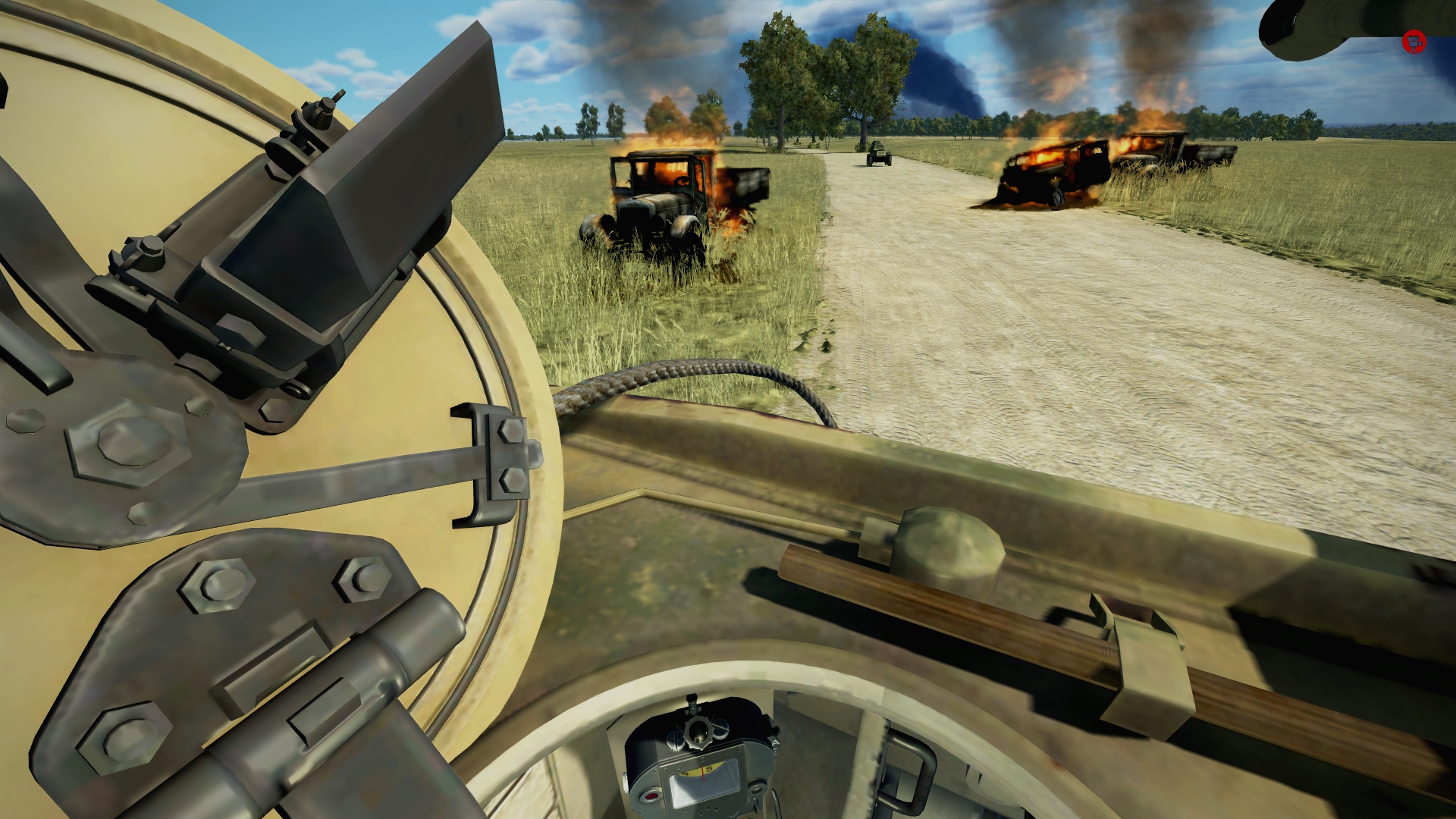 With things like gearboxes, smoke mortars, binoculars, and tank commander instructions (Go there! Target that!..) yet to be implemented, Steel Fury, Panzer Front Ausf.B, and Panzer Elite Special Edition veterans will probably find the facilities a little rudimentary at the moment. Over time shortcomings like these are sure to be addressed, and, hopefully, 777/1CGS's stance on infantry...

“We do not have the technology or resources to make infantry. We make a vehicle simulation.” (Jason Williams, Producer) 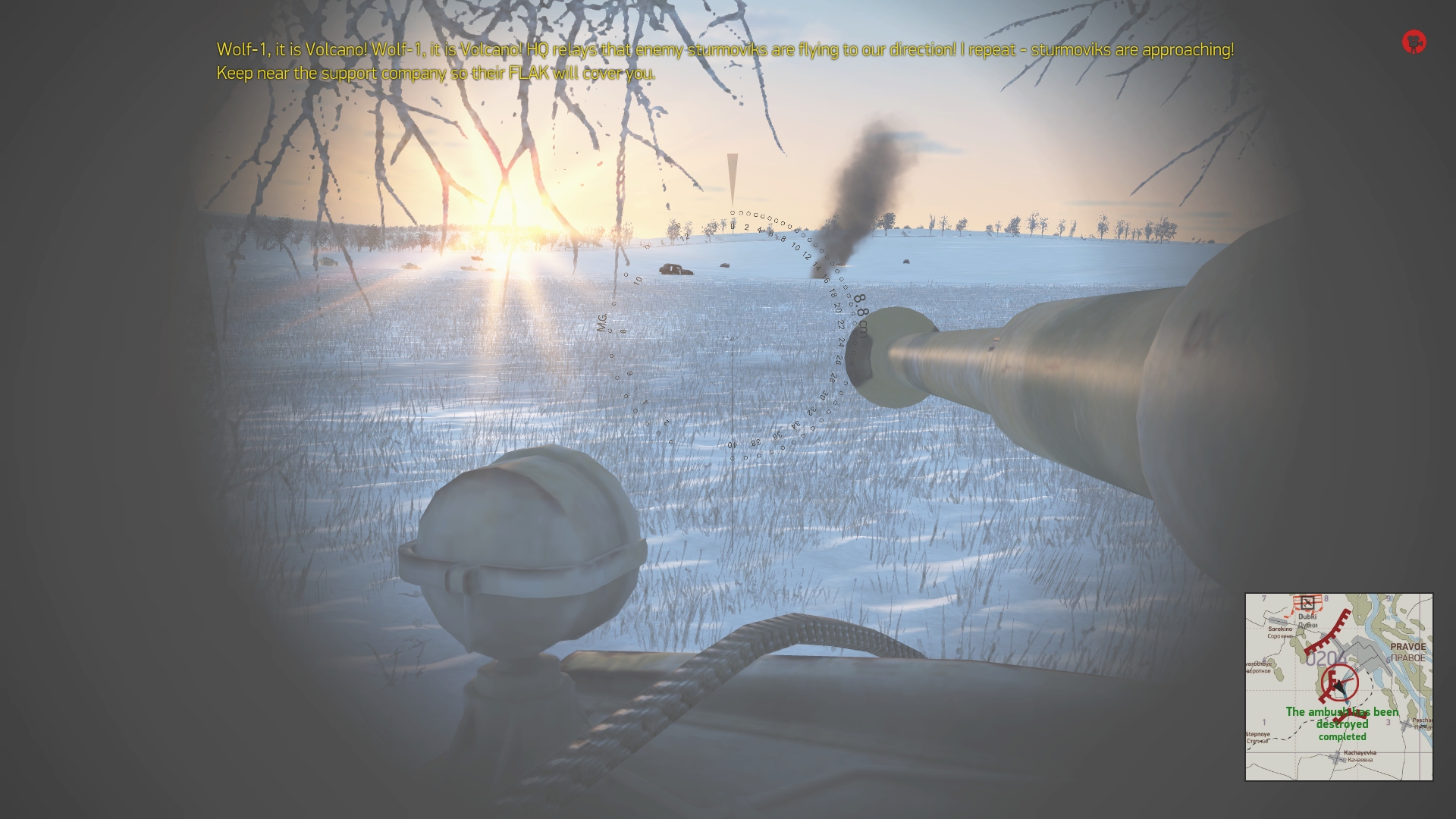 All of the aforementioned classics model foot sloggers, and their battlefields are far more interesting, believable places as a result. Given a choice between grunts and a slightly smaller ride selection, personally I'd plump for fewer tanks.

Pictured above is my jammiest kill thus far. In Tank Crew not only do shells glance off steel, sod, and water on occasion, but given the right trajectory they can travel for miles before running out of zip. The HE round that ripped the starboard wing off this about-to-taxi IL-2 was one of perhaps a dozen I speculatively loosed at a faraway VVS airbase. It travelled a good 3km before conducting the amputation.

Without Graviteam-style after-action impact arrows, it's difficult to properly assess the current penetration and damage modelling. The fact that Tigers are able to withstand blizzards of fire from threats like BT-7s and BA-10s while KV-1s when faced by comparable enemies feel less robust, suggests that there's already some sophistication in the algorithms. On a couple of occasions I've lost KV-1 caterpillars to AP fire, but I've yet to see shattered vision blocks, disabled weaponry, or tossed turrets. Presumably subtleties like these will be introduced during the Early Access year.

One of the biggest challenges facing 777/1CGS is the coding of credible AI. The game is already more attractive than its rivals, but if the devs are serious about supplanting the likes of Steel Fury, Tank Crew really has to offer silicon opponents that understand the value of hull-down positions and know when to shoot-and-scoot, use smoke, reverse and ram. The two big words on the box lid suggest the devs are as interested in the fleshy components of a WW2 MBT as the ferrous ones. An army of expectant solo tank simmers is praying that this is indeed the case. 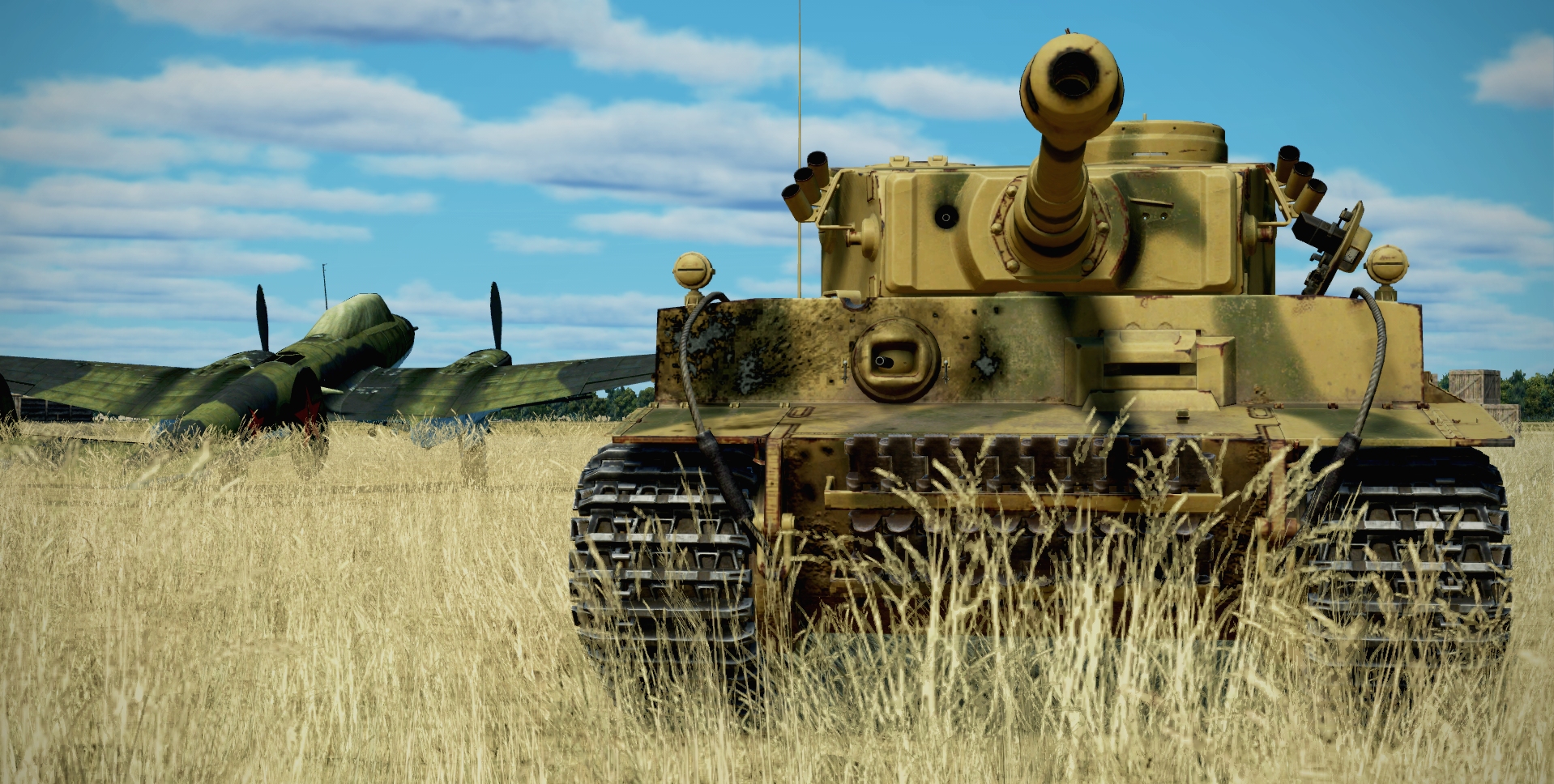