When I first saw HP's Omen X 2S dual-screen gaming laptop a couple of months ago, I thought they were having a laugh. After all, what could you possibly do with such a tiny secondary display above the main keyboard when you're playing games? It screamed 'gimmick' at the time, but after visiting Intel's Open House event last week (in between getting enslaved by the Acer Thronos mega chair), it would appear that lots of other laptop makers are following suit. It is becoming 'a thing', as they say, with some sticking even bigger screens above the keyboard, while others are cramming it into the laptop's touchpad.

It's madness, pure and simple, but with a new version of Windows 10 on the way that's also been designed with dual-screen devices in mind (Windows 10X), could there actually be some vague kind of logic to it? Join me as I examine the good, the bad and the ugly of tomorrow's dual-screen laptops.

First, let's talk a bit about how these dual-screen laptops actually work. Right now, the second screen effectively functions in much the same way as having a second monitor attached to your PC. It appears as an entirely separate display in Windows 10's settings menu with its own resolution, brightness and scaling options etc (as seen below), and you can drag and drop desktop icons onto it and use it to open up programs. 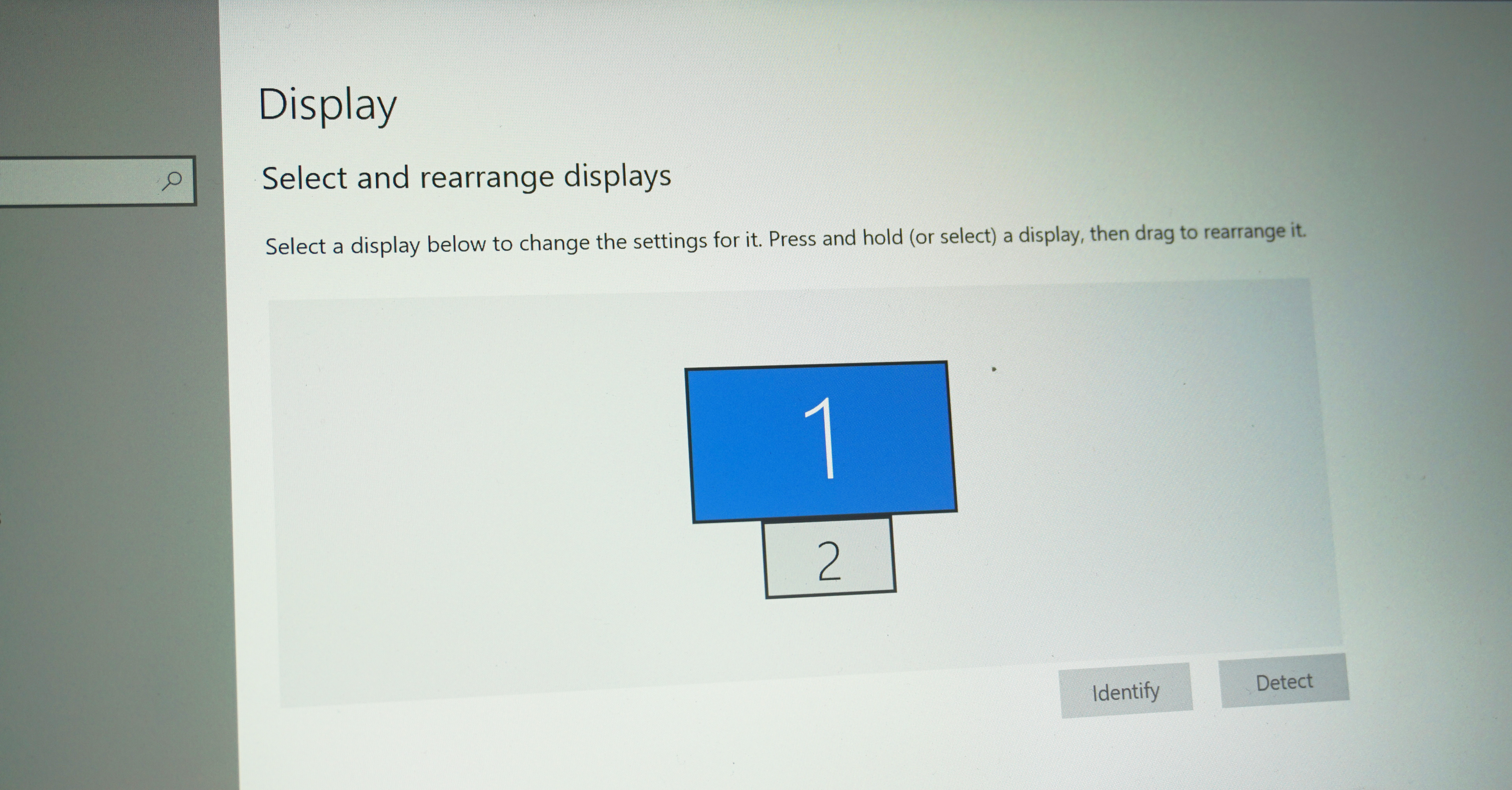 This could be useful if you like having chat apps open while playing games, for example, or you regularly listen to your own music. Heck, you could even use to keep one of our guides open at all times to help you through a particularly tricky section of whatever you're playing. I also saw them being used for things like signing documents (most of them were touchscreens, innit), and there were even a couple with sound dials on them for things like music creation software.

It sounds like Windows 10X devices will operate in exactly the same way, too - albeit with some extra power-saving enhancements going on behind the scenes so the laptop/tablet/Surface Neo/whatever is able power those two screens simultaneously without rinsing its battery life. 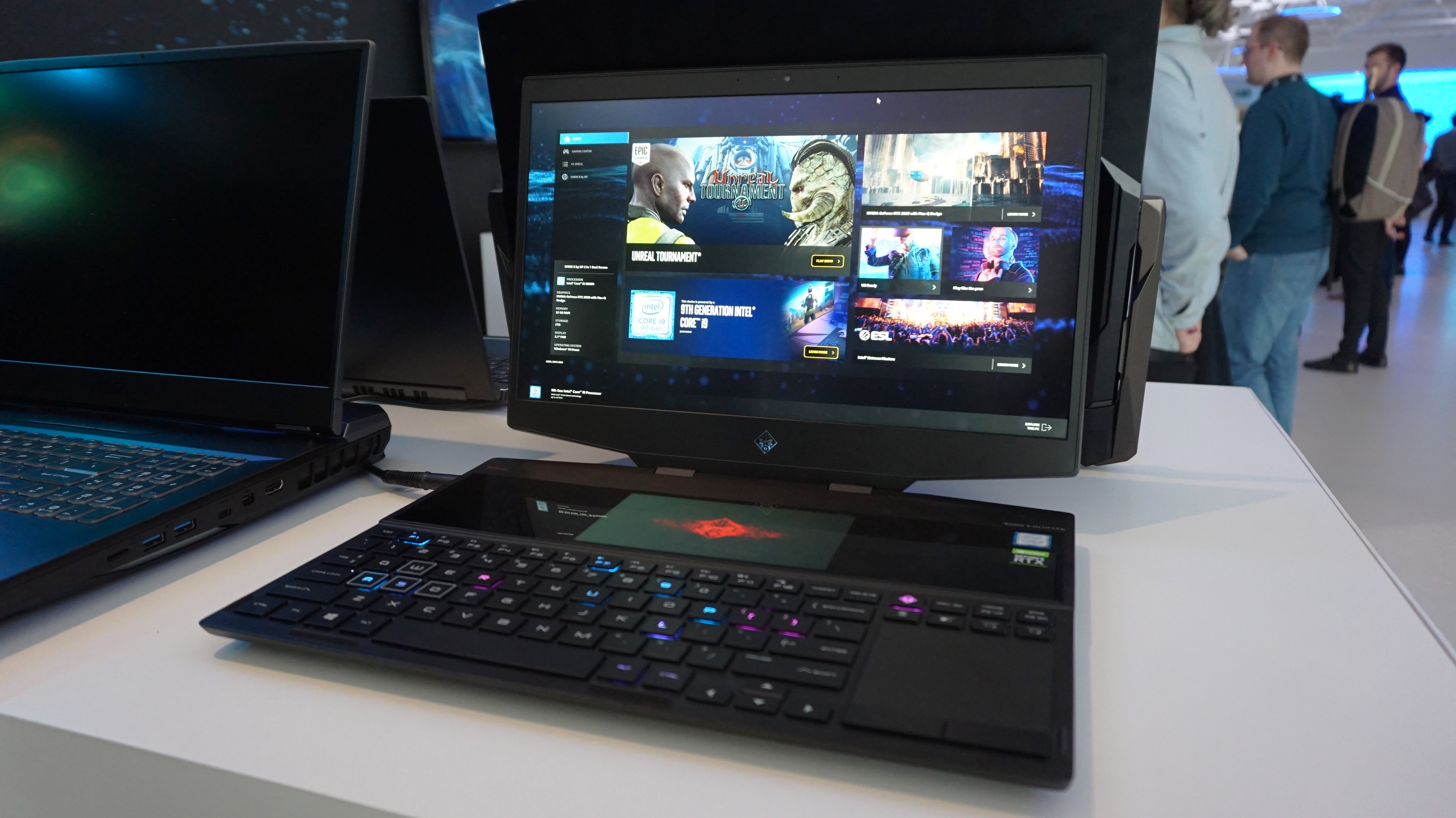 It might be the world's first gaming laptop to come with two screens, but the HP Omen X 2S was definitely the worst dual-screen laptop I saw last week by quite some margin. Specs-wise, it's absolutely fine. Packed with a 9th Gen Core i9- CPU, a massive 32GB of RAM and an Nvidia GeForce RTX 2080 Max-Q graphics chip, the Omen X 2S blew the other dual-screen laptops there clean out of the water.

I just can't understand why anyone thought it would be a good idea to put a glossy finish on that secondary display. Under the bright lights of the Science Museum's Innovation floor, I found it very difficult to see anything on that second screen, as there were just too many reflections obscuring the action.


That whole top panel has a glossy finish, too, making it even more distracting than the screen itself. Perhaps HP will improve on this with next year's model, but for now, this is definitely not the way to do a dual-screen laptop.

That said, I'm not sure my 'bad' entry is much better, to be honest, as this Asus Zenbook has managed to stuff one into its tiny touch pad. Thankfully, this one has a matt finish, so its crop of icons are actually visible to the human eye in normal lighting conditions, but I can definitely see it being a pain in the ass when it comes to actually using it.

As you can see from the images below, there's a tiny little touch pad icon in the bottom left corner. Tap this, and the screen will go dark, transforming the display into a regular touch pad. It felt just as responsive as any regular touch pad when I tried it out, too, but I can already envision the accidental finger swipes that will activate it on the sly, or the occasional arm brush that will cause it to pull a sneaky switcheroo on it when I'm using the keyboard.


Asus also had their own app launching software installed on this particular device, but a quick tap of the home button will take you back to a regular (albeit tiny) secondary desktop screen like the HP Omen X 2S. Personally, I actually quite like Asus' second screen software, as it makes the icons a lot bigger and easier to press/click than its regular desktop. Naturally, you'll be able to add whatever icons / apps you like to the launcher when it actually comes out (which is currently slated for sometime next year), but I do quite like the idea of having a calculator to hand for when I'm working out percentages and things when I've got a word doc open up on the main screen.

Still, I'm not sure I'd really be wanting to watch a let's play video on a screen this small, or have any kind of web browser open to help me through a puzzle. It's just too tiny to be of any practical value, except maybe to skip a Spotify track or note down the odd frame rate number when I'm benchmarking. Instead, I want something MASSIVE - a bit like the second screen on the best dual-screen laptop I saw last week, the Asus Zenbook Pro Duo.

Now this is more like it. Taking up almost 50% of the laptop's lower half, this ridiculous second screen has a bonkers resolution of 1920x515 (an aspect ratio of just under 4:1), giving it enough space to fit two applications in side by side. On Asus' demo unit, they had Spotify and a hand-writing app onscreen, but I can see this kind of ultra-ultra-widescreen being a lot more useful for things like guides and walkthroughs when playing games, as the text is going to be a lot more legible than a tiny touch pad.

Asus also took the sensible decision to give this second IPS panel a matt finish as well, helping to keep things nice and visible under bright lights, and they've still found room to give you a proper touch pad, too. Yes, it's a bit small compared to your standard laptop touch pad, but at least you don't run the risk of accidentally brushing it with your wrist. You can also turn it into a touch-based number pad using its dedicated button on the keyboard, too.


This is what the HP Omen X 2S should have been, in my eyes, as it not only makes much better use of the laptop's overall space, but it's just a lot more practical to use on an everyday basis. You could probably even use it to play actual games on it, too, especially if you wanted to save battery by playing at a lower resolution. It will probably kill your neck in the process, but will I be trying some smaller pixel-based indie games on it once review samples are available? You betcha.

Sure, it's not going to be the main reason why you'd want to buy this particular laptop, but this is definitely the best implementation of the second screen I've seen so far. It's also the closest thing I've seen to Microsoft's own Surface Neo device, which they used to showcase Windows 10X at their recent Surface hardware event earlier in October. This foldable, almost book-like device comprises of two 9in displays most of the time, but it also has a removable keyboard that clips on to the lower half of one screen, giving you a similar device-wide secondary display above it, as you can see below.

If dual-screen laptops are going to become a thing, this is the direction I'd hope they go in. Not ridiculously tiny little things that have no practical use other than signing the odd PDF document every now and again. I want proper big jumbo screens that I can feasibly put another couple of windows on when I'm out and about - because man alive do I miss having two monitors when I'm away at a show or travelling to an event.

In situations like this, dual-screen laptops could be an absolute godsend. Back at home, however, I'm not so sure I'd really want that second screen, especially when I can just plug it into a monitor. There's also the problem of how comfortable something like the Zenbook Pro Duo would be to use on a day-to-day basis, especially when the second screen effectively robs you of having a wrist rest. The 15in version rectifies this somewhat by coming with a detachable one in the box, but you'd need a pretty big desk for it to not immediately fall off the edge of it - or at least a desk that's bigger than the one I've got at home, which already struggles to accommodate both my 15in Dell XPS 15 laptop and my 27in monitor.

In some ways, the whole idea of dual-screen laptops still feels like a classic case of "because we can"-itis, and the range of good-to-bad efforts I've seen so far very much reminds me of the spate of laptop-tablet hybrids that emerged in 2012 around the launch of Windows 8. Some were great, many were awful, and it wasn't long before everyone quickly went back to making normal laptops again.

Indeed, it's entirely possible that dual-screen laptops could be yet another one of those silly fads that people get excited about for a year before they decide they're an absolutely terrible idea and a complete waste of everybody's time and money. But with Microsoft themselves getting behind it in a big way with their Surface Neo device, there's also a slim possibility it might just change the face of gaming laptops as we know them today. It's a small chance, don't get me wrong, but consider my interest well and truly piqued.