It's Return Of The Obra Dinn! 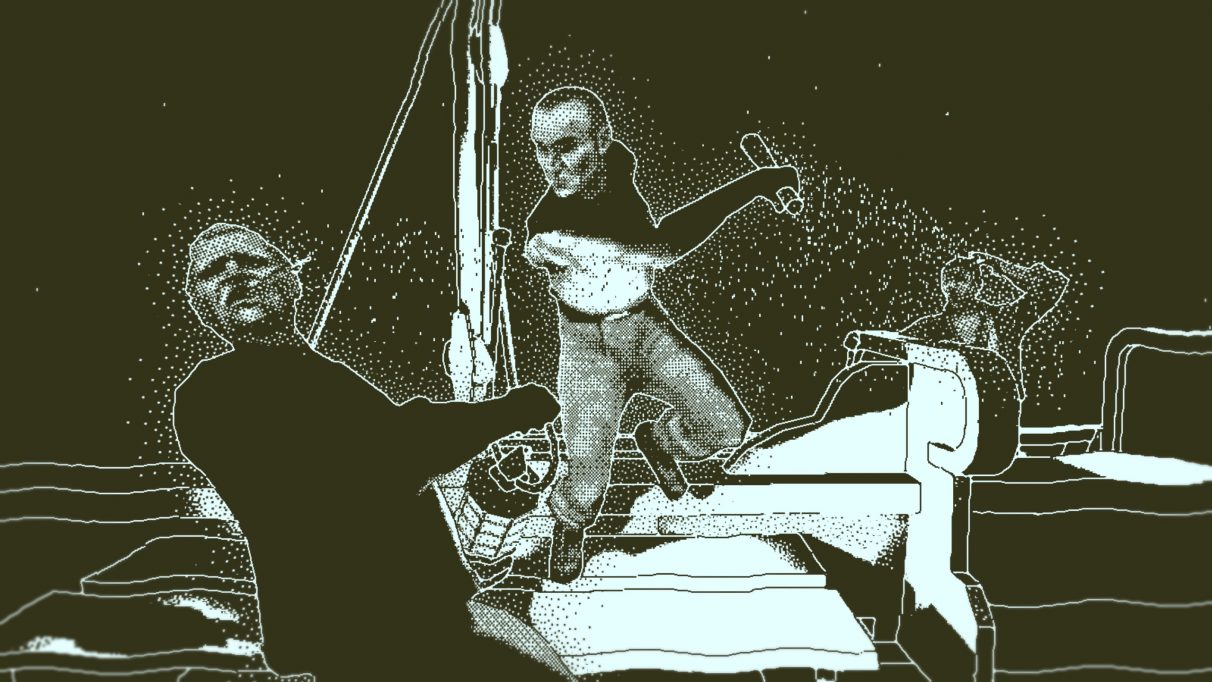 Alice Bee: I’m mad into mystery stories. When I was a kid I read but did not entirely understand a bunch of Agatha Christie novels, and read and understood even less the Sherlock Holmes short stories. Looking back, loads of the Holmes mysteries turned out to be really elaborate burglary plots, but hey, deadlines -- we’ve all been there, ACD. In a good mystery story, when the solution is revealed, you should kind of go “Aaaah! It all makes sense now!” and get the feeling that you could have figured it out yourself if you’d been paying enough attention.

So in an entirely subjective sense, I was always going to like Obra Dinn. Like Video Matthew has said countless times, Return of the Obra Dinn is an astonishingly good detective story, but you are the detective! You make the deductions and you’re like “I always knew I’d be good at this!” When I played it I sometimes mused out loud in an offensively broad Belgian accent: “Ah mon ami, but do you not see that the stewards all wear the same uniform? And so it is not possible that this man is the cap-i-tan’s steward!” Because finally my time had come! I was the smarty pants detective! 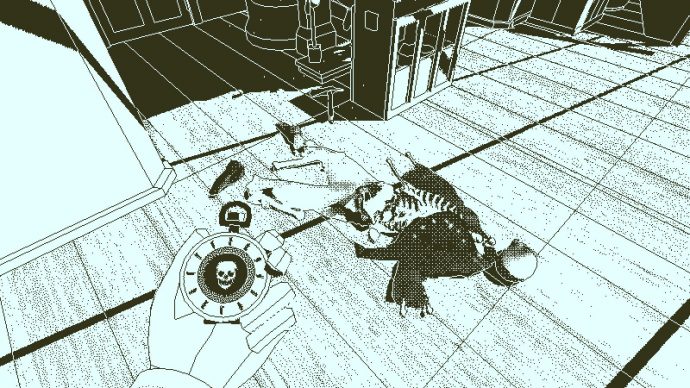 There are so many ways to solve ‘The Shocking Mystery of Who That Woman Is That Shot That Guy (Which Guy Is He Again?) And What Happened To Her’ buried in the ship itself, and the book, and in the other killings. I was convinced at every turn that I was solving murders in ways that Lucas Pope hadn’t anticipated, despite the fact that that is literally impossible. God, what an ego boost. What a rush!

So yes, I like it very a lot. But if I were pretending it was possible to be objective, I would also argue that there was nothing like Return of the Obra Dinn this year, which is why it deserves to be bestest. There were a lot of excellent games in 2018, but they all had a familiar genre shape to ‘em, like when you see a wrapped present and know it’s a bottle. You can’t tell if its a bottle of lovely booze or a bottle of liquid shite, but it’s bottle shaped and you’ve had good experiences with bottles before. Whereas if you wrapped up Return of the Obra Dinn it wouldn’t look like much you recognised at all. And when opened it is a matryoshka doll, except nesting inside the first is a model ship and then a faberge egg and then a game of Cluedo and then a giant, beautiful encyclopedia. And then me doing an impression of Hercule Poirot.

Alec: Startled, that's how I felt. A sense of shock, giddy excitement at something that felt New. 2018's been a doughty year for games - hell, this was the year of both Into The Breach and Slay The Spire, the supreme elegance of which make everything else in their respective genres look like 300 five year olds tried to build a gingerbread house together.

Obra Dinn says 'no' to all that, but it says no without being a dick about it. A game of deduction and tragedy, building striking mood and place without force-feeding us even a morsel of greasy lore or exposition. It's an invitation to use a different part of that big, squidgy thing that rots away inside our skulls. Not the lizardy part that hungers endlessly to see numbers get slightly bigger, the part that puts two and two together, that speculates and calculates and remembers and suspects and worries and doubts and interrogates. 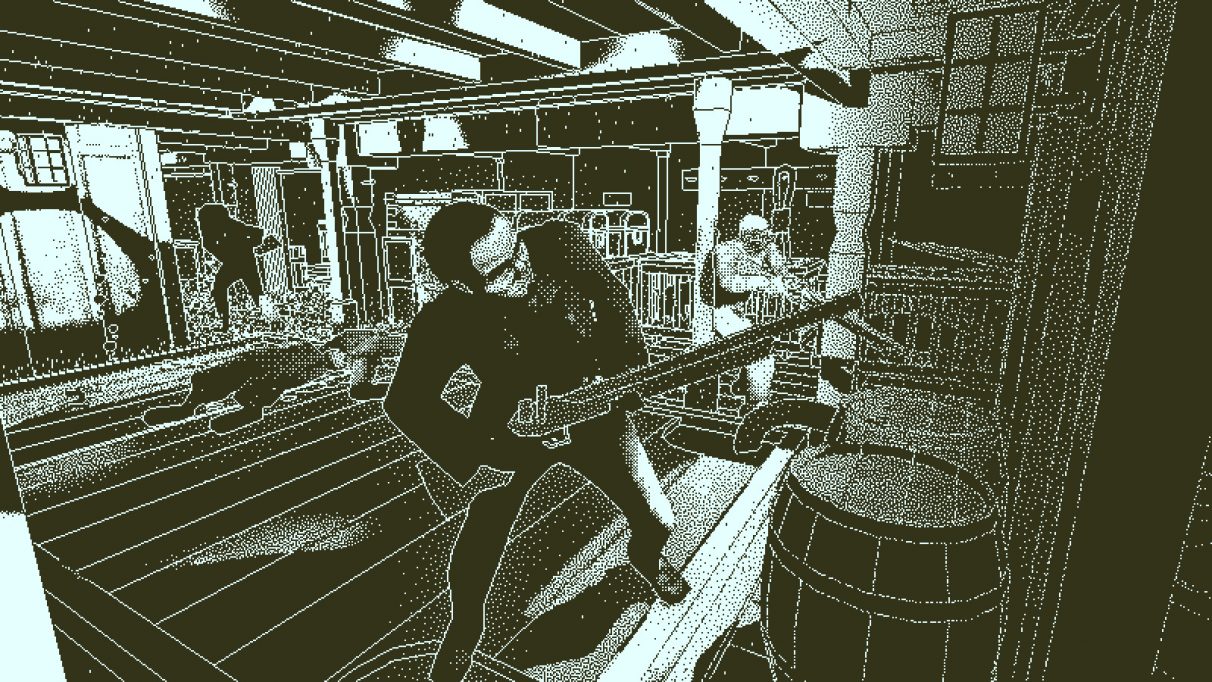 The problem with tarring a game with the Clever brush is that it instantly makes it sound inaccessible, even hostile, to folk who play games to kick off their shoes and soak their tired feet in warmly fantastical waters. Obra Dinn is clever, but's it not maths-clever, or even lateral thinking-clever. It's human-clever. The sort of natural cleverness that we all have, that we use to piece together a picture of someone else's life and character, to figure what's going on around us.

That's what startled me. A game which saunters, all casual like, into a corner of my brain that I use all the time in meatspace, but almost never in screenspace. If Papers, Please was a test of empathy, Obra Dinn is a test of intuition. Human games.

Brendan: Obra Dinn is brilliant at the smash cut. Every one of its death scenes begins with a blank screen and some atmospheric noise, rough words from rough sailors, the sound of rain or a creaking hull, and then – WHOMP. Smash cut into a man being [redacted] by a huge [redacted]. Smash cut into Mr [redacted] being clobbered by Mr [redacted]. Smash cut into the [redacted] blasting the [redacted] with a pistol, powder and fire everywhere. These scenes are abruptly thrown at you, along with the rising, churning dread of the game’s classical strings, and it’s brilliant. It’s like being kidnapped by some frightening stranger who throws a bag over your head, and later whips it off to reveal you are now sitting in front of some dark masterpiece at the National Gallery. “How do you like THAT?” says Return Of The Obra Dinn. “Good lord,” you say, “it’s fascinating, it’s tragic, it’s incredible. Do it again.” 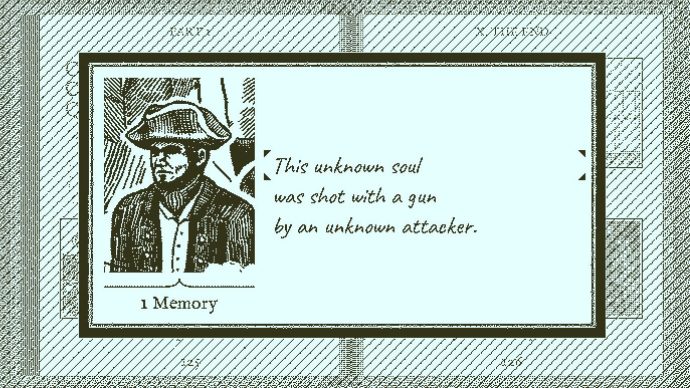 Matthew: Return of the Obra Dinn is the closest a game has made me feel to being a detective, and not just a reader following a breadcrumb trail through a well-written mystery. Specifically, it makes me feel like the cop banished to the filing room where he finds the impossible cold case no one could ever quite crack. He’s got every scrap of evidence from the scene, if only he could pick out the relevant threads and tie them together. Only instead of it being a cardboard box full of dusty files, this cold case is a 18th century ship which you’re free to explore and peer into its past with a magic watch. This never happened in The Wire.

I knew Obra Dinn was clever, but didn’t realise how clever until other people started playing it. Reading forum posts or watching Katharine play I saw people taking the same wealth of information and applying it in totally different ways. I didn’t, for example, solve any of the mysteries onboard the ship on the basis of people’s shoes, and yet there was Katharine, hungrily eyeing up the footwear of men in their bunks, attempting to tell one plimsoll from the next. In fact, she seemed to solve the whole ship in reverse order to me, showing just how rich the world is with clues.

I love how it conjures the spirit of so many different detectives. Sometimes you are Poirot, deducing the deed from the people present and the clear facts given. Sometimes you are Holmes, your eagle eye picking up a pixel of evidence no other person saw. Sometimes you are Gene Hackman in The Conversation, scrubbing the same moment in history for some hidden intonation of murderous intent. Sometimes you are a weird crime-solving Doctor Who, finding a dead body and tracing its slow demise as it unfolds in the background of other people’s deaths. And sometimes you are just an insurance adjuster, watching a heavy box bonk a sailor on the head. It is one of my favourite games of this or any year. 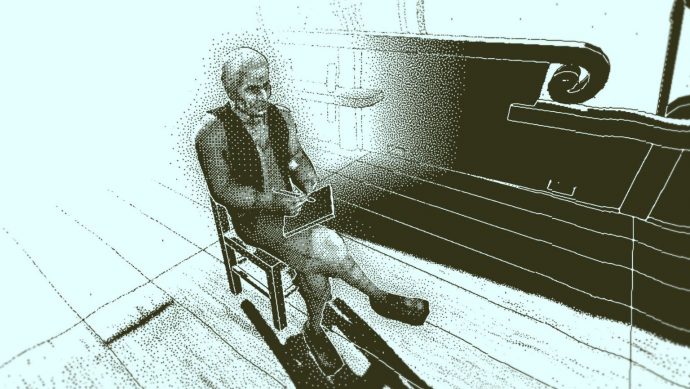 Dave: No game made me feel as smart as Return of the Obra Dinn did. This monochrome murder mystery from Lucas Pope takes the player to the moment where the subjects in question perished. Initially it’s quite intimidating, with each flashback filling me with dread when another corpse is discovered in the scene. To progress, you must identify the corpse, who murdered them, and how. By not immediately knowing when I had the correct answer until three of them were correct, there was a lot of second guessing.

And yet, I was compelled to find out the fate of the crew and got a huge thrill when the game revealed that I was correct. All of this from a game that could easily have seen a home on a 1980s monitor, even down to listing the monitor styles in its options menu.

It’s definitely hard, particularly when it comes to getting used to the menus and how to use the book of the dead crew to identify certain key players. But when everything clicks it fast becomes an enjoyable sleuthing adventure, and unlike a lot of murder mystery games, I felt like a detective.

That’s what made Obra Dinn so rewarding: Like noticing the little details in a scene that make everything click into place. I did all the work and pieced together the missing pieces. That’s why it is the best game I played this year: I got to be the one to solve a mystery.

Alice O: I'm sure everyone else has talked plenty about the thrills of hidden details, about the joys of inference, about how surprising the surprises are, and about how much they want to be/kiss some of those surprises, so I can skip past all that.

What I want to talk about is the music. Specifically, I want to talk about how much I enjoy the clanging chimes (bells? clangs) in certain scenes. I'm not sold on a lot of the music (some tunes seem out of place, and some synthstruments sound pretty bad?) but I adore the clanging and, even more than that, the twiddly reprise which I cannot begin to describe but will say kicks off at the 1:20 mark in this song: