This morning is day 10 of the RPS Advent Calendar, and you know what? I think you've been on the computer too long. Staring at this here internetmajig. 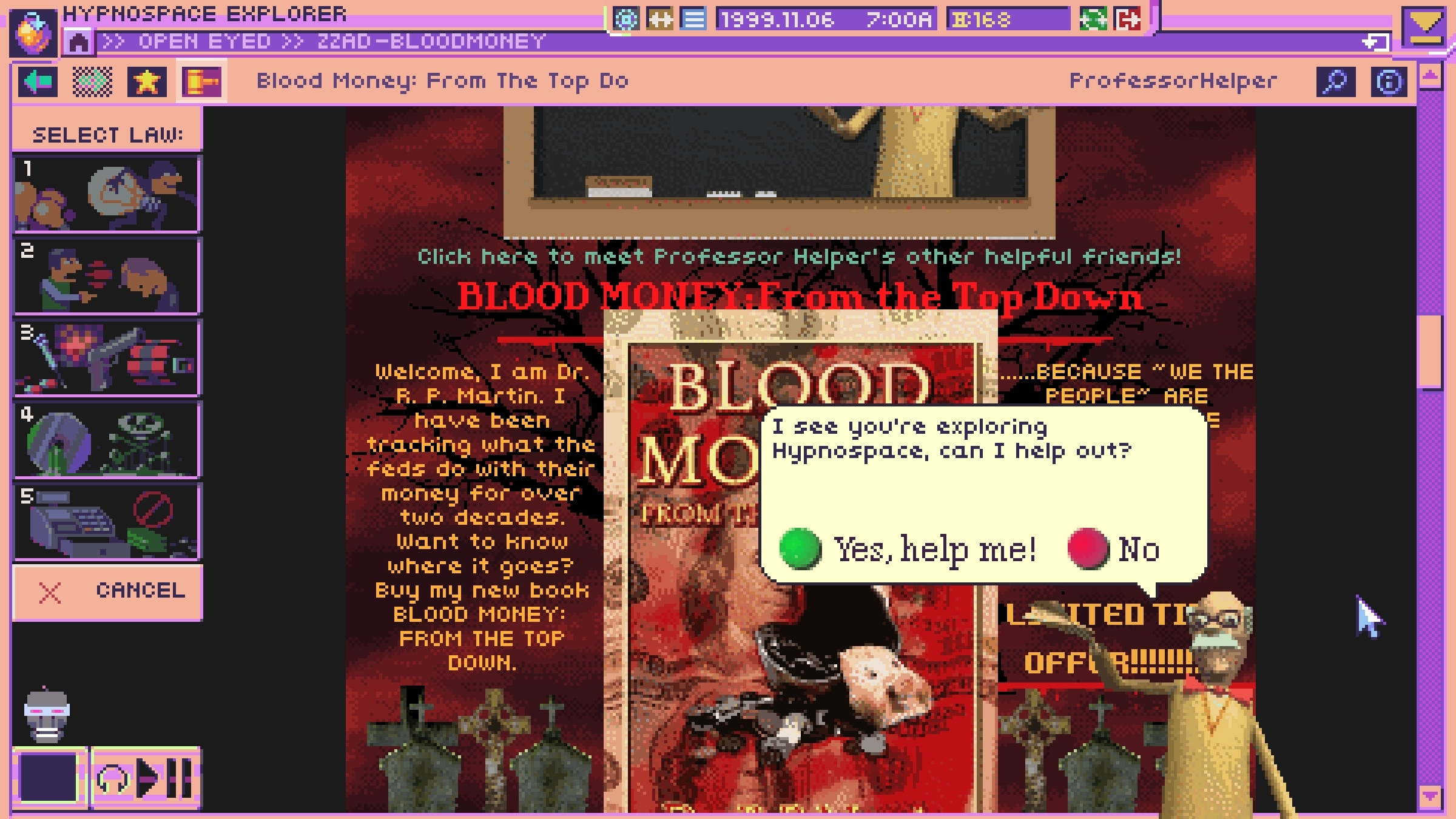 Katharine: I remember when the internet looked like Hypnospace. It might be hard to fathom now if you're a young'un who's grown up with social media feeds throbbing through your veins, but yes, web directories like the game's Teentopia Paradise and Goodtime Valley were indeed a thing that happened. It was how I navigated the early internet, before Google made it all so easy/terrible by accidentally birthing the ongoing general plague and specific bane of my life known as 'search engine optimisation'. There's a large part of me that wishes it was still like this. Just, you know, without the mind control headbands that may or may not fry your brain while you sleep.

As a museum piece alone, Hypnospace Outlaw is pitch perfect. It captures that feeling of discovering the early internet with expert precision, and rooting around its brilliantly observed user pages for naughty misdemeanours like copyright infringement, file sharing and horrible viruses was like stepping back in time. There's such depth and personality to be found in these pages that you can almost believe this community of weirdos exists in real life, and I found myself becoming increasingly invested in the lives and emerging relationships of these imaginary internet people as the game went on.

Their lives unfold so organically, too. Her Story may have popularised the central hook of searching a database to figure out the plot, but I'd argue that Hypnospace takes it one step further, if only because there's so much more to see and investigate than what's required to finish the main story. By giving you free rein to browse its ever-growing sprawl of internet niches, you end up discovering some surprisingly heartfelt (and at times tragic) stories rumbling along in the background, and piecing these fragments together and seeing them evolve over time is one of Hypnospace Outlaw's greatest triumphs. Indeed, I have never seen such fervour to protect and uphold the freedoms of a goldfish detective mascot in my life, nor did I expect to feel such anguish at the loss of a past-it 'Coolpunk' musician.

The way Hypnospace's online denizens react to your own actions is another touch of genius. It's one thing to see rivalries and relationships form between the people you're investigating, but it's another thing altogether to see them turn against you, the player, as you go about building your case files. It reinforces the idea that you, too, are having a tangible impact on this weird and wonderful online frontier, even though you don't have a page to call your own. 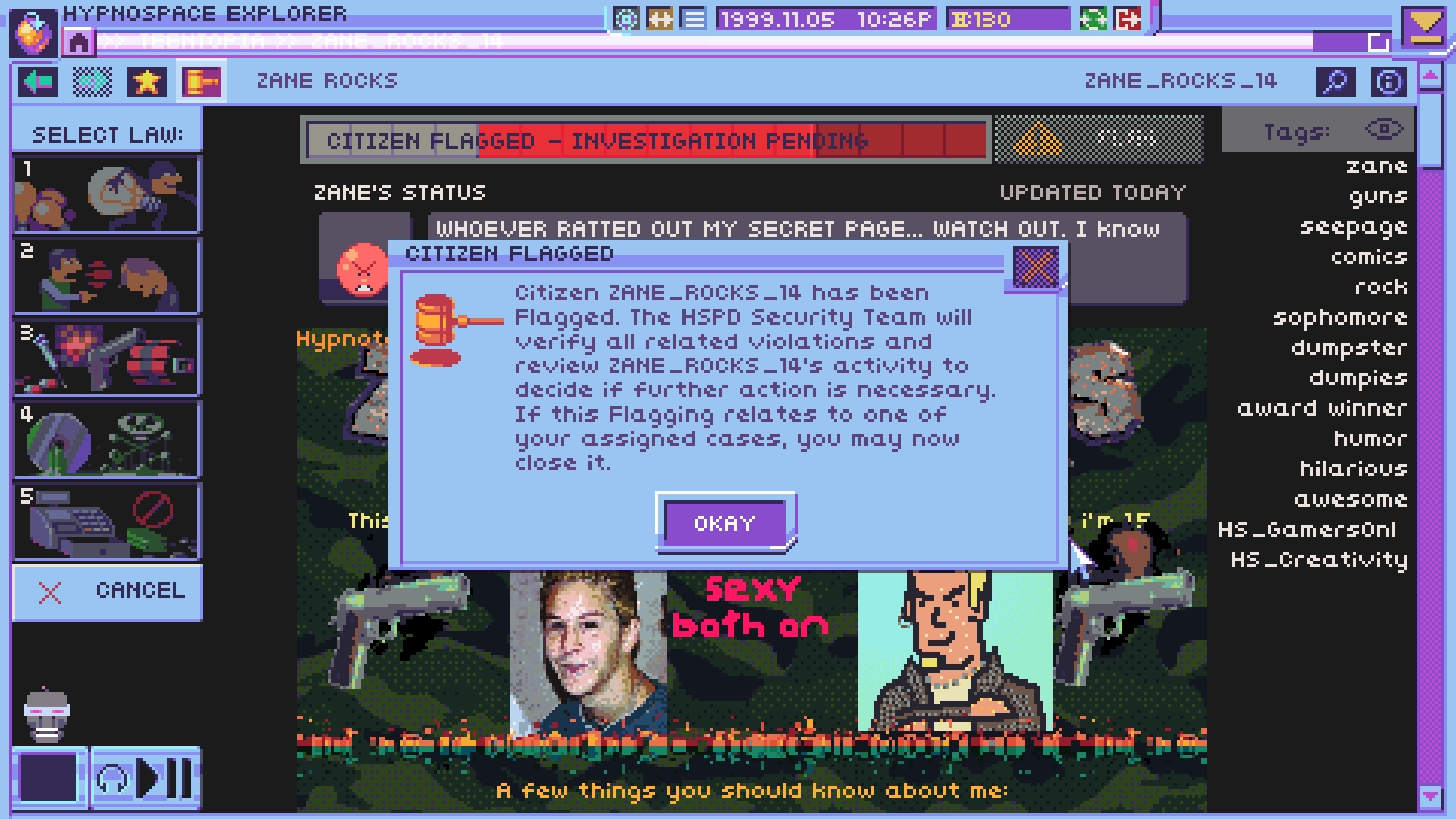 Dave: I should preface my adoration for Hypnospace Outlaw by saying that I hated playing it at EGX. Playing such a heavily involved game, with such a specific interface, is not suited to an environment where a queue of people are staring daggers at your back because you're "taking too long" to solve the puzzle.

When I played it in the relative quietness of my own home, this detective game set entirely within the strange Geocities websites of the late 90s and early 2000s, I enjoyed it a heck of a lot more. Stepping into the role as a Hypnospace Admin only clicked once I was able to play at my own pace. It can get obtuse at times, particularly the part that parodies the website navigation of Neopets, but at least Professor Helper is there to help. He's always there to help.

It helps that I was one of those early nerds who tried to make a fan site in Geocities - it was based on Dragon Quest - so I, like Katharine, saw a lot of familiar things here. Sites full of cyber-bullying, pages dedicated entirely to insignificant fictional characters, and even some playing that same audio loop of Crawling by Linkin' Park. Then there were frames. Who remembers frames? God, they were a mistake. Exploring Hypnospace was like stepping into a time machine, and one which can only transport you to swamp of teenage angst and tributes to pointless idols. It's great