Whatever you do, don't open door number 12 on the RPS Advent Calendar. You'll let all the air out. No. What are you doing? Stop! STOP!!

It's Oxygen Not Included! 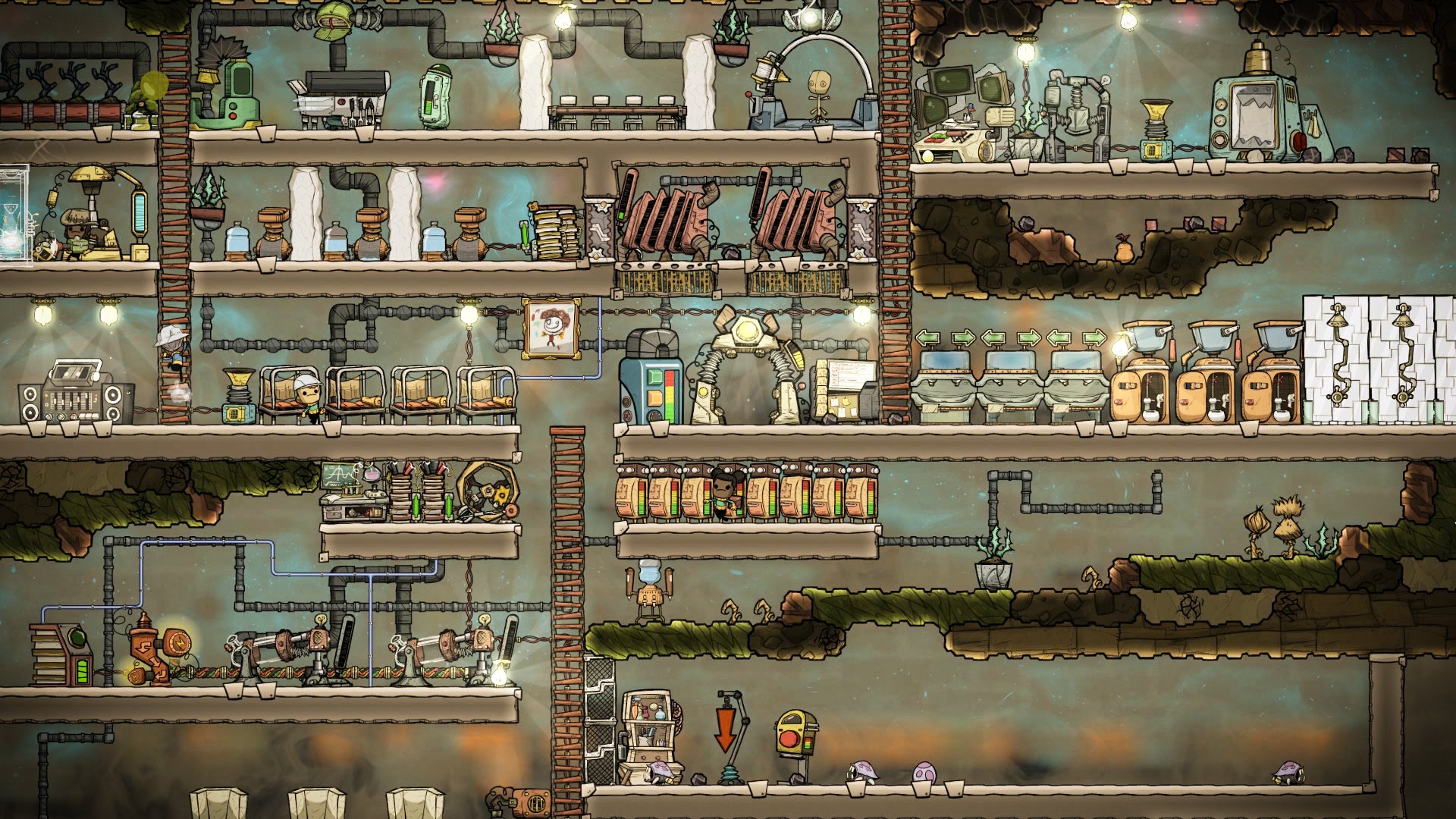 Ollie: Stinky is a dupe, one of Oxygen Not Included's cute and almost entirely expendable worker drones. And he has a death wish. From the moment the Printing Pod schloops him out into our lonely asteroid, he takes one look at his drab, algae-covered surroundings; at his mindless clone comrades running to and fro, stuck in their daily subterranean grind; at the frankly bewildering arrays of leaky toilet-water pipes and chunky gas pipes pumping stale, recycled oxygen throughout his new home. And he decides the most sensible thing to do is to do himself in, as quickly and efficiently as he can.

Which I suppose is a fairly appropriate response. But it makes my job extremely difficult. Because it means that while I'm busy trying to play Oxygen Not Included, Stinky is playing Untitled Goose Game. Or some macabre twist on it, where the goose's eventual aim is to take its own life, and wants to cause as much irritation and disruption as possible on the way out.

It'll go like this. I'll load up the game, pan around viewing the state of my dear and dedicated dupes, assign a few new tasks, and unpause the game. As the cycles pass, I'll watch my workforce toil away tirelessly: let's say they're creating a new coal generator array, in the dark and dangerous ice biome below our base. After a while, satisfied with progress, I'll pan upwards to check on the habitation levels, only to find Stinky standing at the very bottom of our clean water reservoir, seconds from drowning and looking extremely happy with himself. I'll set the base to red alert and order a ladder to be built, but it will, of course, be too late. Stinky will keel over, eyes crossed, his mission accomplished.

I will sigh and reload, like a weary skynet hitting the time travel button once again. This time, I will avert Stinky's drowning. Within a few cycles, however, Stinky will have pissed in that very same water reservoir (despite the toilets being right fucking there next to him), and gotten his head stuck in the ceiling. His body will jerk and his limbs flail like a demented puppet, as he asphyxiates inside the roof. Red Alert! Someone dig out that block! But it will, once again, be too late. Stinky will always be one step ahead of me. He's smart. He's resourceful. And he'll always find a way to die.

Nate: Hi, my name is Nate, and today I would like to talk to you about gas, if you're not too busy. Please may I come in? Thank you.

I learned loads about gas at school. Mostly from smashing back dozens upon dozens of hard-boiled eggs, then wrenching out non-stop, face-purpling arsebarks in the grim confines of the changing rooms. Only joking! I was actually very fragrant at school, and only did a guff for the very first time when it became legal to do so at the age of 21.

No, silly billy. I'm talking about chemistry, of course, where I learned that there are three big laws governing the behaviour of gases - Boyle's law, Charles' law and... the other one. That's the problem, you see. I spent most of my chemistry lessons chatting with my mates Chris and Greg, and surreptitiously drawing images of our teacher's head on the body of an enormous brute with a minigun instead of an arm. We did whole comic strips about him, which I seem to remember culminated in him hurling the entire universe at his son (whom he had constructed from pure potassium), in rage over the fact his creation wanted to live a peaceful life.

There was one amazing time where we didn't realise he was standing right behind us as we drew, until he asked us - perfectly affably - what we were doing. Deciding honesty was the best policy, we went ahead and explained the whole plot to him. "Well, sir, that's your enemy - a giant bear with army medals - and as you can see, you're assaulting him using the planet Saturn as a weapon." In a move that gained our unending respect, he responded with a mild, carefree laugh, and told us that if we didn't get on with the work that had been set, he would throw us into the sun.

So yeah, I remember that, but not really the gas stuff - like eighty percent of my chemistry knowledge, it was crammed into my head during a sleepless week in order to pass my A-levels, and then fell out of my head again immediately afterwards. I think it was something about pressure and temperature and volume and that? Anyway, once I'd left school and it became clear I wasn't going to end up working in the sciences, I didn't feel too bad about having forgotten it all. I mean, really, the laws governing the behaviour of gases weren't really going to come up much in non-gas-related professional life, were they? And certainly not during leisure time, unless I developed some really exotic hobbies.

In 2017, however, it seemed I was about to be proved wrong. Space colony simulator Oxygen Not Included had just arrived in early access, and what was it about? Non. Stop. Gas. Carbon dioxide, chlorine, steam, hydrogen, methane: gas for days, mate. It even included oxygen, despite the assurances of its title. The game modelled everything about them, including - to my horror - their pressure, their temperature and their volume. Looks like my youthful hubris had finally come back to bite me on the arse, and I was going to suffer for my lack of gas knowledge at last.

Luckily, like any good Christmas tale (gaseous or otherwise), this story has a happy ending. Because it turns out that while Oxygen Not Included boasts an extremely deep, internally consistent simulation of materials, it's one that runs almost entirely at odds with the real behaviour of these substances. I would not, it turns out, have to know my Boyles from my Charleses to be able to build a functioning asteroid settlement after all.

Nevertheless, I would have to learn an entire new set of physical laws, invented by a Canadian game development studio, and which could never prove usable outside the context of playing Oxygen Not Included. There is a certain irony, then, to my dismissal of A-level gas knowledge as something I would never need, given that I would end up putting more work into learning and memorising an entirely pretend version of the same thing, which was somehow even more useless. Video games!