Two weeks into the RPS Advent Calendar already! Let's take up arms, brave companions, and batter down this door together. With a frying pan. 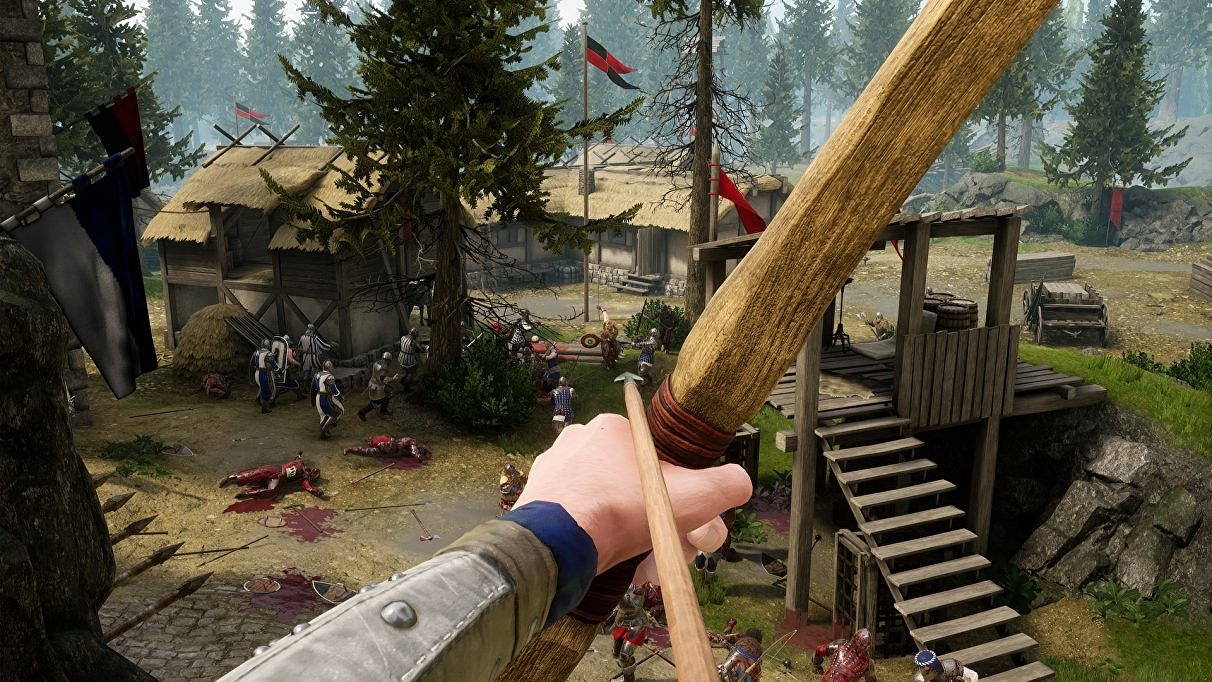 Matt: Mordhau is silly and sublime. It lets you ascend to great heights of swordplay, heights that loom larger than any sword swinger of yore. These heights are also filled with bare-chested idiots pretending to be boxers.

Heads roll, torsos crunch. Each grizzly detail, every meat sound, sells the fantasy. I once decapitated two people at once and shrieked.

Spectacle lures you in to Mordhau's combat, but finesse is what makes you stay. Techniques are myriad and subtle, more about mind games than precision or even speed. You survive by being unpredictable, constantly mixing up moves, lunging when and where your opponent least expects. It's intoxicating, whether you're submerged in the purity of a duel or the audacity of a fight where you're outnumbered.

The highs are higher when you win those fights. It's easier than you'd think, too, once you learn how to exploit people's arrogance. The trick is to play with people's attentions, deliberately looking away in order to lure them into surprise counter attacks. When it works you feel like a movie superhero, imbued with psychic battlefield awareness.

Those moments are ecstatic, but I might not pursue them if failure didn't always feel like my fault. That's what keeps me coming back. After every death, I immediately know how it might have been avoided. My head needn’t have rolled if I'd ducked. If I'd been smarter, or more aggressive, or come up with a better plan. It's fundamentally different to being shot at by people with faster reflexes and better aim, a competition where the result hangs in the moment rather than years of experience.

I still have to play with the chat disabled, mind. I've never felt the need to do that in another multiplayer game, but crusader imagery has an awful tendency to draw in awful people. It sucks even more that the developers have facilitated this, at one point claiming a chat filter would be seen as "censorship", refusing to delete a racist forum thread, and internally discussing a toggle to hide women and non-white characters. A chat filter is now on the way, but that will do little to help the rot Triterion have tolerated.

Ollie: Matt and Sin have already taken all of the words I had to say and made them better; but I'd be remiss if I didn't mention the greatest discovery I made during my time with Mordhau: the existence of Skirmish Duel servers.

I was already a familiar face on most duelling servers in Mordhau by that point, but they were just the bogstandard free-for-all duels, where you could challenge anyone anywhere to a fight there and then. No structure, no narrative, just duelling. Skirmish Duels changed that by dividing everyone into two teams, everyone with one life. You'd all pair off with someone from the other team, fight to the death, and the survivors would do the same until one team was left standing.

The reason this was such an incredible revelation to me was that it combined everything I loved about 1v1 duels with the spectacle and drama of larger team matches. Sometimes I'd end up as the only player left alive on my team, while five players remained on the other side. And as my fallen comrades looked on in amazement, I'd butcher my way through all five foes one at a time, and carry my team to victory. Those John Wick-style comebacks were something I'll always remember about Mordhau. I don't think any game has ever made me feel so powerful.