Howdy pardner. Reckon you oughta be fixin' to open up door 17 on that thar RPS Advent Calendar (is this obvious enough?).

It's The Cowboy Game! 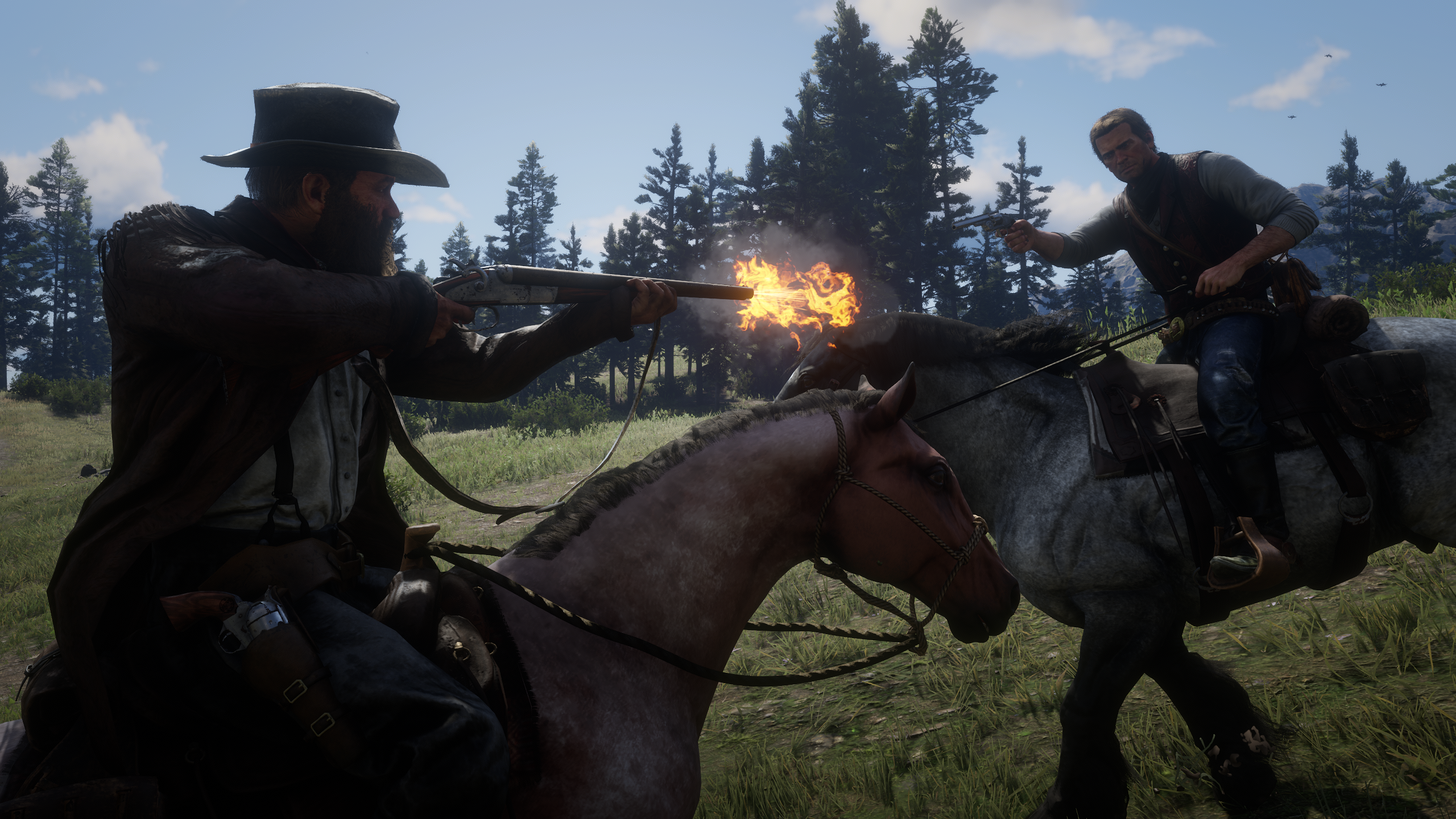 Katharine: Red Dead Redemption 2 does many things to an exceptionally high standard. Not only does the world look incredible (especially in silly ultrawide), but it's just so gosh darn detailed as well. For this declaration of advent joy, though, I want to give a shout out to Red Dead's lovely, lovely horses.

They are the best horses in all of video games. Fact. They have such heft and oomph and POWER. Oh, the power! Every trot, canter and gallop feels like you're riding on the back of a goddamn steam train, I tell you. They're so much horse-ier than, say, Assassin's Creed Odyssey's weedy stick freaks, whose joints are so stiff and mechanical that you can barely even call them horses (listen, I love Phobos, but only because I can chuck him off the edge of a cliff and have him incur zero injuries as a result). Heck, even Roach from The Witcher III can't compete with these majestic beasts. And yes, I did just 100% go there. If you've got a problem with that, you can find me in the town of Valentine where we shall dual with pistols at dawn.

Nate: Hey, boah! Eeeeasy there. Yerr a strawng one, aincha?

Luckily for me, I had something of a refresher course in Red Dead Redemption 2 yesterday, because I was streaming it as part of the RPS Christmas charity livestream thing (seriously, take a look - it was a right old lol). I will talk about it in a second, but first I want to share something a bit cute. While I was playing, my family at home decided to put the stream on the telly, and my sixteen-month-old daughter LOST HER MIND at the fact I was on TV, but all small and in the corner. Squealing with excitement, she ran up to the screen and tried to give my tiny face cuddles and kisses. Then, when I didn't react to her, she started waving and shouting "dada?". Eventually, she fell into a rage because I wouldn't come out of the telly. Bad Dad Rejection 2 :(

Anyway, yesterday reminded me that although RDR2 is very beautiful, well-written, deep, huge and all the other things people say about it, where it really excels - for me at least - is as a strange, surreal horror game.

My favourite thing to do in RDR2 is just roam the land, with the vaguest of goals ("get to the swamp", "find a bath"), but make sure to let raw impulse take precedence over long-term planning at every turn. I try, essentially, to let my subconscious - my Id, if you like - play the game through me. Adding spice to this is the game's immensely complex and liquid control suite, where pretty much any button-bungling makes the cowboy do something, but it's often not at all what you're expecting.

I might decide it's funny to crouch down and follow a gentleman around, holding a lantern and muttering provocations until he finally snaps and decides to fight me. But then, whoops, out comes the dynamite. Eight seconds later, I'm strangling a policeman over the carcass of a horse. What adds a real dark humour to playing like this is how unpleasant and visceral RDR2's violence is. Smashing a bullet through someone's sinuses from a foot away, or jamming a hunting knife into the pebbly rubber of a turtle's neck, is genuinely harrowing - the fact it can all happen so casually, and with so little reason behind it, makes sessions play out like anxious fever dreams.

Indeed, over hours and hours of playing the game like this, I've come to think of the Cowboy as a sort of lost soul - a befuddled, reeking beast-man who was once perhaps well-meaning, but through endless acts of unthinking brutality, has become a kind of demon by default. He's forever trying to wander back to civilisation, and he'll get right to the cusp of rejoining the human race - but then he'll catch sight of a train in the corner of his eye, and decide to chase it and skin it. The cycle of blood begins again. Lovely stuff.