The game behind door number 18 of the RPS Advent Calendar is here to help. Probably. 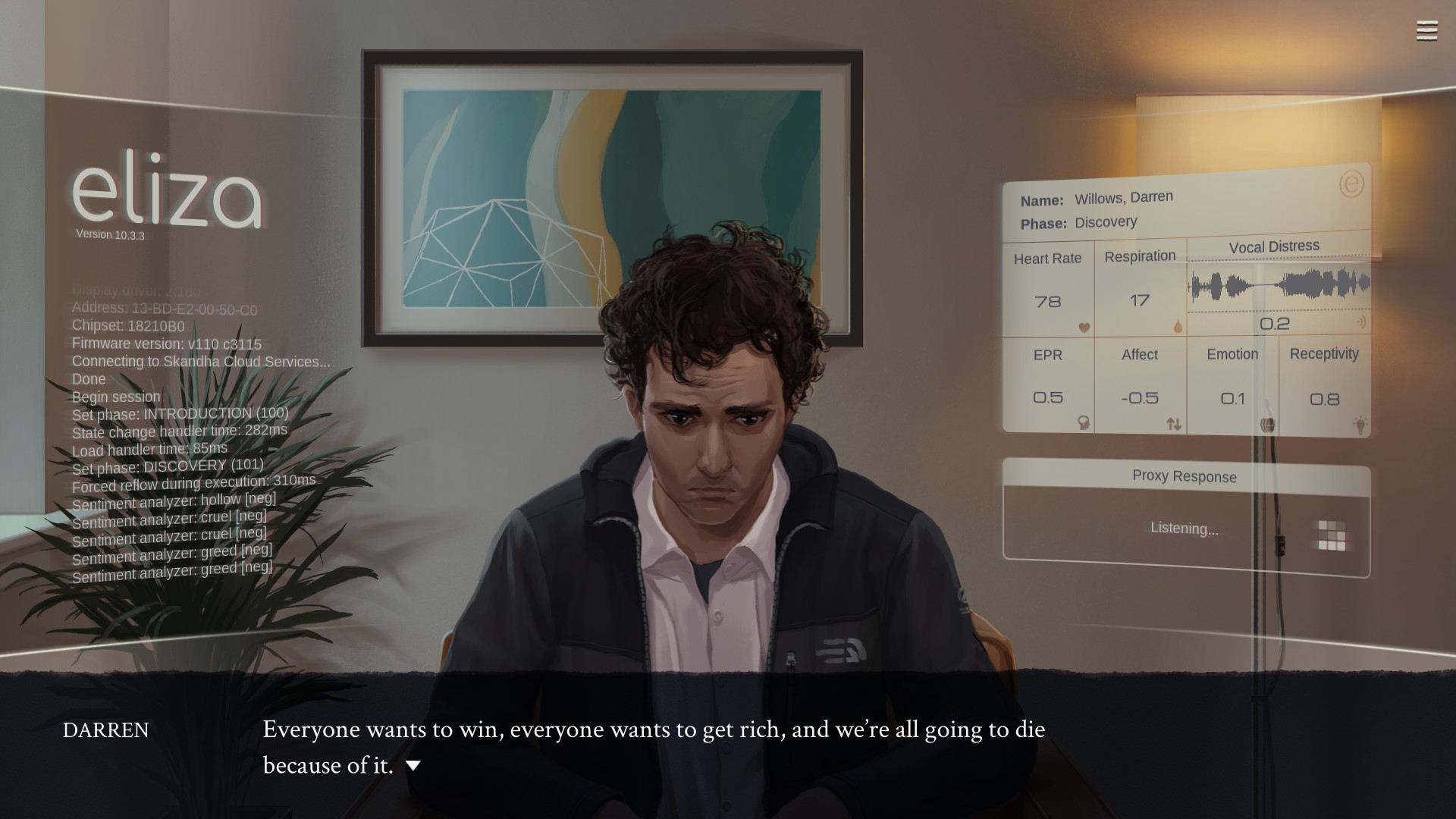 Matt: Eliza is a virtual counselling program. You play as Evelyn, who burnt out of her tech job and now works as a human proxy to deliver Eliza's computed therapy suggestions. At the end of the game, I abandoned my grand ambitions to change the world. Not because I thought no good could come from trying. The plans of tech giants like Soren and Rainer had their pitfalls and their privacy problems, but stemmed from a genuine and potentially achievable goal to improve people’s lives.

Neither plan was truly disruptive. They both treated their treatments as stopgaps, plastering over the broken society Eliza takes great pains to reflect. They might help people with their problems, but the root of suffering lies so often in the system, and always unaddressed. It’s not irrelevant that tech stands to profit.

The people you meet in Eliza have had their views and values warped by a world that doesn’t want them. Evelyn’s ability to recognise that, to provide a connection in place of an algorithm, made my final choice an easy one. It was clear which route she’d find more fulfilling, and clear that I’d never dream to deny it to her.

Eliza is a game about figuring out what’s important. By the time I’d spent three hours doing that with Evelyn, I cared most about what was important to her.

Sin: I've spent most of the last five days alternating between coping, and falling on the floor crying. I wish I was exaggerating. Eliza is about people like me.

This last year or so, I've been like Evelyn, committing myself again to the current of the world after years of isolation and grieving. That slow, invisible process of clotting and stitching and opening fearfully up to the world that let you down so badly before.

At my worst, like this week, I am like Darren. The one-off client who is simply too overcome with awareness of how terrible the world is, how bleak the outlook is for so very many people, for no good reason, to function without falling apart. Everything can be going fine but then suddenly you have to get the hell out of here, and try to run home, give up and collapse in the street 50 metres from your house, half hoping some passer by will save you somehow, half hoping you can just lie here until everything stops.

I've often felt like Maya, the anxious artist who half believes in her work but struggles so hard to like herself that it never sticks. She reminds me of a dear friend too, especially in one conversation she has with her friend that could have been taken straight from one of our own, years ago.

Once in a great while, at my very best, I've been like Nora. I've had my shit figured out and I've listened, and reached out, and been there to help someone else find their own way, without imposing mine on them.

Mostly though, I'm like Evelyn. Lost, but marking a path. Lonely, but needing solitude. Wanting to help people, but not knowing how, and being too wounded to support anyone else anyway. It hurts to know how much more you could be doing, if only you weren't hurting so much. But she's getting better. 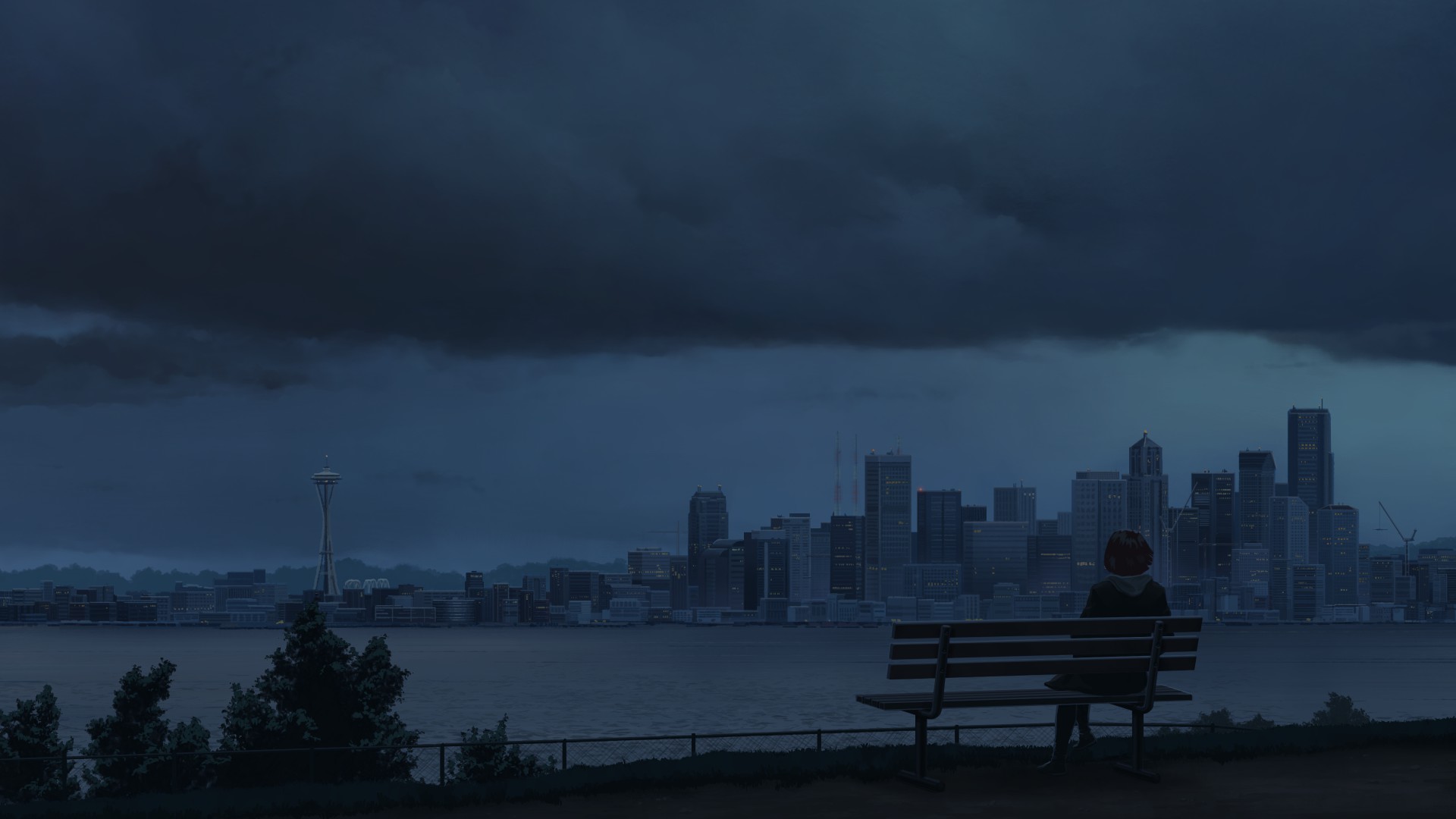 Evelyn reaches a crossroads at the end of Eliza, and it's up to you to decide which way she goes. Most of the time when visual novels ask for this kind of decision it feels very artificial. In Eliza, it feels right. This was always about Evelyn coming back to life and deciding what to do with it.

A few of the endings are, I think, deliberately absurd. There are no bad endings, but a couple are so contrary to the spirit of the story that if you choose them, it almost feels like it's taking the piss. They're technocratic solutions to problems that can't be solved by inventing the right toy or starting the right business. Magic potions given a science fiction spin. But the men selling the potions are part of the problem.

The other endings work for me. My dear friend Deborah went with the noble ending, in which Evelyn tries to take even more on her shoulders so she can help people. Classic Deborah. I admire that ending but I couldn't do it. My Evelyn had been through enough. She ran off with Nora. Friends, lovers, it's not made explicit and it doesn't matter. It was a decision to reconcile, to bring the best of her past into a new future, with someone who cared for her. It was a decision to get better.