Another day another door in the RPS Advent Calendar - day and door two, to be precise. Oh whoops, do be careful, the door is in a different place every time you open it. Oh no, now it's burning one pixel at a time. Who set this door on fire? And where did that acid rain come from? 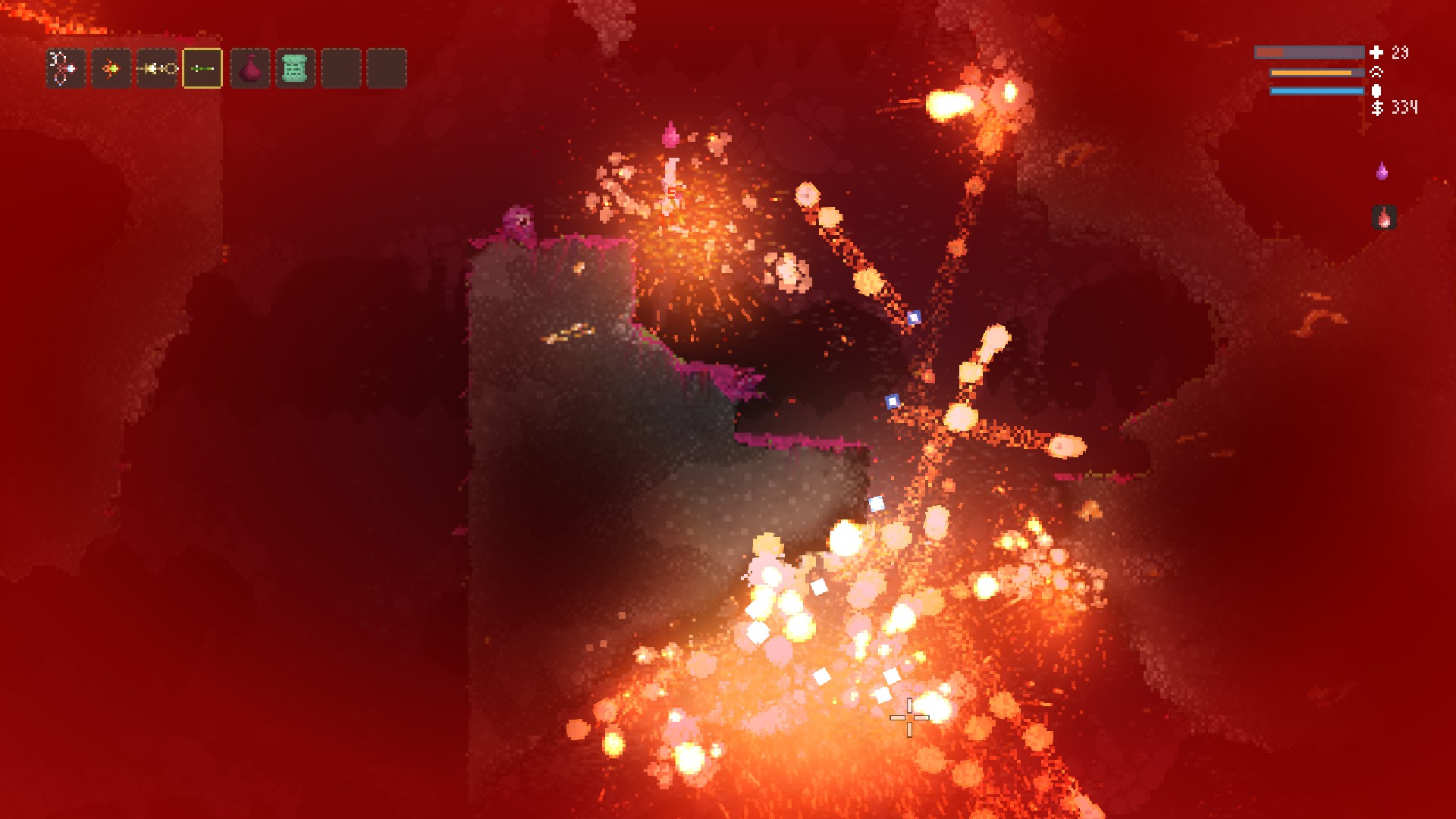 Alice Bee: Noita is an action-y roguelite. You, a small witch creature with a flappy robe, go down down, deeper and down through some nice proc gen dungeons. There are monsters. You find wands, and shoot the monsters with magic. Except! Every pixel is simulated. Every little bit in the game can act and be acted upon, to often spectacular end. Liquids pour. Ice shatters. Wood burns slowly, oil burns quickly. I am very bad at Noita, but Noita is very good.

Despite Noita's capacity for ridiculous explosions, my favourite thing to do with it is set off a slow reaction and see what happens as a result. It is a genuine joy to explore the limits of the Falling Everything engine, where lanterns drop from the ceiling, barrels explode, and sometimes you fall into a puddle of potion that turns you into a big worm with pincers. I do just, if you'll forgive me, want to watch the world burn. This is my favourite gif that I done in Noita, where I just set a wooden vat of acid on fire and grimly watched it split and pour its contents everywhere.

We picked it as our Can't Stop Playing game for October, and it is true! Graham has been playing it on his lunch breaks. The other day he found a wand that shot fireworks.

Graham: I do play it on my lunch breaks. Also in my evenings and on weekends. I have played Noita enough now to have advanced from "crap at it" to "so-so", but I think I love the game because getting better at it isn't required in order to see new things. Without special effort, I am continually discovering new secrets, new locations, new wands, new liquids - love those liquids - and each time I discover a new thing, the whole game becomes about that one thing.

Here's my current obsession: worm detective. Instead of heading right and down the mine from the starting area, head left till you come to a wall. Fly up until you find a branch with a nest and an egg in it. This egg contains a free worm! Smash the egg (which is about 6 pixels by 3 pixels, by the way) and your worm may arrive in one of three sizes: a small, pointless, disappointment; mid-sized; and 'ah geez that's terrifying.'

Anything mid-sized and above will carve tunnels through the earth as it burrows towards you or the next nearest pool of blood. Wait for it to start tunnelling downwards into the mines, and then use the paths it has made to follow it down from a safe distance. This is great for two reasons. One, because it creates new and interesting shortcuts. Two, because the worm will cause destruction wherever it goes, and so you can play detective in its wake.

The worm isn't invincible. They tend to end up dead somewhere near the bottom of the mines, but while pursuing one case yesterday, I couldn't find any dead worm. Instead, half the level was covered in a puddles of polymorphine, and there were half a dozen dead sheep floating on its surface. It seems that the worm had spilled a vat of the stuff and, as a consequence, been transformed into one of those fragile sheep, upon which it had been killed. Case closed. But start a new game now, because seriously, I can't stop playing this.

Sin: Yeah alright, roguelikes are bad, I hate fun, etc, etc. Noita is a winner though. It does a few too many things that irk or frustrate, and its extreme difficulty and roguelike structure fight its granular physics playground concept too much to fully win me over. But I whiled away more than a few afternoons with it, and with a few tweaks and a several decimals still left to go before its 1.0 version, it could well end up a bit special.