What could be behind door number 14? It's giving off a bit of a new, exuberant, optimistic vibe. There is a lot of very loud karaoke happening somewhere behind it, and it sounded like someone just got attacked by a crayfish.

Ed: This year I’ve spent most of my time with my beloved Kazuma Kiryu, having played through Yakuza 3, 4, 5, and 6 (maybe 3 was last year, time has lost all meaning) to round off the original series. After a tearful goodbye, I was worried that Yakuza: Like A Dragon’s new protagonist Kasuga Ichiban couldn’t top him. Turns out I was wrong, as I’m now totally infatuated with the guy; perhaps worryingly so.

Ichiban represents Yakuza: Like A Dragon’s new direction perfectly, I think. The previous games were a combination of beat ‘em up and action adventure, which dipped their toes into RPG territory, but never fully committed. As a result, it needed someone to push them over the edge. Ichiban, with his boundless enthusiasm, has positively Edge-Speared Yakuza in a brand new JRPG direction.

Yakuza: Like A Dragon is the most expressive, vibrant Yakuza of the lot, and Ichiban is the driving force.

Far from a plodding JRPG, Yakuza: LAD manages to capture the messy street brawls of past entries as strategic and snappy turn-based fights. The plot’s a compelling story of betrayal, suffused with hilarious side missions which involve escorting bubble-covered men to clothing stores, or tracking down mightily important crawfish. You’ll laugh, you’ll cry, and you’ll likely marvel at how pretty Yokohama is too.

Yakuza: LAD is the most expressive, vibrant Yakuza of the lot, then, and Ichiban is the driving force. He wears his heart on his sleeve, so much so that I’m surprised blood doesn’t drip off his cufflinks. There’s a reckless energy to him, in the way he plunges himself into Yokohama’s criminal underworld without a second glance, or doesn't hesitate to help out those who are simply struggling to get by. It lands him in trouble sometimes, yet it’s his willingness to make mistakes and learn from them that’s refreshing. I love Kiryu, but Ichiban feels more human.

Maybe my favourite thing about Yakuza: LAD is that Ichiban isn’t alone in his quest for answers. He’s joined by a band of misfits who each have their own stories to tell, and it’s wonderful bonding over drinks with them, or simply catching snippets of amusing conversation as you roam the streets. Plus, they happen to be pretty handy in a fight.

God, and I love all the different Jobs, LAD's take on classes, that you can assign to your party members. You can make them break dancers who deal damage by popping sweet moves, or hostesses who deal damage by popping bottles in peoples’ faces. Of course, you can also equip them with outrageous weapons like massive vibrators, ice lollies, electrified batons, and very long, rock solid sausages.

I could go on, but I fear I won’t stop. So now it is time for my shite elevator pitch:

You might be cosying up with your Cyberpunks and your AC: Valhallas. But think of Ichiban. He's cold and alone. During Christmas as well? How could you, how dare you? You want a JRPG that’s full of fun and heart, and where a monkey can manage your slew of businesses? Get Yakuza: LAD in your cart. 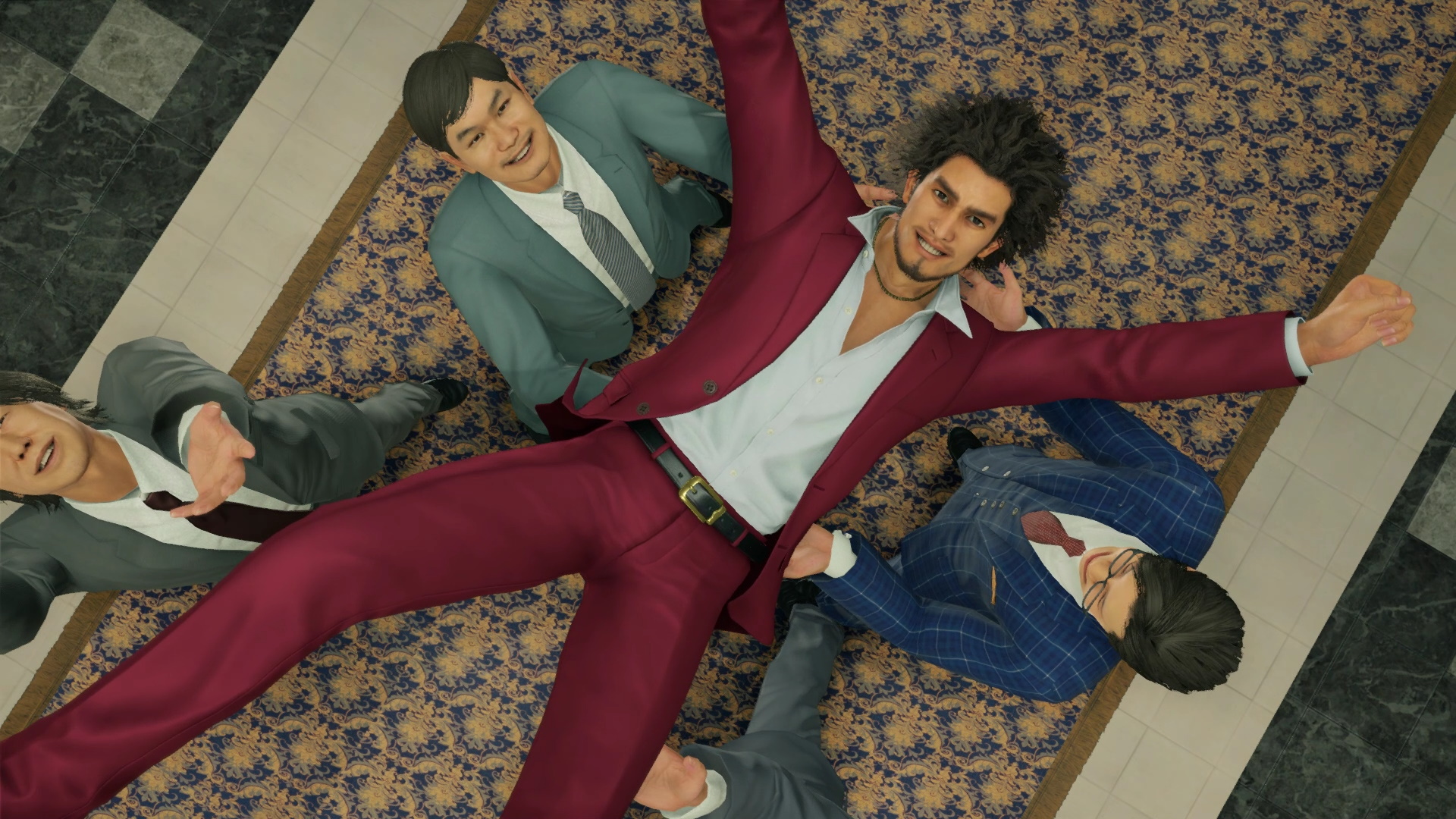 Colm: It’s wild that it all started with an April Fool’s joke. Unlike Ed, I was alright with replacing series mainstay Kazuma Kiryu, but the thought of slowing the action down to accommodate long, drawn-out battles was ridiculous. Top-tier 1/4/19 prank, Ryu Ga Gotoku Studio...

Then it was announced that RGG Studio was ditching the button-bashing in favour of JRPG-style, turn-based bust-ups. “Oh shit,” said Colm, c. a year and a half ago, “we got worked into a shoot!”

What a fool past me was.

Yakuza: Like A Dragon maintains the urgency seen in the series’ old combat, while also allowing for a much more measured approach. Being able to deal extra damage by quickly jumping on a downed enemy, or watching out for that small window to block a baddie’s attack, means there aren’t large sections of just waiting around during battles. On top of that, you’re able to take your time and pore over the long list of ludicrous abilities at your party’s disposal. And with Yakuza: LAD’s atypical classes, discovering what unlocked abilities look like in-game is always an absolute joy.

A change that isn't as apparent is the shift in the developer’s approach to story-telling. Yeah, the ridiculously long - and marvellously melodramatic - cutscenes are still here, but this isn’t a series about one gruff-but-lovable, sharply-dressed man anymore. It’s about a group of friends that will help each other out, no matter what. I’m not saying it’s a ground-breaking premise, but it’s hard not to get engrossed in this twisty-turny tale when you’ve characters like the cynical Nanba, the blunt Saeko, the roguish Adachi, and the outwardly-optimistic Kasuga. All of them are brought to life excellently by an English voice cast that doesn’t contain Michael Madsen.

Most of the new mini-games are alright, without being spectacular, and there is some late-game grinding that brings everything screeching to a halt for close to ten hours, so Yakuza: Like A Dragon may not be the definitive version of this type of Yakuza. It is, however, an exceptional way to start a new era.