The rhythmic chuntering of wheels on a track, the toot toot of the engineer's whistle, and the scream of a dying angelic host. There's a lot going on behind door seventeen of the RPS Advent Calendar, then. Easy to learn, but hard to master, one might say.

Imogen: Deckbuilding roguelikes are my weakness. I love RPGs, FPSs, puzzles and adventures, but nothing glues me to my seat quite like a deckbuilder, and Monster Train is no exception. It was one of those games where I looked at the title and thought, 'god, that sounds awful' - then I played it for seven hours straight and, well, it didn't make the title any better, but I realise how wonderful the game underneath it was.

The art style and animations aren't quite as slick as Slay The Spire, but it makes up for it with its complexity. On your Monster Train, you have to defend against enemies on three different levels, so you're constantly (constantly!) assessing where to place units to keep them alive (and demolish the foes invading). It's so much to think about, and often I find myself trying to plan far too many turns in advance. It's a wonder my brain hasn't exploded. I mean all this in a good way, because it's super engaging and I adore how clever it all is (and by extension, how clever it makes me feel when I win).

There's so much you can do to change your deck, too. Rather than bog-standard upgrades for everything, in between fights you can usually buy perks for your spell cards or units. Fancy turning a monster into a tank? Buy him some more health. Wanna make it so when a unit dies they come back endlessly? It's yours. Simply need a card to deal more damage? Done. This stuff makes every run so varied, and each build so different from the last.

On a completely separate but very relevant note, every time I load up the game all I hear is the late Matt Cox uttering the words "toot fucking toot." 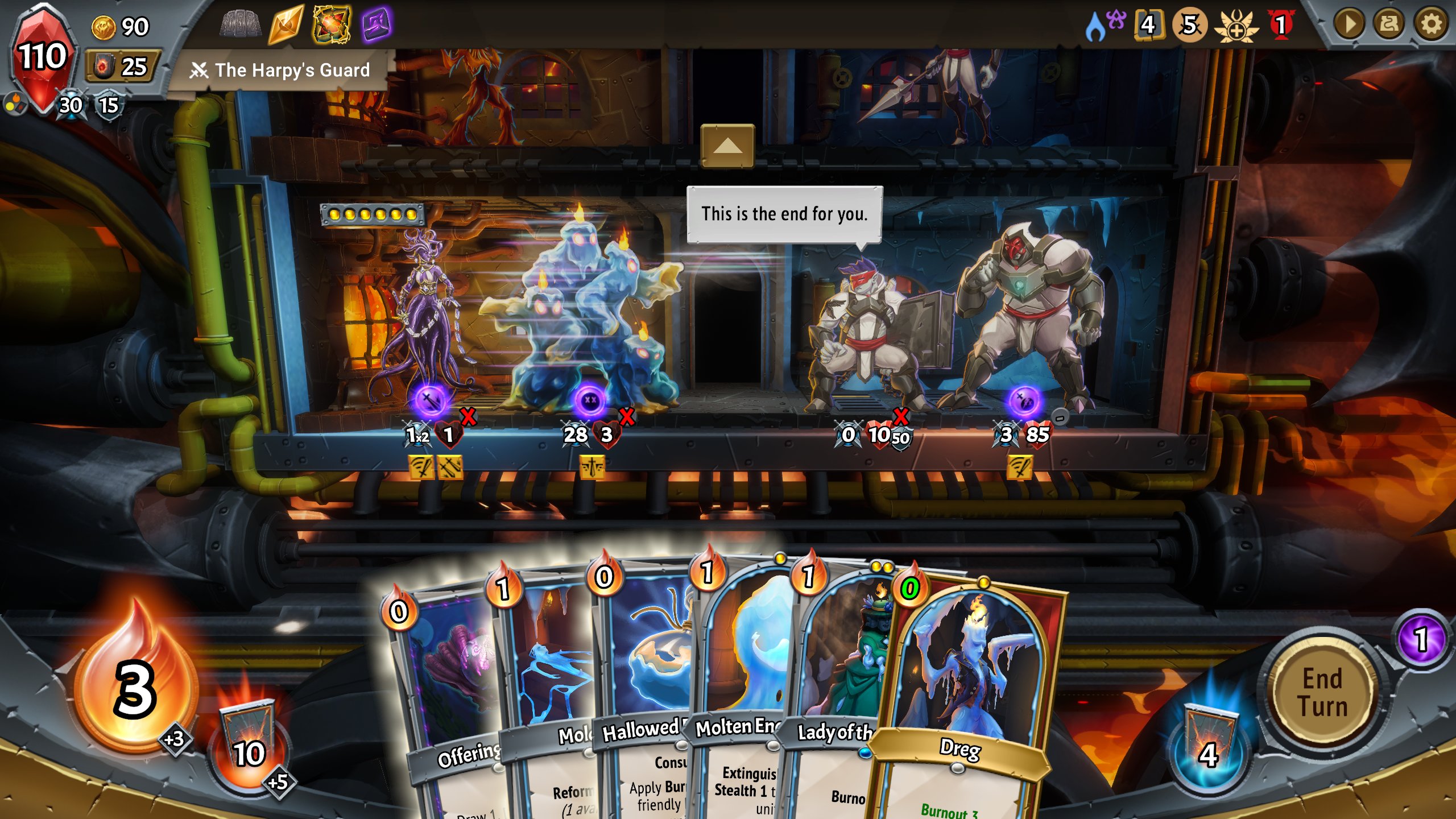 James: Card games and roguelikes are kind of my thing, too. After a lot of hours in Slay The Spire, the deckbuilding/roguelike genre combination is, as it turns out, a magic potion of sorts. Imagine my joy, then, when a deckbuilding roguelike was released in 2020 with five different clans to choose from and the ability to mix-and-match them to combine their powers.

Monster Train has you hurtling into the depths of hell on a train (of monsters), using your team's abilities to destroy the angelic army attempting to stop you. You’re given a champion of your primary clan, an extremely powerful unit you’ll want to build your deck around, and the chance to take out foes on your route through the nine circles. And though this may sound slightly complex, I’d actually say Monster Train is the most accessible and easy to learn game of its type. The effects are clearly explained, your mission is obvious, and the game even does the maths for you as to where your units will be after each round of combat.

You’re able to upgrade your deck with all kinds of sweet cards and effects too, along with myriad special events. In one run, I picked up a bunch of candles from some fella called Dante. The candles damaged my health total if I didn’t spend mana on them, but surviving a couple fights with them in tow meant Dante rocked up again and joins my team as a unit! He even gave me an artefact for my trouble - a passive bonus that applied for the rest of the run.

Everyone will have a favourite clan and champion, but some enemies and situations might inspire you to switch things up. Obviously, since the game has roguelike progression, every run is different, but you’re always making progress in that your understanding of the game is improving (and you’re unlocking new cool cards and stuff).

While it’s not most people’s favourite Hell-based roguelike of the year, I’m going to keep coming back to Monster Train. All kinds of new content has emerged, too (check out the new champions if it’s been a while since you dropped in). It’s super simple fun which is extremely tough to master - basically everything I want in a game to keep me entertained for a long time to come. 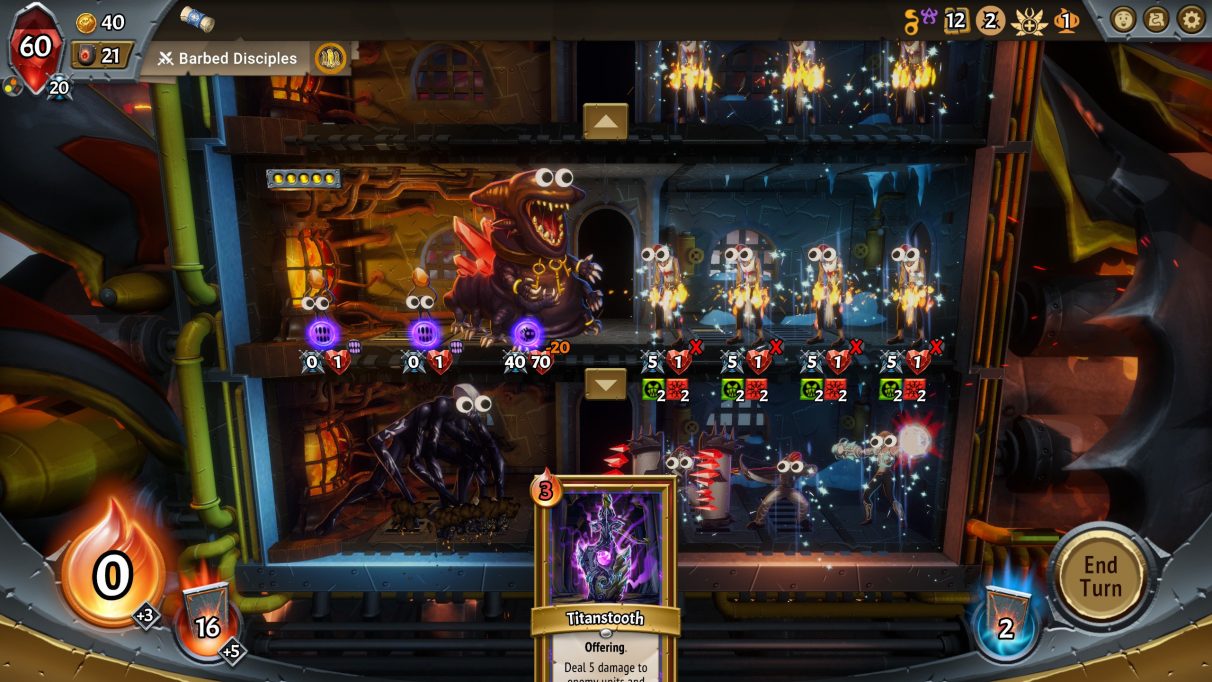 Alice0: I like Monster Train, a lot. Coming on the heels of Slay The Spire, it scratched a lot of that lovely itch with a twist (that's my signature move when itching). It's great. I agree with the things them lot ↑ said. But since they've already said them, I do want to gripe a bit: Monster Train's difficulty levels are bad.

Having conquered Covenant Rank 25, I really have played a lot. But as I climbed the ranks, it was rare to think the new difficulty modifiers coming on each level were challenging in an interesting way. Filling my deck with crap cards I'll want to remove as soon as I can is tedious, and makes future deck decisions and considerations less interesting. Biting huge chunks out of my starting health, likewise, strongly nudges me towards certain decisions. And giving bosses a squillion health points means only a deck which is really, truly broken has a solid chance at winning - so I sought those scant few combos. The difficulty system trying to railroad my decision-making process makes Monster Train less interesting. I mean yeah, I eventually beat Covenant 25 and felt great, but it's a stain on a great game.