There's a peep hole in door number 23. Look through it, what do you see?

It's What Remains Of Edith Finch!

Graham: You are returning home to a house from which you fled. You're in search of answers: what's the truth behind the family curse, which seemingly causes each member of your family to die, often young, in unfortunate, heart-wrenching and occasionally funny ways? You're the last Finch walking and you need to know. The answers will be found via the house's ornately modeled bedrooms, each of which prompts a vignette depicting the deceased's final moments.

The whole game is exquisite. The house is beautifully constructed, a masterclass of level design. It's simply wonderful to look at. There is only a single available path through its rooms, yet your discoveries feel your own. Every element is designed to communicate character. Storytelling by way of household objects and scribbled notes is not new, but What Remains' is built as carefully as a Rube Goldberg device. The clutter takes on meaning as you tumble through it.

Yet the vignettes take it beyond simply being Gone Homier. These are poetic and lyrical because the player is active within them, taking control of movement in a different way each time. Some are better than others, but all of them reflect and reshape the story you're gleaning from the environment.

The result is a game that deals with death with a lightness influenced by the works of Tim Burton, Wes Anderson, Bryan Fuller, but which has played on my mind every day in the month since I played it. In part that's because I'm still trying to work out exactly how much I like it. I suspect I admire it more than I love it. One of its stories reduced me to a bawling mess, but it was an easy target. Overall it shifts tones enough that I'm not entirely sure what, if anything, it was trying to say. I think its framing narrative is its weakest story, I didn't buy the ending, and ultimately I feel like it's not more than the sum of its parts... But when the parts hit the highs of What Remains?

Let's try this instead: What Remains Of Edith Finch makes me excited for the future of the entire medium of videogames.

Brendan: There’s a scene in Edith’s familial myth-history that will resonate with lovers of videogames. It’ll spark thoughts for anyone who has sought escape from a menial job in this dumb non-reality we all adore for reasons none of us can remember, probably the flashing lights. I won’t spoil any more because this is a game that’s best enjoyed as fresh as a flapping fish. 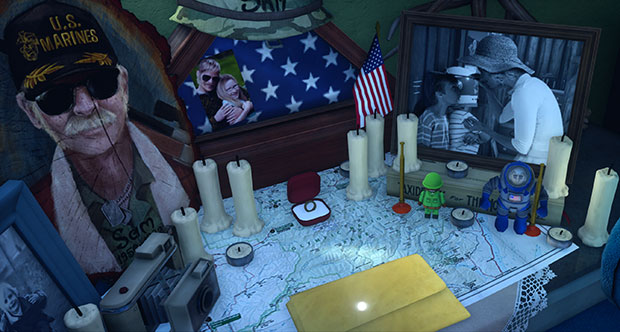 Alec: All hail the short game - the game that does all it sets out to do in just a couple of hours, then gets out of your way. Edith Finch goes the extra mile by packing in an almost obscene amount of environmental storytelling alongside its 150-odd minutes of wry tragedy and comedy, not to mention the wild abandon with which it introduces new ideas, control schemes and fever dreams every time it focuses on a new character. It's a game that lurks in the head for some time afterwards, and it's a game that is almost more satisfying on a second play, when you already know the tales of the wonderful, terrible, tragic, hilarious ways the various members of the Finch family died, and can now appreciate how all the little details predict and reference those stories.

And hell, the visual invention here, so much of which could sadly not be talked out for fear of spoiling the whole shebang, is off the charts. This is not some maudlin Gone Home knock-off: it's a feast of ideas, black humour and celebration of the power of stories.

Adam: I've written so much about it already, in our best PC games feature and in my review. Not as many words as I've written about games that I think are far less exciting or important, but enough to get my thoughts and feelings across. Graham says it makes him excited for the future of the entire medium of videogames and I'd agree with that. I'm more a systems and mechanics person than a narrative-lover when it comes to games, but Edith Finch made me a believer in this particular style of interactive narrative.

Perhaps I feel about it how everyone else felt about Gone Home, Firewatch, Dear Esther or The Stanley Parable. I like all of those games to varying degrees, but Edith Finch is the one that made me go, "OK, we've got this". And when I say 'we', I mean games as a medium, and when I say 'this', I mean everything.

Graham: I'm looping back in here after everyone else to point you towards some of our other reporting about Edith Finch from the past year. Specifically, if you've finished it, it's worth reading Alex's interview with the developers about the use of text in the game and Pip's interview with them about the art design of the section Brendan's referencing above. The latter also contains some great concept art and in-development images. As I've already said at length, the game is exquisite, and personally I found it fascinating to learn about how it was made after I was finished playing.

(Also we named it one of the best PC games ever.)