This is The Mechanic, where Alex Wiltshire invites developers to discuss the inner workings of their games. This time, What Remains of Edith Finch [official site].

The Finch house fits together in a jumble. The original building serves as a foundation for the floors that teeter on top and its rooms connect in strange and confounding ways, through hidden passages and external ladders. The whole thing looks like it couldn’t function as a building, a pile of timbers that’d tumble in a gale.

Yet, as I played What Remains of Edith Finch I found it making sense. Its rooms are fantastically detailed, and though their entrances can be through children’s playhouses and exits can be secret trapdoors, the game pulled me through. I was rarely confused or lost, and yet there are no quest markers or breadcrumb trails to follow. How What Remains of Edith Finch guides without pushing is simple, and yet complex. It’s all about:

THE MECHANIC: Signposting with words

So if you haven’t played it (you absolutely should play it), What Remains of Edith Finch is essentially a series of stories told through the house’s architecture and 30 different interaction schemes. They encompass being a tentacled monster hunting the crew of a ship, cutting salmon heads off, swinging on a swing and conducting a toy frog. And, just as the house has grown and evolved through its history, it’s also a game that developed through iteration. You can get a wonderful insight into that process in dear departed Pip’s State of the Art on how Lewis’ story was designed.

Playing What Remains of Edith Finch is a matter of constant exploration of the scattered remains of the family’s life through cluttered shelves and picture-covered walls in abandoned bedrooms, and also of controls and interactions: moving your legs to swing higher and coordinating your fingers so you chop better. And a big part of why What Remains of Edith Finch’s brand of exploration is so satisfying is because it makes you feel like you figured it all out yourself. The game never explicitly tells you where to go, what to look at, what to do, or how to perform any action. Instead, its signposting is about hinting where you’re going next and telling you that you’re doing the right thing.

“At every step the game is moving forward,” says designer Chris Bell. “At any point the player could start flailing and asking what happens now, so it was really important for every story to constantly have a sense of progression, having that narration there to catch you to say, ‘No, this way, come forward, you’re doing the right thing.’ It let people get comfortable with the controls and trusting that what they were doing was the right thing.”

“Players’ lizard brains are constantly concerned about where the end is,” creative director Ian Dallas adds. “Where the collision box is, or the trigger or the flag they need to progress and until that question is satisfied part of their brain is occupied. If you want them to stay in the bedroom and soak up that place, you need to answer those other questions first. It’s hard to concentrate on anything when you’re on fire. First job is to put out the fire, and hopefully then they can relax.” 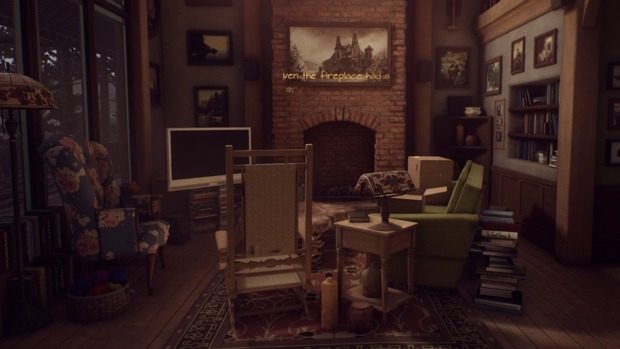 Dialogue that hangs in the air, as if it’s part of the environments, was already in the game, a major element in the way the game tells its stories. So, from an external perspective at least, it was obvious that Giant Sparrow could lean on it to help direct players. But I get the feeling that Dallas is on some level faintly embarrassed about using a solution so ostensibly crude, rather than purely through the suggestive magic of environment design.

“Yeah, unless we get too [ahead of ourselves] and pat ourselves on the back for having a game that eschews all the conventions, we were backed into having the text in the world as a really convenient stopgap solution for how to signal to the player all of the things we need to,” he says. Then again, he says it was the better alternative to having something absurdly gamey like floating coins to guide the player through. The simplicity and flexibility of words turned out to be a valuable asset in a world as visually dense as the Finch house. They were able to respond directly to areas where players were struggling to understand where they were meant to go next: add another line of dialogue and suddenly it made sense. 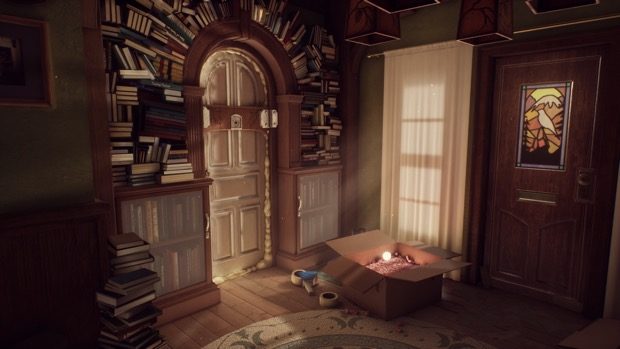 If Dallas is uncomfortable with text, he’s even more uncomfortable with the idea that the game is handholding players: “Like we’ve created a walkway in a slaughterhouse to lead the cows in the direction we want.” The final game has few places where dialogue is deployed when it notices a player isn’t progressing, a solution he describes as heavy-handed, because what he really wanted was a signposting system in which players are complicit, where the player and game want the same thing.

We all think we want massive, open worlds to explore at our leisure without the actual games telling us what to do. “We would have loved to have made a game with that freedom,” Dallas says. But, in fact, frustration lies in freedom. He noticed how players would wander into rooms in the Finch house that had no purpose any more and, without a minimap and waypoints to tell them what to interact with next, they were constantly backing into dead ends.

“We haven’t given you the tools to understand how the house works, and nor do we want to,” he says. “Chris did a great job of balancing tension so that players naturally go the right way, finding their way into the next bedroom. That’s a lot of playtesting and making subtle adjustments to encourage players to go in the way we actually both want them to go. Players want the new stuff, and so do we.”

A good example of this marriage of dialogue that tells story, gives feedback to the player that they’re doing the right thing, and is also part of play itself is in Gus’ story, in which you fly a kite above a marriage ceremony, triggering the next sequence by flying through the lines of a poem written in the sky. It helps indicate where you’re meant to be flying next, pointing your attention to what’s important, from the ceremony to the tent where the reception took place, and then embodying the storm that engulfed it.

It was one of the early stories where Giant Sparrow worked out how to design this bond between story, direction and play. “It’s very hard to find ways for the world to be responsive to your actions, and the text in the world was a great way for it to respond to you and make sense,” says Dallas. “We didn’t have the budget or the appetite for a lot of characters and have them react to you in the traditional way a game does, throwing moving bodies on-screen.”

Dialogue isn’t the only way What Remains of Edith Finch directs players. Interact-able objects such as the notebook on the desk that triggers to the next narrative sequence or the door knob that leads to the next location are equipped with little - and it pains me to use a word so vulgar - tooltips to help point your attention to them. Surprisingly sophisticated logic governs when they appear, all to keep focus on the world and story. “We wanted it not to feel like Assassin’s Creed or something with all those sidequest markers,” says Dallas.

So to keep players from feeling overwhelmed, the tooltips only appear when they’re relaxed enough that they’d welcome more information. Sometimes it’s gaze-based, only appearing if you’re looking in objects’ general direction. Sometimes it depends on you standing in certain places. In the ‘barracks’ area on the third floor, when you get up to Dawn’s crows nest room a tooltip appears on the picture of her father only if you walk past it enough that it’s behind you and look back. It’s placed there for players who have an interest in investigating deeper, and won’t bother those who want to be swept along.

Sometimes the tooltips only appear after certain events, such as in Molly’s room, where they’re shown once you’ve played her story (the one in which you play as animals hunting and eating their prey). Or, if you’ve played the stories of both Gregory (bathtime) and Gus (kite), and you make your way up to Dawn’s crows nest then the icon on the window that leads out will be visible from far away. But if you’ve missed the stories, then a tooltip on the fireman’s pole will become visible to draw you back down. Similarly, in the twins’ room, before you finish Calvin’s story (swing) you need to be very close to the secret exit for its icon to be visible. When you have finished the story, the icon becomes visible from across the room. “It’s to make it subconsciously easier for players to magically make their way through,” says Dallas.

“The little icons are some of my favourite things in the game now and they didn’t come in until a month before we finished,” he continues. On her last day working on the game, 2D artist Holly Rothrock did a last-minute pass on their animation, typifying the way What Remains of Edith Finch was built like the house it depicts. “They look like Play-doh or something, just really pleasant and I never get tired of them. Players see them over and over again; it’d make sense that they’re the first thing as a game developer you’d do, but you just don’t really know what you need until you’re so close to the end.”