Sundays are for doing things that are important and exciting and meaningful, but I will just be eating more crisps. And reading the best writing about videogames from the past week.

Actually, screw videogames, because Alice O shared something way better in our work chat earlier this week. Can you inscribe human nostalgia onto foreign DNA? So asks Regine in her fascinating piece about DNA digital data storage. As if that just being a thing wasn't interesting enough, the piece is specifically about artist Margherita Pevere, who has turned a childhood memory into the best horrifying gloop you or I will ever lay eyes on.

Pevere collaborated with bioscientist Mirela Alistar and the IEGT (the Institute of Experimental Gene Therapy and Cancer Research at University Rostock in Germany) to convert into genetic code a childhood memory of a woman who chose to remain anonymous. The genetic code was further synthesized into a plasmid which was then inserted into bacterial cells. The bacteria thus store the woman’s transient memory in their own bacterial body. Colonies of bacteria were then grown and cultured to create a large biofilm which, even after it had been sterilized, retains that childhood memory. 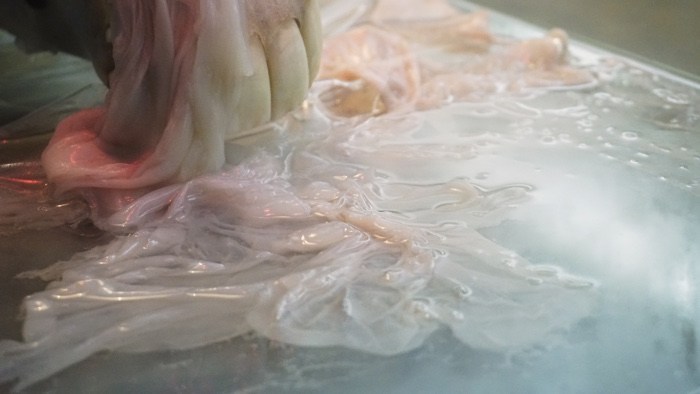 (And yes, I do also need to thank Alice for the revelation that it's possible to put images here. She filled in for me last week and did an infuriatingly good job, because she's Alice and of course she did.)

For Waypoint, Cameron Kunzelman covered Lichenia, a city-builder about “reshaping the natural and built environment, reclaiming dead cities, and growing sustainable ones.” It sounds about as great as Kunzelman's writing always is.

What’s special about Lichenia, though, is that your personal impact on the world is vague enough that you might not realize the effect that you’re having. A traditional city builder game tends to see any intervention as a good one: There was no road here, and now there is a road, which means that you can have houses, which are better than no houses. Lichenia has no such illusions about the universal benefits of intervening by plopping down tiles. The first time I played the game I accidentally drowned everything in sight by placing too much water on the way. In the next attempt, I’m pretty sure I flattened dense jungle to create stumpy beige ruins. Environmental experimentation is a two-way street in Lichenia, especially if you’re not paying attention to the effects of your previous actions. There are consequences here.

Here's a good and useful list from Stephen Johnson on Offspring, running through five Youtubers that aren't white men who you can introduce your kids to. Do your best to ignore the grimly ironic snippet of Ninja praise.

One of our readers emailed us with an interesting problem: He’s the father of three boys, ages 6, 10, and 12, and they love watching gaming streamers on YouTube, but all the gamers they watch are white dudes. Guys like DanTDM and Ninja make fantastic content that really connects with kids, but they do it from a white man’s point of view, and don’t represent the diversity that exists among people who actually play games. YouTube’s “recommended” algorithm offers little help, as it tends to serve up videos like the ones you already watch (in this case, more white guys), so I put together this list of five awesome game streamers who are not straight, white, men, but who are appropriate for kids.

For Wired, Will Bedingfield interviewed contributers to "r/iwanttoapologize", a wonderful collection of poetically stupid AI moments that has immediately become my favourite subreddit. Important reading advice: try to click the links without parsing them at first, then watch the embedded clips before you let the article spoil what's going to happen.

These clips, which players either engineer or come across by chance, are bizarre, silly and gleefully illogical. Their main attraction, though, is more than just their explicit humour. It derives from the deeper joke behind their existence: that developers and publishers have spent millions of pounds and thousands of hours to immerse you in a simulated world, only for some virtual elf to strum his lute improperly and confound the whole effort.

On his blog, Historian On Games, Seva wrote about the real history behind Return Of The Obra Dinn and why he considers the game's handling of non-white characters to be problematic. I don't know the extent to which I agree - like, I literally don't. I do know that I've never linked to an article here that has challenged my thinking to the same degree.

The truth is that these designations are constructed. Ethnicity, race, national identity, all these markers are contextual, based on who one is talking to, where and why. So, when Shamuhamedov spoke at the First Kyrgyz Congress hoping to convince the new government of petitioning the central Soviet authorities to delimit his village to the Kyrgyz, he was eager to underline his Kyrgyz identity. After all, he was currently living in the Uzbek republic, where he was discriminated based on his “nationality”.

This is what I wanted Obra Dinn to do – to highlight the vagueness, the shiftiness of identity, to muddle the boundaries between who was, for example, Indian and who was British.

One more stop on the history bus: Kate Willaert's looked into historic uses of the word gamer, and I'm very glad she did.

The term “gamer” predates video games by over six centuries.

The first known record of the word was found in the English town of Walsall and dates back to approximately 1422. The town’s Code of Laws, written in Middle English, condemned “any dice-player, carder, tennis player, or other unlawful gamer.”

Back then, even tennis and football were considered forms of gambling, and thus were banned on any day but Christmas. And then they banned Christmas.

I found Zack Zwiezen's Kotaku post about Sea Hero Quest so interesting that I tried to convince Graham to let me write about Sea Hero Quest, despite it being a mobile game. That's because it's a mobile game that's helping to diagnose Alzheimers in its early stages, which some cursory research suggests is super difficult. It turns out I'm not as persuasive as our PC games only rule, but hahaha I can do whatever I like here take that Graham.

According to researchers, every two minutes spent playing the game is equal to five hours of lab-based research. Because Sea Hero Quest has been out for a few years and downloaded and played by over three million players they’ve collected the equivalent of 1,700 years of research data on Alzheimer’s.

Physicist Rebecca Holmes wrote an excellent Aeon essay about her research into how human eyeballs can directly observe quantum weirdness. The parts I can't understand are almost as fascinating as the parts I can.

Using a single-photon source based on spontaneous parametric downconversion, and a forced-choice experimental design, there are now two possible experiments that could bring quantum weirdness into the realm of human perception: a test using superposition states, and what’s known as a ‘Bell test’ of non-locality using a human observer.

Insights into Slay The Spire's development are always welcome, especially when one of those insights is that the first main character was a stick figure drawing called hat man. Nice vid, people of Ars Technica.

A friend sent me this last week, an image so cursed that the internet's other cursed images now appear blessed. Turns out it's supposed to simulate how objects look when you have a stroke. (Edit: On reflection this is probably nonsense. Thank you, commenters.) I also enjoyed these responses.

Name one thing in this photo pic.twitter.com/zgyE9rL2XP

Music this week is This Thing by King Gizzard And The Lizard Wizard.