If you click on a link and make a purchase we may receive a small commission. Read our editorial policy.
It's Halloween! We've put the Hivemind Of Horror into a spooky jar of bubbling green liquid, and it'll be pumping horror-themed articles onto the site today.

Over a century has passed since the Kushan discovered the secrets of interstellar travel, buried beneath the crust of a backwater world. It is a fallow period for tales of galactic adventure. Having wrested their birth planet, Hiigara, from the Taiidan Empire, the Kushan have re-established their old clan households and embroiled themselves in petty rivalries. Homeworld: Cataclysm, a standalone expansion created by Barking Dog Studios, puts you in charge of one of these clans. It's a sidestory, but like many a “B-team” spin-off (see also, Black Ops), it gets at something weird and elemental about the mainline sci-fi strategy games. Homeworld, it turns out, offers a surprisingly rich foundation for horror.

Kiith Somtaaw, the clan in question, are not obvious protagonist material. They do not have the light of destiny about them. They are not great scientists and warriors, but small-time asteroid miners, with a tiny fleet and an equally tiny say over Hiigaran politics. Their clan mothership, the Kuun-Lan, is not a graceful crescent moon like that of the first game, but a beat-up, bulb-nosed tanker with a giant hangar bay that suggests a paunchy house cat. Were Cataclysm a “true” sequel, Somtaaw would be NPC escort fodder, fit only to pad out a mission or two en route to a plot point. They are not heroes, but they are still patriotic Hiigarans - and when they receive a distress signal from another clan, warning of a Taiidan attack, there’s only one possible course of action.

The case for Homeworld as a horror experience begins with the fact that, unlike the vast majority of real-time strategy games, it plays in three dimensions. Two decades since the original's release, and for all the genre's embracing of 3D models and backdrops, the RTS remains a resolutely planar affair. Perhaps spurred by the demands of esports, where immediacy and readability are key, it deals in firm borders, eagle-eyed perspectives, and a corresponding detachment. The world is a window, your minions the occupants of another dimension. You are focussed on what goes on there, but it doesn't exactly light up your fight-or-flight reflexes. 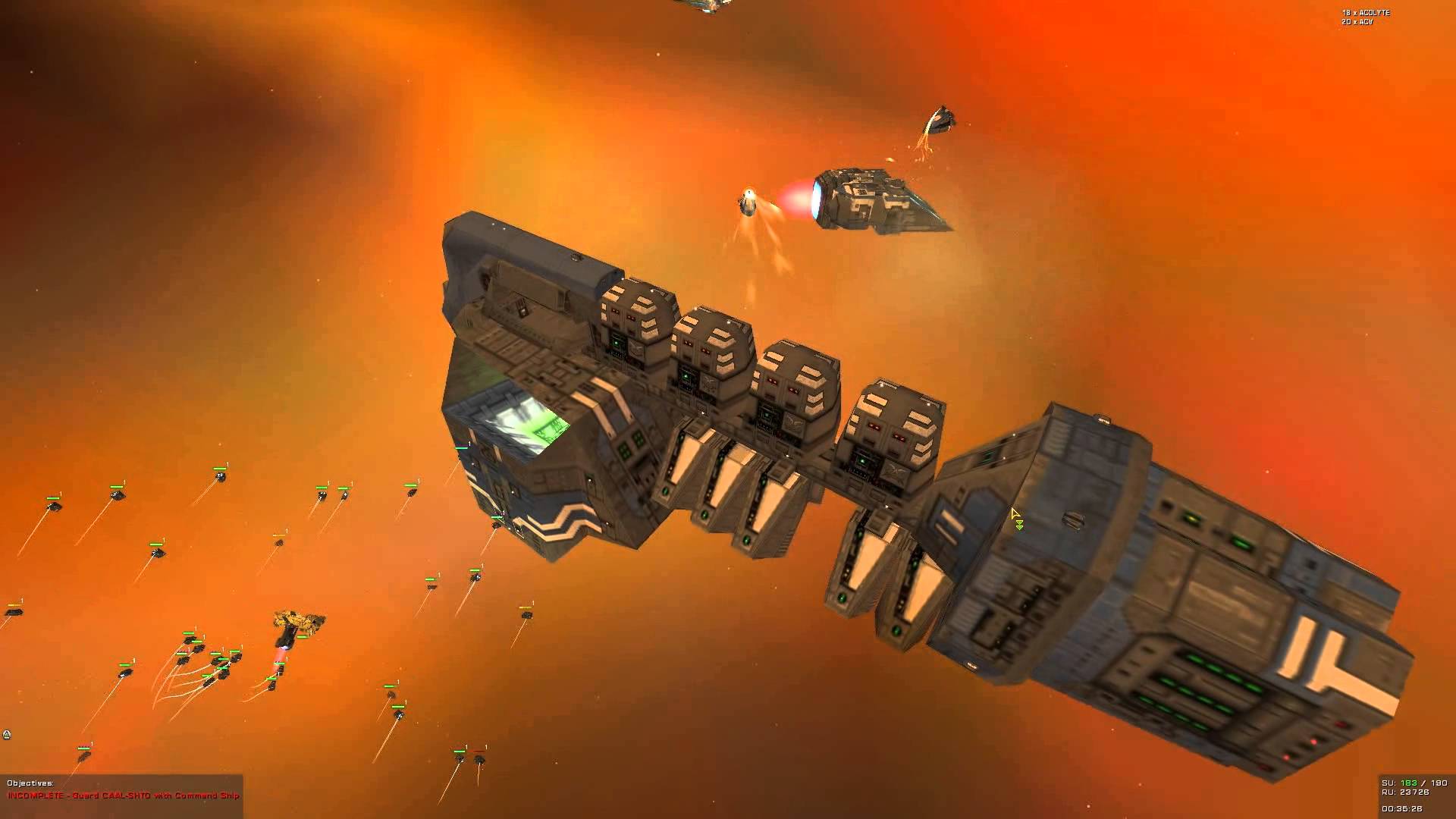 In a “true” 3D RTS like Homeworld, however, the player’s perspective is situated within the world. Unless you play through the whole game from the security of your zoomed-out Sensor Manager, it's possible for in-game entities to creep up on you, “inhabit” you, passing through the back of your skull and out of your eyes without warning. The terrain no longer maps comfortingly to the dimensions of a screen. It has become a measureless monster, everywhere and nowhere, hidden inside itself, in front and behind and lightyears away.

The battle with the Taiidan raiders only rubs in Somtaaw's insignificance. Lacking any warships besides fighters, you are kept on the fringe of the encounter, tasked with mopping up strays on behalf of more powerful Hiigaran vessels in the middle. After the fight is won, the admirals of Kiith Nabal broadcast their thanks to the other Kiith but leave Somtaaw off the honour roll. Instead, you are condescendingly asked to rescue another clan's drifting destroyer from an asteroid field. Once you've repaired it, the destroyer promptly jumps to hyperspace, leaving you to fend off ambushing pirates by yourself.

The destroyer's departure is Somtaaw's gain, however. Midway through the mission, the Kuun-Lan picks up a signal from deep in the asteroid field. The origin point proves to be an alien derelict, many thousands of years old. Should the Kuun-Lan notify another, better-resourced Kiith about its discovery? No, you are sternly instructed by clan elders back on Hiigara. The technology aboard the ancient artifact could give Somtaaw the edge it needs to break into the upper echelons of Hiigaran society. The Kuun-Lan is ordered to rendezvous with a science ship, the Clee-Saan, and analyse its precious find in secrecy.

Homeworld ought to feel overwhelming. That it doesn't is a credit to superbly intuitive controls and interface design. Your units are strewn throughout a colossal volume, dimly enclosed by bevelled neon cubes on the Sensor Manager screen, but it's still possible to box-select and order them about, much as you would tanks in Command & Conquer. Nevertheless, enough disorientation remains to colour the act of exploration with dread. In Homeworld, the fog of war is a literal cloud – not just a layer of interfacial dust, to be slowly wiped from the screen, but something that pervades and engulfs. Sending out ships to do recon or gather resources feels like reaching around in the dark with a cigarette lighter.

Combat, meanwhile, can be unpleasantly untidy. Attackers swirl through and riddle your nice, clean formations, challenging you to tell friend from foe. There is frustratingly little symmetry, next to the red-on-blue coherence of a C&C - hence the original Homeworld's working title, “Spaghetti Ball”, referring to the tangled engine trails of dogfighting pilots. 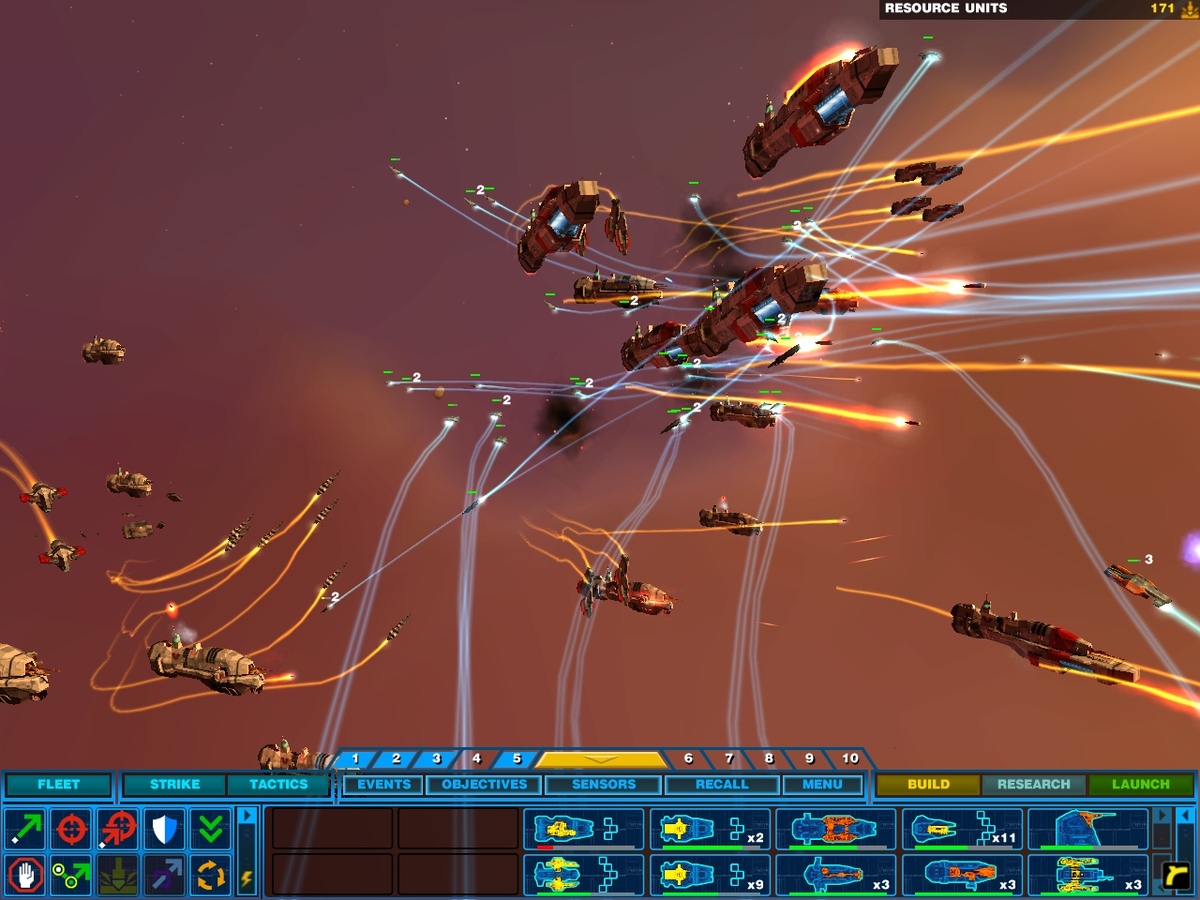 Even when the threats are manageable, they inspire a vague disgust for how they contaminate your position, getting in amongst your ships like plague spores. There is a touch of the macabre to Homeworld, as though the void were actually some kind of interstitial fluid and your fleet a bunch of organs and appendages, unprotected by a skin. In the original game, your Mothership is, in fact, the cybernetic body of a woman, Karan S'jet, who has her brain wired into its operating system to avoid the need for a gigantic crew. The Kuun-Lan lacks this somatic element, but the idea of ships as bodies is central to Cataclysm in far less pleasant ways.

You rendezvous with the Clee-San in the Tel sector, a quiet nook, well away from the covetous eyes of Hiigaran and Taiidan alike. The Clee-San's crew set up their equipment in the Kuun-Lan's hangar bay and start picking over the derelict. One of Homeworld's wonderfully ominous, hand-drawn monochrome cutscenes shows the artifact trussed up in cables. There's a fleeting glimpse of something organic, snaking along a wire.

As the mission begins, the Kuun-Lan bridge detects strange electrical fluctuations in the hangar bay. Your commander radios the lower deck for an explanation. A technician mumbles a confused response while in the background, you hear a deranged liquid outburst, as though groups of people were screaming and puking simultaneously. As the camera pivots, you see a mass of boiling scarlet erupt from the Kuun-Lan's underside and begin to seep across the hull.

Abruptly, somebody shrieks at the bridge to jettison the hangar, to cut loose the affected sections before it's too late. The commander hesitates for only a second, and the whole lower deck – around half of your mothership, housing the entirety of your fleet construction facilities – goes spinning off into the void. You are left broken and running on emergency power, obliged to gather materials and patch up the Kuun-Lan before you can move, and worse is in store.

Accompanied by a fighter squadron, the Clee-San sets off to investigate the stained, sloughed-off chunk of your mothership. As they approach it, a line of violet light leaps out and licks each vessel's hull. Your fighters twist, reddening, in the beam. Then they turn and aim their weapons at the Kuun-Lan. Over the radio you hear a guttural, polyphonic whisper: we live. 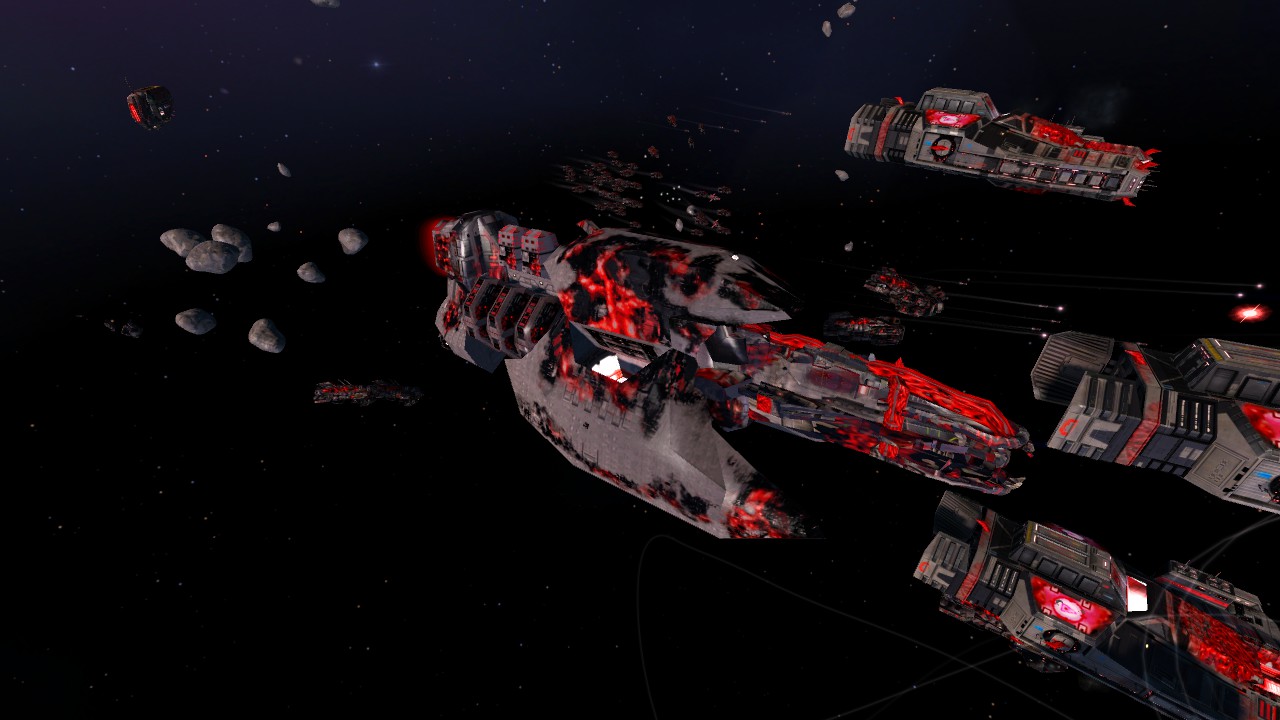 The Beast, a biomechanical virus that digests and rebuilds whole ships and their crews, is Cataclysm's major antagonist. On paper it's just the familiar sci-fi cliché of the corrupting hive-mind, a near cousin of Starcraft's Zerg and Halo's Flood. What distinguishes it from these more celebrated infestations is how it exploits Homeworld’s spatial dynamics. The Beast is frightening, more frightening than its planet-based equivalents, because it is at home with Homeworld's lack of boundaries. Allow it to breach your space, and it won't just annihilate your ships but possess them. This is a particular problem for your mothership, the huge, lumbering brain around which your entire experience of the game revolves.

Homeworld’s motherships aren't just all-in-one mobile factories, carriers and research hubs. They are anchors, a means of imposing coherence. “[The motherships] were these giant things visible almost all the time,” Rob Cunningham, art director for Homeworld 1 and 2, explained to GOG in 2017. “So we designed them as basically a giant tall tower and a huge flat slab to always show the player 'this is up/down and this is flat' at a glance.” One consequence is that the prospect of the mothership's loss feels like an assault on the possibility of knowing and navigating Homeworld's cosmos. Kill or corrupt the mothership, and you tear out the concept of place itself. There is no longer any centre of gravity to work with.

Admittedly, Cataclysm pulls its punches with the Beast. Larger ships are resistant to its touch, capacious enough that there's time to purge affected modules (at horrible cost) before the entire vessel is reduced to squirming meat soup. But this isn't made plain for a while, and in the meantime, all the stress of positioning yourself within Homeworld's ravenous darkness bursts into flame. Beyond the game's spatial dynamics, there's a simple but satisfying psychological component to the aggressor. The Beast mothership, which grows around the inverted spine of the Kuun-Lan, is a manifestation of Somtaaw's desire for power and status. It is the clan's id decoupled from its ego and left to run rampant.

In practice, Somtaaw's sheer unimportance proves the key to its victory against the Beast. Rather than hunting you down, the creature initially targets more powerful Hiigaran and Taiidan fleets for assimilation. It also goes after the Bentusi, a mournful elder civilisation of nomad traders who, like Karan S'Jet, are woven into their own ships. 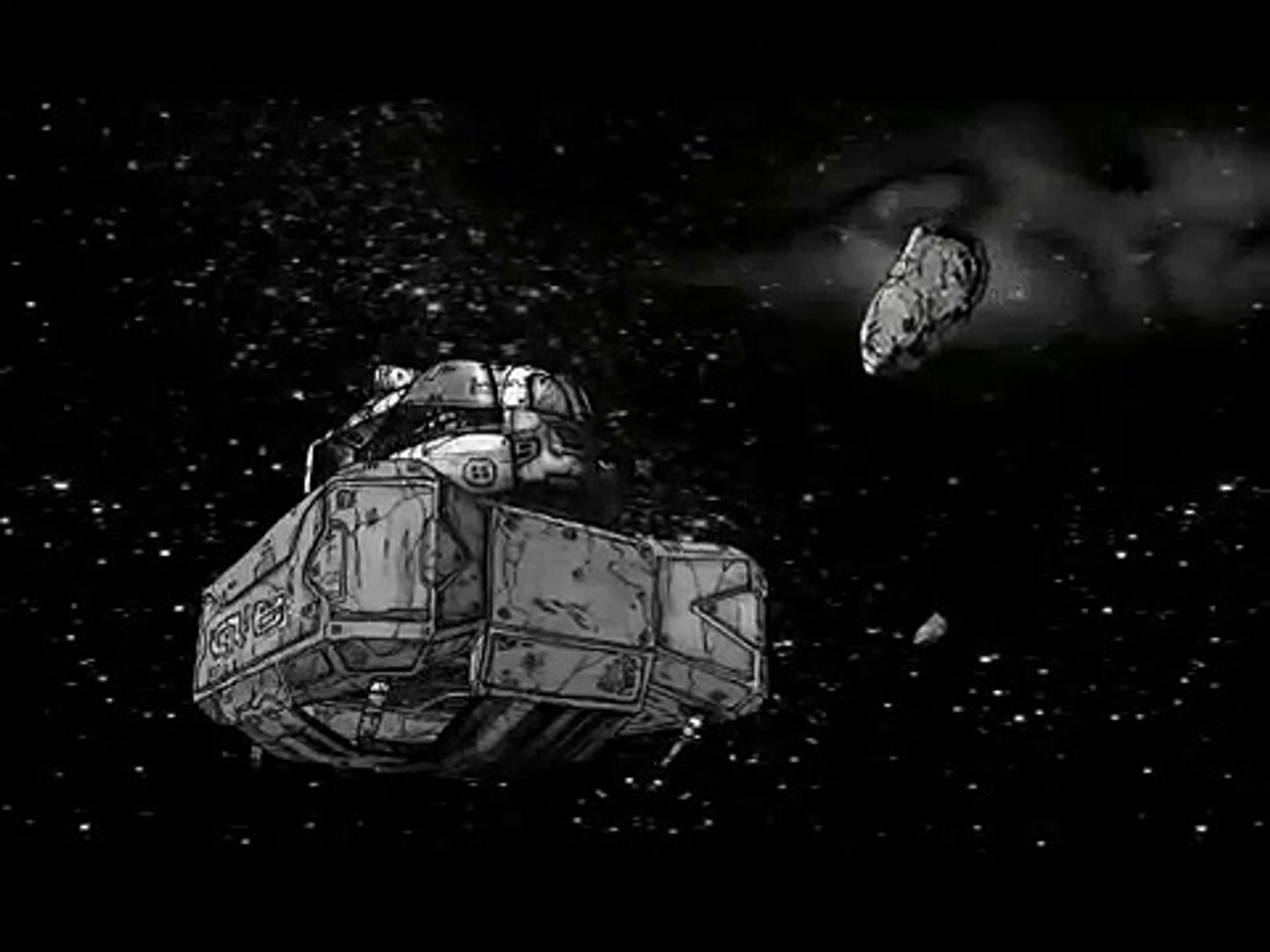 The Bentusi are terrified of the Beast because for them, infection means not just death but an eternity of conscious enslavement. Rather than engage the threat, they opt to flee the galaxy via wormhole, abandoning the younger races to their fate. This gives rise to one of the most desperate missions in Cataclysm. To enlist the Bentusi's aid in researching a counter to the Beast, you must interpose the Kuun-Lan between their highly advanced vessels and the wormhole, allowing them to decimate your fleet till at long last, you shame them into standing down.

The Beast's lack of regard for Somtaaw allows you to spend much of the campaign researching and constructing new warships and technologies. By the last few missions, that gaggle of rock-haulers has become an irresistible armada of carriers and destroyers, backed up by corvettes and frigates. The Kuun-Lan is now a siege cannon, able to knock out an infected target in one shot from thousands of kilometres away. Kiith Somtaaw has won the prestige it hungered for. And in the process, it has exposed Homeworld for a ripping horror yarn waiting to happen. What other terrible possibilities remain to be dredged from this void, and can any of them be more terrible, in the end, than the void itself?