Few games have aged as gracefully as Homeworld. Even without modern enhancements, Relic's 1999 space opera RTS is still a looker, carried by sharp ship designs, low-fi but evocative audio and some gorgeous nebula backdrops.

That's not to say there isn't room for improvement; between Gearbox's Homeworld Remastered Collection and a fresh wave of interest in the upcoming sequel, modders have been returning to their old stomping grounds. While the engines of space-war haven't yet hit fever pitch, let's take a peek at what modders have done so far with the remaster.

As with most modern releases, installing mods for Homeworld Remastered is easy, and further simplified if you have the Steam version. For the sake of simplicity I'd recommend that edition, with its Workshop integration, but if you've got the GOG edition you can find most (if not all) of the mods featured below mirrored on Mod DB. The only technical issue I've encountered is that the game's integrated mod launcher can get a little slow and potentially unstable if you've got a ton of mods installed, so stick to a handful at a time.

The individual mods should have specific instructions for installation with the GOG version, but most will just ask you to unpack their mod directory to your Homeworld Remastered\HomeworldRM\DataWorkshopMODs directory, then use the built-in launcher to activate the mod. 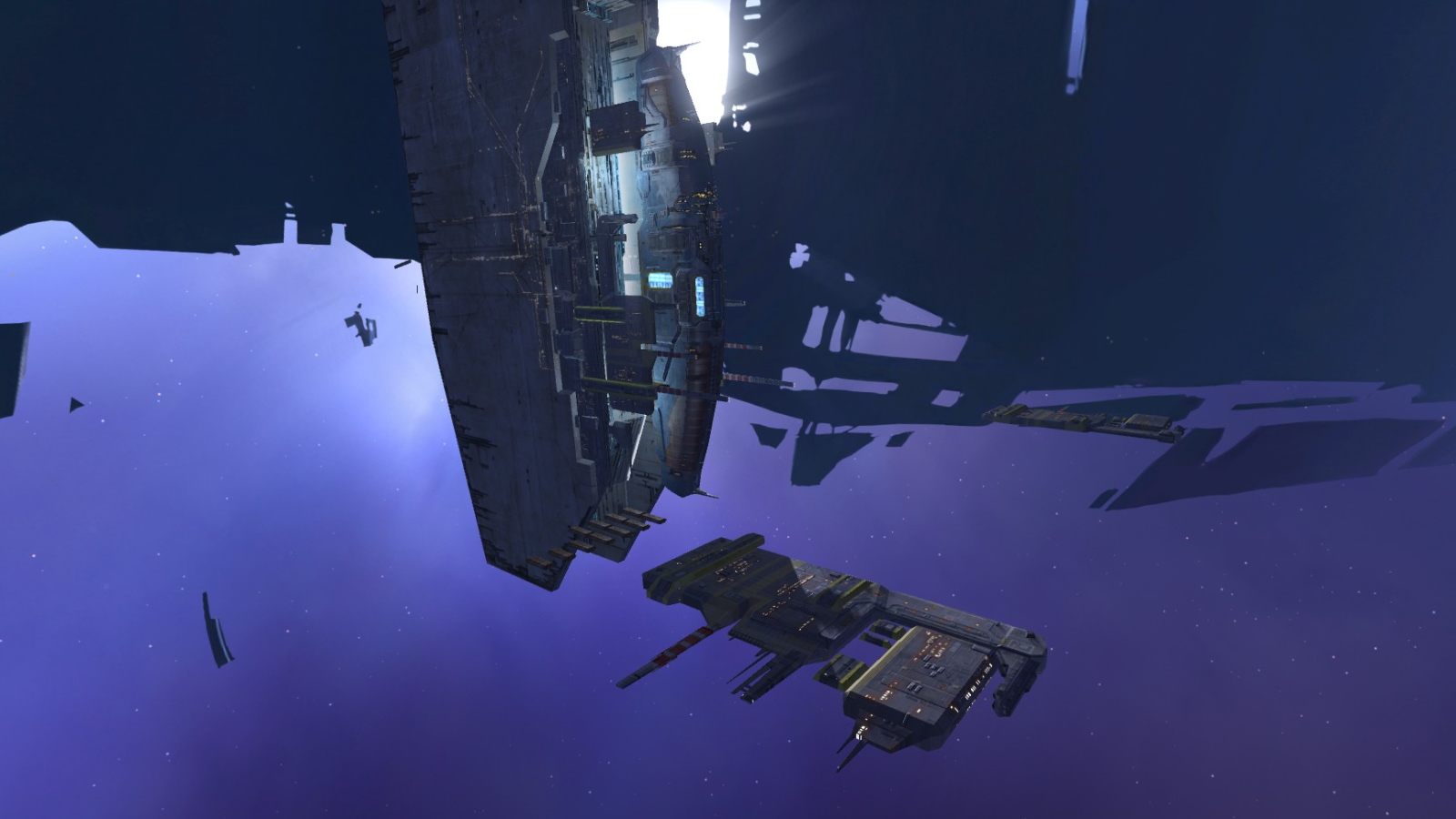 This is the first port of call for anyone returning to Homeworld after a long absence, or new players wanting the best version of the game. Gearbox's official v2.0 patch addressed many of the outstanding complaints with Homeworld Remastered's balance tweaks, but it was still imperfect. While there have been several attempts at unofficial patches, this one - a huge community effort with many contributors - seems the most comprehensive, fixing old bugs, fine-tuning balance and adding new quality-of-life features in equal measure. Old exploits have been closed off, and mission scripting has been polished up.

With this mod you can tweak difficulty levels on a per-mission basis, which helps with the nasty difficulty spikes in Homeworld's campaign. It also adds some fun new variant ways to play. You can see the extensive change and features list here. It's still being actively supported, with the most recent update (at the time of writing) being on December 16th.


Universal nerd-law states that if a game featuring space battles is moddable in any way, someone is going to turn it into Star Trek. Originally for classic Homeworld, Star Trek: Continuum warped over to the Remastered Collection relatively early, and has been trucking along at impulse speed ever since, with the most recent update landing in November. What you get is a massive skirmish and multiplayer sandbox covering a swarm of factions (everything from the Dominion to the Gorn, Borg and even the goatee'd mirror-universe evil Federation) across multiple time periods, and a very customisable rule-set.

While geared towards multiplayer and skirmish, there is a basic single-player horde survival mode. While it's wildly unbalanced, it's a fun distraction and a test of just how hard you can push Homeworld Remastered. Expect a lot of noise and chaos as increasingly dangerous waves of enemy ships warp into the centre of the map. Every kill earns you more money, and ships are constructed instantly in this mode, so single-unit spam is a viable strategy. I didn't think a spaceship could look afraid until I saw over a hundred torpedoes chasing a single Klingon cruiser. 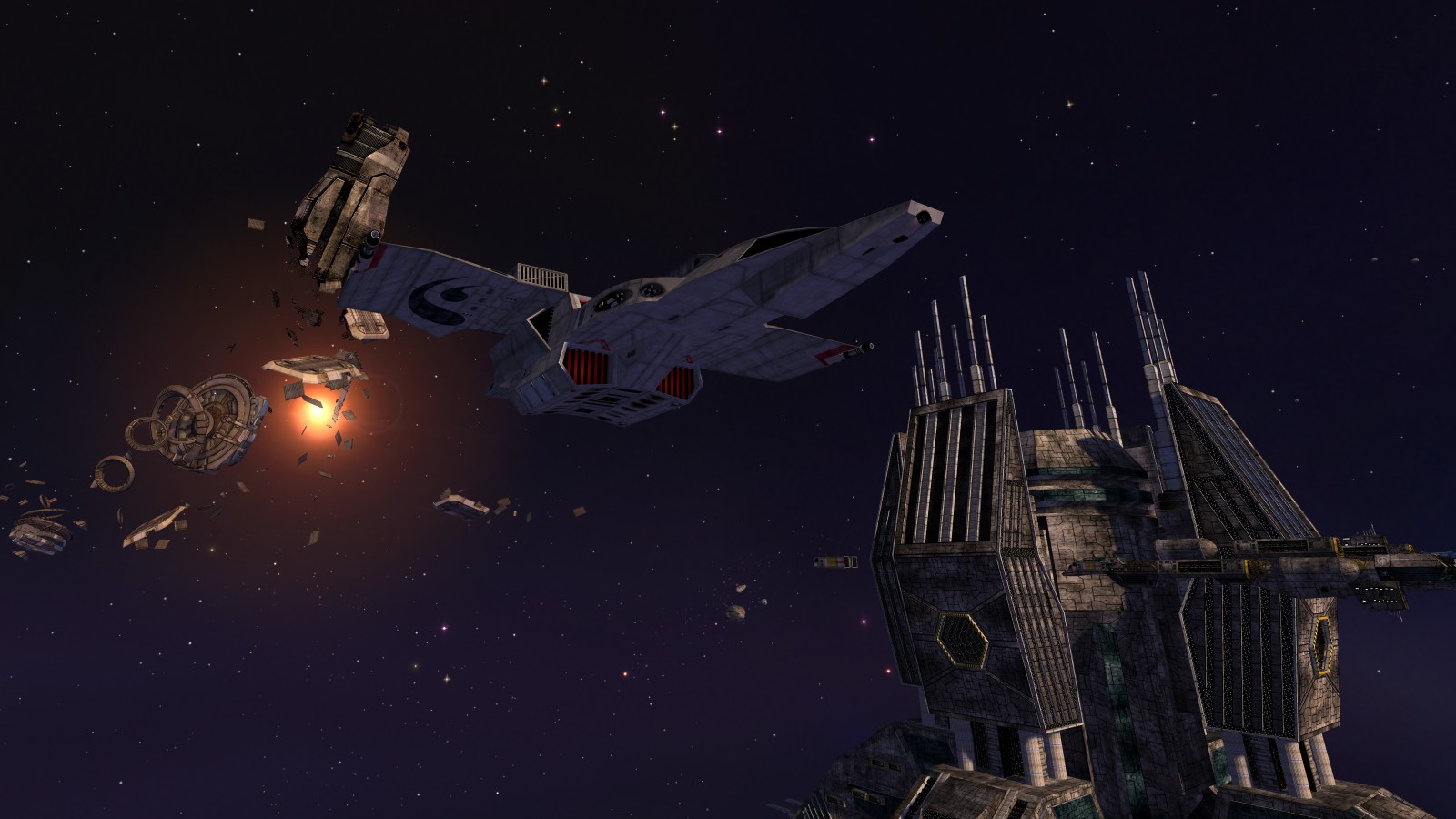 There's a certain low-fi charm to the Wing Commander series and its universe of small-scale dogfights and tense capital ship encounters. Those two elements are well represented in this total conversion mod. Flag Commander might share most of Homeworld's interface, but the combat has a feel all of its own. Slower escalations in hostilities, fighters with limited travel range, carriers that are nigh invulnerable to anything but torpedo-carrying bombers (with limited ammo per deployment) and frequent opportunities to disengage and withdraw. In short, it feels like Wing Commander.

This authenticity to the source material carries through to a fistful of single-player missions. Recreating notable battles from Wing Commander 3, this small introductory campaign has no base-building or resource gathering, just a fixed battle-group with limited resources. A bit on the easy side, but a fine introduction to the tactical side of this mod. In skirmish and multiplayer, military manoeuvres are as important as resource hoarding, and players can make a lot of money by hunting roaming NPC freighter convoys, further fitting the setting.

Development is ongoing, with the last wave of updates landing this September. There's another era and set of units planned yet (from Wing Commander Prophecy),  additional solo missions in the works, and more besides. It might not have low-budget cutscenes featuring Mark Hamill, but this is a fine reason to return to the Wing Commander universe. If you'd rather get in the cockpit yourself, check out my earlier Freespace 2 roundup for an especially good dogfighting fan-game.

An understated name for a massive project, FX: Galaxy is possibly the closest Homeworld has seen to an unofficial expansion. Developed by Chinese mod collective 9CCN, they've been hammering away at this one since the early days of Homeworld 2, and it shows. Set in a slightly expanded (but still largely canonical) Homeworld universe, eight factions are now bulked out into fully playable forces. Old ships have been redesigned, entirely new craft have been added to fill gaps in rosters and everything is especially nice to look at thanks to a pile of new particle and lighting effects.

FX: Galaxy features one of the bigger and better fleshed-out single player offerings of any Homeworld mod. There's a trio of new scripted missions that capture the spirit of the original game, thrusting you into increasingly dangerous situations and forcing you to adapt your forces to counter. There are also several distinct challenge modes, including a 33-stage escalating series of battles against AI, plus two distinct survival modes. Bentusi Defense is straight-forward point defence, but The Legendary Fleet is a more complex, messier encounter where you can call in special veteran units from a bespoke menu (assuming you have the resources for it).

As impressive as this all is, it's utterly dwarfed by the ambition of the 9CCN's next planned feature. If this development blog on Mod DB is to be believed, they've got an RPG-tinged dynamic campaign in the works. While I've some doubts that this mode will ever see the full light of day, there's plenty to see and do in FX: Galaxy already. A must-play, even if you're just dabbling in solo missions. 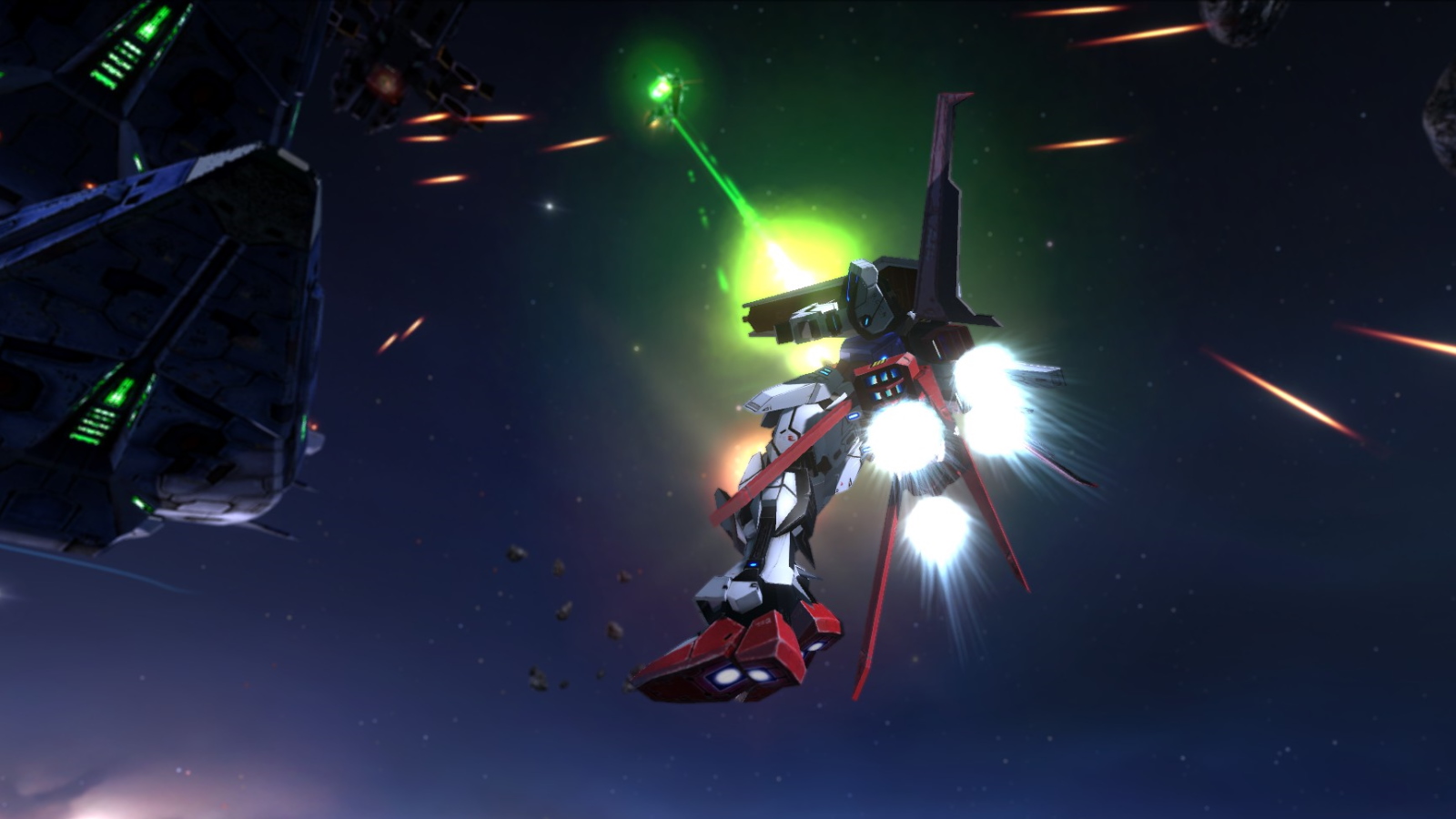 I do reckon that 9CCN might have a chance of getting that RPG mode off the ground, as FX: Galaxy isn't their first rodeo. Not updated in a couple years, but a good showcase of their earlier work, is Gundam SEED Remastered, based on the more middling iterations on the eternally rebooted mecha anime, but it was rich in large-scale space battles. The team did a fantastic job with the segmented and animated ships and mobile suits, with Gundams twisting arms and legs to orient themselves and their guns in the middle of a fight.

Balance-wise, I'm not a huge fan of this mod, but I can't deny that it's authentic to the source material. While mass-produced units get chewed up by the dozen, the initial prototype Gundams (only a couple allowed per side) are nigh invulnerable. It's fun to watch a pair of mechs dancing around each other in the middle of a battle, dozens of cannon shots and beams narrowly missing their mark. Spectacular, even if it is a little bit frustrating to see five minutes pass and a single enemy unit still alive. 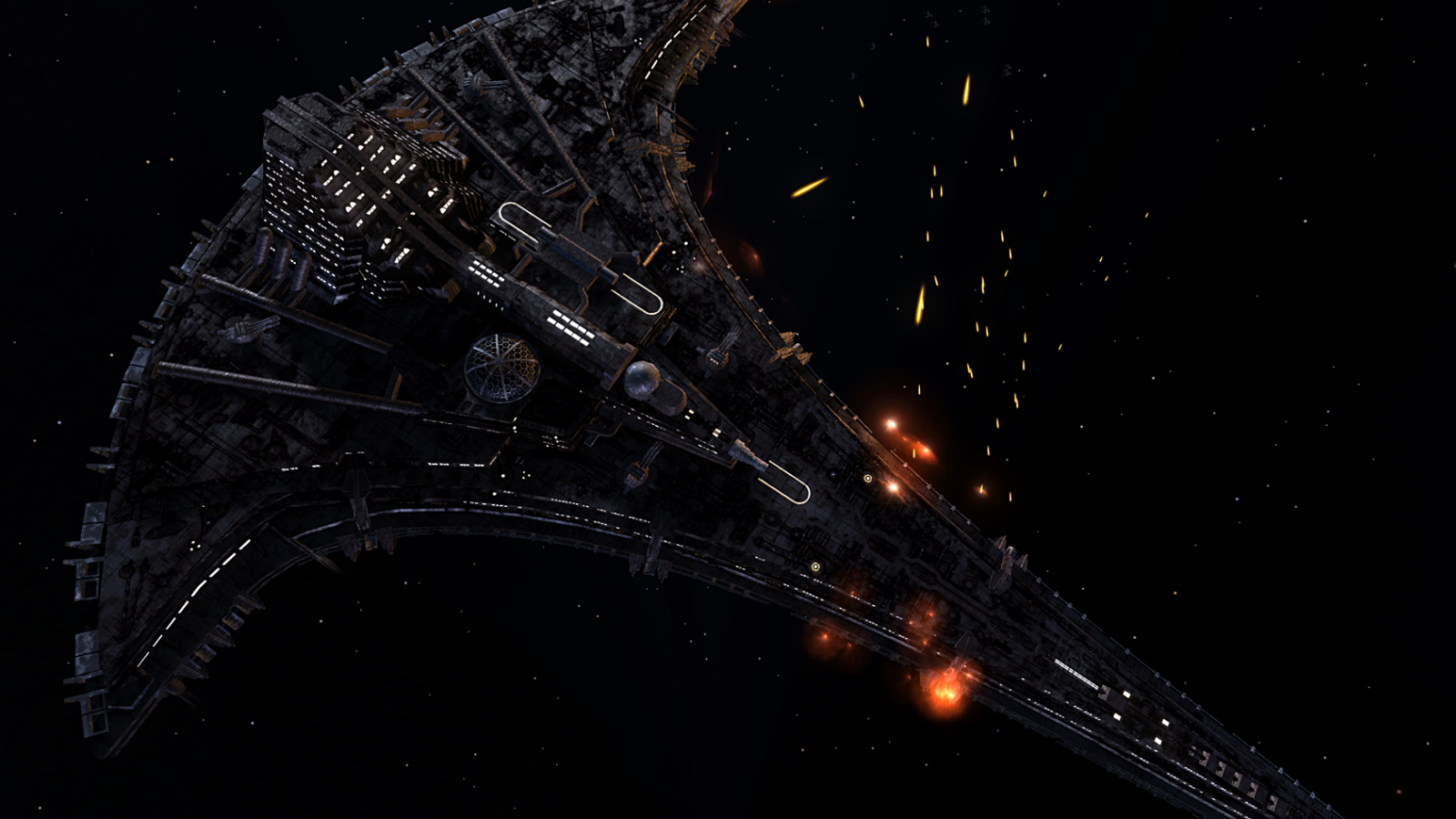 As for the festive ghost of Homeworld future, there are a lot of big projects just on the horizon. Veteran modding outfit Phoenix Interactive are gearing up to launch three total conversion mods in the new year. Battlestar Galactica: Fleet Commander, Mass Effect Reborn and Stargate: Space Conflict. While older builds of these mods are available for the original game, the remastered versions appear to be a far more ambitious set of productions, with the Stargate mod promising a scripted campaign with voicework lifted (where appropriate) from the TV show.

While threadbare, only partially functional and long out of date, there's an early demo of Stargate: Space Conflict here on Steam. If nothing else, it features some flashy UI work, wholly replacing Homeworld 2's main menus. Phoenix aim to get the first wave of Stargate remastered releases out January 2020, followed by Mass Effect sometime in June, and Battlestar out by the end of the year. Is three total conversions in development too much for a single team? Probably, but I'm excited to see how the Stargate launch early next year goes, if nothing else. 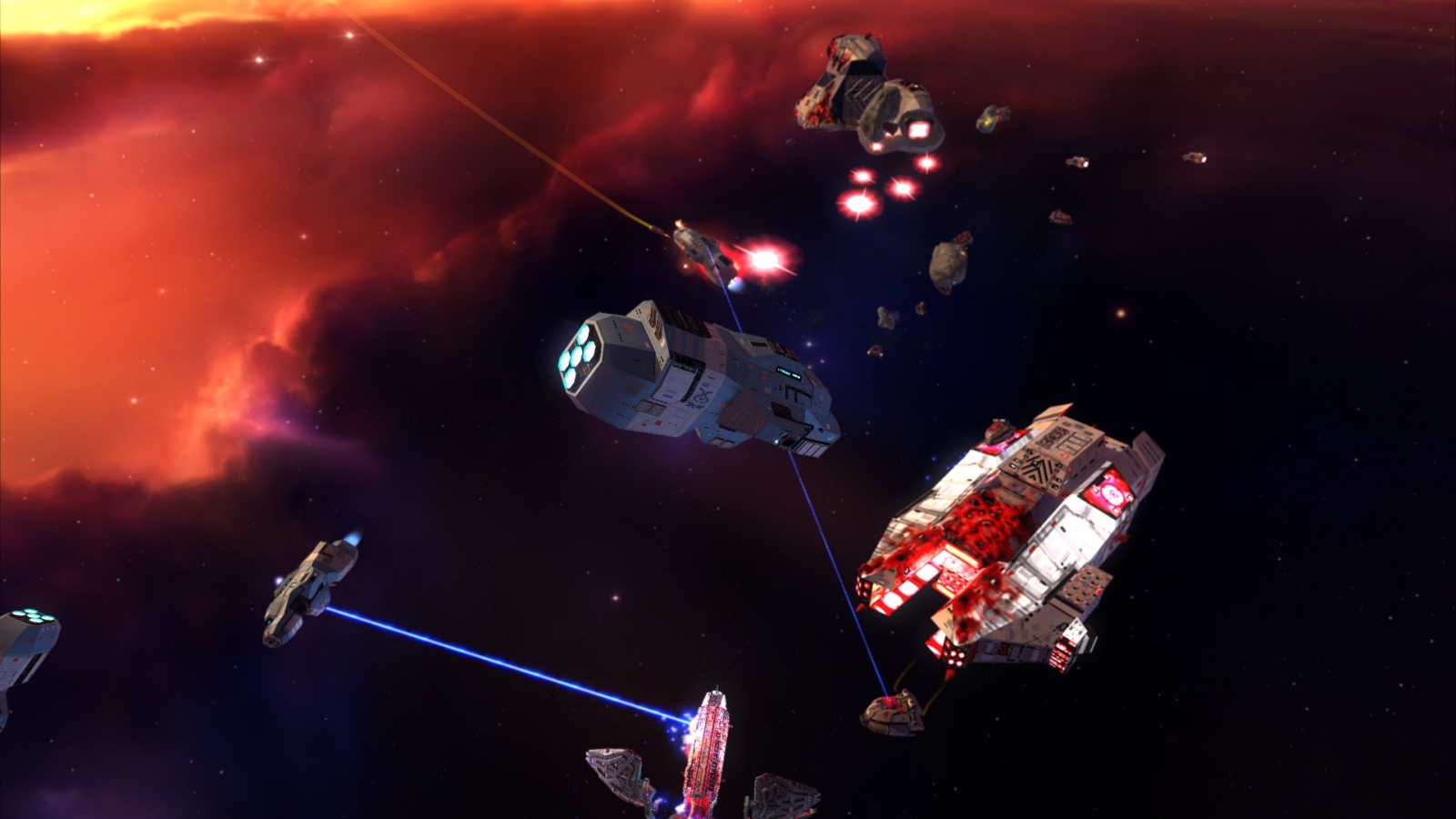 But of all Homeworld mods, the project I'm most excited for is Cataclysm Remastered, currently available in beta. An ambitious project to port over the entirety of Homeworld: Cataclysm (my favourite game in the series) to the Remastered engine. Right now it it's limited just to skirmish and multiplayer, but lets you get your hands on the Kiith Somtaaw and Beast ships that you so dearly missed. If all goes to plan, the full Cataclysm campaign, rich in low-stakes political infighting and apocalyptic space-horror, is the next feature on the cards. Fingers crossed.