If you click on a link and make a purchase we may receive a small commission. Read our editorial policy.
The Wonderful 101: Remastered review
Not one of Platinum's best, but The Wonderful 101 wins you round via its writing, music and sense of joy.

The Wonderful 101 is a breezy, demented action game in which you battle alien invaders as an army of vinyl superheroes who can merge and transform themselves into weapons. Think Pikmin, but Captain Olimar is played by the Green Lantern, and you're tossing around Avengers instead of seedlings. Or to put it more succinctly, a literal “combined arms warfare” game.

The transforming, aka Unite Morphing, ought to be the highlight but is sadly a bit broken. Here's how it all works: during regular play you control a single hero, the centre of a loose-knit comet of costumed vigilantes. Holding right bumper or the alt key freezes time, allowing you to stretch your entourage into a winding conga line with analog stick or mouse.

Each weapon is conjured by forming a shape. Drag that conga line in a circle, for example, and your heroes will clump themselves into a mighty red fist. Except oops, you've accidentally sketched a triangle and turned your team into a hang-glider. You try again and end up with a sloppily woven lasso, resulting in a giant golden hammer. Third time lucky? Nope, that's not even a coherent shape – it's just a crude, spiralling gesture of anger and frustration. I have so far been unable to write actual curse words with the Unite Morph system, but that's not for lack of motivation. 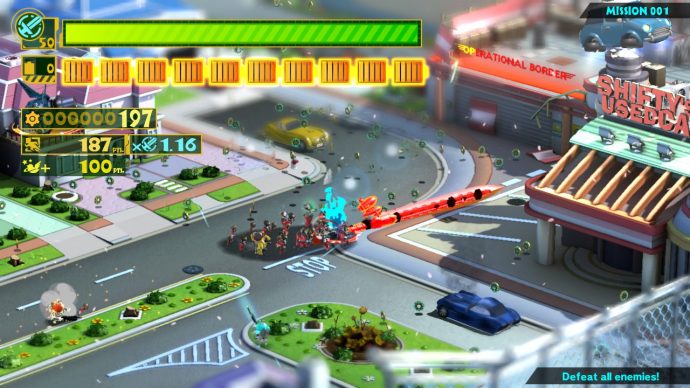 Platinum's action games have always been a white-knuckle balance of elegant and gimmicky, precision and chaos – gif-worthy parry mechanics on the one hand, distractingly vast and ornate encounter design on the other. Many of their games feel like wrestling an octopus, sometimes because you are, in fact, wrestling an octopus while hopping between platforms sprinkled with octopod minions, the camera doing cartwheels as QTEs pop off like paperclips in a microwave.

It makes them joyful but rather maddening, held together as much by a generous allocation of Continues (the price being a significantly lower level score) as their stylish and flexible combat systems. While on the whole a delightful creation, fizzing with '90s anime energy, The Wonderful 101 strains that balance further than any Platinum game before.

Partly that's because it began life as a very unwieldy Wii U title, split awkwardly between buttons and touchscreen. In porting the game to PC and younger consoles, Platinum's designers had the opportunity to sand down the transformation system's rough edges and impose some clarity. For the most part, they haven't. 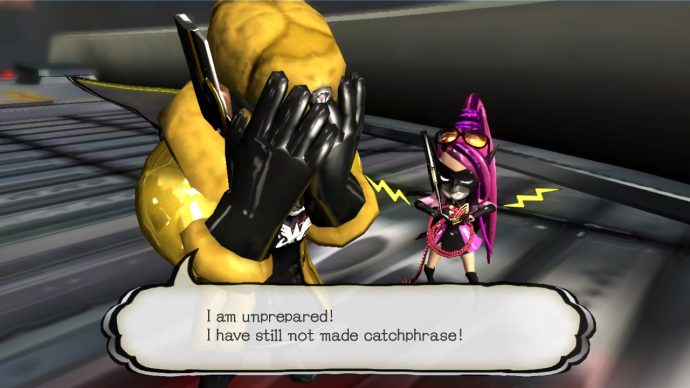 There's no getting away from morphing: the game's arena battles are all about matching the right weapon to the right foe, using a purple whip to rip spiked armour plates from a goliath, or a pistol to shoot down flying saucers. You'll be switching tools and tactics constantly, and it's a blast to experiment as your moveset expands, but the morph system is always happy to trip you up. Defensive abilities are a touch more idiot-proof, mercifully. You can hold a button to congeal your team into a sort of fortified trifle, stunning attackers if you time it right, and there's a no-frills dash and double-jump to fall back on.

You also don't need to worry about shielding everybody. Only the team leader has a health bar: followers are indestructible, though they can be knocked out of formation for a few seconds, depriving you of the bodies you need to assemble the tools of destruction. If time is of the essence you can run over prone sidekicks to hasten their recovery, like Sonic gathering up dropped rings. Outside of battle, you can also recruit bystanders and stranded fellow heroes by drawing a line around them, making it easier to doodle larger shapes and so, fashion more powerful versions of each weapon.

The morphing is least bothersome when using a controller, bizarrely. On paper, mouse control should be the safer approach, but the implementation is so spotty as to make the game unplayable: during one bossfight, I struggled to even draw a straight line. Whether using mouse or controller, the major hindrance is that the game doesn't give you a stable canvas. 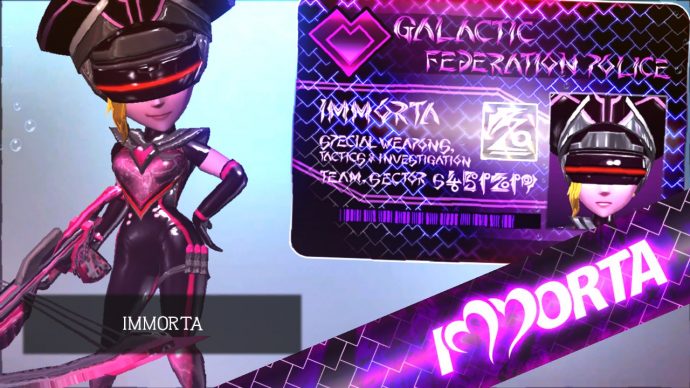 Save for close-up QTE sequences, the odd side-scrolling minigame and some clunky interior forays, the Wonderful 101 uses an isometric-style view. The camera just about keeps everything in frame, though the absence of waypoints makes finding exits a chore, and I often wished I could hover a bit closer to the caped crusaders in my charge. The angled perspective also, in theory, offers up a nice flat surface to scribble on while roaming levels that range from bubbling volcano temples to cubes of shimmering water.

If it's serviceable in a brawl, the perspective makes it hard to gauge depth during the game's platform sequences, many of which are races against the clock. And if the levels are flat to begin with, they seldom stay that way. Buildings topple, floors become walls, the very earth is rent asunder by burrowing robots. Many boss fights take place in the stratosphere - perched on the hull of your mothership, the Virgin Victory, or on the bucking, heaving bodies of bosses themselves. Detritus fills the screen, the camera darts in and out, and spawning those weapons starts to feel like wielding an Etch-a-Sketch in a hurricane. 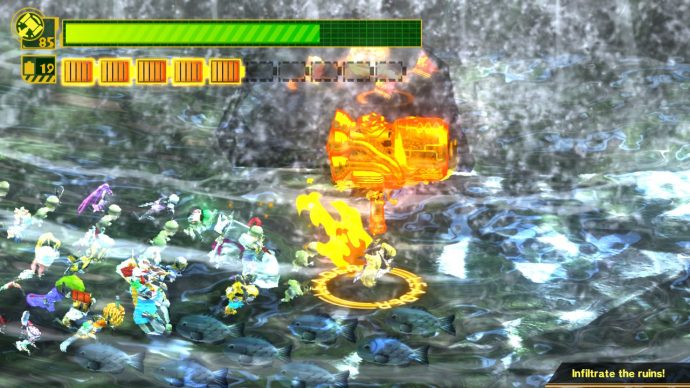 Of course, that very unevenness can be exhilarating. Platinum's games might be bruising labyrinths of spikes and mirrors, but the surprises are usually worth the element of attrition, and so it proves here. Plot contortions aside, the levels are chock full of lovely interactive props like cuttable grass, portaloos that cough up treasure when you stuff heroes into them, and Gacha machines that serve as holding pens for abducted humans. There are some brilliantly farfetched minigame setups, like running over massive buttons to steer a UFO.

Among the juicier discoveries is that The Wonderful 101 has a beefy customisation system, with dozens of unlockable moves and equipment items that, for example, let you cancel damage by jumping, or conjure up two morph weapons at once. It's hardly as deep as Bayonetta, but it's worthy of the comparison. There's a set of multiplayer missions, too, in which up to four colour-coded player armies fend off waves of badniks in areas plucked from the campaign. I wasn't able to find any fellow hero-herders online during the review period, unfortunately, but you can always tackle these missions solo.

The other way The Wonderful 101 wins you round is via its writing, music and voice-acting, which poke fun at the ham-and-cheese tropes of shows like Power Rangers while also being thoroughly in love with them. The team's leader, Wonder Red, is a Clark Kent-esque square who can't address anybody without citing their rank and title. He's joined by surfer swordsman Wonder Blue, who is forever drawling about his Valiantium Blade. The humour extends outwards: pause the game and your tea-sipping CO might tell you off for deserting your post. And then there's the theme song, a powerfully stupid anthem to the wonderfulness of the Wonderful 101, which has me beaming from ear to ear every time I hear it. 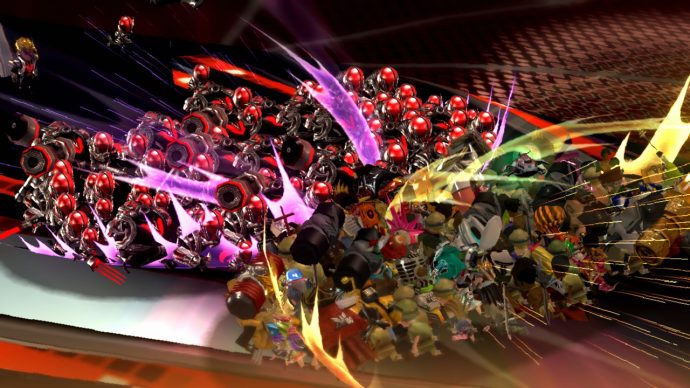 The taste for caricature sometimes feels mean-spirited, admittedly. Take the game's eye-rolling portrayals of women. I don't mind a bit of sauce with my superheroics, but when almost every female character is treated to a lingering ass shot, and defined as either a screeching hussy or a cougar, you want to give the narrative team a clip round the ear.

No superhero story would be complete without a garrulous arch-nemesis, and The Wonderful 101 has a good one in Prince Vorkken, who actually tells you how much time you need to set aside before launching into a monologue. One of Vorkken's taunts is to call Wonder Red “Blunder Red”. It's lame but it sticks in the mind: is The Wonderful 101 more blunder than wonder? 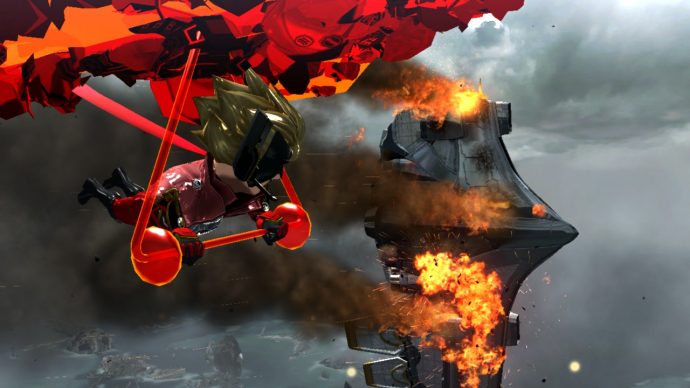 Some of the time, the answer is yes. This is far from the most polished remaster I've played, and the original was a hit-and-miss affair to begin with. Judged in terms of Platinum's own end-of-level trophies, this earns a silver award at best. But then that preposterous theme tune kicks in, sweeping your misgivings away for a precious handful of minutes. When you hear that music, you feel like you can do anything – even draw a circle correctly on your very first try.