I never played Toejam & Earl in 1991. I didn't own a Mega Drive, and my friends with one never had it. And, children, in 1991 we didn’t have a The Internet in our houses back then, not even a bit. So I grew up in a world where it simply didn’t exist. Playing this revival of the series - Toejam & Earl: Back In The Groove - almost incomprehensible in its strangeness, I’m a bit sad that was the case.

There was a 1993 sequel, also on Mega Drive, and then almost a decade later, peculiarly, an Xbox only release in 2002. I didn’t have an Xbox either. It’s been a game of cat and mouse. I didn’t even notice that Sega released both the first two games on Steam in 2012. But now, at last, we are united. Gosh, it’s odd. It’s definitely not very good. 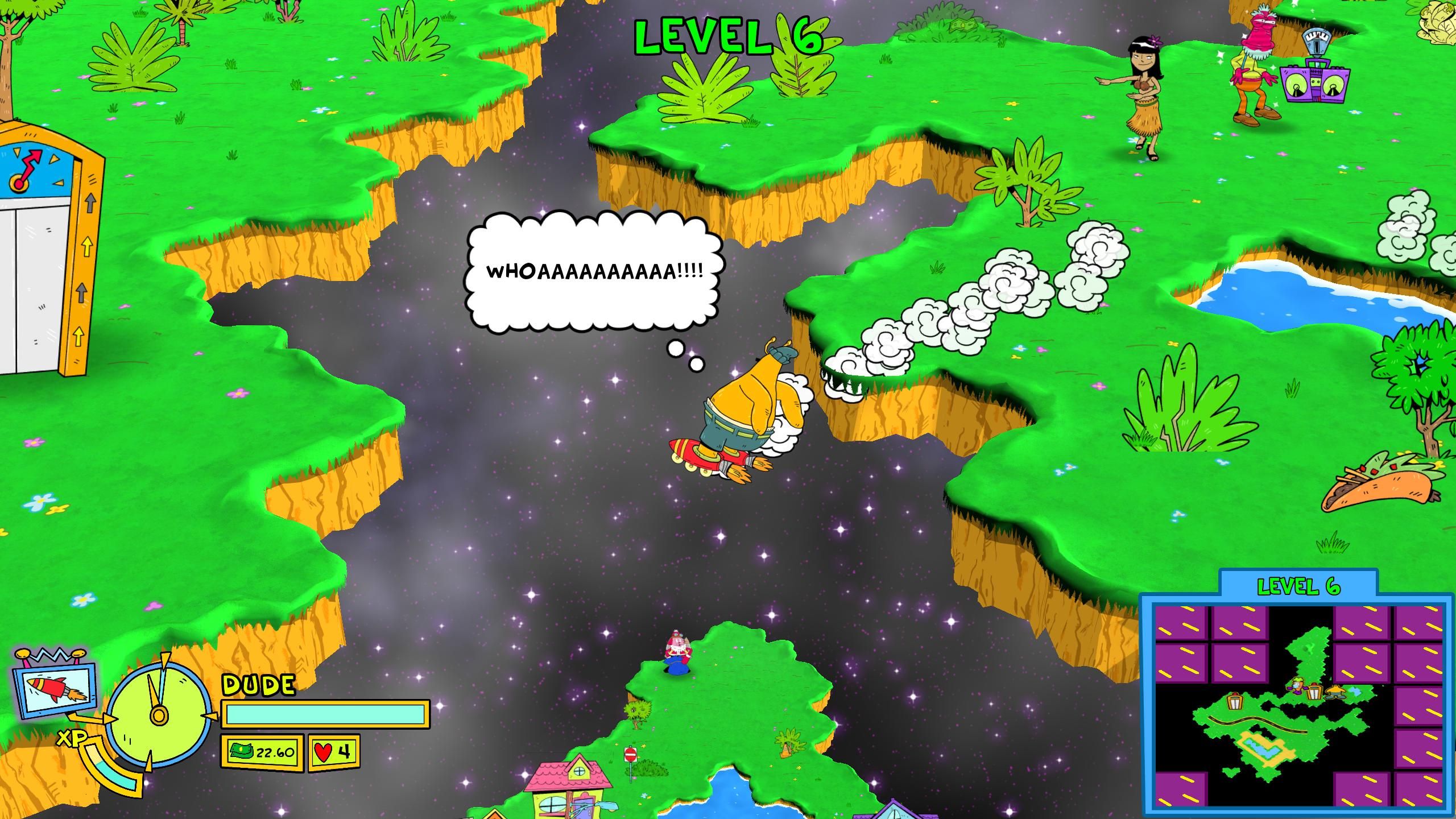 This fourth game, Back In The Groove, returns to the series’ roots, looking and playing far more like the 28-year-old original than either of its diminishing sequels. Which is to say, small green islands, floating one above the other, in which you must wobble about gathering presents, avoiding or hiding from enemies, and, most of all, just being completely bewildered about what the bloody hell is going on.

It’s this last aspect, I should stress, that I liked most about Groove. This is perhaps because I dislike pretty much everything else about how it plays. Gosh, it’s an irritating game that, for a while, managed to distract me from how annoyed I was getting via its infectiously joyful nonsense. For a while.

So while I was being aggravated by the sluggish movement, I was being delighted that there is an elderly man in a carrot costume who can identify the wrapped power-up presents I pick up. When the repetition started getting me down, which was alarmingly early on, I couldn’t help but smile that I could pay a Wagnerian opera singer to scare away all the enemies. And then just when I’m wondering what the point of playing any more might be, I’m side-scrolling through some hellish early '90s colour-scape at ridiculous speed, and at no point whatsoever having any idea why. 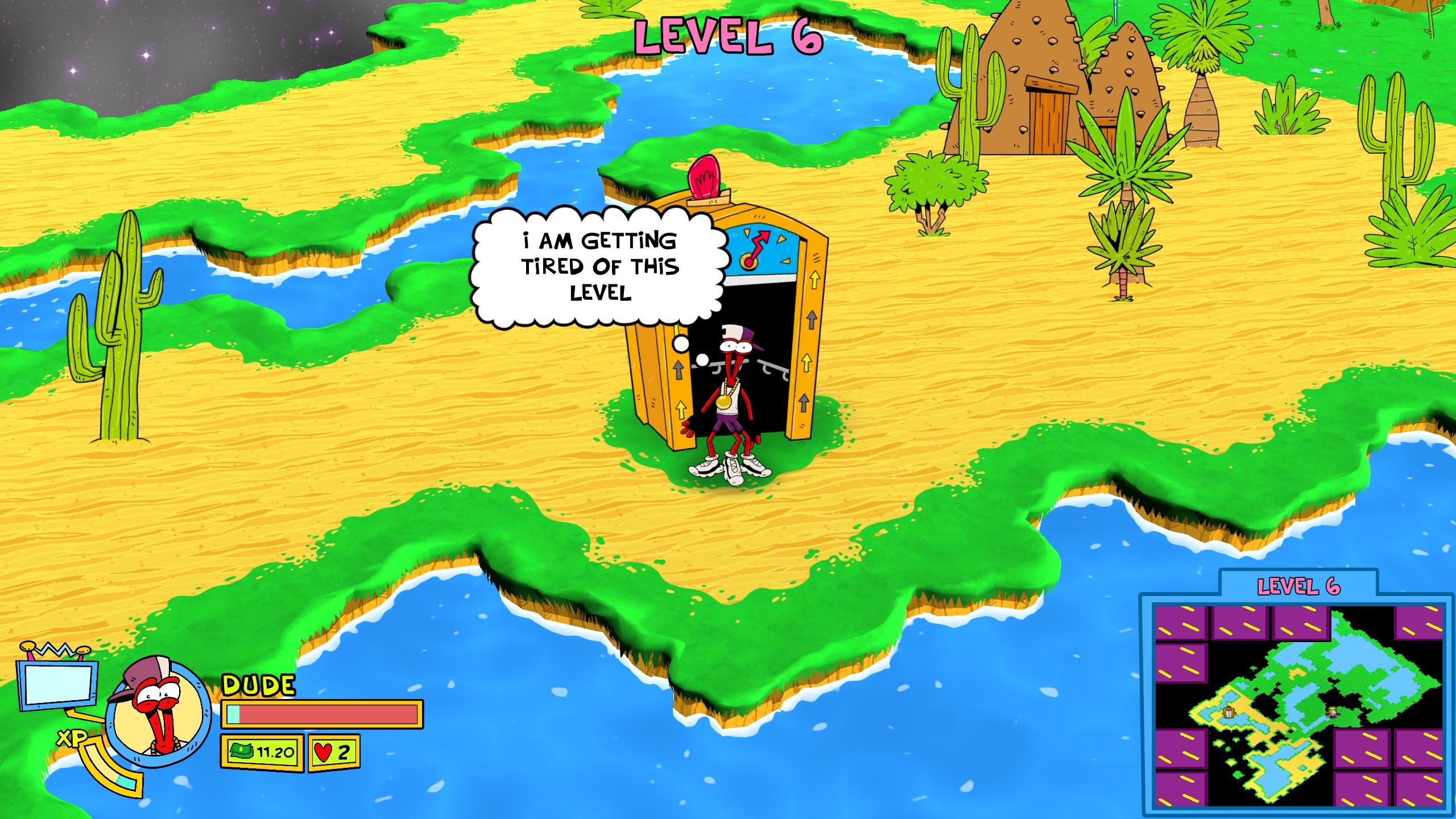 The ostensible goal of the game is the same as that of the original. You play as one of a large gang of aliens, including of course the titular Toejam or Earl, wandering these randomly generated landscapes to try to recover ten missing pieces of your exploded ship. On the way you need to avoid the threatening Earthlings, take advantage of the help of the nicer ones, and pick up all manner of unidentified bonus items in the guise of pressies.

You enter elevators to reach higher islands, and can be pushed edges off to fall to lower ones, and, um, er, yeah. Gosh there’s not much to do.

I can entirely see how this worked as a Mega Drive game. Randomly generated levels, idling away time with silliness and funky tunes and a ridiculous ‘90s aesthetic. A pioneering early rogue-lite, all small enough to not need the save system you wouldn’t have. But I’m really struggling to understand almost exactly the same thing as a modern game three decades later.

Oddly enough, this revival was woefully unambitious from its 2015 Kickstarted inception. I went back to look at the project, which raised an astonishing half a million dollars, expecting to read of all the lofty goals and brilliant new ideas that must have been dropped from the project over the three years of slips and delays and gaining and losing of publishers that followed. But they’re not there! The pitch from original developer Greg Johnson is simply, to paraphrase: 'We’ll make a sequel to the first game with all the same stuff in it, along with some of the things you didn’t hate from the second game.' 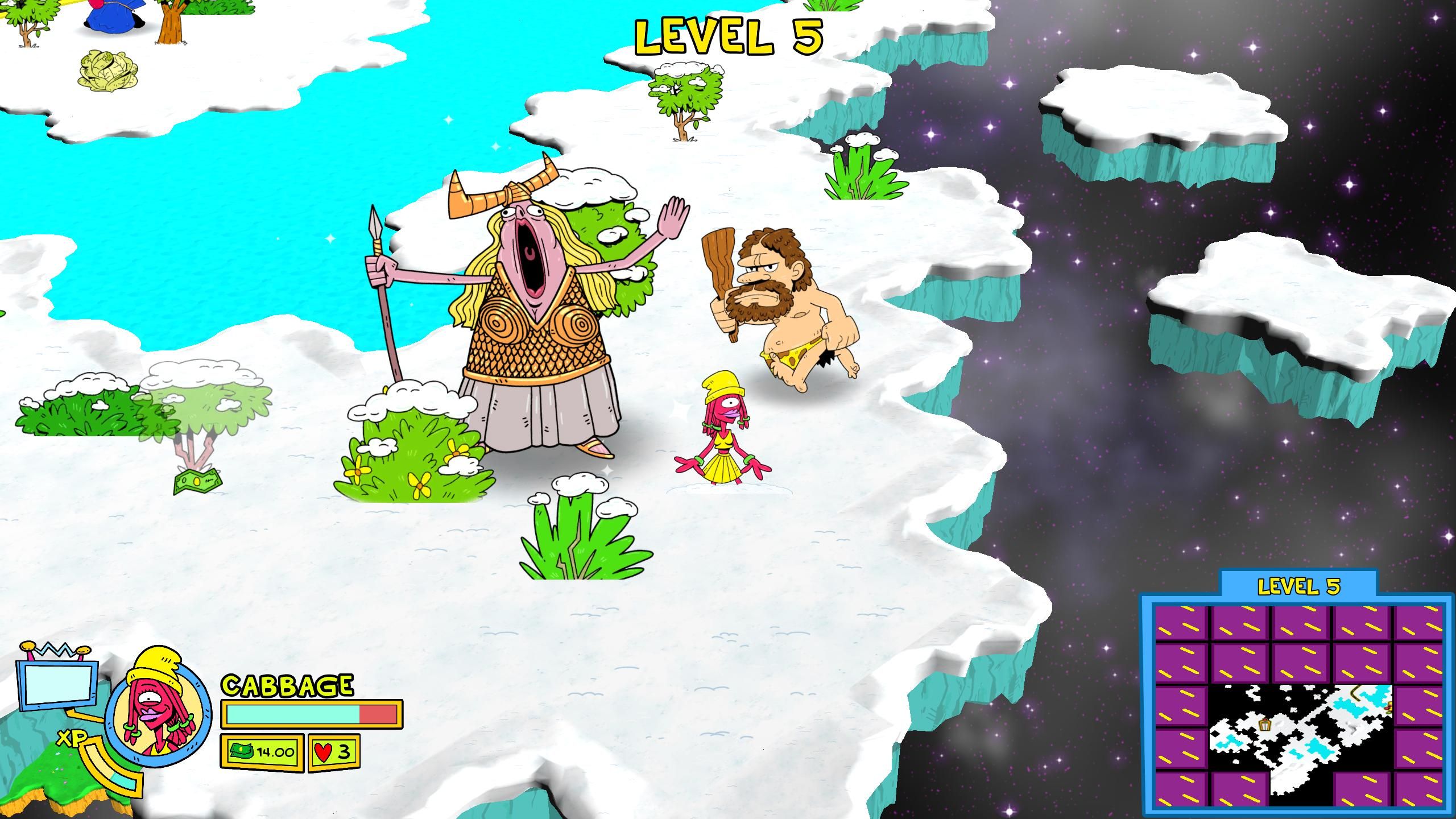 They have! They delivered on their promise. But gosh, what a missed opportunity. At the start they’d pledged to do this on Kickstarter money alone, then later added Adult Swim as a publisher, then later still lost Adult Swim as a publisher, and have at last succeeded in releasing it, three years late, as an independent. It must have been a rocky road, and many don’t ever manage to get out of that hole, so kudos for that.

The issue is, it seems, that the ambitions just weren’t ever there to make something new, to make a Toejam & Earl for the Twenty Teens. Instead it would just rely on nostalgia and funky beats. 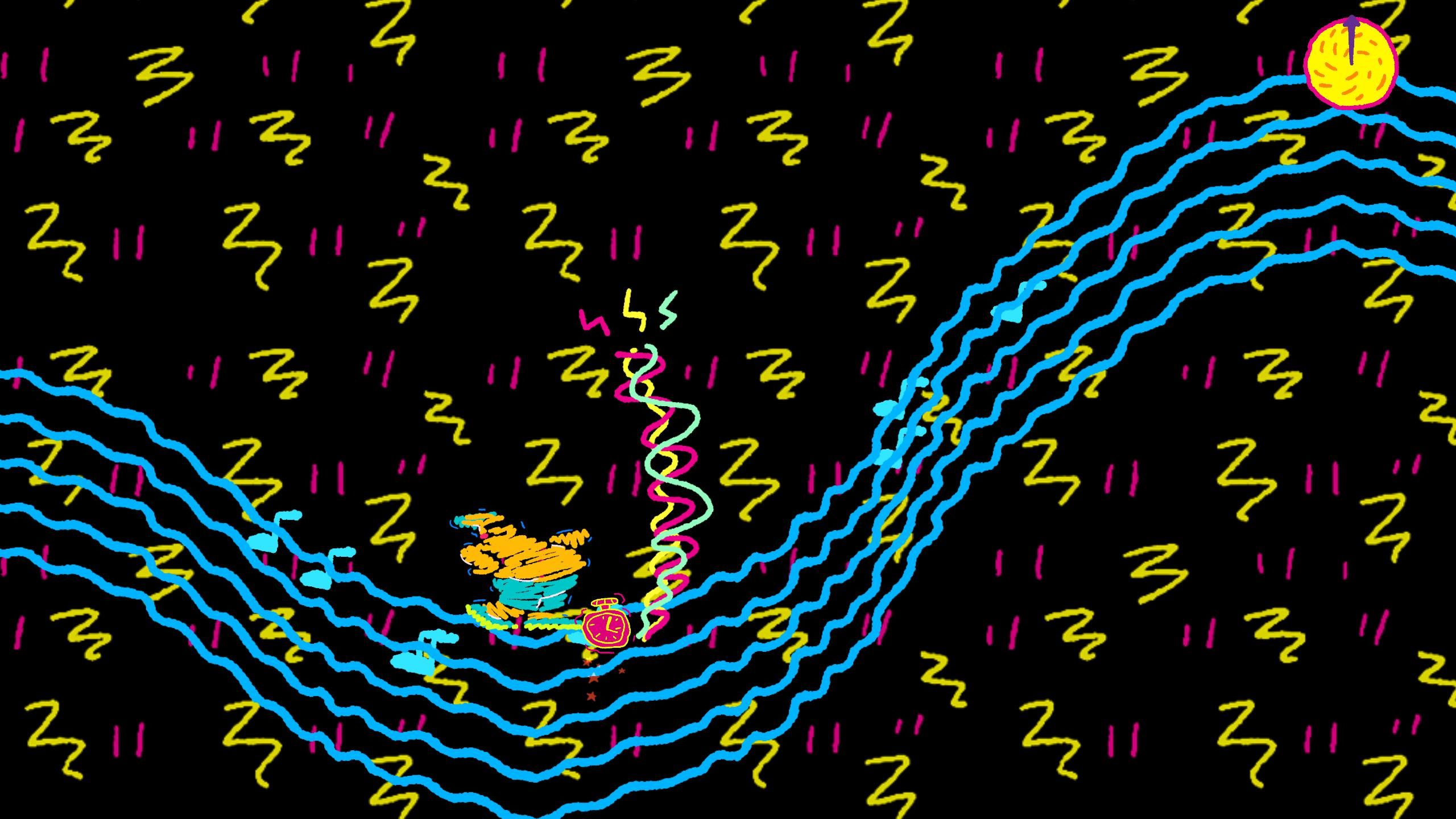 It looks fine. Dated, but fine. Some of that dated is deliberate, that “‘90s underground cartoon” style they were aiming for. Some of it is simply that it’s so flat, monotonously green, and looks like a mobile game from five years ago.

I love the character art, I don’t quite have the energy to care that they’ve just embraced dumbass stereotypes like Viking opera ladies, hula girls and Gandhi-like sages. I love that it’s a game series with black lead characters (albeit actually orange and aliens). I love the animations, I love how the whole game looks like it’s floating over the Saved By The Bell opening titles. But I just don’t love playing it.

It certainly doesn’t help that despite recruiting some of the previous actors from the series, they’ve then had them in the recording studio for perhaps 45 seconds. Despite each player character saying the exact same line in-game, and barely a handful of them, none is voiced. It’s such a gloomily missed opportunity, and serves as a perfect encapsulation of the entire experience. 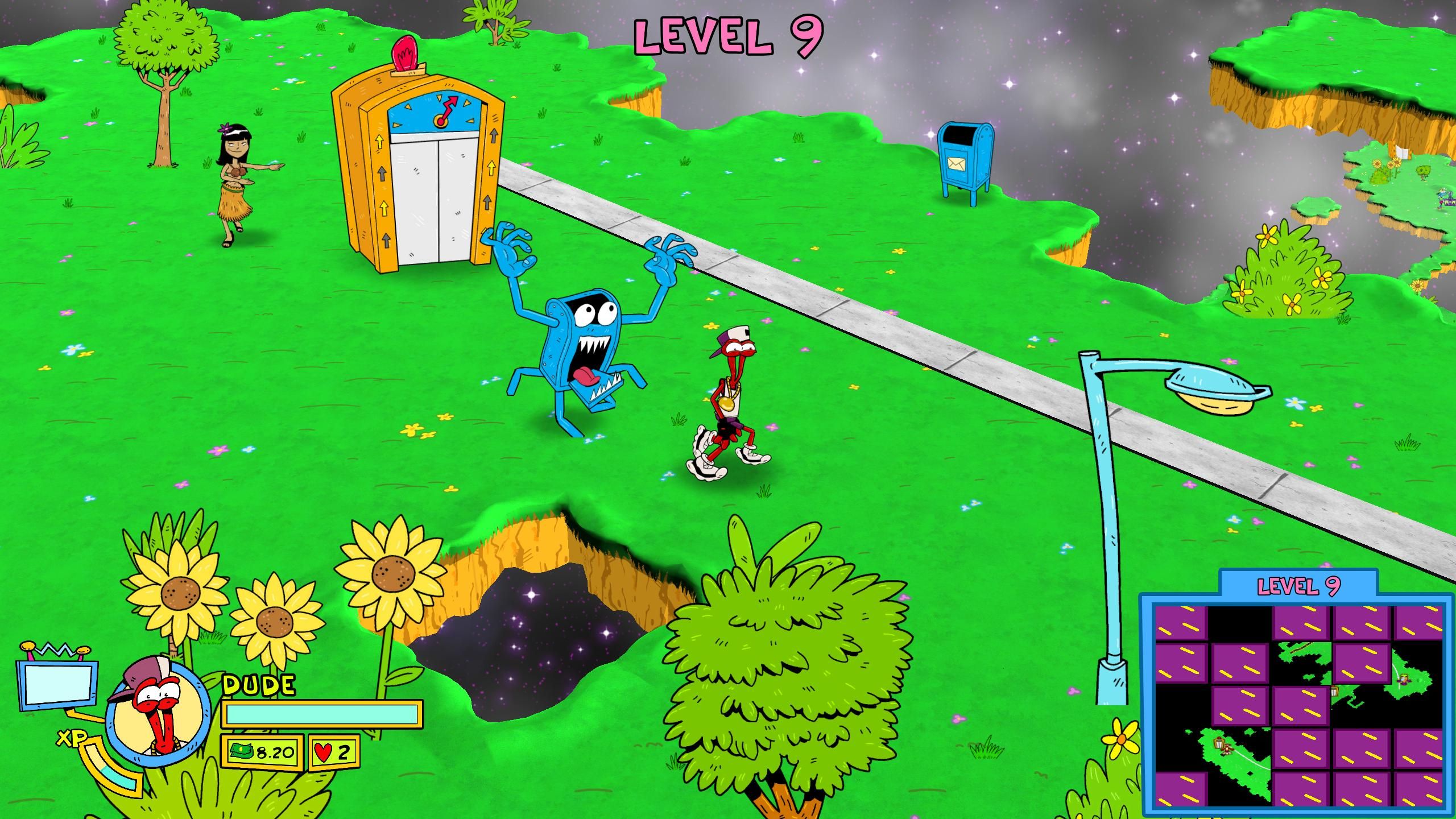 It’s fair to add that a big focus of the game is to play it on co-op, for HILARIOUS hijinks with your friends as you sit through the same tiresome game together and presumably get to make jokes about that? I don’t know. I played it on my own because I don’t think anyone else would have enjoyed this either.

As for all that weirdness that delighted me at the start, I kind of hate it now. And I never hate it more than when I’m knocked off a level’s edge by one of the game’s 782 different ways to knock players off a level’s edge. Because then you have to tediously trudge through an already completed level, avoiding all its increasingly tiresome wackiness, back to its elevator, like a disproportionate punishment from a grandparent who doesn’t really want to have the grandkids staying.

You can only imagine the joy of being pushed off an edge only to land on an island below from which you cannot leave without voluntarily jumping yet another level down. Gah. 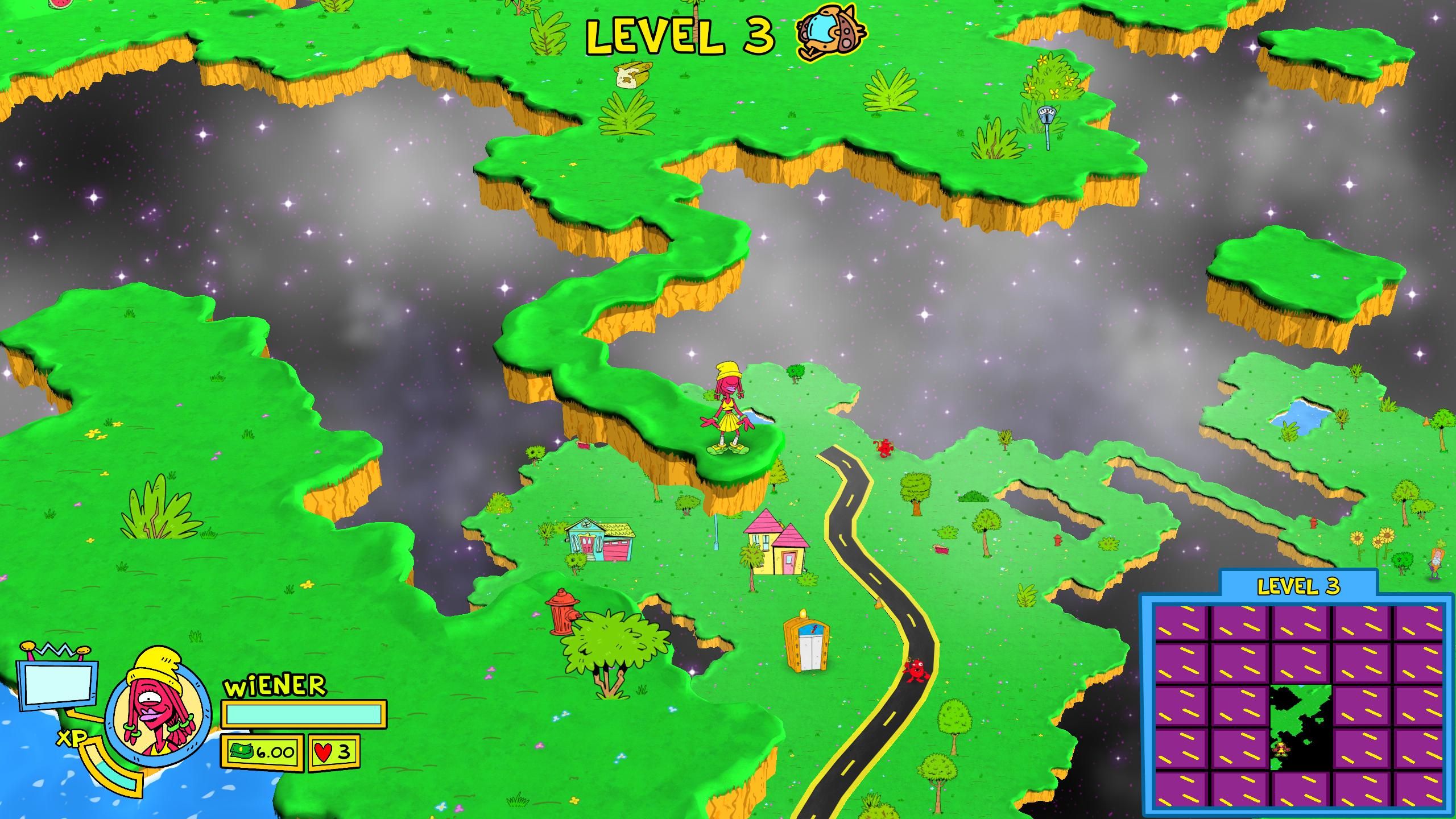 I imagine if you have a deep nostalgic love of Toejam & Earl, perhaps because it was the game you played when you were eight to get over the death of a hamster, then you’ll be just utterly furious with me for besmirching someone spending over half a million dollars of other people’s money to make the same game again. This Is The Game For You. But for anyone who’s curious about the game’s legacy, and wants to experience that infectious funky joy it at first presents, you can pick up the original on Steam for 79p, and then refund it after you’ve finished it.

Otherwise, this is really hard to recommend. The music, which really should have been the focus, is tinny ultra-basic beats, sounding like midi files in their simplicity. There’s no attempt at livening it up with real instruments, and the game’s Guitar Hero-style button-along sequences are insultingly rudimentary. Crikey, I just kept thinking of so many different ways this could have been a much more ambitious take on a cheerful anachronism from an ancient 16-bit era. Sadly, I appear to have been the only one. 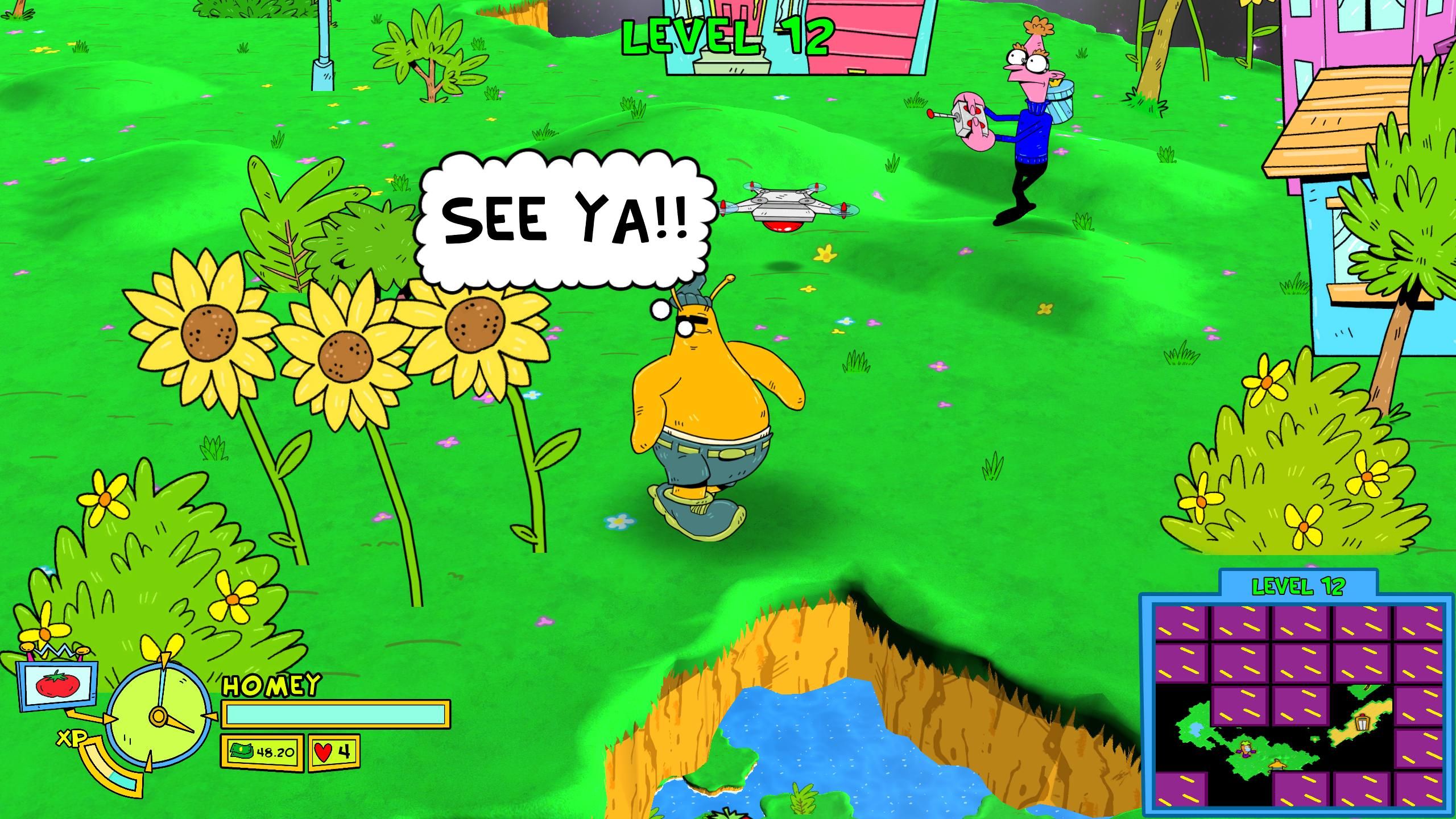