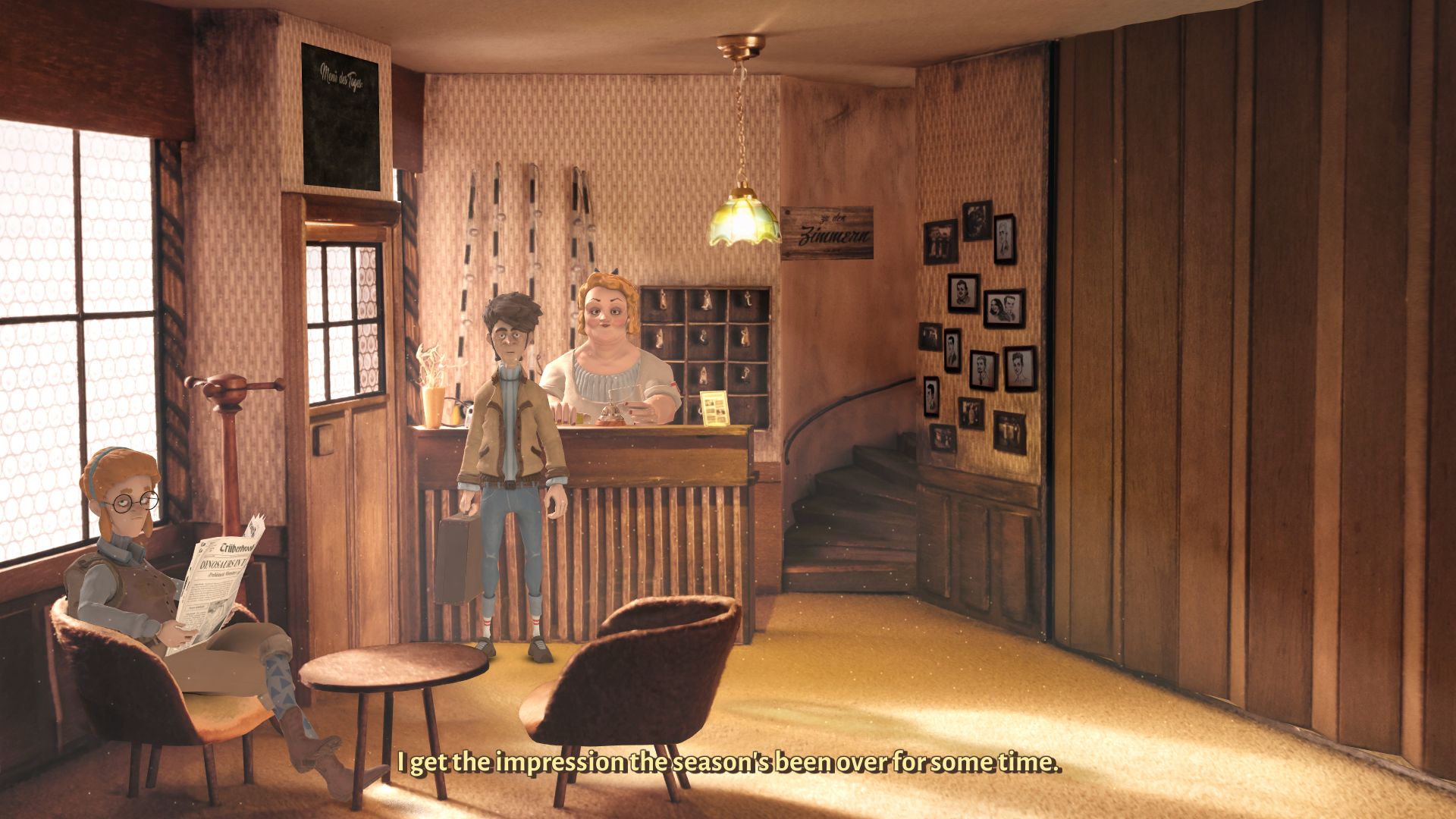 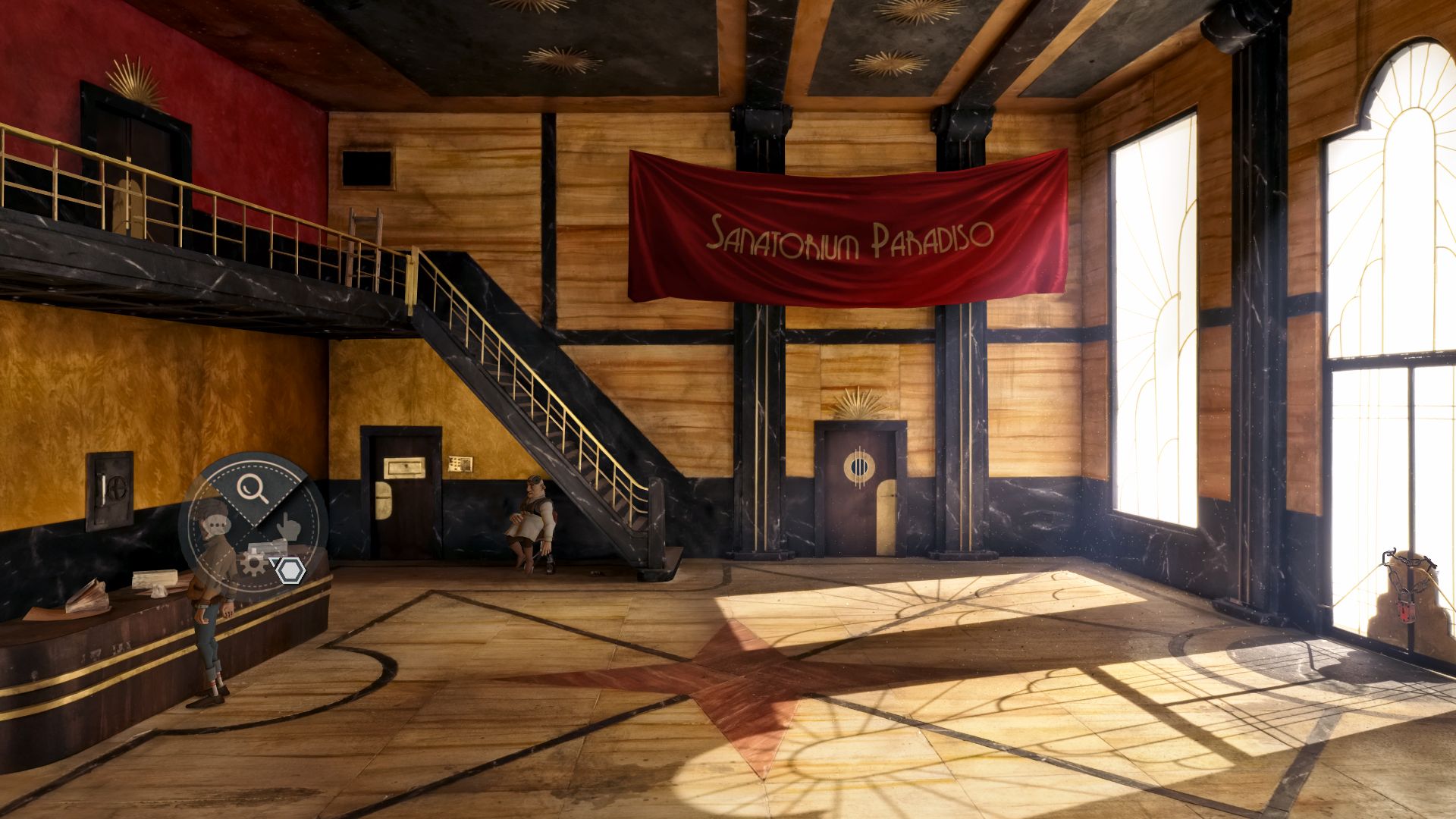 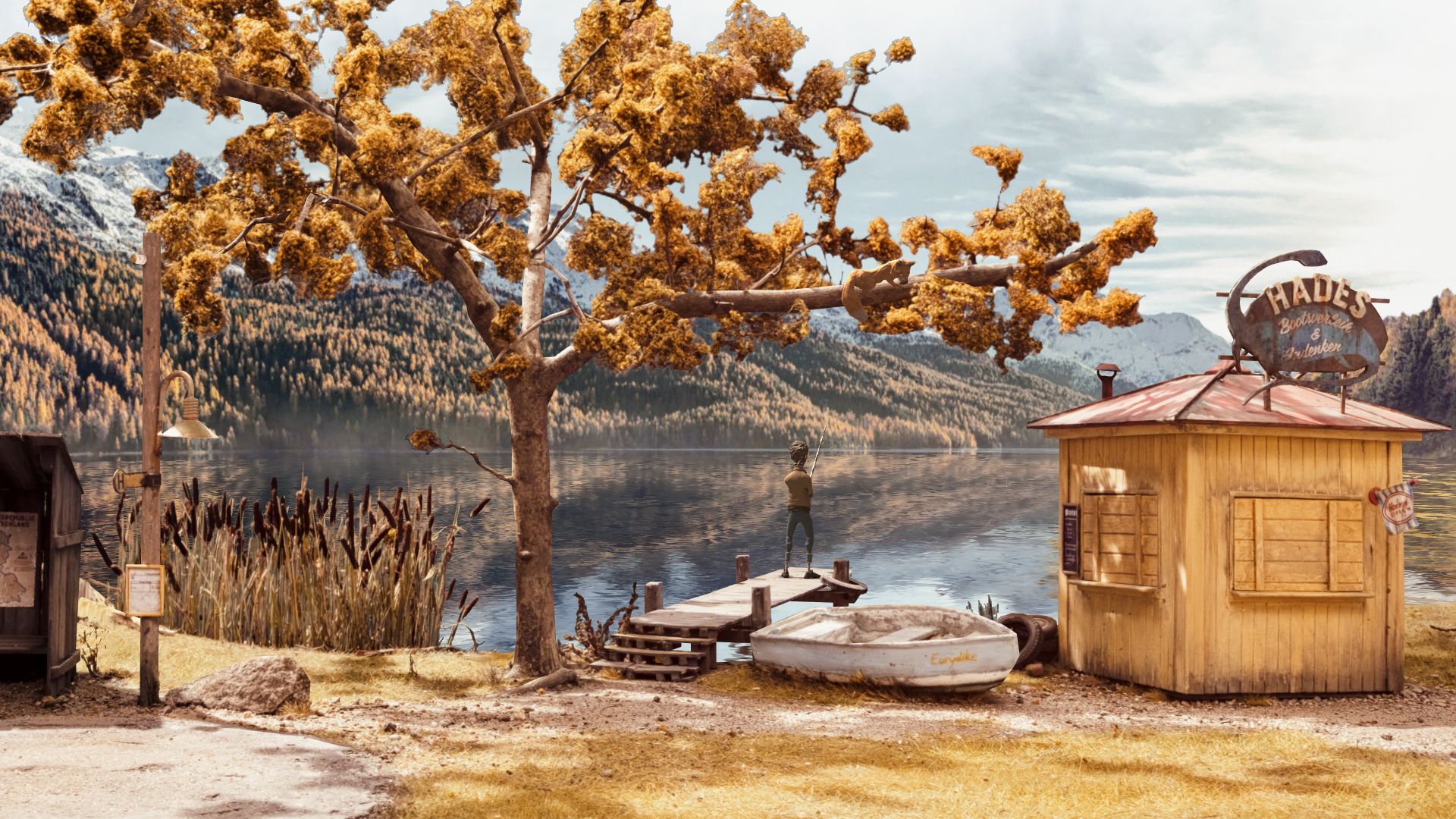 I’ve mentioned before that I love miniatures. The best part of travelling on planes is buying the teeny tiny versions of shampoo bottles that are allowed through security. It’s like my shampoo at home, but smaller! So I was immediately drawn to the idea of ‘handmade’ adventure games like Trüberbrook (or the still to be released Harold Halibut).

You see Trüberbrook, a point ‘n’ click adventure game set in 1960s Germany, uses physical sets, in miniature, which are then magically put in your computer (using photogrammetry, but as we know any sufficiently advanced form of technology is indistinguishable from magic, so: they are magically put in your computer). They’re then populated with digital characters made to look like handmade miniatures, and away you go, solving a weird mystery. 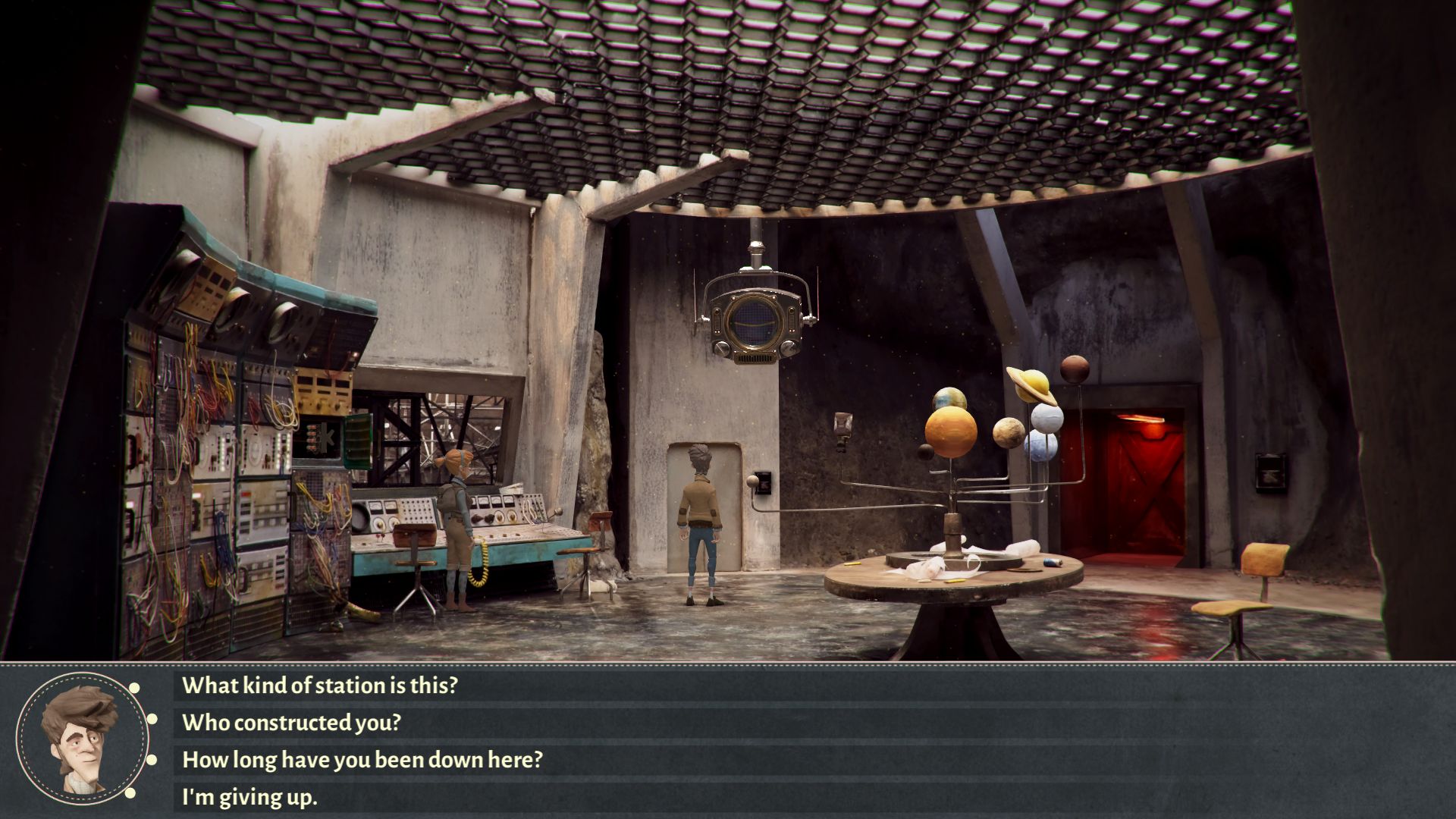 Hans Tannhauser, an American physicist, has won a trip to a remote German village, in a raffle he doesn’t remember entering. Things progress fairly quickly from there, as within about 12 hours he gets involved in a robbery, a sinister hospital, dangerous leftover technology from a giant corporation, and, to be honest, learns a lot about the failing economy of the town.

It’s a lot to be going on with, and perhaps Trüberbrook’s greatest failing is that it doesn’t get around to exploring it all properly. The sanitorium model is beautiful, with shining marble-ish floors and sunlight streaming through the windows, but you spend hardly any time there and never really find out what the deal is; the main antagonist hand waves their motivation away in a line that isn’t really referenced anywhere else; local legends are interesting but turn up as set dressing. It feels like a long round of “Yes, and...!”, without anyone saying “... but, maybe not?” Building Trüberbrook was obviously skilled, labour intensive work, though, and I suppose once you’ve made an intricate physical set, cutting it out would feel like a really sunk cost, even if it becomes a story dead end pretty quickly.

Trüberbrook looks as lovely as it did when I got a hands on last year. I like the floors best. For some reason, that’s where the miniatures look most miniature. The granular look of grass and rocks made me think of Warhammer models. Hans is staying at a B&B, where the faded 60s decor of the houses is oddly comforting, but also explores the town square, some underground caverns, a treehouse, a swamp, and a secret science lab, all at dollhouse scale.

Happily the controls have been overhauled since I first played it. I tested it with a controller, too, and it all works! Rather than your control being weirdly tethered to the man character, you can move your cursor directly onto the thing you want to interact with, and interact. What a revelation! There are a few niggles, mind, like animation bugs or dialogue triggering at the wrong time, but Trüberbrook isn't an annoying game to play. That sounds like damning with faint praise, but a lot of adventure games fail at dodging that particular bullet. Trüberbrook also has additions that smooth out the experience of playing, like moving at double speed, rather than the leisurely adventure game pace. Pressing the spacebar will highlight anything you can interact with, which is non-standard for a game like this, and a nice option if you don’t feel like searching for everything (though I imagine puzzle purists will think that’s cheating).

The puzzles themselves vary wildly in quality, with some making sense and some… less so. But Trüberbrook does have a lot of nice moments where you see an object and realise it’s exactly what you need for a solution somewhere else. It’s especially good when you have to poke around in your environment a bit to find everything, or talk to one of the compellingly odd locals for a clue. 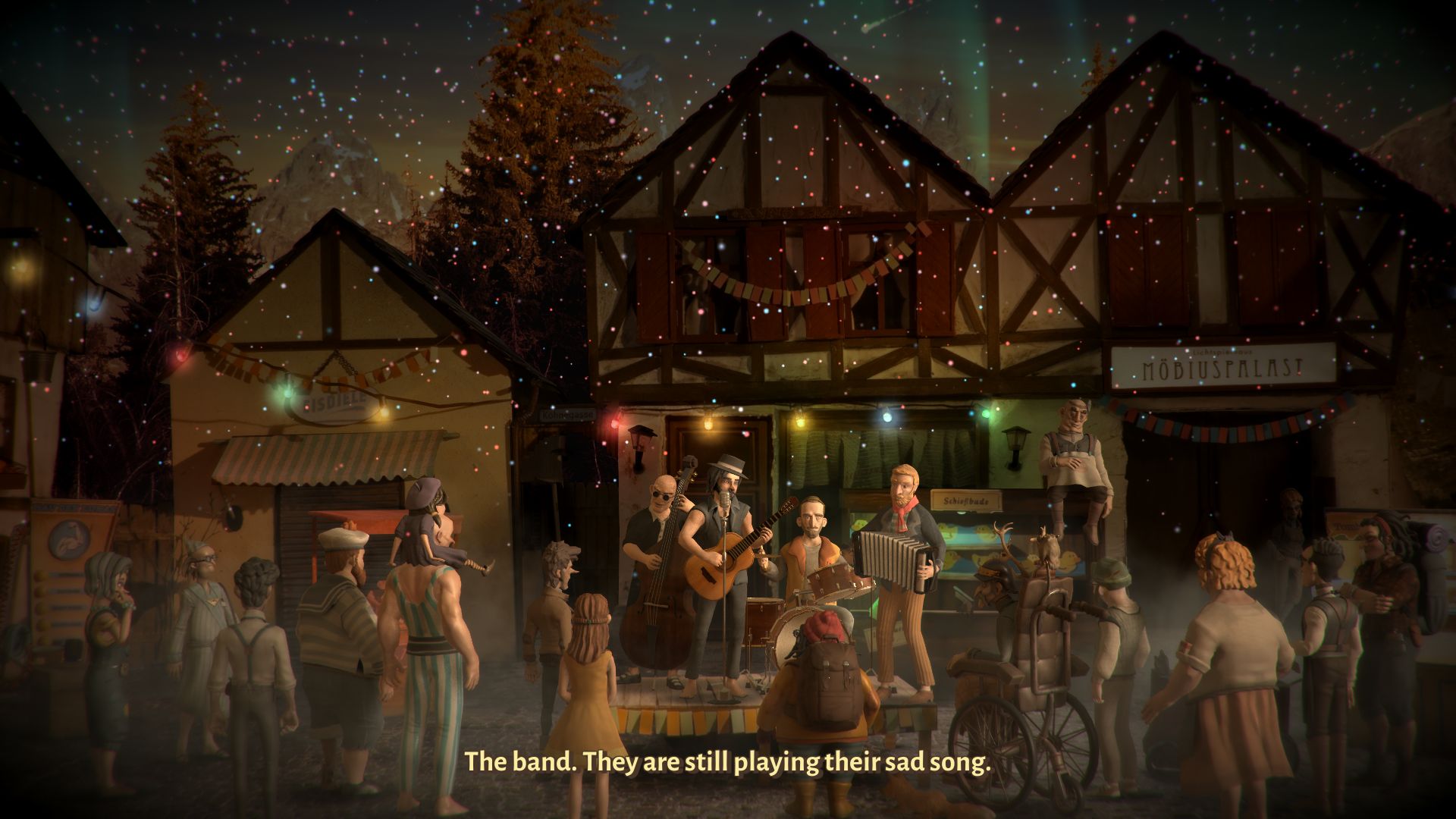 The cast is one of the best parts. Nobody isn’t not weird, and Trüberbrook can be genuinely very funny, like a middle aged landlady not wanting to give back a ‘personal massager’ you found in your room, or an old man who thinks a fox is his cat. But as well as funny, it can be self-indulgent. There are a lot of references to pop culture influences on the game, including an extremely blatant Twin Peaks one in the first five minutes that just didn’t land with me. Hans makes voice memos on a hand held cassette recorder, addressing them to ‘Beverly’ in the same way Agent Cooper made recordings for Diane. There’s also a bit where you just have to watch a band play a song. For ages. The game isn’t even that long

A brisk run at Trüberbrook will take you around five hours or so, but it feels like, if they’d have had their ‘druthers, the team would have made it twice that. Trüberbrook isn’t bad, but it feels like a wedding cake with a couple of tiers missing. Beautiful icing, great craftsmanship on show, but somehow not all there.