To this day, the jaunty static of the opening jingle to Harvest Moon: More Friends of Mineral Town brings me back to a simpler time. Summer evenings spent hunched over my Game Boy SP, a pane of glass between me and nature’s suburban bounty as I tilled my little squares of land, pet my happy little chickens, and bribed a town’s worth of reticent heartthrobs into falling for my little blonde avatar, Pepper, with an onslaught of ores, animal products, and various culinary delights (but never cucumbers, ya’ gummy-mouthed fish-man).

Harvest Moon was about as wholesome as wholesome gets, my first videogame love, but as the days turned to years, we grew apart. Since then, I’ve filled the hole in my heart with the usual suspects, (Stardew Valley, Rune Factory, and so on) until there was only one thing left to do: make my own Harvest Moon. And so began my ongoing personal quest to turn every game I own that is unfortunate enough to not be Harvest Moon into the farming simulation game they were always meant to be. Here, in true naturalist fashion, I present my field notes in the hope that we may go on to tame this new frontier together.

For ease of reading, I’ve rated each game on a scale of 10 ("basically Harvest Moon") to 1 ("probably some other game") based on such factors as neighborliness, color palette, and how cute and ranchable the animals are. 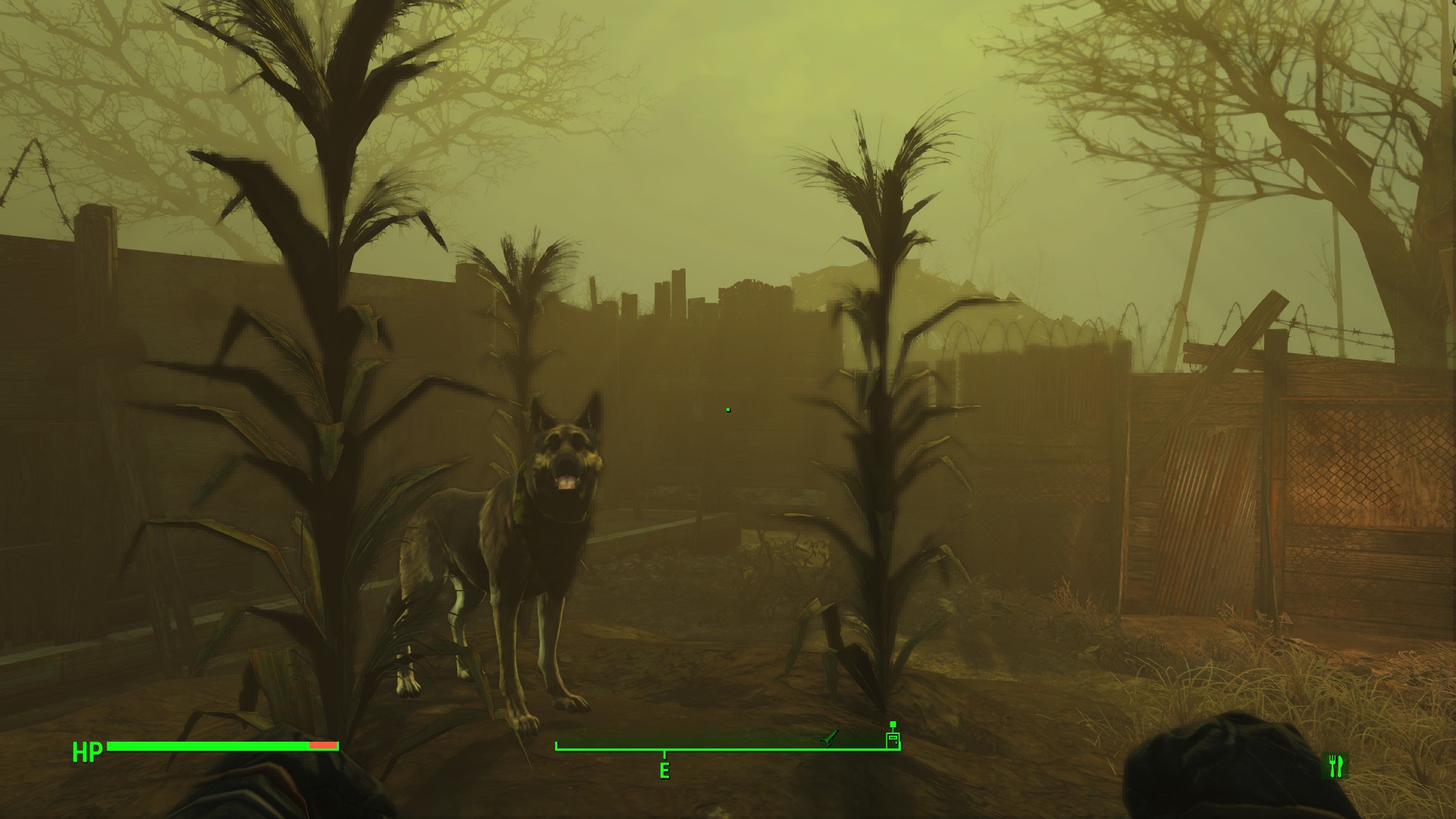 This is probably the first game I took a shot at rehabilitating. On the surface, most Fallout games are a little heavy on the grime and way too light on the pastels for my purposes, yeah, but the settlement building function offers some real potential.

Once we put in the hard work of tilling the land and painstakingly lining up piles of garbage (or “fences” as the wastelanders call them) to keep raiders from marching into our homes willy-nilly, there was plenty of razorgrain and gourds to go around.

The weather is somewhat concerning, but between the general store and my ever-increasing collection of discarded stuffed animals, Sanctuary just feels like home. It would probably feel a little more homey without Marcy and Jun going at each other nonstop, though.

While I can start a farm pretty easily, everyone's in a real mood, my husband's dead, and the only kid I can have is trapped in some kind of android-culty-thing I haven't bothered to investigate yet, so that’s less than ideal. +1 for a good doggo. 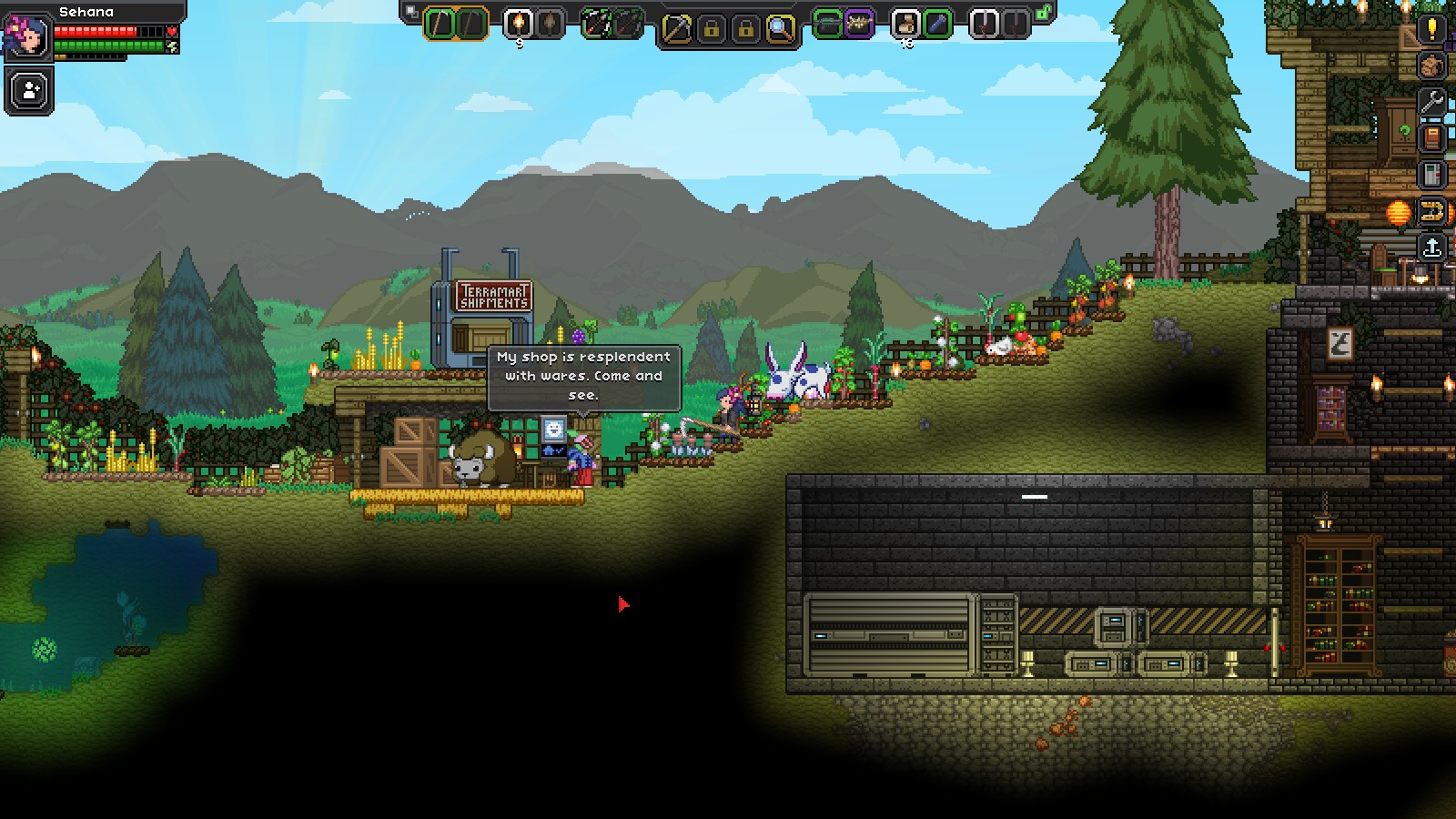 A colorful array of crops? Check. Fuzzy animals, including elven-eared space cows? Double-check. Still, it turns out the universe is a pretty lonely place, and while I may be looking to escape the hustle and bustle of city living, having an entire planet to myself might be a bit much. Fortunately, a friendly pink amphibian named Juro was more than happy to move into my shed. Less fortunately, her “resplendent wares” consist mainly of raw tentacles and novelty bananas, and she refuses to discuss anything else.

That said, cooking is yet another essential part of any Harvest Moon game, and Starbound offers a pleasant array of recipes ranging from Carrot Cake to Bloody Puss smoothies for my interstellar explorer to experiment with, so credit where it’s due.

I have crops, I have animals, and each morning a perfect sunrise marks the coming of a new dawn as I break my fast with a sumptuous meal of my own creation. But with little more than a living pop-up ad to share them with, what’s the point? 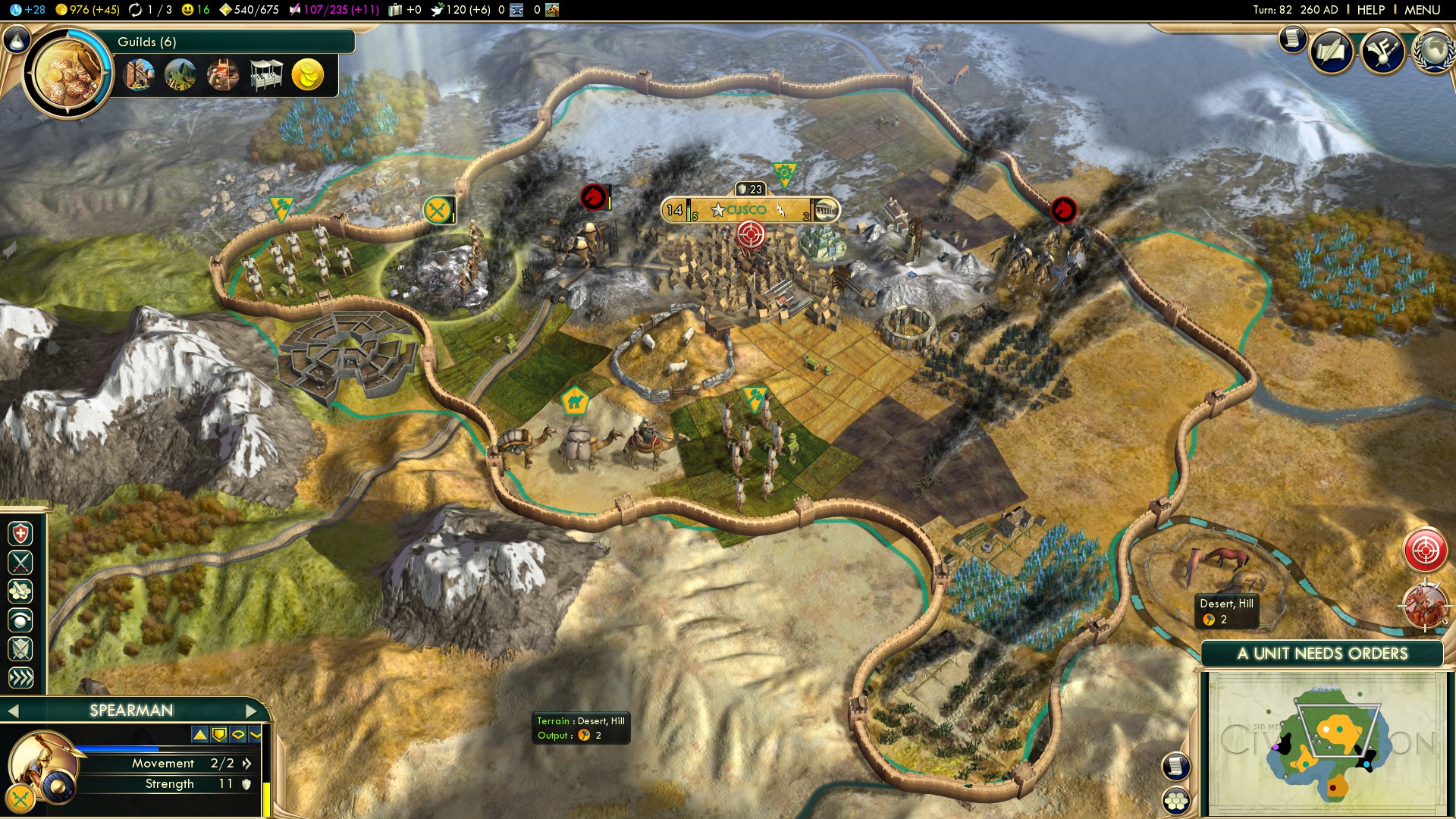 A nontraditional choice, perhaps, but the fact remains that Civilizations V has farms, and I’d say that more than qualifies it for a shot at Harvest Moonhood. As it turns out, idyllic garden nations full of nothing but granaries and sheep are a pretty soft target for barbarians, but Cusco’s one unit militia kept us going for longer than anyone could have expected.

Yeah, technically we probably shouldn’t have had any army at all, but if you think the people of Mineral Town wouldn’t take up a pitchfork to defend what’s theirs, then you don’t understand country folk.

We also managed to get in some fishing and mining before we were overtaken by hordes of wildlings on horseback, features some would-be Harvest Moon games seem to overlook.

Farming is definitely possible, and there’s livestock aplenty, but the local economy could be more supportive of our agricultural endeavors. Might make for a better Rune Factory. 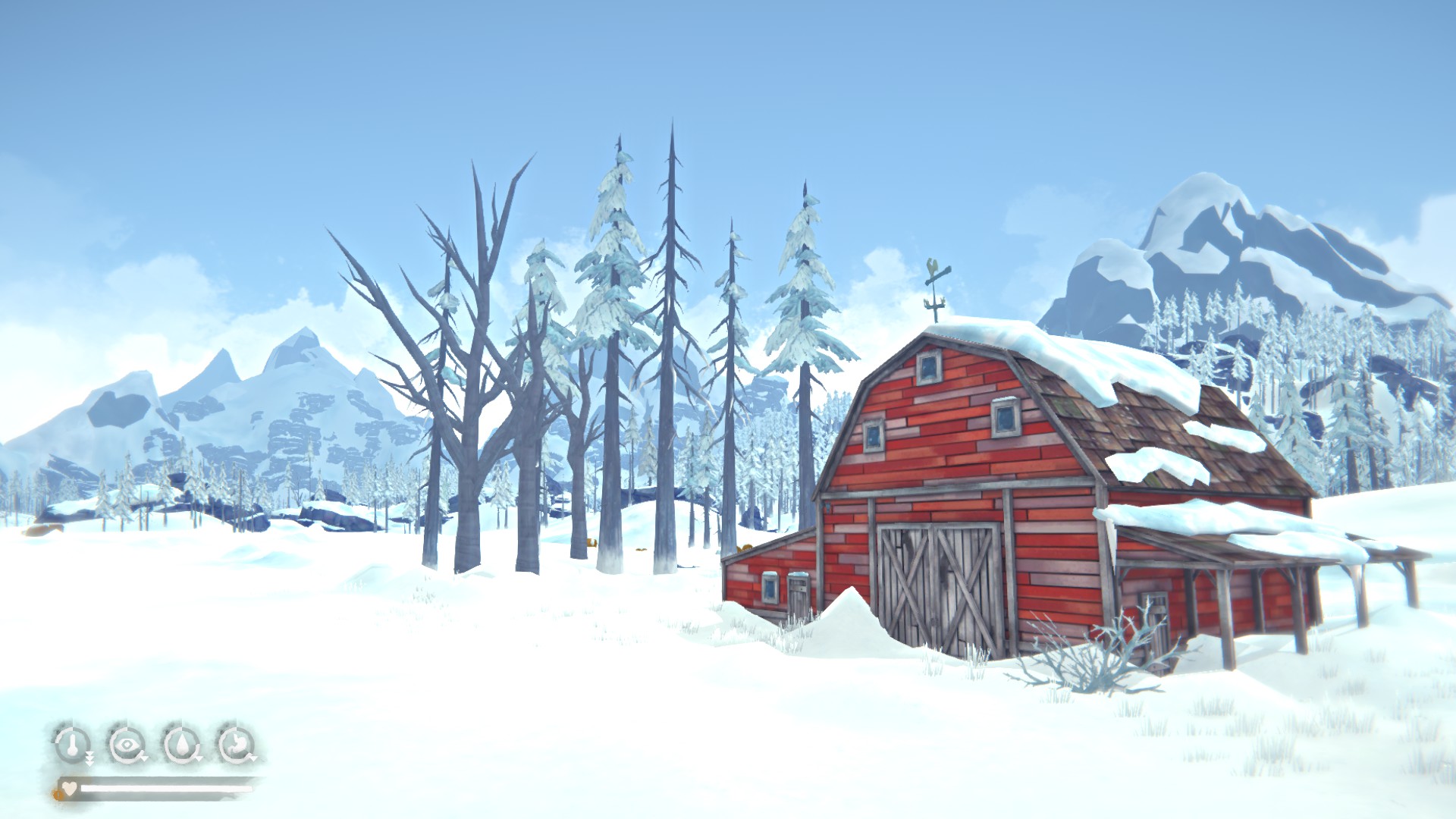 Sure, the Canadian wilds are little chilly for turnips and sweet corn, but Harvest Moon has winter too. Spring, summer, and autumn might have been the money-makers, but it was winter, when the fields and forests alike were quieted by snow, that my farmer really got the chance to explore Mineral Town. The windswept journey past Goddess Spring to the summit of Mother’s Hill never failed to impress upon me the breathless beauty of the season, and The Long Dark has that in spades.

What it doesn’t have is… well, much of anything else. I set up in Pleasant Valley of course, and while the game definitely gets points for the prerequisite red barn, all my neighbors were sprawled face down in the snow, and the only way I could interact with any of them was by picking their pockets.

Not very neighborly on my part.

This game knocks winter out of the park, but considering the developers forgot to include the other three seasons, I don’t see how I could rate it any higher than that. 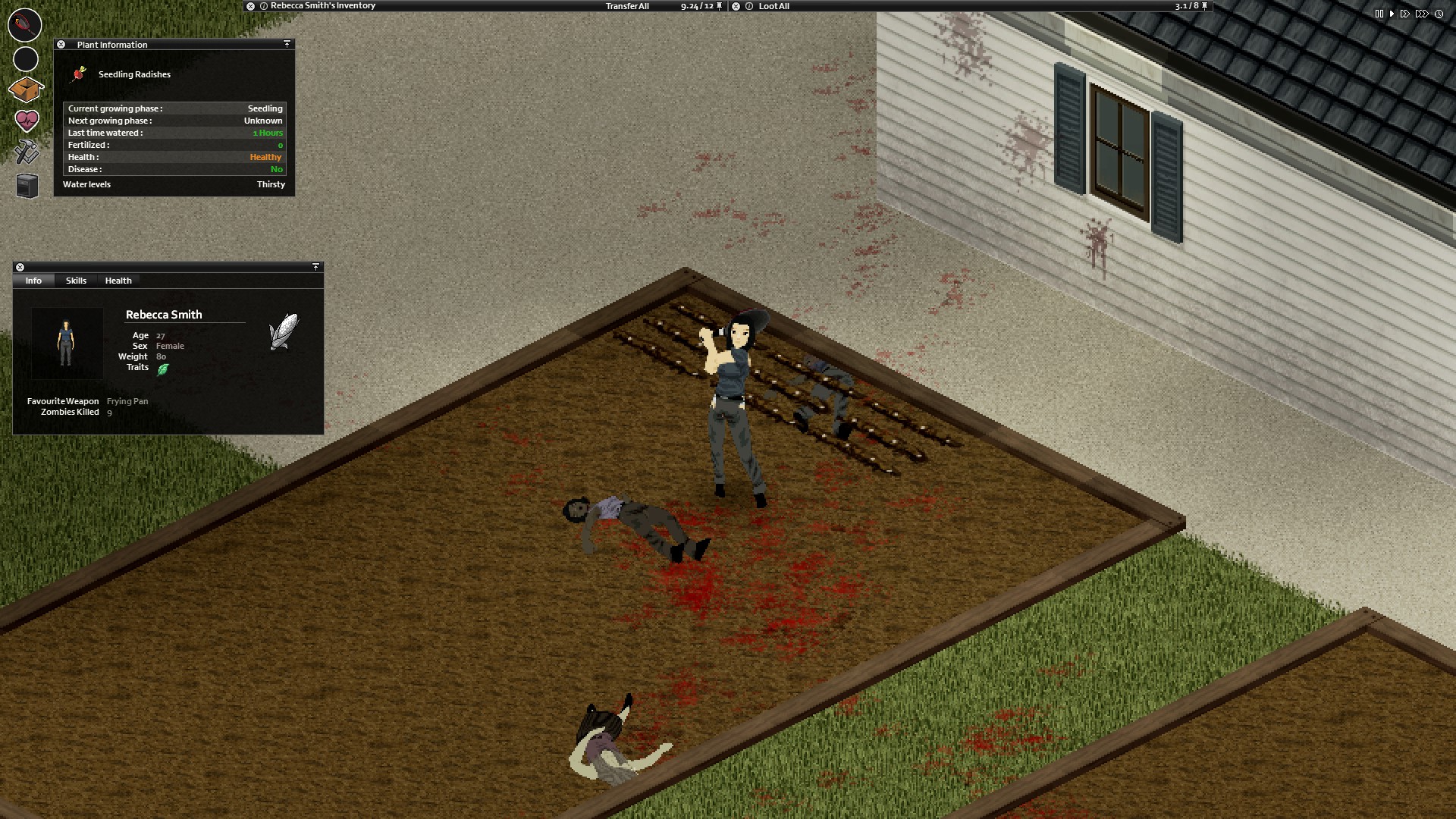 To start, this game let me eat a worm I dug up in my garden, so I’d say it really gets my “back to nature” ethos. Maybe too much.

In most Harvest Moon games, watering your crops is a one-and-done deal. Project Zomboid had me running back and forth with not one, but six pots of water to coax three measly radish seedlings into discovering the will to live. That’s not a leisurely stroll through a pastoral paradise - that’s work!

The zombie corpses offer a promising source of fertilizer, though, and they really went out of their way to welcome me into the community.

The locals were friendlier than those in some of our previous entries, in that they existed, but subsistence farming felt like the chore it really is. No bueno. 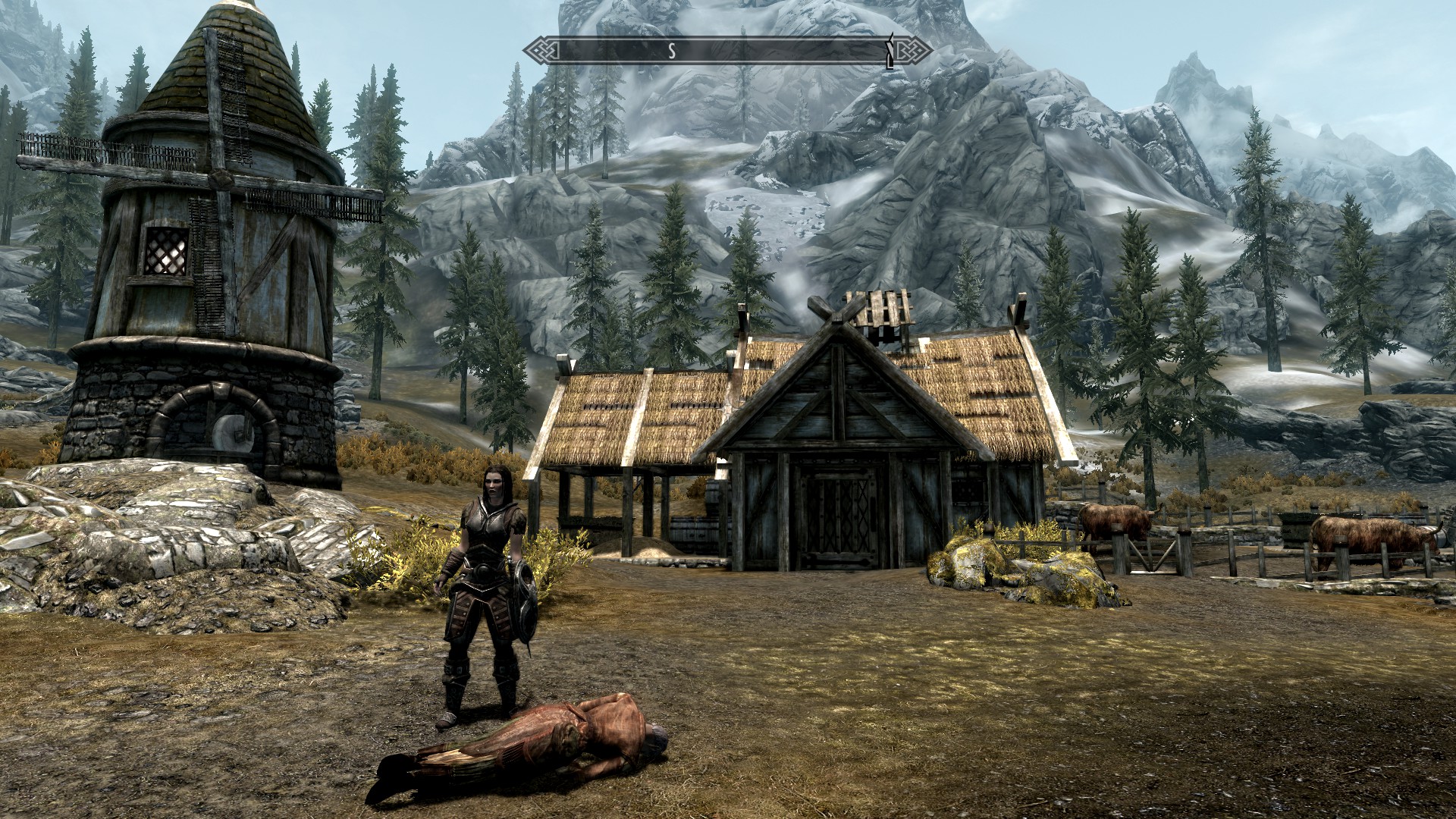 I’ve heard tell that Skyrim’s Hearthfire DLC lets you set up a homestead, raise a family and all that, but I don’t feel like giving Bethesda any more money at the moment, so we’re going to make do with what we’ve got.

Originally, my plan was to head over to Pelagia Farm by Whiterun and strongly suggest the inhabitants clear out, but lady luck was on my side, and by the time I got over there, something or someone had already killed them for me. My suspicion is that they were crushed under the matted mass of random encounter mods I’d installed over the years, but only the gods can say.

With little time to waste on formalities such as funerals and property deeds, Lydia and I settled down into our damp, but not altogether unbearable new life as medieval peasants. Severio’s cottage is beyond cozy, and while the oxen appear largely indifferent to my existence, our fields are overflowing with more local produce than we could ever dream of - so long as we only dream of leeks, cabbage, and potatoes.

Skyrim captures the bleak reality of life as some random serf in a frigid, dragon-infested land plagued by civil war, which is not very Harvest Moon. The color palette is also severely lacking in pink and mint green. 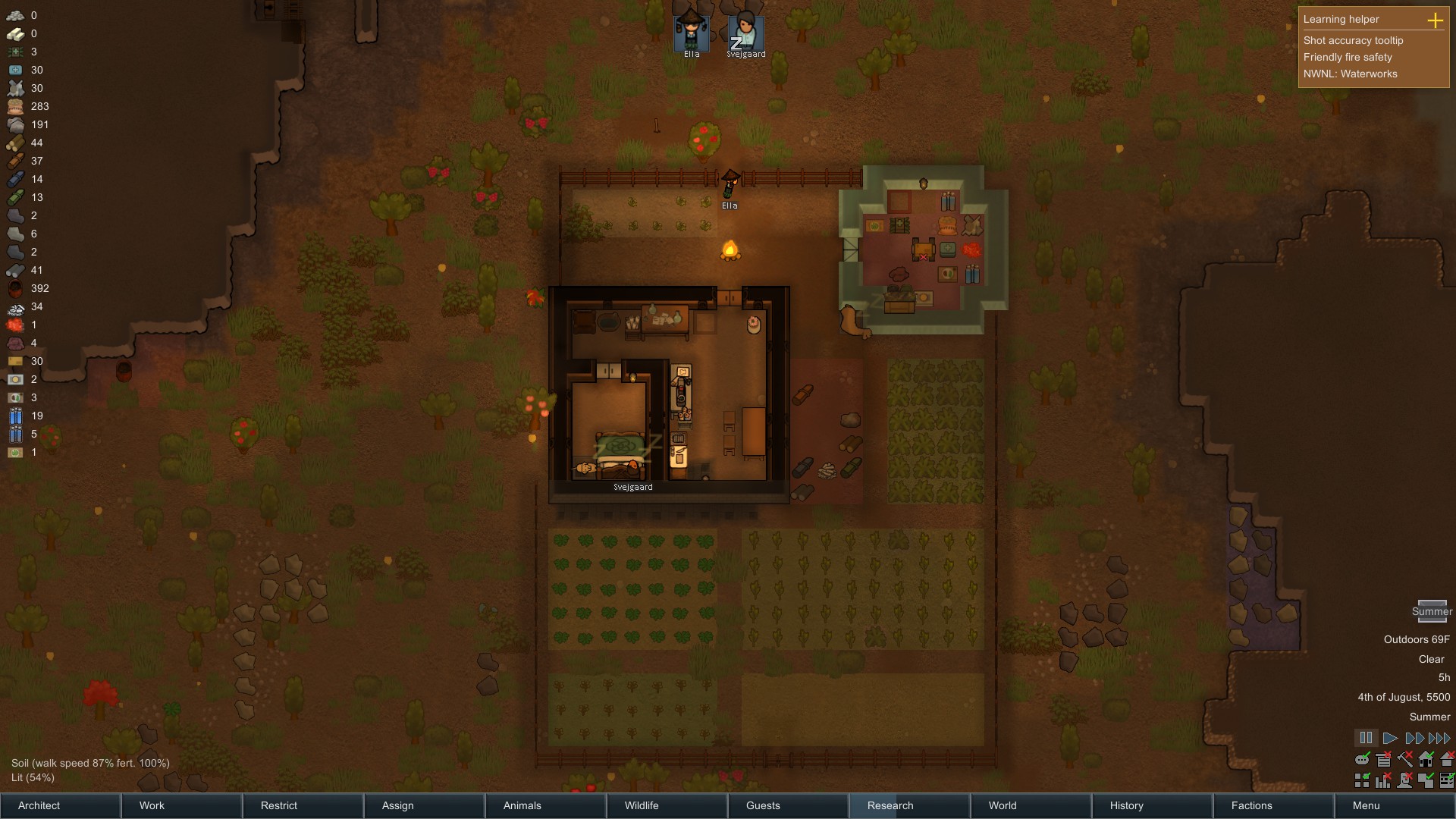 What you’re gonna want to do is turn that baby alllllll the way down to "peaceful", download that mod that lets your pawns have kids, and it’s all Little House on the Prairie from there, friend!

My farmerfolk, Ella and Svejgaard, escaped from a smog smothered factory planet to start a new life on the plains of an untouched world with their dog, Ferdinand, and their new llama friend, Llama 1. This place has everything - foraging, mining, seasons, weather, and there’s even a fishing mod out there for you completionists.

Now we just need a few neighbors to fall from the sky, and we’ll have a real community on our hands!

With a few (dozen) mods, this game has pretty much everything I could want, and if things break bad in the cold months, I can always go full Donner Party, so that’s cool. It still loses a point, though, because, as much as I would love to say otherwise, Rimworld is not, in fact, Harvest Moon.