How humiliating. U-96, a WW2 Unterseeboot on the cusp of greatness, has just been sent to the bottom of the Celtic Sea by a Royal Navy ship named after a hardy perennial. Should I have taken her deeper after disembowelling that freighter with a couple of T2s? Should I have zigzagged more energetically when the boom-barrel deluge began? Perhaps my mistake was not diving the instant the broad-beamed British bedding plant turned in my direction? Attempting to torpedo alerted escort vessels is seldom sensible - you'd think an old Silent Hunter would have remembered that. 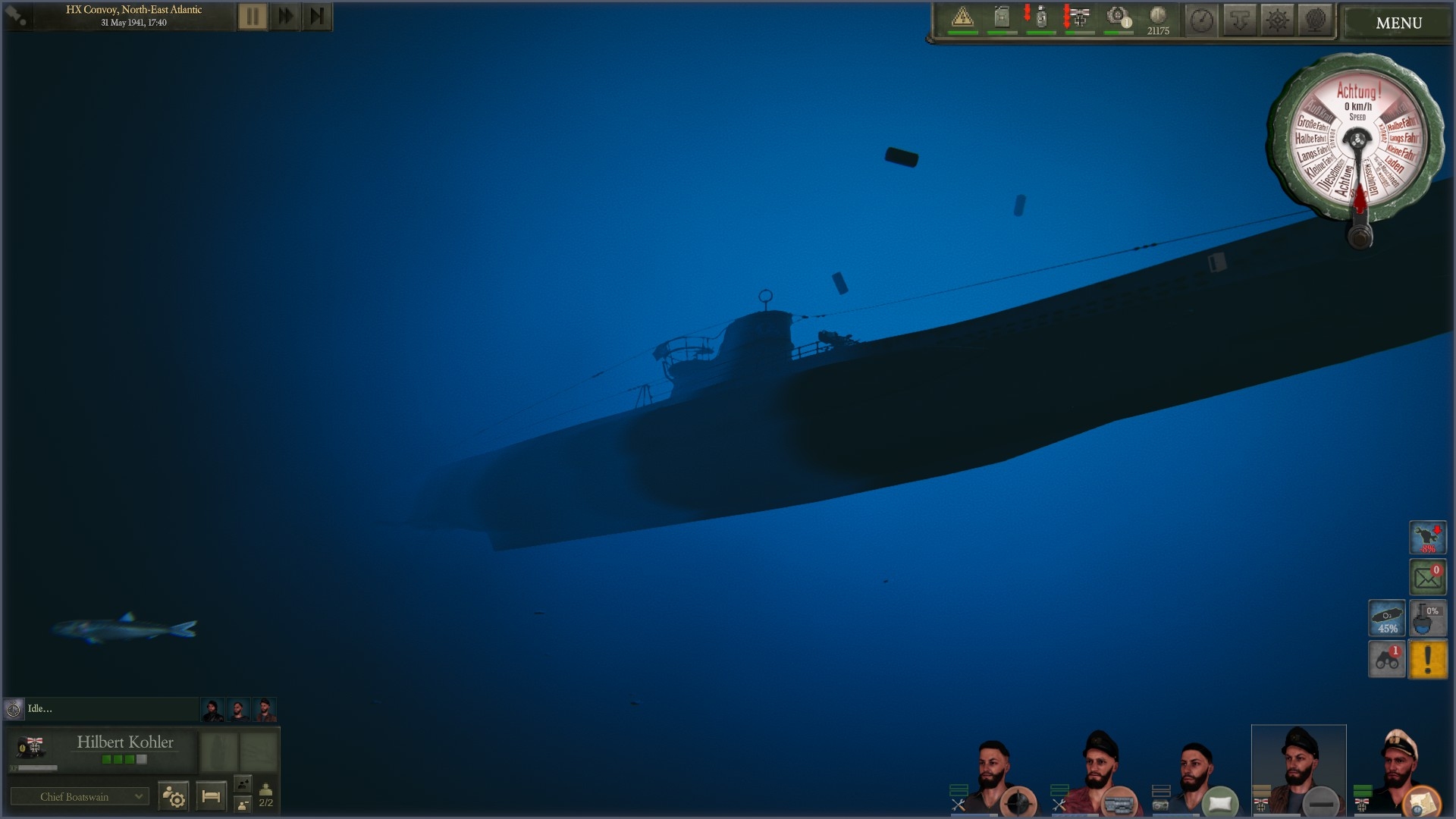 Judging by the preview code that's been absorbing me adroitly this past couple of days, Deep Water Studio's imminent beard-heavy sub sim will prove one of 2019's most memorable and entertaining war games. 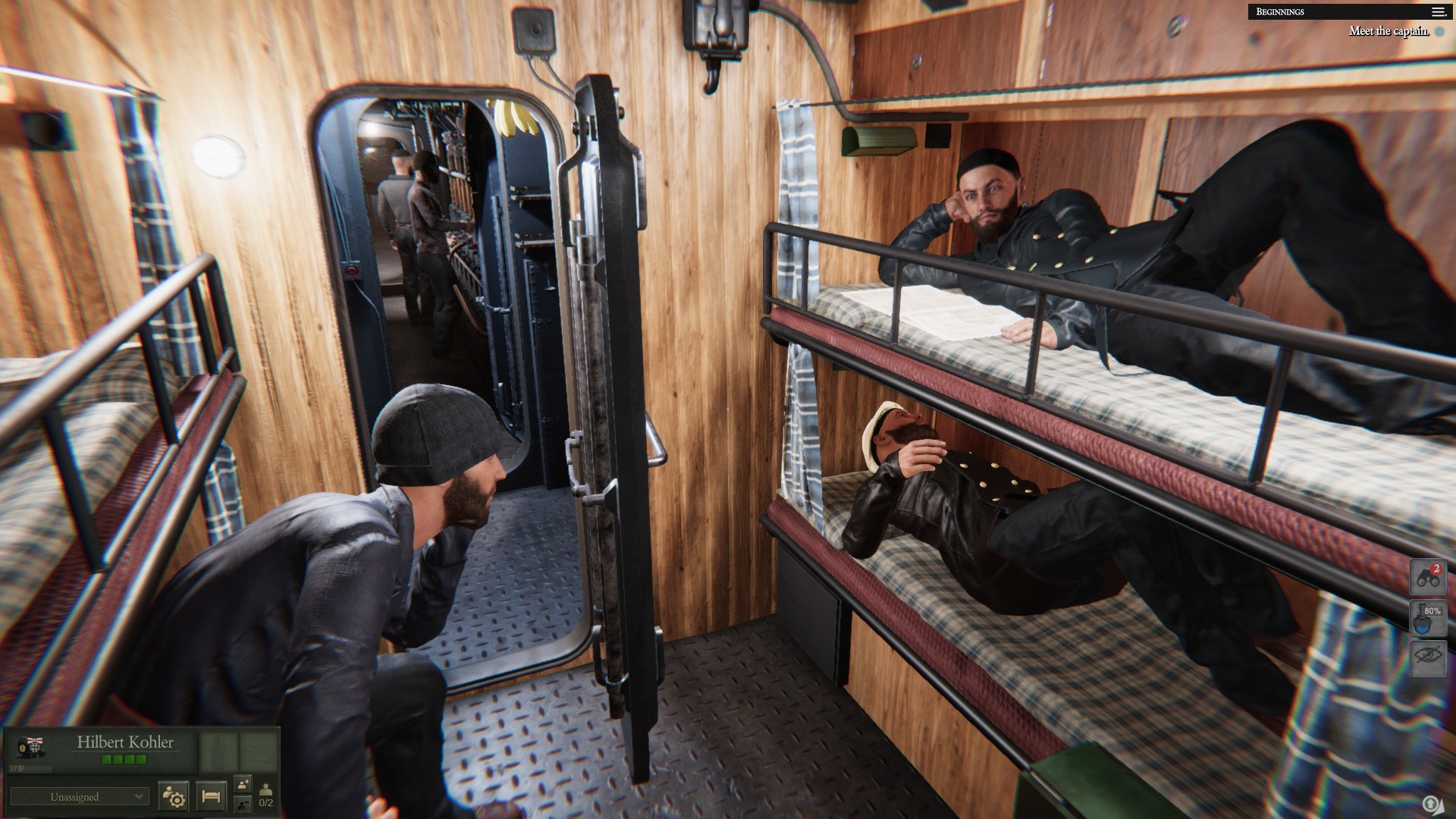 Silent Hunter meets Nantucket meets Bomber Crew, UBOAT has a novel subsurface soap opera side that feels a little underdeveloped at present, and the odd GUI quirk that may cause confusion come April 30, but surprising tactical depth, heartening patrol freedom, and truly wunderbar Type VII representations, means there's no danger the game will, like U-96, sink without trace. 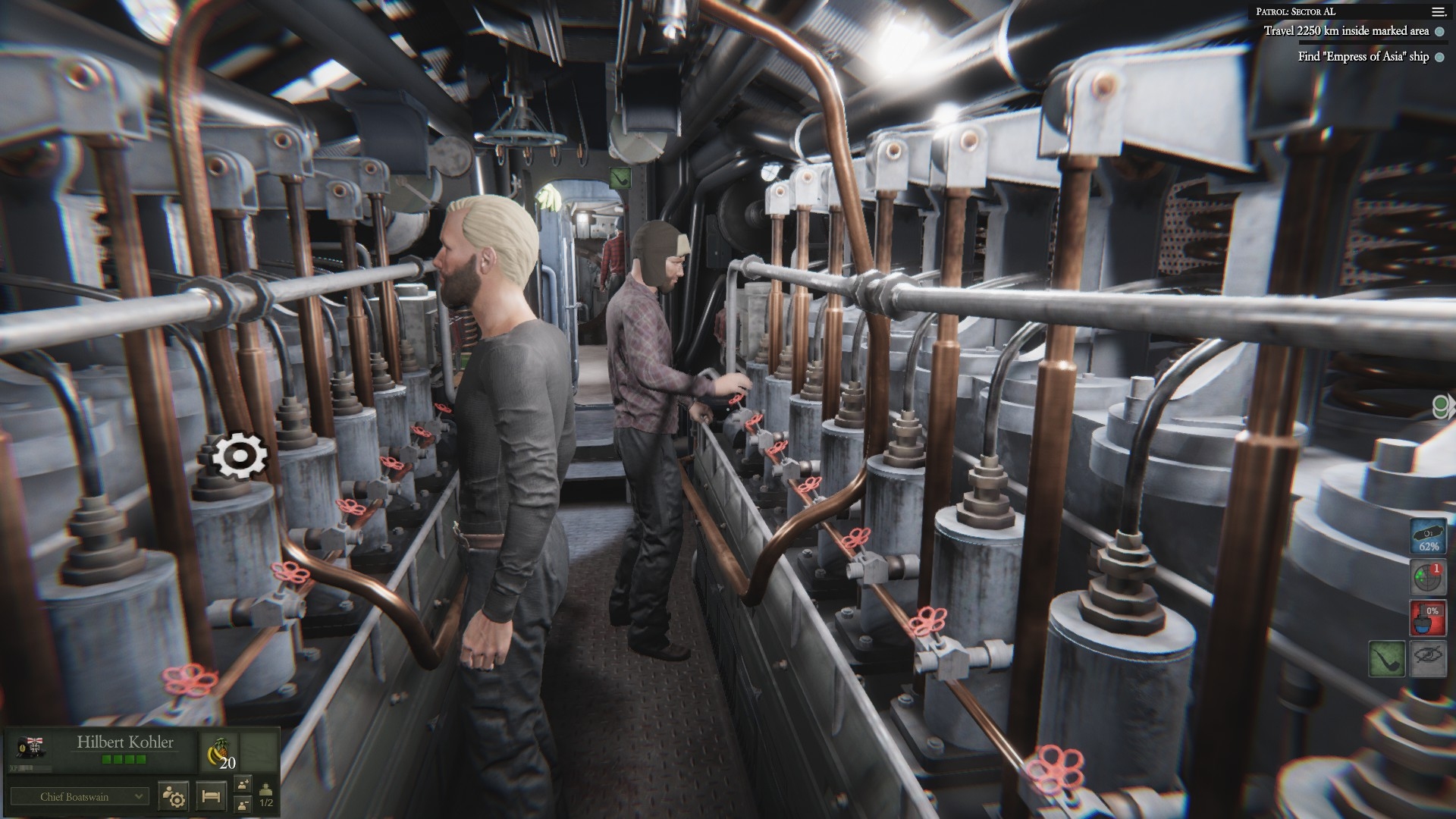 There's nothing standoffish about this Polish export. Within an hour of installing, courtesy of a pacy tutorial I'd walked the entire 60-foot length of my first command, squeezing through hatches, sidestepping busy crewmen, inspecting interactive equipment, and savouring cramped, cabbage-scented ambience as I went. I'd plotted a course out into the moody Atlantic via a globe-spanning chart. I'd punished a lazy submariner by making him clean the lav (other punishments are available) and, in effect, sentenced a more conscientious one to death by ordering a vital crash-dive during a salvage operation. Oh, and I'd sunk a British aircraft carrier too. The engaging instructional phase over, I then embarked on my first proper patrol, a patrol that ended prematurely off Portsmouth when an attempt to stage a diversion for a saboteur landed the previous night, succeeded rather too well. 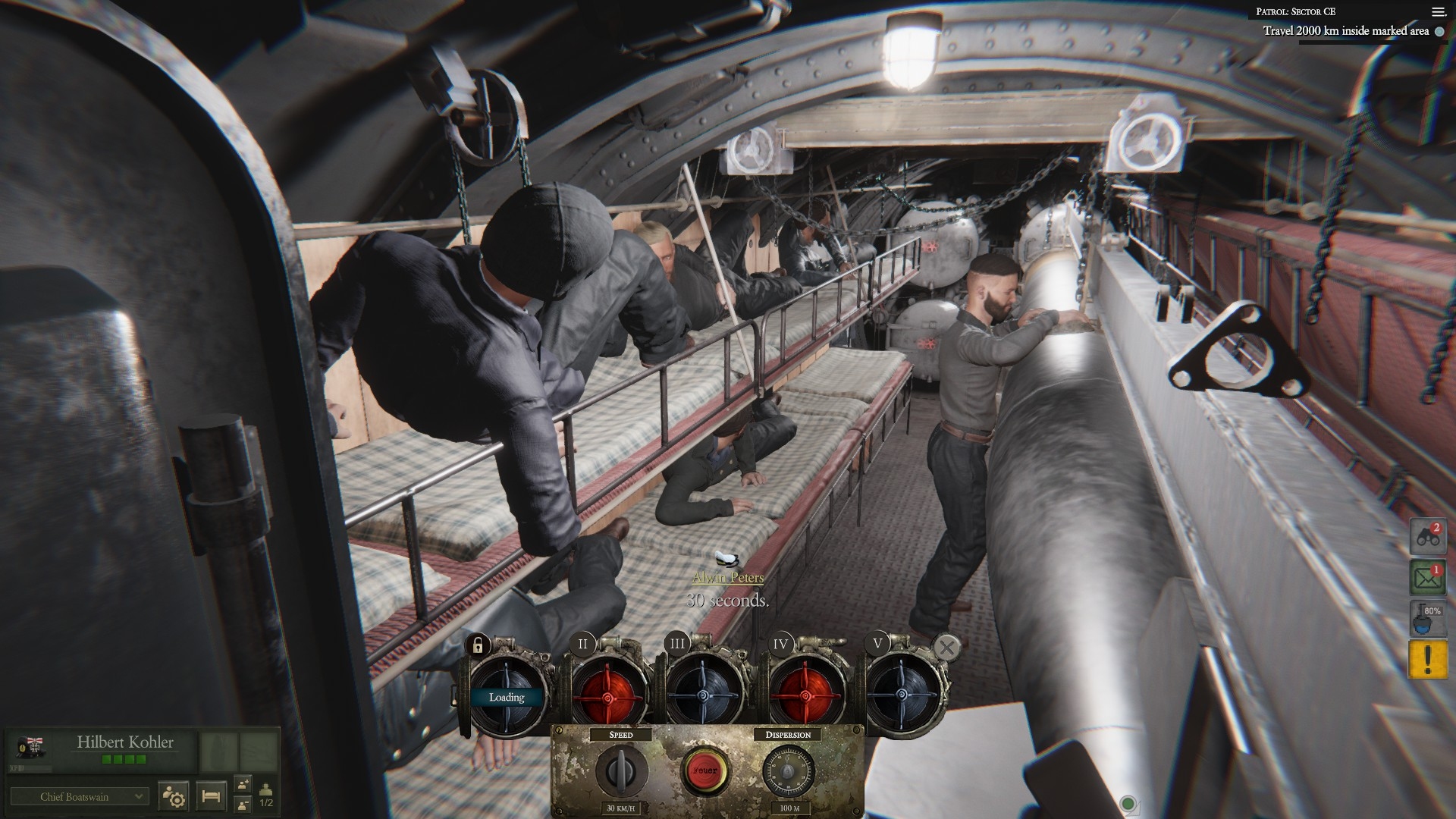 Real Type VIICs went to sea with around fifty souls aboard. Although Deep Water's steel coffins are significantly less crowded, there's a sense of closely packed humanity - of cheek-by-jowl intimacy - that you just don't find in other sub games. 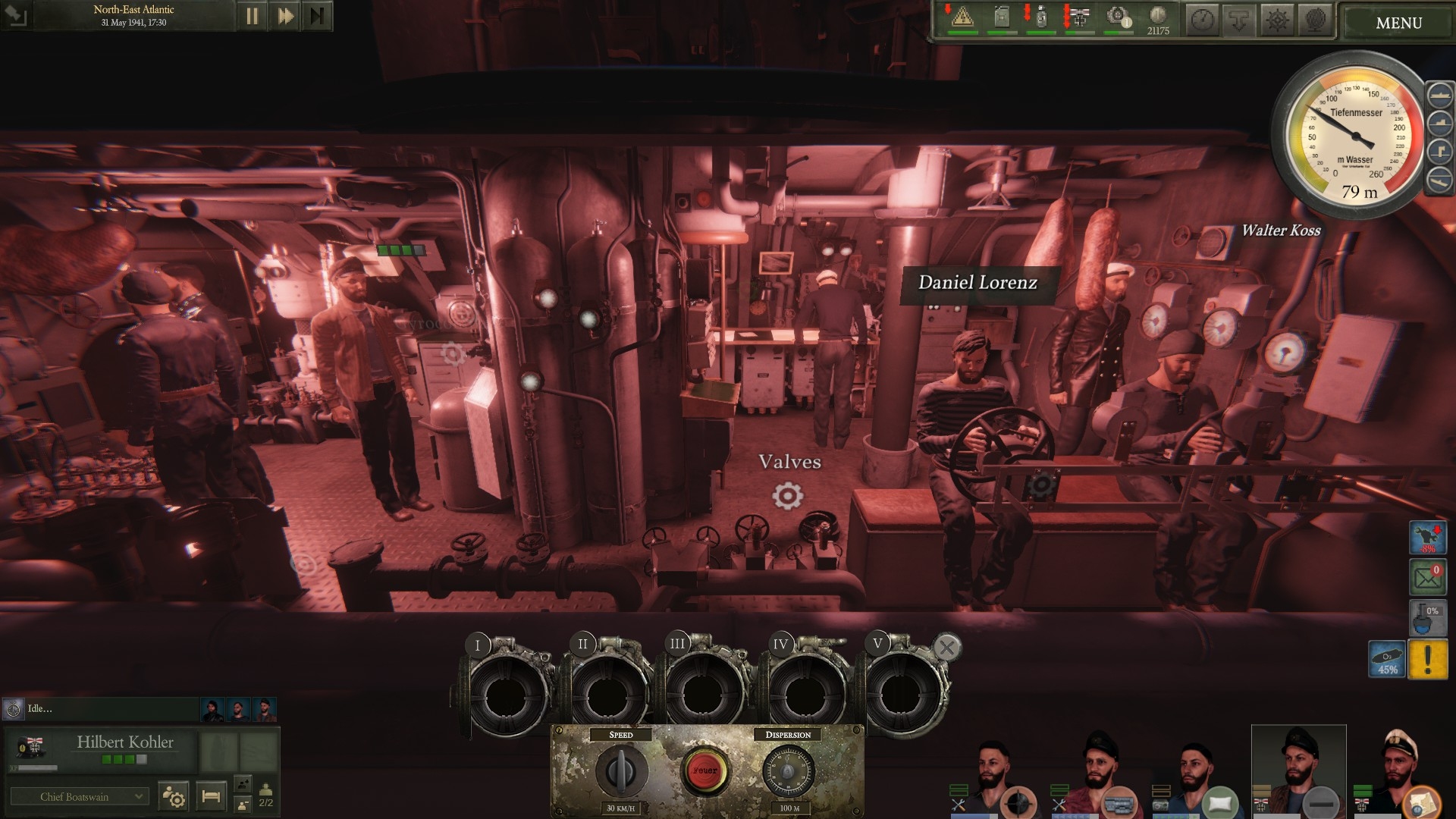 Most of the time you interact with your unwashed underlings through five* officers, high-ranking specialists who can be moved around the sub with mouse clicks in cutaway view or WASD keys in first person mode. 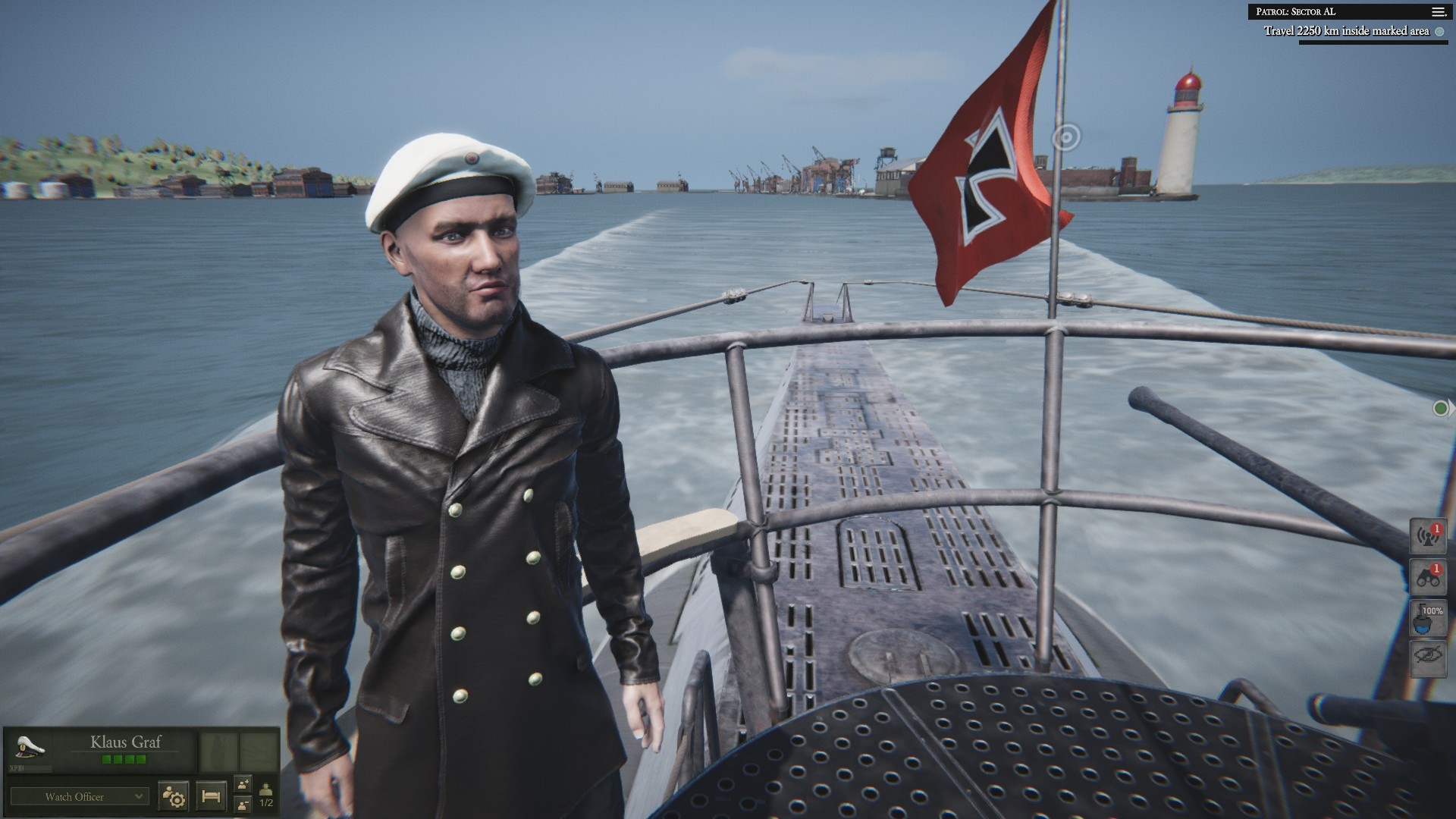 Assigning a particular officer to a particular station improves performance in a connected area be it dive speed, target acquisition, navigation or whatever. Alternatively, officers can be used to turn on and off special equipment (compressors, gyrocompass, echosounder...), as mules for transporting items such as ammunition, spare parts and food from compartment to compartment, and as avatars for manual first-person gunnery.

When horizons and skies are empty, the natural dutifulness and initiative of your men means there's little need to fuss (personnel head for bunks when tired, eat when hungry, and automatically come below and close hatches when diving, for instance). With the odd exception (compressor operation, bilge emptying, chart checking...) explicit tasking only seems to be necessary when an attack is in process or there's a problem aboard. 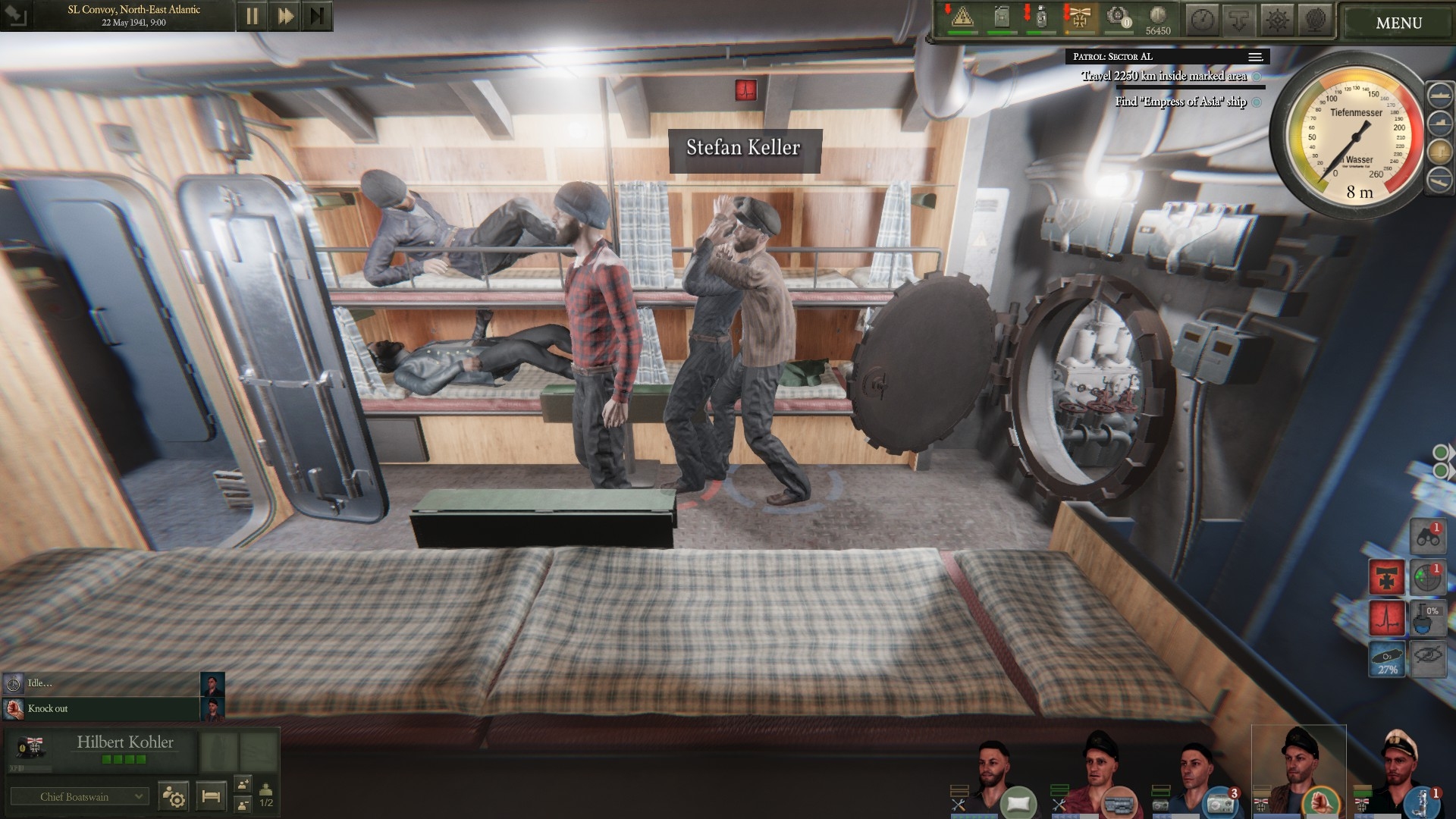 Thus far the few Human Resources crises I've encountered have all been solved with brute force, big band music or bananas. Steadily eroded by danger, fetid conditions, and bland victuals, a sub's overall 'Discipline' level ('Morale' might have been a more apt term) can be rebuilt by tuning into different radio stations, breaking out fancy foodstuffs (food can be requisitioned at the start of the patrol or salvaged from freighter flotsam while at sea), or by encouraging officers to spend time unwinding at the card table. Allow the stat to zero, and sailors may start loafing or losing it. In the pic above, my Chief Boatswain is restraining a distraught shipmate in the middle of a depth charge attack. While he's busy manhandling, he's not available to repair, bail, launch BOLD canisters, operate the bilge pump, or switch off noisy machinery, so it pays to keep a weather eye on Discipline. 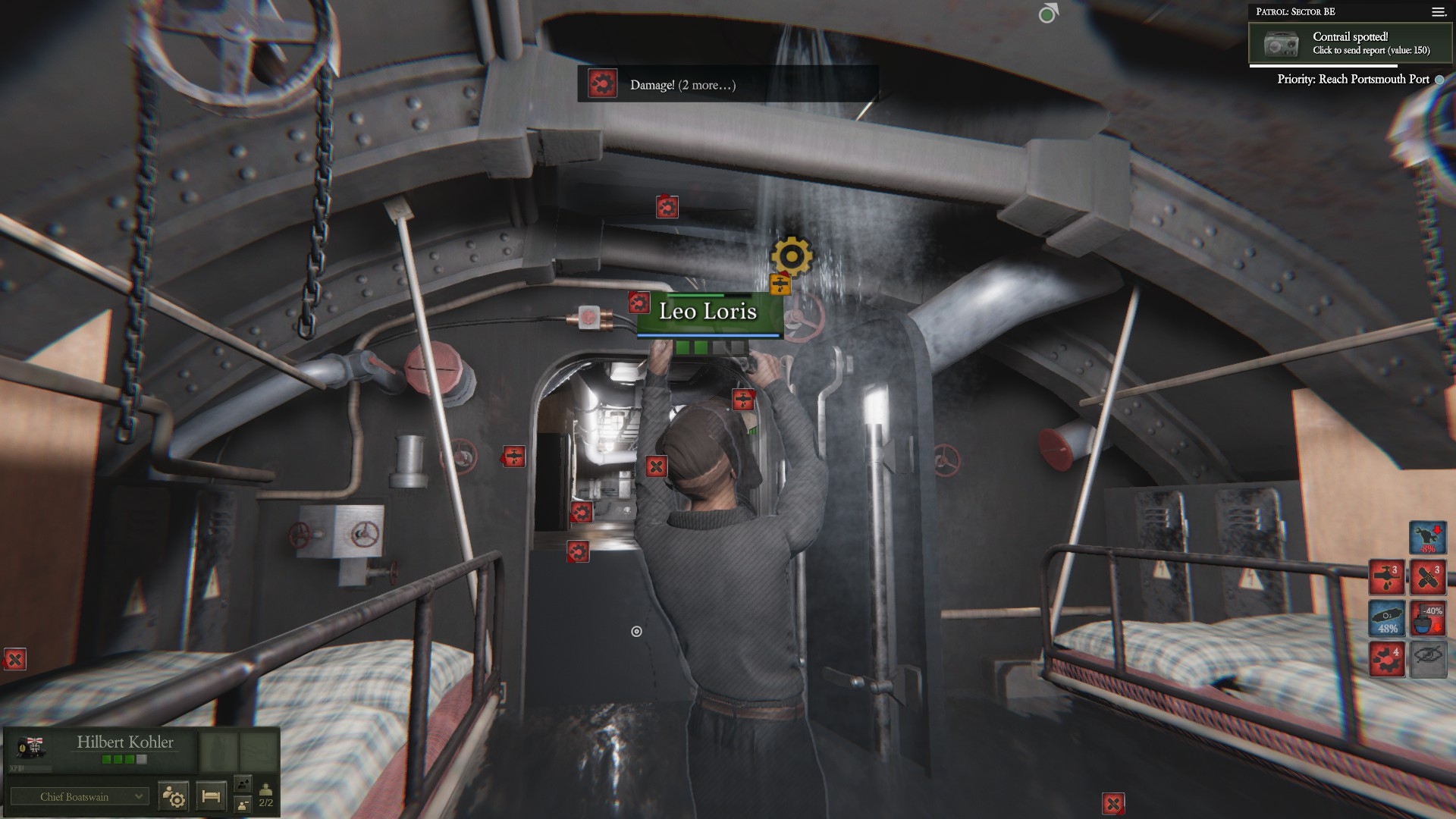 Unsurprisingly, mechanical problems tend to have direr consequences than disciplinary ones. There are times when the only way to save a severely depth-charged or bomb-bruised U-boat is to seal off a ruptured compartment, dooming all those inside to a ghastly demise. There are times too when no amount of hatch slamming, plate welding and bilge pumping will save a stricken vessel. In a genre that generally cuts short and conceals death agonies, UBOAT's slow, easily monitored extinctions can be strikingly grim. 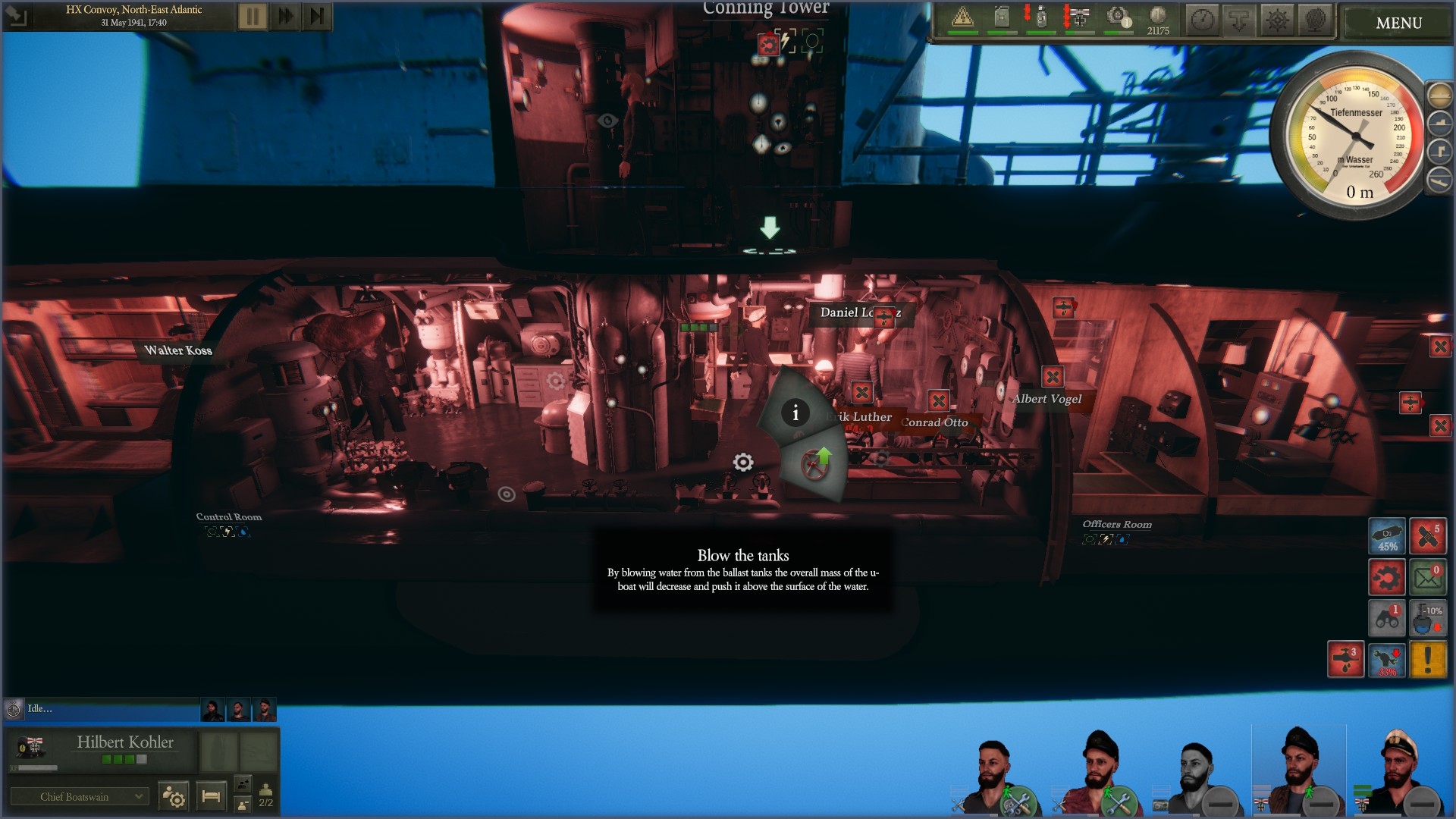 U-96, the sub mentioned in the intro, seemed to take an awfully long time to die (in reality it was probably no more than three minutes). A perfectly delivered depth charge salvo left red damage icons and wounded seamen everywhere. Realising our war was over, I closed hatches and tried to surface, but Archimedes was having none of it. Too deep for an evacuation attempt, there was nothing left to do but wait and watch as the water levels rose, the colour drained from the officer portraits, and the depth gauge needle swung inexorably towards its stop peg. Perhaps the men who perished from chlorine gas inhalation early in our descent (salt water + batteries = Cl2) were luckier than those who survived until water pressure finally finished the job that the corvette had started. 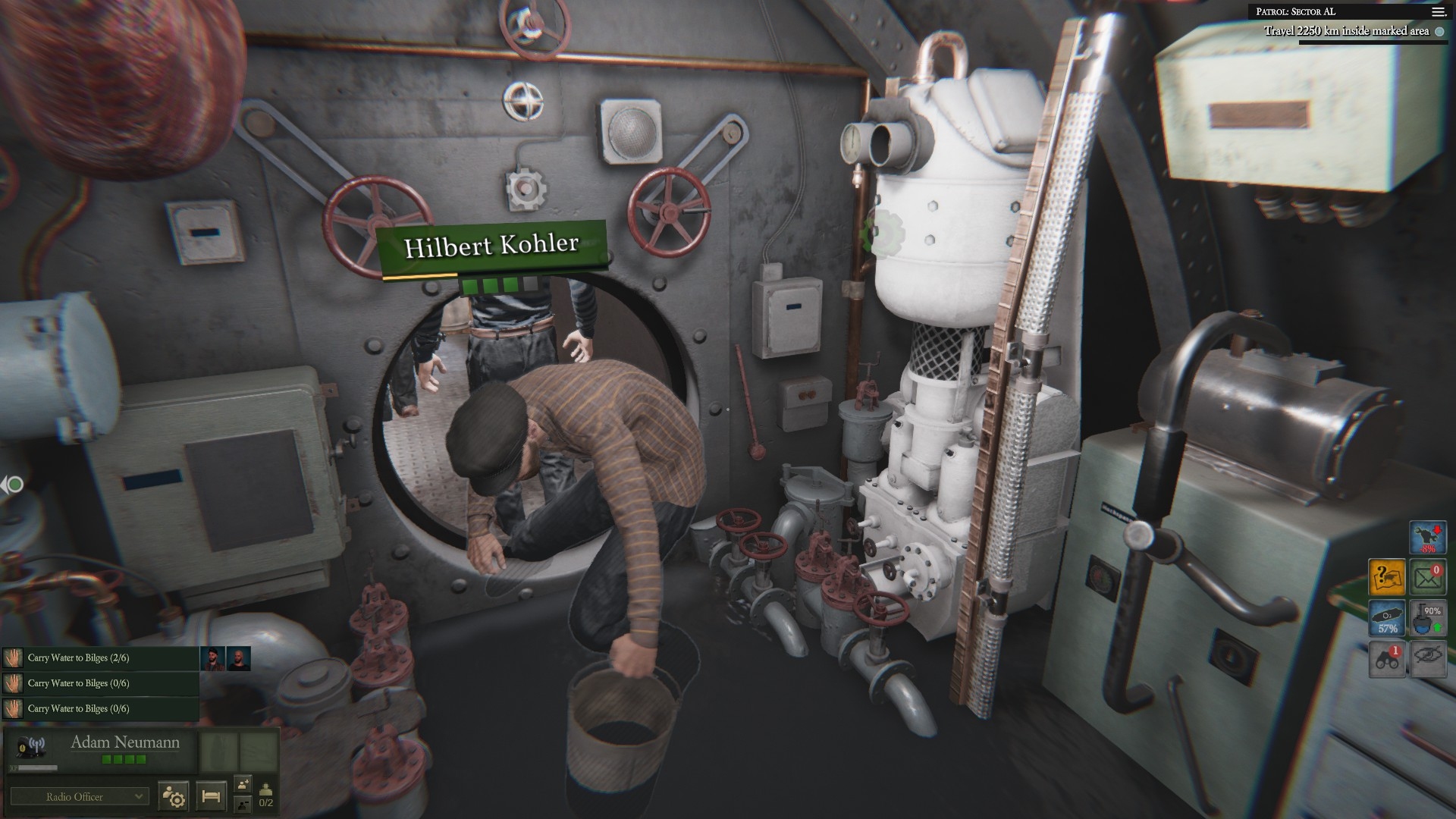 The tutorial in the demo is still a work in progress. Hopefully, the final version will spend a little longer explaining damage control as it's potentially one of the few confusing elements of UBOAT. Because the bilge pump struggles to drain compartments other than the control room, sometimes it's necessary to bucket brine into the centre of the sub, a process rendered less than intuitive by a gnomic inventory UI (bucketed water is treated as an inventory object). The first time I tried to dry out a semi-flooded but repaired sub, I got into a frightful pickle. 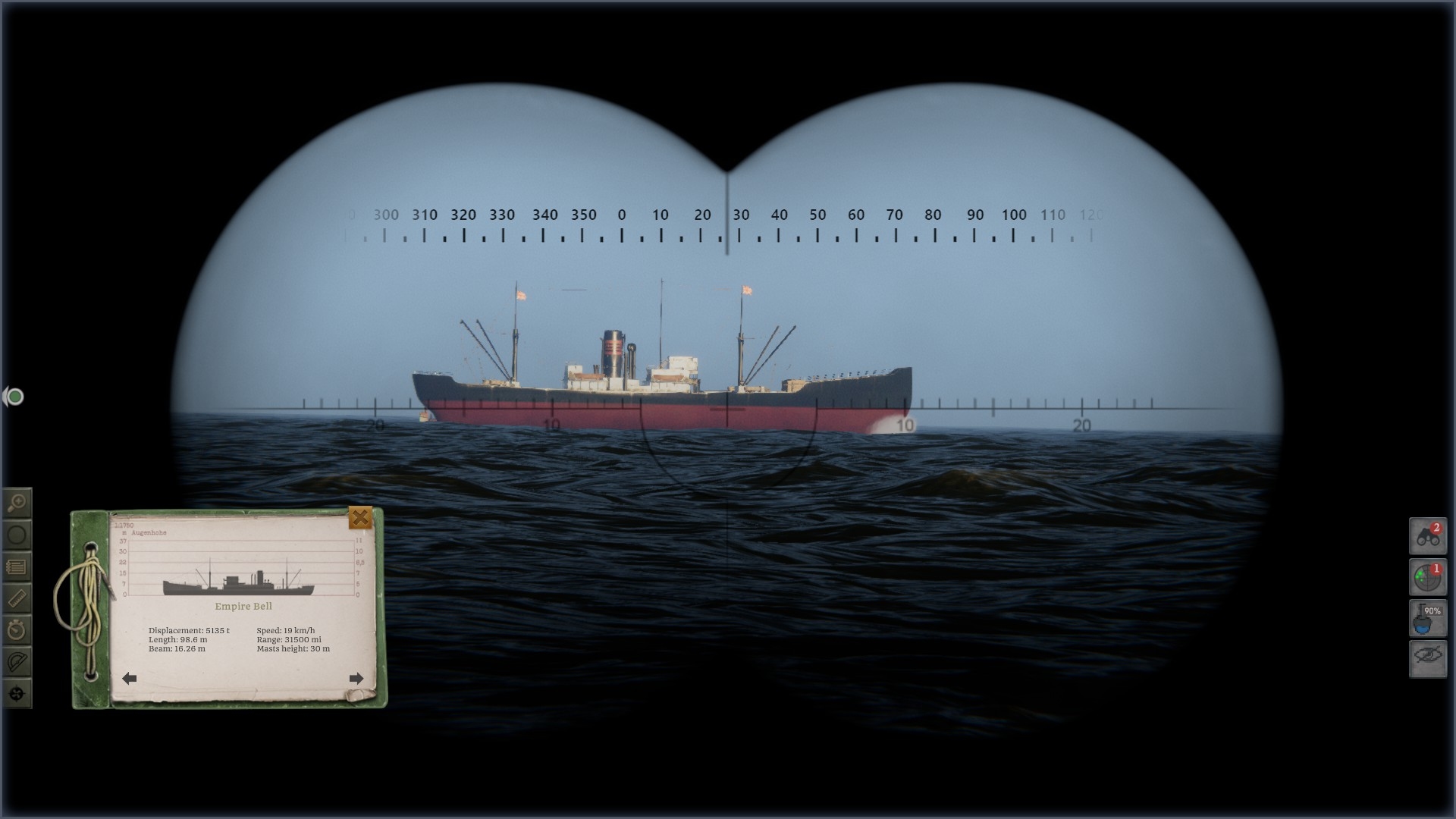 All orders can be issued while paused, a sensible concession that ensures hunts and damage control battles don't overwhelm. During interceptions officers assigned to the attack periscope or UZO steadily gather info on multiple or, if you prefer, single targets. You can speed up the process by entering data deduced from your own observations and chart calculations - target heading, speed, type etc - but I've not explored the game's simplified take on manual targeting, or played with torpedo settings, as yet. Watching the “hit chance” percentage slowly increase, then flooding tubes and firing a salvo, is thrilling enough at the moment. 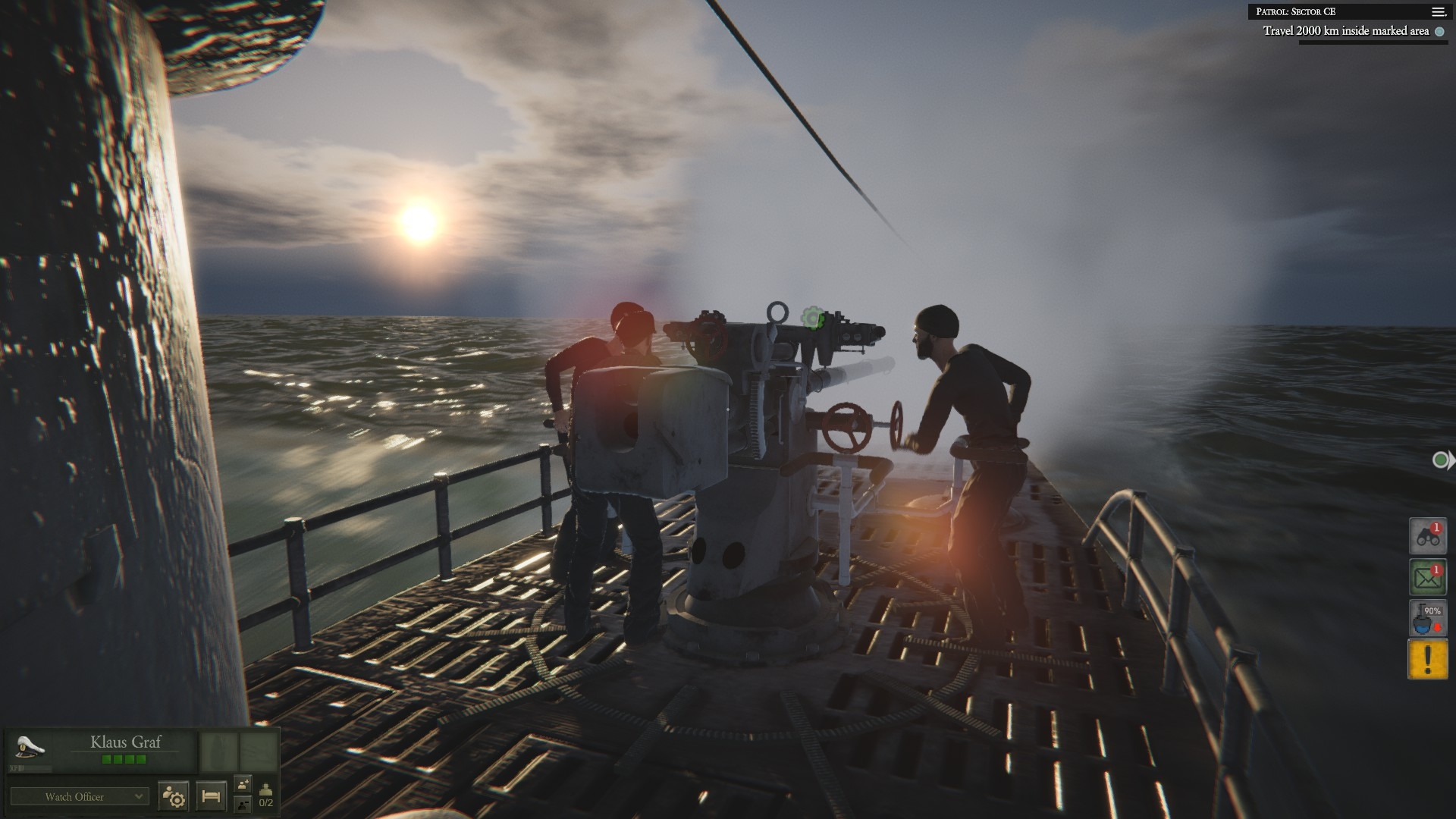 My few brushes with escort vessels and wandering Short Sunderlands suggest sub hunters aren't shy or inept. I was a little surprised to down a Flying Porcupine during one patrol, but perhaps my AI gunners (I wasn't handling the flak gun myself at the time) just got lucky. Few sub sims are more honest about the limitations of the Type VII's 88mm deck gun, that's for sure. Heavy seas turn gunnery targets, even nearby ones, into maddening jack-in-the-boxes. At times I've abandoned shell slinging and resorted to precious eels so difficult has it been to land shots. 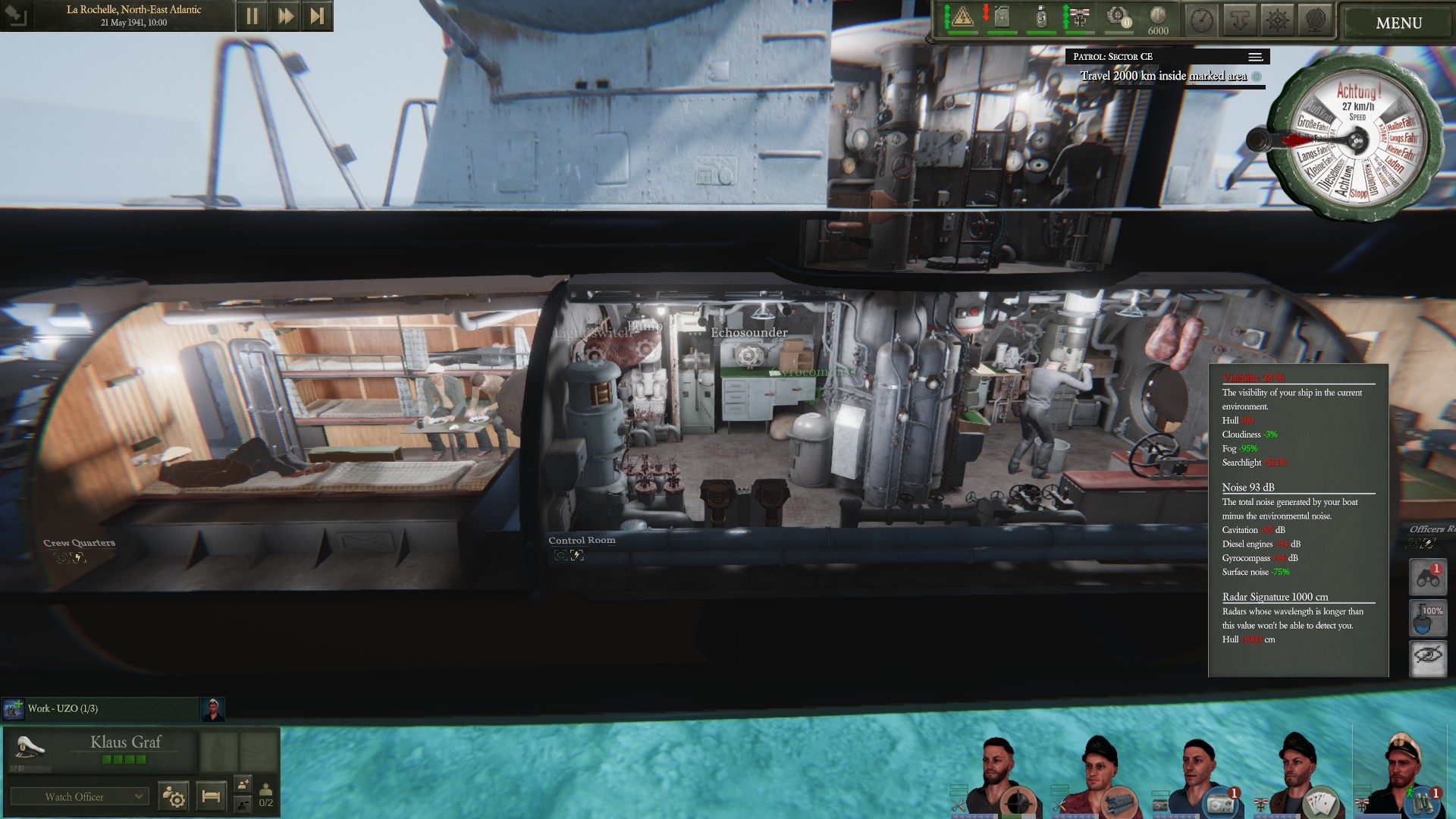 Happily, UBOAT's detection routines appear to be extremely sophisticated. Hovering your cursor over an eye-adorned icon on the starboard side of the screen reveals an impressive array of stats related to your visual and aural signature. Weather, sun position, hull exposure, engine use, cavitation, gyrocompass noise, activity aboard... it's all helps determine whether a U-boat is an invisible insurgent or an imperilled ire magnet. 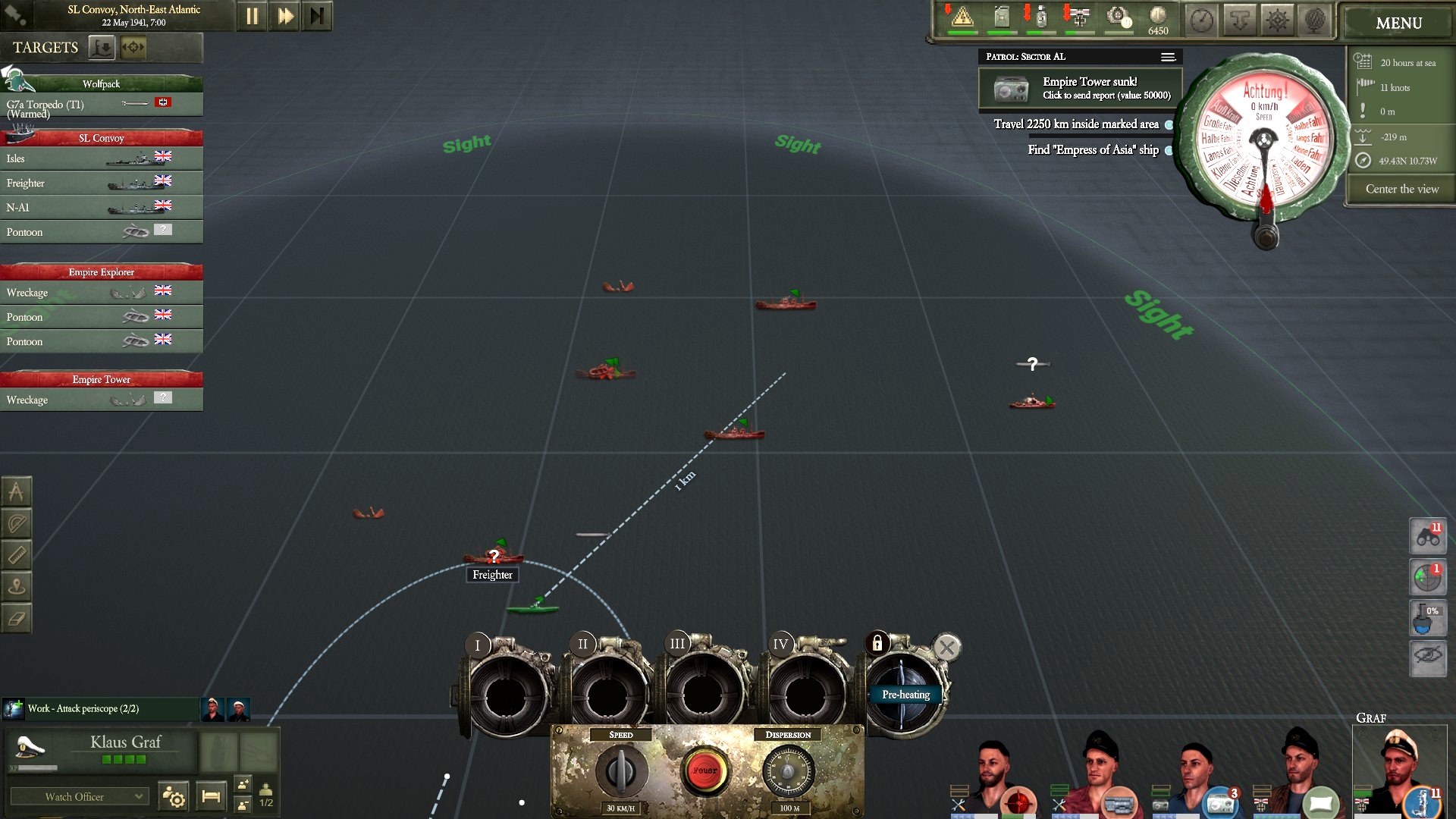 I definitely need to work on my cloak and dagger tactics as none of my first four campaigns have lasted longer than three patrols. On the positive side, regular restarts have convinced me that UBOAT's campaign engine blends unscripted tonnage trashing with colourful mission-style antics very nicely. 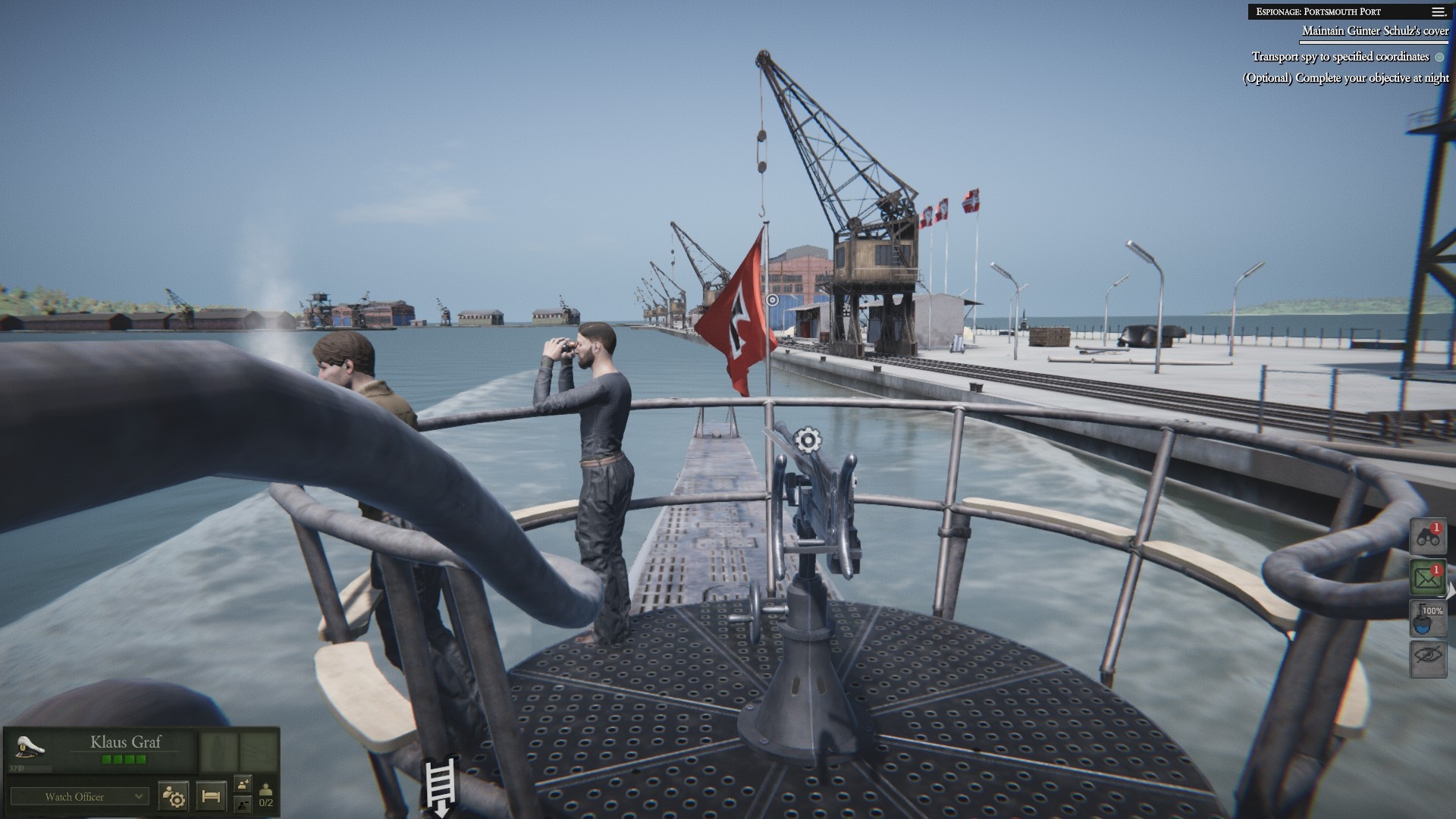 At the start of every voyage you wander the atmospheric quayside at Wilhelmshaven, La Rochelle or wherever, 'purchasing' supplies, recruiting personnel, initiating research projects (you need to leave a qualified officer ashore to conduct R&D) and choosing orders. The BdU always seems to offer a choice of three tasks. Usually most are 'Patrol grid square XXX' type affairs, but occasionally there are reconnaissance, agent delivery, and other less confrontational options on the table too. Execute missions successfully and you gain reputation points that can be spent on various 'favours' like extra officers, simultaneous missions, and - perhaps most tempting of all - the right to leave port with no directives at all except “sink enemy shipping". 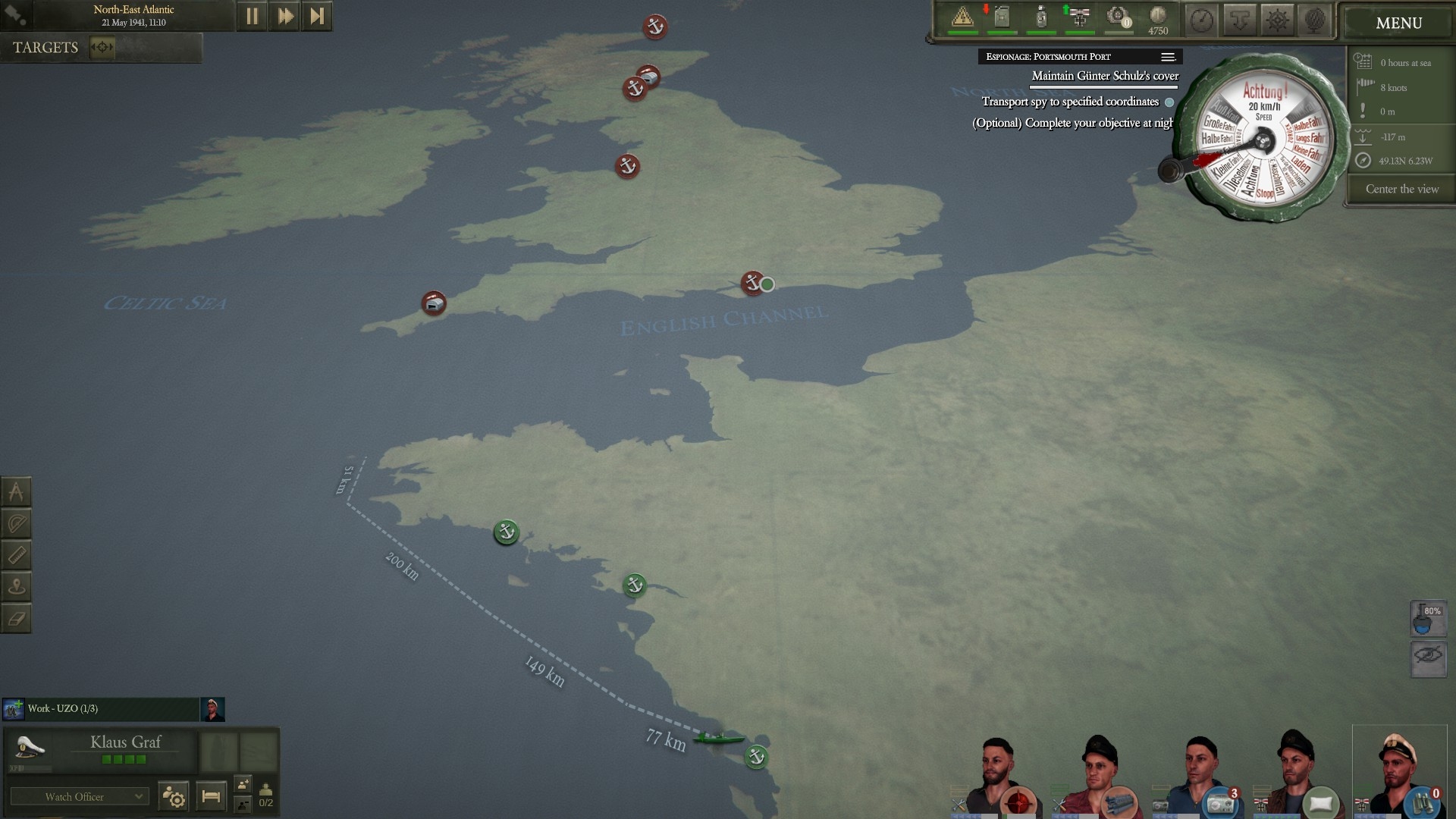 The preview build suggests UBOAT won't be miserly with its random encounters. Even if you choose to take advantage of 'checkpoints', unlockable chart nodes that allow speedy transit to and from oceanic areas, the game does, I believe, stop the clock if you come within detection range of a potential target or foe. 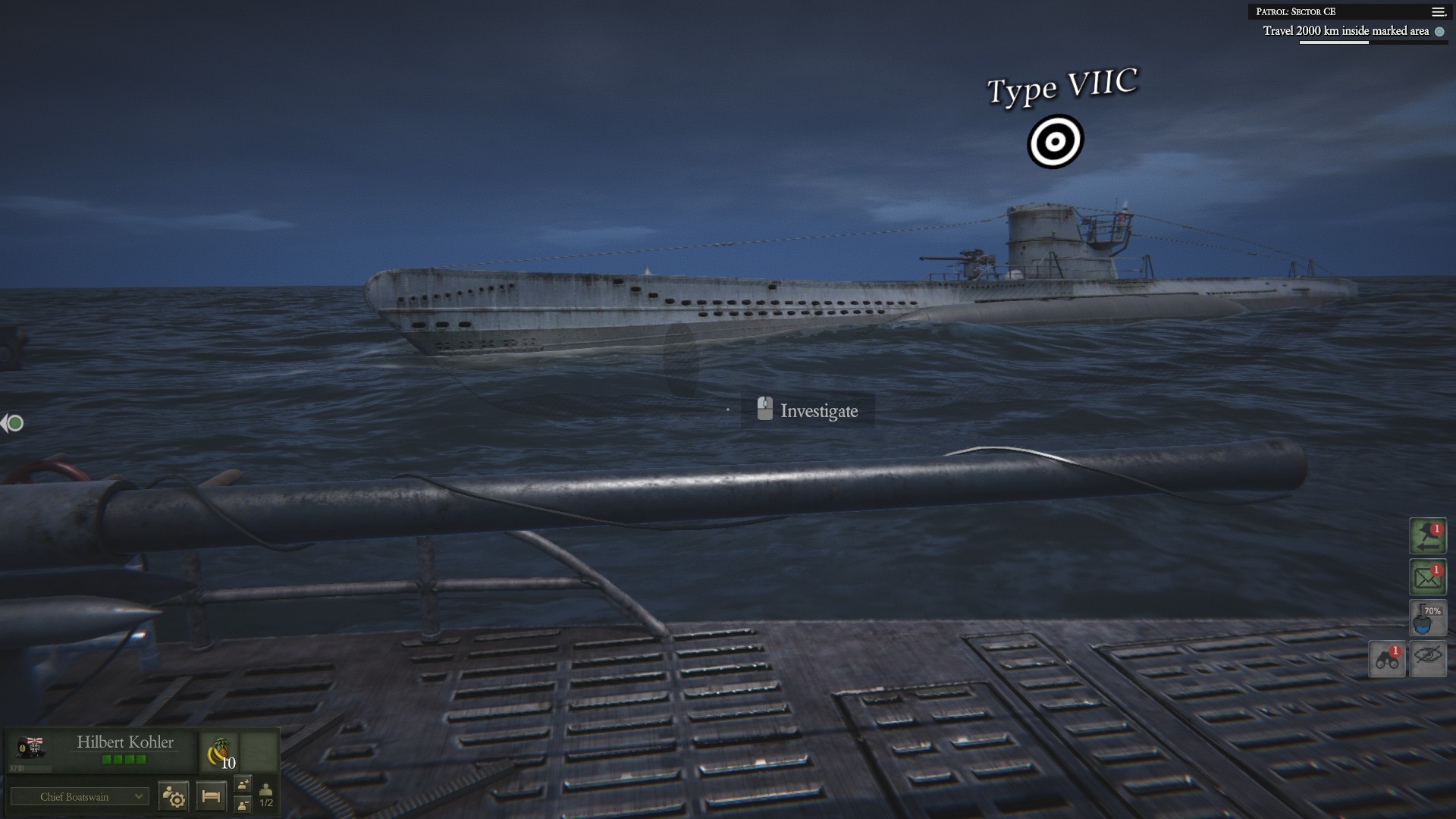 Last night, while roaming the seas off the Azores, I ran into a friendly vessel for the first time. The classmate was running low on fresh fruit so I sent my Chief Boatswain across with a sack of scurvy preventers. Novel, atmospheric experiences like this are a UBOAT speciality, but what really excites me about Deep Water's debut title is that behind the sideshows lurks a remarkably solid and well-equipped unscripted sub sim. With the Silent Hunter franchise rusting away quietly at a Romanian dockside, and Usurpator's recent offering aimed squarely at sociable submariners, UBOAT should be bosom-clutched with great enthusiasm when it surfaces in eleven days' time. 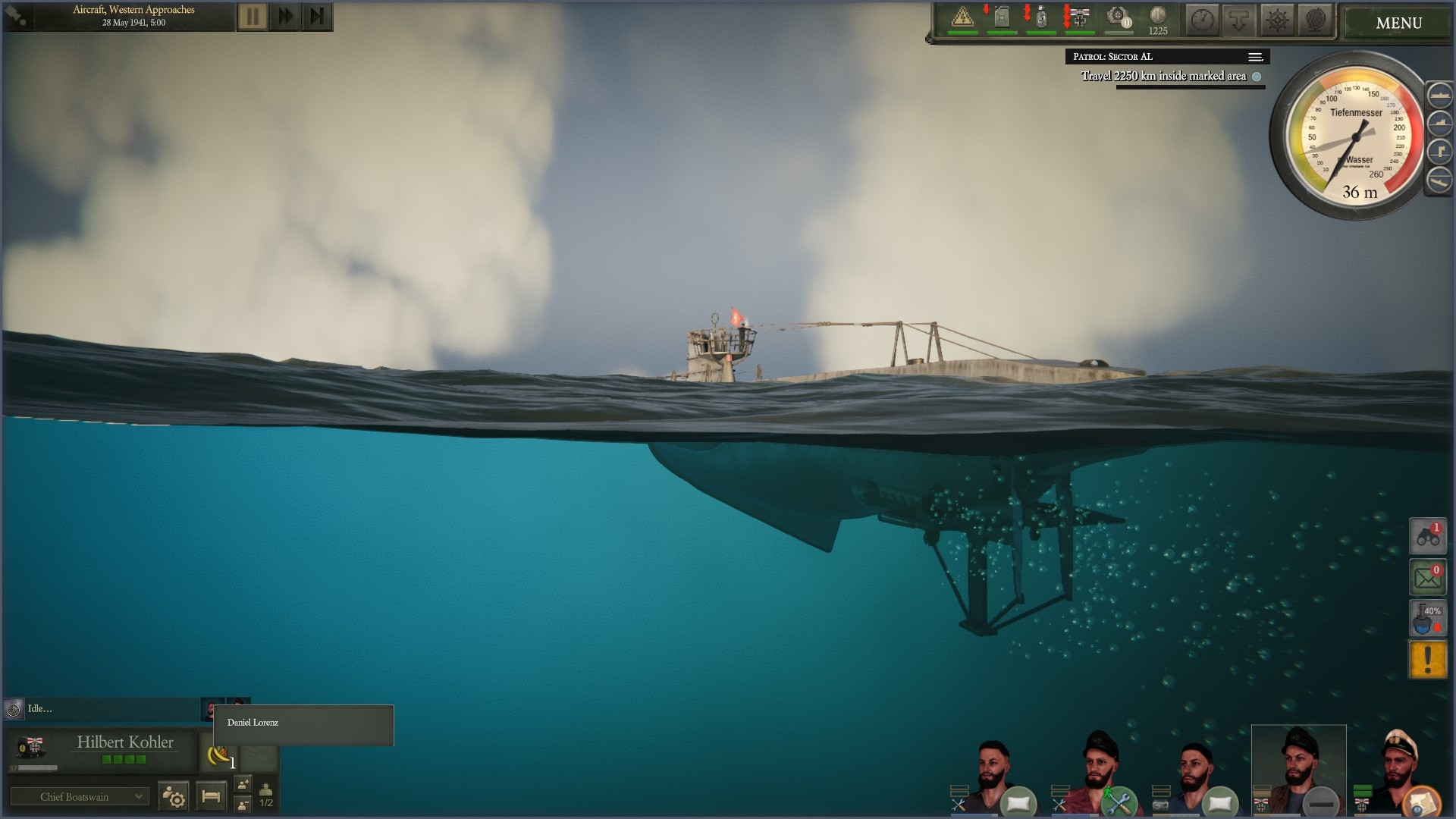