Tiny Swedish studio Usurpator AB has taken a considerable risk with Wolfpack (Early Accessible in approximately two hours' time). Because the U-boat sim that started life as the history-shy HMS Marulken is a co-op multiplayer diversion and proud of it - because it shuns labour-saving shortcuts and data-blurting screen furniture the way a fangtooth shuns sunlight - it runs a serious risk of disappointing inattentive Silent Hunters expecting a de facto SH5 sequel. 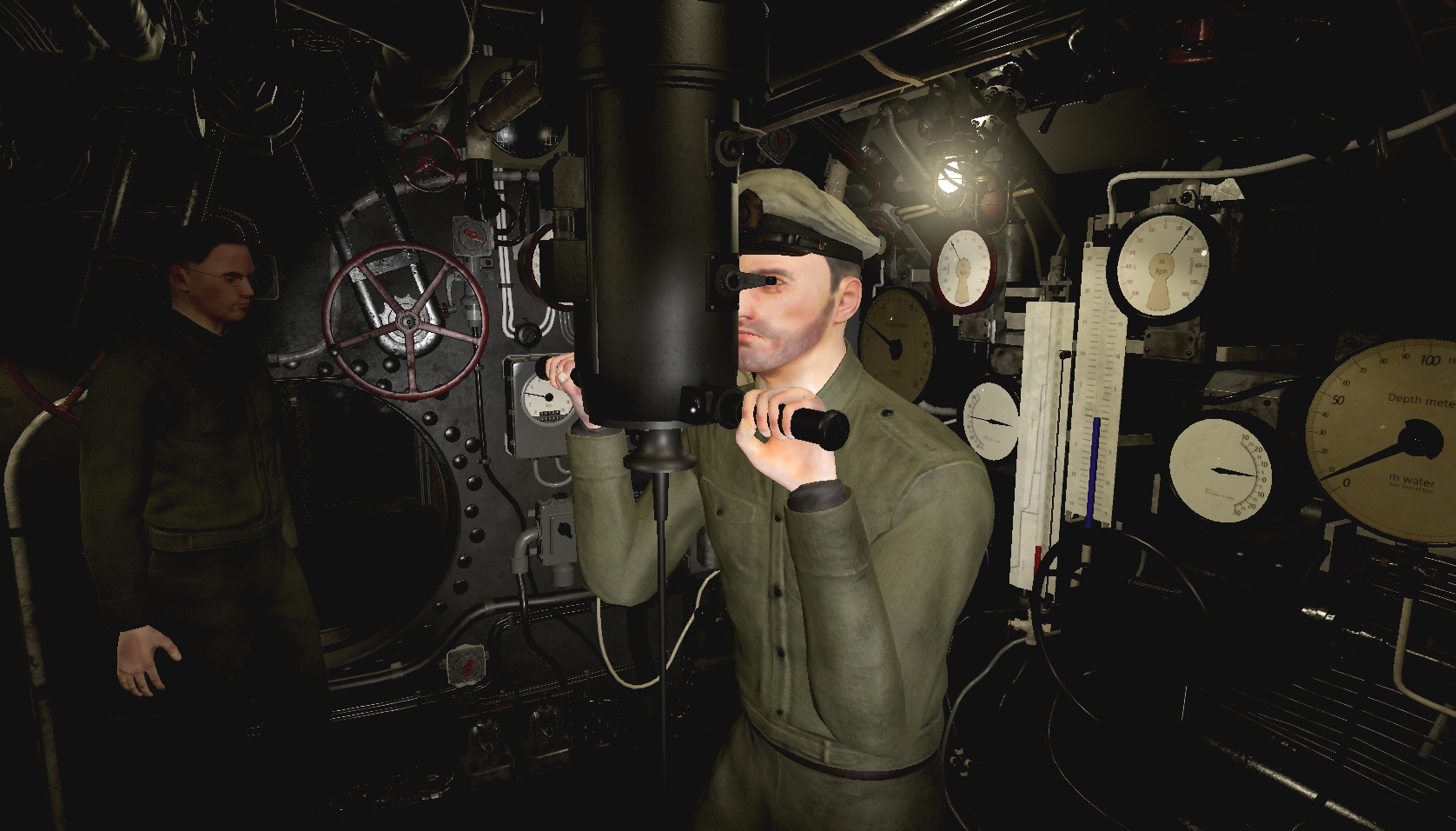 In its current (March 15, 2019) form Wolfpack has little to offer the solo submariner except sweat, freneticism, and a succession of watery graves. While physically there's nothing to stop you manning one of the sim's splendidly tactile Type VIIs on your tod, and kills aren't impossible when playing alone, if you do decide to lonewolf you are going to be tearing about like a blue-arsed dipteran most of the time. Activities accomplished with a single key stroke in traditional WW2 sub sims often involve several minutes of frantic tap twirling and dial scrutinising in Wolfpack. 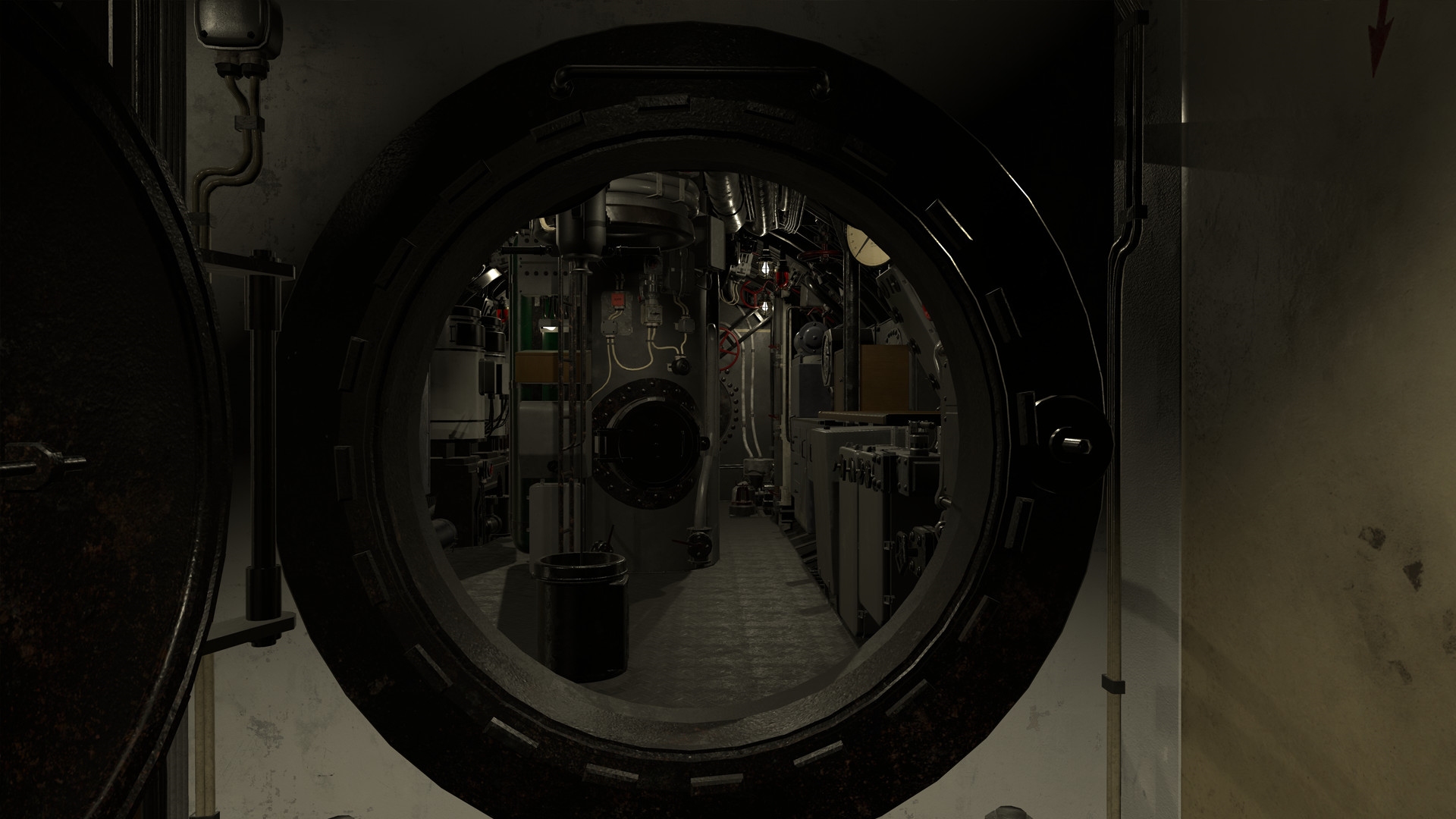 There's no “Press P to go to periscope depth” and “Press L to lock a target/program a torpedo” here. Realising that convenience isn't everything - that many of the most interesting jobs aboard a U-boat have been rendered colourless by decades of well-meaning ludological shorthand - Usurpator simulate in the purest, most uncompromising sense of the word. The intestinal clutter lining the clammy curving walls around you is your interface. 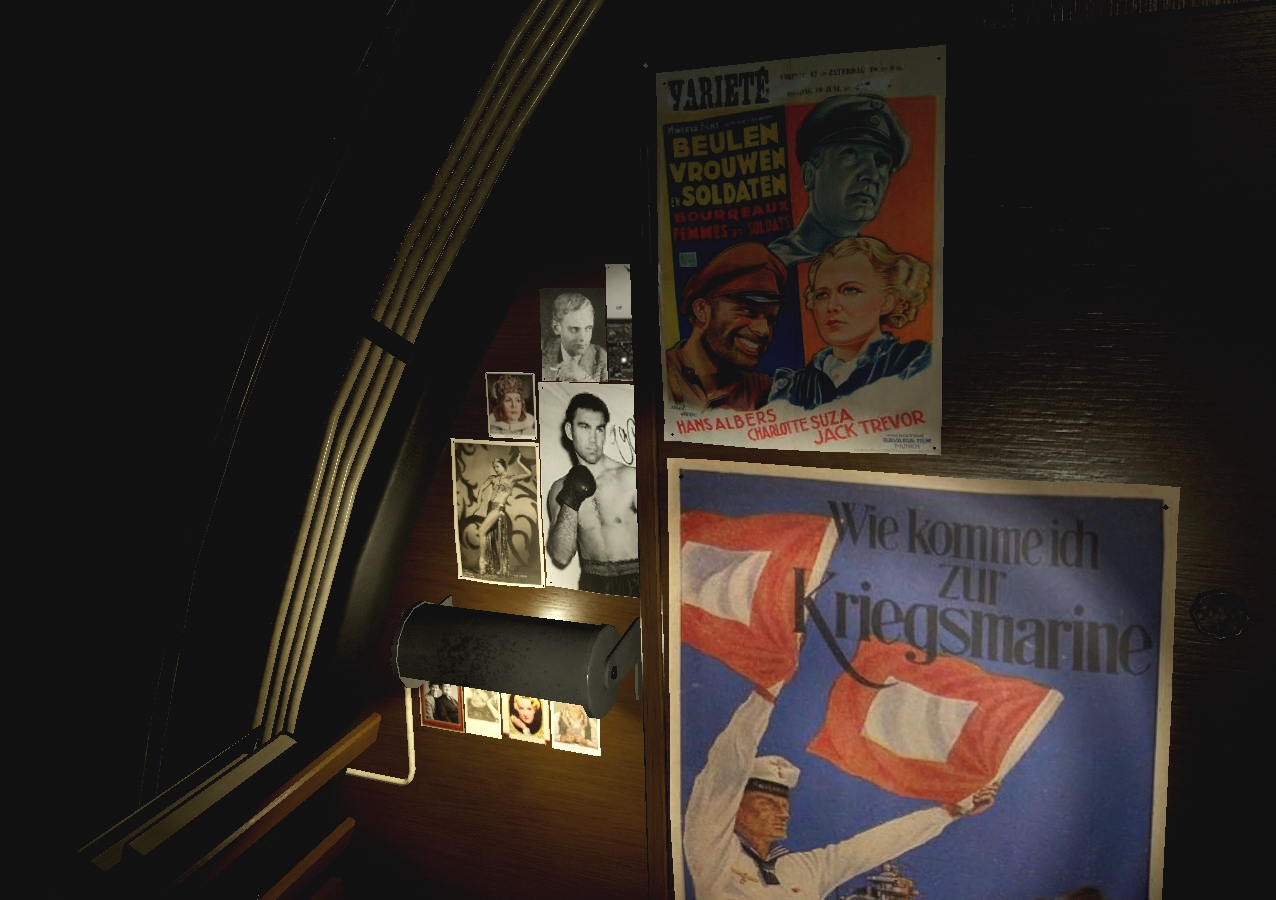 Up to five collaborating humans can share a single pressure hull and up to four U-boats can convoy molest in company. Engine rooms, torpedo compartments, galleys and heads aren't represented. Impassable sealed hatches confine players to an atmospheric central control room, the conning tower interior, and a pin-up festooned radio shack area. When surfaced the bridge, deck gun and AA gun are accessible too. 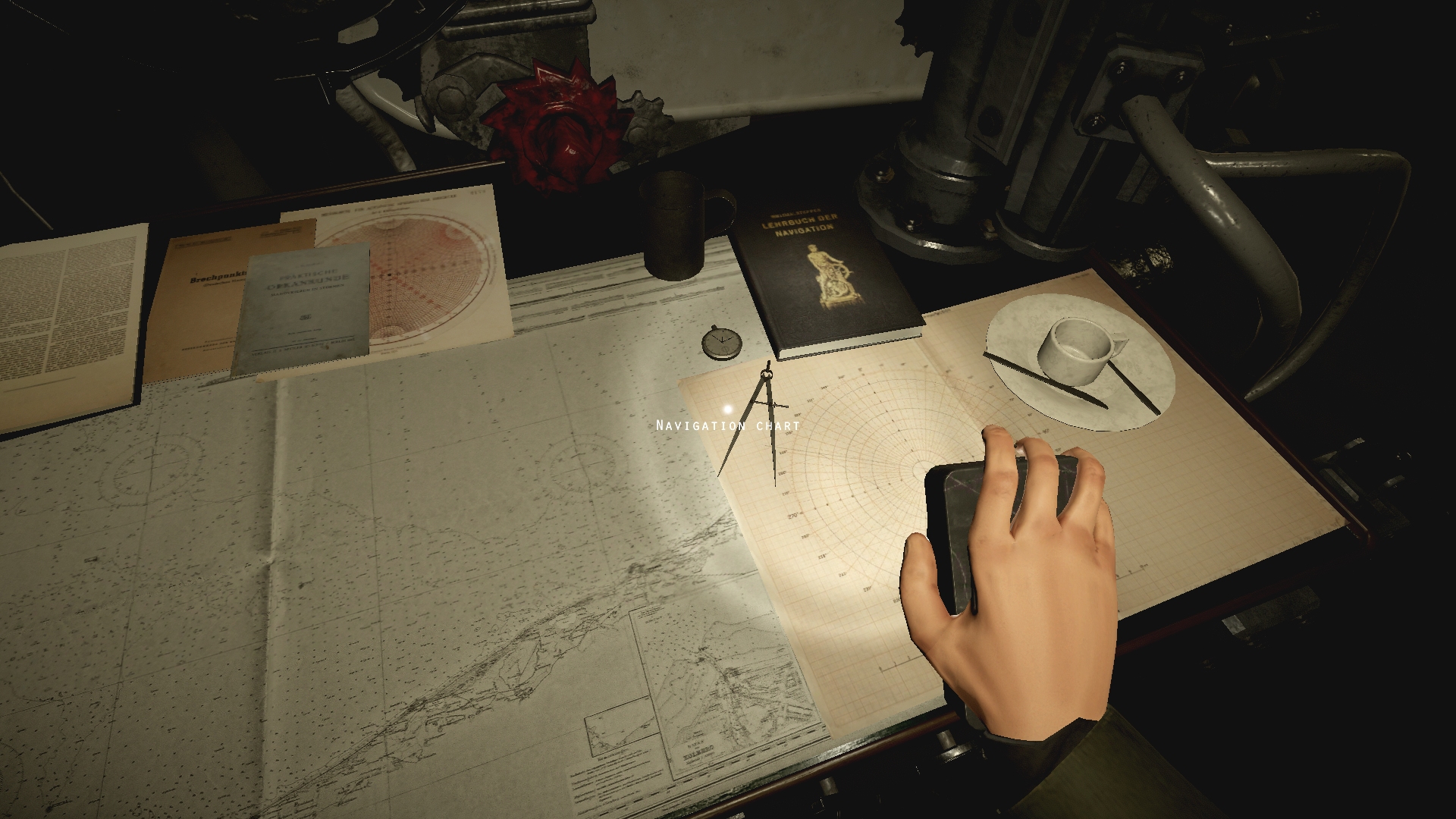 Assuming you're the diligent type, your chosen role (captain, helmsman, planesman, navigator, or radio operator) determines where you'll spend the majority of your time. Choose to play in one of the latter four roles and you may spend the entirety of an engagement cooped below deck, peering at twitching needles or graffitied charts, or listening intently to the tell-tale signs that betoken prey or perils. Those trusty cameras that obligingly track launched torps and let you admire sun rays playing on the rust-streaked flanks of your submerged steed? Sitting crated on the quayside at Wilhelmshaven or Kiel, verboten non-standard modifications. 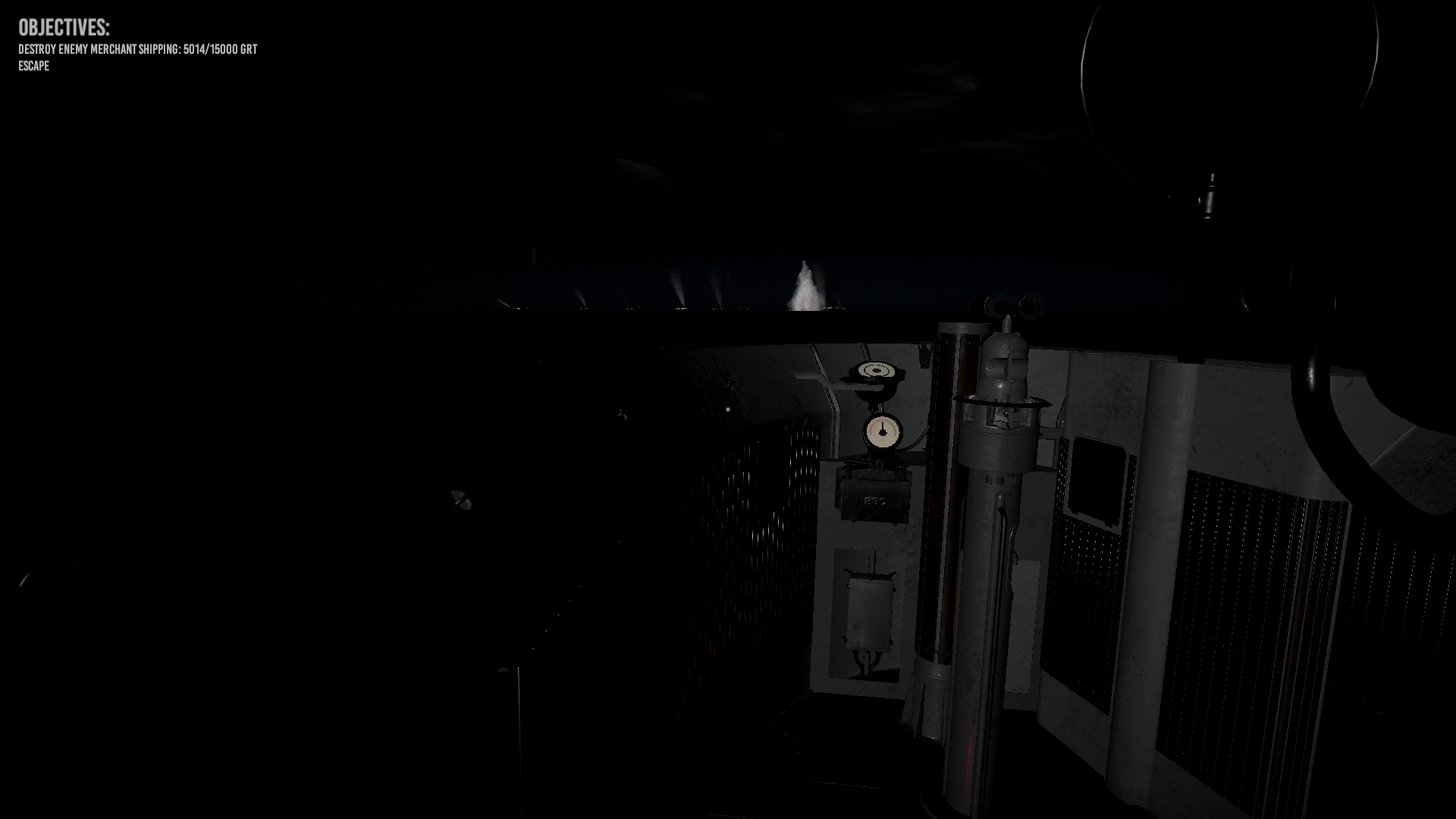 My limited experience of multiplayer actions (Thus far I've spent most of my time quietly learning the ropes in deserted U-boats) suggests the lack of view options won't cause great resentment. You're generally far too busy doing your bit/duty to worry about understandable camera limitations. At present as the skirmish generator - the sole play mode in the preview build - always seems to place subs no more than a half hour cruise from potential victims, there are few opportunities to fire-up the sim's working gramophone or regret the fact that scattered paperbacks in the radio room are unopenable decorations. 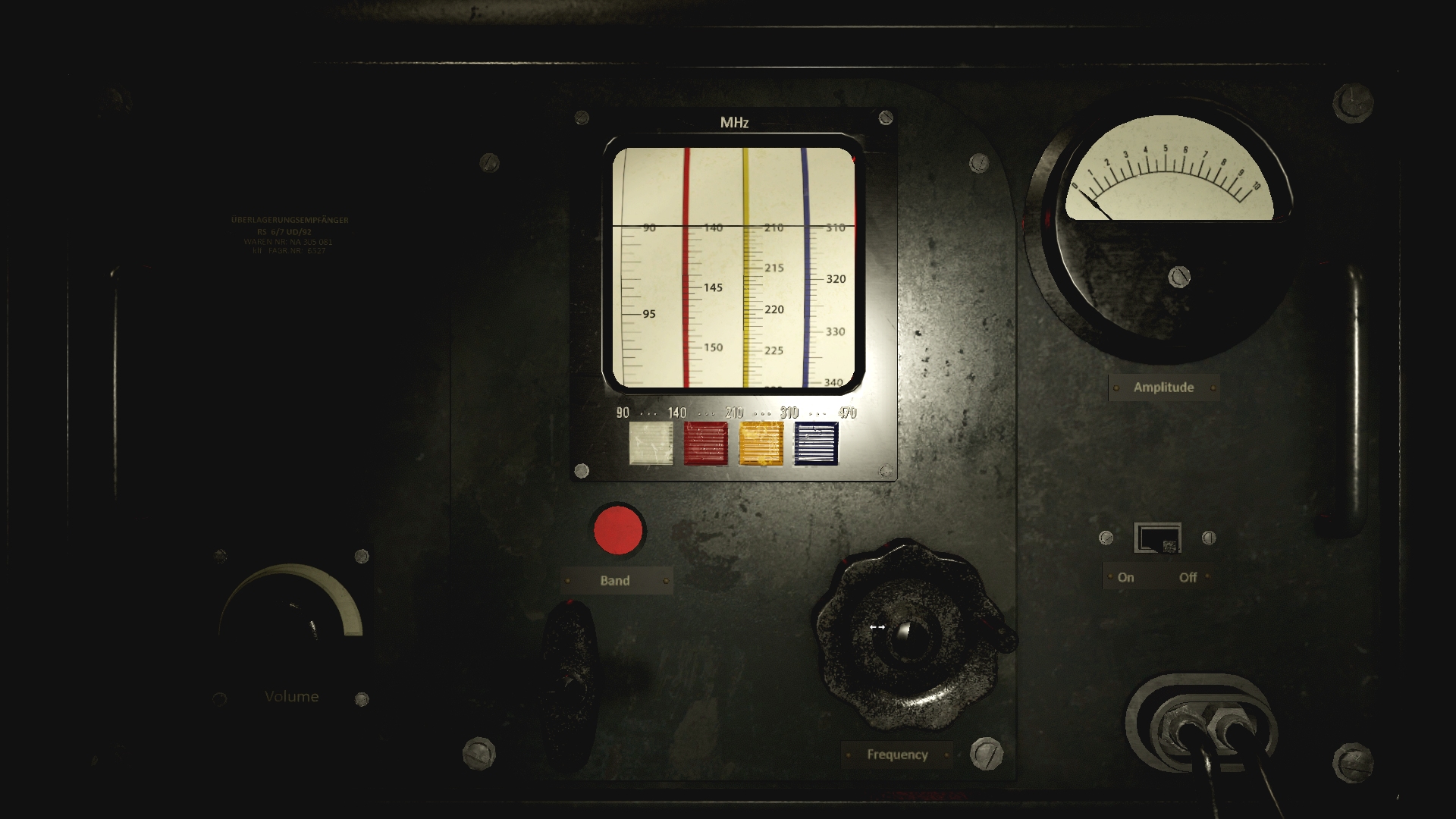 Even on a fully crewed craft, periods of idleness are rare. Take a role like the radio operator for example. Not only is this individual expected to locate prey using the hydrophones and radio direction finder - two distinct and far from simple pieces of kit - they must also communicate with other wolves in the vicinity using a nicely simmed Enigma machine. 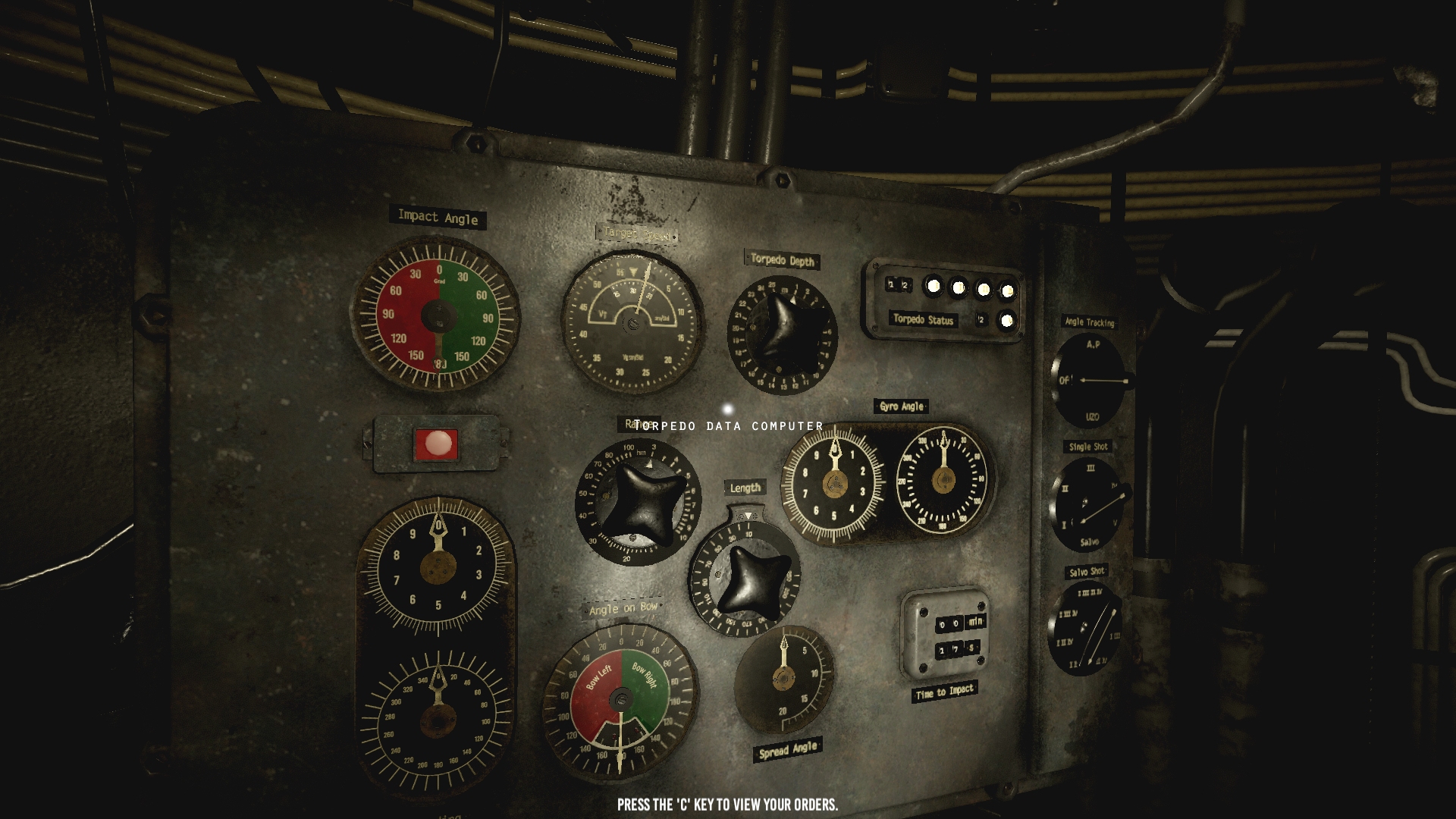 Implementing the skipper's course commands appears at first to be a pretty undemanding remit, but even a rudder adjuster has other responsibilities. In the tense moments before eels emerge from their dark nooks, strictly speaking it is the helmsman who must ensure the various dials on the Torpedo Data Computer in the conning tower are sensibly aligned. 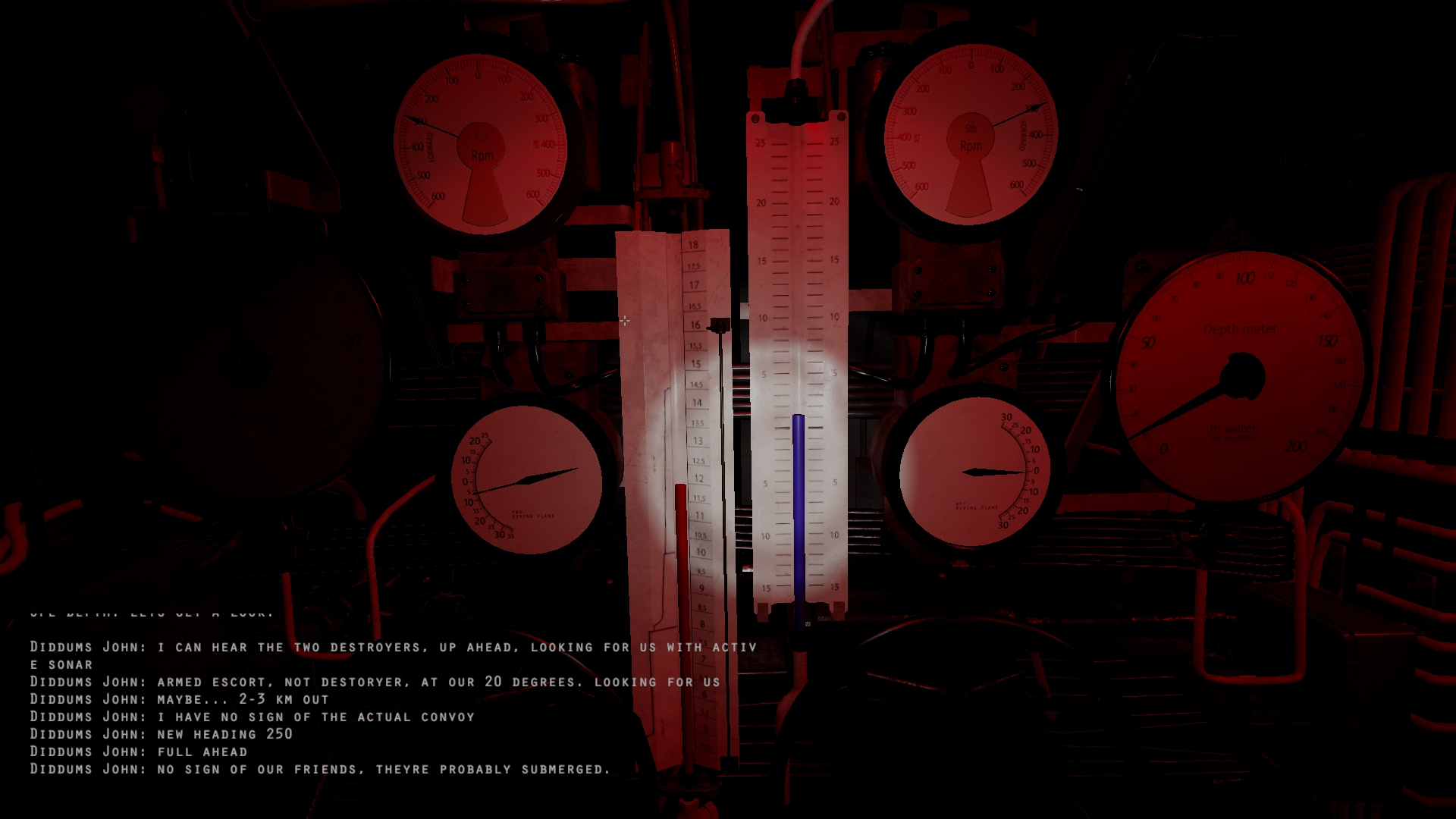 The job I know best at this point is that of dive officer/planesman. I'm compressor literate and have learnt how to furiously twirl the two big wheels at either end of the control room to flood the main ballast tanks in readiness for diving. Using the smaller 'negative tank' (valves located close to the conning tower ladder) in combination with tilted fore and aft planes, I flatter myself I can now perform a fairly prompt crash dive when called upon to do so. Maintaining periscope depth is something I still need to work on, however. Unlike SH Type VIIs which loiter obediently just below the surface without player intervention, Wolfpack Type VIIs have a plausible tendency to rise or sink when left to their own devices. Take on the role of planesman and keeping the meniscus of the thermometer-like Papenburg meter (one of three depth gauges at your disposal) precisely where it should be can become an obsession. Fixated on small but crucial tasks like this, you get an inkling of how people survived the appalling emotional strain of submarine warfare without mentally disintegrating. 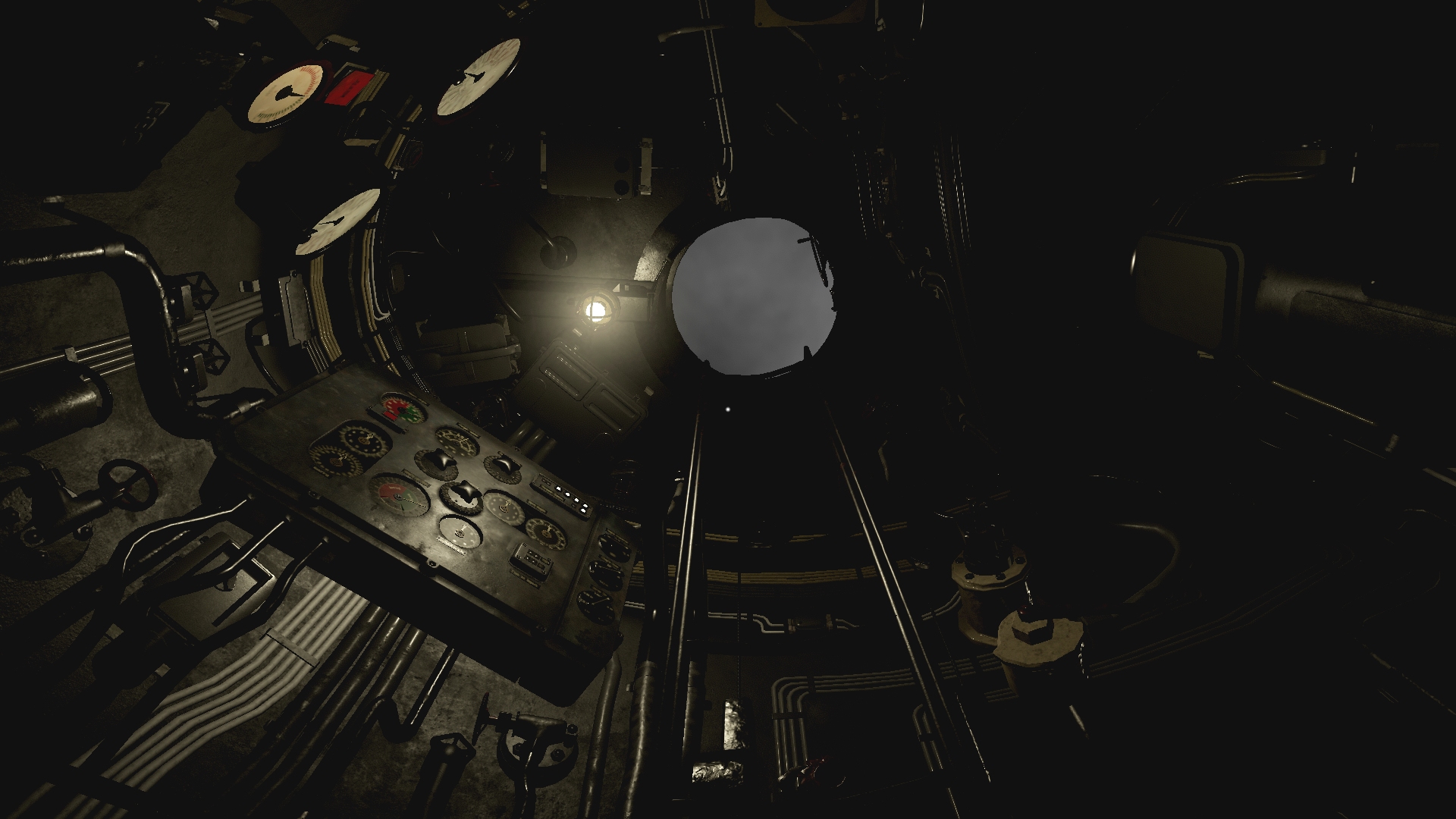 Lacking out-of-body views and well lubricated with the kind of alarming hull groans and screw songs that prompt nervous rivet inspections and involuntary upward glances, Wolfpack is a claustrophobia generator par excellence. The first time you're pinged by an on-the-scent escort vessel is unforgettable, your first depth charging a genuine rite-of-passage. 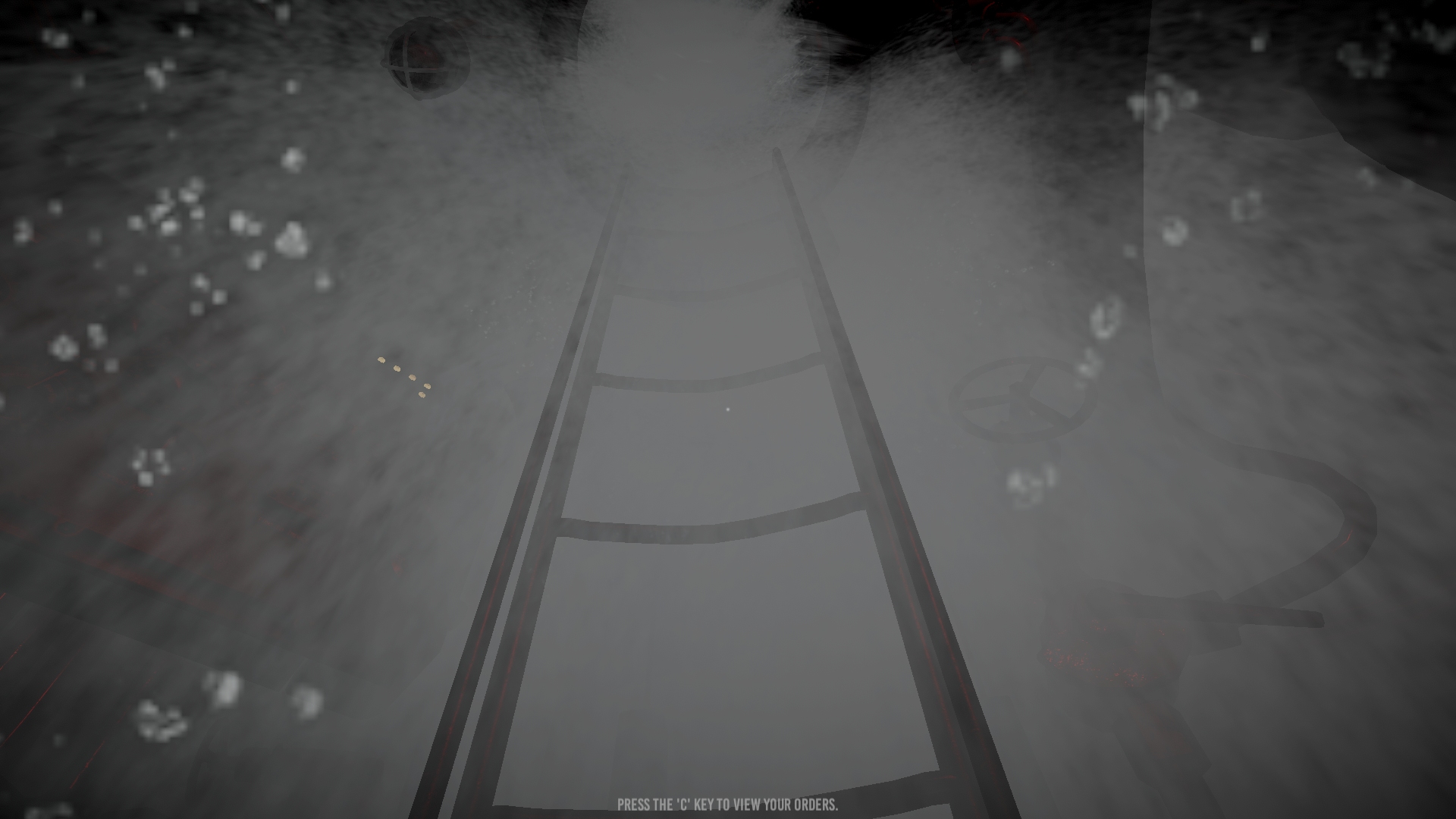 Having only experienced a handful of demises so far, all of which were swift violent affairs (I think I may have been rammed during my last sortie) I can't tell you much about damage modelling I'm afraid. Flooding is certainly simmed (Crash-dive with the top hatch carelessly left open and it's goodnight Vienna) and sparks shower from equipment from time to time but I've been too busy kicking myself and cursing to notice whether individual instruments and systems fail. Do subs ever stick in the seabed? Do corvettes understand white flags? Can incoming fire slay certain crewmen while leaving others untouched? I plan to find out over the coming weeks. 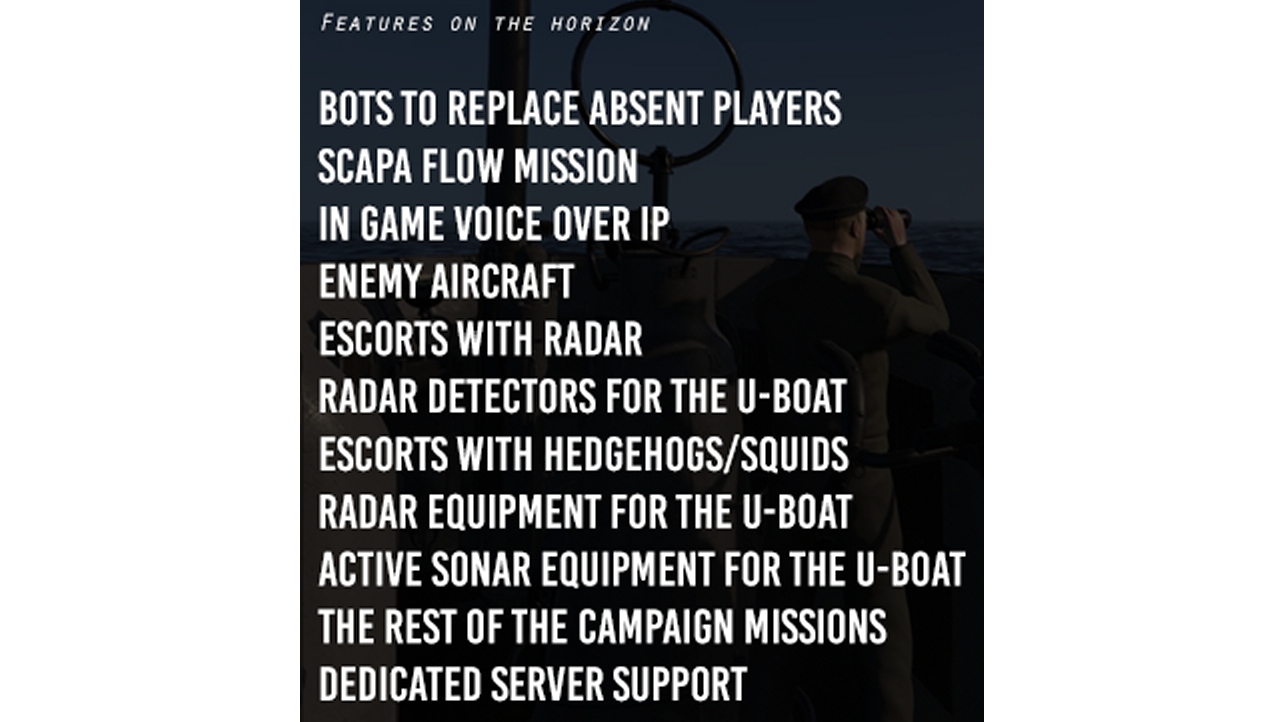 Those bots and the training missions that will form the early stages of the sim's SH2-reminiscent linear campaign should make Wolfpack noticeably friendlier than it is at present (Even seasoned sub simmers are likely to find the current manual a bit barebones). The last I heard, the campaign was to  span the entire war - chronological scenarios reflecting the see-sawing power-balance in the six-year Battle of the Atlantic...

Training: U-boat school (can be skipped). A mission in the harbor where you get a chance to practice TDC and torpedo shots with illuminated dummy torpedoes against friendly tugs and coastal ships. Your sonar guy will get some training on how the sonar, radio and enigma works, and your chief will get practice diving the boat, holding at PD, and surfacing.

1939: “My God! So it’s war with England again!” War begins, missions in the North Sea and around the British Isles. You will encounter warships, neutrals, and single cargo ships. You may encounter passenger ships and it will be your task to ID them and determine if you are within orders to sink them. If you sink an Athenia, you and your crew may be subject to disciplinary actions. As the year progresses, you will encounter more British warships trying to enforce a blockade, including RN aircraft carriers (fat juicy targets). You may receive orders to penetrate an enemy harbor, such as Scapa Flow (good luck with that!). 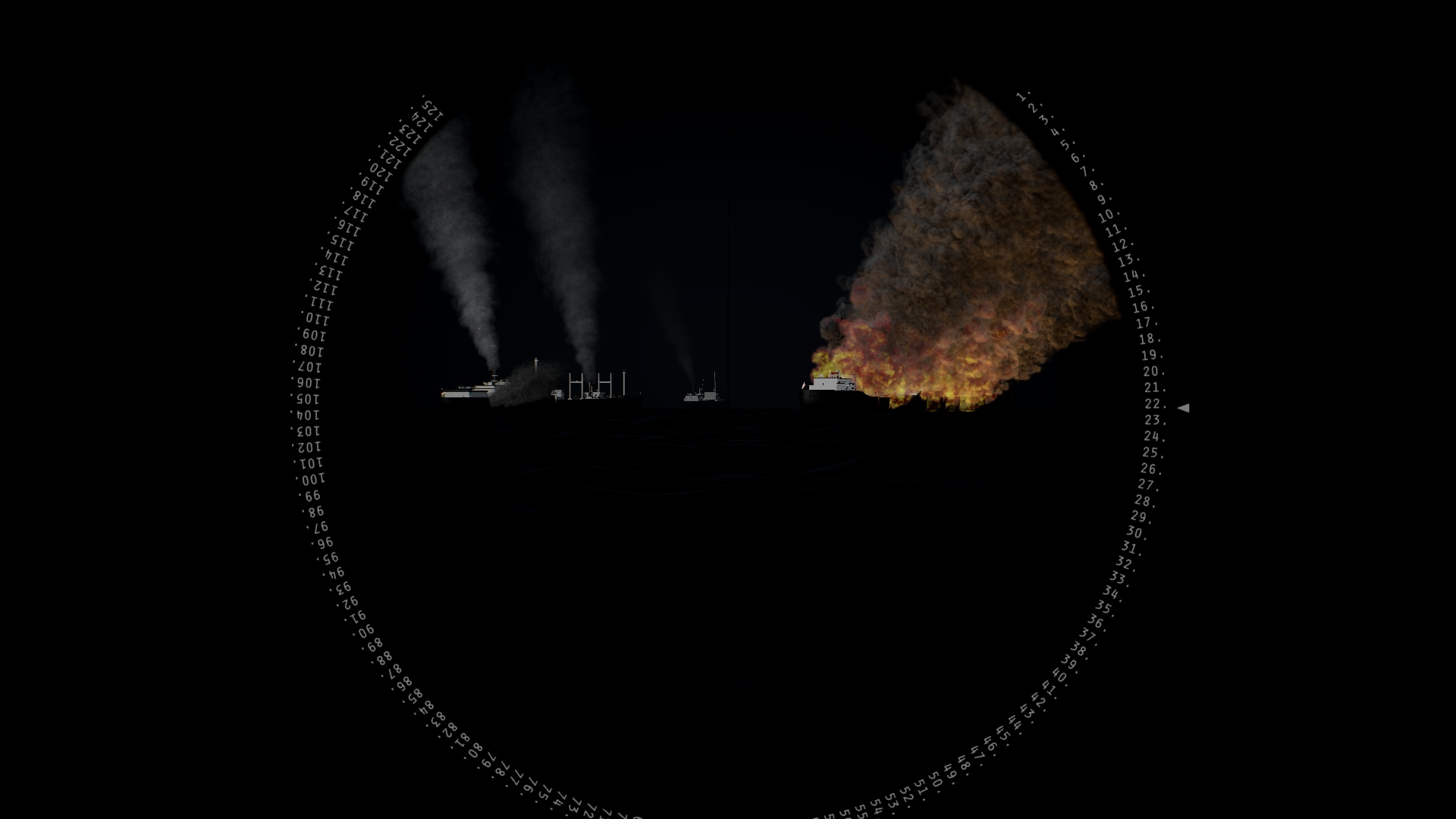 1940: Happy Times. You sight your first convoy. British ships have no radar so your surface raiding tactics at night will bring you glory, as long as you correctly gauge how closely you can approach ships. Weather and moon conditions will have an impact. You may experience occasional torpedo failures, you better have BdU look into it. You may be tasked with taking part in Operation Weserübung, the invasion of Norway, so watch out for waters heavily infested with escorts. After the fall of France, you may be based out of the French port. The Happy Times begin. Your U-boat is a force to be feared as you sink ships by the ton  Just be sure not to sink an American, even though they may be trying to sink you.

1941: Happy Times continue, but in March your radioman begins to get an alarming number of radio message from other U-boats that are sinking. Escorts get smarter. First tactical radar sets begin showing up. Operation Bismarck. You get your first taste of wolfpack tactics! Also, your first encounter with a Q-ship. Patrols in the mid Atlantic where Allied aircraft cannot follow. 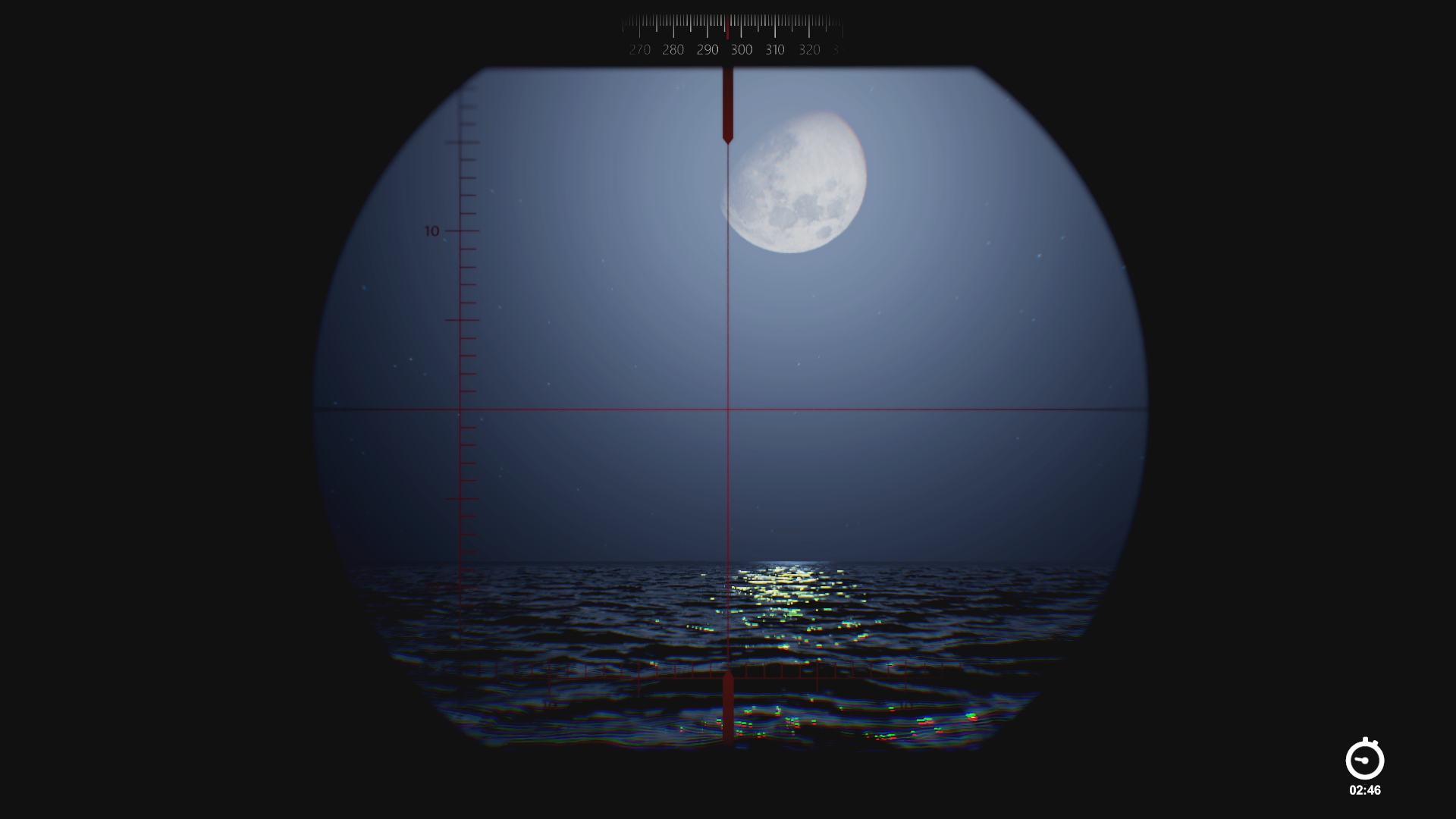 1942: America in the war, commence Operation Drumbeat. War on tankers. Happy Times are back with easy pickings off the eastern coast of the USA. Refuelling operations with Milk Cows. Transit across the Bay of Biscay becomes more hazardous with the unexpected appearance of Wellington bombers and other Allied aircraft equipped with radar and Leigh Lights. Metox detectors are quickly installed in all boats. America's defenses tighten up, and patrol zones return to the middle Atlantic. Patrol area shifted to attack Allied landing in North Africa.

1944: Desperation. Fat and GNAT torpedoes, Naxos are issued to your boat. Snorkel added to your boat. Allied defenses spell the end of the war for U-boats. Escort carriers hound wolfpacks. Orders to attack Allied landing ships in English Channel. Base of operations moved to Norway. 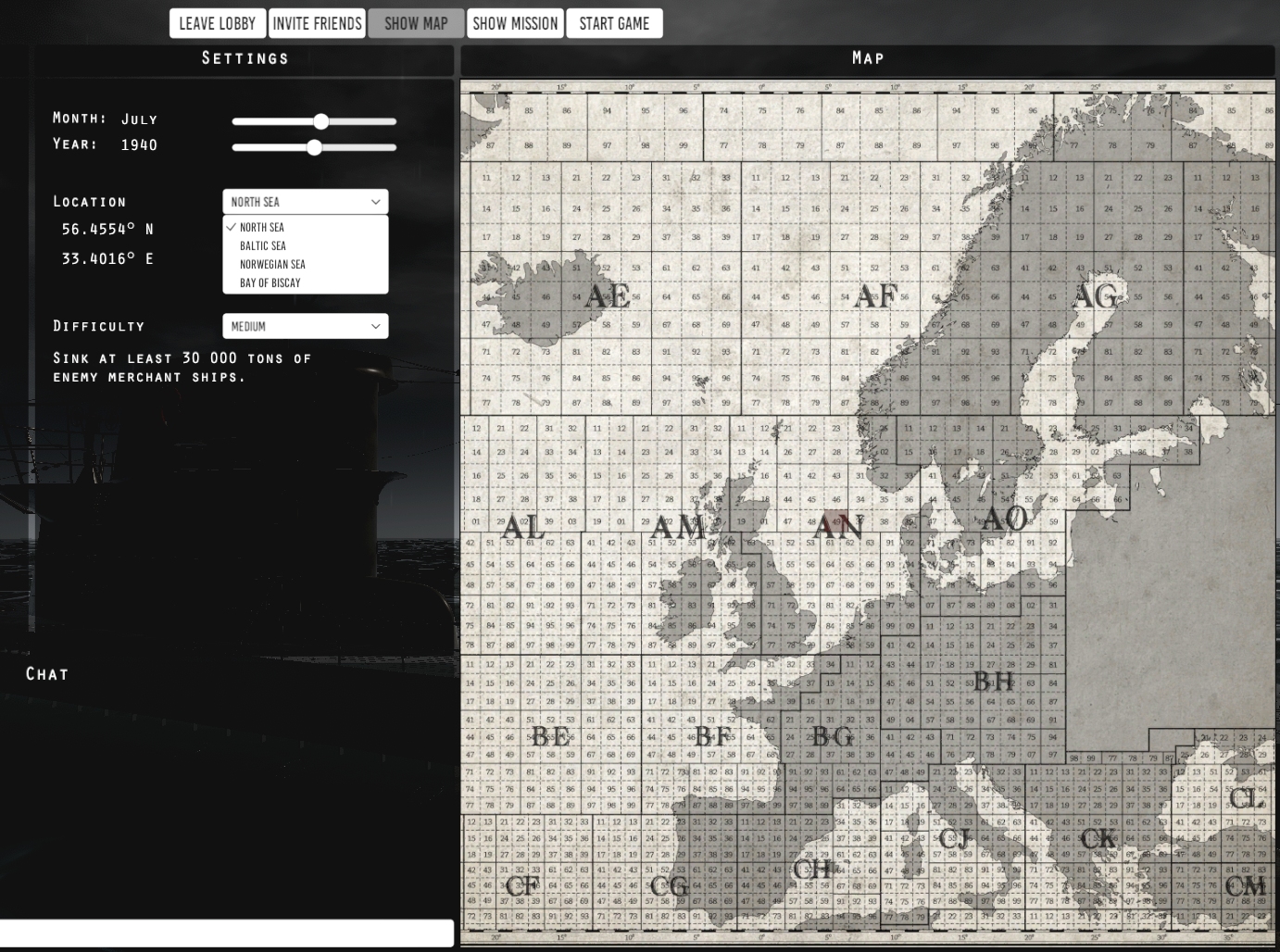 Obviously, to get the most out of a sortie sequence like that you'll want to share it with shipmates you know and trust. Skirmish games may be public or visible/accessible to Steam friends only so, presumably, there will be similar options with campaign jaunts. Those without Wolfpack-equipped chums will have to peruse lobby lists and chat windows for promising missions, or start their own games, hoping communicative strangers will jump aboard before things get too hectic. 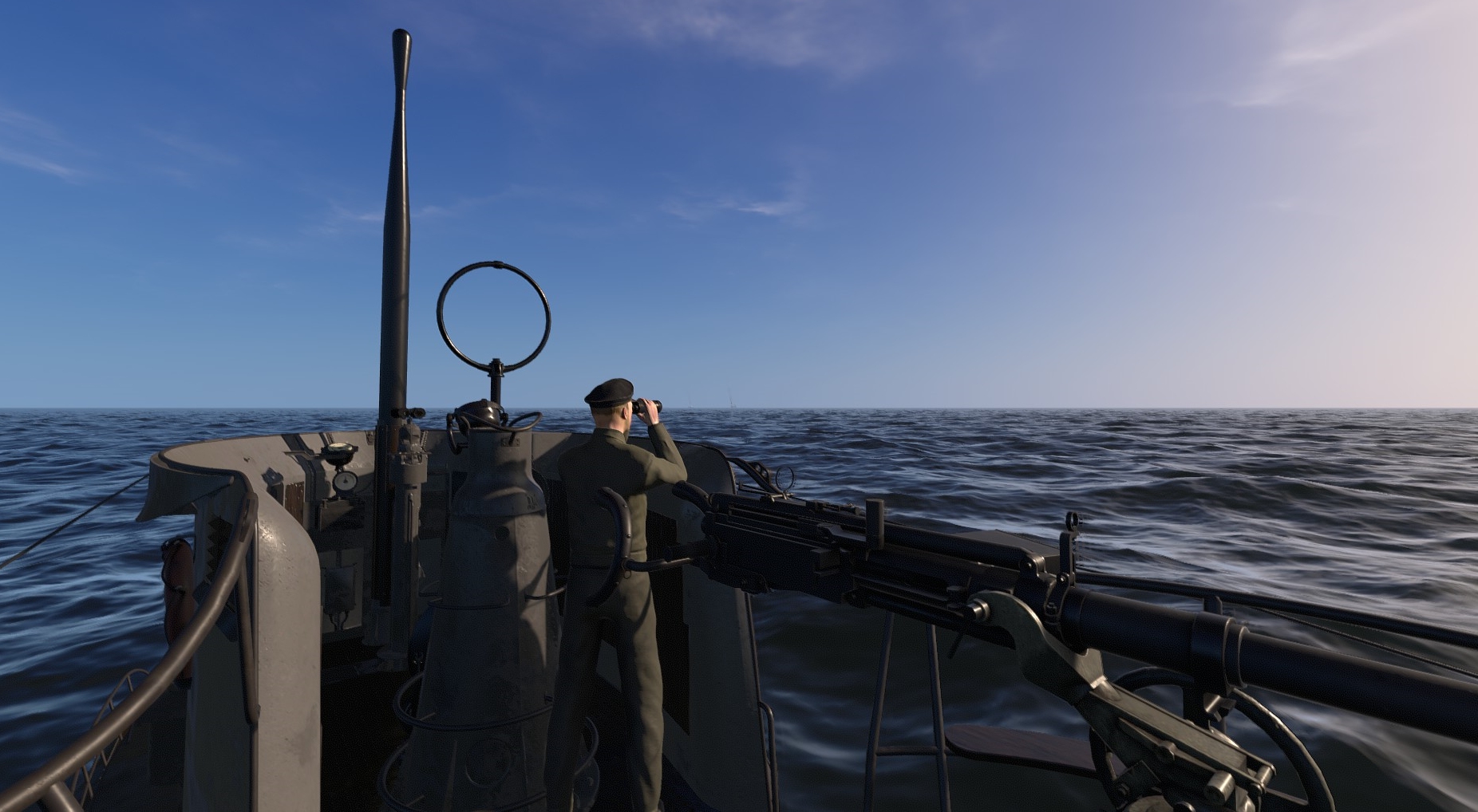 It's hard to imagine a sim as unusual and well executed as Wolfpack shrivelling for want of players, but it will be interesting to see whether the playerbase silos over time. I was lucky enough to share a boat with a patient old-hand during a recent game and the experience was far more useful than any manual or tutorial vid. Hopefully sea-dogs like my tolerant tutor will mix with the microphone-less public lobby hoi polloi now and again. Encounter a virtual Prien or Kretschmer early in your Wolfpack career and any lingering “I wish this was more like Silent Hunter” reservations will quickly vanish.