There's a drawing of Mario in the office. It's on the wall directly to my left, and whenever I'm plotting something I have to look at it so Matt and Alice don't know I'm scheming against them. I don't even like Mario, but now he's part of the process. That seems weirdly appropriate, because a lot of this week's selection is drawn from genres that I don't like, and yet I've enjoyed them anyway.

Yes, it's time once again for Unknown Pleasures, our regular selection of the best under-appreciated games from the unstoppable tide of new games on Steam.

It always frustrated me that I never got on with Descent, nor even its recent descendant Overload, much ador'd by Dominic Tarason. I think they felt a little dry somehow? In any case, Blast-Axis can't escape the comparison to the ancient 3D Doom but-what-if-you-could-fly-over-the-monsters shooter.

The basic idea, for those of you I somehow haven't alienated yet, is that you're piloting a tiny, nimble spaceship through enclosed areas infested with hostile flyers. There's a hint of arcade sensibility about BlastdashAxis, despite its dimly light mines. Lots of vibrant colours, fast movement, and plentiful ammo for your chunky, satisfying guns. Your ship has several gun mounts, plus a weak cutting laser that nonetheless has limitless range and power, and an alternative fire that charges up for a big zapping. They also have lots of ammunition types. In place of more guns, you switch each mount back and forth between fire modes and ammo, which also appeals to me for reasons I can't quite place. Added to the need to manage your heat levels, it feels a bit more like you're really operating a ship rather than just playing Doom, even though it's not a complicated one at all.

Where it's weak is the monsters. The ones I've seen have little to characterise them beyond being another form of blue shape. I'm on board with the colour scheme, and they do vary, but they're in need of more personality and audio-visual flair. I get that they're interdimensional aliens too, but the weapon effects are chunky and solid and they really deserve to cause more explosions.

I love the map overlay. Excellent use of a colour gradient to express distance.

Beat 'em ups don't exist, so it was a strange experience to play this. Ten fighters sign up for a series of one-on-one brawls in various configurations, usually an interesting best of seven rounds. Though that could sound gruelling, much of Fantasy Strike's charm comes from its accessibility, which extends to the health system. You essentially have a handful of hits instead of a granular heath bar, and each character has half a dozen attacks plus short, simple combinations ensuring that you can get the measure of them in a game or two. It also makes for brief bouts, so even up to seven of them can fly by.

You've got your basic attack, your alternative attack, and a ranged attack, plus throws, a one-button special move, and a few details aside that's all you need. It's impressive how distinct characters feel to play or face despite this. My favourite, Ninjaface (probably), is quick and very mobile - her "ranged" attack is hurling herself through the air to attack or escape - while one of the 'wild cards' is a judge who sends a ghost to strangle people. Probably not technically illegal, but still, poor show. Oh and one is a panda who... fills the screen with random casino items. God he's annoying. Don't be the panda, kids.

The other thing that's impressive: once through the thorough but slightly overlong tutorial, you'll quickly be hooked. It's clear and exciting and pretty and I was bouncing along to the music and losing was the good kind of frustrating - inspiring me to kick the stone golem's granitits of rather than give up. Excellent stuff.

Ooooh, I can manufacture a rivalry here. Okay, everyone watch the trailer.

Iratus is a tactical turn-based strategy RPG about being a necromancer. Given the tiresome zombie endemic, it's disappointing that there are so few great games about building and managing deadies, so perhaps I was biased, but Iratus is promising so far. You're an ancient necromancer, long forgotten, who's come back to wreak horror on the world with his undead army. This is done through a campaign map in a roguelike fashion in which you pick a one-way route out of several available paths, looting graveyards and shrines, and fighting groups of gross living humans in a manner that'll be familiar to anyone who's played the games I mentioned earlier.

Four vs four figures line up, compare their initiative scores to dictate order, and then take turns on a per-unit basis to slap at each other with swords, pickaxes, whips and so on. Inducing "insanity" (functionally morale, though I'd say "horror" is a better fit) is a specialty of some units, others are better at supporting friendlies by summoning ghostly clouds, undoing status effects and so on. If the enemy all die or flee, you move closer to your goal, and scoop up body parts for use in constructing more minions.

It's this part that's really important. I enjoy the combat as much as I do in Star Traders (although it lacks the wider story/character context, but that's fine, different games, different goals), but it's the possibilities you're given by combining the loot into differing monsters that makes this stand out. Compared to simply gathering money to hire more soldiers, it brings the theme to death to extend your power by stapling bones and leftover armour and vials of blood together to make a death knight, or settling for a skeleton because you're short on viable flesh. The tone is right too, neither campy nor dully serious, although I would suggest making Iratus' interjections a bit less frequent. They're great, but he pipes up a bit too often. I like that one upgrade for Iratus - both you and your stinky lackeys unlock powers by gathering experience points - makes him get more angry every time someone misses an attack.

It's currently finding its feet a bit in terms of balance - upgrading troops is clearly important, and even corpses aren't expendable, but it's rather easy to lose bodies here and there and given its roguelite edge, that could cost me.

UGH. God I hate you all.

The basic idea of the deckbuilder, those of you lucky enough to evade them, is you have a character (or sometimes an army) whose abilities are represented by a deck of cards that do damage, heal you, or do fancier stuff. You do battle against rivals or monsters in turns, drawing a handful of cards from your deck, and much of, if not all your loot is more cards that you can add to your deck. They're very common and perfectly valid and I hate them all. All of them. Fate Hunters survives the dreaded trials of Unknown Pleasures by virtue, again, of its accessibility. Where a great many deckbuilders are way too esoteric, I was up and playing and understanding what was going on immediately here.

That may be because it's fairly simple, I'll admit, but it's definitely a strength here. You go through a series of rooms, most filled with a small handful of monsters. Kill them all and you get a choice of cards to take, or ignore. Repeat this enough and you'll level up, adding special cards to your deck, and eventually reaching an exit. Here you can move further into the dungeon for greater risks and rewards, or cash out early, using that money to unlock other characters or starting cards.

Treasure is an interesting consideration - some cards serve no purpose but to grant more gold if you make it out alive, making them a liability when they come up in battle. I like to picture some bungling clod fighting by rummaging through a massive handbag, clutching at something that feels vaguely weapony and realising too late that he's waving a stick of rock at a troll.

It could do with more differentiation between levels and rooms, and the terminology around discarding and draw piles and so on wasn't clear upfront. But I respect that the cards are simple and clear, and explain what they and enemies can do. I even like that they tend to be limited to one or two bonus effects or special abilities, rather than overcomplicating things. I wanted to have another go when I died, and that's pretty conclusive.

Puzzle games continue to humiliate me by exposing the limits of my backwards brain. Here is a concept so simple that it barely even uses a third of a controller (the keyboard controls are needlessly rubbish, although there are at least so few of them that it's surmountable), and here is the mangled shell-strewn yolk that is my brain on that concept. You get around the level by walking, and by rotating the level through 90 degree increments with a simple button press. Left or right. It's that simple. And yet I am completely this kid when playing it.

My own clumsiness aside, this is a game that could do with an undo button. One of the most important elements of a puzzle game, I will continue to champion, is the solution gap. That's the gap between realising what you need to do to solve the puzzle, and how much time, busywork, and/or sheer hassle it takes to enact that solution. It must be kept as small as possible, because that gap is where you lose most players. This one falls short a bit (made much worse by my own ineptitude) because it's so easy to tilt the wrong way and accidentally squish yourself or scrape a deadly spike, which forces a restart of the whole level. That can be a bit more frustrating than I'd like, particularly if you're the kind of puzzle player who wings it a bit or meanders their way to an answer rather than analysing upfront.

That doesn't fatally undermine the game, fortunately, and Alien Escape is a cute wee thing and not cruel or obnoxious. Rotate the levels to get to the exit, either directly or first manipulating crates to fall into the right places so you can avoid the spikes or reach up a bit. I find the bits where you stick on gravity-defying glue oddly enjoyable.

Pick of the week: I'll be looking out for Iratus with optimism. But Fantasy Strike has otherwise walked it. 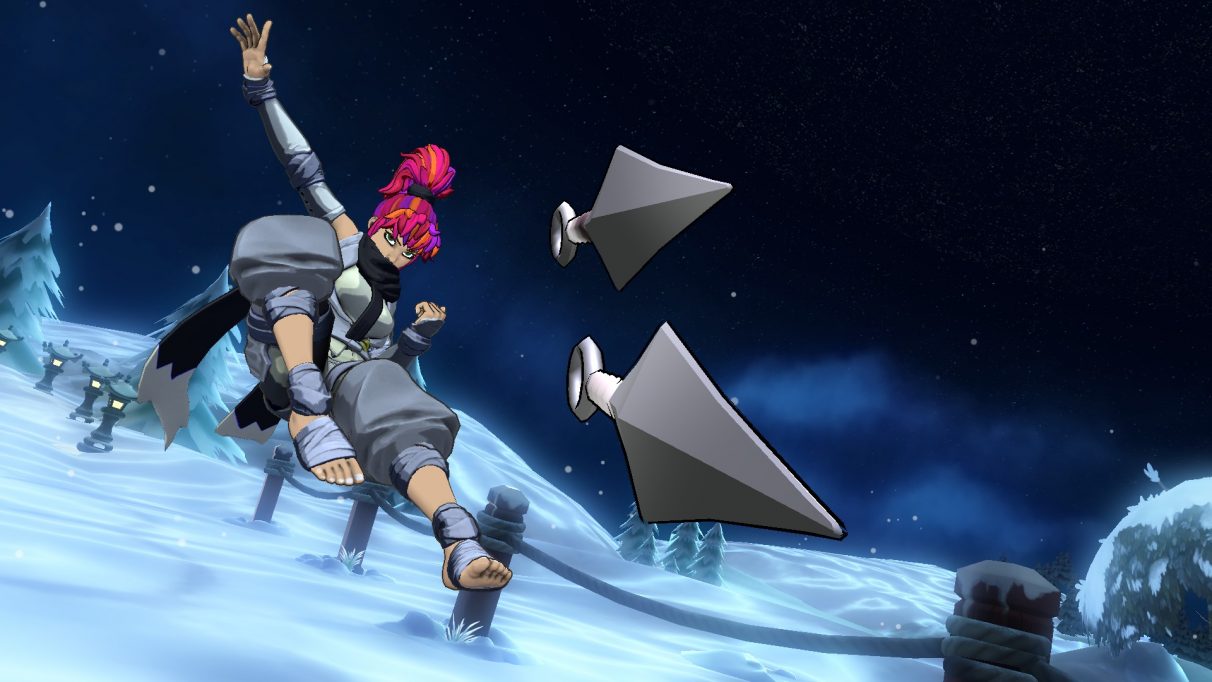 Many of us have an ambivalent relationship with beat 'em ups, and a lot of that is down to how elaborate they often get. I even wavered, if I'm honest, during the tutorial, which tried my patience a little despite being one of the better ones I've seen for a fighter. That was swiftly forgotten though: Fantasy Strike is an outstanding game and one I wouldn't hesitate to recommend to anyone interested in a 2D punchfest. The style, the well-differentiated characters, the ease with which you can pick it up and get a few wins in, while still being challenged.