Argh, yes, hello hello, intro intro, words, excuses. Sorry everyone, I've been rather ill and all the game devs selfishly decided to keep releasing their games anyway. Do they not KNOW what HAPPENS to troublemakers in the Unknownatorium?

It is, of course, time for a belated Unknown Pleasures, our regular selection of the best under-exposed games on Steam.

Good game design, like most forms of media and entertainment, is often about taking away, not adding. Dark Zone Defence-with-an-s takes away a stick from the twin stick shooter. That's been done, but then it always takes away visibility of most of the screen. You're manning a turret in a pitch black area, with only a thin torch beam and a tiny radius of light around you visible. And the monsters are coming.

Each monster looks and acts differently. Some move faster if you shine a light on them. Others burst into smaller sub-monsters Asteroids-style when killed. Some teleport on taking damage. Each wave sends a variety crawling towards you, and between waves you can choose a new gun to fit in your two slots, a passive bonus (a percentage chance to block one hit, a wider torch beam, etc.), or a recharging special power. The guns and powers are varied enough to change your game style a fair bit. The weapons aren't super satisfying but they're fine. Flamethrowers, grenade launchers, and burst fire lasers all have their advantages and drawbacks. While the special powers are pretty generous, using them at the right moment can be a tense challenge - fire off that momentary invulnerability to neutralise that mega-crab might cost you if you manage to kill it in time anyway, or if something even worse is right behind you.

That's where DZD really nails something, I think. While you're mostly blind, a blinking light atop your turret will turn yellow and then an alarming red when something gets closer, and while many monsters make a distinct sound to give you a chance, that warning system is both useful and excellently panic inducing. Everything can hurt you, but does the red light mean you can whirl around and quickly splat a weak little maggot, or have you neglected something far scarier?

I'm skirting a thin line in recommending this one because it does a few little things that chafed at me. It's a side scrolling looty shooter about zapping into random missions to blast heretics in a sort of cyberwasteland. Missions are randomly generated, but largely work the same way, as whether you're assassinating specific brands of enemy or hacking x number of computers, you'll be running around blaseting everyone anyway. It's hectic and fast-paced, and I found it difficult to avoid taking a lot of damage (but the character class I chose could periodically drain enemies of blood for a health boost, so this wasn't fatal). But that seems to be fine, you're not judged for it.

Success grants new weapons, armour, or spare parts to upgrade or unlock more of each, in a sort of Borderlands-y random way. Gradual, incremental improvements are the order of the day, but you can immediately up the difficulty of the missions on offer for greater risks/rewards, and more skilled players might find the grind less grindsome (there are a good dozen difficulty levels, and more varied enemies appear as you move up. You can move down too if you fancy an easier ride for a while).

The weapons I've seen so far are on the similar side, and I found it awkard that when you complete an objective, a portal forcibly teleports you back to HQ even if the screen is still full of people you're in the middle of fighting. I suspect this will get better the more you play it, but I'd be more wholehearted about it if I could choose when to leave a mission, and get some more distinct guns early on.

I am absolutely here for a conversation about what is and isn't a Soulslike. For example: Brume isn't a soulslike, because it's good.

It probably isn't anyway, but there's definitely some common ground, as your mystery warrior marches about a desolate, but also quite peaceful island fighting monsters, goblins, and witches. It's very pared down, as there are no stats save for weapon skill (gained in each weapon by using it more), fewer enemies and less grind and focus on complicated battles and dutifully studying for your Master's degree in fighting one specific enemy just so you can see a slightly different shade of grey for a while.

Brume is oddly nice. You dodge and block and swing at enemies, and hoover up their blood for healing (which I'm pretty sure is going to come back to haunt me narratively at some point, thanks to the sinister amulet that makes it possible). Its visuals are akin to lots of artsy games that, truthfully, I often find dull, and it's interesting to see them applied to something like this. I really like how your character's walk animation is weirdly straight-legged and faintly comical. It keeps things from feeling too serious, and the ambiance of the land and its snowy, bright atmosphere feels strangely like one of those lovely cold autumn/winter days.

It's a bit easy to get disoriented, and I've had a couple of encounters where I'm not sure if I'm just too weak for, or I'm supposed to slowly chip away at for ages.

Another side scrolling action game, but this time a super cute one that crosses early 90s-style arcade shooters with a block breaker. You're Racketboy or Racketgirl, and you're to fly about a series of levels defeating nasties by whacking their projectiles (and sometimes bodies) back at them with your tennis racket. Big grumpy-faced blocks are often in the way and must be destroyed or bypassed first by bouncing the 'balls' at the right angles, and the screen often fills with happy bananas and squeaking chipmunky things that you can also bash around.

It's really delightful, and at first I thought it'd end up as a kid-oriented recommendation since it was very forgiving - I assumed that letting a 'ball' get past you and leave the screen would be penalised, but it's all good. Within a few levels though the difficulty picked up, and it soon knocked me out of my complacency with moving blocks that squish you, and screens full of deadly bolts and distractions and limited areas to move in. Losing didn't feel too upsetting though, as the whole style of it is so friendly and silly that I couldn't get cross.

The first boss is a big stroppy banana, and every other level you get access to a little animal friend who can fire off lasers or an area attack, and sacrifices itself if you get hit.

The screen gets very busy, and I found it easy to lose sight of an enemy attack ball in amongst the clusters of stars you collect from defeated foes. Its local co-op mode could be a really good laugh, but there's a lot to enjoy here even playing solo.

Gravity, my oldest foe. You are BIKELOR, mighty uberborg of the cyclist collective. Or you're just some rando who wants to absolutely hack it down some mountains for no obvious reason. Lonely Mountains Colon Downhill is a series of winding downhill courses that challenge you to pedal and twist and sometimes jump around boulders and foliage in your eternal quest to become the best at rolling down mountains for an unclear purpose.

It just feels pretty good, really. The mountains are nice looking places, with faintly lego-looking trees and gently angular rock faces to swerve around, or more likely smack into dozens of times as your bones splinter. It's tricky. The camera is a bit too zoomed in for my liking, as obstacles can surprise you or occasionaly be a bit obscured, making some degree of memorisation necessary. You must also actively choose challenges on each course (ie: time limits and avoiding crashes) before starting for them to count, rather than them simply being awarded if you pull them off while practicing. That bothered me a wee bit but it's probably too petty to count.

Controls are appropriately simple and responsive, and although the keyboard works I found a gamepad much easier to handle the fine adjustments needed to flit through narrow gaps.

I love that you can find shortcuts by recklessly charging off edges, but the line between a viable bounce or wobble and an instant skeletal implosion is difficult to make out.

Pick of the Week: Dark Zone Defense was a lot more captivating than I'd expected. But I think Brume wins this round. 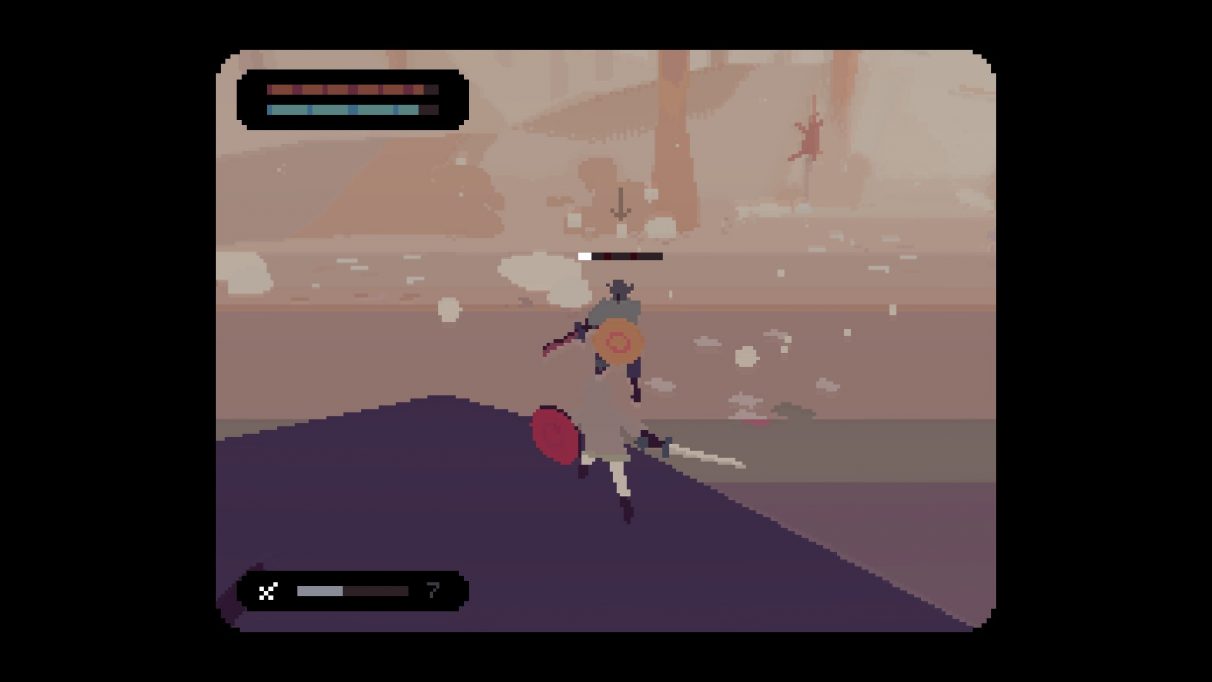 Whether it's making combat so simple and doing away with most of the soulsy trappings, or making a slightly walking simulator-y game so fighty is hard to say, but the middle ground it strikes invites you to keep playing rather than antagonising or demanding patience. I like its mood, I like its look and the way it moves, and I like that I have definite questions and suspicions about what's going on story-wise, but that they take such a backseat that I won't mind much if it turns out they don't matter.